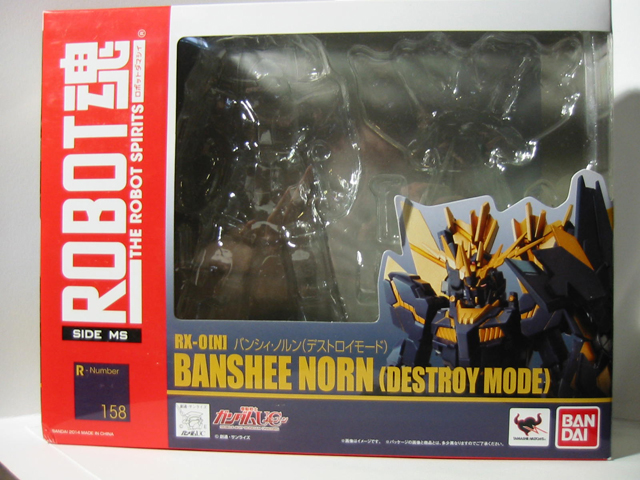 Piloted by Riddhe Marcenas, this variant of the Unicorn Gundam 02 Banshee is introduced in episode six of the Mobile Suit Gundam Unicorn OVA series. This version (refereed to as Banshee Norn), ditches the Armed Armor VN (claw-like weapon) and Armed Armor BS (fin-like weapon), adds more stuff to the shield to make it bigger, and adds various fins on its back. This review is of the Destroy form (open panels and more Gundam looking face). There was a Unicorn form of the Banshee Norm released last year. 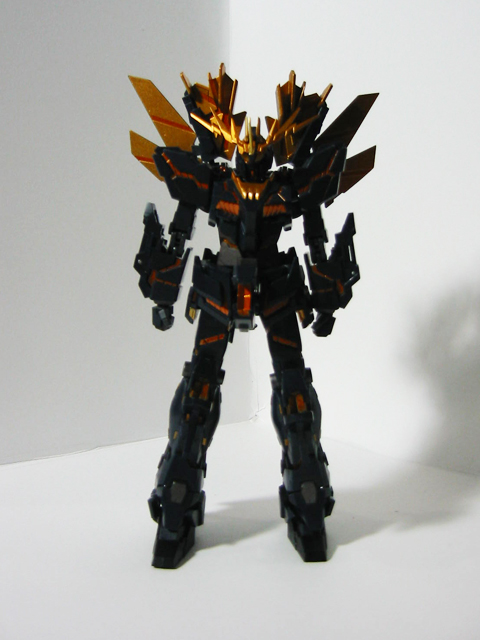 Standing five inches tall (a bit bigger than the usual Robot Damashii Mobile Suit), this dark blue (almost looks black) variant of the Unicorn design is impressive looking as it is fun to play with. 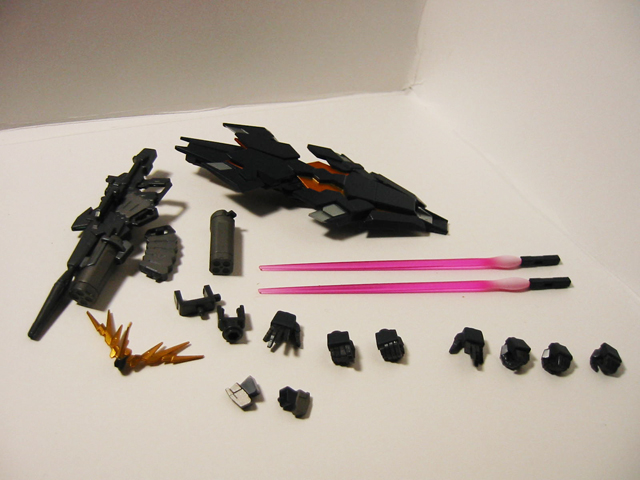 While the Banshee Norn does not come with as many accessories and other Robot Damashii (some of the other Unicorn Gundam releases have some crazy number of weapons), it still has a satisfying amount of parts. You get the following: Beam Magnum with Revolving Launcher, extra Revolving Launcher and extra E-cap (both plug into the back shirt armor), four pairs of hand with one extra for holding the side handle of the Beam Magnum, two beam sabers with hilt, PVC version of the V-fin, shield with extra bits on it, attachment for Tamashii Stage and standard two little bits that are meant to attach to the other Banshee Norn Unicorn mode. 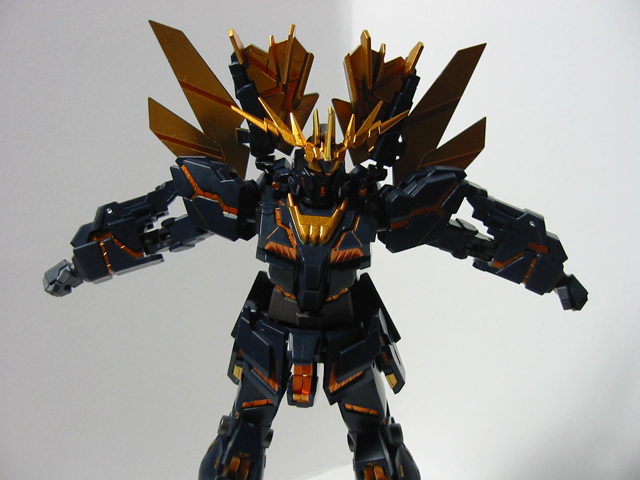 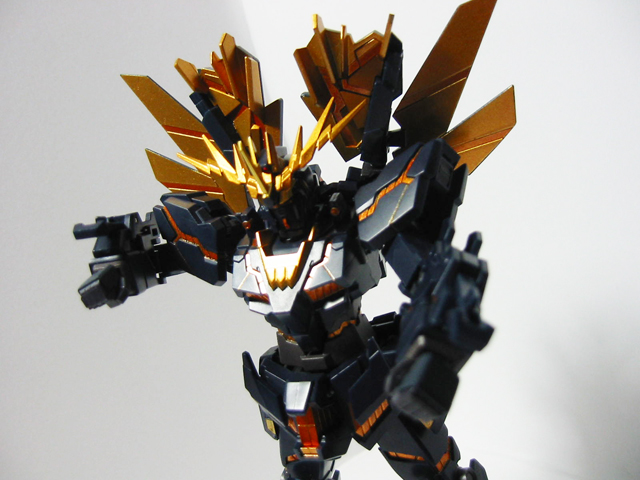 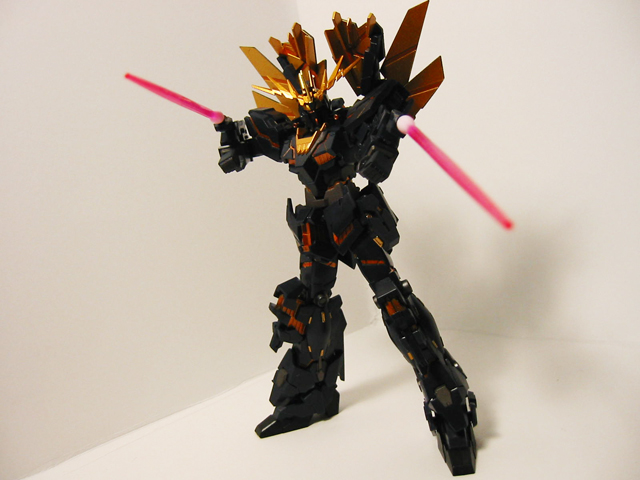 Articulation on this toy is bonkers. Shoulders extend out. Elbows are Double jointed. Panels open up on the arms, and you can place the beam sabers there to make beam tonfas. 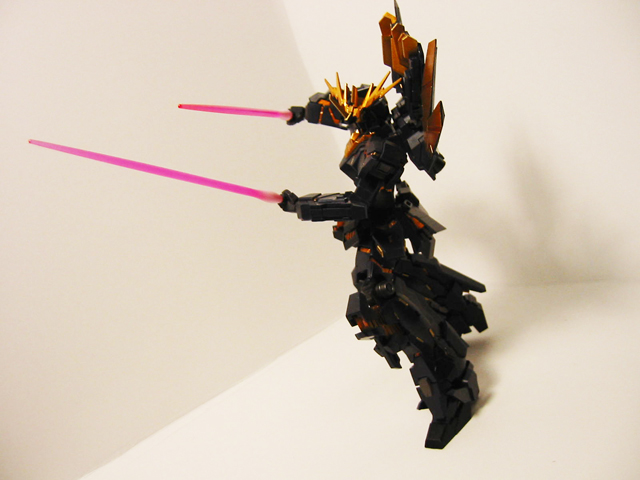 Of course it can also hold the beam sabers in its hands as is the norm for Gundam. 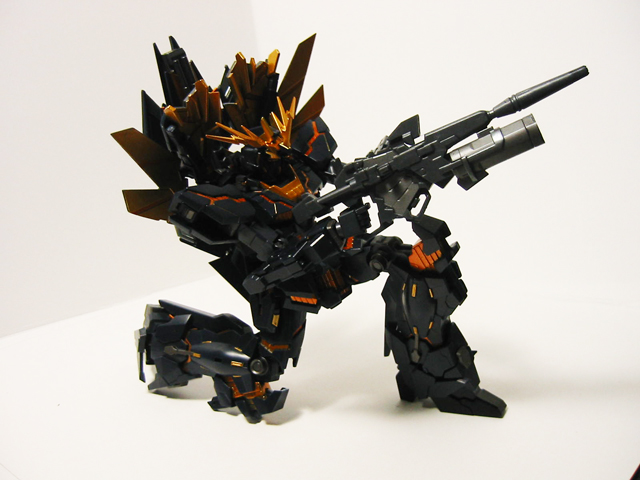 Toy can perfectly kneel with toes point back. 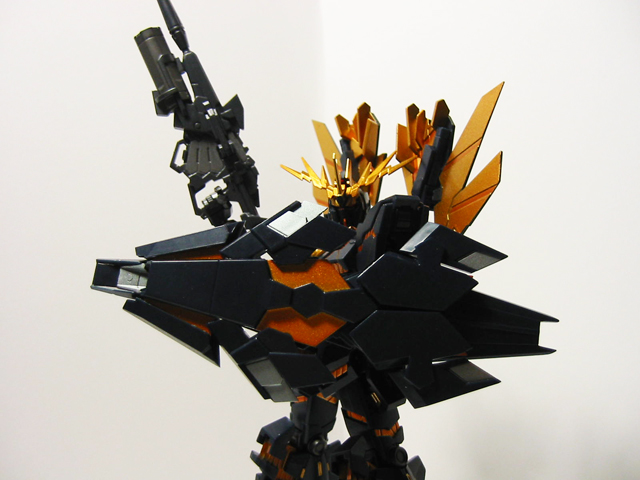 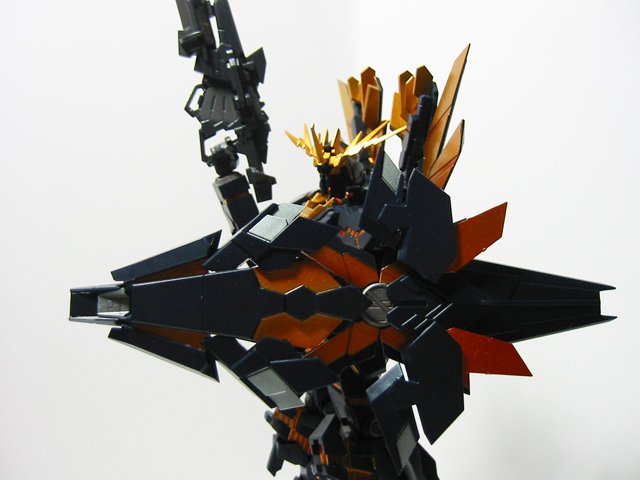 The Shield can kinda close up but not all of the panels close, so you’ll have to acquire the Banshee Norm Unicorn Mode if you so desire a fully closed shield, otherwise leave it open. 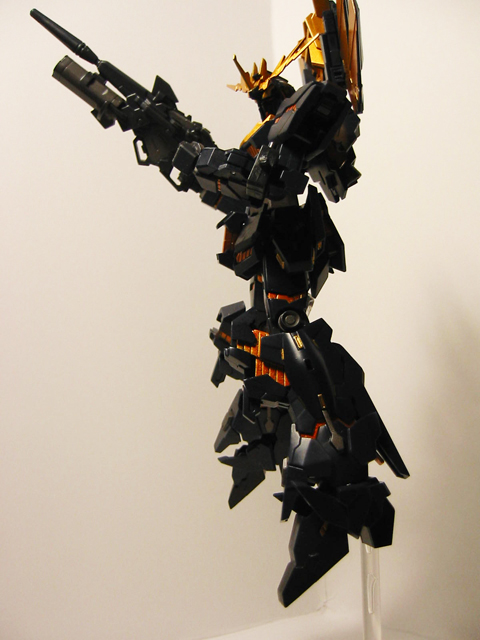 I don’t have a Tamashii Stage stand, but a figma stand will do just fine to show off the special gimmick. 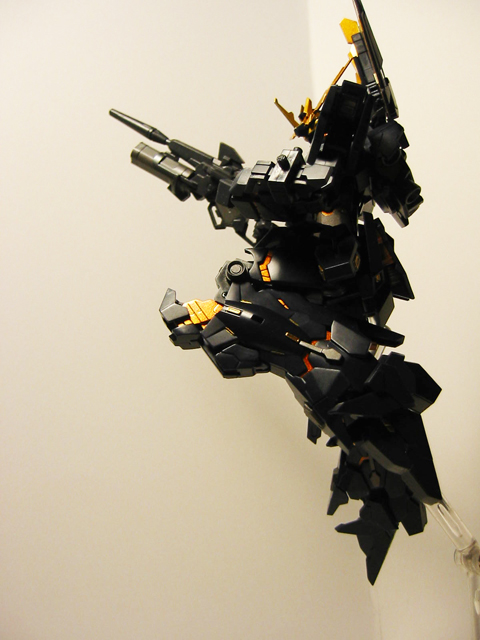 When you bend the knee, a section of the lower part bends along with it. Panels on the back of the leg open up as well to reveal rockets. Very nice! 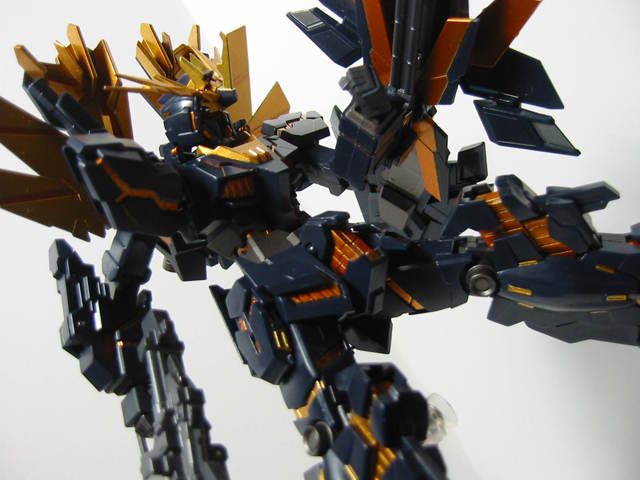 While it doesn’t really twist that well by the waist, it does have ab curling articulation, which is a nice trade off, I guess. 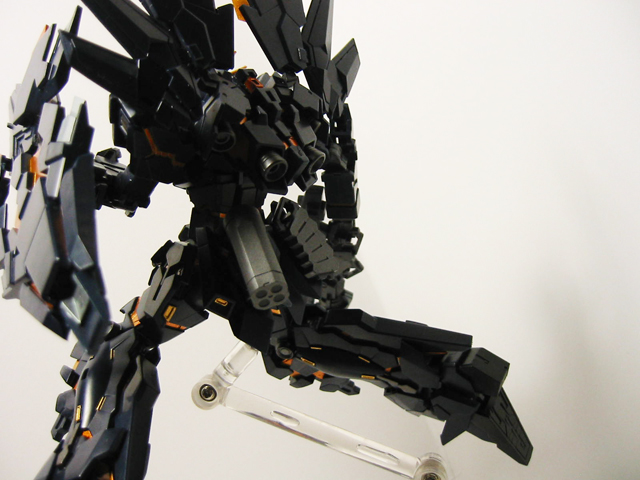 The extra Revolving Launcher and E-cap plug into the back skirt armor. The Beam Magnum can also plug into the arm or back, as can the shield. 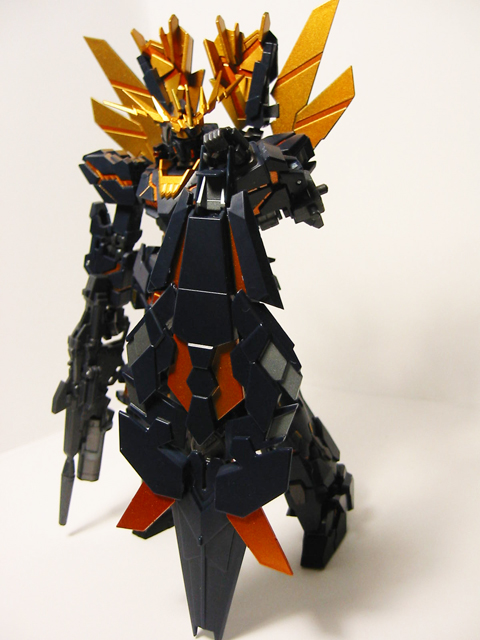 A little panel on top of the shield can open up so it can hold it from there too. 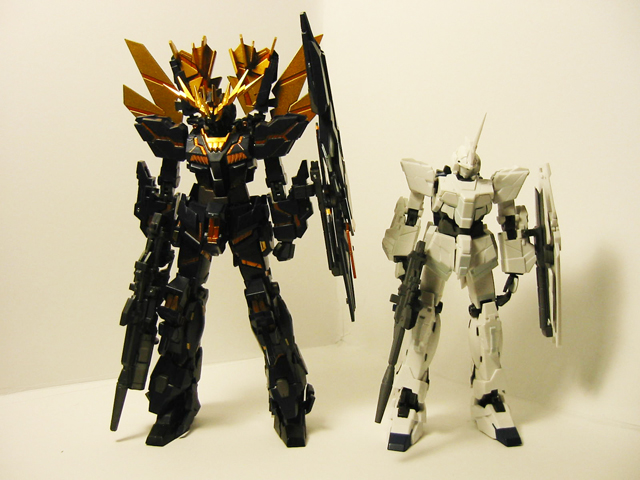 Finally, a comparison with the first Unicorn Gundam (Unicorn mode) because that's the only other version of the Unicorn I have (it’s since been updated so the scale between the two is off). 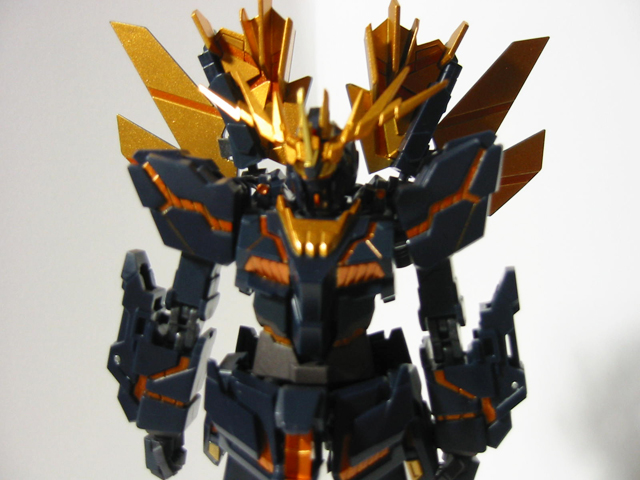 Overall, while maybe not my absolute favorite Robot Damashii (GM Sniper II is), it’s still quite an excellent figure of a neat design with plenty of gimmicks, although I think in order to have the most fun out of it, you’d need to acquire the Unicorn version of the Banshee too.

Thanks to Blufin for this beautifully crafted figure.

Buy one at BBTS!

The extra plates on its back are designed to resemble a lion's mane, completing the story's allusion to the 'Lady and the Unicorn' tapestry that plays into the plot.

Ah, that makes sense. Thanks.