This time we take another look at a grunt suit. The R-Blade first appeared in SRW Original Generation 2 for the Game Boy Advance as a mass production version of the R-1, removing the latter's transformation/combination abilities. While the suit is anglicized as 'Arblade' in Japanese promotional materials, it appears as R-Blade in the English translation of OG2. I'll be sticking with that spelling, because I think it's funnier that way.

I couldn't find an HD video of the R-Blade in action, but at least this one comes with a healthy dose of The Little Sister.

The R-Blade is FAF number 29 of 33*, and it's also the highest numbered release that I have, at least for right now. I've learned that you can't use any one release to try and get a sense of this line, but as the R-Blade is is basically the last 'real robot' FAF, there's a personal interest on my part to look extra hard for any indications that the line evolved. Like, at all.

The box is new, at least for these reviews. The line got a classier upgrade to the packaging starting with FAF 24. 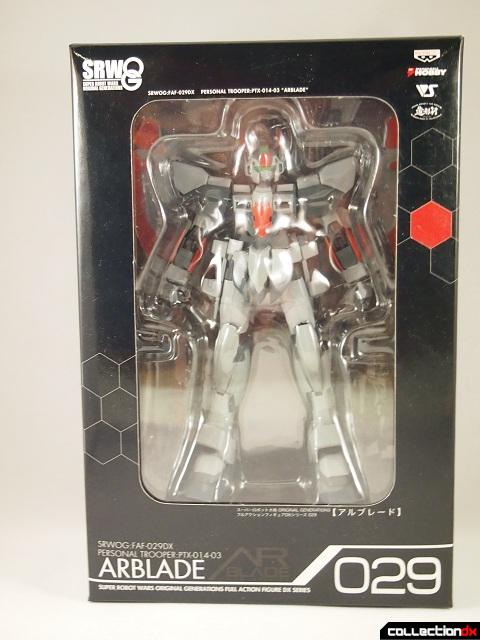 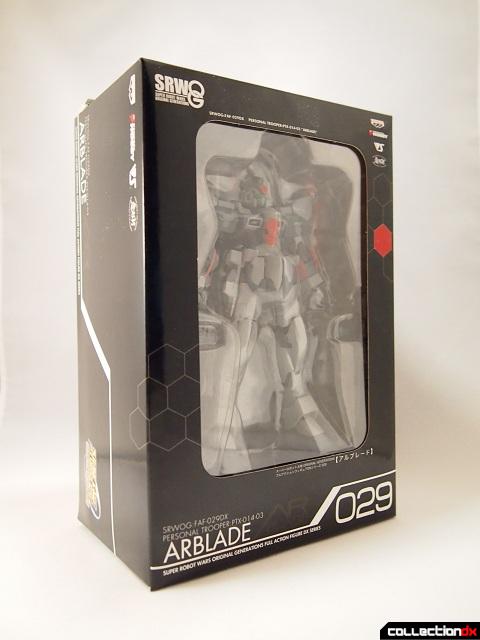 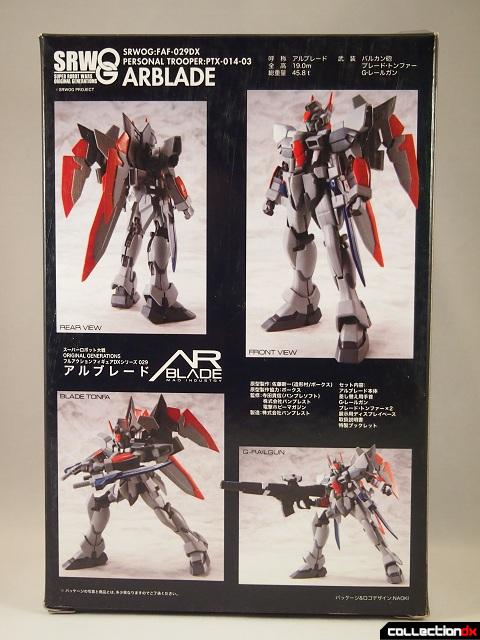 There are only four colors used on the R-Blade's body, and the majority of it is done in two shades of grey. I really like the effect; the limited amount of orange gives it the look of a training unit. 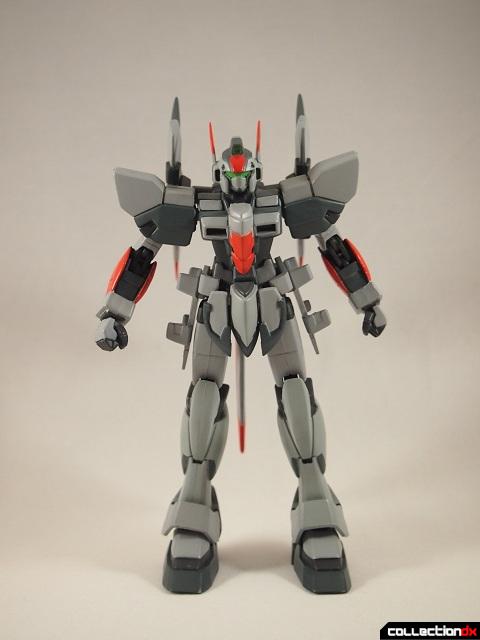 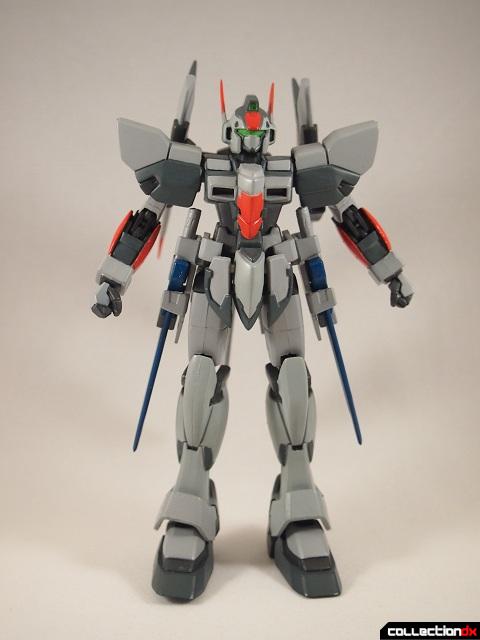 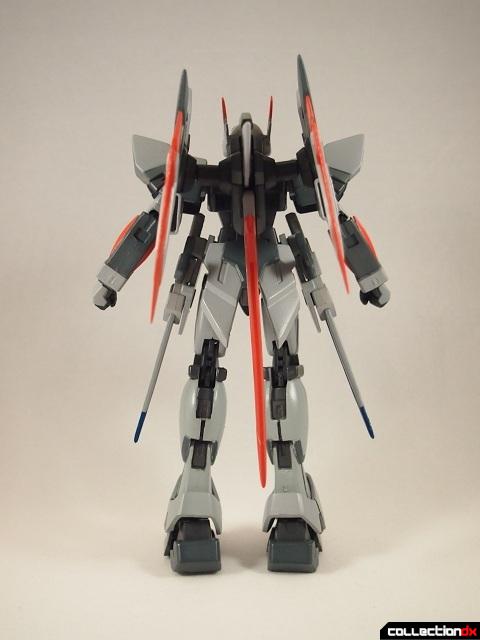 The paint is more or less the same story as on my other FAFs. It looks fine at a distance, but on close examination you'll see a lot of brush strokes and areas of overspray. There are a couple paint bubbles and other imperfections as well. What do you call flash but when it's paint? Because there's a lot of that here. It's got the usual waxy finish, although it's nowhere near as gross feeling on some of my other figures. 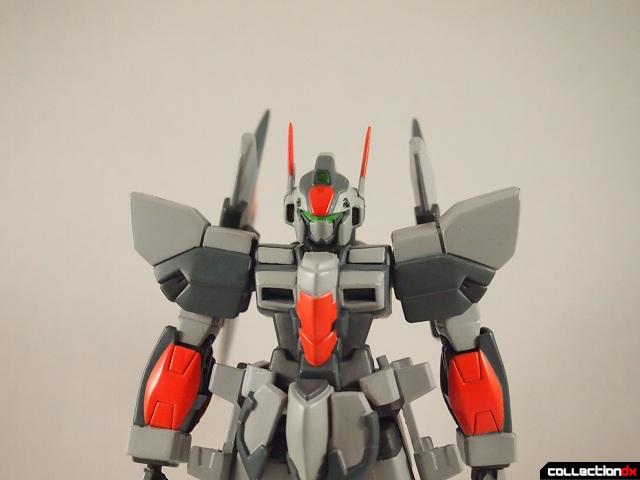 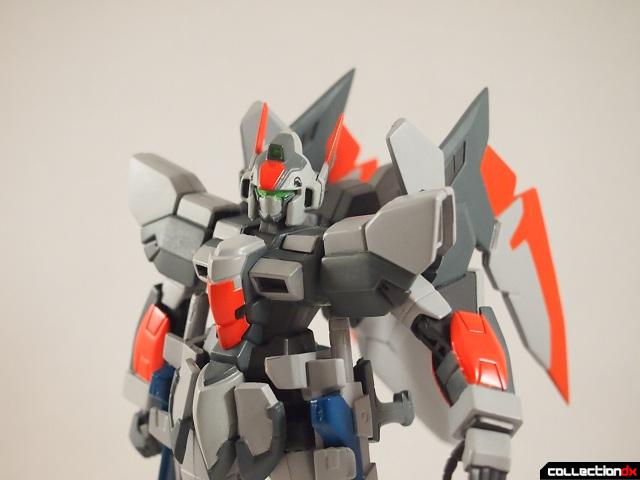 The main fin on the backpack can swivel for about a 50 degree range of movement, and the side assemblies attach by means of polycap. It would have been nice if the smaller fins could swivel as well, but once you start thinking about how this line could have been better you go down some dark roads, so let's not. Also the small fins are really sharp. 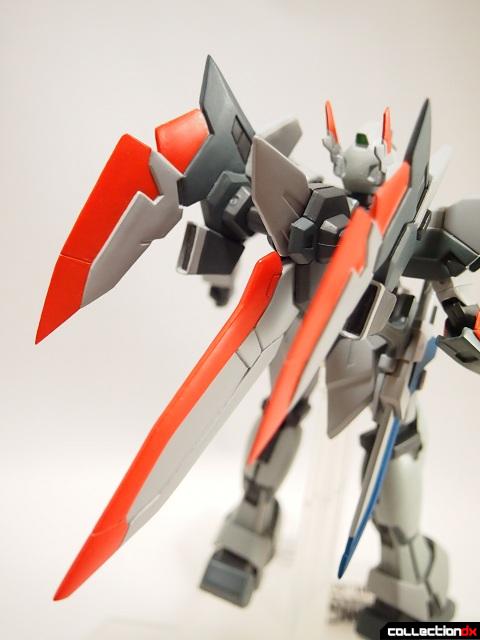 The articulation setup is fairly standard, with Volks' usual double jointed elbows and knees, but because the R-Blade is fairly slender it can actually benefit from them, and these joints turn out to be fairly capable once you don't mold over them. 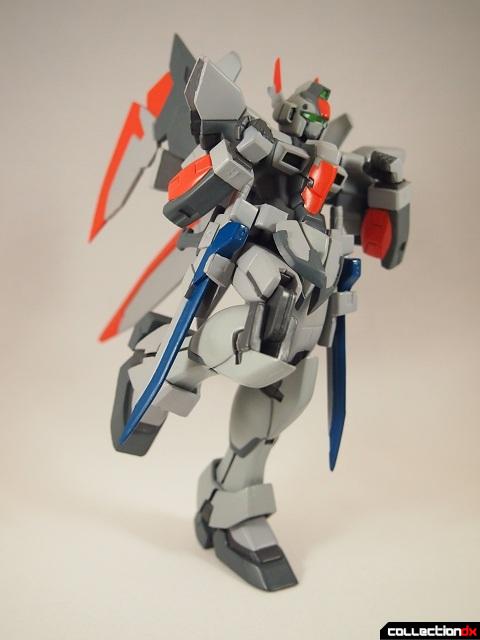 The shoulders are still immobile pieces that peg straight into the torso, so there's no way for the R-Blade to reach across its body. The arms connect to a swiveling polycap built into the shoulder, so they have a satisfying range of lateral movement. The swivel is pretty stiff though, and the arms often end up popping off. 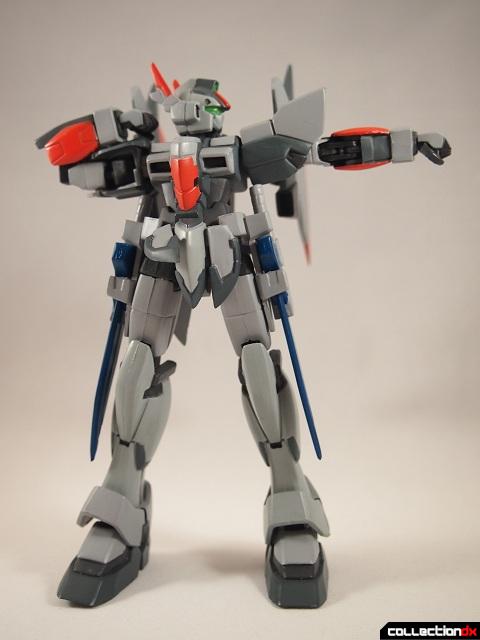 There is a waist swivel, but it really can't move at all due to the hip holsters. It seems that the feet in this line swing back and forth between being jointed or not, and the pendulum lands on 'not' for the R-Blade. There's some cool recessed detailing underneath there though. 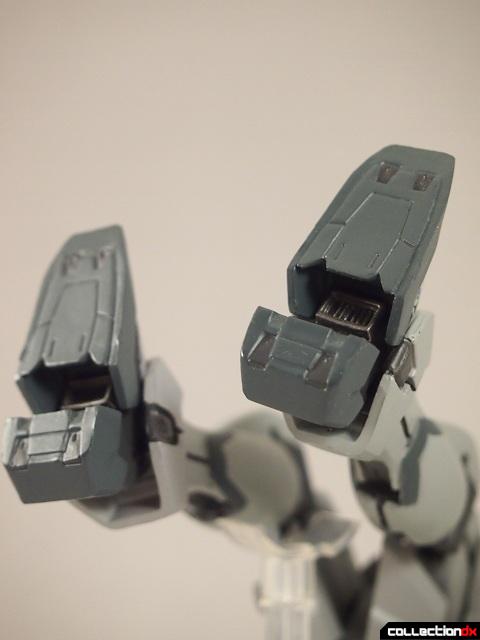 Now to take a look and the weapons and -- 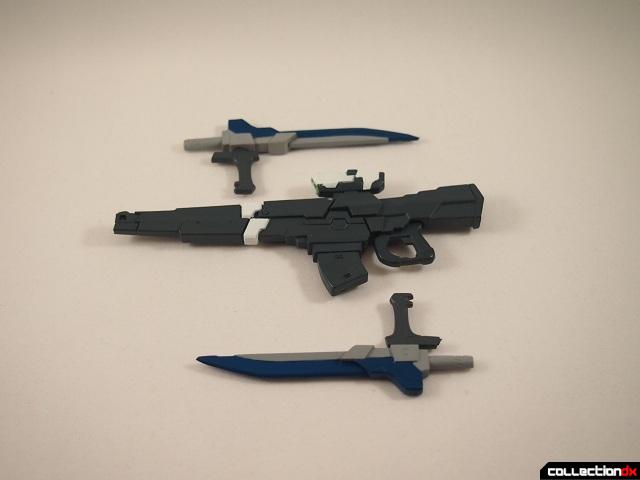 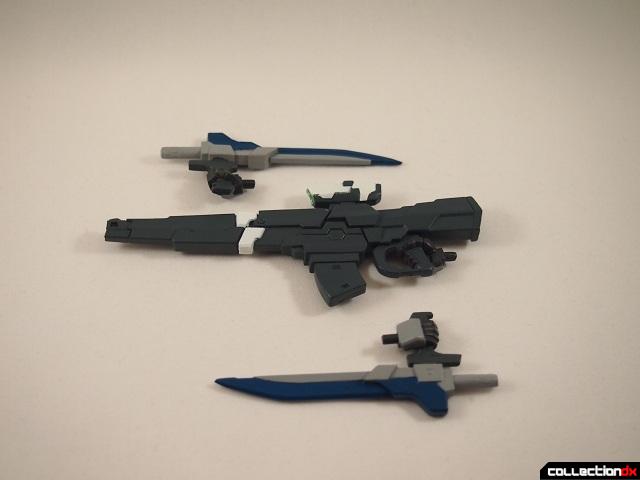 So, Volks doesn't do accessory holding hands. Ever. It's a founding tenet of that company: "Mold hands to weapons or else". The R-Blade takes that comforting constant and remixes it. The R-Blade's weapons all come with extra handles, one with a hand permanently attached and one without.

This gimmick makes sense in the context of the R-Blade, whose signature Blade Tonfas are holstered to its body when not in use. Unfortunately, none of the handles really fit securely. In the first place, the tonfas themselves don't really stay on well, and fall off with the smallest provocation. The tonfas were constantly falling off while I was taking pictures, both from the holsters and off the hand grips, but at least it looks good holding them. 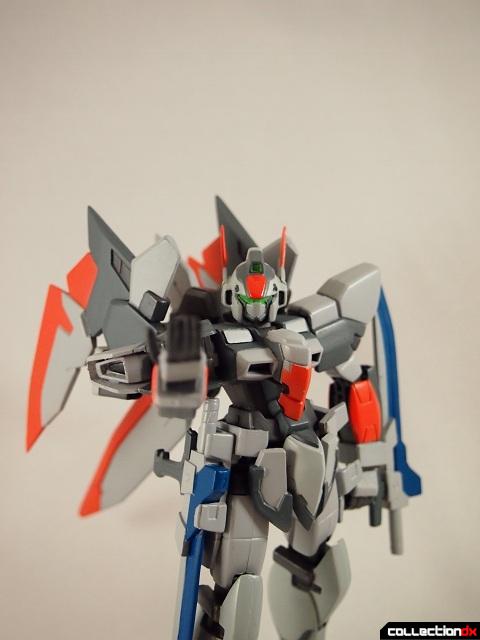 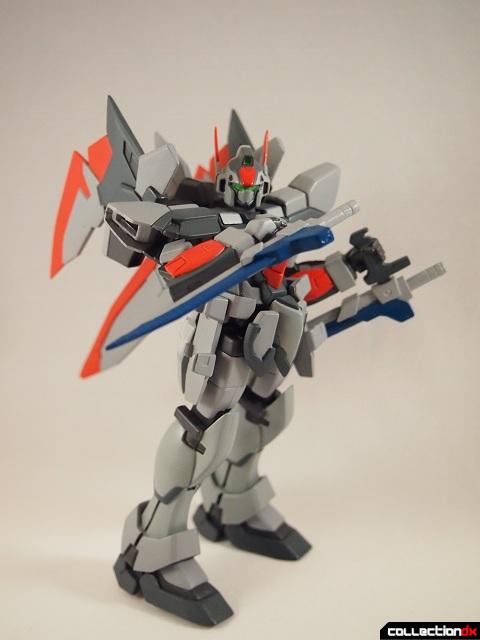 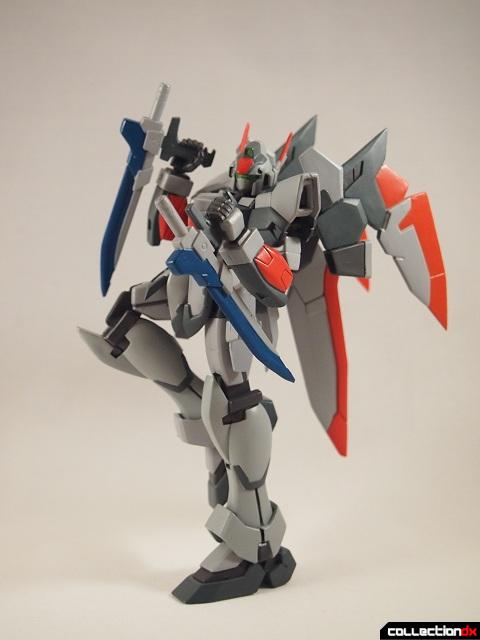 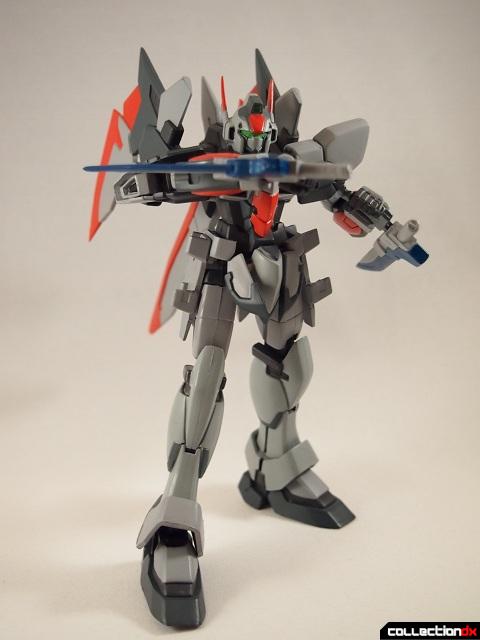 There's not a whole lot to say about the G Railgun. It's a big gun, and it's also prone to falling off the grip. I'm pretty sure the magazine is permanently attached, but it's done so in a way that looks like it could be removable. I really wish the twin G Revolvers had been included with this set. I'd probably take those over the railgun. 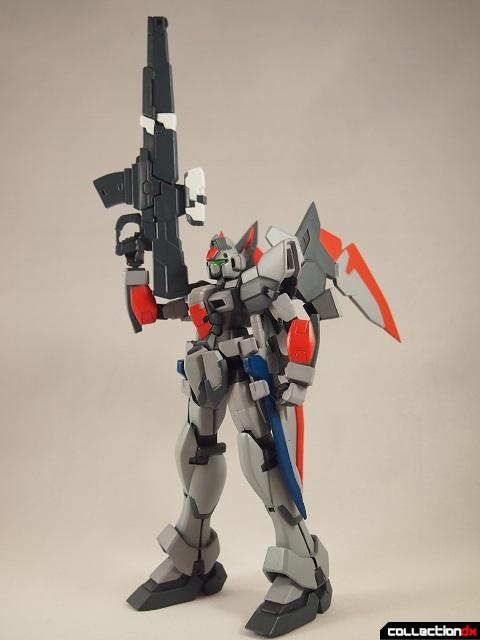 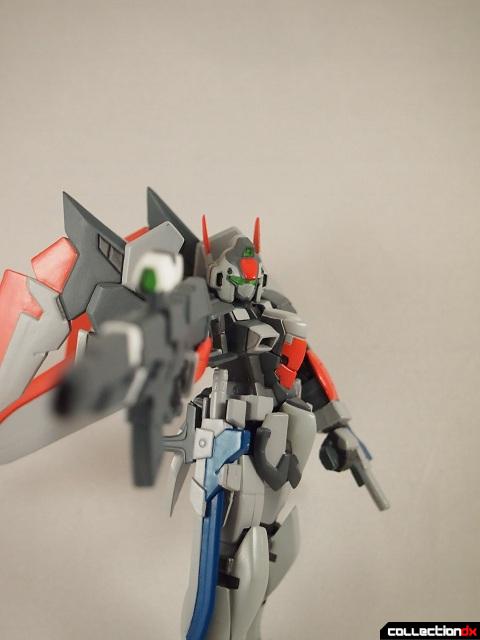 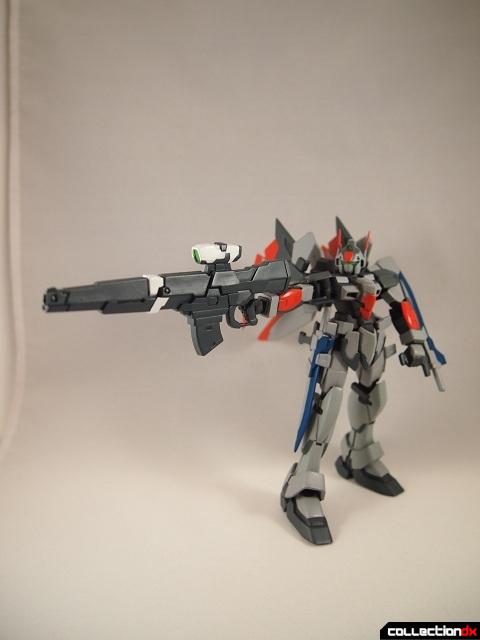 I've mostly ignored the FAF stands, but with the new packaging comes new stands, and the base for these is much cooler, featuring a new hexagonal design, the number and dimensions of the suit, and a stylized version of the name unique to each release. For the R-Blade, it's a corporate looking logo with the name of its manufacturer, Mao Industries. The hexagonal motif shows up on the box too, and I feel an odd compulsion to point out that the maps in SRW are not hex based. Also, the stand might be my favorite part of the figure. 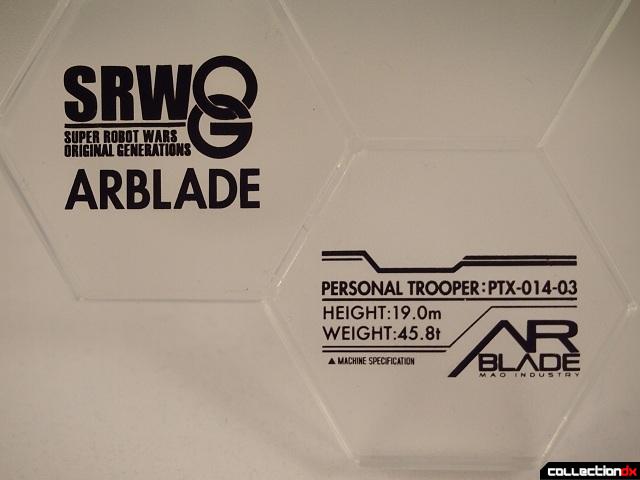 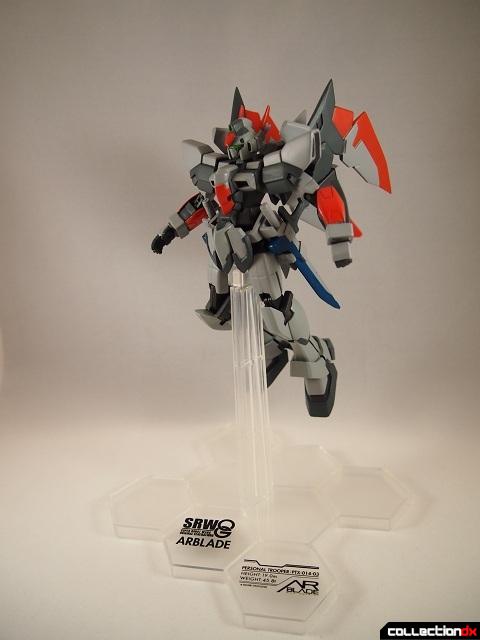 The R-Blade is competent, but not particularly exciting. If anything, its strikes me how little things changed. The closest comparison to the FAF line is probably Mobile Suit in Action, and I realized doing this review that by the time the R-Blade came out, MSIA version 2s and the MSIA Extend line had come and gone, and the Robot Damashii line had just made its debut, with the entries for all of those starting starting at at least half of the cost of a FAF.


*There are actually 38 total releases.**
**This isn't counting reissues and recolors.***
***Also several of the releases contained multiple figures. Please don't ask me how many figures there are.

4 comments posted
As deeply fascinating and

As deeply fascinating and bizarre as ever, even when 'mediocre'. Though they lack the central gimmick, the actual poorly-designed robots remind me a lot of the GFF/Cosmic Region figures? Many kudos for soldiering on with this project; easily the updates I currently look forwards to the most.

ps how many figures are there

Hahaha, thanks so much, that makes it all worth it. Though that means I can't let myself slack off...
The GFF comparison is extremely apt; the stiff PVCreally reminds me of the earlier GFFs, and they're just as fragile.

I haven't tried to write it all down, but I did a quick tally off the top of my head and I came up with 53, although I wouldn't be surprised if I I'm forgetting some. I haven't been able to find any concrete release info at all on the last 2-3 years of the line, so the trickiest part is trying to determine what got rereleased.

Anyway, thanks again for the feedback!

I was honestly expecting you to say, "god only knows how many they made" at this point.

That's more accurate in spirit, but it would betray all the effort I've spent scouring Japanese message board posts from 2008.