This is one of those "ohmygodwhatisthatihavetohaveit" purchases that come along every so often. It is rare that i find something that I have never come across before, and whenever I do I usually am compelled to pick it up. More often than not this lately seems to be bootlegs and off-brand toys.

What you are looking at is the Henkei Gatsutai Big Fighter OA  (変形合体ビツグフアイターOA), made by a company called "Long". I haven't been able to find out anything about the maker other than they  have made a few bootlegs and a few original designs.

The Big Fighter is one of those original designs. It's decidedly odd and clunky, with hints to the toys we like while still feeling alien - like a Transformers toy from an alternate earth.

The box is great - bright with lots of copy and fantastic illustrations which look nothing like the toy. In fact they are of ANOTHER toy by Long - United Megatank. 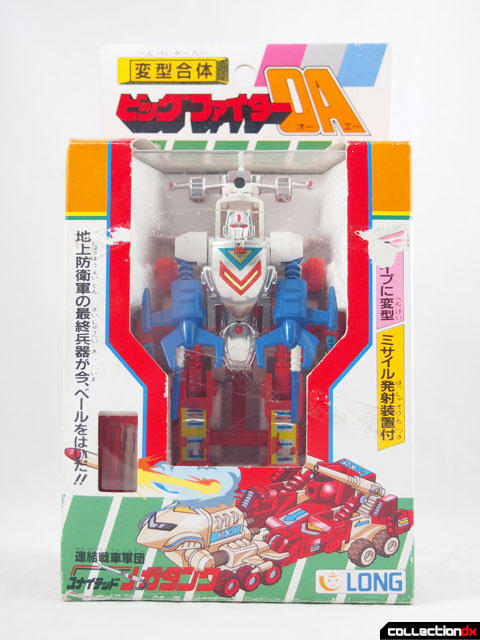 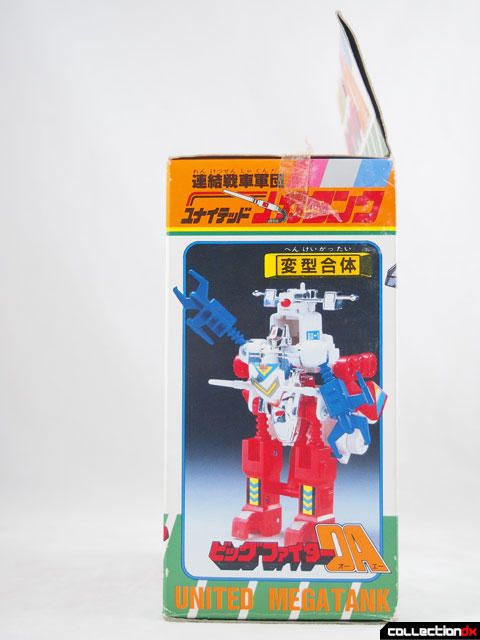 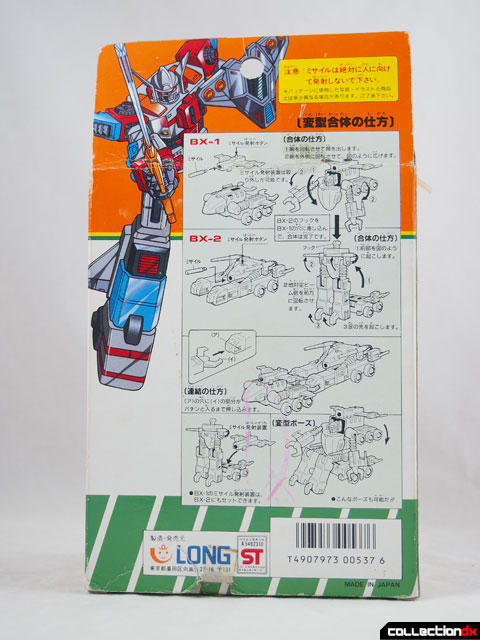 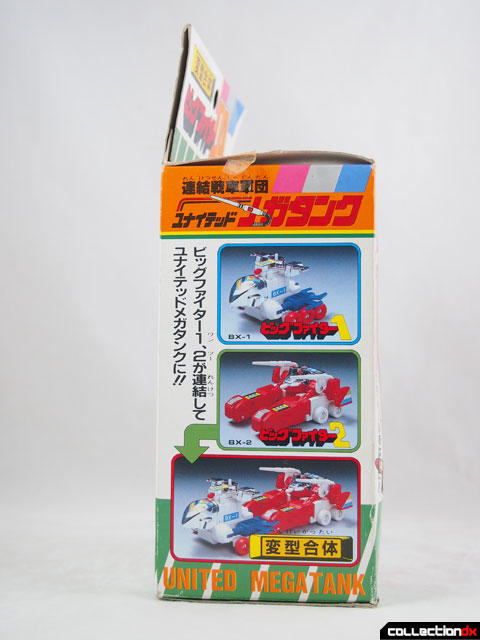 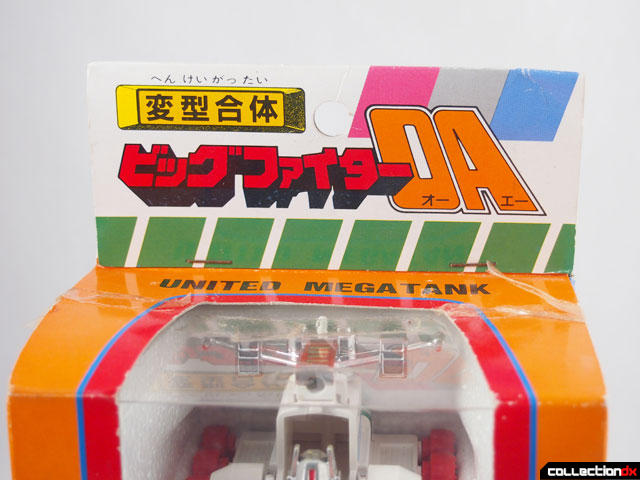 Inside the toy rests in a sturdy styrofoam tray. 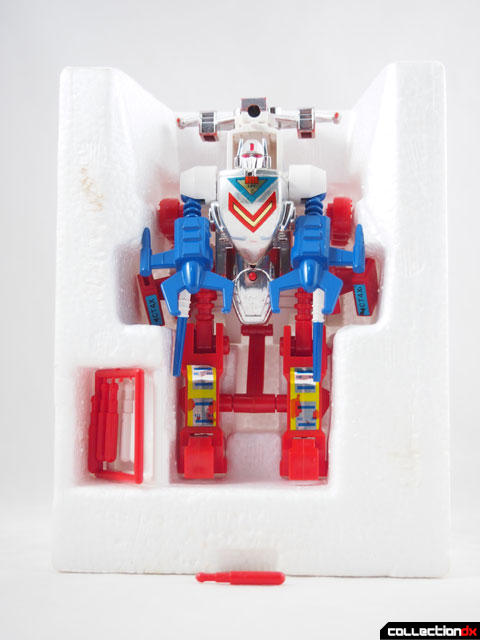 As the toy is a combiner, we will start with it's individual parts.

The first vehicle is known as BX-1, and it features a chrome nose and a missile firing gimmick on the roof. It has a vaguely Gatchaman appearance with the bird-like front end. It's all made out of sturdy, thick ABS plastic. 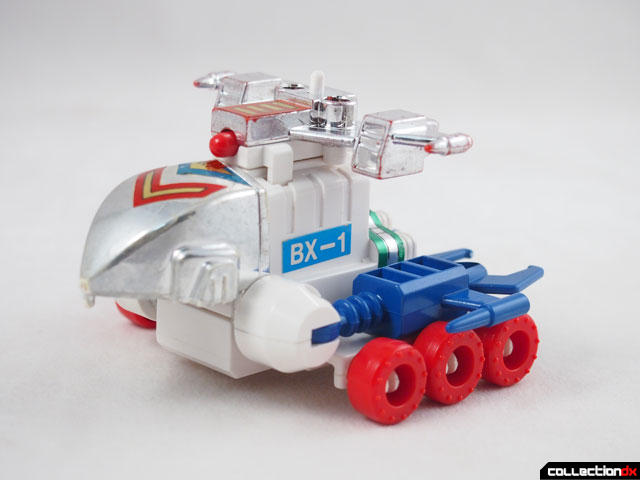 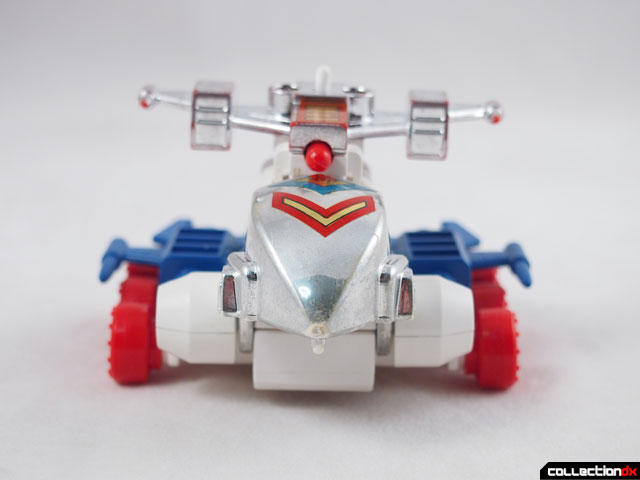 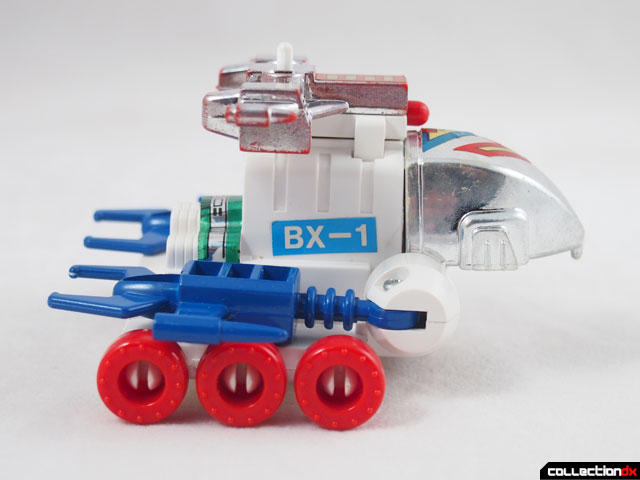 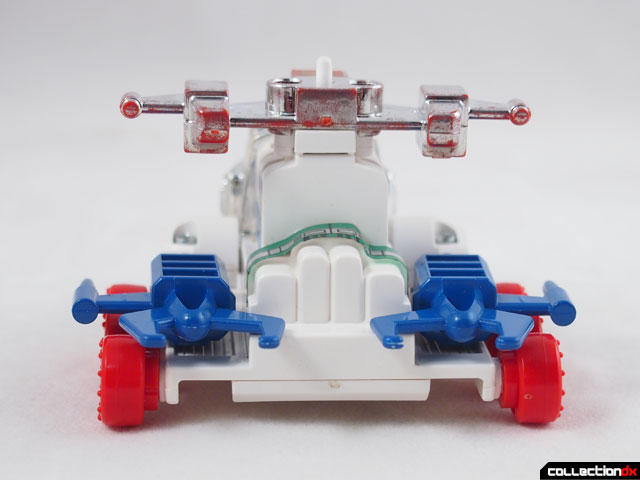 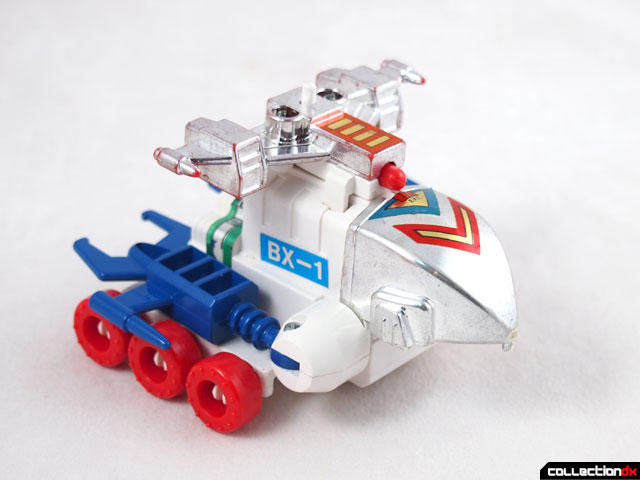 The missile launcher on this vehicle is actually removable and can be attached to the rear of the other vehicle.

The vehicle rolls around and shoots missiles. What else do you want?

The second vehicle is appropriately named BX-2. it's longer and more truck-like. It too has a chromed missile launcher and two movable guns. 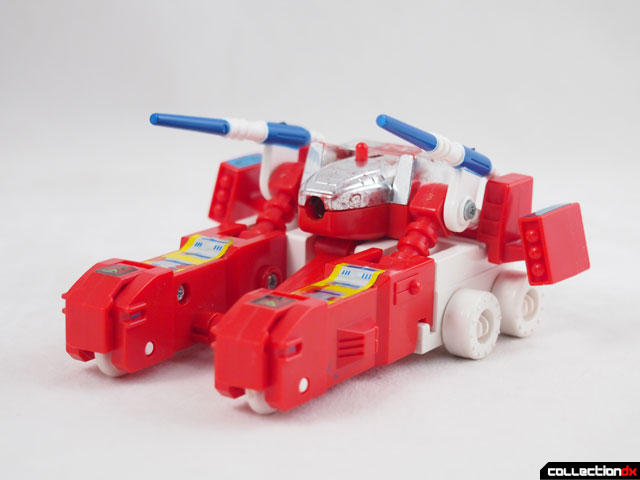 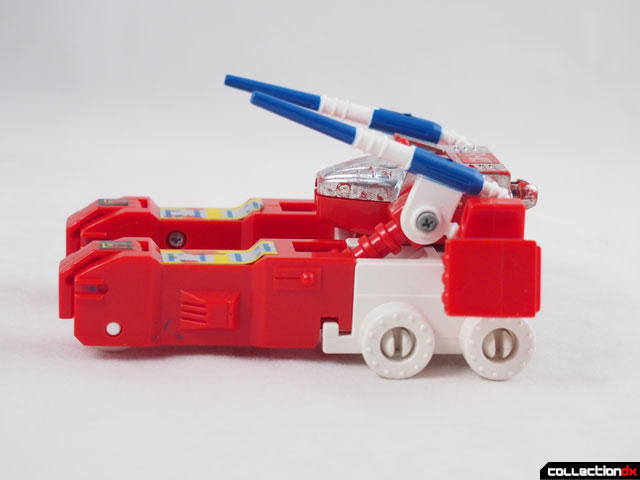 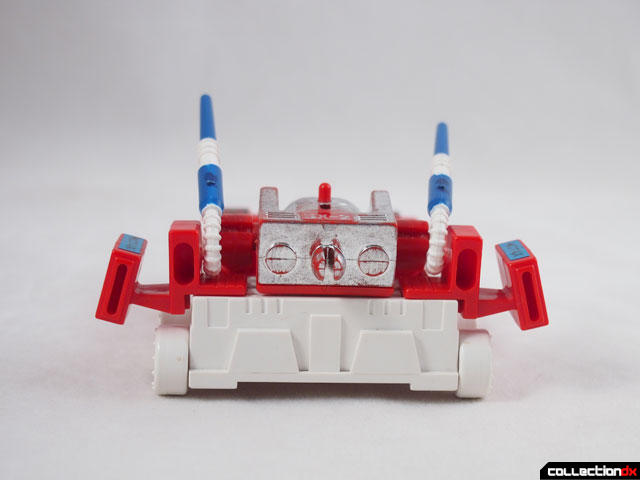 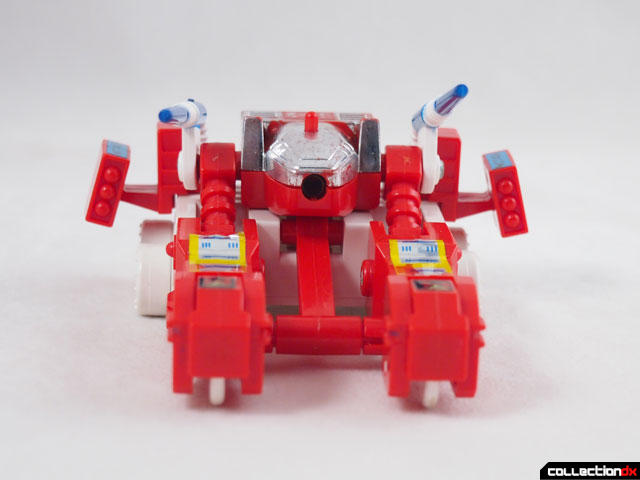 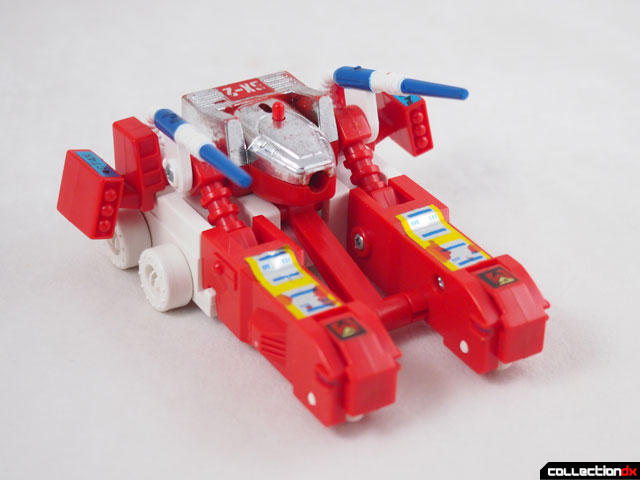 You can combine both to make a long vehicle called "United Megatank". The connection is secure and it all holds together very well. 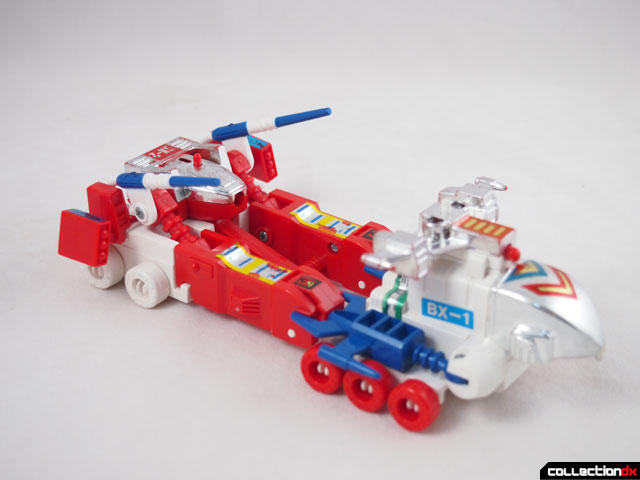 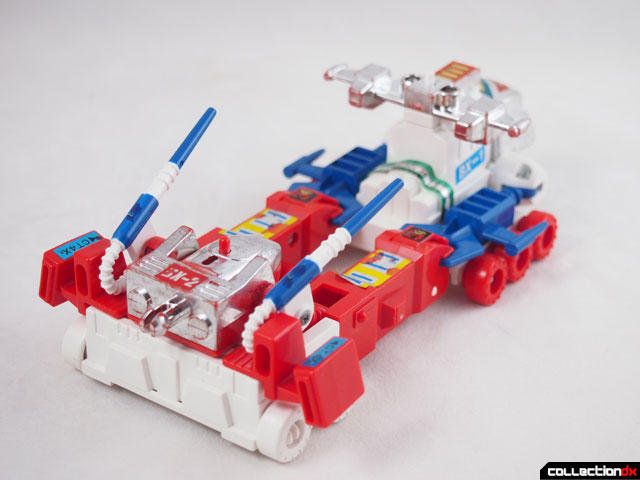 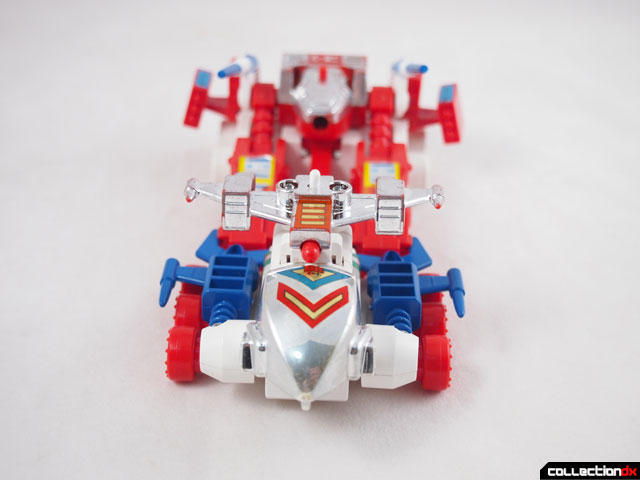 Take them apart, move a few parts around and recombine into Henkei Gatsutai Big Fighter OA! 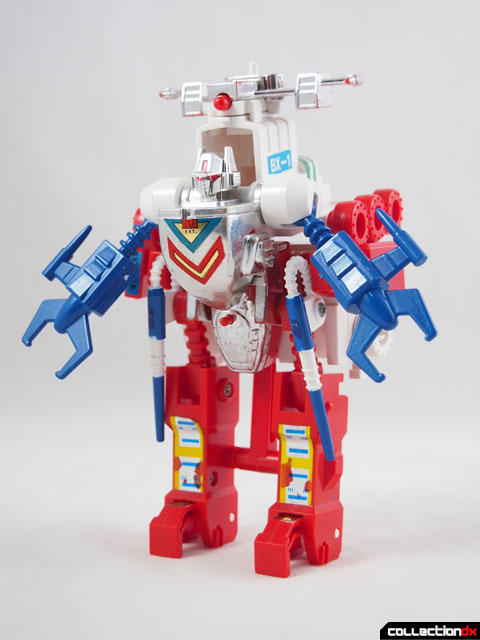 Wow, what an awkward looking robot. it's just sort of ugly. 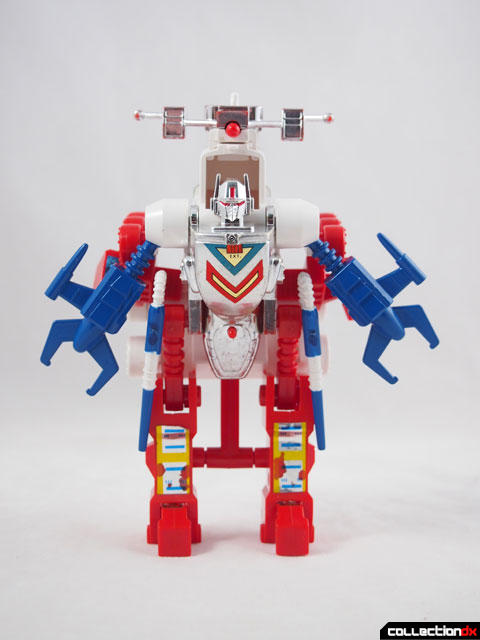 The head leads you to believe that they know something about Mecha design, but then you look at the rest and realize that they must have copied it from somewhere. 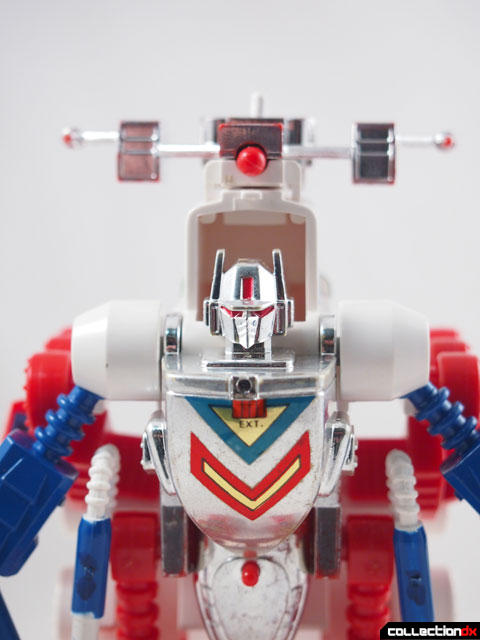 It's crazy in its own cool way. I don't hate it. It's nicely built and has a unique design. 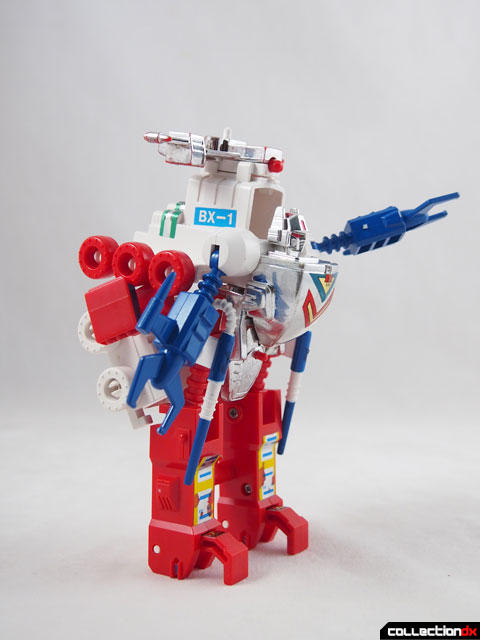 It's got some junk in the trunk that makes it rather back heavy. 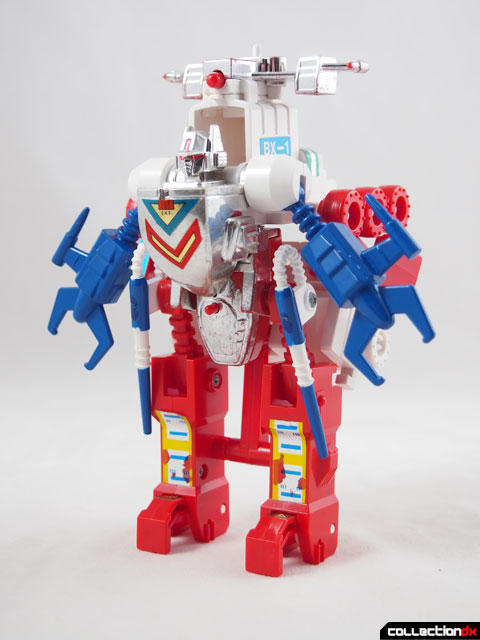 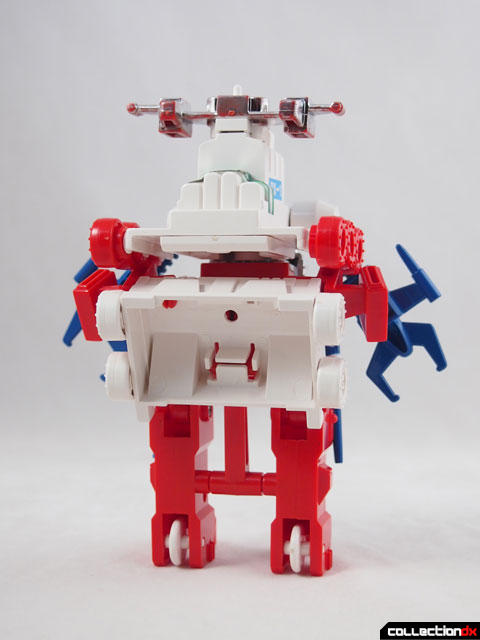 Carrying all that kibble around makes a robot tired, so the designers at Long thought it would be great to give him a "sit down" mode. It's a neat addition, but sort of useless. 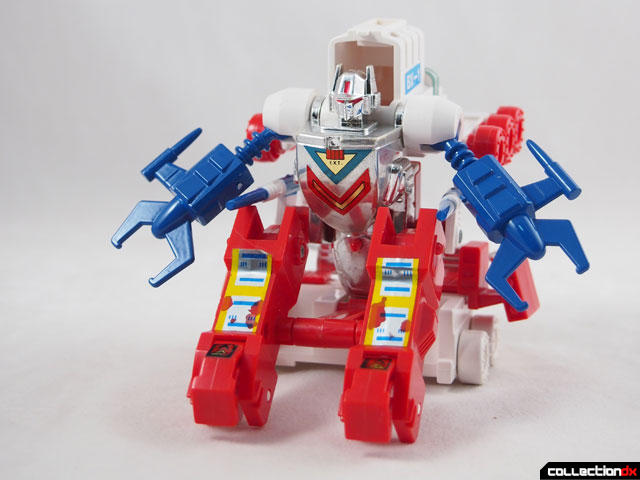 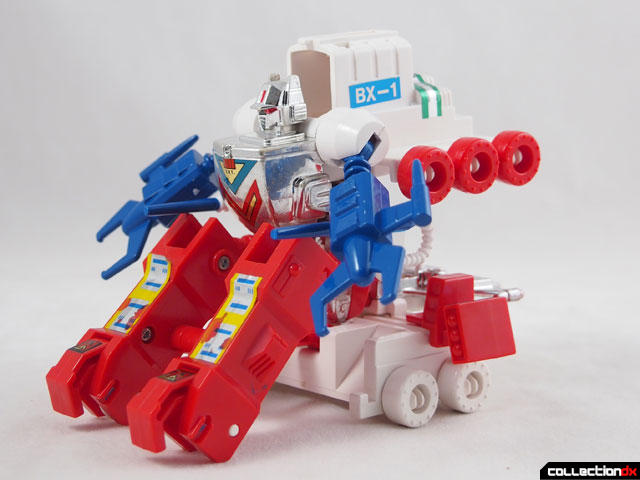 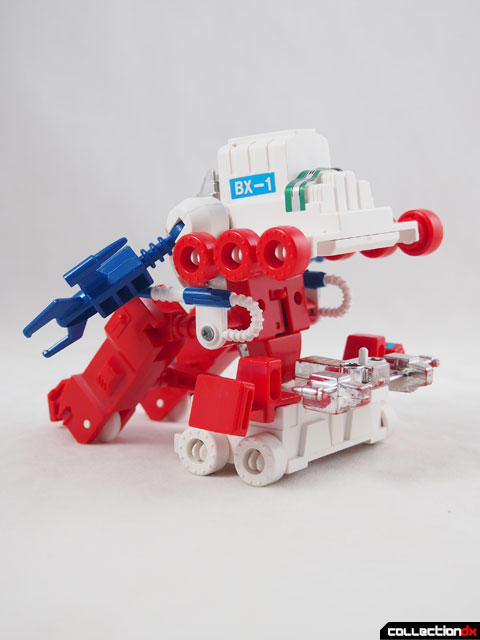 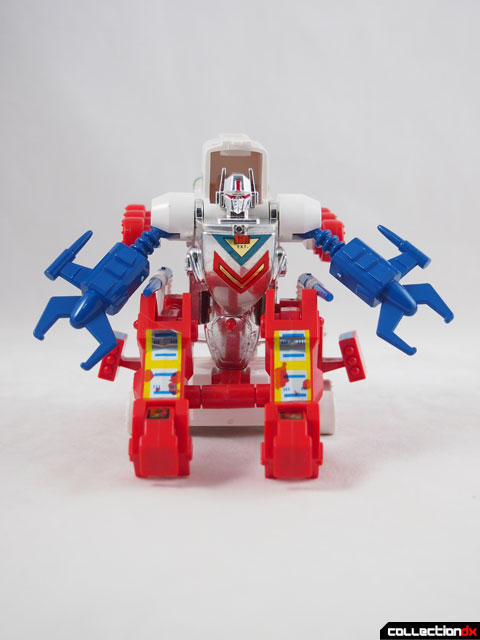 Sigh.....this bring back a lot of memories of being a young kid in the 1980's, not that I ever owned or ever seen this before but this is like the hundreds of imaginative robots toys in their cryptic box art that I remember seeing at the swap meets, flea markets and super markets.....these designs are fantastic to a young kid as myself at the time and the vehicles mode such as this were so far out and creative......

Dawww... now I'm super-sad that I can't just walk down to the local pharmacy or dollar store and pick up some far-out bootlegs. I used to use those places like 'junk shops', picking up cheap off-brand 'bots so I could cannibalize them for useful parts or see if I couldn't tool them up to be a little more playable.

It's to my great dismay that in the USA at least, I hardly ever see this sort of thing any more. For that matter, I haven't the foggiest who made the odd little guys I've got - maybe I should post some pictures up and ask the collective knowledge here if anyone knows anything.

Oh, on a totally related and none-too important not, I'm pretty sure those kanji are not 'Gatsutai' but 'Gattai' (small 'tsu'), as in 'combination'. Might just be a difference of which romanization I'm used to, though.

Thanks Josh for bring us down! LOL

If you ever decide to part with this bad boy, let me know!

just so you know Josh, the small kana make the kana behind it a longer sound,

I love this toy. I love its box art. I love how it barely looks like anything in any of its transformed modes. I love its big grabbler claws. I love everything about it.

Lili, review all of your bootlegs! All of them!!

I love the head. Chromed and a combination of Gundam and Optimus Prime.

NICE. This guy is great. The box is awesome too.

That head is next level awesome. I wonder where it originally came from.

I laughed long loud and hard when I saw "sit down" mode, picturing him scooting around on his robot heinie with his sweet little scooter-box thing, making dopey engine-revving noises! That robot mode is hideous standing up though. IMO, this thing's parts are greater than their sum; those vehicles are wicked!

I am once again jealous of the awesome bootlegs you people find! This one in particular is awesome, though. I usually am not big on the transformations, but this one turns into a lot of cool stuff! I especially love his claw arms.

Also I think it's amazing that in robot mode the missile launchers either fire straight down or into the backs of his arms.