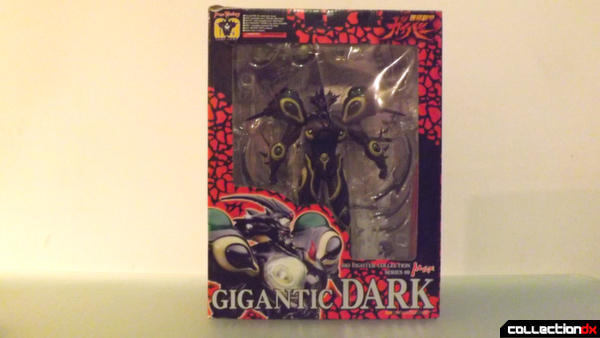 Guyver Gigantic is the true form of the Guyver.

The unit was found by Sho Fukamachi in the Relic Space Ship under Mount Minakami, but upon discovering it, the ship was destroyed by the Zoalord Council.

Sho spent a year inside the Gigantic cocoon in a coma, until Mizuki Segawara called out for Sho when Neo Zx-Tole attacked.

Gigantic Dark appeared when Agito Makashima aka Guyver 3 discovered he could equip the unit by having stronger will than Sho. 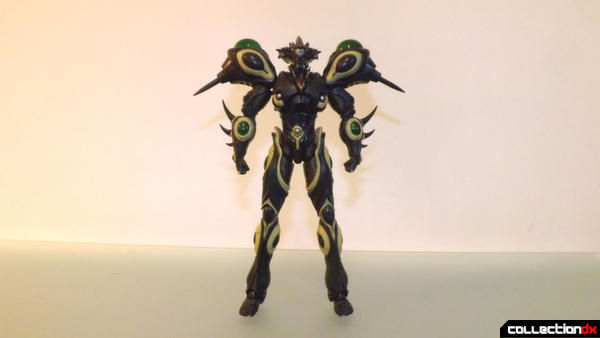 From behind you can see the boosters on the upper back of the figure, for extra power when delivering a ROCKET PUNCH! 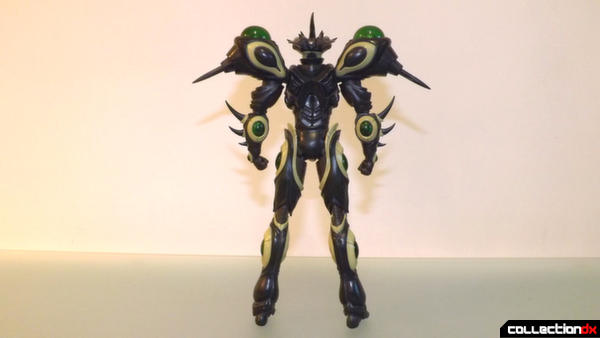 Guyver Gigantic is twenty times as powerful as a normal Guyver, it improves all abilities and weapons used by the Guyver and adds more abilities to the user, such as the Power Amps, which are the big green orbs on the shoulders, and the final new weapon is the gravity ram, the chest spike extends and Gigantic uses his back jets to ram into enemies, hitting with massive power. 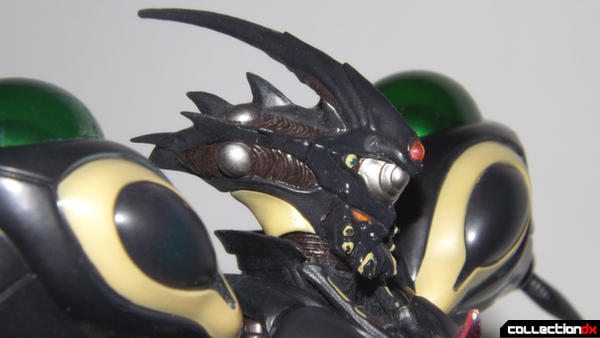 Gigantic Dark stands 9 1/2 inches tall and comes with a good array of accessories.

First are the small and large High Frequency blades, on Gigantic Dark there are 3 blades on each arm, i haven`t been able to remove the smallest blades to change to the larger ones, i tried using pilers with no luck, i was too scared of breaking the figure to force it, which is why the pictures don`t show the smallest blades larger attachment.

The chest spike and gravity ram, a normal head and one with the vibration globes opened on the sides of the face.
The figure comes with a set of three hands, a display stand is included, but its slightly different from others in the series in that its larger and the stand can hold figures horizontally to give flight poses and finally attachments that make up the Giga-Smasher. 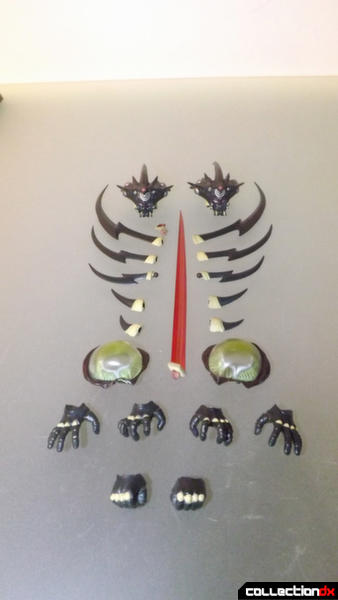 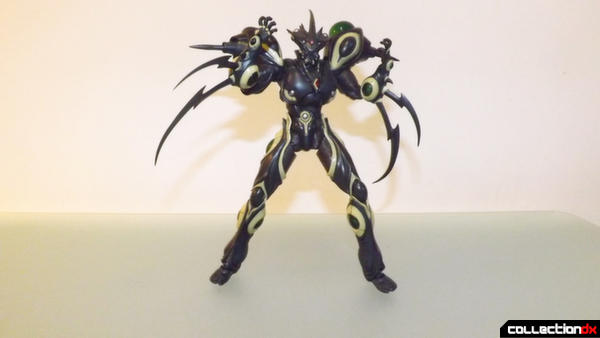 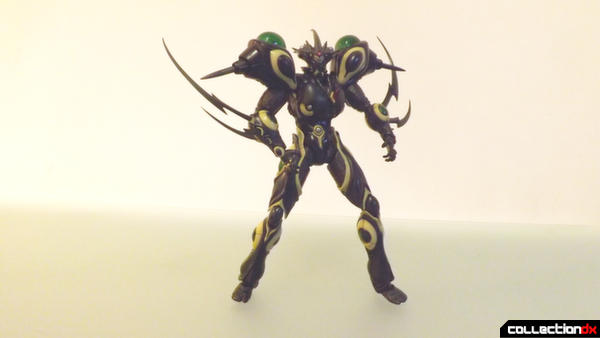 The figure comes with two slightly different head sculpts, to have the open and closed look of the enhanced Sonic Emitters.

Its only a very minor sculpt change, with an extra set of Sonic Orbs around the mouth area. 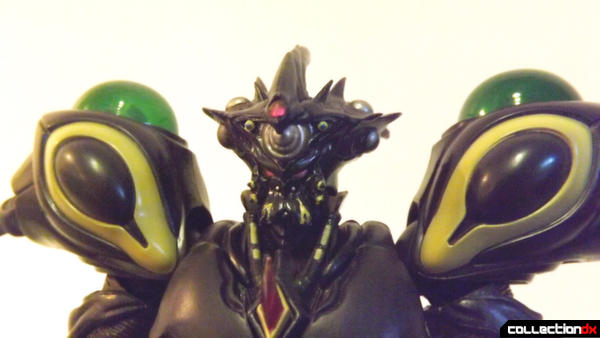 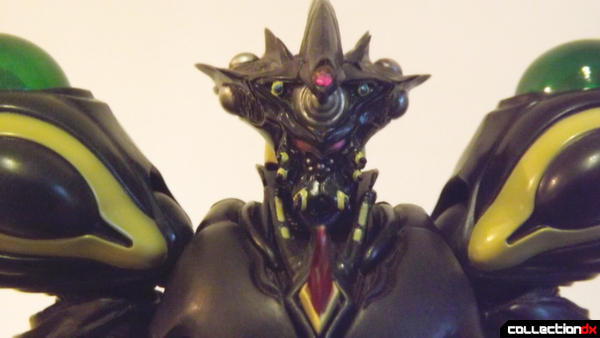 The Giga-smasher, or what i call the "Booby Blasters".

To attach the Giga-smasher, you open the chest panels and rotate the orbs inside clockwise to reveal the peg hole for the attachments. 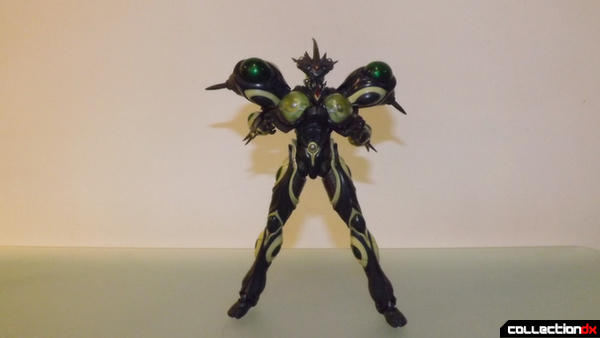 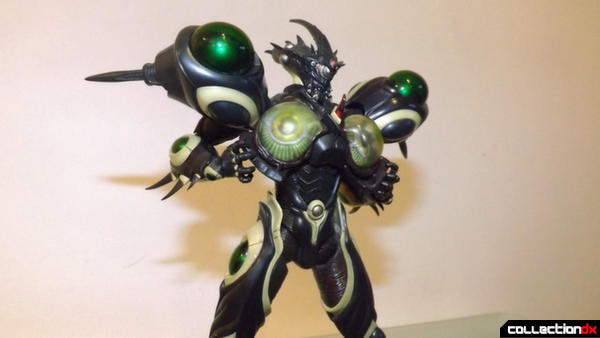 The Gravity Ram for Gigantic Dark is a clear red plastic that attaches to the chest of the figure, simply un-peg the small chest spike and replace with the Gravity Ram.

To get the Gravity Ram pose, you will need to pose the figure in a flying position.

The figure has great articulation that allows you to have the flying poses, the head is on two (count em!) ball joints that allows the head to look forward in a flying pose. 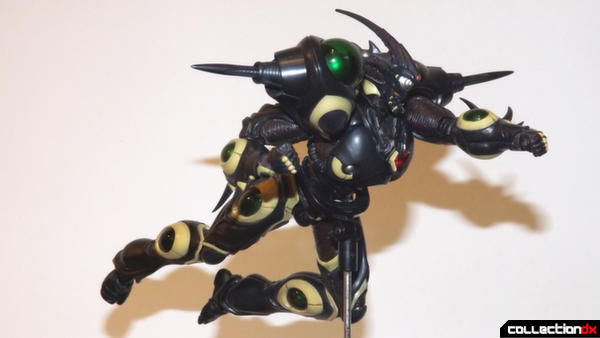 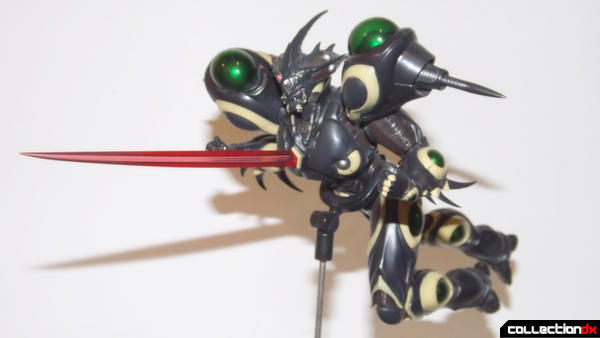 Gigantic Dark can sometimes be difficult to pose without its stand, it takes patience but you get a good range of poses from the figure. 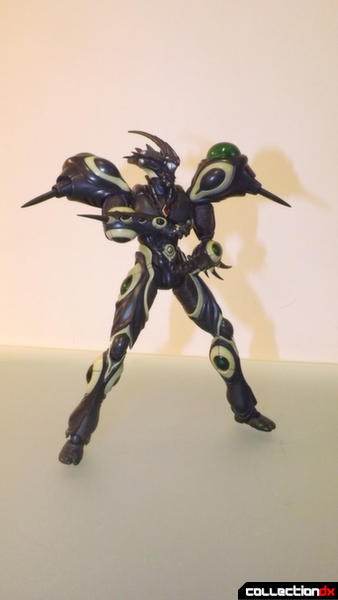 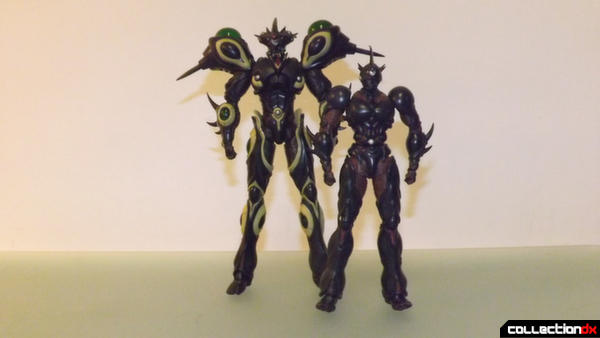 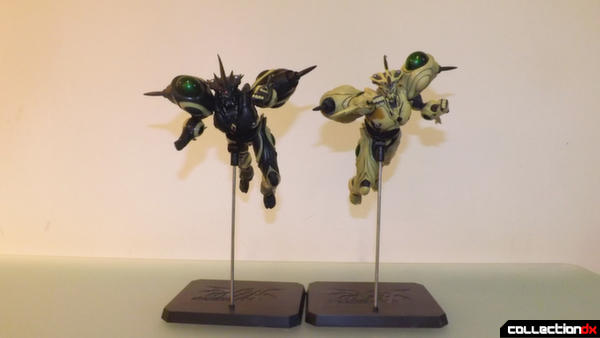 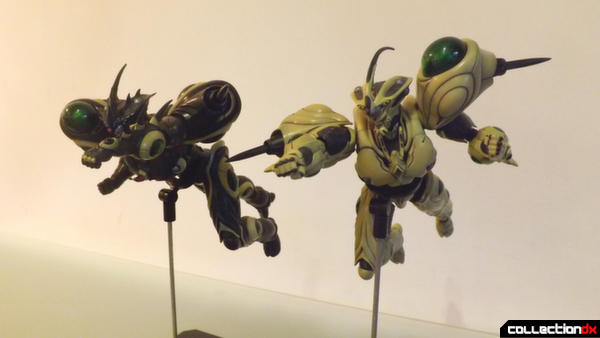 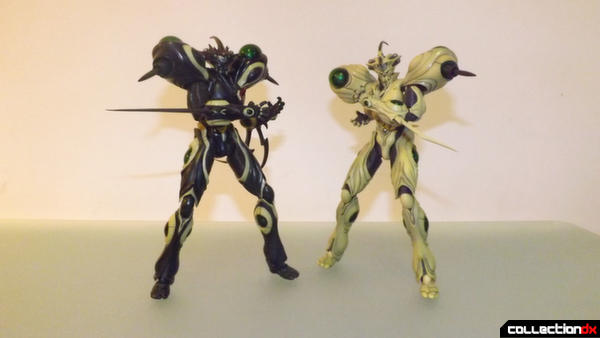 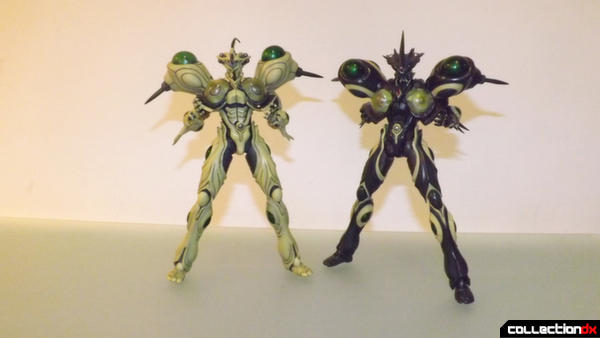 I have this figure as well, and as much as I like it I have to admit that those arm blades are a pain to change.

The trick to get those small ones out is not to pull them outwards. Pull the tips FORWARD, towards the wrist, and they tend to come out more easily.