What you are looking at is a thing of legend. A toy so rare that I have only ever seen three in all my years of collecting. This is a fully combining ST Dairugger XV (aka Voltron 1). 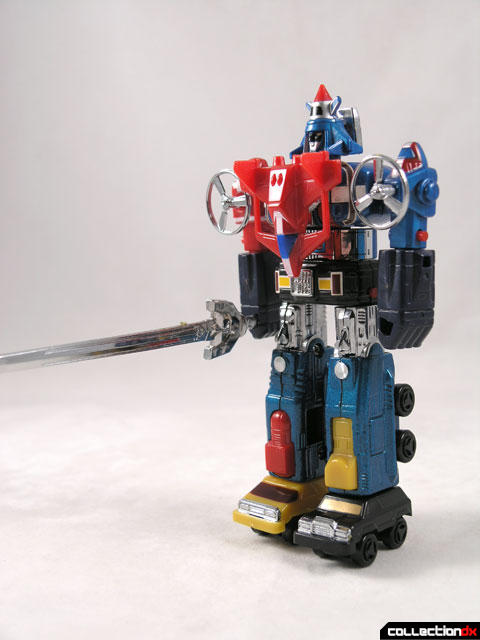 Now, I know what you are saying, They made not one but TWO combining Dairugger XV toys. Popy made a Deluxe Chogokin (GB-72), a large plastic combiner, and a small, non-transforming Chogokin (GB-73). What you are looking at here is a bootleg of the GB-73, only unlike the original, this toy actually separates into 15 separate vehicles! Amazing! 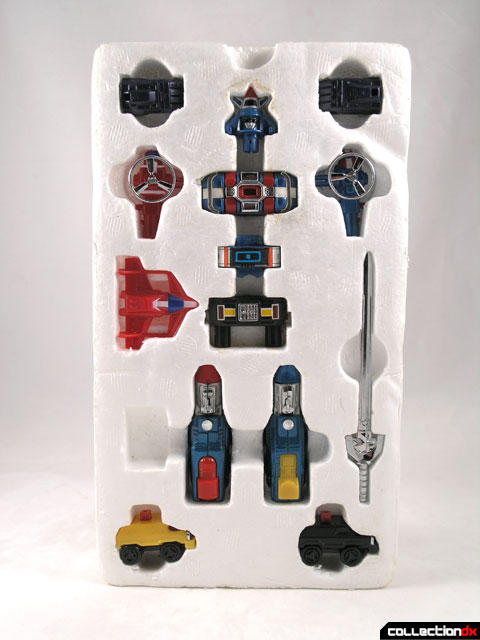 I first learned of this toy at the 2003 Summit, when Mark Gradwell brought up his version of the toy. His was packaged in black packaging. I begged and pleaded with Mark, "Please Please sell me this toy! I will give up my first born for it!". But Mark would not budge. Apparently, he had some kind of "Sentimental" attachment to it or something.

Years went by, and I had never seen another until I got a chance to look at Mark's toy again at the 2006 summit. Again, I pleaded. Again, I was denied. However a few months later, Mark sent me an email alerting me to an auction with another bootleg Dairugger XV. This one was loose, and missing a few parts, but I jumped on it instantly.

Almost immediately after I received the package, I saw that a Robot-Japan user was selling another bootleg Dairugger XV, this time in different packaging than the one Mark had. The deal was done, and now I have not only one, but TWO bootleg combining Dairugger XV toys. 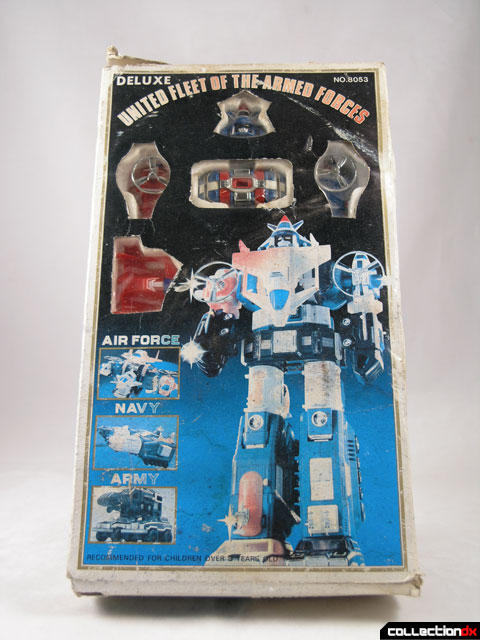 The name on the box says United Fleet of the Armed Forces, but we all know it is Dairugger / Voltron. Each of the 15 parts rests in a separate spot in the styrofoam tray. The box front has an image of the large plastic DX Dairugger on it, with a few windows cut out to see the parts. The back has instructions on it, but the instructions are also for the DX Plastic Dairugger. 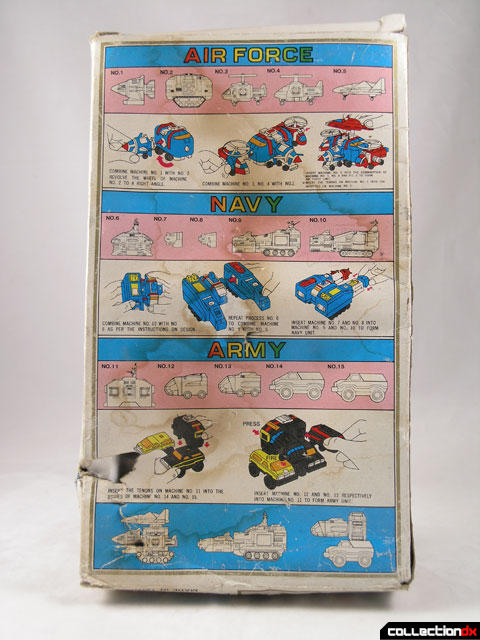 The toy can be assembled into the three teams in addition to the full robot. 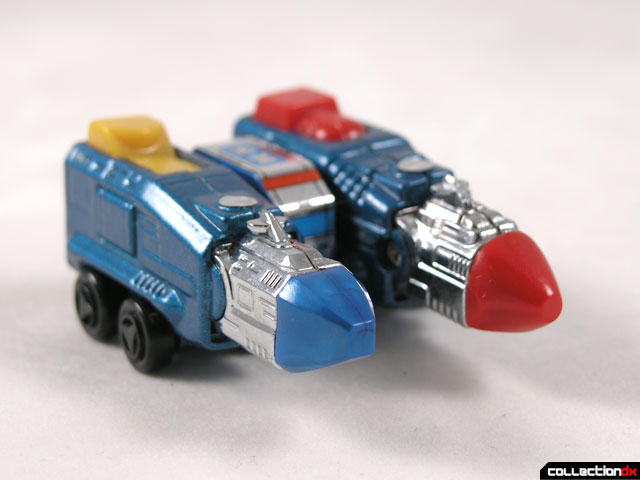 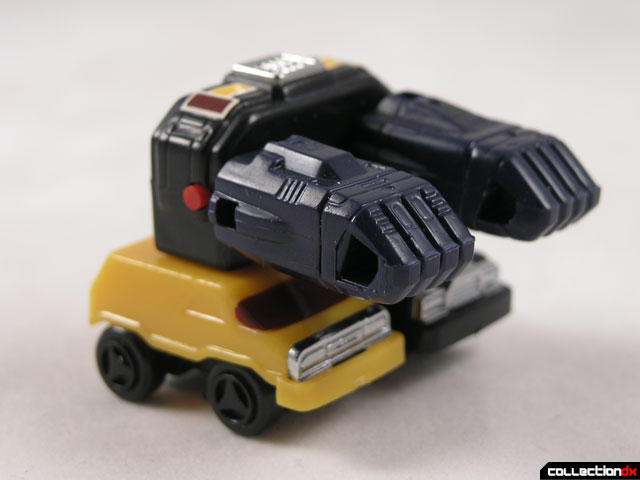 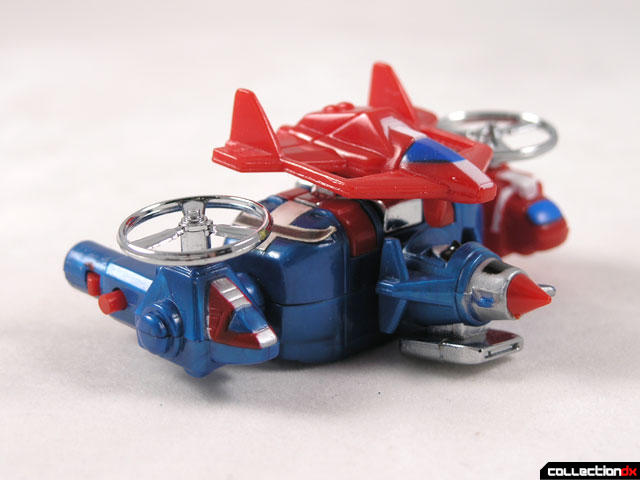 In it's combined form, the bootleg is almost the same height as the real ST Dairugger. While some parts are based off of the Popy toy, most of the toy is made of entirely new molds. The bootleg is mostly plastic, but the entire leg assemblies are metal. 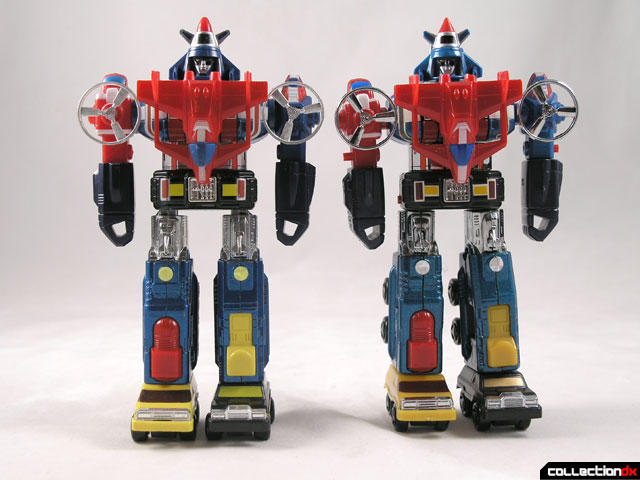 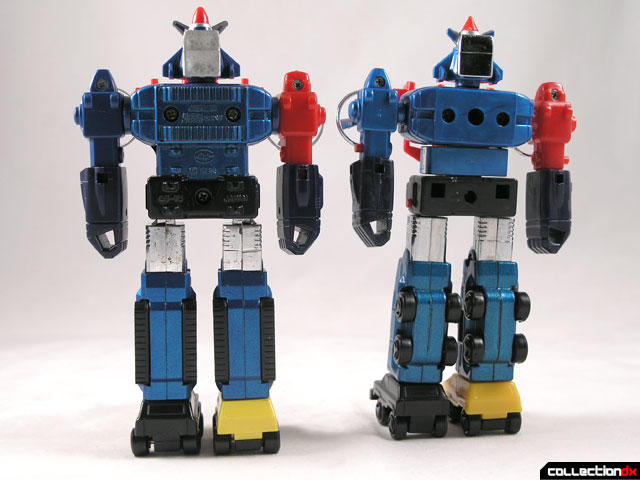 The fists fire just like the ST Chogokin, and this version even includes a sword!

When I was younger, I had the small Matchbox Voltron 1, and I always wished there was a version that transformed like it did in the show. Never in my wildest dreams would I imagine I would actually own one. It really is one of the most cherished pieces in my collection.

Hiya Josh and a big Congratulations on locating this legendary toy!

I read Collection DX regularly and am from Australia. Upon reading your review I remembered way back in 1989 when I migrated to Australia, my cousin gave me this exact same toy as a present!

Of course at that time I thought - this is a cheap copy of the bigger combining Dairugger XV that another friend gave me!

Never did I realise that it would be so prized today as a collectors item!!

Back then in Indonesia these toys were plentiful including all the legendary Bandai chogokin line of toys!

Nice Pickup! I really like that! It's really too bad one like this wasn't available in the states back in Voltrons heyday. You either had to settle for the $75 Matchbox version or the LJN rubber "assembler" if you wanted a vehicle Voltron that actually combined(I had both). I didn't see any pics of the 2 small submarines(Space Probers) detached from the robot, do you have any? I'm curious to see how they connected to the bottom half of the legs.

I'll try to take some new shots, but essentially you take the blue and red caps off and they just plug into the bottom of the black waist unit. Just be careful as to not loose the caps!

Congratulations Josh, you finally got a hold of one of these. I feel much better now. Denying you all these years... for sentimental reasons. Well, if it makes you feel any better, the box on yours is cooler than mine.

I loved this review and I also have a bootleg which I bought in Puerto Rico at a Toys R Us in 2000. I must have paid about $20 bucks for it at that time. It has all of the 15 peices and stands about 15 inches high or so. it's made of all plastic and some of the parts have broken off but I have all of the connecting robots. The colors are all misplaced but when I saw this toy back in 2000 I knew I had to get it!

the box was huge and had beautiful art on it and was mostly yellow. Sadly i don't have the box anymore.

Edit: After reveiwing your pictures some more I realized I am missing the chest piece (Airplane)

Here are a couple of pics:

I got one just like that a few years back at a K-Mart for $10. Sold it for $10. Had I know how important it was in Japan, I might've asked for something a little higher despite being a bootleg.