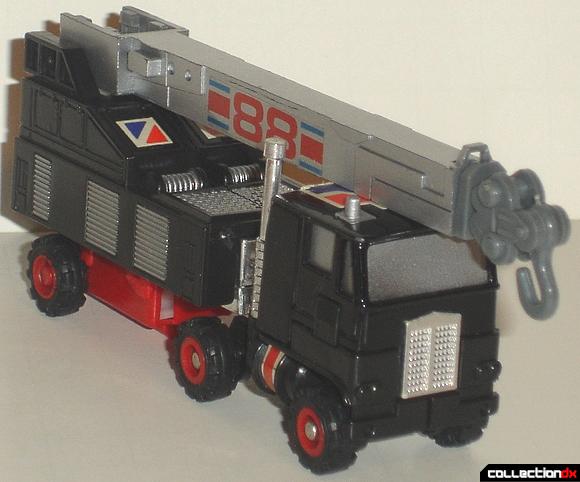 During the course of the 80s with the popularity of Gobots and Transformers, there were countless lines of transforming robots. The one I'll be discussing today is from the "Moto-Bots" line. The gimmick of his line is that all the figures have removable pull back motors and this one turns into a very nice looking Crane Truck. 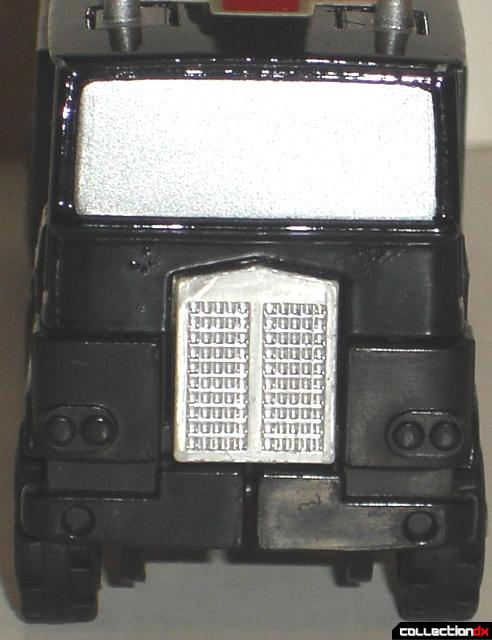 The front windshield isn't transparent (unfortunately), just painted on in silver. The front grill (which also becomes the robot's head) is painted in shiny chrome. The cab is made out of die-cast metal giving him a little bit of weight. 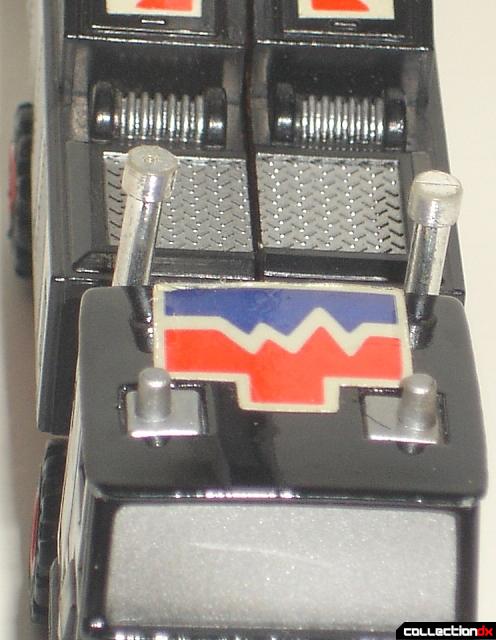 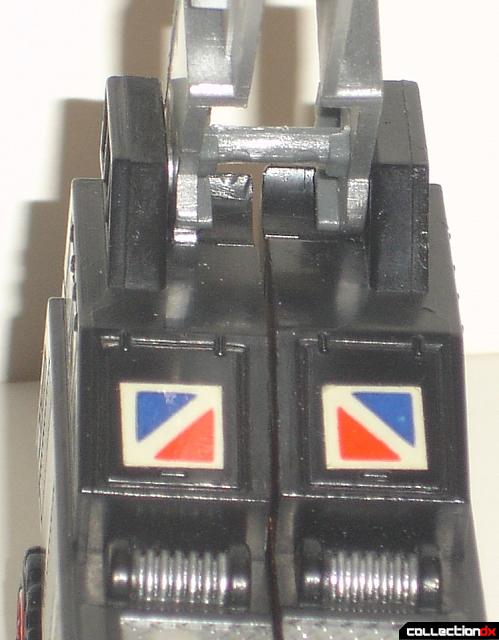 On top there's a decal with a pattern that reminds me of the lines on an EKG machine. I don't know what those silver things are on top of the cab so let's use our imagination and say that they are lights. Moving on to the rear part of the truck, we have two more decals on what would become the knees in robot mode and something that looks like chains on spools. 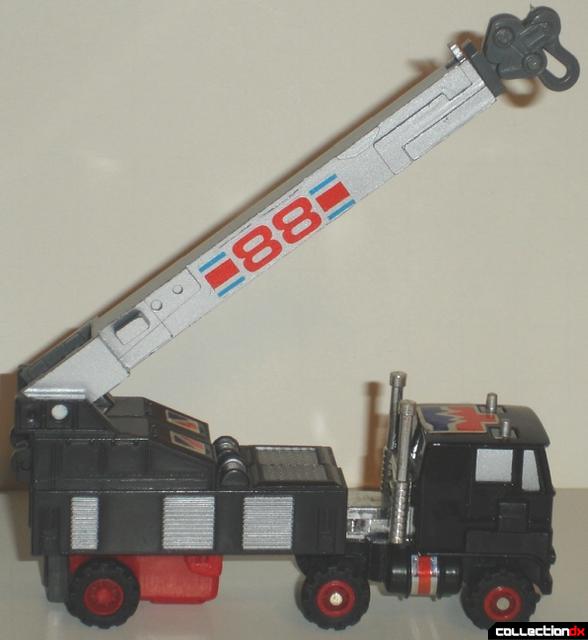 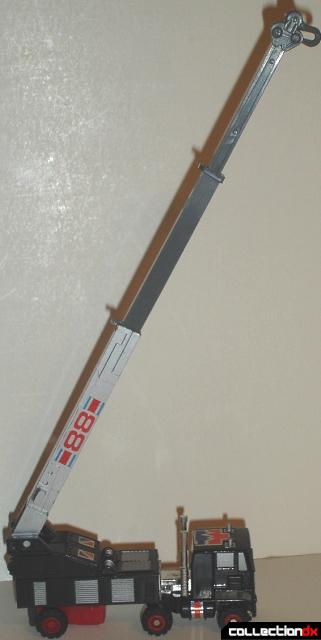 The crane raises up and down on a single joint and has the number "88" painted on the side. Not sure what it means. It extends about twice the length of the entire truck and even though part of it is painted silver, the parts that extend have been left unpainted. The hook at the end moves up and down. 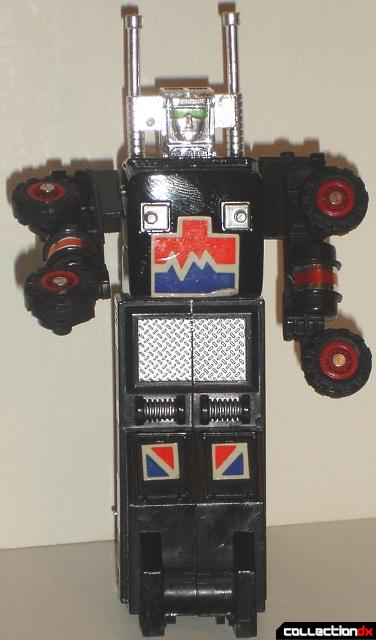 To transform him remove the crane and the smoke stacks from behind the cab, stand him up, unfold his arms from behind the cab, press down on the cab to expose the robot head and place the smoke stacks behind it and you're done! Crane truck has only two points of articulation in this mode, so yes, he is a brick like so many other 80s robots. Doesn't bother me, though. 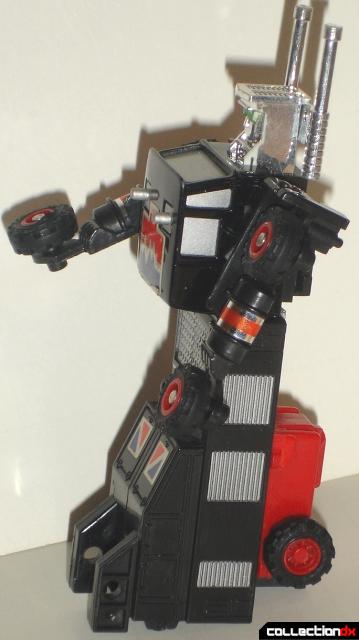 Unfortunately in robot mode you can't use to pull back gimmick. 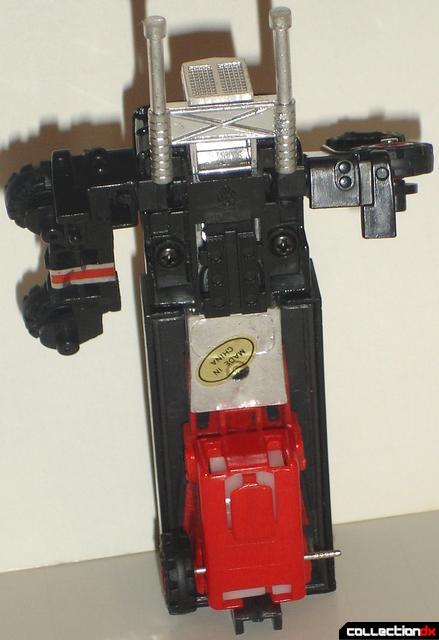 From the back he's a little plain looking and I can't seem to remove the pull-back motor. To be honest, I'm afraid to force it because it might break. Also, even though my sample is missing a wheel, the pull back gimmick still works perfectly in truck mode. 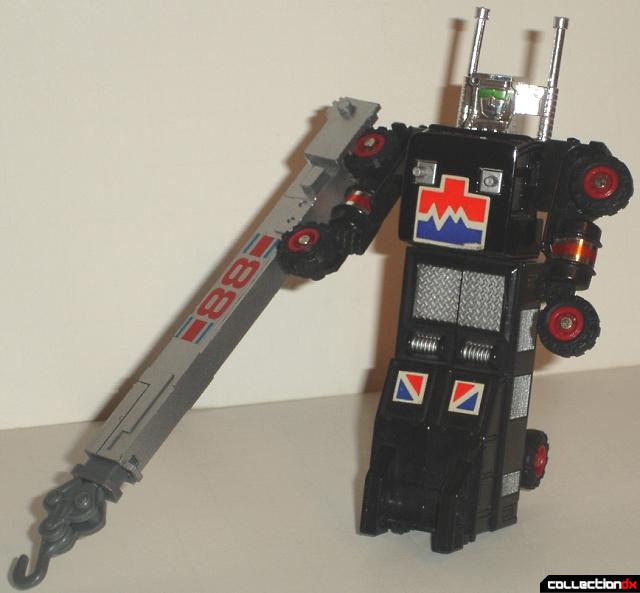 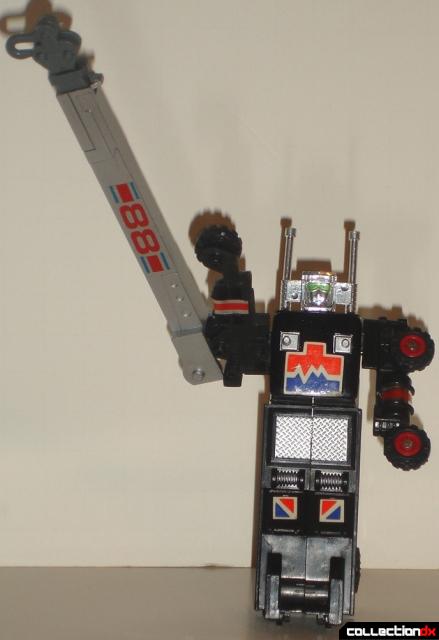 To the best of my knowledge, none of the Moto-Bots came with any weapons so just for kicks, I attached his crane to his arm to be used either as a melee weapon or some kind of high powered arm-mounted cannon.

Okay, here is where things get a little confusing. I have a retool of this guy and on the back of that one it has the name of a company named "Maisto." On the back of this sample however, it says "M.C. Toy" in tiny letters. I did some research wondering what the M.C. Toy Company was and I found several sites that could possibly be the maker. Maisto was the fist result, but I also got "Magic Cube Toys" (which had a lot of detailed action figures), "M&C Toy Centre", and something called "Global Die-Cast Direct." I'm not sure whether this guy is a knock-off made by a defunct company or not but it would sure be nice to know. (M&C Toy Centre has Asian text on the site so I have a hunch that this may be it) Another thing I would like to mention is that I have no idea what year this sample was made. The retool I have, I brought brand new sometime in the 90s. This one I bought loose online.

I give this guy an A+. Every now and then I see either him or one of his repaints pop up for cheap on various websites. If you ever see one and don't mind bricks you should pick one up, but do NOT pay too much for it.

Isn't Maisto a fairly well known and well respected maker of Die Cast cars? If so it would make sense that they dove into the fringes of the 80's Transforming Robot boom.

These started appearing in the mid 80s as Moto Bots or Dyna Bots (sometimes "Botz"), ostensibly produced by MC Toy originally and probably knocked off endlessly. The Maisto branded versions started appearing in the 90s. Some of these came in funky 90s color patterns with neons, and some were accompanied by trading cards. The removable smokestacks I believe came around in the 90s. The Dyno Drive pullback motor can be removed and placed on the back prongs so it will work upright in robot mode. This style of body is one of the more ubiquitous, there are also a number of boxy jeep/pick up truck type bodies and then a chunkier series of trucks or half-tracks that were called Mega Moto Bots or Trekkers.