In my pursuit of a Rogun collection, I have developed an affection for the goofy, unloved Arco transformers of the eighties.

While many are familiar with the ubiquitous brightly colored transforming guns licensed by Bandai and repackaged as Gobots, Arco produced a handful of non-gun transformers as well, including a dorky binocular robot and at least two nautical molds.

Until I spotted this guy, I was only aware of Destroyer, a surprisingly well-proportioned, if clunky, battleship/robot. I wonder how many other molds are out there? I can’t even find a proper name for this one. There’s also a (remote) possibility that this toy was licensed as a Robotech toy. Arco released some of its molds under the Robotech license, typically the same toys but with real-robot type decals and muted color palettes. This specimen is more muted than the only other photo I’ve seen of the bot, in which it appears to be molded in a much brighter blue.

So a lot of mystery for such a trifle, but intriguing nonetheless. To me at least. And I trust that some diligent reader will illuminate the origin of this figure in the comments.

The ship measures a healthy 11 inches from tip to stern. The molded detail is pretty solid, as are the nice decal flourishes. The ship isn’t terribly exciting, but it’s suitable for flying around the room. 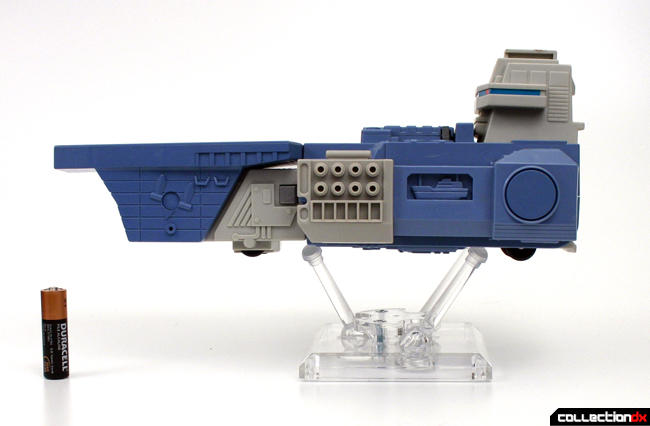 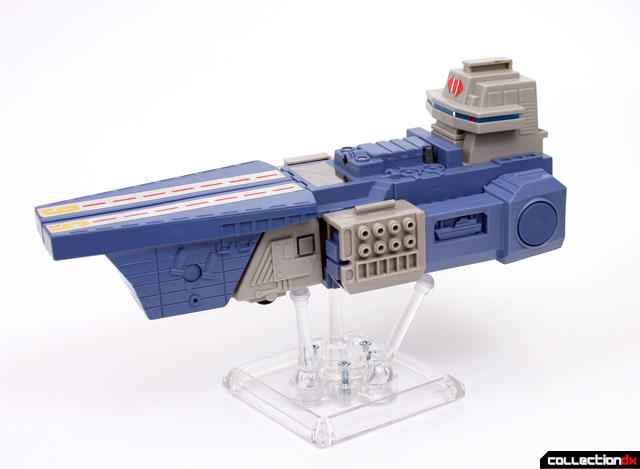 There are hints of missing accessories on the conning tower and sides, slots for something. There’s also a spring loaded mechanism on the deck to fire a projectile. 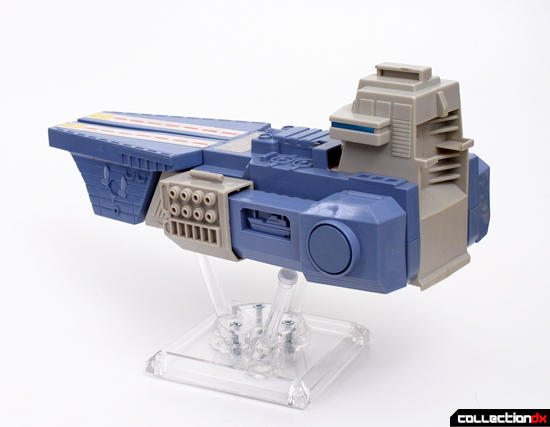 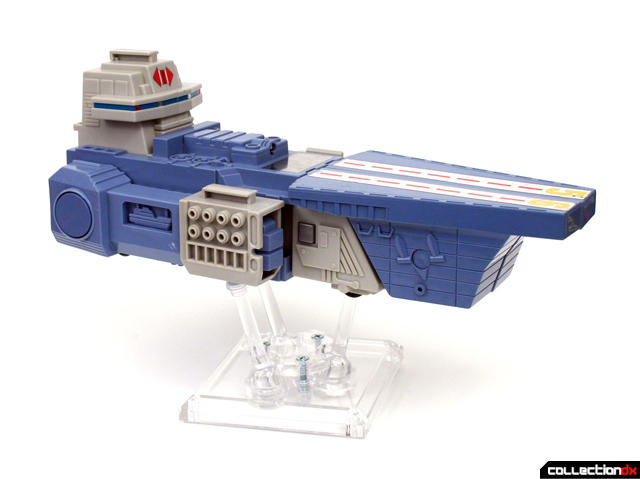 There are wheels on the bottom. 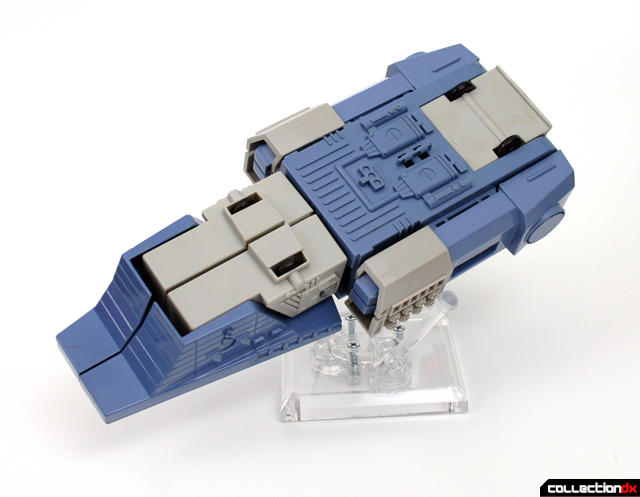 Here he is next to the venerable SDF-1. 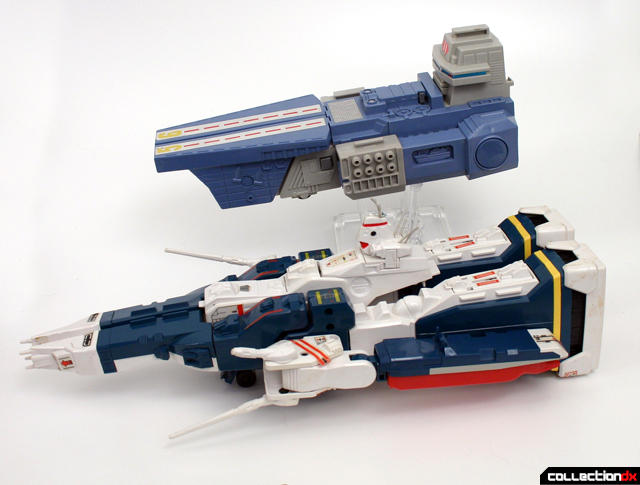 I won’t insult the reader’s intelligence by explaining the transformation in much depth. You pull out the front to form legs, fold down the feet, pull out the arms, rotate the conning tower back.

The resulting bot is surprisingly close to not being awful. It’s still pretty bad, but very nearly a design of its time and place, as opposed to an embarrassingly quaint failure. Either way, it’s awesome. I love that big dumb head, the exact opposite of the SDF-1's beautifully intricate and subtle conning tower 'head'. One could've easily sculpted a more pared-down tower to much better effect, but someone obviously had a vision and just went for the big dumb head. 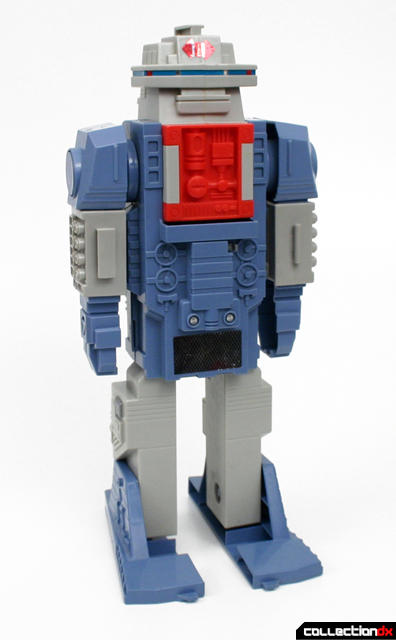 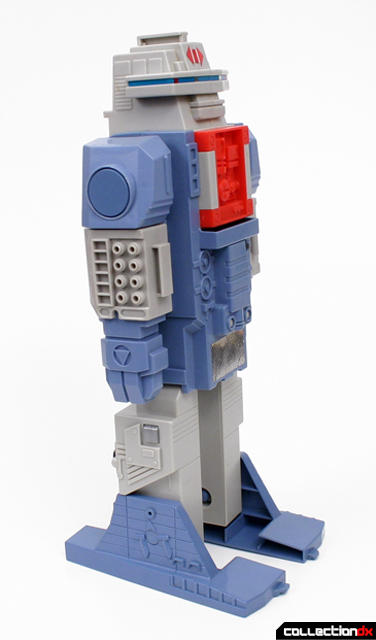 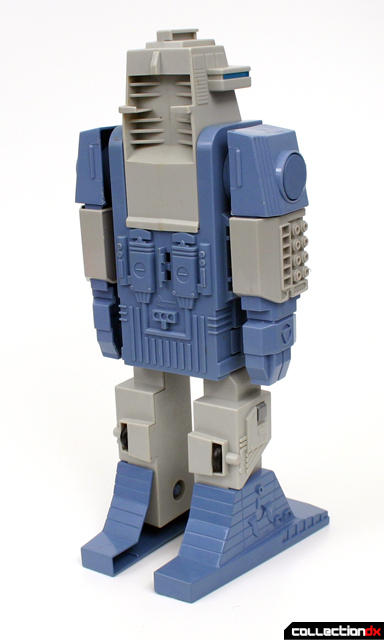 Articulation? What do you think? 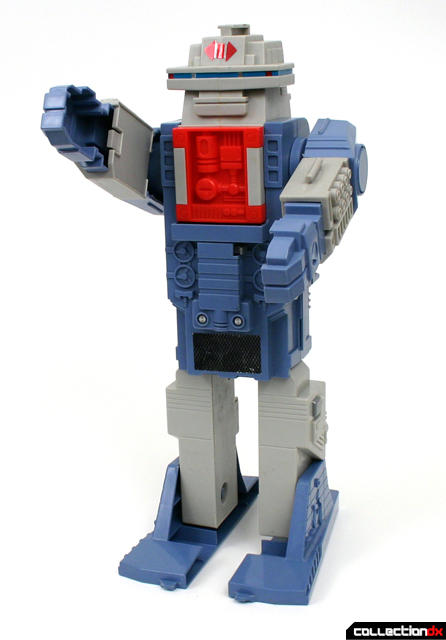 The contrast between the hip Takatoku colors and the sandbox simplicity of the piece really elevates it to something closer to the modern designer vinyl aesthetic.

I really dig this thing. The internet is fantastic, but it's also killed most of the mystery of this hobby. Sometimes I miss not knowing what the hell something is. 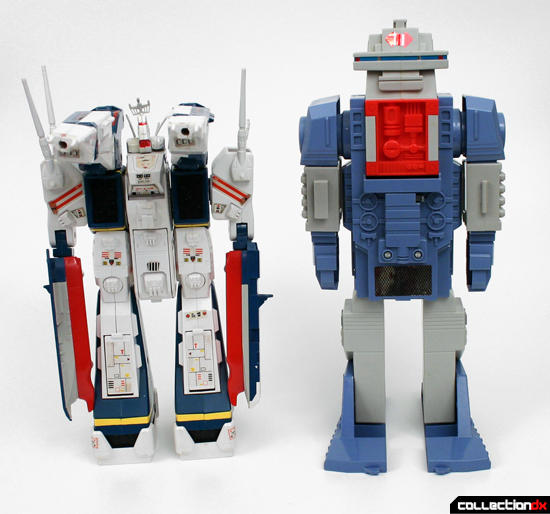 9 comments posted
So if that batter and SDF-1

So if that battery and SDF-1 are anything to go off of, this thing is kinda big. I think that adds to its appeal as a huge whacky robot though.

The shoulders on the Macross are backwards in Cruiser Mode as well as not properly rotating the boom tips, and the legs weren't extended in Attacker Mode so you lost an inch there as well.

20 years ago, I might have gotten a kick out of this toy. Now I don't.

I LOVE IT. Damn, why didn't I get any of this awesome stuff when I was little? All I got was confusing crap Transformers, like Ironhide. I hated Ironhide! He didn't even have a head! This one is clean cut: aircraft carrier and big 'ol goofy robot. It's GOLDEN.

Awesome. I used to have this toy way back, complete with its missle launchers and missles until a couple of years ago when I gave a load of my old toys to my younger cousins.
Great review.

Do you know what went on his arms and head in boat mode? I also theorized that an airplane could be launched with the mechanism on the deck. Did yours have any airplanes included? Any other details you can remember?

I have one, and I'm not sure if your question was ever answered. There was a little missile that shot out of the hole on the deck. No planes came with it that I can recall.

Seeing the top of the head makes me wonder if I lost another piece that could slide on the head.