Dropcloths are light robot infantry, and serve a variety of roles in the WWR universe, from security, to infantry support, and even as paratroopers. The fluff on the Large Martin box even describes how Dropcloths are sent in as close-support units in urban environments after the large Martin artillery units break the siege. A page in one of the World War Robot art books even describe a pair of Dropcloths serving as escorts and guards for a human sniper. Dropcloths are the catch-all light infantry bots.

Then version reviewed here is the 3A Associates-exclusive EMGY (Emergency) Dropcloth. EMGY units are the equivalent of the National Guard, and serve domestically in security and peace-keeping functions. In such a dreary world torn by years of inter-planetary war and religious fanaticism, I am sure EMGY units get called on almost daily. 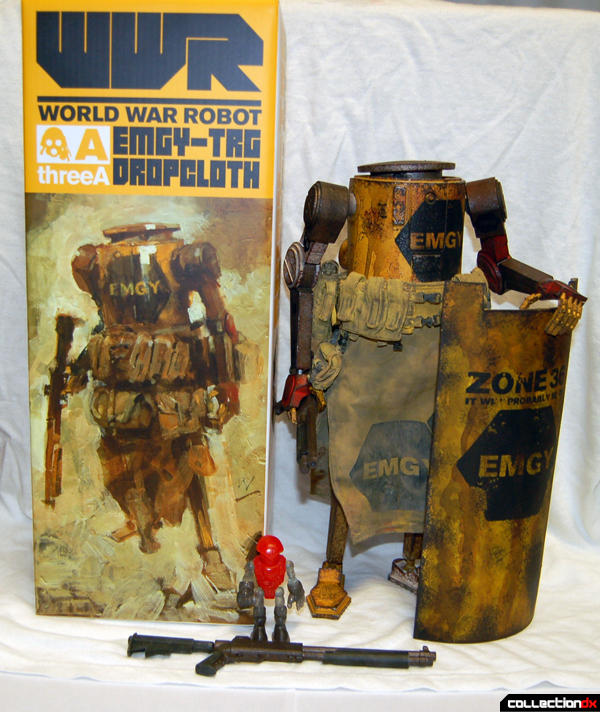 The Dropcloth comes packed in the same style box as the 1/6 scale character figures, since it is around the same size. Gorgeous Ashley Wood artwork depicting the Dropcloth adorns the front and back, and the rest of the box features the very stylish and bold graphic style that we have come to expect from 3A boxes. Opening the box up reveals the Dropcloth, and the accessories secured in separate plastic bags. The contents of the box are the figure with complete webbing setup and holstered pistol, a separate powerplant piece for the back, two shotguns, a baton, and a big, heavy riot shield. 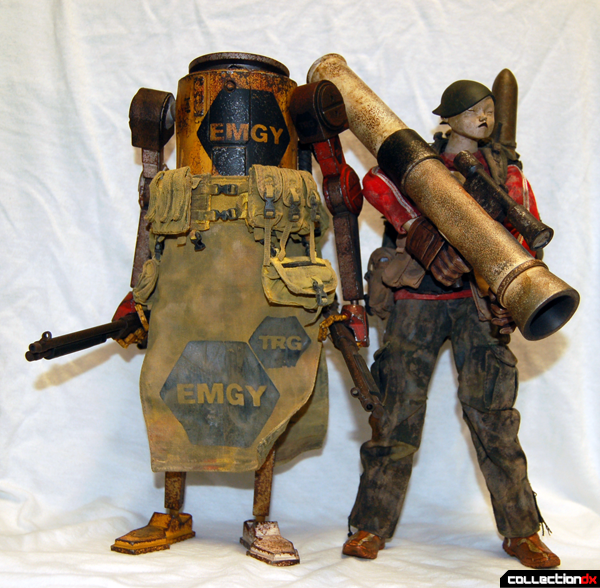 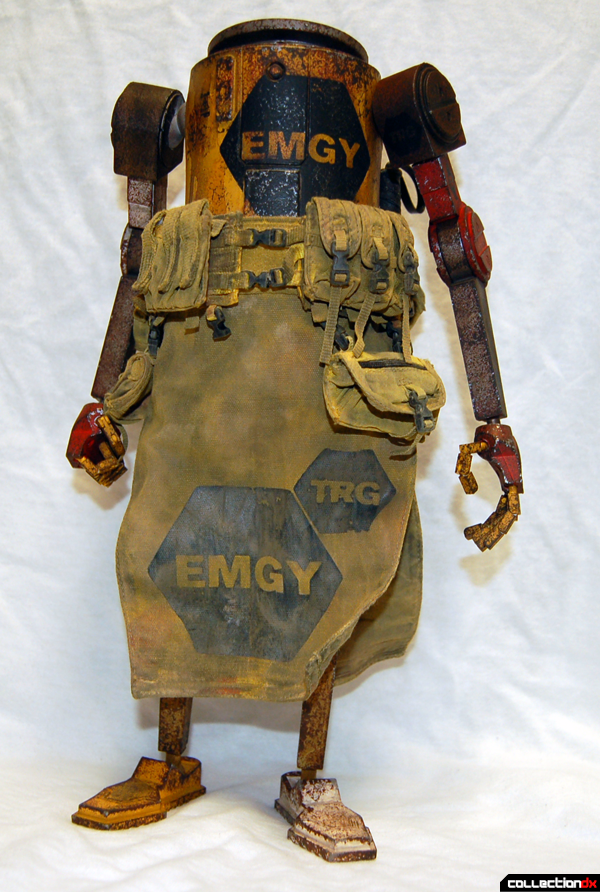 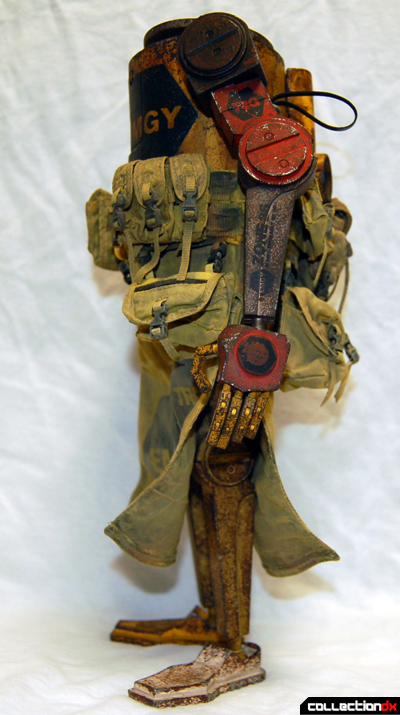 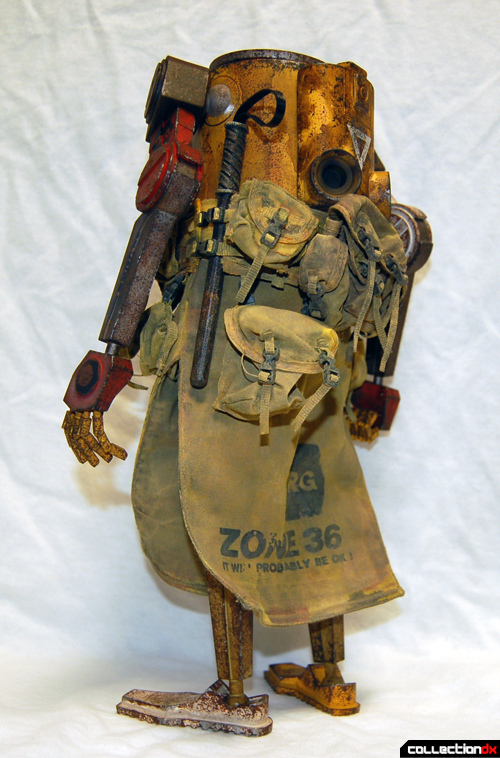 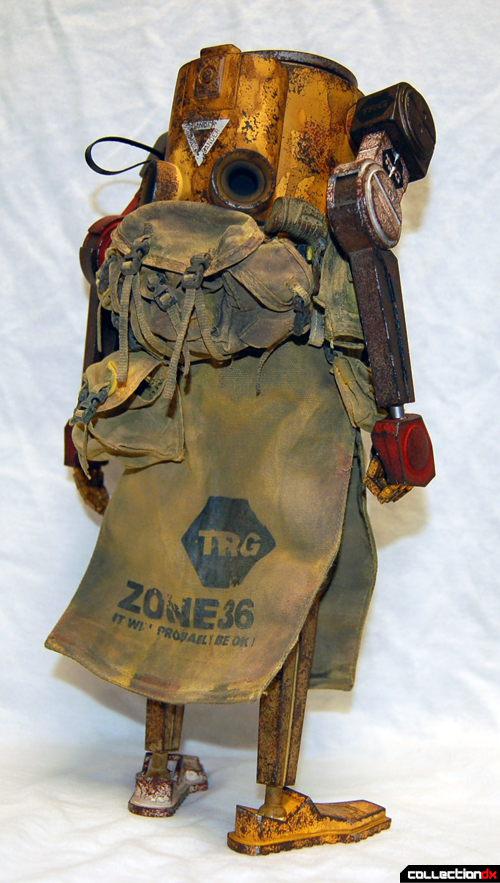 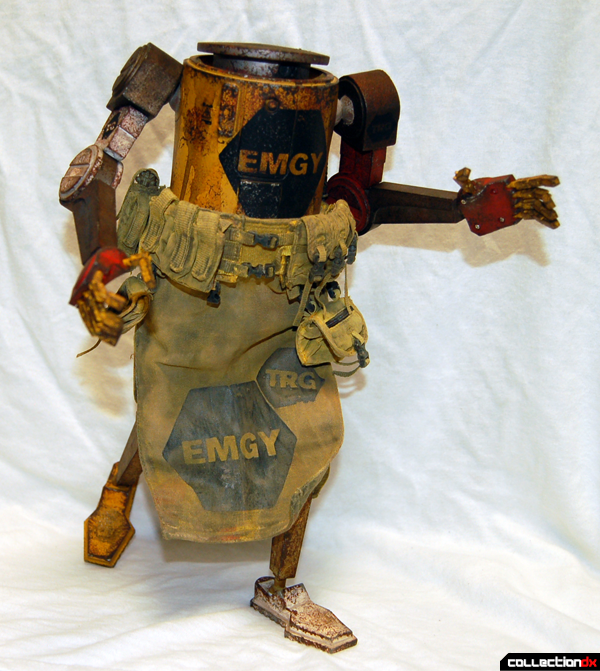 The Dropcloth stands about 13” tall, and is made from durable vinyl and plastic, with every joint articulated, down to each individual finger. Every joint is thought out for maximum posability, including the double-ball jointed shoulders and hugely mobile ball jointed ankles. The joints are all tight, but not frighteningly so like on some earlier 3A releases, and the figure’s big feet make it perfectly stable. 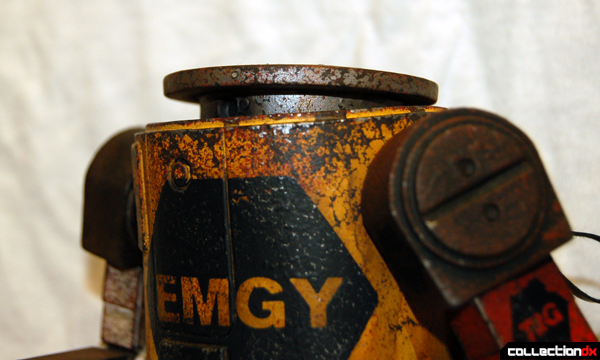 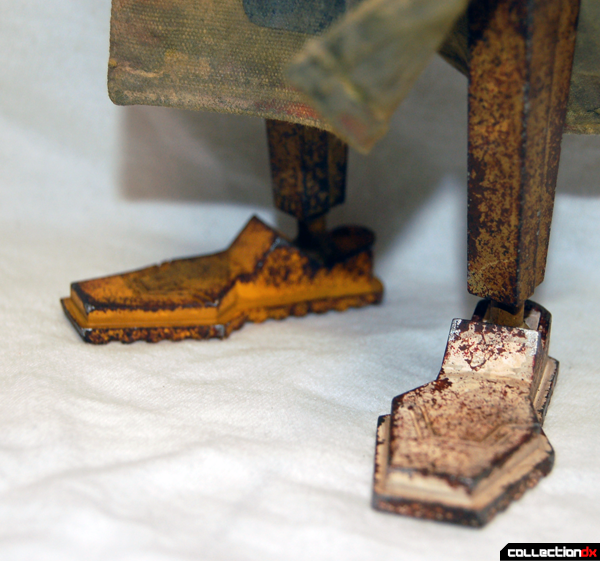 The paint and finish are everything we have come to expect from 3A, with a great color scheme, plenty of decals, and that trademarked hyper-realistic weathering. Everything in the WWR universe has too much demanded of it and does not receive nearly enough maintenance, and the EMGY units are no exception. Even the weapons and gear are weathered, rusted, and dirty. Some of the decals even have that dark humor that Wood’s writing has become known for. The big riot shield reads “It will probably be OK!” 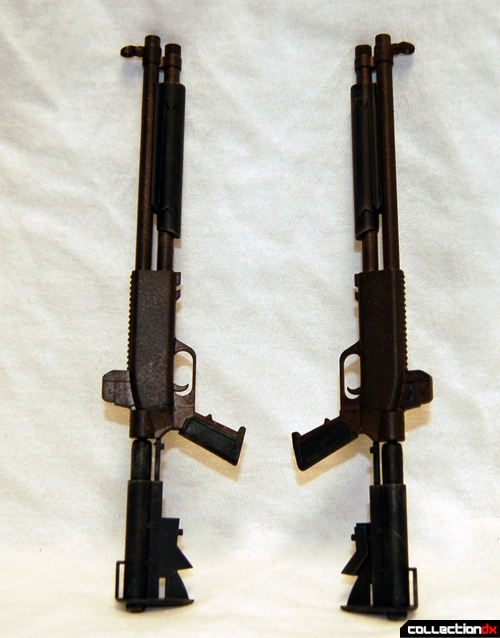 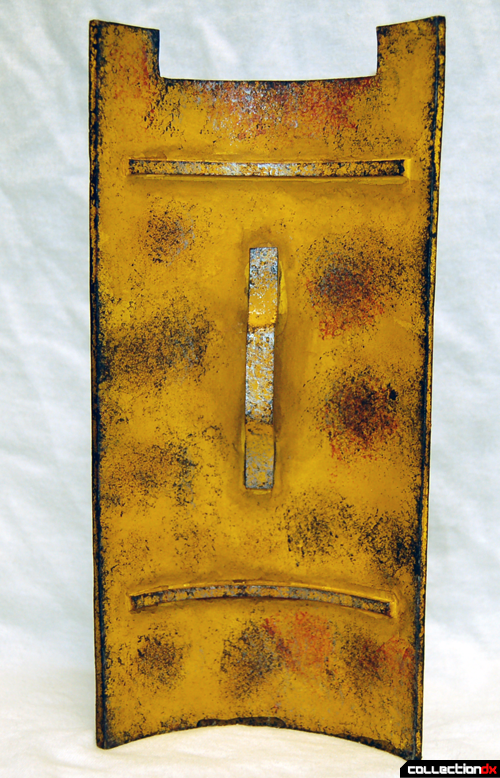 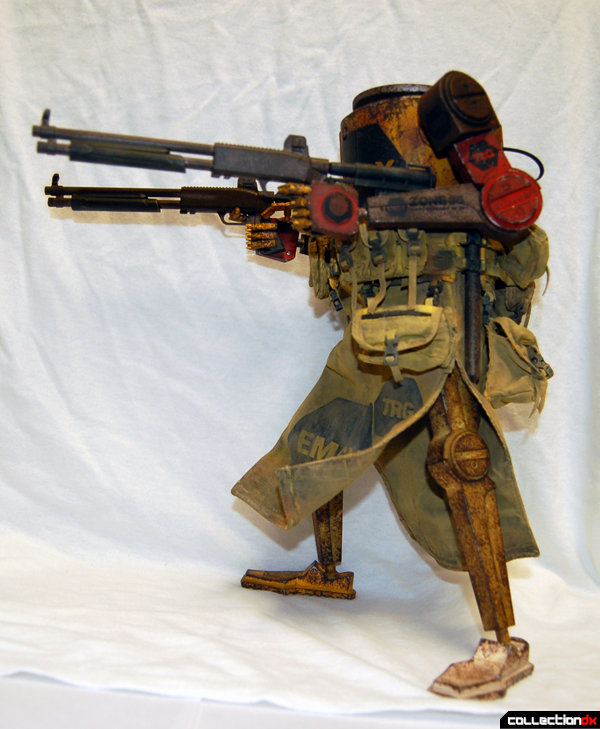 The big thrill of this exclusive version is the accessories. As a security unit, the EMGY Dropcloth features a baton and that giant riot shield. For worsening situations, it also includes two heavy duty combat shotguns, for Akimbo-style dual wielding. 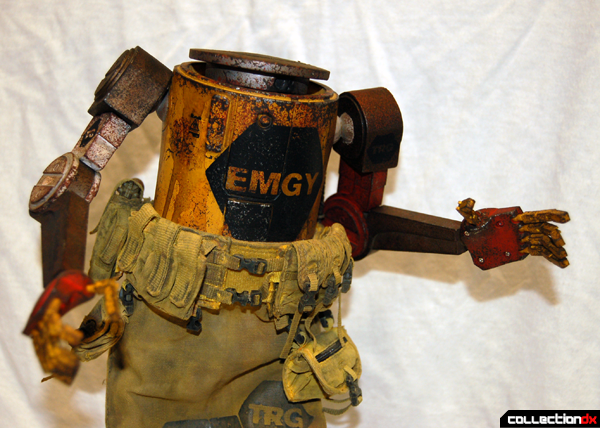 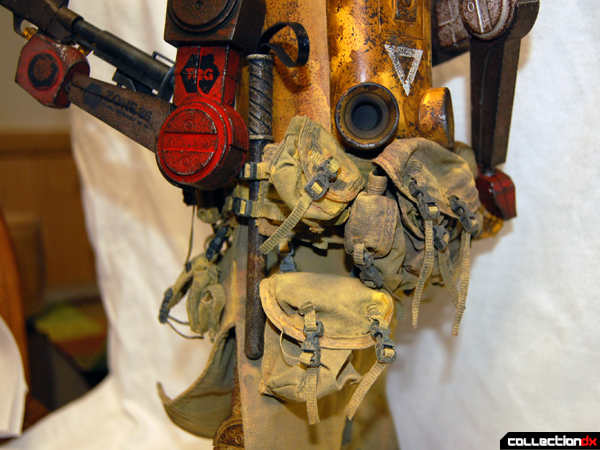 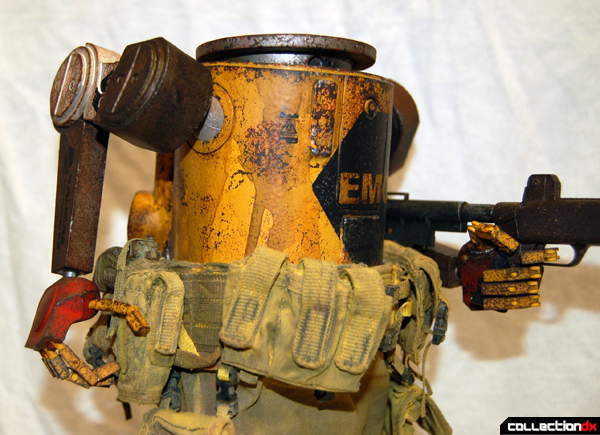 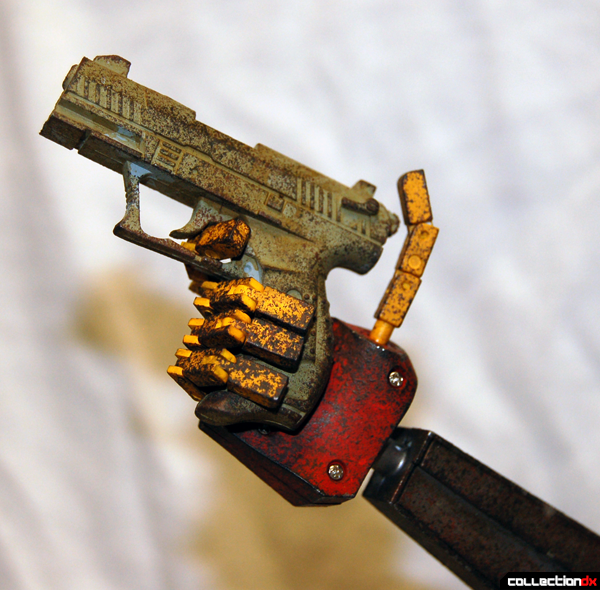 Dropcloths also all feature standard webbing and pouch setups based on what is effectively the robot equivalent of an Utili-kilt. The two-part combat smock provides entanglement protection to the legs, a great excuse for more weathering, and features thin wires sewn into the edges to allow for effective and dynamic posing! The webbing and pouches are all working, with fill-able pouches, working buckles, and a pistol with holster. One thing that does get annoying with the webbing is how the waist pouches do not have a clip to secure them, and their straps just friction-fit into other straps on the smock. 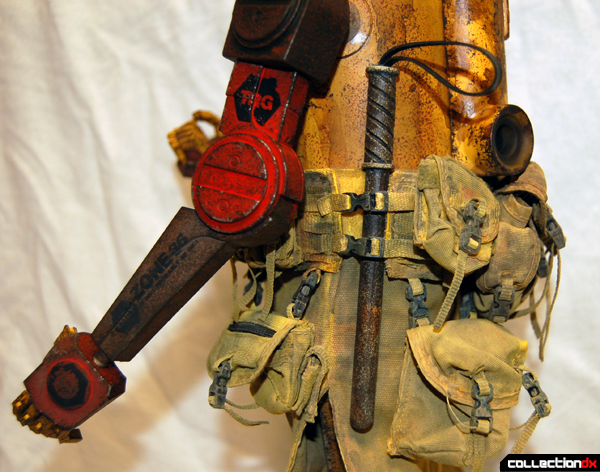 The baton features a cloth handgrip loop on the handle, but does not have a designated place to go. Fortunately, it can easily be tucked or clipped into almost any part of the webbing. 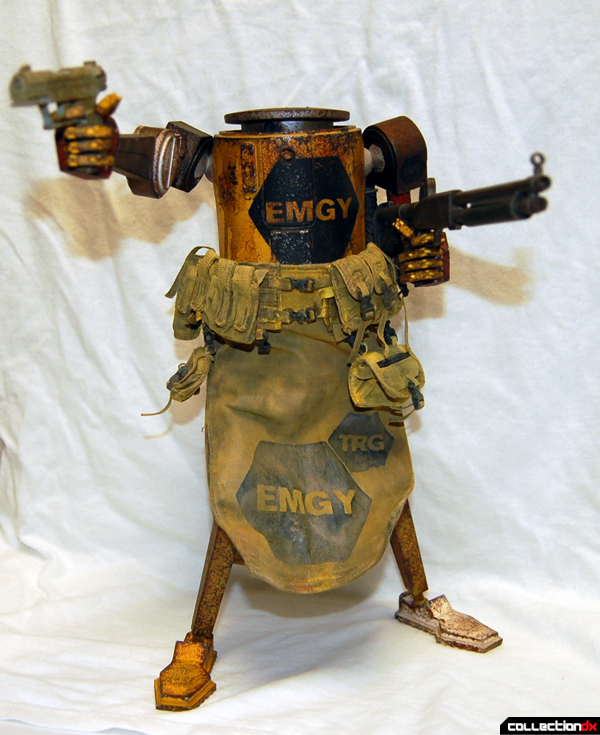 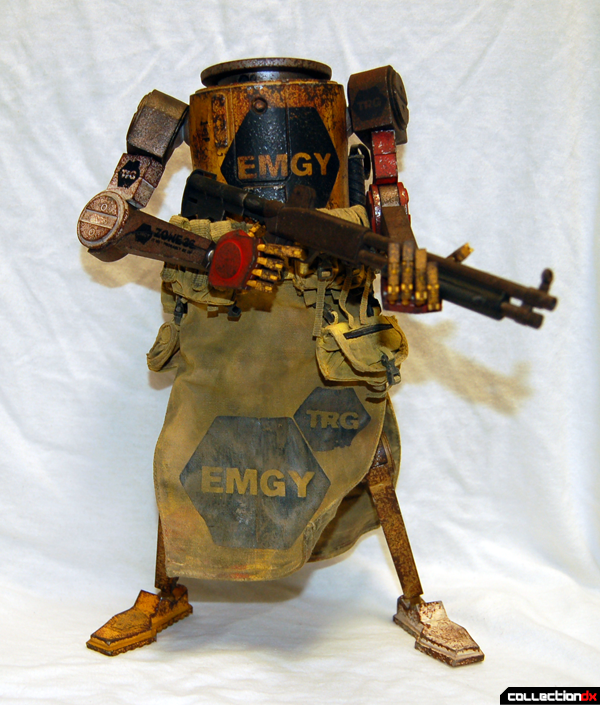 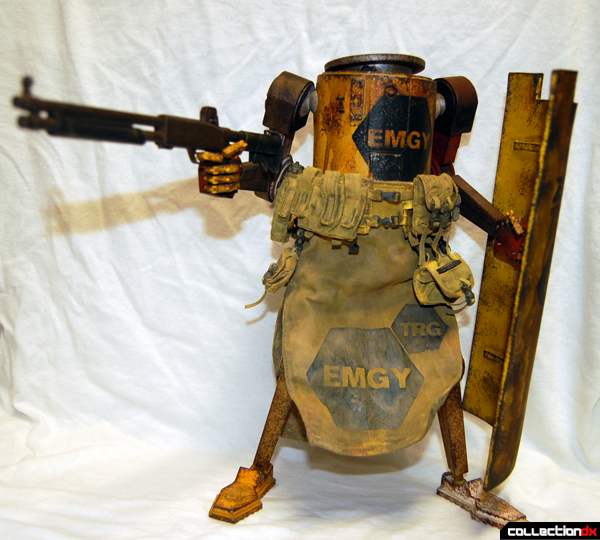 The EMGY Dropcloth is well-made and damn pretty, and looks good wielding any of its myriad weapons. Peacekeepers have never looked so well equipped or badass! 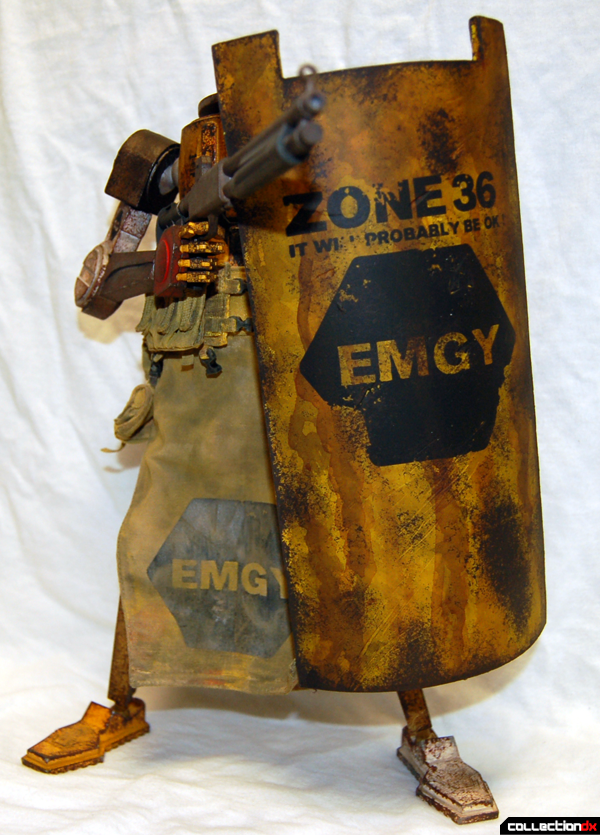 To answer the inevitable question, yes those big shotguns can be used by other 1/6 figures, but not too well. They have very large handgrips for the big robot hands, and barely fit in the largest of human figure hands. 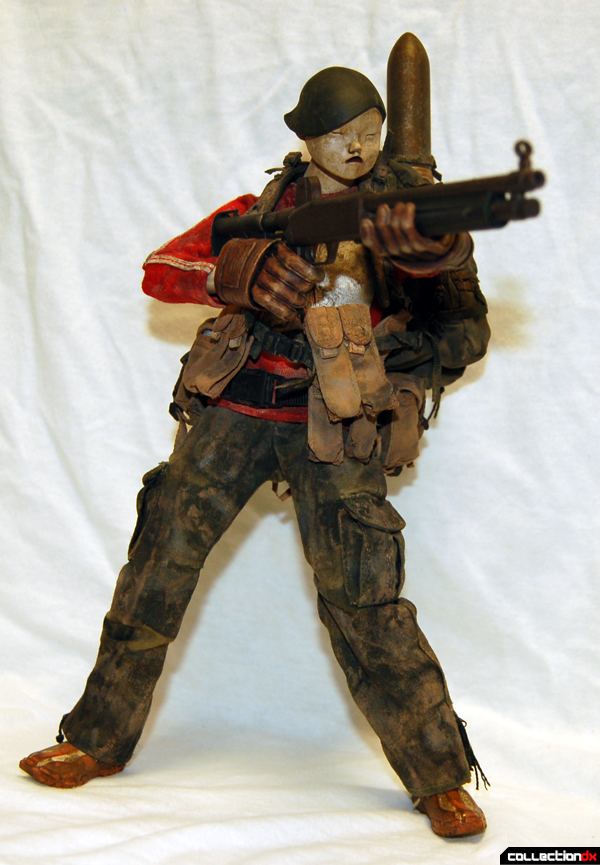 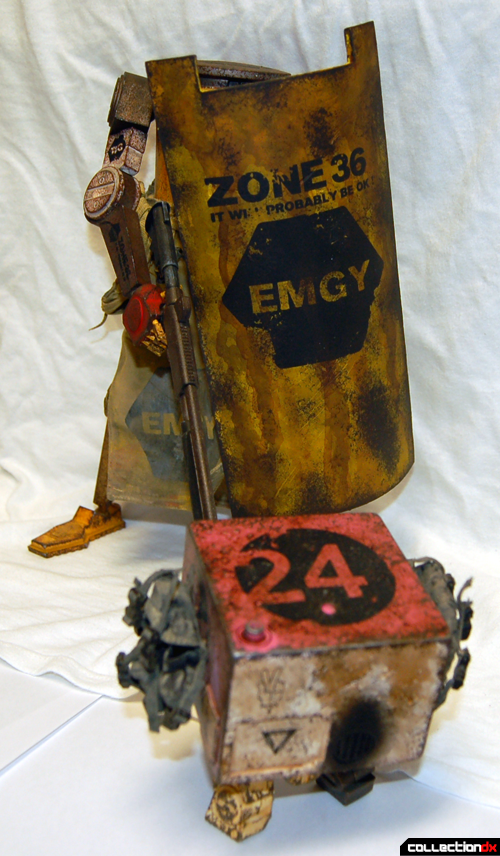 The EMGY Dropcloth is sold out, and was a 3AA exclusive as a set with the Peace Day Square2, which I will review next. There are, however, still some fantastic retailer version Dropcloths available for sale from such fine retailers as Big Bad Toy Store and Sideshow Collectibles . If you are interested in 3A toys, the Dropcloths make an impressive showpiece, while still being manageably sized and pretty fun as toys. I really like these figures, someday I will have to pick one up. I was surprised how big these figures really are and how good they felt from a relatively unknown manufacturer.

Great review and pics!
This is one of my favourite WWRs, I love the EMGY paint scheme and hope that we see it again when the WWRp Dropcloth sets are released. Unfortunately he is almost impossible to get now under $300, which sucks ass because it's so damn awesome.

I loved this review, and it got me thinking just by looking at some of the pics. Wouldn't i be great to discuss how clothing looks on some of the modern robots? would you wanna keep it or lose it? i remember seeing Black getter's cape for the first time and loved that they kept it for the figure.

One day...one day I will have at least one of these figures. I love robots, and I love the style of robot that's all rusty and junky looking. This series is awesome, but expensive. Still, everyone gives these great reviews, so the money sounds well spent.

They are relatively inexpensive if you can buy them on sale day or retail versions at retail prices. For example, you can grab a retail WWRp Large Martin for around $50 delivered from a number of online retailers right now. That is a bargain for an awesome piece of articulated art.
They only get expensive if you buy sold out 3A toys from ebay scalpers.