One of the biggest recent trends in Hollywood blockbuster movies is the fixation on superhero franchises. Batman, Spiderman, The X-men, The Fantastic Four and others have all graced the silver screen in the last few years. So it was only a matter of time before Superman returned to movie theatres accompanied by a flood of merchandise. Though the movie has not yet been released, the toys have and chief among them is Mattel's latest 30" action figure. The previous two were Spiderman and Batman and like those, this toy is a WalMart exclusive.

The figure comes packaged in sort of half box, with Superman standing inside and tied to the back with twisty ties. These are generally a major annoyance to most adult toy collectors, but this time even Superman's cape is attached to the back of the box via a thread. It seems to pull away with ease but I was careful with mine, and I worry that a child tearing into it with excitement might cause some damage. It seems like a bad idea to me since the cape isn't going anywhere anyway. 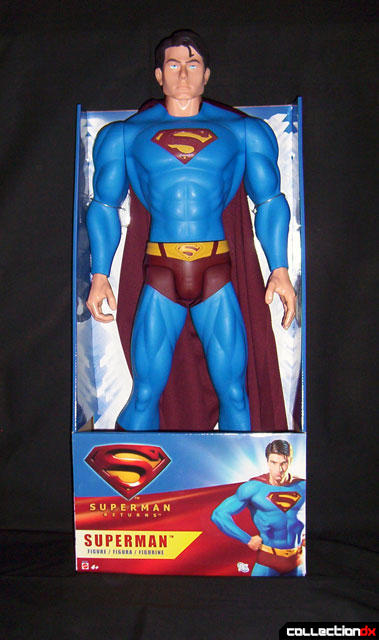 On the plus side, Mattel did something sort of cool with the back of the box. Rather than have ads for other toys like in the previous releases, there is full color artwork on the back that can be cut away and used as a poster. 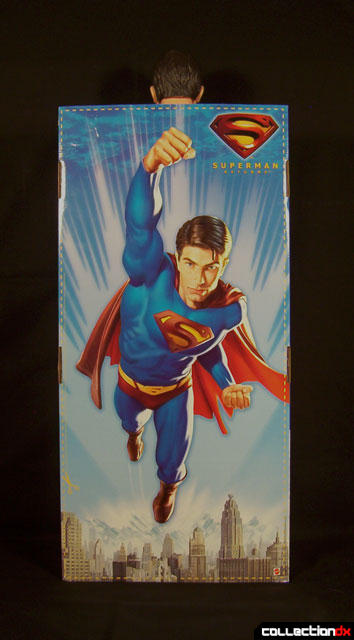 Furthermore, cutting along the lines also gives you much easier access to the ties in the back if you prefer to actually untie them rather than cutting them from the front. They aren't too difficult to get to from the outside of the box, but you can do it this way as well. Of course, doing so will destroy the packaging. 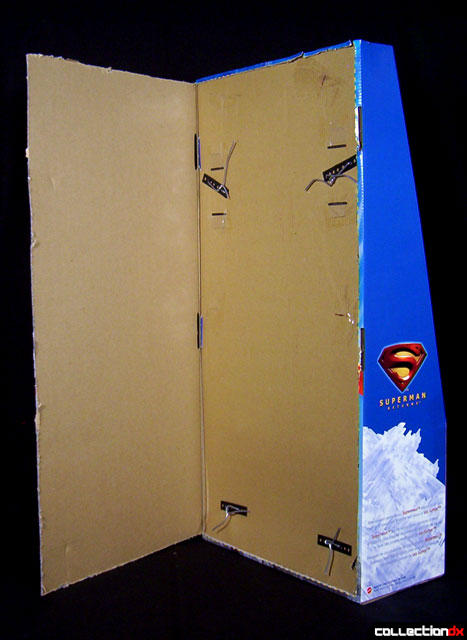 The toy itself technically stands about 29.5" tall and is intended to represent the likeness of Brandon Routh, the actor who portrays the character in the new movie. This means old school fans may be less than thrilled with it's look, especially since the costume is slighty changed. The color of the cape and boots, etc is a more brownish-red than the classic red we are all used to. With that said, there is some nice attention to detail on the toy. Not only are the boots nicely sculpted, but even the free lock of hair on his forehead is a separately molded piece of vinyl, fixed into place by protrusions that are inserted into holes in the head. 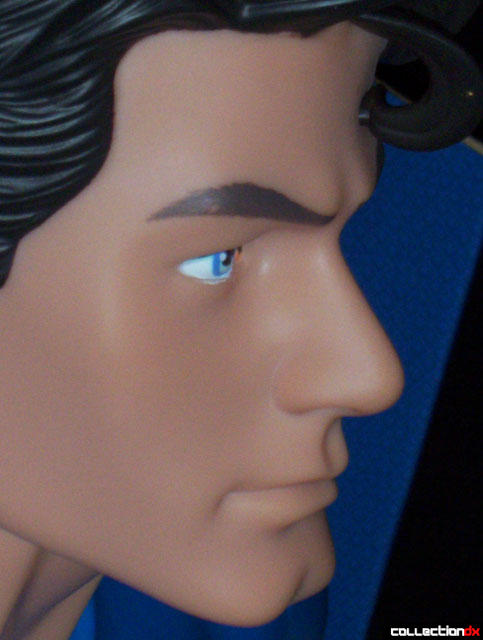 One thing I found to be slightly odd about the toy is that each hand is fixed into a different pose, the left more open as if ready to shake your hand, the right slightly clenched as if he could hold something in it. I'm not sure if there is any significance to this that might be explained in the movie, but if not, I find it a bit annoying. I'd prefer some symmetry.

The toy features 8 points of articulation (hips, waist, wrists, shoulders and neck). Unlike the Spiderman and Batman, Superman's neck features a ball joint which allows for much greater range of motion. I think this is a very welcome addition.

It should also be noted that advance advertising for this toy featured a picture that differs drastically than what was actually released. The image that was solicited for online order (seen below) showed a Superman with a much wider stance and outstretched arms and appeared to be more of a statue. I'm not sure if this is a picture of another toy or a prototype or what.

Overall, there's not too much to be said about this toy. If you like big toys and are a Superman or comic book fan, it's certainly worth getting. But I suspect that if you didn't get the Spiderman or Batman, you likely won't be getting his one either.

I looked this up because I bought the 31" (ears count?) dark knight figure. The Dark knight rises version has tons of detail, you can see every stitch and zipper tooth. It feels very much like a cg scan of the real deal was involved since the proportions and detail is so crisp. Speaking of proportions the dkr is rendered in a very particular static pose that indicates great weight in the gauntlets. This makes it work fine for fans of arkham city as well. I really like the dkr 31" and was hoping to find more figures like it. This superman looks to be lacking in detail and the physique looks a little derp. The colors are even wrong according to the box. I might just hope there is a man of steel 30" coming this year.