Between reading IDW comics and rewatching the G1 cartoon again, one character that I found myself really falling in love with was Perceptor. Something about his nerdy personality and amicable attitude really stuck with me in the cartoon. Then he turned into an insane hardass sniper in the comic which made me like him even more. Funny how that works out.

Right around the time that I was really getting to like Perceptor, the 25th anniversary G1 reissues were still floating around ToyRUs. So I bit the bullet to get one since I liked the character so much, and man I was glad I did.

I'm not one for mentioning packaging or keeping it for that matter, but Hasbro did a fantastic job for these reissues. Nice glossy artwork on the front, with an opening window to look at the toy as well. 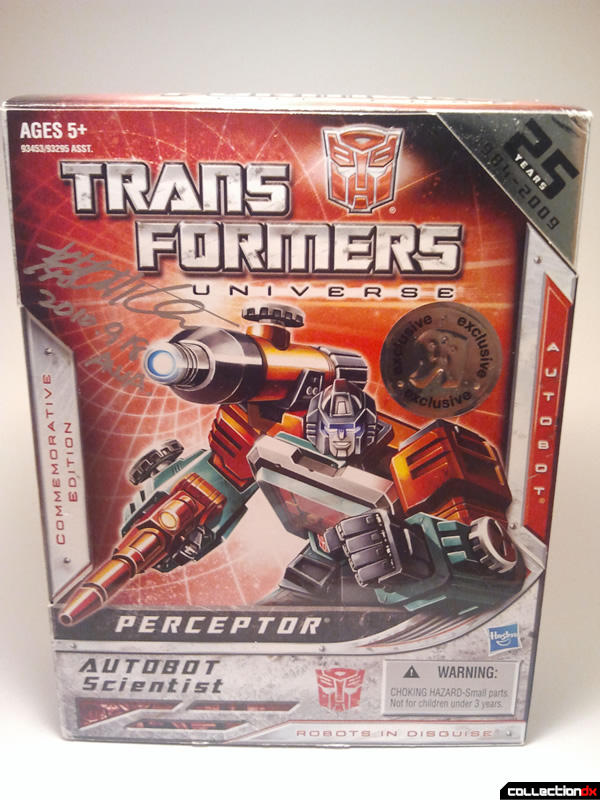 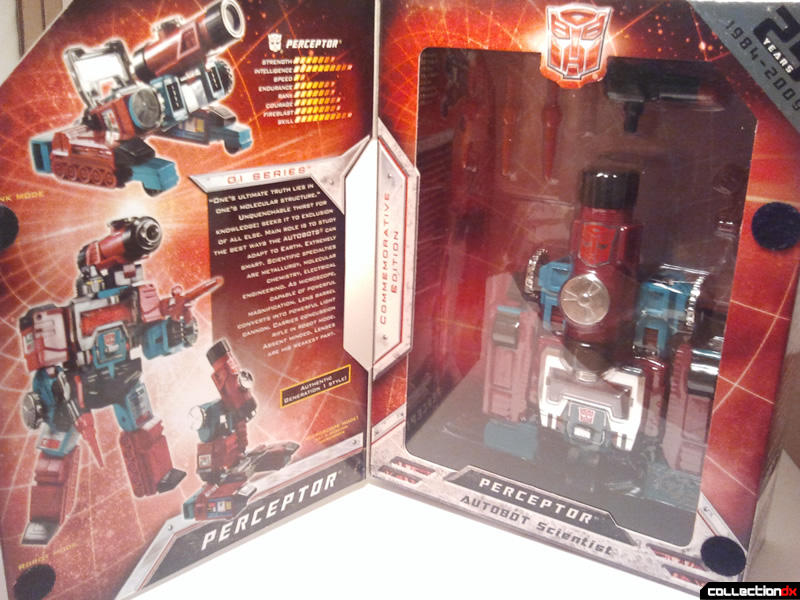 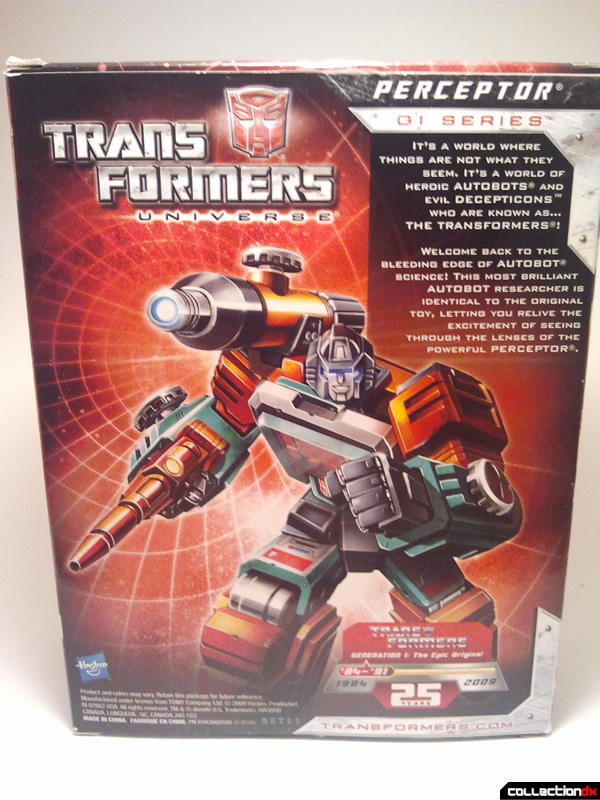 When you get Perceptor out of the packaging, he's kind of arranged like a Tetris block and you need to Transform him a bit more properly. Once you do though, you get a very good looking blocky robot. 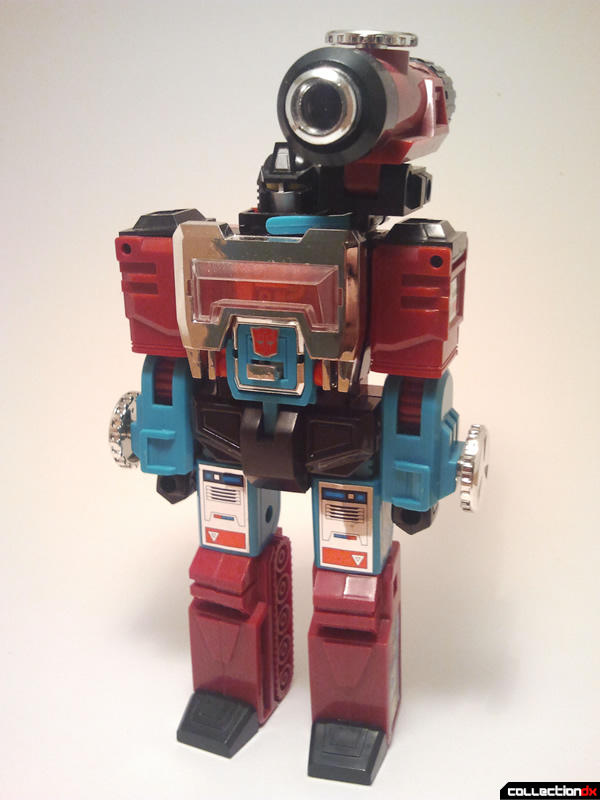 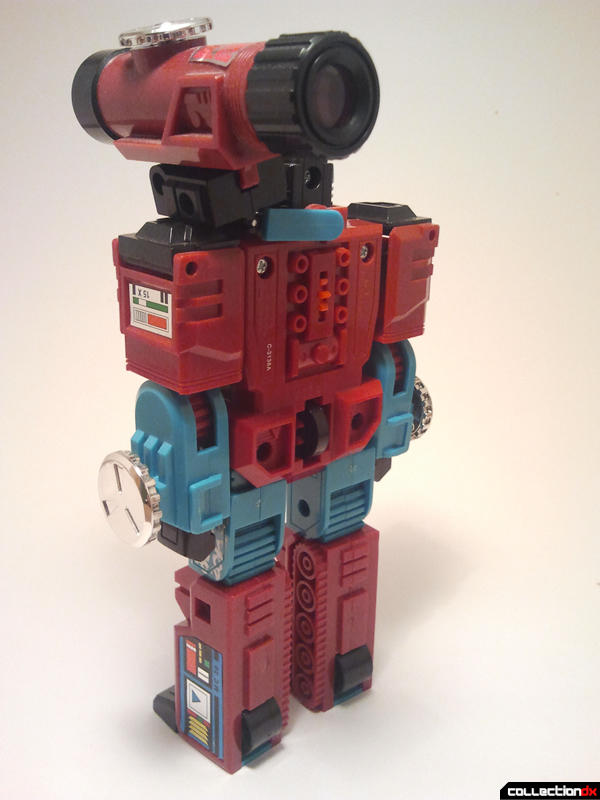 Admittedly, the head looks nothing like the cartoon Perceptor. It still is a pretty nice looking head though. 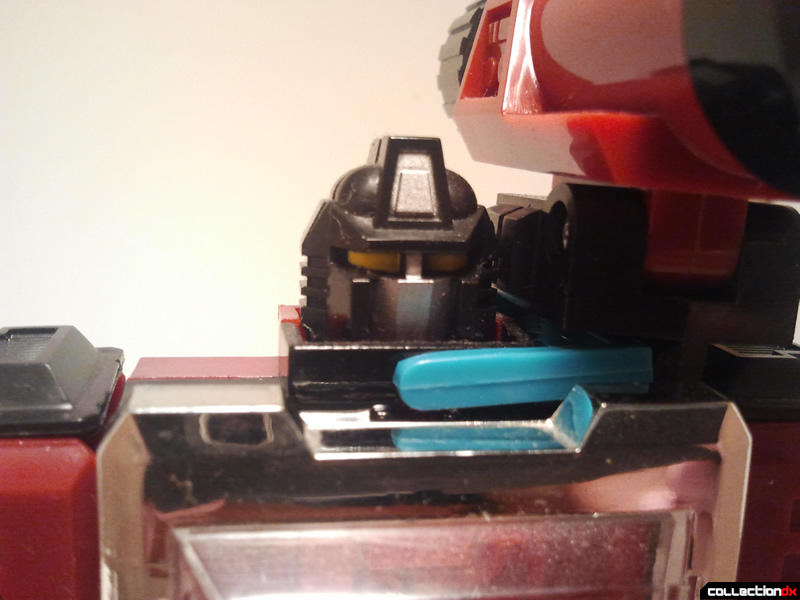 As far as G1 toys go, Perceptor's got a good bit of articulation. Arms, and legs move, as well as the elbows and knees too. Of course you can't do much with it, but moving parts are always a plus. 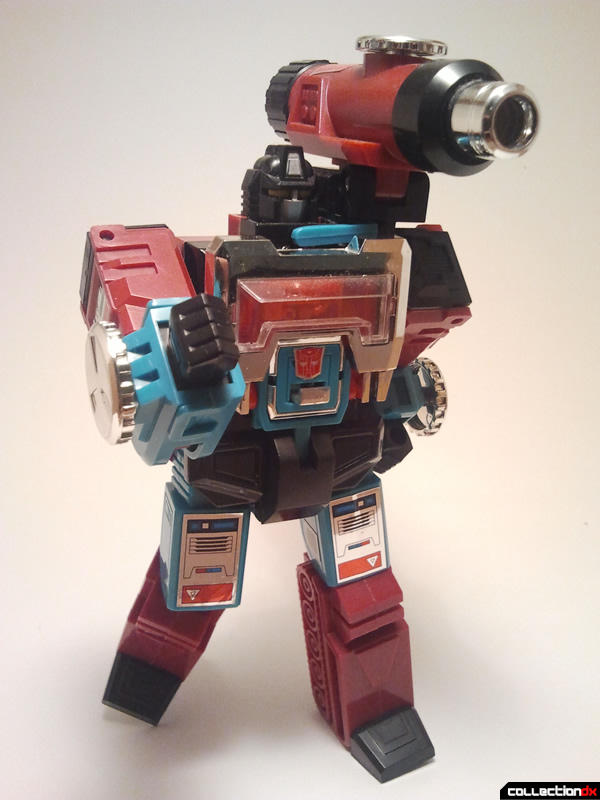 Like most G1 Transformers, Perceptor has a rubsign. However, his is placed on his inner thigh. There is something oddly dirty about that, yet somehow, seemingly in character with Perceptor to me... 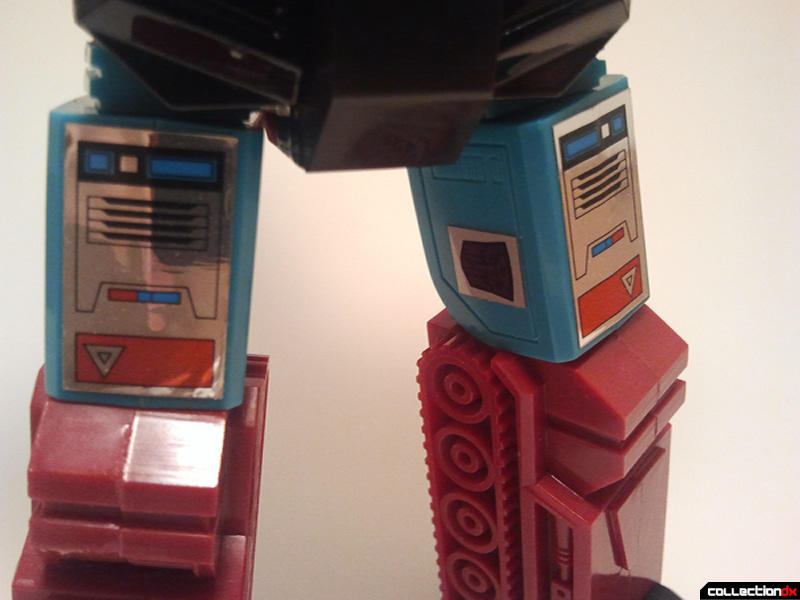 Perceptor comes with two guns. A molded sniper rifle looking gun, and a missile launcher. However the missile launcher is non-functioning for safety reasons. The worst part of this is that three missiles are included to taunt us. 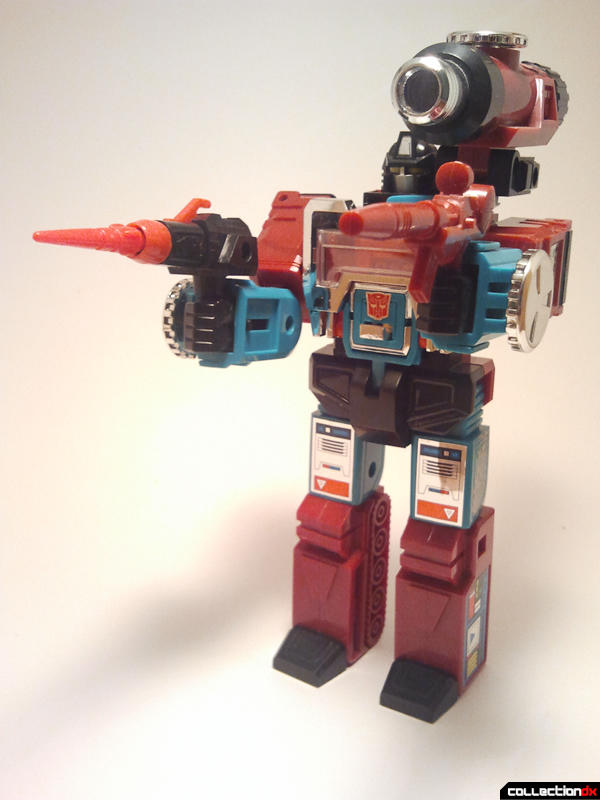 The most memorable thing about Perceptor is that he was the Transformer that turned into the microscope. There's not too much to say about this mode. All things considered, it's a pretty good microscope mode, with the turning knobs on the side and the huge lense. The box unfortunately says in capital letters: "NOT A WORKING MICROSCOPE." Shame. 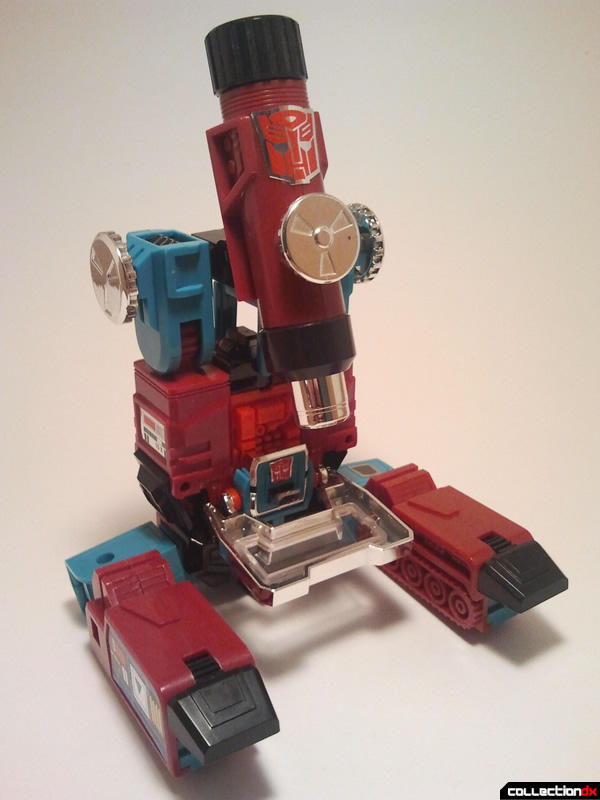 Everyone remembers Perceptor as being the Microscope Transformer. What no one seems to remember is that Perceptor has a third mode. With a little bit of folding and barrel extending, Perceptor transforms into the smartest tank mode ever. This mode is another remnant of the Microchange line, where a tiny little figure would ride the tank mode. With no little figure to drive the tank around, it just looks rather silly. It does roll pretty well though. I don't know if this counts for triple changing, but it's still a neat fun little mode. 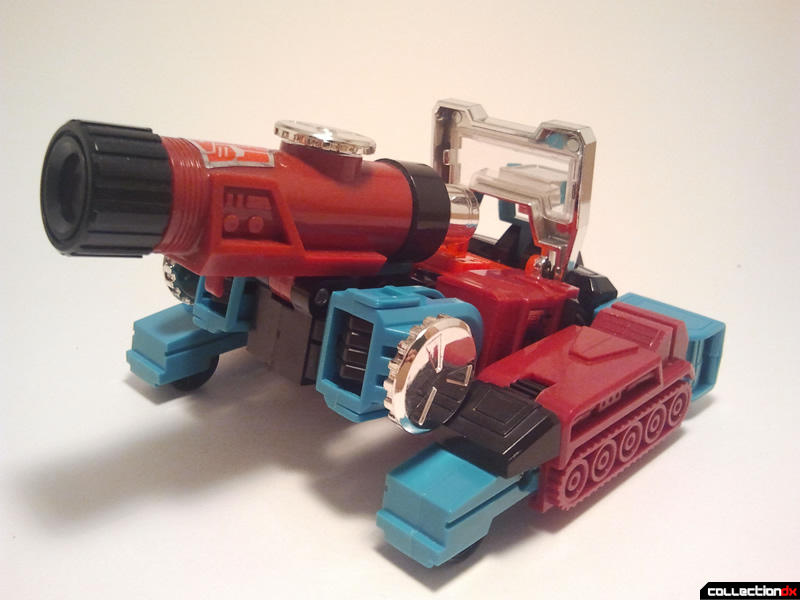 Plus if it doesn't have enough weapons, you can always pull the knobs off of the forearms and switch them with his guns! 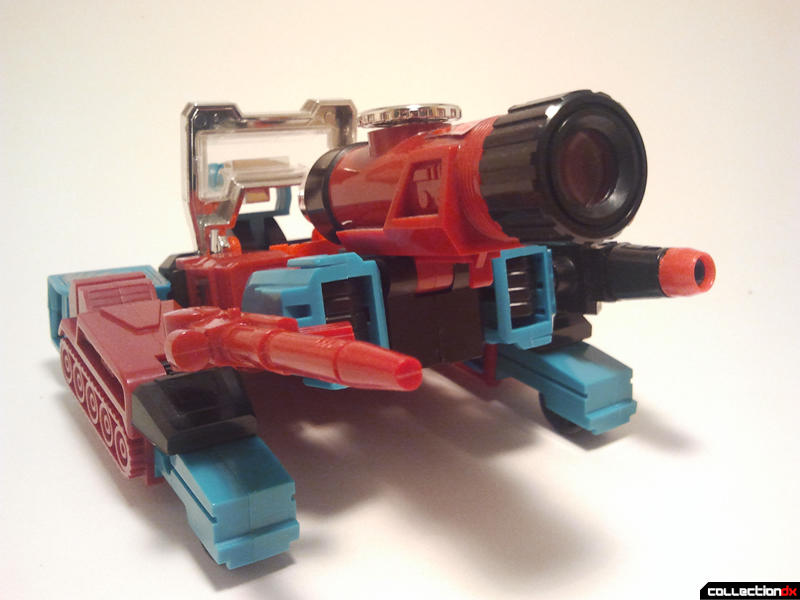 At the end of the day, Perceptor isn't one of the more iconic or memorable Transformers toys. However, it's still such a load of fun to mess with. It's just a nice solid robot with guns and an even slightly bigger gun on it shoulder that can also be used for science. I see nothing wrong with that, and think that everyone should have one. 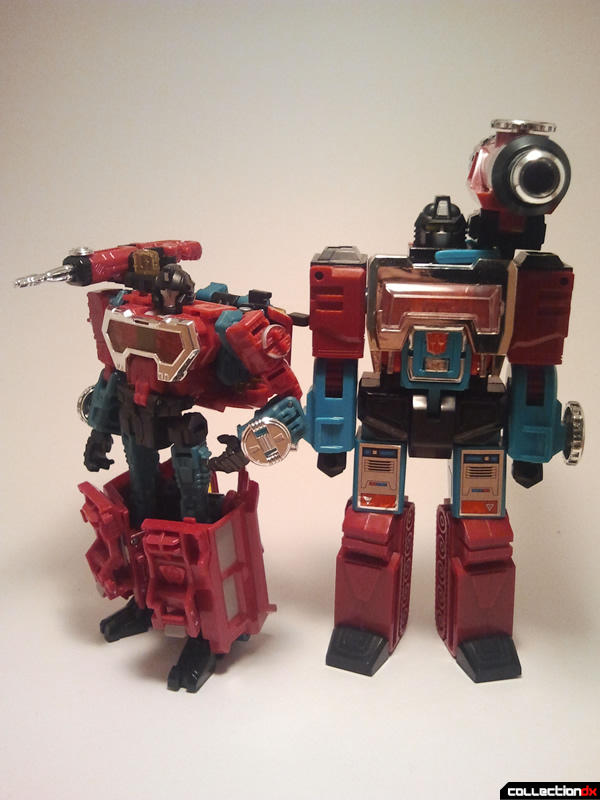 I remember my first (G1) Perceptor was the unfortunate victim of "surgery" with my brother back when we were kids. He always had this obsession with breaking down 'broken' toys to bare parts and limbs. All that was left of the Science Sniper was half of his left leg and one missile. Its great to see characters like this get the treatment they deserve in reissues and AFFORDABLE ones too! Great review. Who signed yours?

Thank you sir. I've seen several loose Perceptors ever since I've gotten a hold of mine, and I'm often left boggled at how beat up they can be, especially considering that Perceptor feels like one of the sturdier older Transformers.

The box is actually signed by Shinji Aramaki, who was at Anime Weekend Atlanta 2010 last year. It's on his resume that he designed the Perceptor toy, although that seems to actually be slightly up in the air.

Damn, I wanted both the reissue and Universe versions of this guy...

The G1 release is a working microscope. It only goes up to 14x magnification but it's still there.

I used to owned the black one, is it from Microman? And it's a working microscope.

I guess I should have specified that this version was the one that said not a working microscope, and that the original did function. At least, I'd hope it would, considering the old commercials for the toy had kids putting rocks on Perceptor's dish to examine.

And yeah, the original Microman version of this toy was black.

I'm glad I got 2 G1 Perceptor reissues because the ones I own are part of the Transformers Collection series which was released in Japan though G1 Perceptor's Missile launcher has a spring-fire gimmick whilst the Hasbro 25th Anniversary version has not Spring-fire gimmick due to Toy Safety in America.

While restoring the microscope functionality would require canibalizing a real microscope or a damaged original release, there is a fix for the launcher (also works for Hasbro 80s release) that I've used on several of my Transformers.
Take the spring out of a cheap clicker pen or something, open the launcher up (Or if you're lucky you can just ram the spring down the launcher throat) and insert the spring, close the launcher up. Boom.