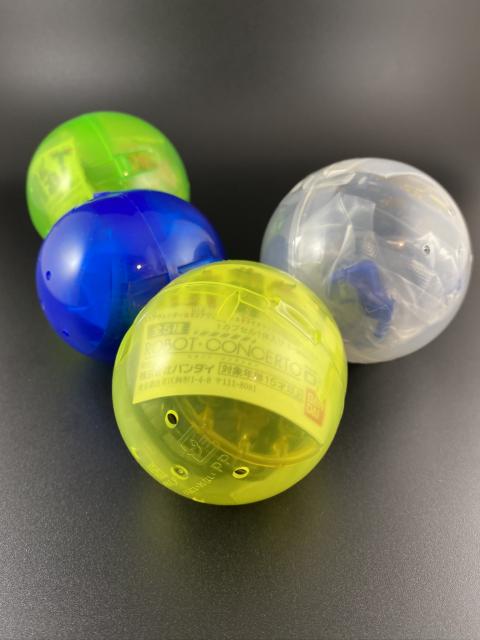 ‘Elsewhere’ must mean wherever I am, because I love these things. From anime tchotchkes to sought-after collectibles, this genre of toys sells millions of units each year for the price of pocket change at any of the hundreds of thousands of coin-operated vending machines scattered throughout the country. And while stateside fans like myself will certainly miss out on the symphonic clinking, ratcheting, plopping rhythm of the machines followed by the thrill of surprise before breaking open the capsule, it won’t quench my fire for really awesome robot toys. Frequently gashapon lines are released in sets which are re-released as boxed sets- the same goes for blind boxed collectibles, but this review is all about the capsule. I find it necessary to make the distinction between the two because my experience with Bandai’s newer gashapon lines have really opened up the possibilities of what is possible to do with the genre. 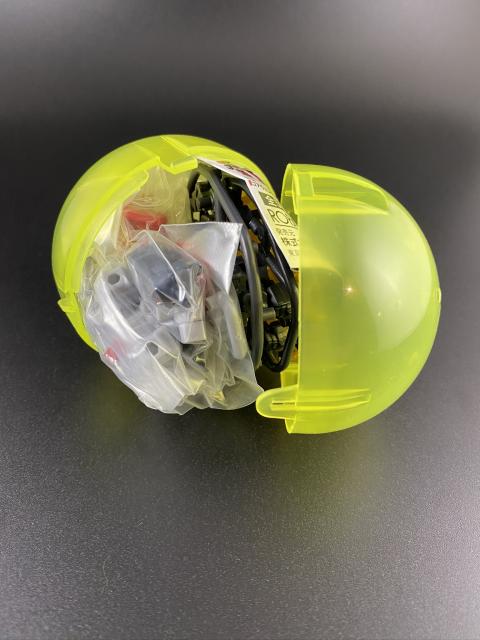 Robot Concerto consists of a mix of mecha figures and parts packs. Instead of a line-wide aesthetic, each volume of Robot Concerto takes design cues from different mecha genres, with Volume 2 being heavily influenced by Super Robot aesthetics. This formula ties the whole line together thematically along with the body proportions of each figure which fall somewhere between an SD and NXEDGE style figure. They found a nice balance here. Still rather stumpy and cute but not too exaggerated. 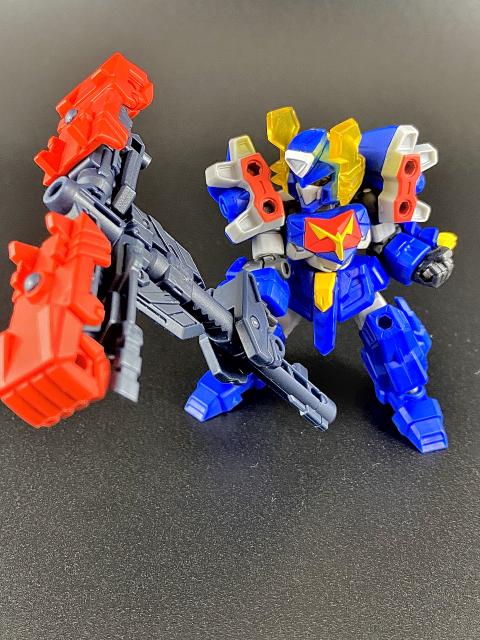 What’s really impressive is the standardized inner frame used to build each figure, which consists of two sprues for the body and limbs plus a stand. Pre-painted elements like the head and armor are pre-bagged. All of the above plus a tiny instruction sheet are included in each capsule. Volume 2 features two figures. 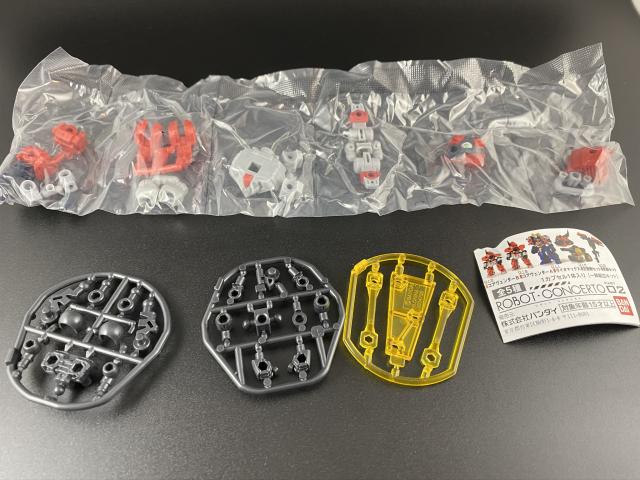 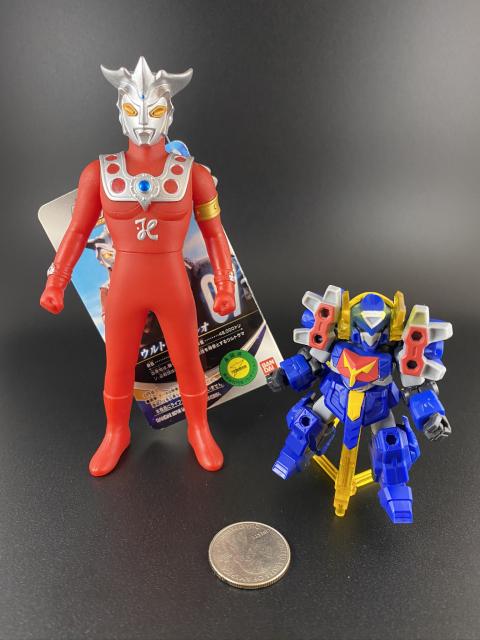 From head to toe- articulation isn’t anything stellar, but what is here gets the job done well enough. While it can be very challenging to get any dynamic poses out of these guys, static poses aren’t a problem and look quite good. Ball joints for the head and ankles can get you some expressive movement and stability. The shoulders can be raised or lowered via a peg and loop construction and connect to the arm via ball joint. This little bit can be very important for making room for parts attached to the shoulder so the arms don’t collide with the head or knees. There’s a side to side bicep swivel, an elbow hinge, and full wrist rotation. There’s also a very small ab crunch facilitated by the inner frame, but it’s so subtle it hardly makes a difference. There’s full waist rotation and ball joints for the thighs, which are so short they are frequently impeded by the skirt armor. A decent knee bend makes up for it somewhat. 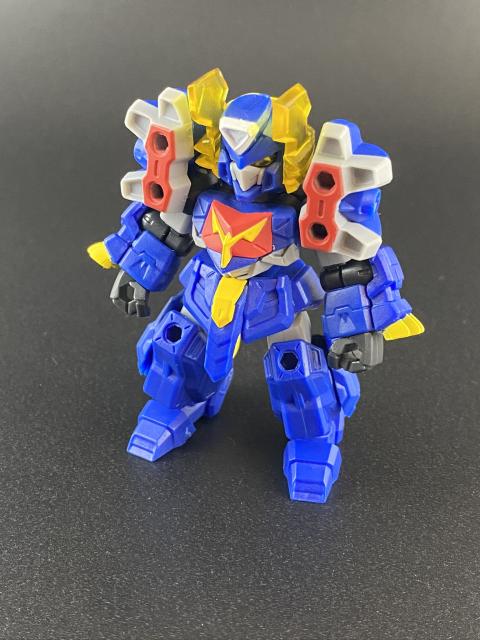 We begin with Liobot, which takes its design cues from 90’s super robot series. Just by looking at that big chest emblem I see a lot of Brave and Sentai influence in this little guy, which makes me really happy. 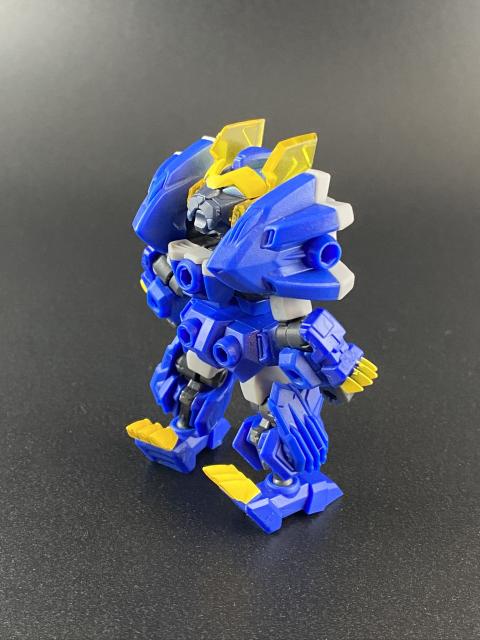 There’s also a little bit of Optimus Prime thrown in there for good measure, with the head and those huge double-barreled shoulder blocks very much evoking G2 Laser Prime. I really appreciate how Liobot pulls off all these different things without being generic or too derivative. Again, Bandai found a great middle ground design wise. The big colors here are a take on the classic mecha tricolor- blue, yellow and red. There’s some gray and trans-yellow highlights as well, and they look absolutely stellar for the head. Distributed along its tiny frame are a whopping 17 3mm ports to facilitate customization. By removing some of the armor, even more of the ports can be utilized. The inner frame is black. 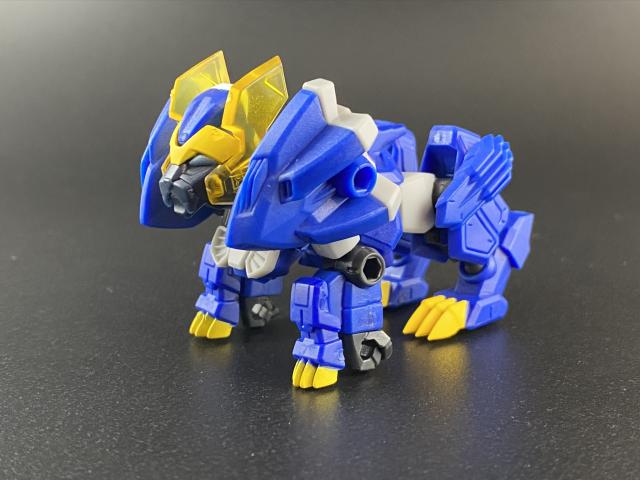 Liobot can also pull off a great transformation scheme at this scale, which those who have owned a cat-to-robot transforming robot will find very familiar. The liger mode manages to come off as both cool and ridiculously adorable. 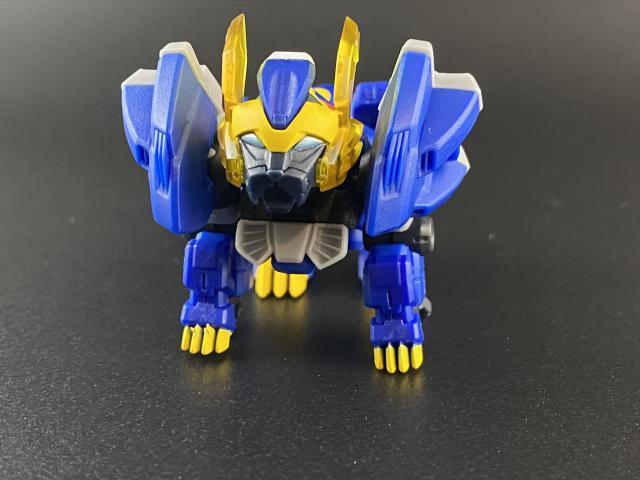 Just look at that face! 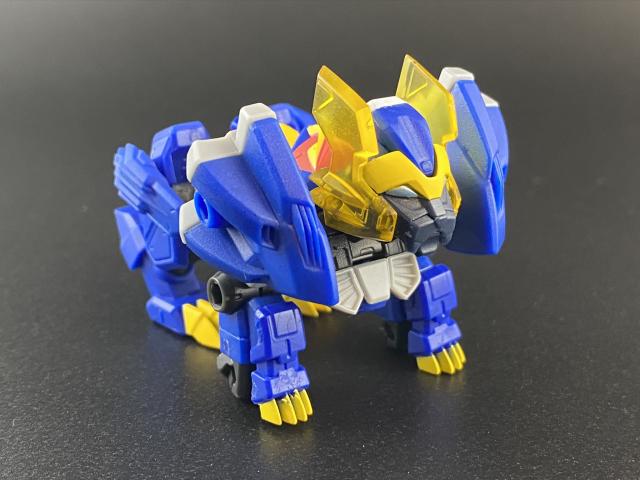 I like how a lot of the components of these figures are designed to look functional regardless of their orientation due to the modular nature of the toys. The huge shoulder blocks are faced backwards in liger mode, and the pointy fins facing forwards and the peg holes now backward evoke a booster pack helping the little beast zip along the battlefield. They look just as good facing the other way if you choose to do so. Robot Concerto is all about options. 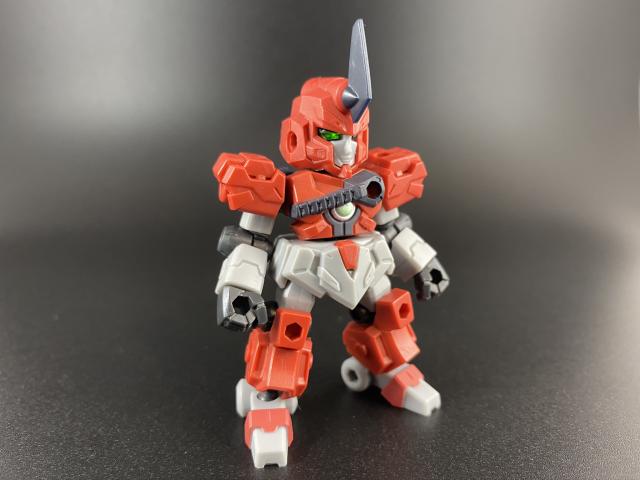 Next we have Corvender, and if that’s not a super robot name I don’t know what is. Just gotta tack on a ‘Beast’ or ‘King’ or ‘-izer’ and you’re ready for Saturday morning. 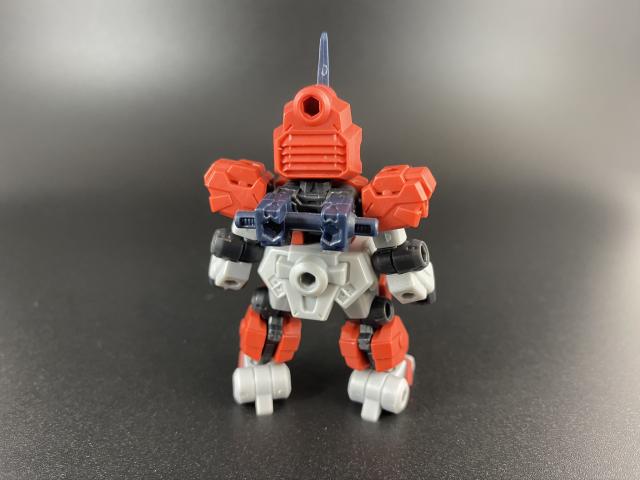 This guy has a very strong utilitarian vibe, and I’d be remiss if I didn’t mention its more than passing resemblance to EnRyu and HyouRyu from Gao Gai Gar as evidenced by the handsome silver mug this guy is sporting. There’s some great paint apps here on the chest and feet, and the green eyes look absolutely bangin when they catch the right angle of light. The asymmetrical chest design featuring a cross body strap cements the ‘working robot’ look.

Unlike Liobot, Corvender doesn’t transform. Instead the gimmick here seems to be the ability to combine seamlessly with the three support mecha. While they are obviously compatible with Liobot, they are practically tailor-made for Corvender to equip to one of its 17 3mm ports. Like Liobot, by removing parts more of these can be accessed.

The parts packs are stylized as support mecha whose constituent parts can be reconfigured in any way you can imagine using 3 mm pegs. For Volume Two, we have three. 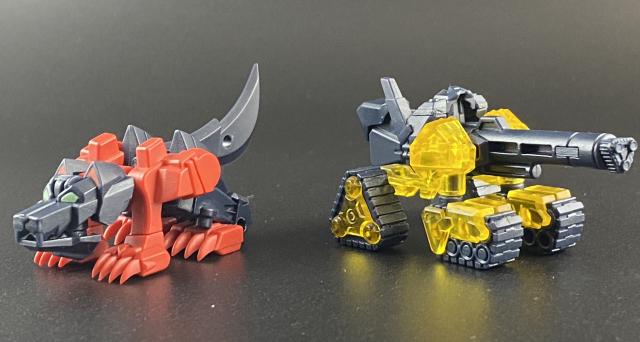 The first two are packaged together. They are a tank and lupine robot. 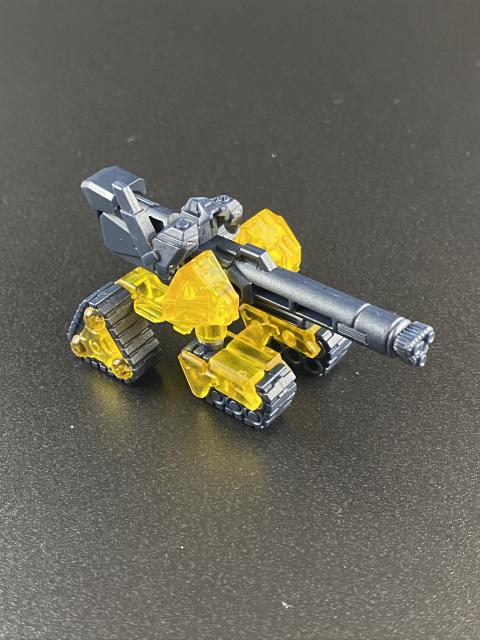 The tank is molded in black and translucent yellow plastic, matching well to either Liobot or Corvender. 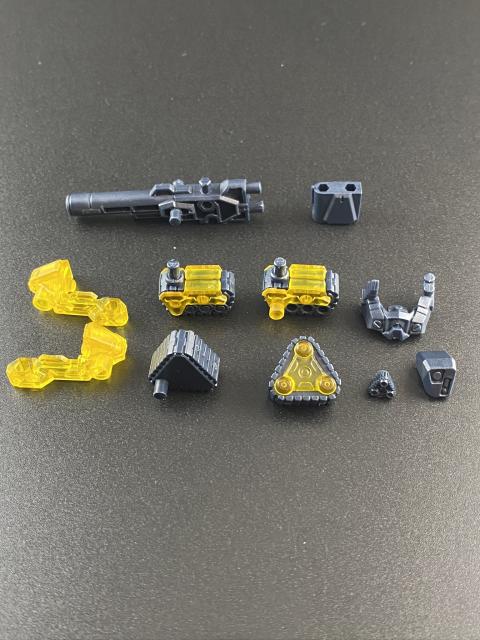 The main features here are the cannon and treads. The treads have some nice mechanical detail on the sides, and can easily be reimagined into missile bays or blaster arrays. Of the two support mecha included in this capsule, this one is my favorite. The translucent yellow really meshes well with Liobot’s color scheme and adds a pop of color to Corvender. 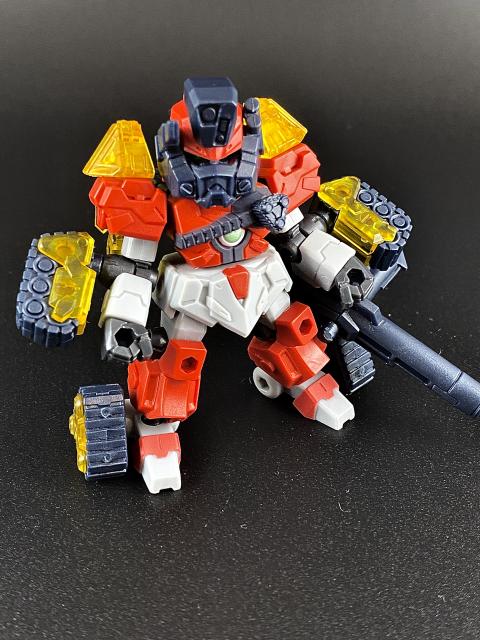 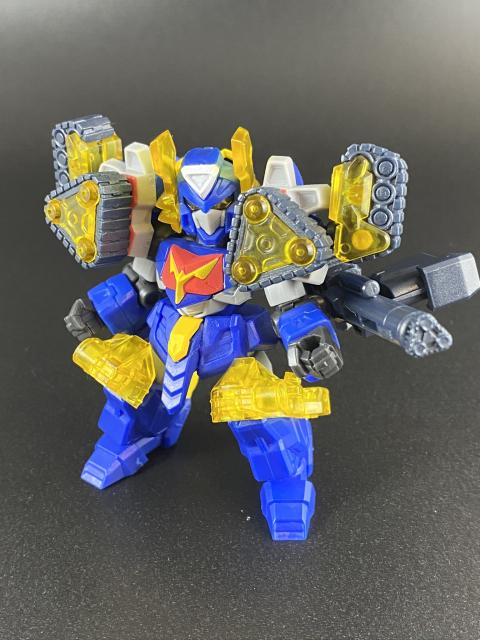 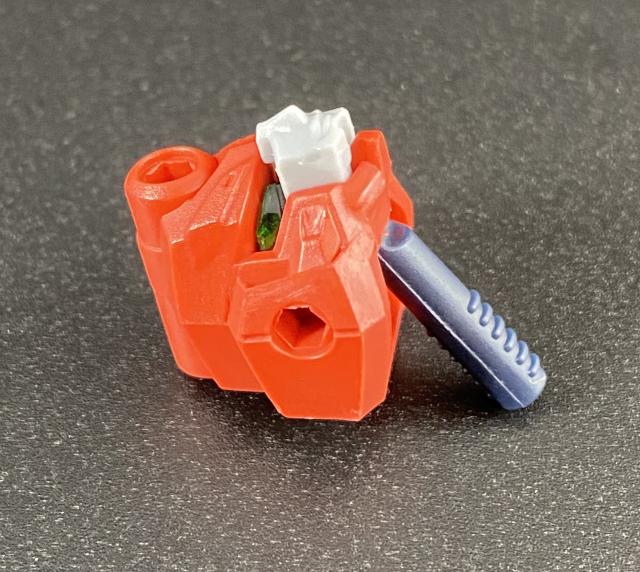 You also get a small parts removal tool to switch out Corvender’s nose and mouth with a heavy artillery themed battle mask. It looks awesome and shows off a predominant aspect of Corvender’s design. The 3 mm ports on the forehead and chest are used to show off the different ‘base’ combinations. For the tank they are a sensor array which pairs very well for the mask and little three barreled broach made from the tip of the cannon part. It’s the little touches like this that impressed me the most, making Corvender look like he’s not just wearing the armor parts, but that they’re seamlessly integrated into its body. Good stuff! 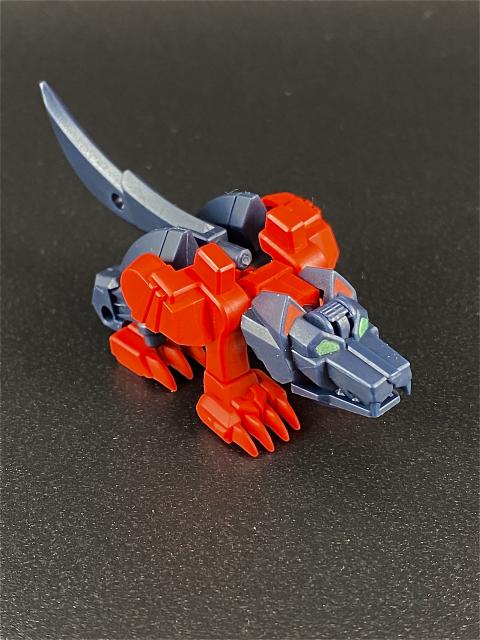 The second support mecha is a little wolf creature. If you thought Liobot’s beast form was cute, this thing is off the charts adorable in a Tasmanian Devil, tear-you-apart-in-a-berserk fury kind of way. Not much to write about in the articulation department here. 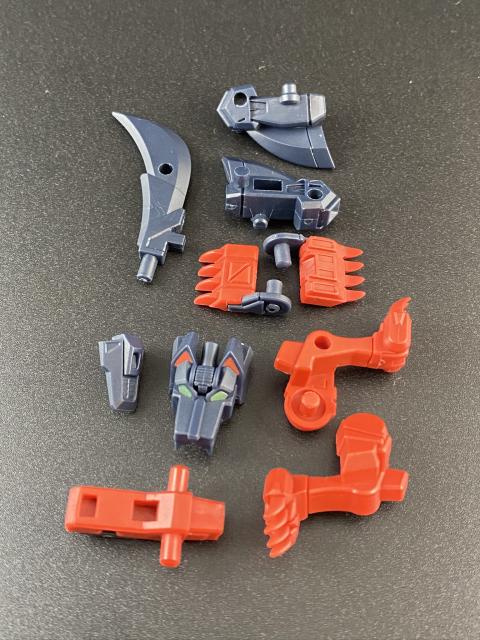 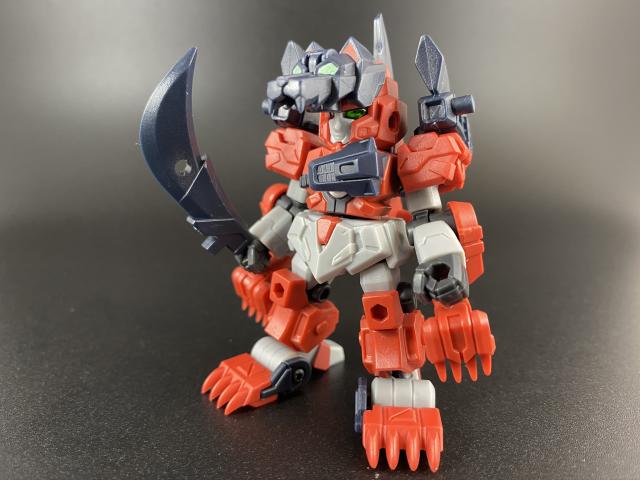 By combining with Corvender, you can get a melee-oriented form, complete with a wolverine-face hat and razor sharp claws. The tail becomes a fierce looking blade. I’m not as crazy about this form as it may be stretching the premise a little too thin (especially that crazy wolf-hat), but I am glad to have a melee option. While the red and black color scheme is a fit for Corvender, I found it hard to find a nice combination with Liobot considering the amount of claws and animal limbs involved. Unlike the tank, it doesn’t seem as versatile. 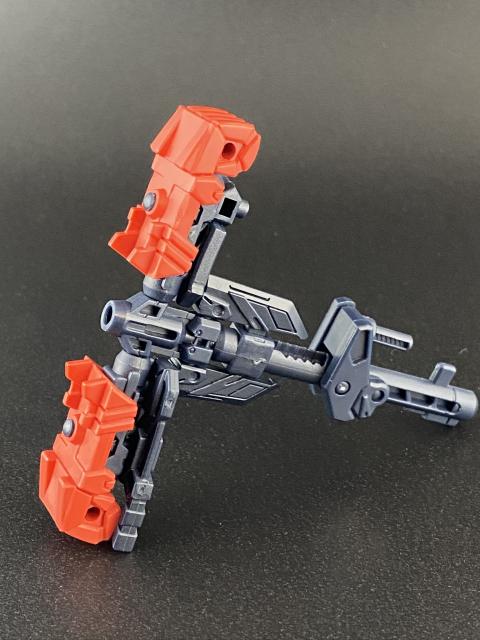 The third support mecha and final capsule is this giant hammer made of robot fists and guns. Yes, yes and more yes. This support item looks awesome and works really well with both figures. The hammer parts look great as shoulder armor, boosters, shields- but are especially rockin as a pair of giant gauntlets. 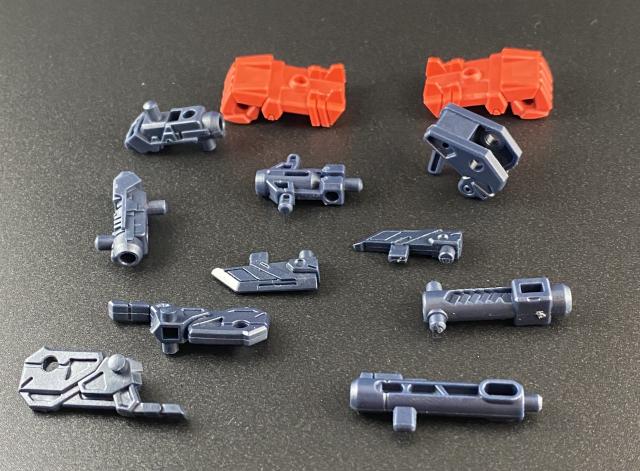 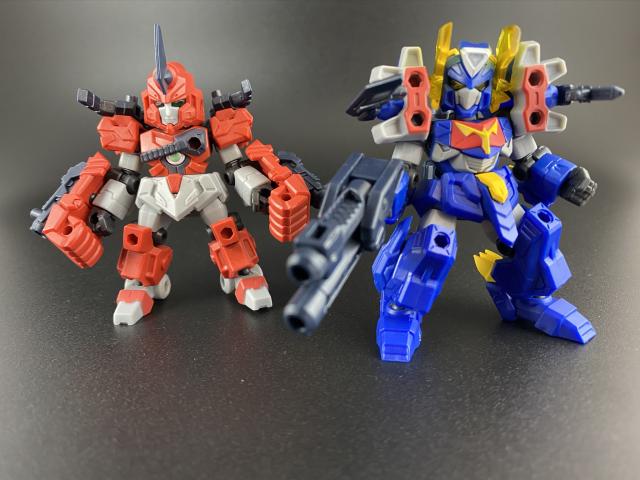 Combining all three support mecha is where things get really fun. Really, Robot Concerto is all about what you can come with during play with the parts provided. I frequently challenged myself to use each and every part while playing around with these, and with that kind of mentality you can discover new ways of combining the parts. The materials used here aren’t too hard to work with either. Combinations of softer and harder plastic are used to great effect, and everything feels really durable. 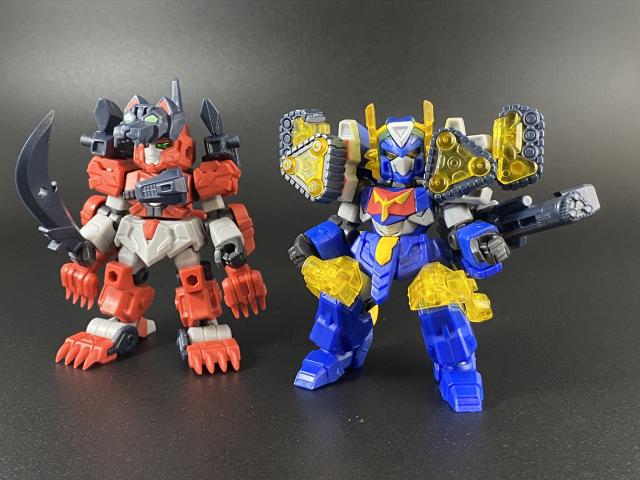 There are a lot of similarities to Mugenbine in these toys, both in design and functionality. Unlike many of Bandai’s gashapon, Robot Concerto doesn’t belong to a specific intellectual property. Instead it seems to be the product of manufacturing techniques developed for the Gundam Ensemble series of PVC and ABS based pseudo-SD figures. With that being more high-end fare, it has paved the way for Bandai to experiment with an original line of modular mecha and parts packs, also taking cues from techniques they used to pull off the watergun wielding anime girls of their extremely popular Aqua Shooters gashapon. With Robot Concerto, Bandai is taking the tricks they developed for these lines to create something very cool and cohesive, as evidenced by the feature that all three lines are compatible to a degree via parts-swapping. The line is currently poised to release its third set later this year, and with each new release more and more customization options become available. 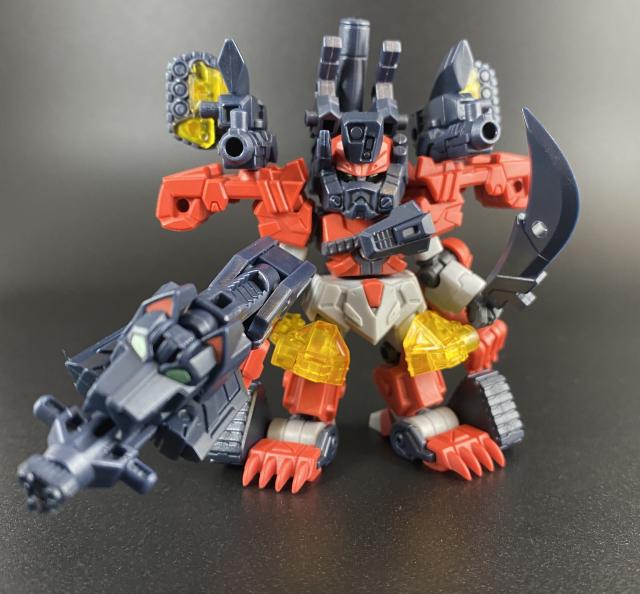 Do you ever see a toyline and feel like ‘Wow, this was made just for me.’? That’s what I experienced when I first discovered Mugenbine, and Robot Concerto is more than a successor- it’s an evolution. Volume 2 really ticked all the boxes when it comes to my personal taste, and the execution by Bandai is impeccable. These are high-end construction techniques without the burden of delivering on the requirements of being tied to a big-name IP. Instead they represent a love-letter to gashapon and the Super Robot genre. These are designs that take tried and true Super Robot aesthetics and reinvent them on a small, easily accessible scale. This is a symphony of quality, playability, accessibility and good old fashioned hot-blooded Japanese robot goodness. This is Robot Concerto Vol. 2. 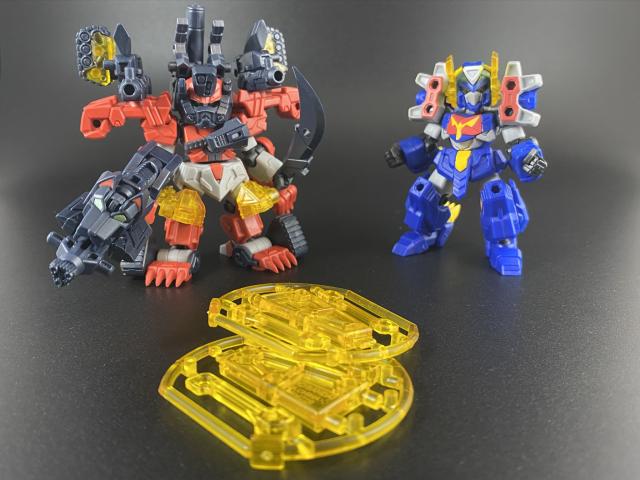