As part of the commemoration of Go Nagai's 50 years as a manga and anime artist, his most popular creation, Mazinger Z, returned to the limelight in 2018 with a brand new feature length animated extravaganza called Mazinger Z: Infinity.

Luckily, the movie was translated and released to theaters in the US earlier this year and you can read JoshB's review HERE.

As this is a modern movie, it was deemed that the old version of the character would be updated with a newer, more muscular design. And whether or not you like that design will go a long way toward determining if you like this jumbo sized vinyl version of it. This toy comes to us courtesy of Shima-X Corporation, the official overseas wholesaler.

As I usually like to do, I'll take a look at the packaging before getting to the actual toy. As with any big toy, it's got a big box, measuring 26.5" x 15" x 7". Printed on sturdy cardboard with a flap on the top, the toy rests inside in a foam bag and wrapped in bubble wrap. Although I could hear it moving inside before I opened it, there are also cardboard inserts inside to help stabilize the the toy and keep it safe.

As for the box art, I must admit that I find it a bit underwhelming. The front of the box just shows a photo of the toy, while the back has some more images that show the size of the toy as well as points of articulation. There's nothing wrong with it but I suspect it's unlikely that anyone would choose to display the box on it's own, especially if you're like me and space is limited. 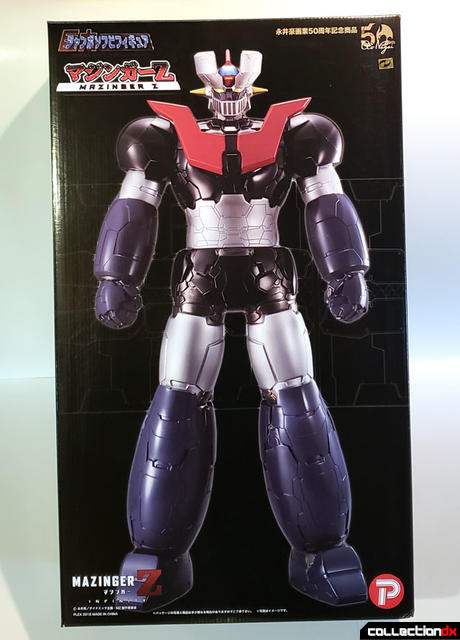 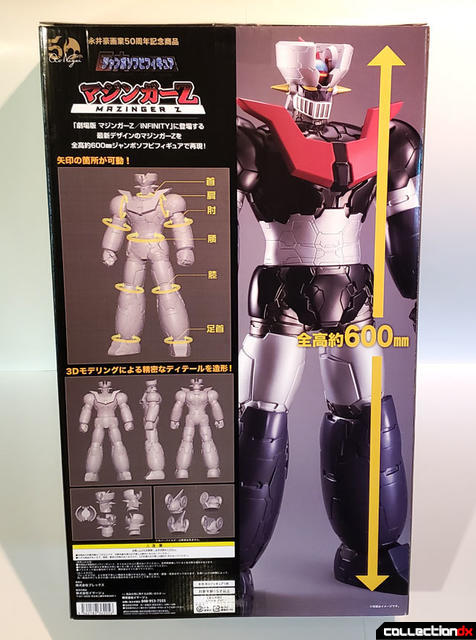 The sides of the box show a head shot and just the words "Jumbo Soft Vinyl Figure Mazinger Z".

The toy itself is a full 60cm tall and is made entirely out of soft vinyl, even though it does have a plastic-y look to it. Although the vinyl is soft in some places, it is very thick and sturdy overall and the toy is quite hefty. 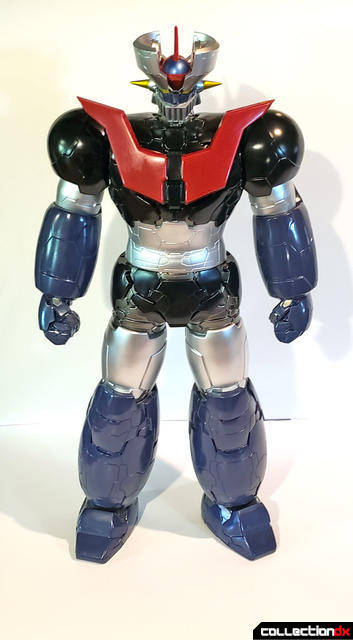 The sculpt has a great deal of detail to it and I for one am very happy with the new design. I'm glad that they did not go too far overboard in making the robot look big and dynamic. The character has a much more muscular look to it than it ever did before, but for me it really works. The proportions are solid and nothing looks too over the top. I'm not a big fan of Mazinkaiser and some of the newer Getters with their giant shoulders, forearms and calves so I'm pleased that some restraint was shown in that regard.

The paint apps on the toy are spot on and more intricate than it looks at first blush. A gray base coat under the armor gives the character and the toy a subtle depth that you might not notice at a glance. I really like how the chest plates look. They are molded so beautifully that I have a hard time telling if they are a separately molded piece or not. 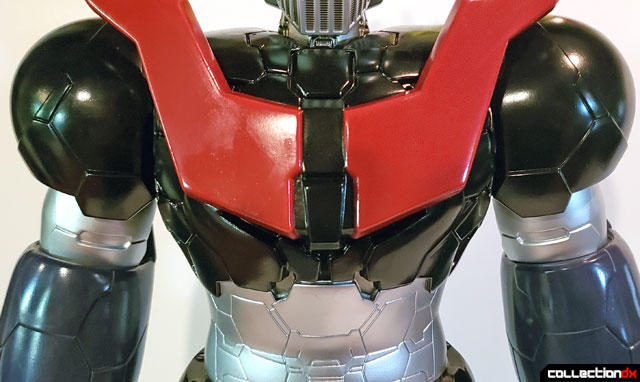 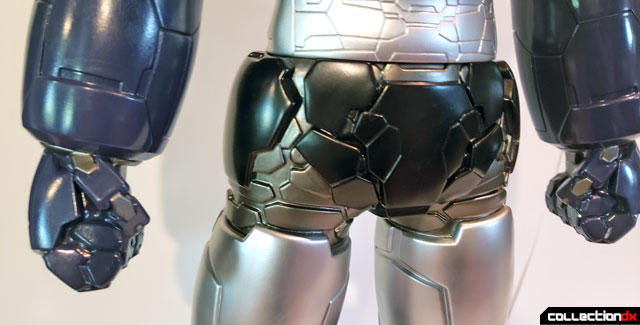 Each hand even has individually painted fingers. 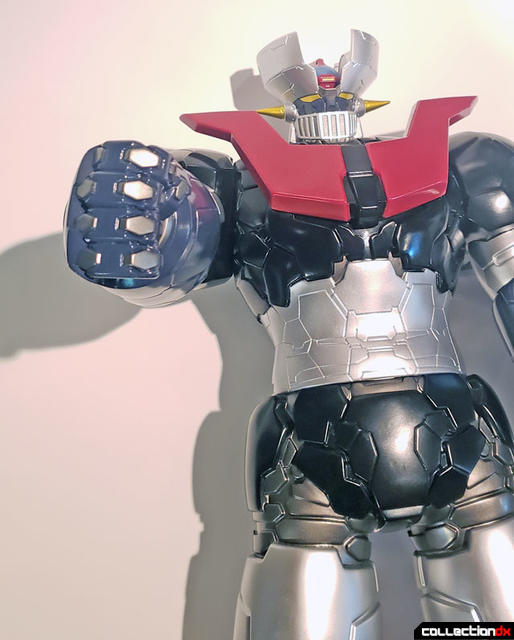 The sculpt of the head and the paint on it are both very impressive. Unfortunately, you can't really turn the head too far though or else his chin will bump into the top of it's chest. 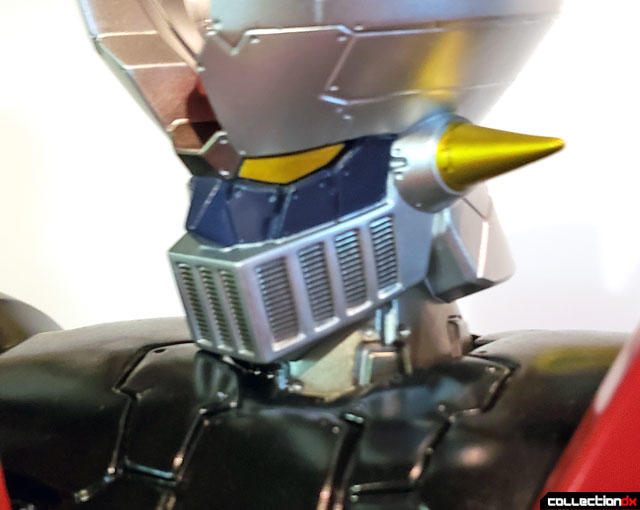 Although a separately molded piece, it does not appear that the Hover Pilder is removable. For me, this is the biggest missed opportunity with the toy. A removable Pilder is not only fun to dock into the head of Mazinger Z, but it essentially becomes a second toy. That said, for a toy of this type, it's main draw will be it's shelf presence and most collectors will likely not be spending too much time playing with it like a child would. And make no mistake, with a price tag north of 40,000 yen, this is an adult collectible and not a child's plaything. Which isn't to say that you can't have at least a little fun with it! 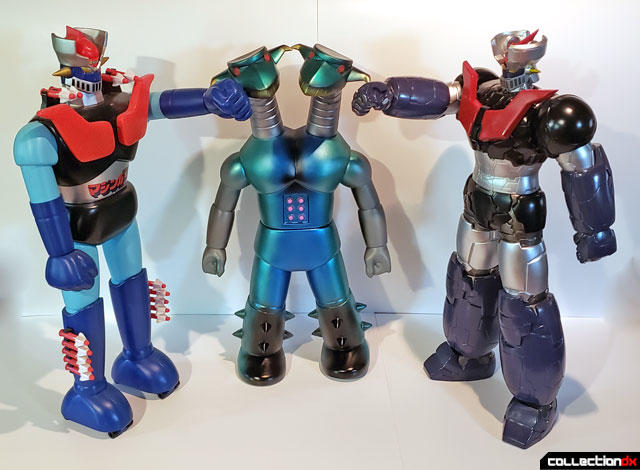 Wholesale purchase inquiries can be directed to:

shimaxatokabu@gmail.com for other countries' buyer