Before Topspin and Twintwist were being called the best deluxe Transformers in a while, there was Triggerhappy; a deceptively (get it?) intricate update to a very obscure character that helped to show just how good the deluxe size class could be after Combiner Wars left some a little tired in terms of design conventions.

Starting in robot mode, there are really no complaints I could ever make about it. It's just very, very good in a way few are. First of all, the color scheme is in my opinion, really attractive. The blue is just dark enough to look really striking with all of Triggerhappy's gold highlights. The gray plastic color choice does look kind of cheap, but it at least complements the rest well enough. My favorite aspect of the color scheme has to do when his Titan master (which yes, has an unpainted robot mode) in head mode. This detail specifically are the eyes, because I think they stand out really well. Maybe it's because of the blue color that surrounds them highlighting the eyes in such a cool way but regardless, I really like it. 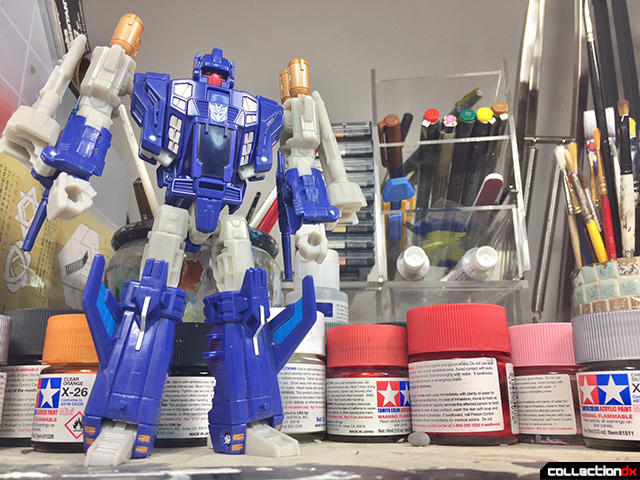 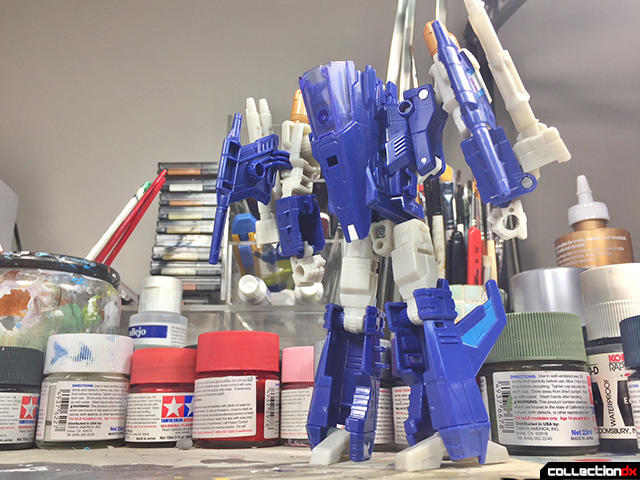 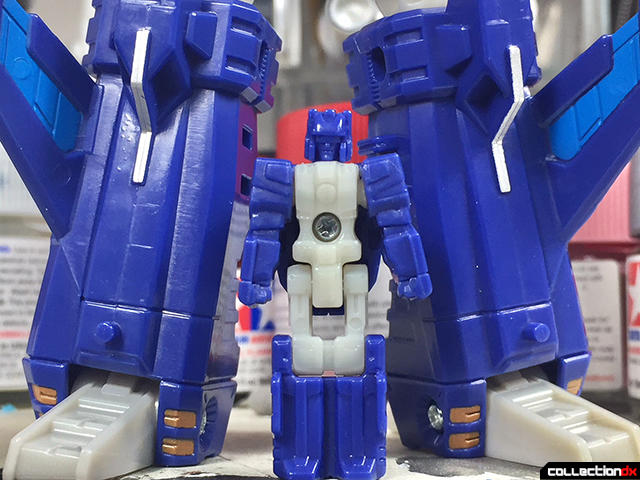 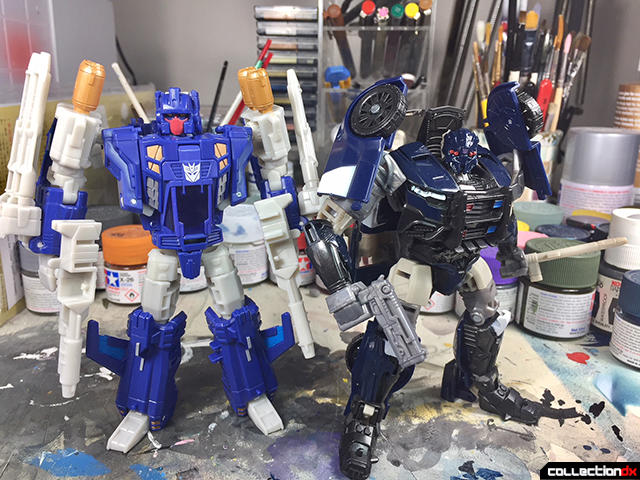 Also in this mode Triggerhappy's hands can be transformed as if they were going into jet mode, making them into really long gun hands. It's not in the instructions, but it is a cool feature to use. In addition to that, Triggerhappy includes two guns that can, of course plug together, and the results are just as mixed as usual. That being said, I like the design of the guns individually, and they can be attached to his arm cannons to make them look even more ridiculously overkill. 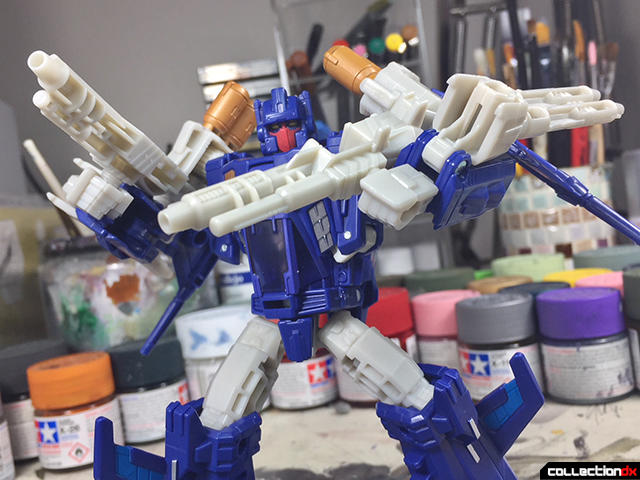 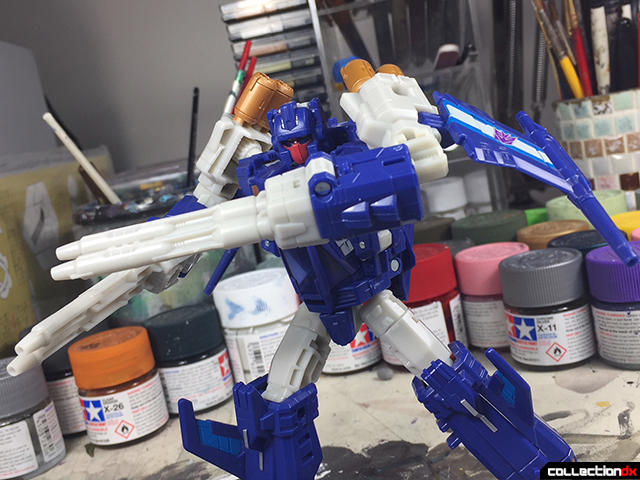 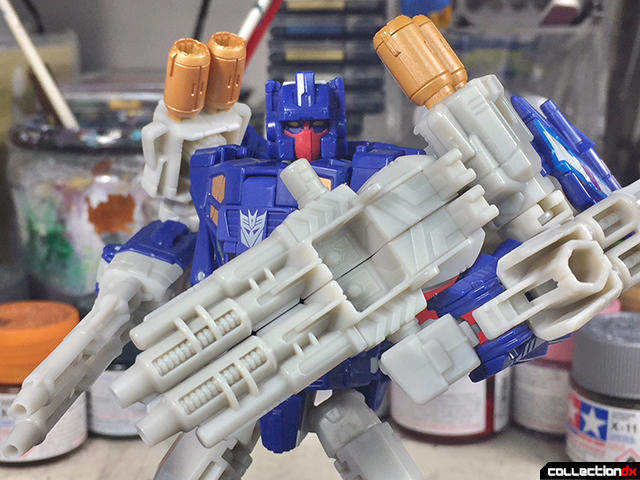 Triggerhappy's transformation is both mine and many other people's favorite part. The legs are simple but effective, as they basically just bend at the knees, and the arms are simply done by replacing his hands with the cannons, and folding out the wings. The real fun comes from his body, as the waist disconnects from it, only for it to revolve all the way around to plug back in at the top of his body. Meanwhile, the shoulders and sides of the body extend outward and double hinge back, completing the jet mode. What a simply satisfying transformation, I love it!

In jet mode, Triggerhappy looks perfect. The construction is very solid, there is little to no visible robot parts, and the vehicle itself has a very cohesive, well thought out design that makes it look more like a vehicle from Star Wars instead of Transformers. What definitely helps are the paint apps, as no spots of the alt mode look underrepresented as far as deco is concerned. I especially like the stripes on the wings, because I think it gives the mode a little more personality than it otherwise would have. 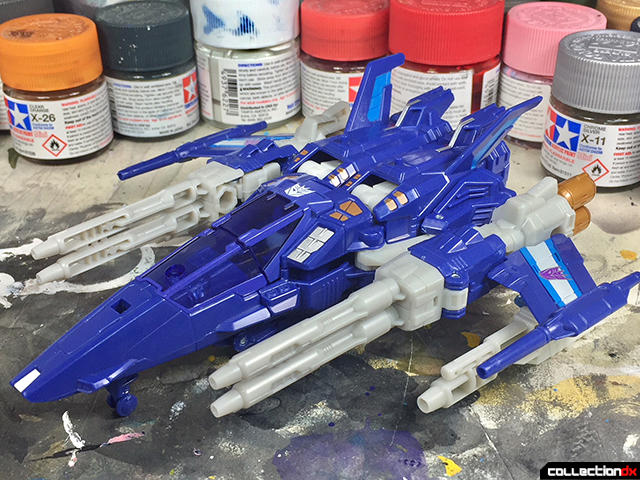 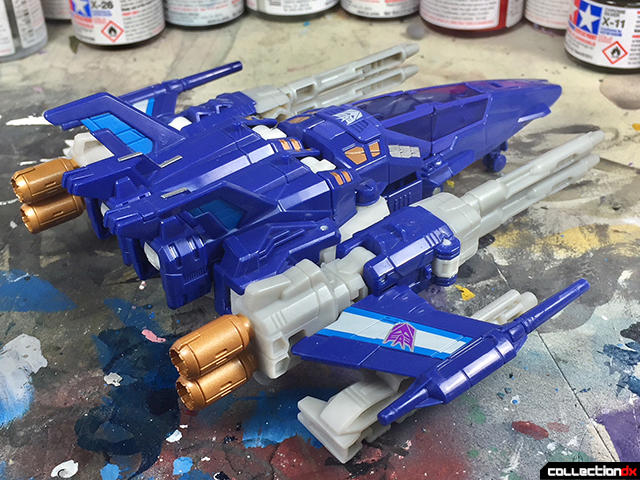 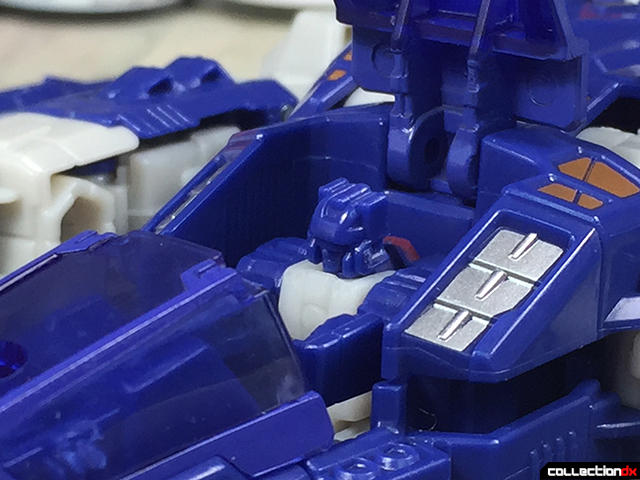 Overall, Transformers Titans Return Deluxe Class Triggerhappy is just great. The Transformation, character design, and yes, even the paint are done impeccably well. While his guns are just fine, I'm not going to count that against the figure too heavily considering everything else is so good. God enough, that it makes Triggerhappy not just a very good decepticon to fill out your ranks with, but one of my favorite Transformers figures in recent memory. (Although I still think Topspin is better!) Do yourself a favor, and get him as soon as possible!

4 comments posted
Works More Than Once

Thus far, I only have the Metalhawk version of this mold. But everything you mentioned applies to him as well. Pretty cool figure.

That’s so cool that you have metalhawk! Both of those Titans Return box sets go for some crazy prices so I don’t have them yet but I want to so bad! also I’m glad you can experience this mold, because it really is pretty great

Yeah, I had to hunt to get the Velocitron boxset from a local TRU. Took forever for them to get to Georgia. After that hassle, I didn't hesitate to pre-order the Cybertron set from BBTS.

Triggerhappy really is a great figure.  I was lucky enough to find him in a shop here, Home Bargains, for £8. :D  I really love his transformation, but what I really love about these rcent Transformers is that they are very faithful recreations of the G1 toy and cartoon chaarcters.