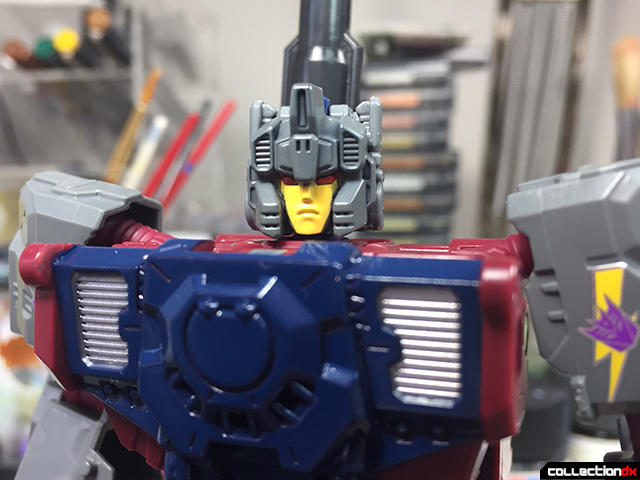 The last Deluxe I have yet to review from Wave four of Transformers Titans Return; “Quake” has served as a pretty pleasant surprise to me, as although I was well aware I would like the figure considering it’s mold, I didn’t think I would like it quite as much as I actually do.

In robot mode, Quake looks absolutely nothing like Hardhead, which is pretty remarkable to me. The fact that a repaint can do so much to make itself look like something completely different from what it initially was is polarizing to me, and Quake is one of the best examples of this I’ve ever seen. I think Hardhead already had a great robot mode, (you can read my review of him for more on that!) but Quake’s new color scheme and head sculpt, in my mind, really improve upon what was already a great looking figure. I especially love how the head sculpt and colors (even the Decepticon lightning bolts) make him look like a grunt suit from some real robot anime, and the fact that basically any Titan Master looks good on Quake’s body definitely helps. Speaking of Titan Masters, Quake’s (named “Casm”) goes against the visual complexity of his larger body by looking really boring and uninspired. That being said, I can’t expect too much from a Titan Master, so his blue body and gray everything else really isn’t a big deal considering his small size and the pretty minute importance of giving Casm much detail anyway. 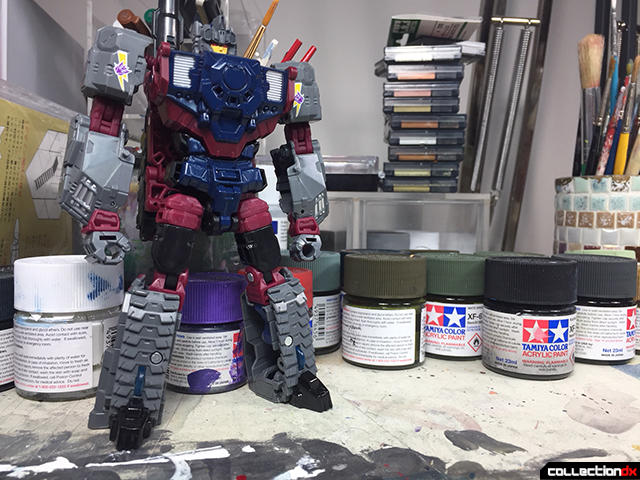 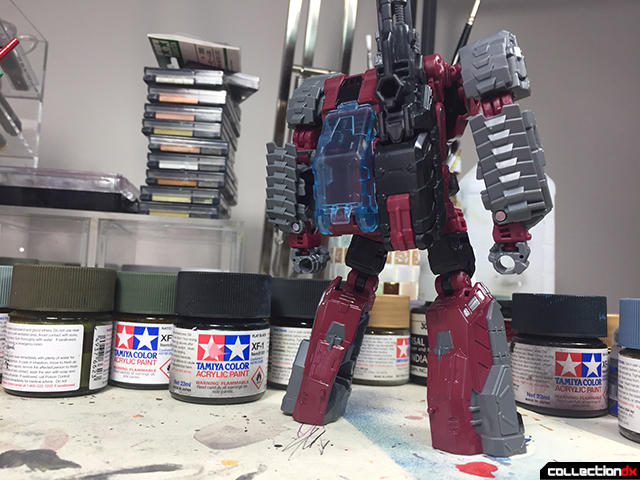 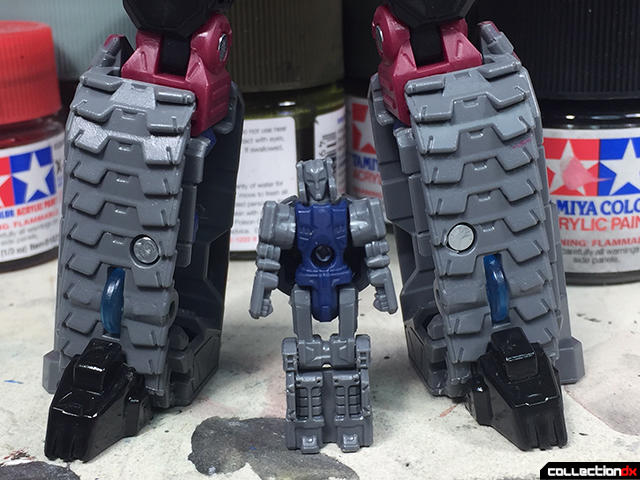 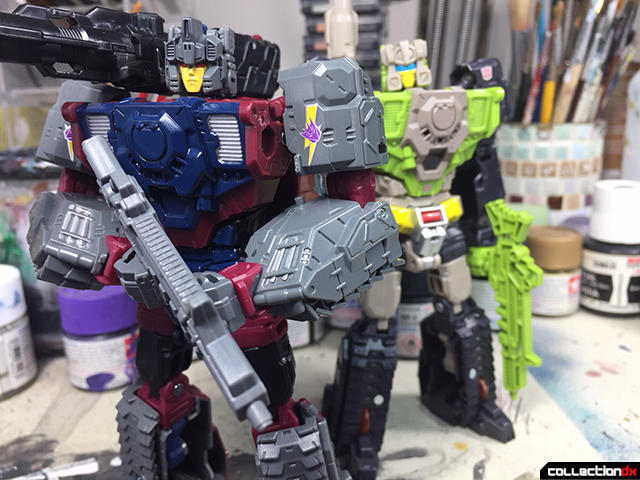 Quake’s accessories are of course, the same as Hardhead’s but again, I like them a little better here. First is his very standard issue looking stock machine gun, the perfect weapon for someone as militaristically generic as Quake. Second, is his shoulder cannon. It can attach to a joint mount at his shoulder or Quake can switch weapons, meaning that he could just hold the cannon in his hand while the machine gun stays on the mount. Just like with Hardhead, I really like the versatility. 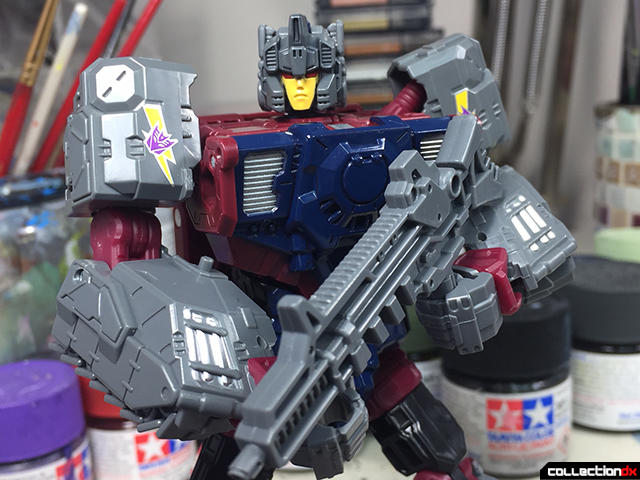 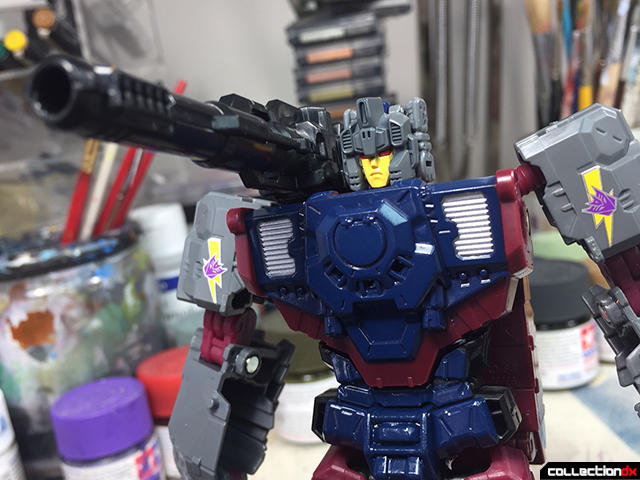 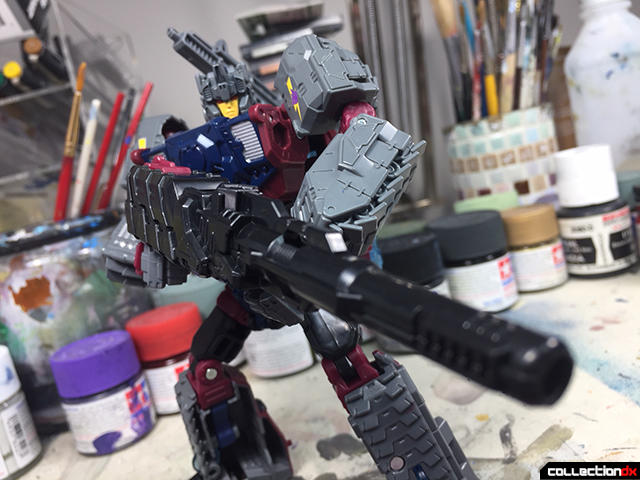 Transformation is the same as Hardhead’s of course, so I’m not going to go step by step, but I will say that it is still as effective and concise as his mold brother.

The result, is a tank mode that looks as utilitarian as one could expect. I really think the new colors suit the mold well, as the light blue cockpit and copious amounts of colored detail help the tank mode in looking generic without looking boring. It just looks like it’s made to look intimidating and to kill efficiently, which is what to expect for any evil war machine. The only thing missing is a list of crossed out Autobot symbols to indicate kills, but that might give Quake a little too much individuality. 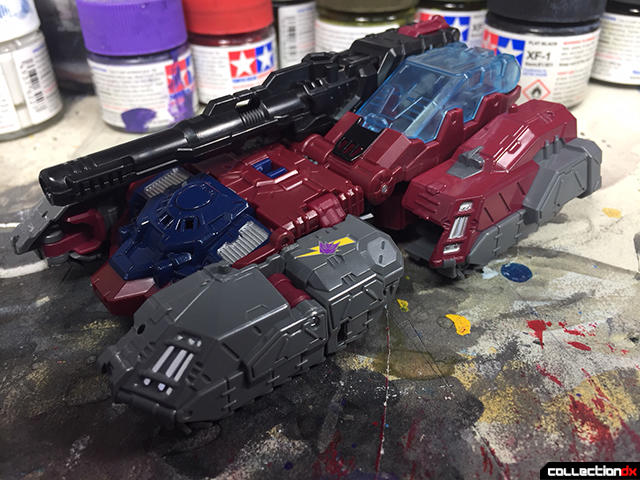 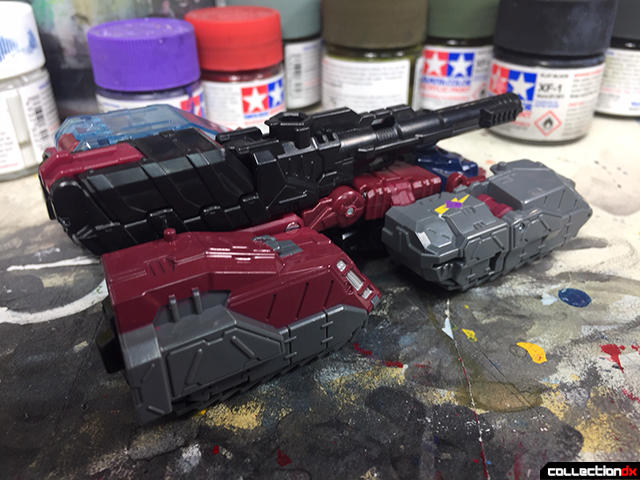 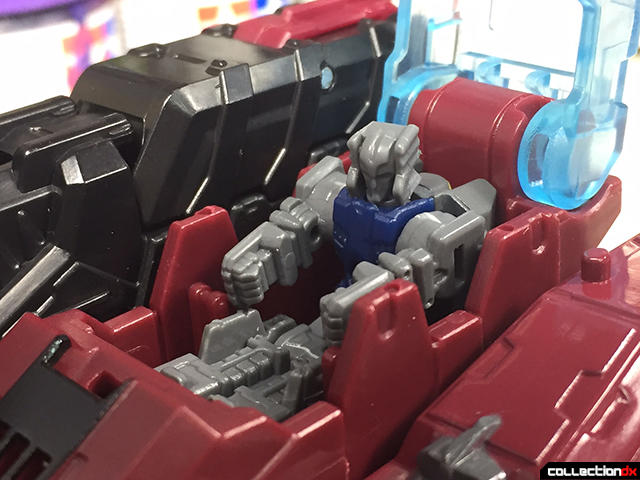 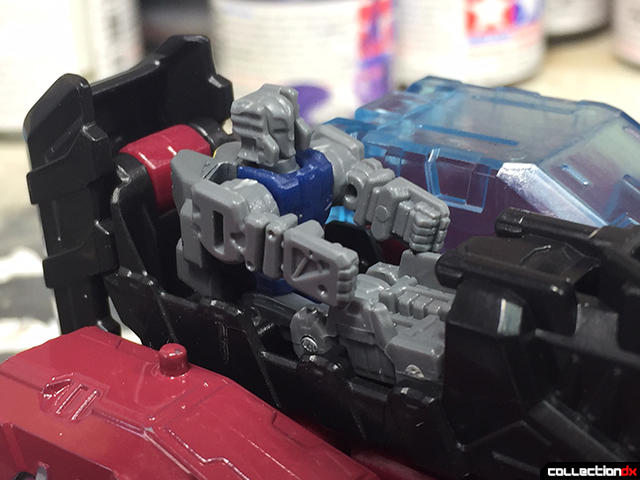 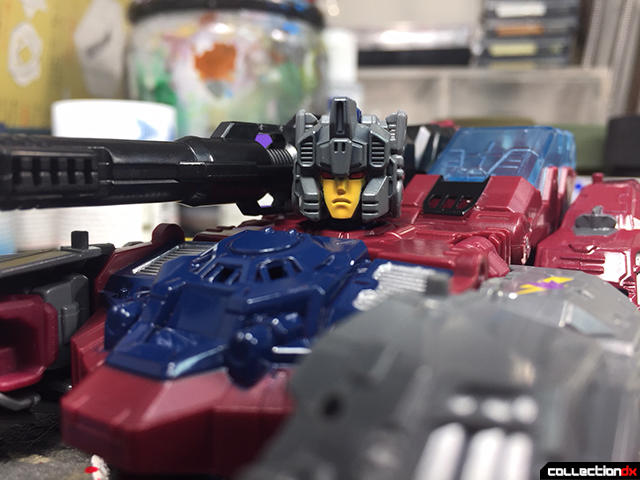 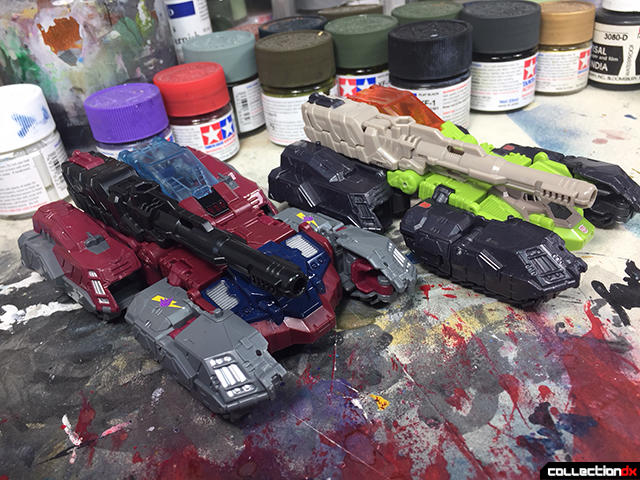 Putting everything into consideration, Transformers Generations Titans Return Quake is probably one of my favorite Deluxe class figures ever, and definitely my favorite of 2017. From it’s versatile accessories, good articulation, unparalleled aesthetics, and overall efficient, precise Transformation Titans Return Quake is a Deluxe figure I don’t think you want, because more accurately, you need it. He’s a Decepticon for Zeon fans, and for that I couldn’t be happier.

So this figure is just Hardhead with a new head, but do you people think it’s any better than that figure like I do?

Also this is unrelated but I just saw the 2018 Tomb Raider yesterday, and I actually liked it a lot! If anyone saw it yet, what are your thoughts?

Chasm is vastly improved by some Bad Moon Yellow painted on his tiny face, and a couple red dots for the eyes.

I thought Tomb Raider was terrible on so many levels. Sorry.

But I ended up buying this guy after this review, so that's something.

Oh no how dare you disrespect the new tomb raider :)
That’s fine, it’s definitely not a very good movie, so I understand!

I’m really glad you got Quake because of my review! He’s a pretty amazing Deluxe

Not bad. It would have been nice if he'd been more of a retool or even an all-new figure to better resemble the original. But considering the route he went, he turned out pretty nice.