This version of Mazinger, dubbed "Mazinger Zero", comes from the Shin Mazinger Zero manga, which began in 2009. I've never read it, so this iteration of Mazinger is completely new to me. You can't ignore the giant red Jet Scrander on the back, and that alone draws my attention.

SRC is the new SOC. At over $100 USD, its basically the same in size and scope for what Soul of Chogokin was, but this is the new normal for diecast super robots. At 6.5 inches tall, and filled with metal and pointy bits, Mazinger Zero is almost everything a modern gokin should be, minus firing fists.

There's suprisingly little packed into the box. Included is the figure, one set of variant hands, arm blades, the Zero Scrander, and a stand connection piece. 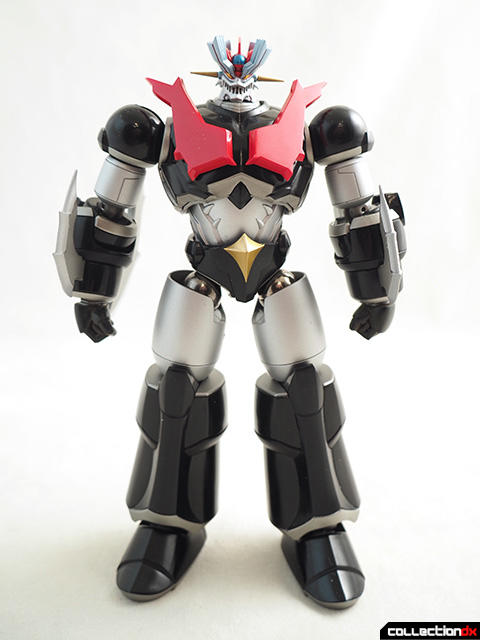 Out of the box he is ready to go, and i've left the scrander off for these initial pictures due to the difficulty it adds in posing. With the arm blades attached I find the scrander kept getting in the way. Still, when you find a good pose it looks great. 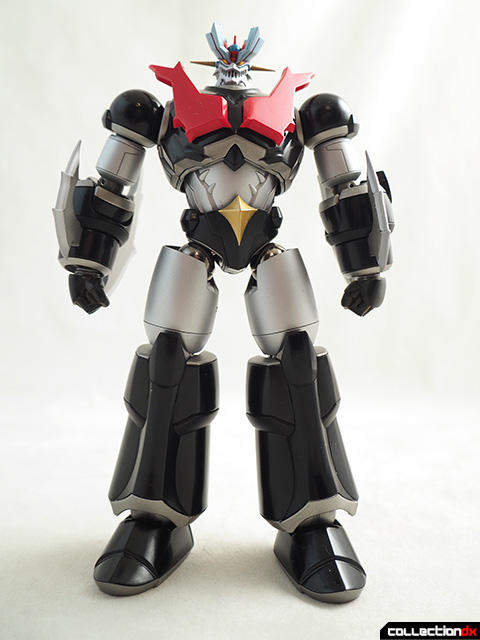 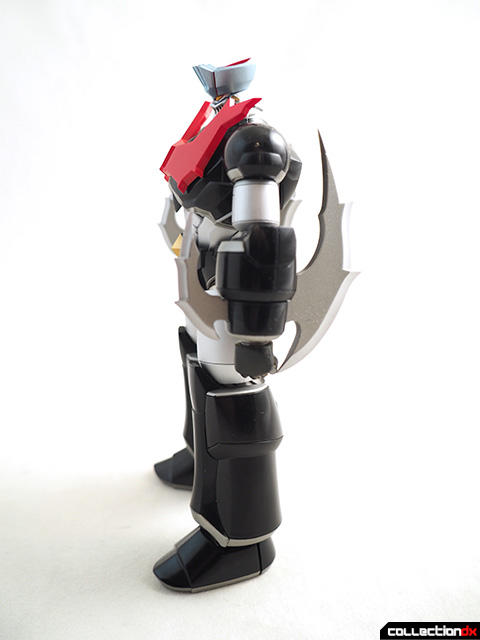 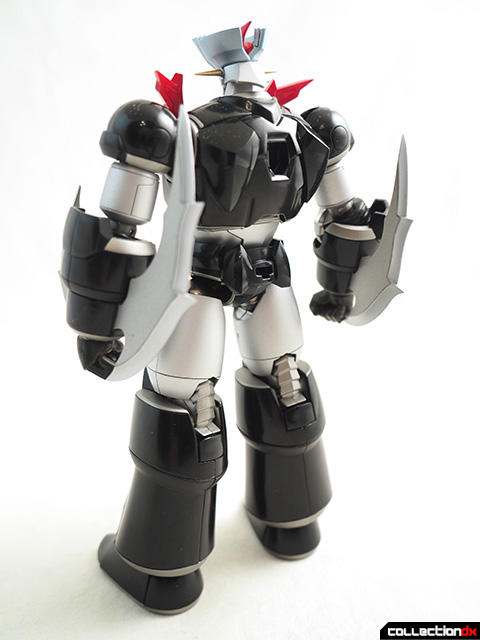 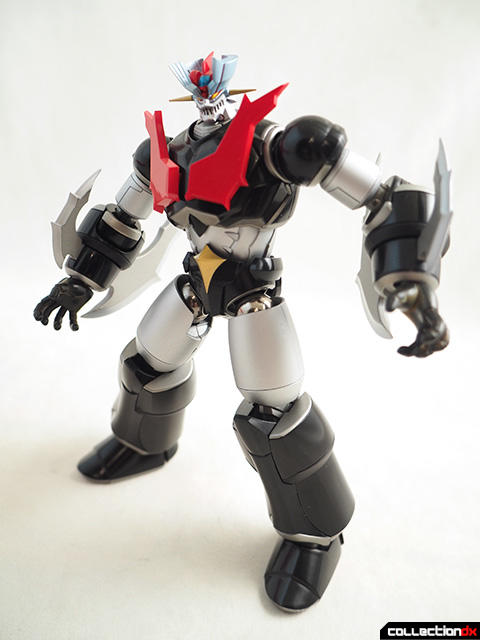 The head has a removable Jet Pilder that could stand to be a little tighter. The same goes with the gold spikes on the side of the head. if they get caught on something, the flick off very easily. The head is on a ball joint and then the entire neck is on a separate, multi-part ball joint. 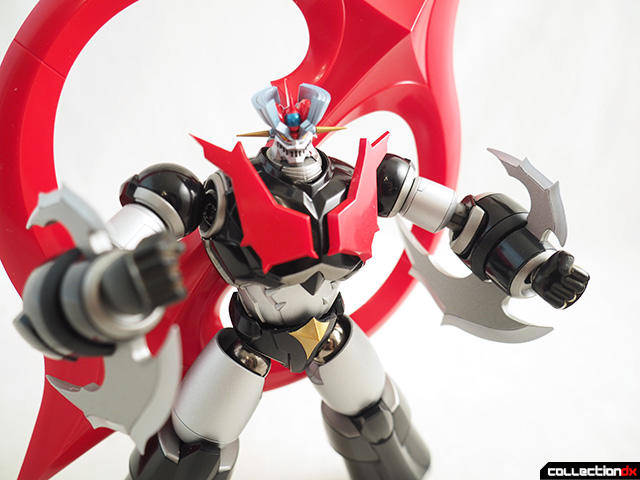 The torso has an extendable joint at the chest, with ball joints at the top or bottom. 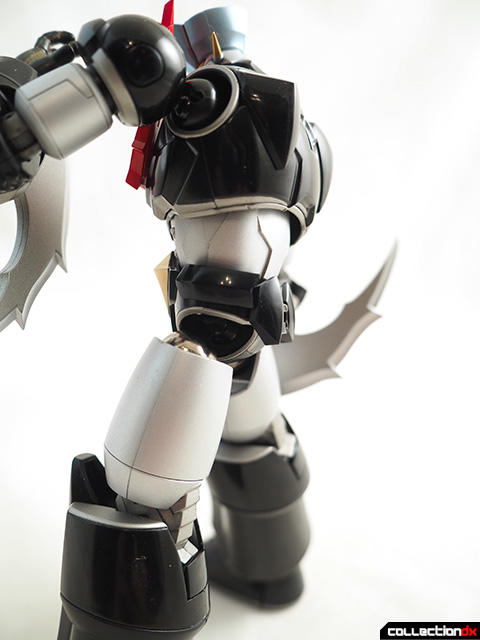 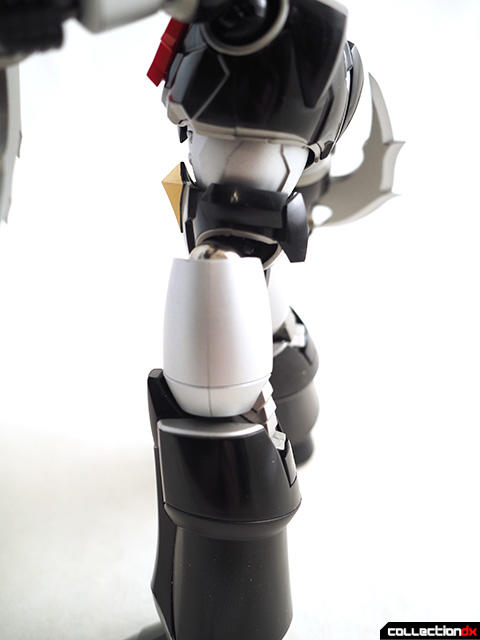 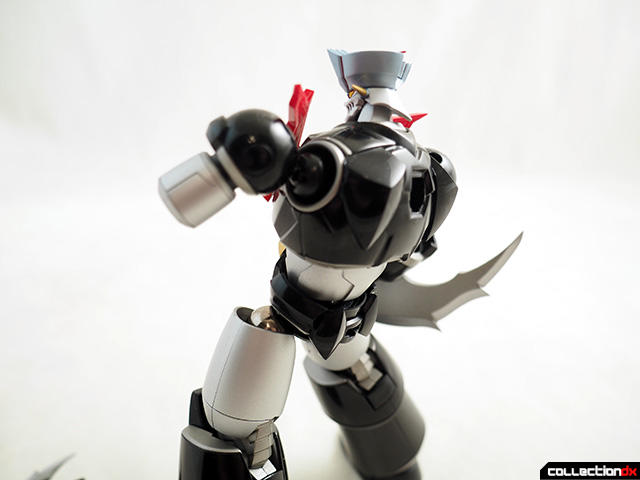 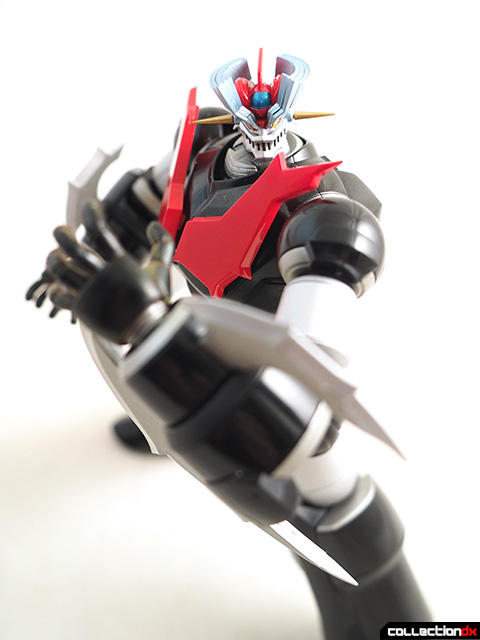 Knees are double jointed with the collapsable panel on back, and feet have extendable ankles and an articulated heel joint. 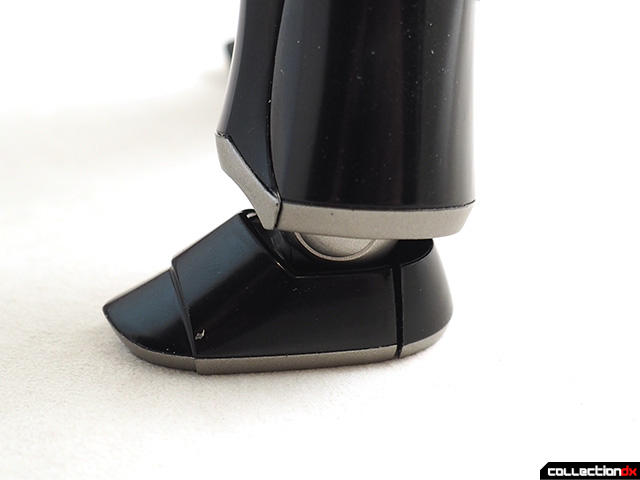 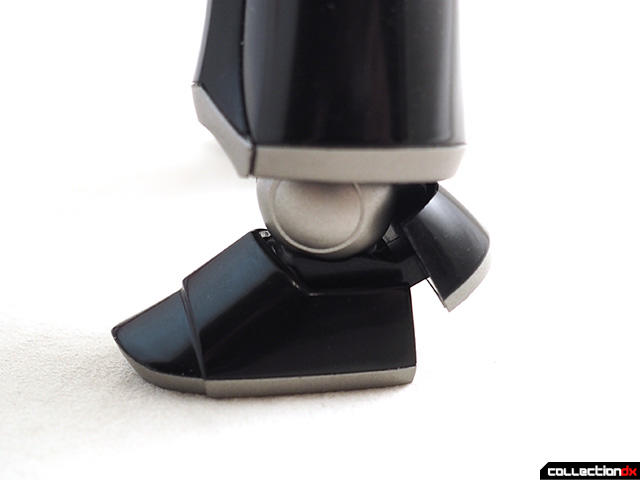 The Zero Scrander is interesting. It's a solid piece that plugs into the back of the figure, and it does not rotate. It's rather large and striking in appearance. 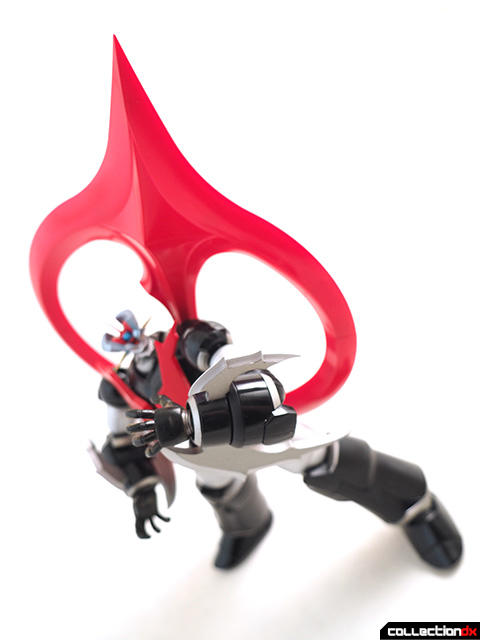 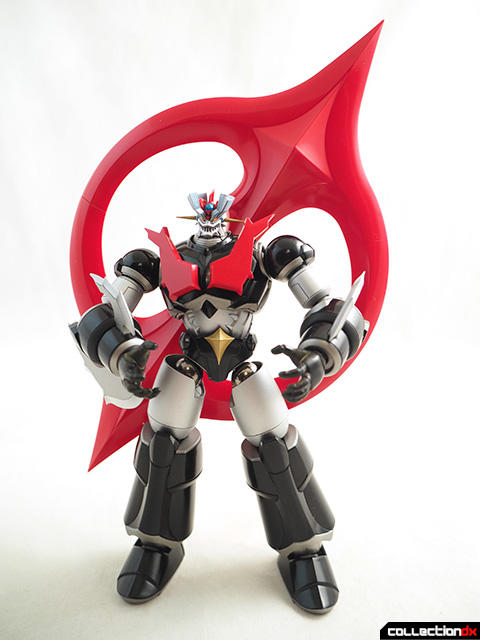 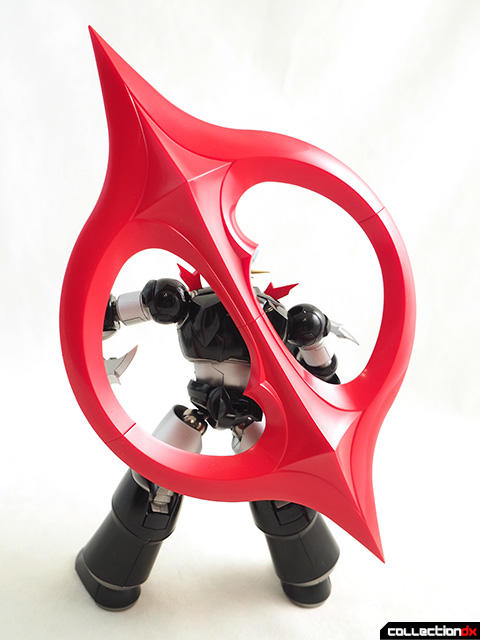 You can get poses out of the figure with the Scrander on, it's just more challenging. It adds a bit of weight and you have to be careful about placement of the arm blades. 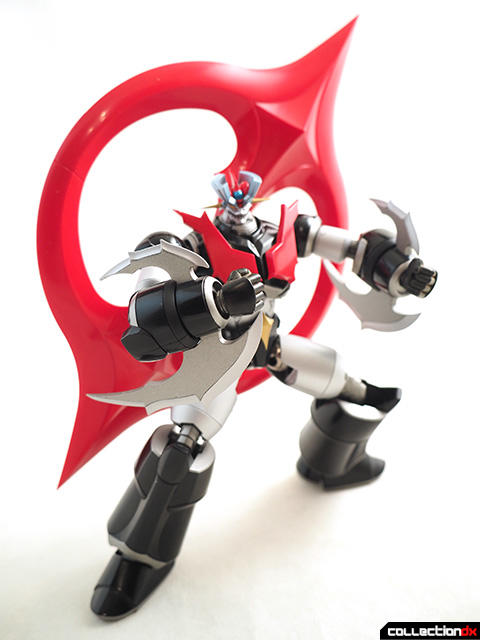 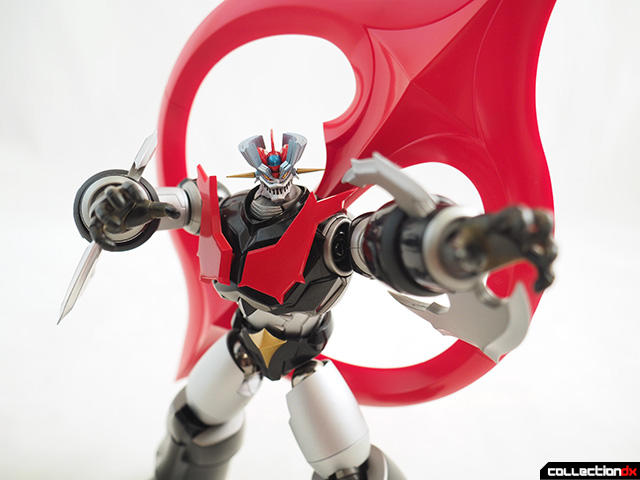 A small adapter is included for use with Tamashii stands but keep in mind the figure is heavy and should be used with the heavy duty robot stands. 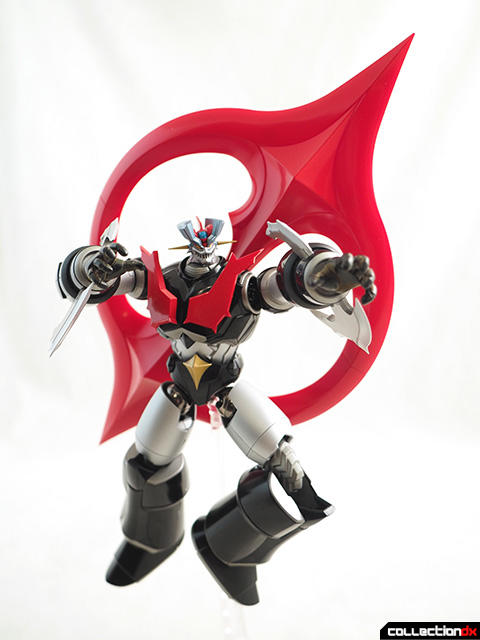 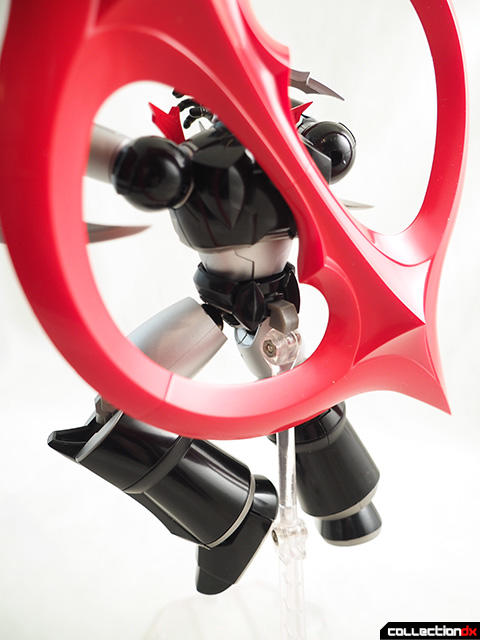 The Scrander can also be removed and mounted on a stand all by itself. 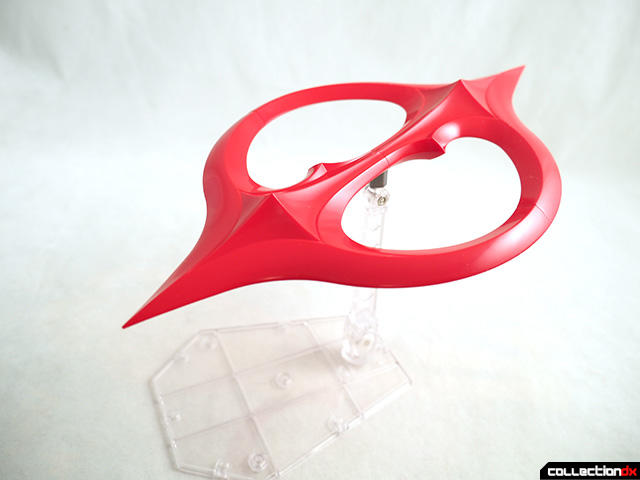 It's a hefty figure, and very sharp. If you are not careful you are going to draw blood on one of the points. It's a refreshing change from the re-hashed versions of the original Mazinger that we see on the market so often.

You can get your Super Robot Chogokin Mazinger Zero from HobbyLink Japan!