When I first heard about a brand-new Voltron series, all I really wanted out of it was new toys that I could purchase one at a time and not have to break the bank trying to afford five lions all at once. A year later, my wish has been granted (not to mention, the new series is pretty remarkable and exceeded my expectations greatly). However, trying to purchase one at a time was a mistake, since all the lions sold out everywhere immediately. Regardless, this is a fun toy. 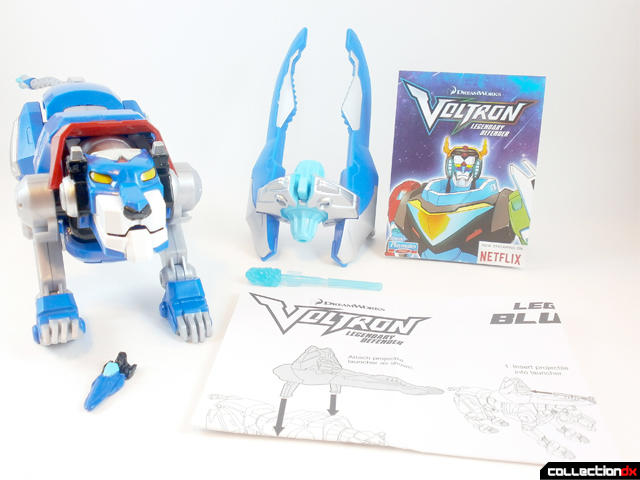 Along with the lion itself, you get a projectile launcher, projectile, speeder, instruction manual, and small catalog detailing the rest of the toyline. 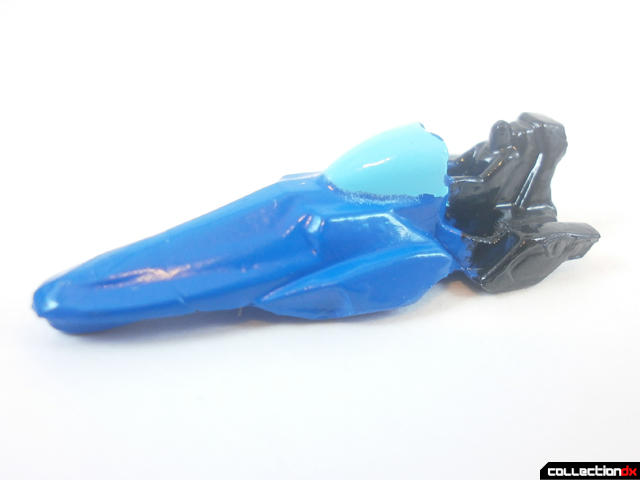 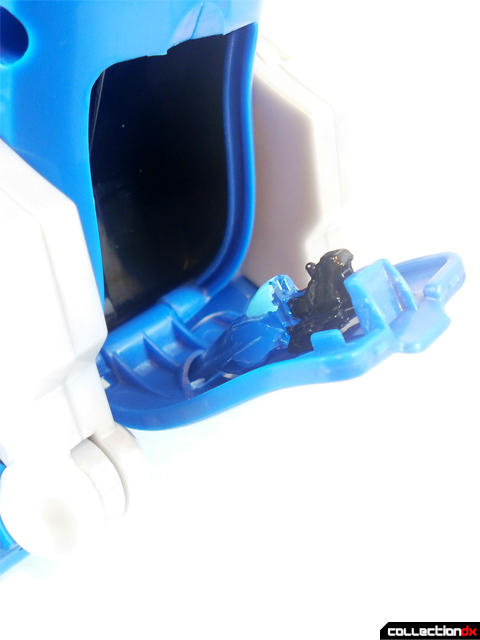 Let’s start with the speeder. Apparently that’s supposed to be Lance riding it, but considering the entire speeder is an inch long, I can’t blame them for not trying to paint him. The speeder can be stored in a cavity below the lion. 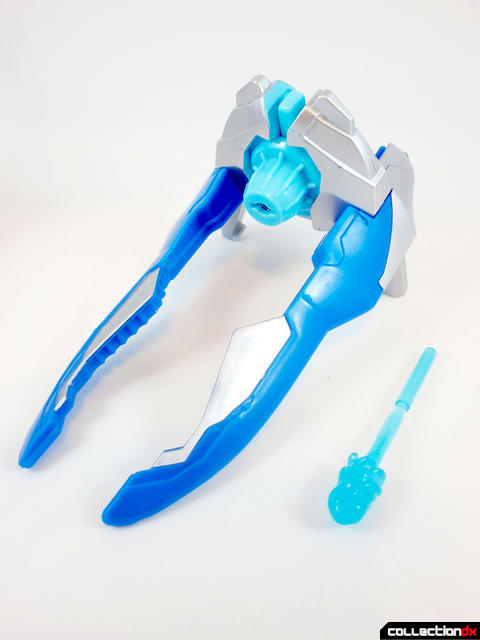 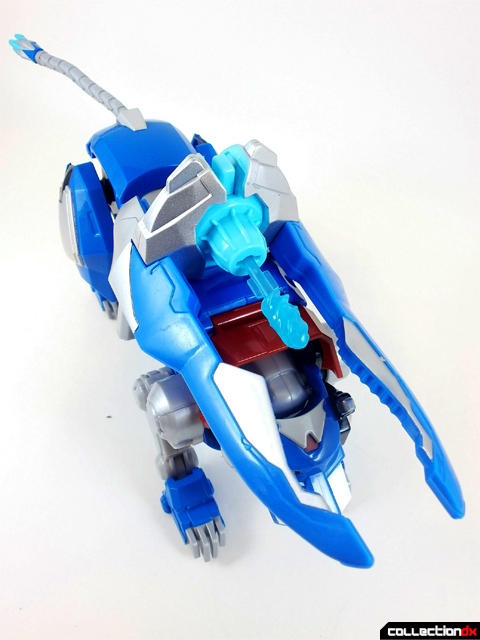 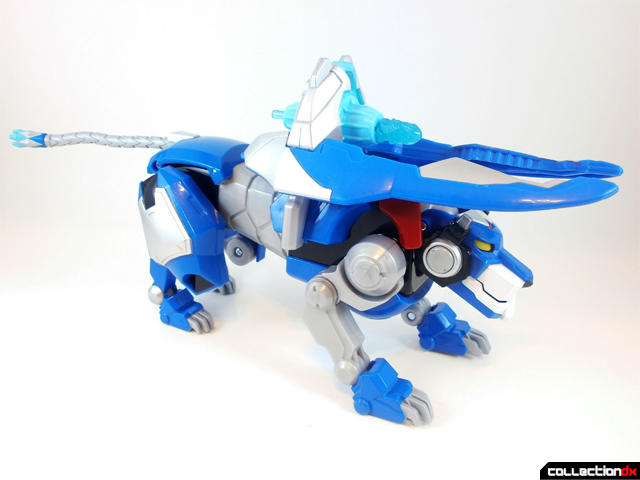 Next up is the projectile launcher. By pushing the big button in the center you can launch the missile a good few feet. Remember, kids, no shooting anyone, not even your siblings, even if they really deserve it. 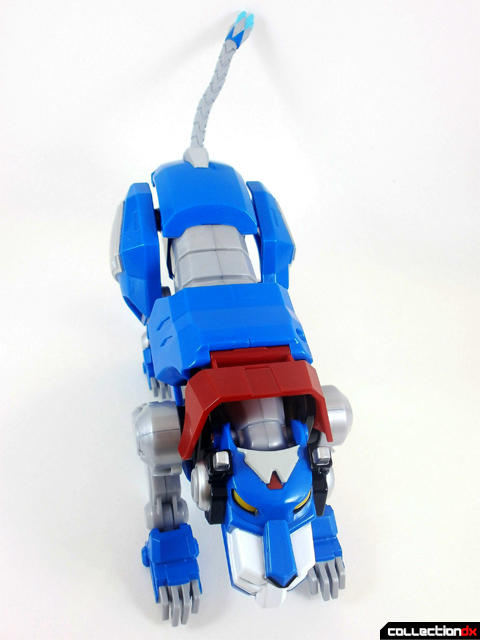 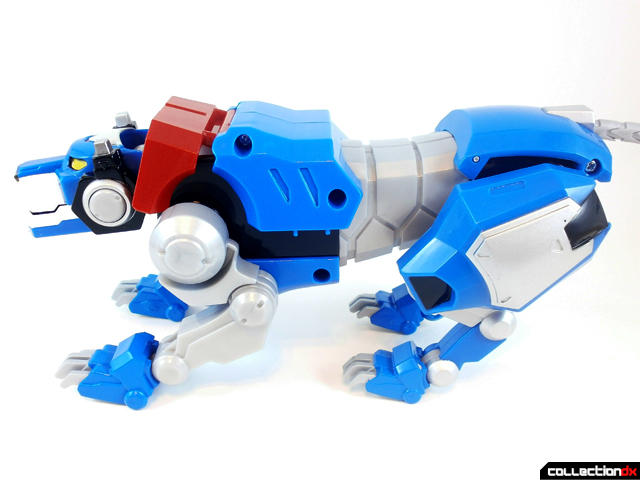 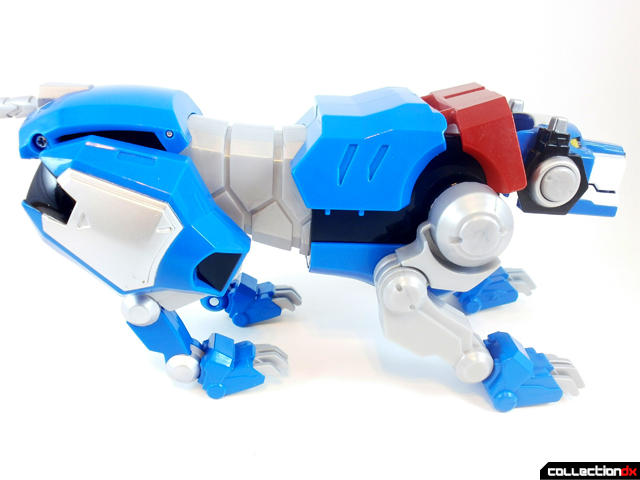 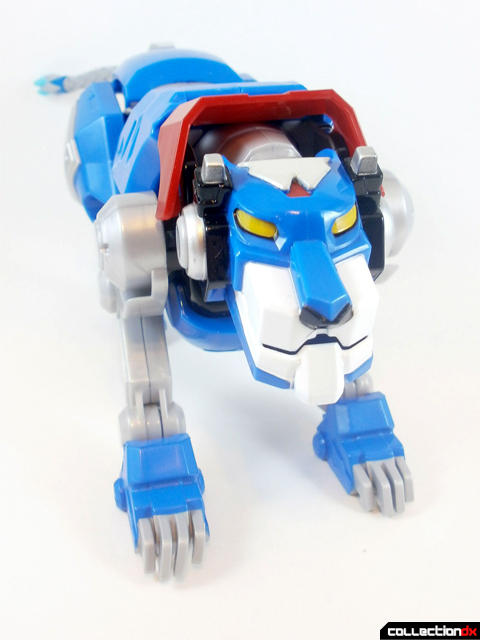 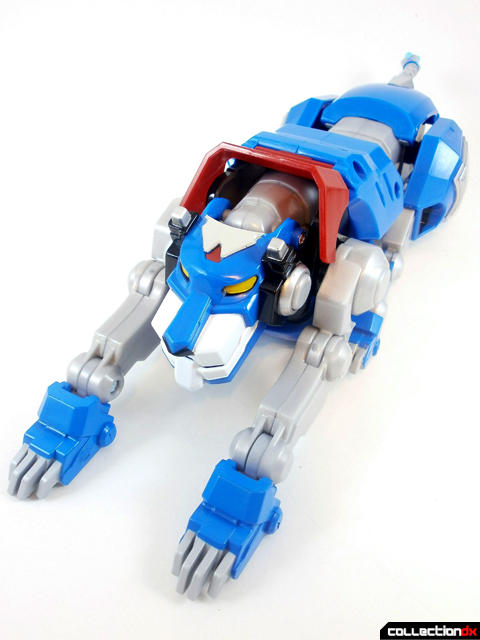 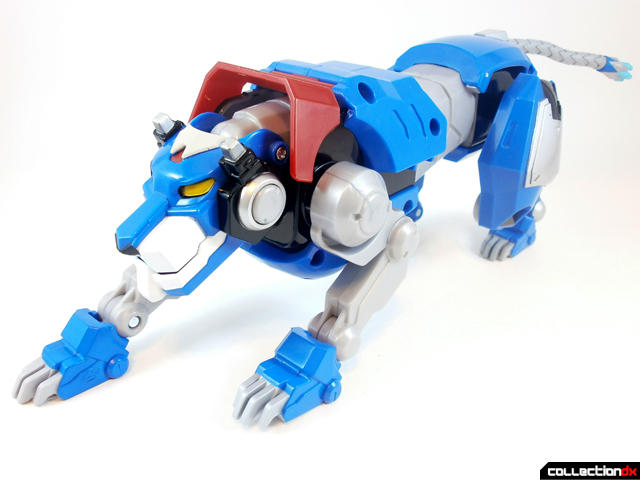 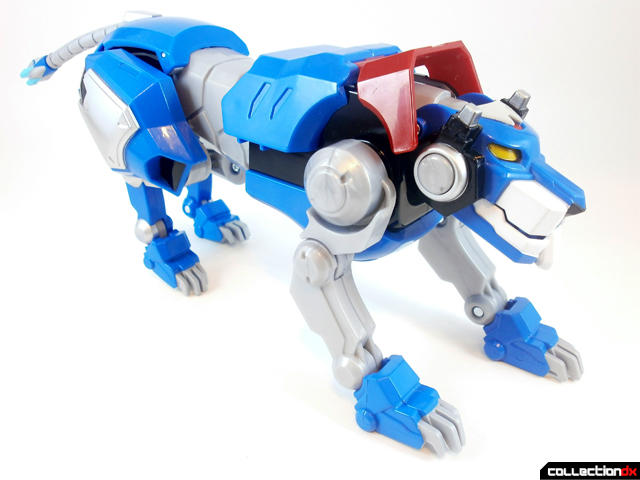 I’m quite happy with Blue Lion itself. All the joints on the legs have ratchet joints, making this an incredibly clicky toy. 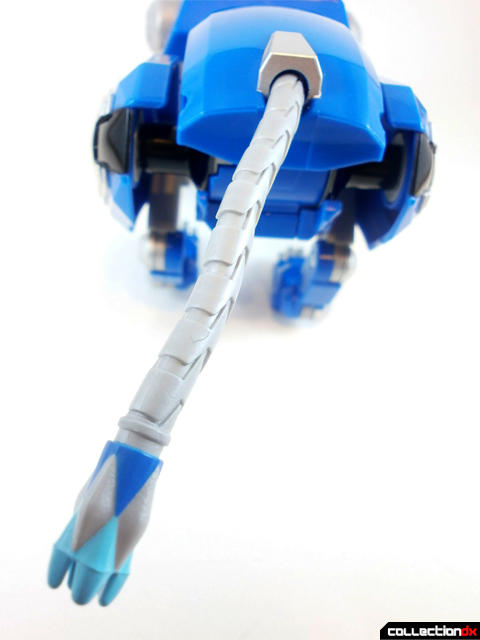 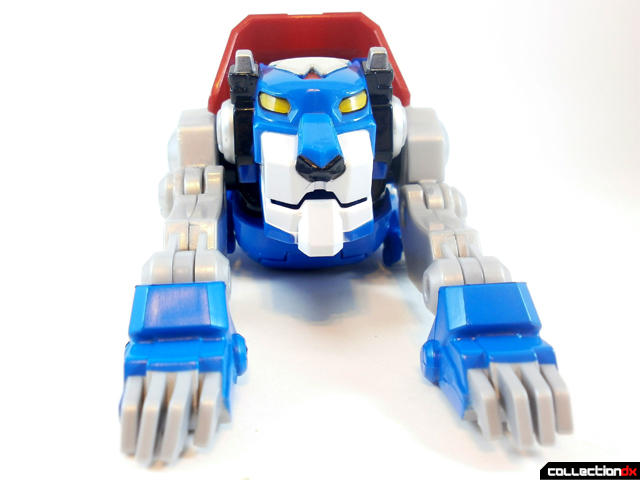 The tail and claws are both made of a softer, more pliable plastic. The tail on my Blue Lion had a paint splotch or two, but nothing major. 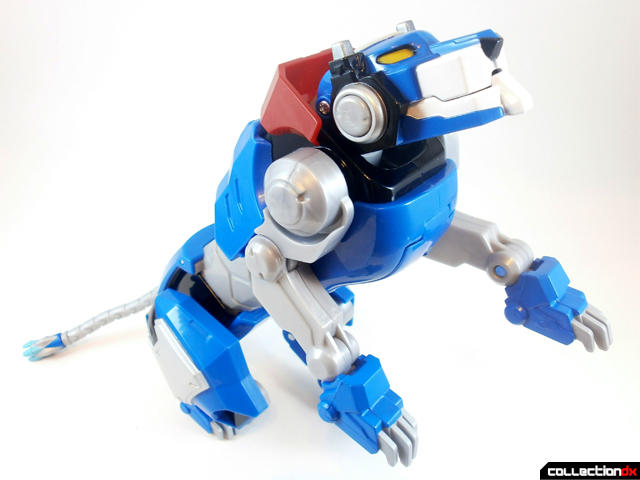 Thanks to the strong joints, Blue Lion can very easily stand on its hind legs unassisted. 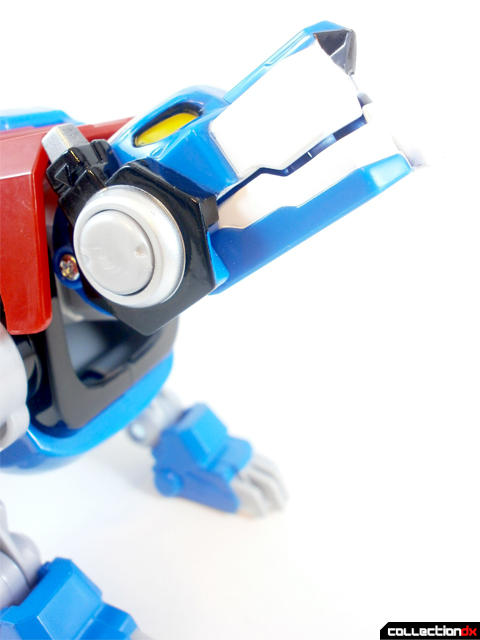 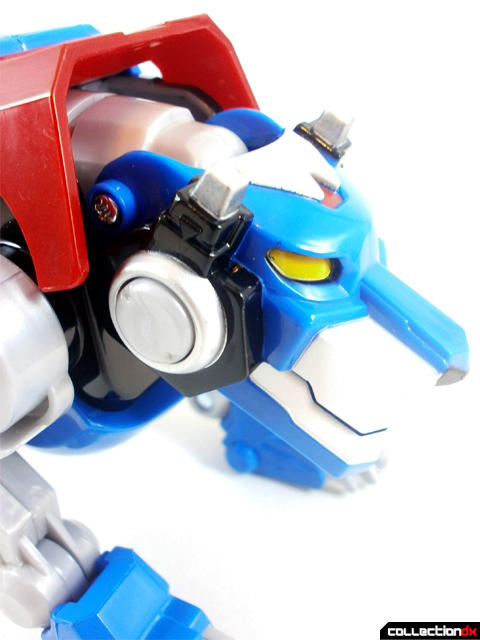 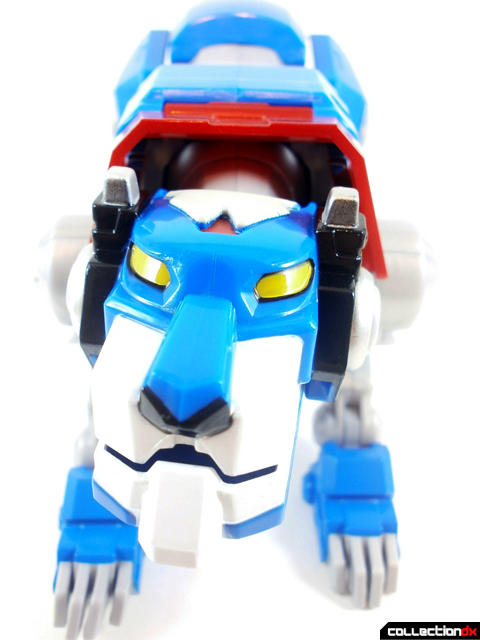 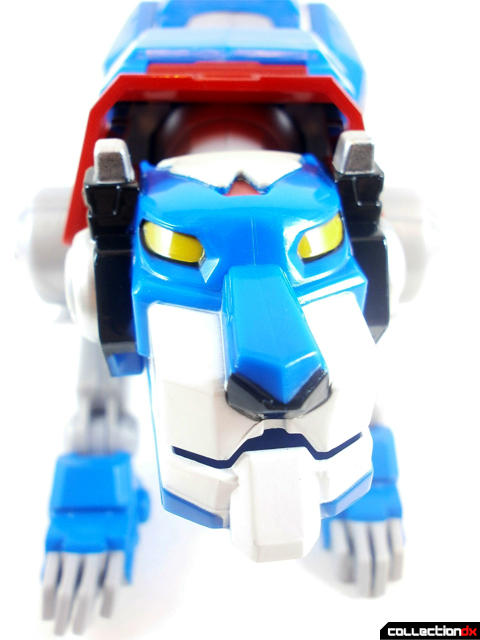 I do have a few complaints about Blue Lion, and they’re all at the head. First off, while the neck joint can move up and down no problem, the side to side articulation is incredibly limited. 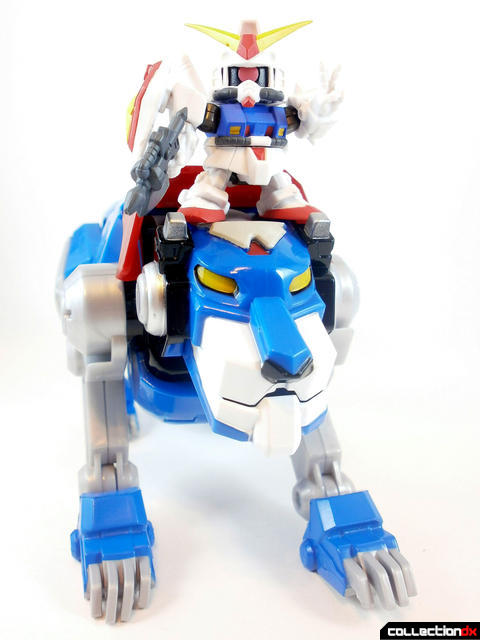 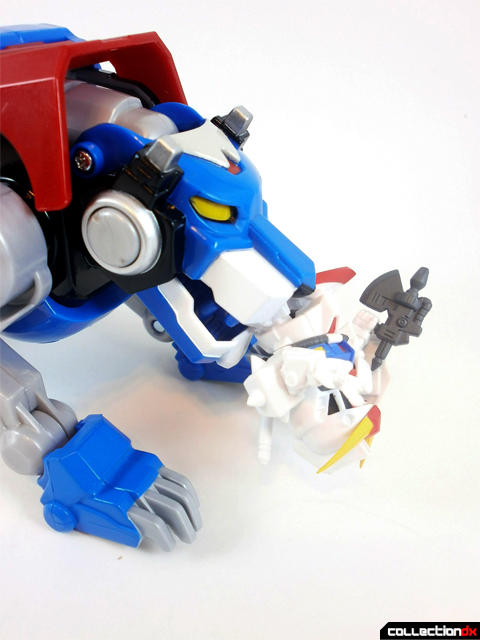 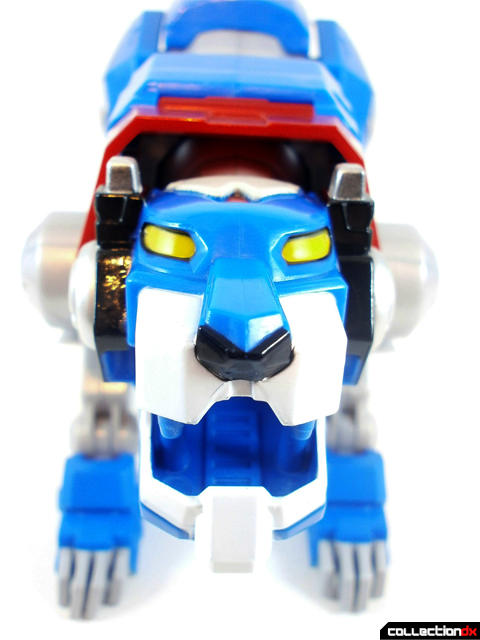 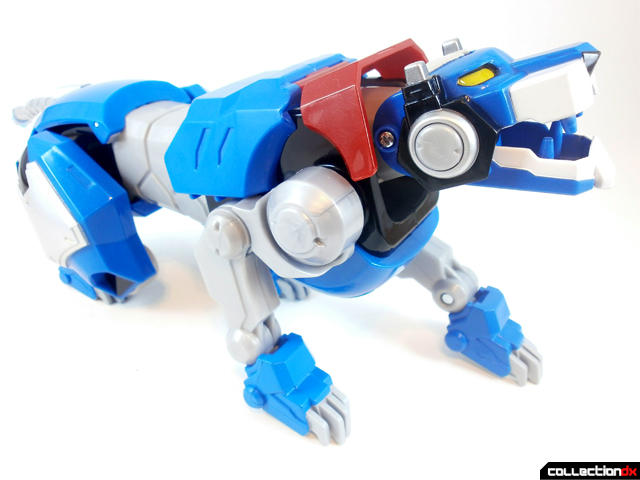 The other problem is that while the mouth opens, a spring immediately closes it again. I had to get awfully creative here for these shots with the mouth open. I really feel like another ratchet joint for the jaw would’ve been a much better choice. 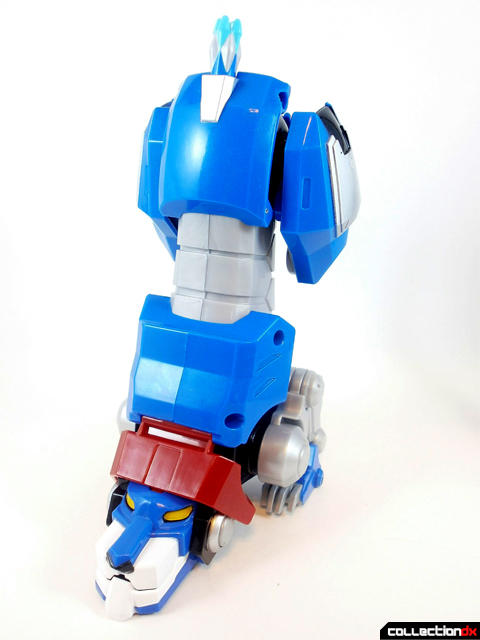 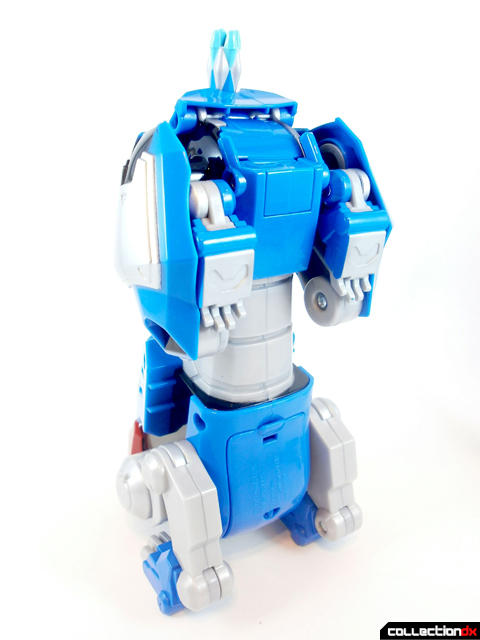 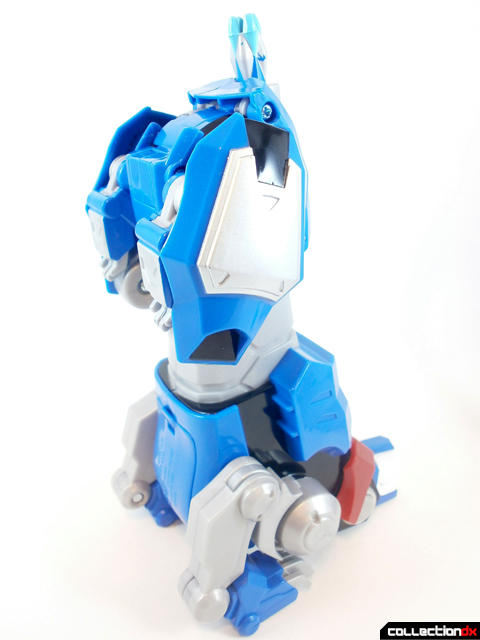 And now, ladies and gentlemen, what you’ve all been waiting for: leg mode. You can even still attach the projectile launcher while transformed. 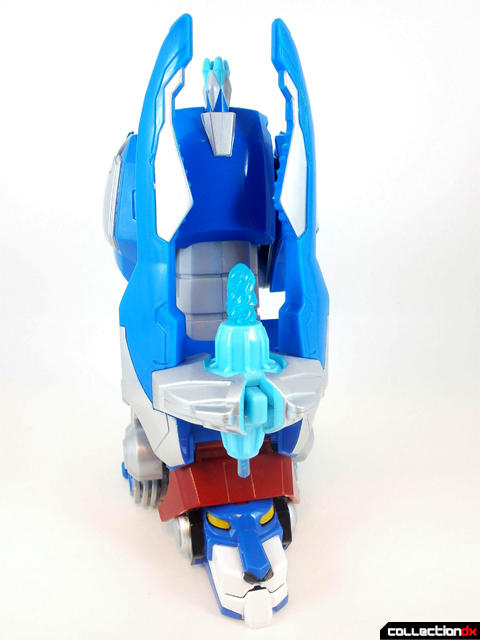 While Blue Lion isn’t perfect, I still really like it, it’s a fun toy at a reasonable price tag. If they ever get reissued I’ll happily pick up the rest of the Legendary Lions.

6 comments posted
May not be out yet

Looking at the scarcity in brick'n mortar stores and e-tailers still having them for pre-order, I'm starting to think they aren't supposed to be out till the 2nd season drops. Some have just been lucky with some stores that didn't care about the street date and threw what they had on the shelves anyway.

I found the black lion at my local Wal-mart, but it was the only one and mixed in with the Legos and board games.

the official release date was january first, they just have been selling out fast.

That's a good sign then probably. I actually just checked my e-mail for the first time in two days and got one from the official Voltron site. They said the toys were now available, so I sped to my local TRU and found the rest of the legendary lions. They actually had everything except the legendary black lion.

So hopefully everyone will have an easier time finding them now or soon.

I read elsewhere that the Blue and Yellow Lions have proper necks, but they're collapsed in the box, and have to be manually extended.

That's true! And I didn't realize that until after I sent this in, so you can imagine I feel a little sheepish. The extension doesn't particularly increase the range of motion in the neck at all, though.