Although it’s been repainted countless times by now, I’ve only ever gotten one, Transformers Classics Skywarp, but actually mine broke a few years ago and now the prices are so high for it that I’d have to get pretty lucky to have one again, either that or just get another use of the mold, but when Sirtoys surprised me with these two Oversized Seeker Knockoffs, you could say I was definitely... surprised, as these two use the seeker mold as a base for a multitude of additions, some better than others, that turn a once great mold into something more interesting but not as objectively good. Regardless of what they are, I’ll be looking at just one of the two, because aside from their color schemes both of these figures are identical.

In jet mode, this Oversized KO Seeker isn’t really showing much of its design changes and idiosyncrasies yet, because aside from its pretty garish colors it doesn’t look too bad. The plastic quality feels ok, but it’s really nothing great for a bootleg, and the original mold’s jet mode is Oversized pretty faithfully. It does have its share of problems like the wings falling off every once and a while, but really it’s not a terrible alt mode by any means either. One notable addition is the single null ray that can be attached to either wing, it holds on very well but looks a little weird considering there’s only one per figure. When compared I have to say I like the white one’s jet mode better than the blue’s, because the white and blue looks a decent amount better to me than the blue and gold seen more prominently in the pictures I took, honestly neither of them looks anything more than really weird, and they don’t feel any more than just ok but they are huge, and pretty harmless so far. 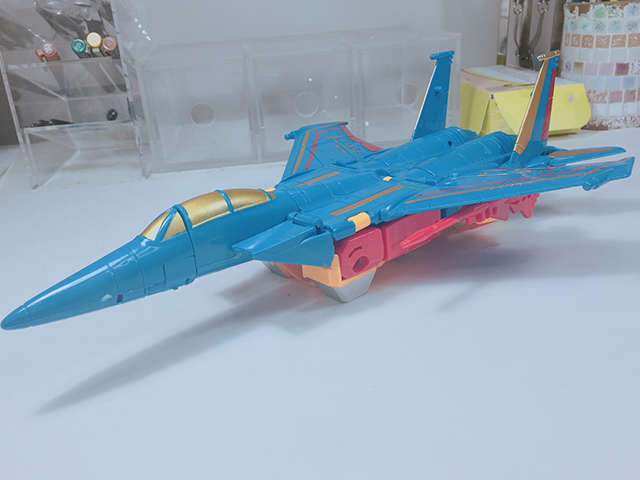 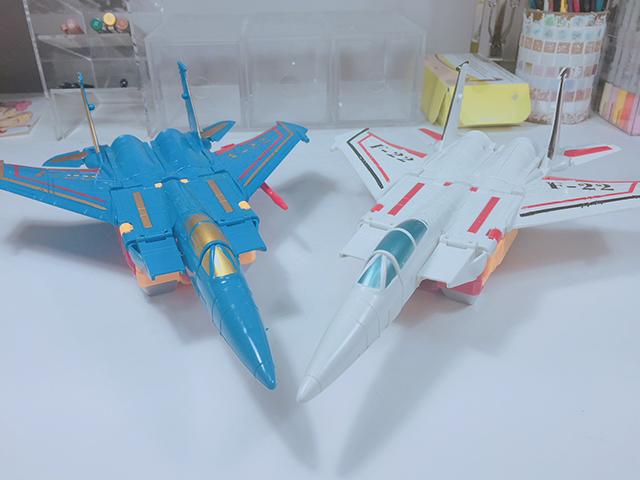 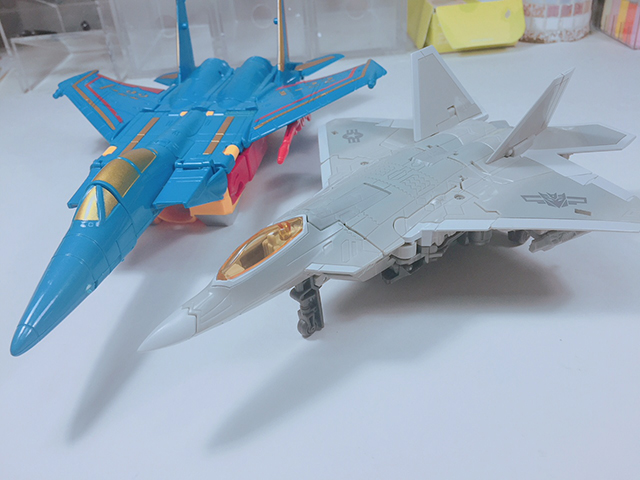 Transforming these two is a pretty decent affair, as it’s a pretty faithful reproduction of the original classics seeker conversion scheme, it just feels a lot worse, not terrible but nowhere near the original, especially considering you have to remove the wings and reapply them in robot mode, where they have to be slanted diagonally at all times and they just love to fall off. I will say that some of the other parts actually do move pretty well, however.

In robot mode, things get more garish and even more confusing, as although functionally these KO’s are pretty decent, the colors are just ridiculous and there are some very strange new additions, the first of which being the pylons on each side of the Seeker’s head can actually flip down, clearing the view of his head, but also making it pretty unable to move. Another strange addition is the added ankle swivel, and they can really only go in which is pretty useless. One addition that I actually really like is in the arms, as they can pivot forward so the Seeker’s single null ray is pointed upright, an added bit of articulation I wish the official seekers had. The other main addition here is a giant gun of indeterminable origin, they hold it pretty well, and can even hold it up, but it just looks so out of place even if you consider how our of place these figures color schemes make everything on them look. Aesthetics aside, these figures don’t feel horribly cheap, they move pretty well have reasonably tight joints and have some more articulation than their official counterparts, so I can’t say they’re that bad at all here! 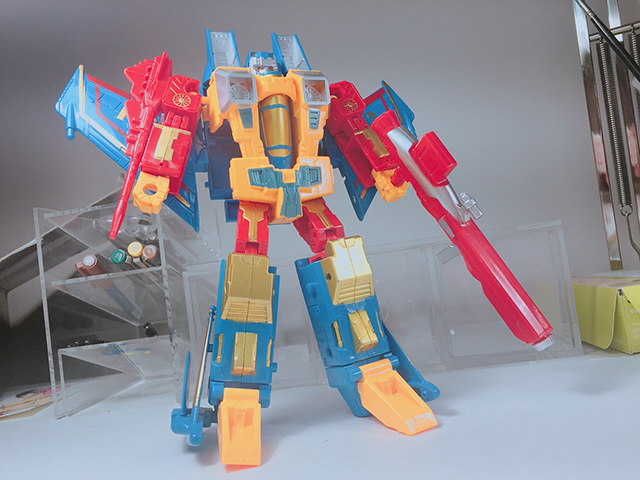 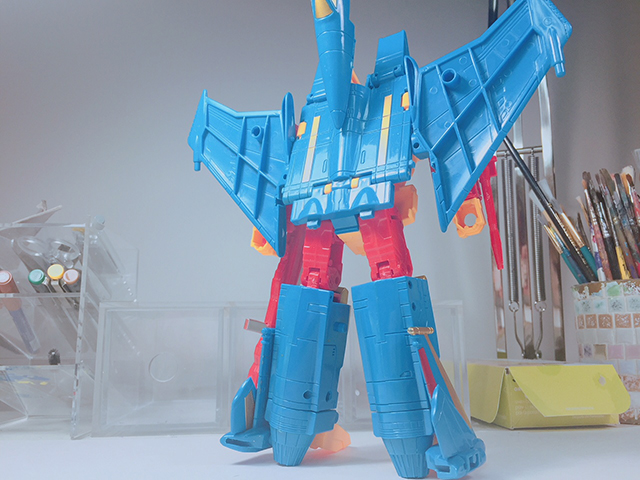 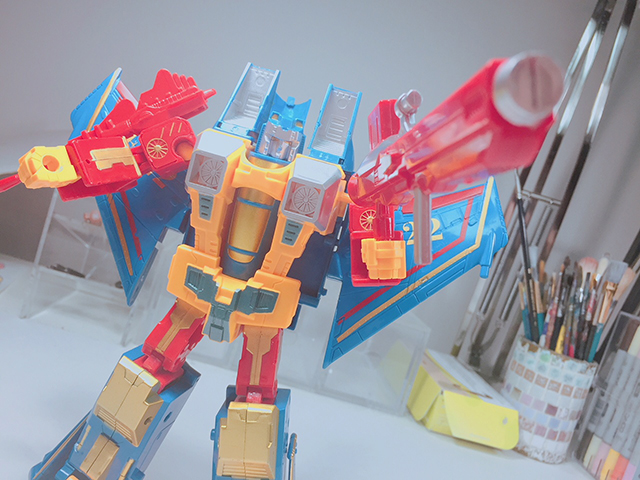 As far as size is concerned, this Ko Oversized Seeker is about in between the sizes of a Leader and Voyager class official Transformers figure, these two really tall, I wasn't expecting them to be this big before I first saw them. 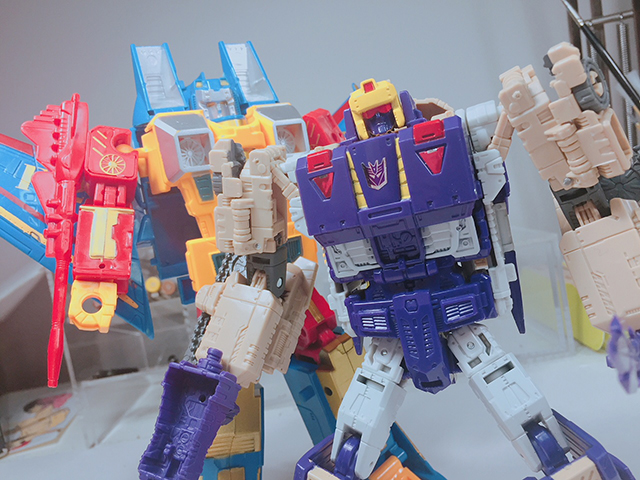 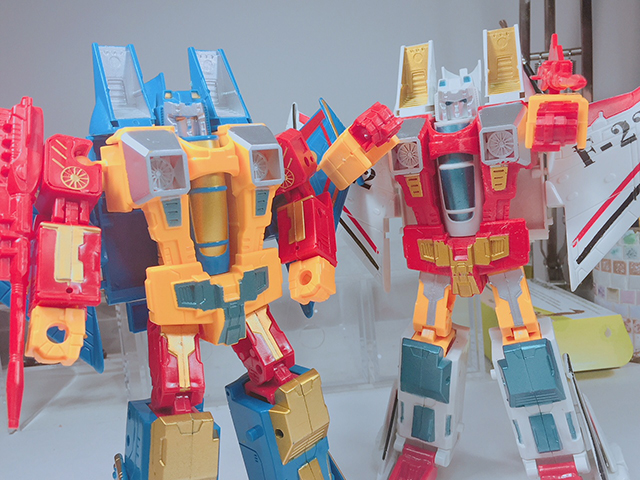 Overall I’m pretty confused about these Oversized Knockoff Seekers. For everything they do well, they also do something weird and they don’t look particularly decent but they actually are. These figures are very functional, very weird and relatively fun, I don’t know if I would recommend them per se, but they are still a very harmless purchase nonetheless.