Being a modeler today is to be bombarded with unending release of fantastic kits. Although I mostly focus on Macross and other 80’s Mecha, I could not help but notice the 2016 release of Bandai’s revolutionary Figure Rise Standard Model kits of the Dragon Ball Z characters. 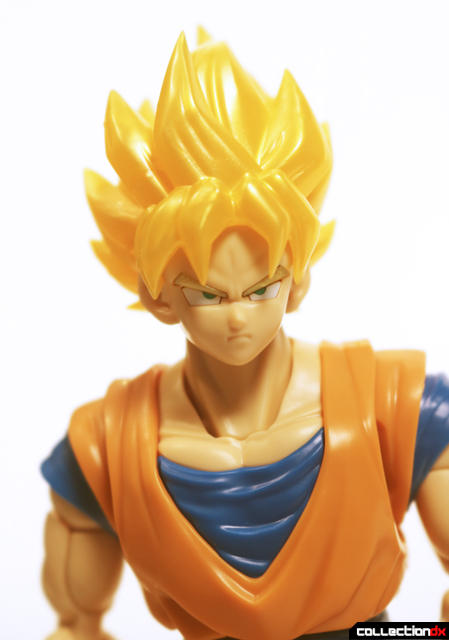 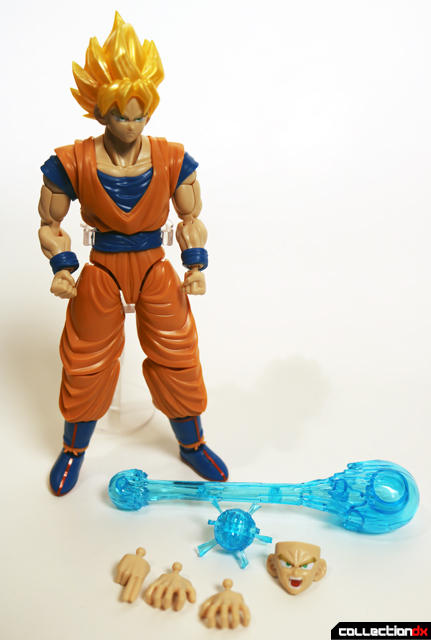 With so many Valkyrie kits on my mind, it is always nice to see how other anime subjects are being handled in model kit form. These Dragonball Z kits have always fascinated me and it is great to have had the opportunity to build a review example for CDX. 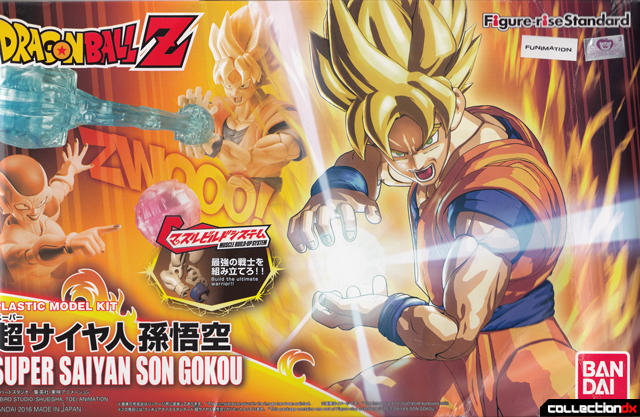 Just in case if you have been on another planet, Goku is the lead character of the iconic 80’s anime and manga series Dragon Ball and its subsequent TV sequels and feature films, which are still made to this day. 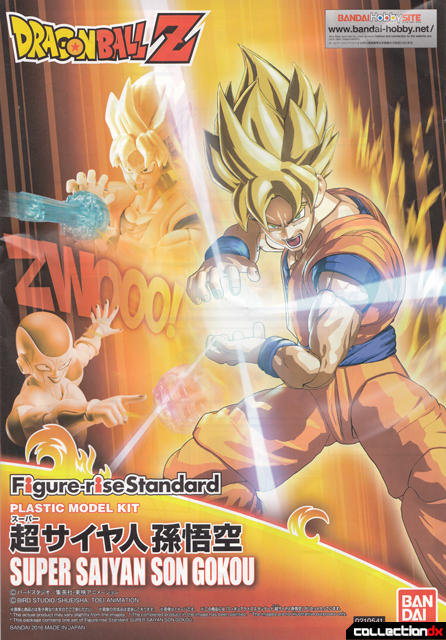 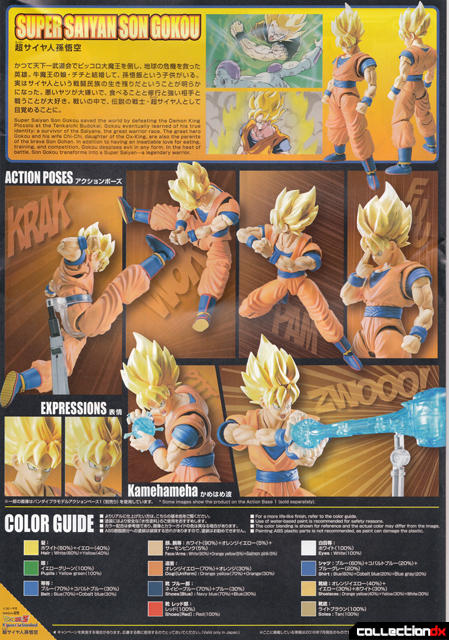 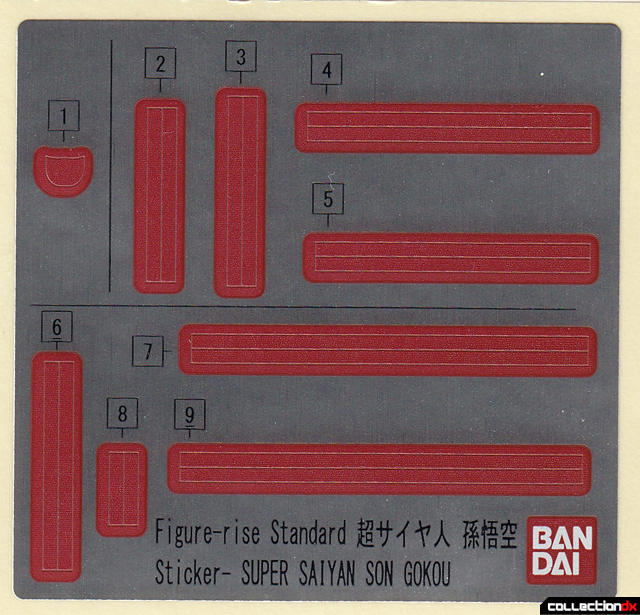 A little different approach to this kit, if you have known some of my other build reviews I tend paint my kits but I though it would be fun to build this kit right out of the box without any paint applications, and just using the stickers provided. No pressure here just a little fun building a kit out of the box. 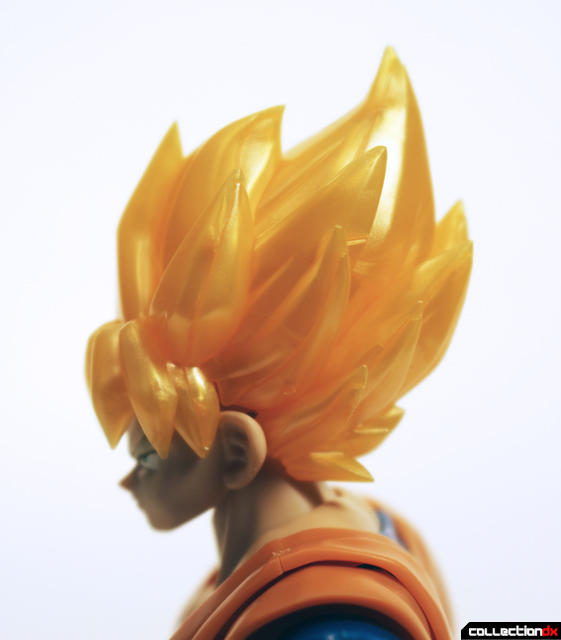 The first assembly is Goku’s head. One stand out feature is Goku’s hair, Bandai did an excellent job designing his multi spiky layered hair. The hair is four layers wide and look excellent when assembled. I also like the face features and how they are assembled. The metallic pearl gold colored plastic used for the hair also looks great, I would not have the heart to paint over nicely molded plastic. 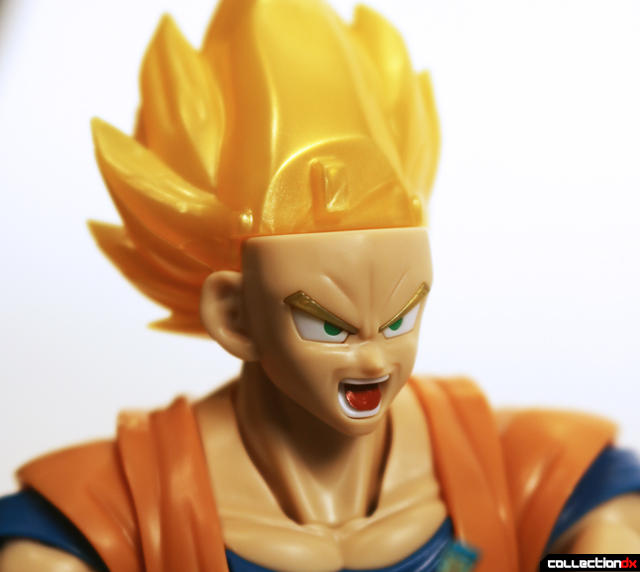 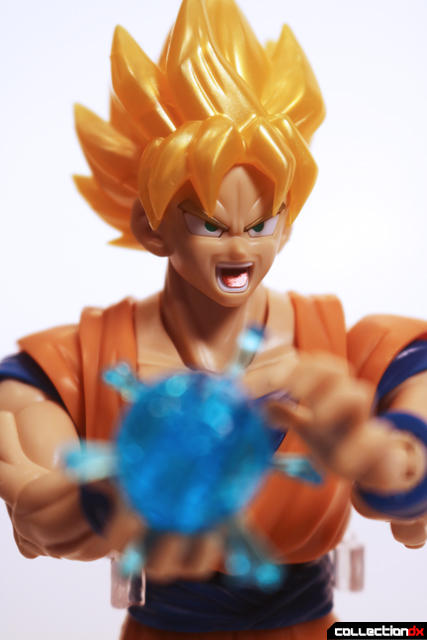 The two faces are made up of four different colored parts and when assembled look great and expressive. The two faces include a closed mouth determined look and a screaming open mouth face. The open mouth includes a sticker for the tongue color. 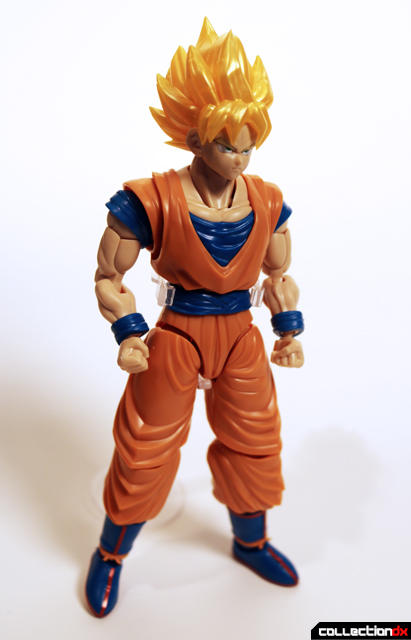 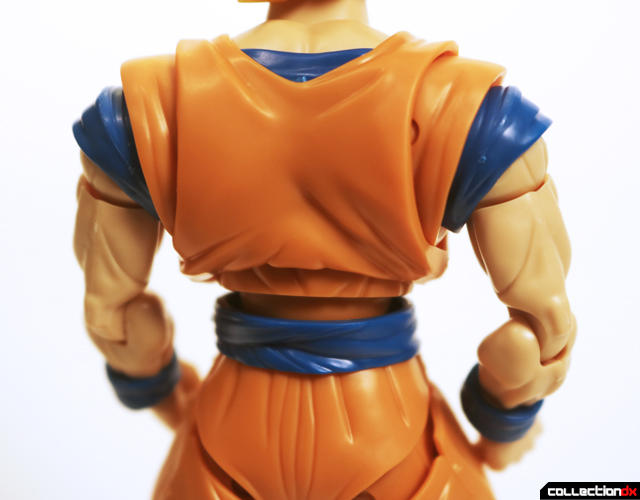 Goku’s Torso is an interesting assembly as you can see there are complex group of joints that will come in handy when it comes to posing the figure. I also like the blue shirt details from a separate color parts sprue. I suggest if you are going to paint the figure, be leery of gluing the front and back halves together just in case if a joint falls out, as it would be difficult to repair. I also like the blue shirt details 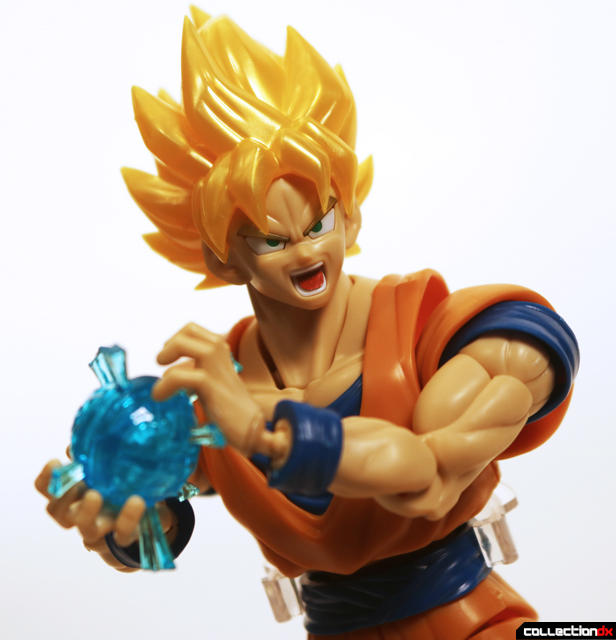 The arm details and poseability are excellent. I like how the muscles are assembled but still have a swivel arm rotation. The shoulder area is ingenious, balancing poseability and keeping the look of loose clothing of martial arts clothing. Three sets of hands are included, two fists, two open hand and one with two pointy fingers. 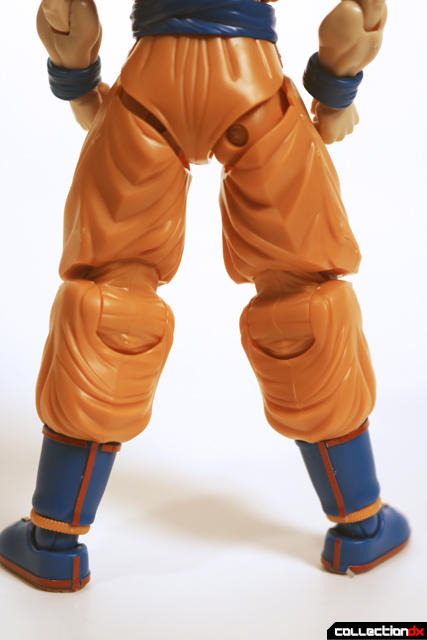 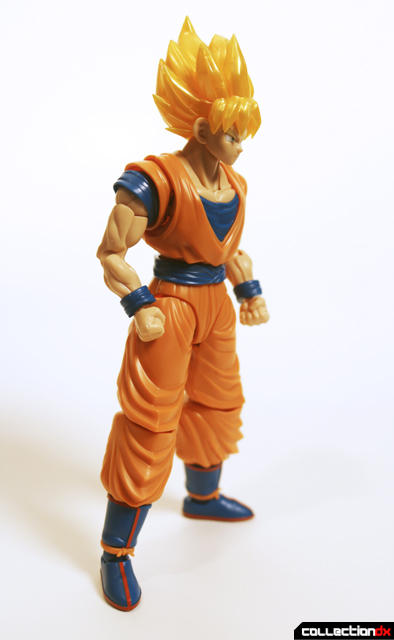 The legs and hip joint are also interesting; they are also double jointed like the shoulders. One can pull out the legs slightly from the hip to make a dynamic kicking pose yet push the leg back into the body for a standard standing pose. The boots pivot on the leg while the heel is on ball that can rotate. I like the lace detail on the heel. The knee joint is spectacular as the clothing is still represented even when the knee is open, a very unique feature. 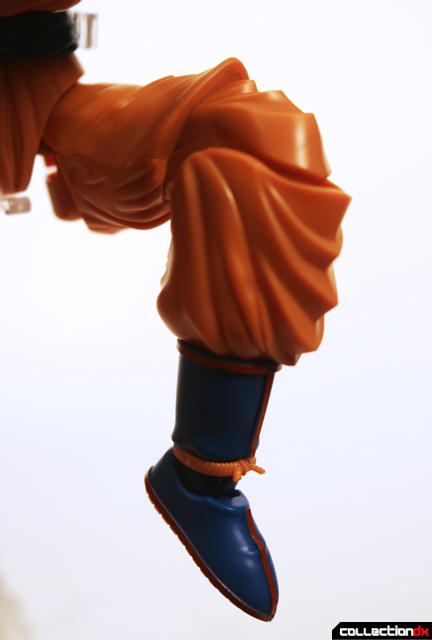 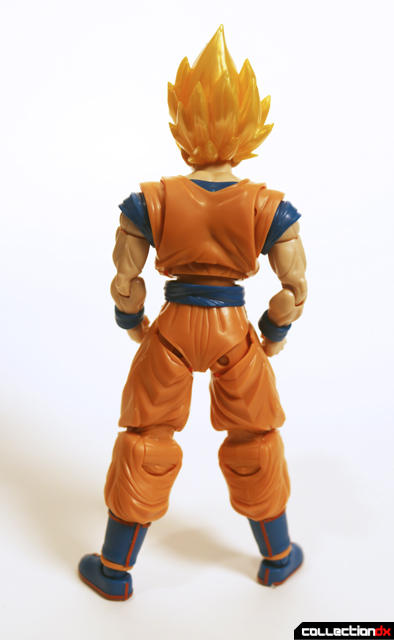 The red trim on the boot is represented with chrome red stickers. I have never been a fan of sticker sheets that come with Bandai kits, they never seem to have enough adhesive and seem to unglue from the parts are they are applied. Even if I were to not paint the kit this would be the one detail I would suggest painting. 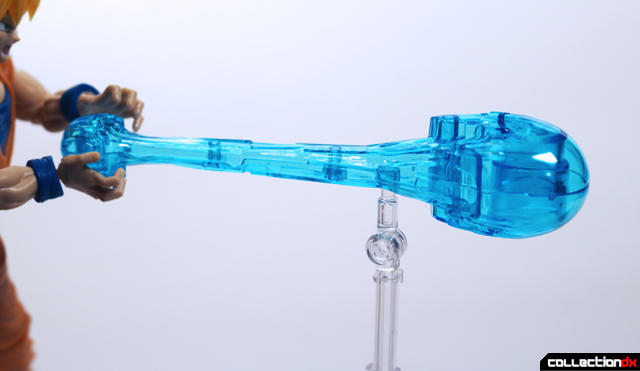 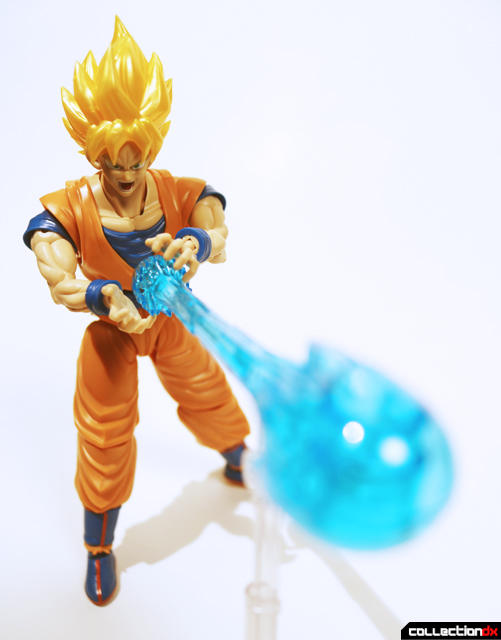 Goku’s signature Kamehameha attack is represented with clear blue blast with a clear stand. The Kamehameha ball is also included and is easily assembled as two parts. There are indented finger spaces in the parts for the fingers to connect to the ball to get a better grip. The Kamehameha looks impressive when posed with Goku. A stand is included to help balance the Kamehameha while it is attached to Goku. 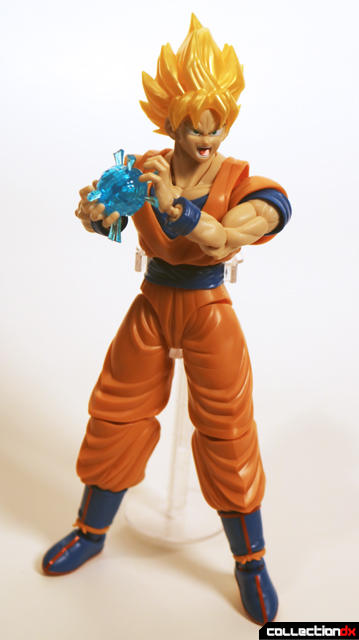 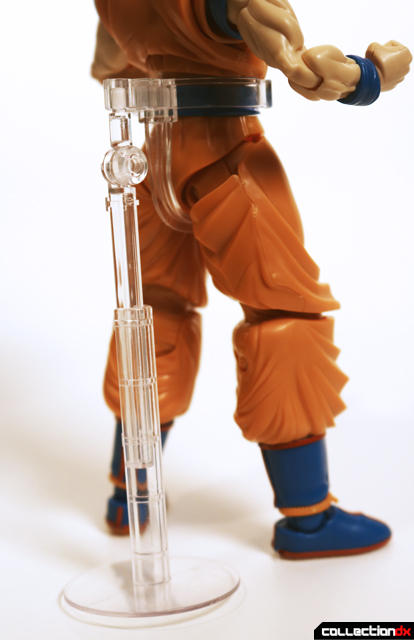 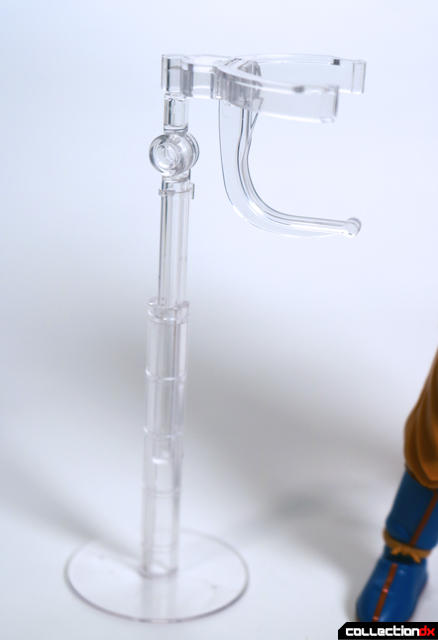 The clear stand has a double use. A clear adaptor is included to help support the figure using the Kamehameha stand. The part snaps into the body and the stand attaches to it firmly. One can adjust the height of the stand for different poses. 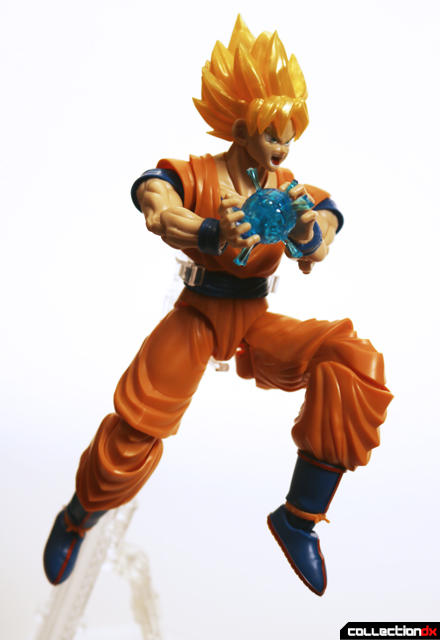 Poseability is excellent even for a model kit. I really got of kick out of making different poses. 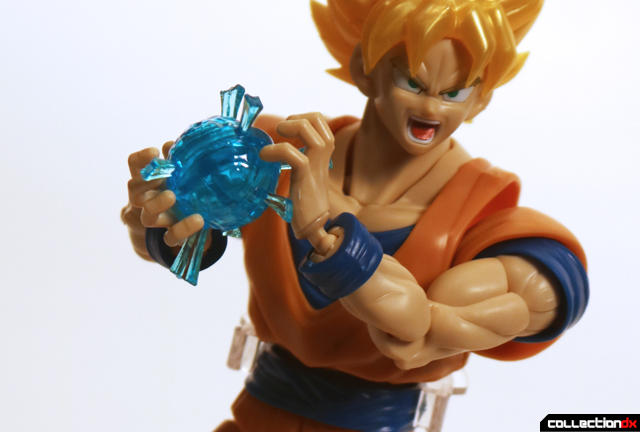 © 2016 Review and Photos by Leonardo Flores.