That's right. We're not talking about Black Lio Convoy, Black Convoy, Nemesis Prime (any version), or even Sentinel Prime (pick one). We're talking about THE Optimus Prime, leader of the villainous Autobots over in the "Shattered Glass" universe. Introduced in 2008 in a BotCon comic, it's the Transformers equivalent of Star Trek's Mirror-verse. The storyline has gradually continued, and Hasbro & Takara have released a few toys here and there. And as usual, Optimus gets the most love (AKA toys), so it's not surprising that he'd be the first SG character to get the Masterpiece treatment. 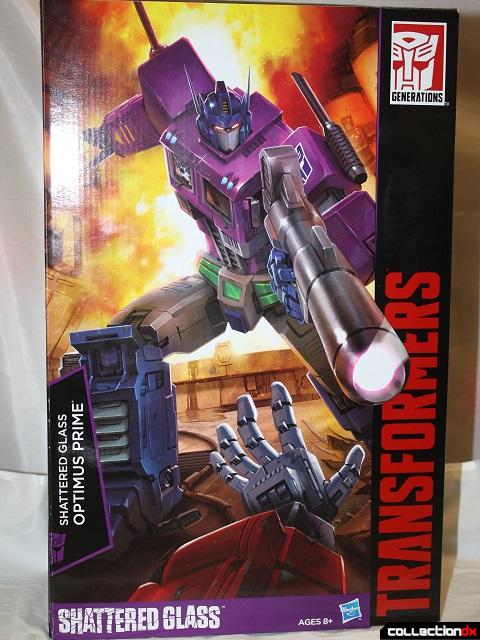 I never had any interest in the MP-10 mold till now because I'm still thrilled by MP-01/04. But the upcoming MP Megatron got me thinking, and the purple/evil factor this release has sealed the deal, so I took the plunge. The front of the large box has a nice, glossy piece of art. 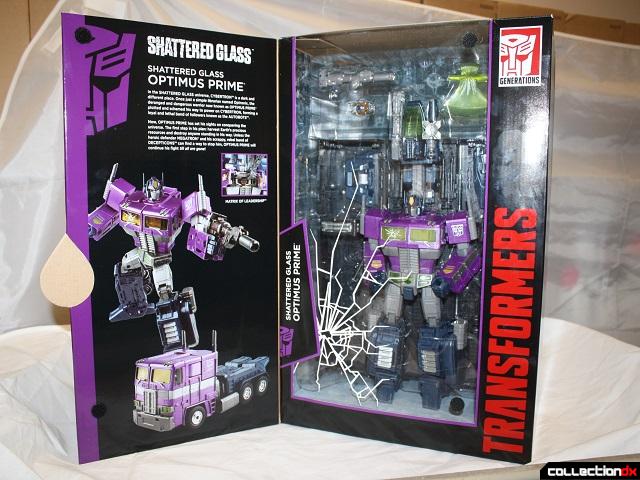 But it's also a Velcro flap. Opening it reveals some photos, SG Prime's bio, and every piece that comes in this set. Everything you'd expect is included except Roller. I was so excited for the whole thing that I managed to not notice till I took everything out of the box. The shattered effect on the window is a nice touch too. As you'll see, Hasbro Asia went all in on the theme. 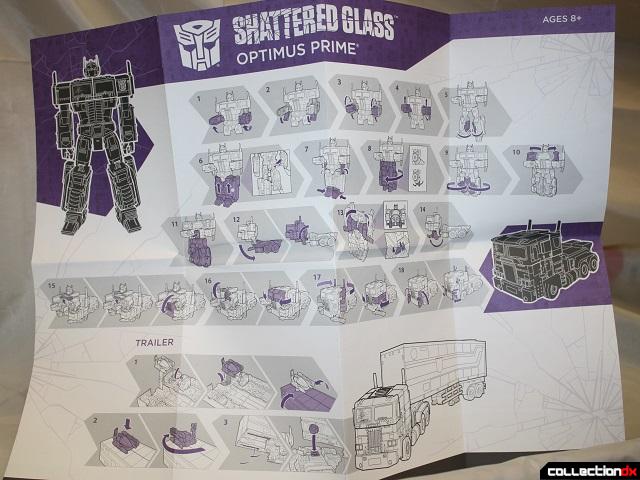 Case in point. The instructions (only additional content) aren't as complete as Takara's, but they're better than Hasbro's and don't miss anything major. 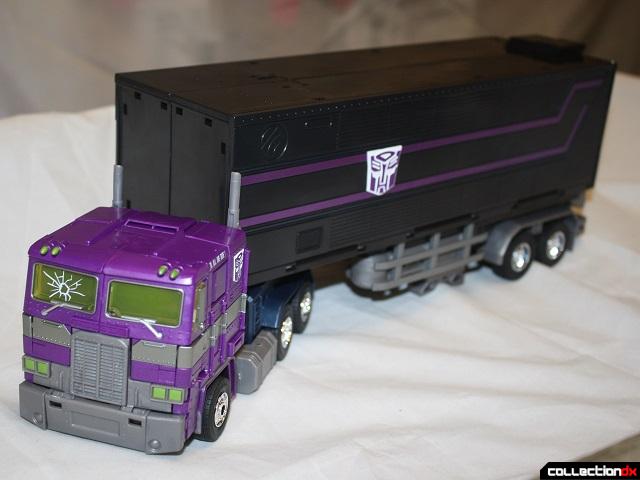 SG Prime's alt mode is perfectly solid with the trailer attached. It's not a tight connection, but holds fine once it's tabbed in. All the rubber tires roll smoothly, so he's easy to move around. 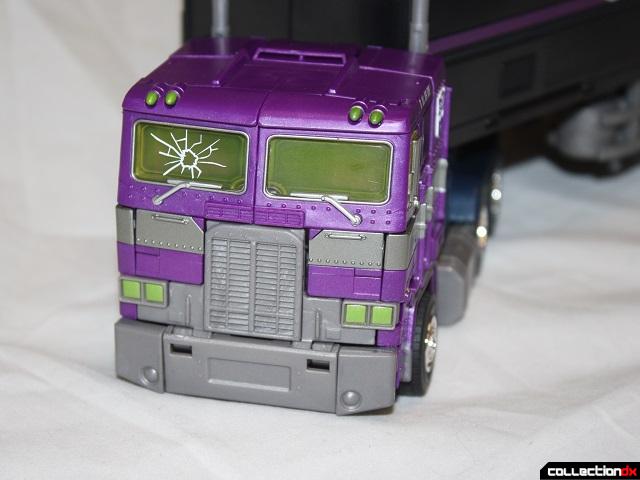 The deco is what really stands out front to back, so as much as I noticed it, there are some little things I didn't notice till after I took pics. In lieu of red, blue, & silver, SG Prime's cab is purple with green lights, windshields, windows, and a flat grey for almost everything else. 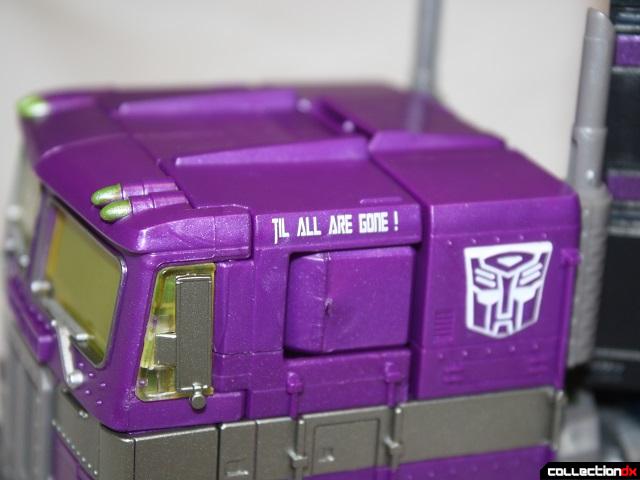 His twisted motto "TIL ALL ARE GONE !" is printed on the left side in the middle. It wasn't till I looked at this pic that I realized his side mirrors can be folded out. I discovered later that his exhausts can also be pushed down, which exposes a round bottom that makes them look more connected. 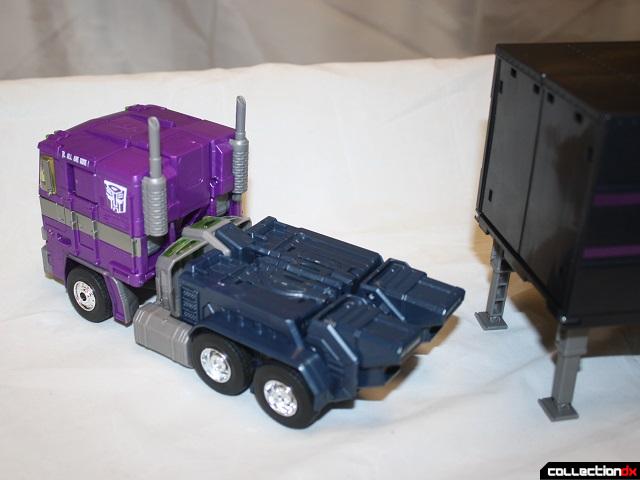 One gripe in vehicle mode is that his rear half doesn't tab together very well. From above the gap is noticeable, but it's not that bad. Not sure if it's mine or a problem specific to the mold or SG. 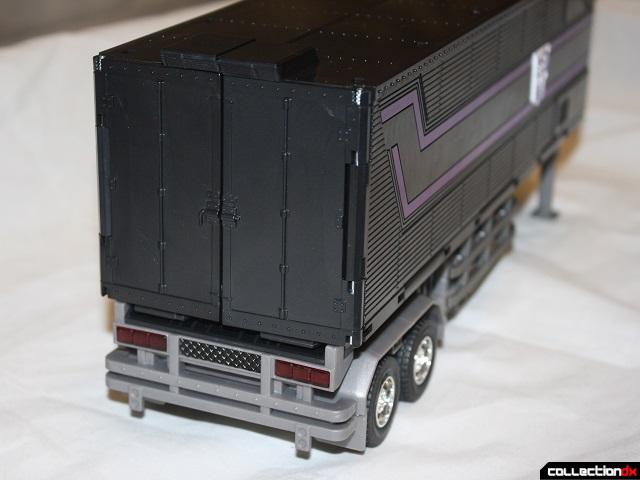 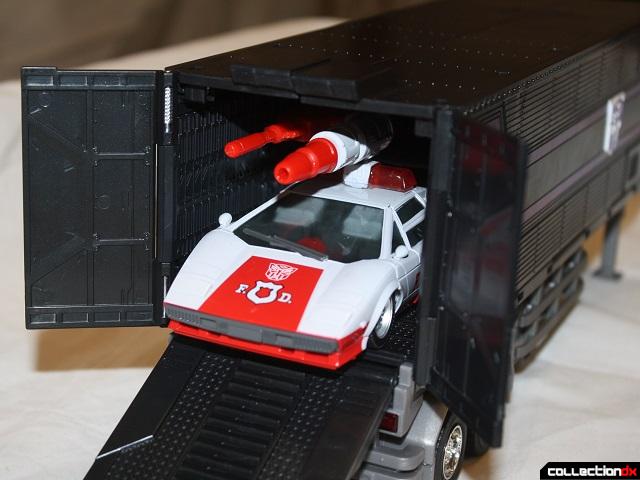 The trailer stands fine on its own. It's easy to open the back doors and pull out the ramp. 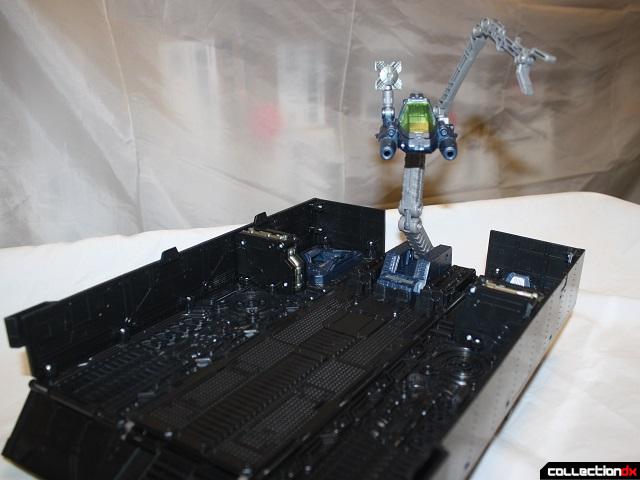 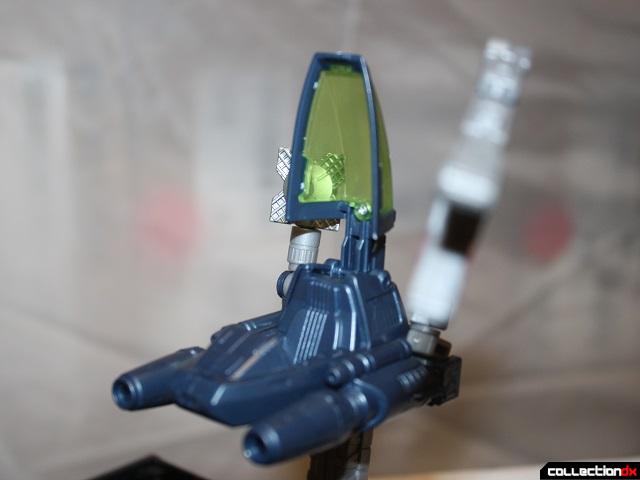 Combat Deck doesn't look as different because we've already seen it go black back in G2 and with a couple of other figures. But the control module also goes green in the canopy. 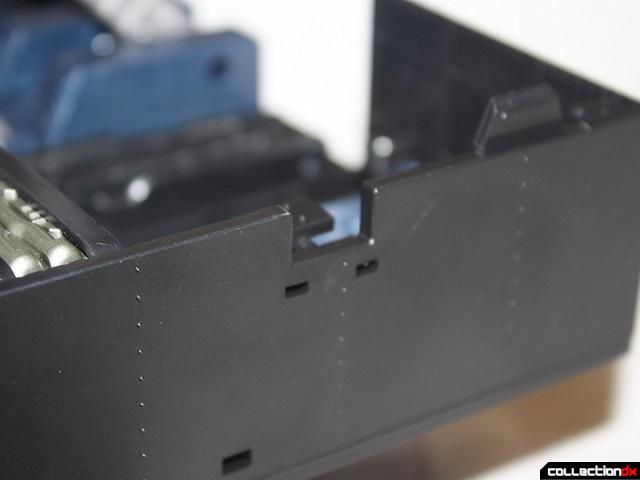 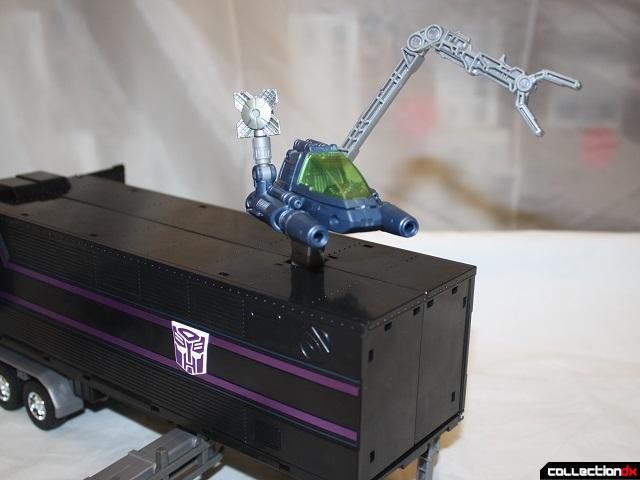 The arm & dish can be positioned as usual, and the control module can be mounted outside of the trailer. But what's new that I wasn't aware of is the flaps that can be folded down to make the opening or up to seal it. Nifty, and if nothing else, it'll help with dust. 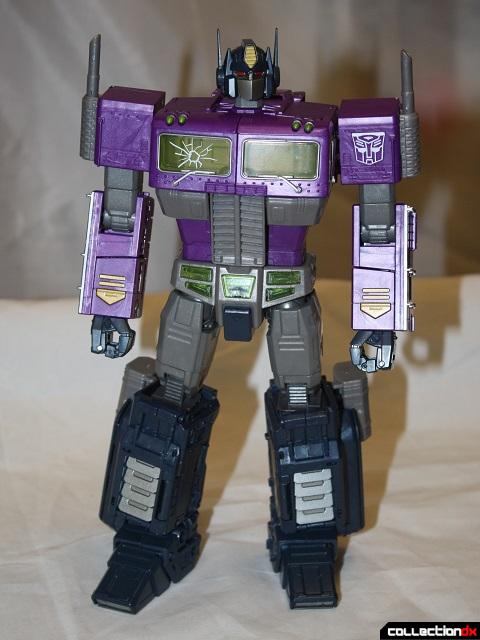 In robot mode, SG Prime stands close to 10-inches. He looks great and feels even better in hand. Transformation, similar to MP-01/04, is easy enough that I didn't need instructions. The metal feet give him a steady base upon which to marvel at his Bizarro-like visage. Color-wise, what's new are his red eyes and yellow crest. The purple Autobot symbol is always there, but now it really stares you in the face. 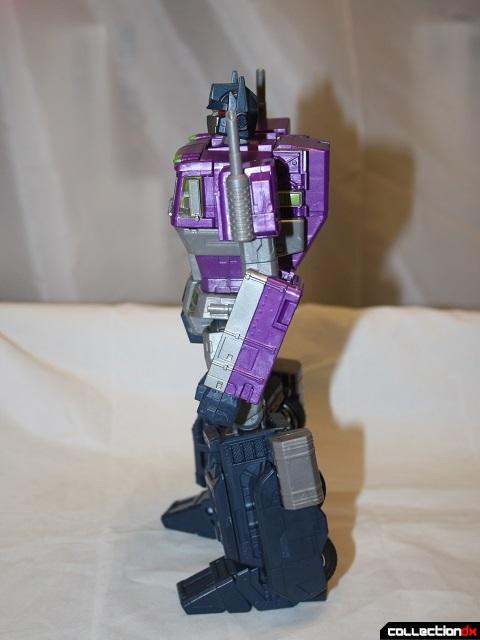 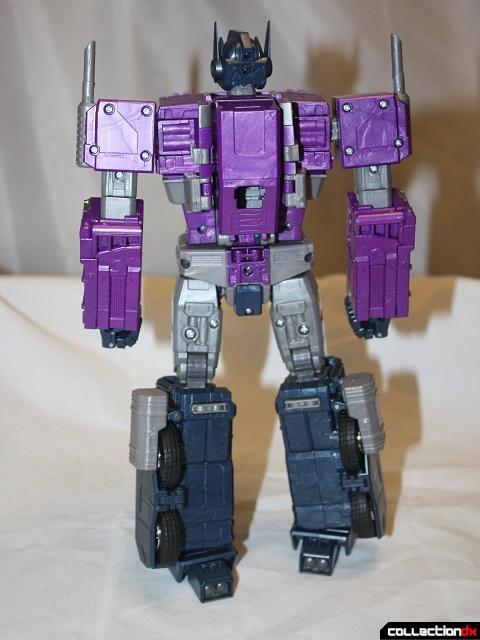 From any angle, he is an impressive specimen. There's nothing shoddy or cheap to see on him, but he does have a couple more minor flaws in his gimmicks. 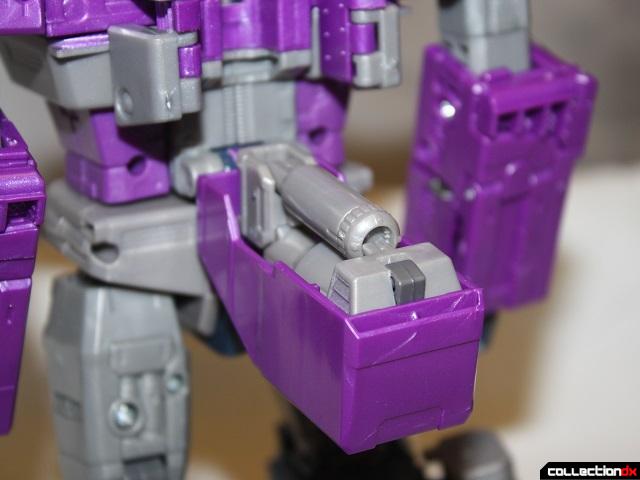 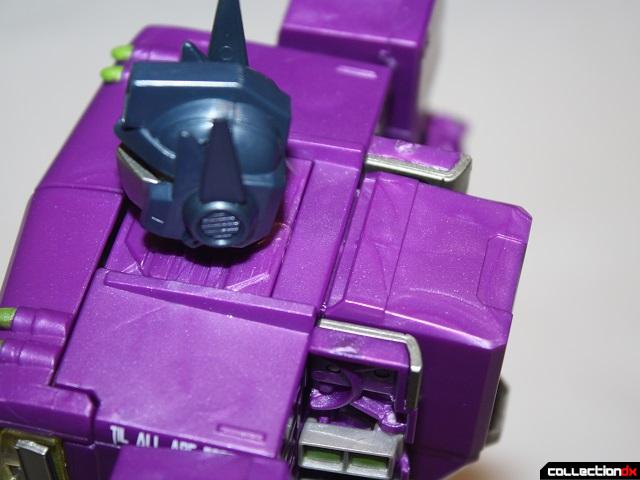 His laser rifle folds up perfectly fine and fits into his back like it should, but when you close it up, it almost immediately comes loose and folds back down within a minute. 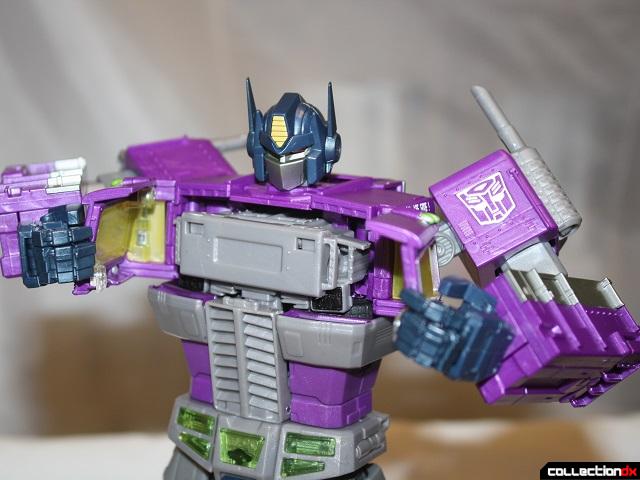 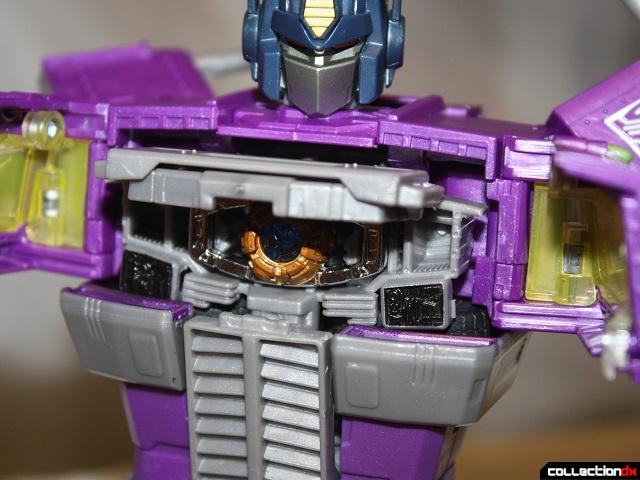 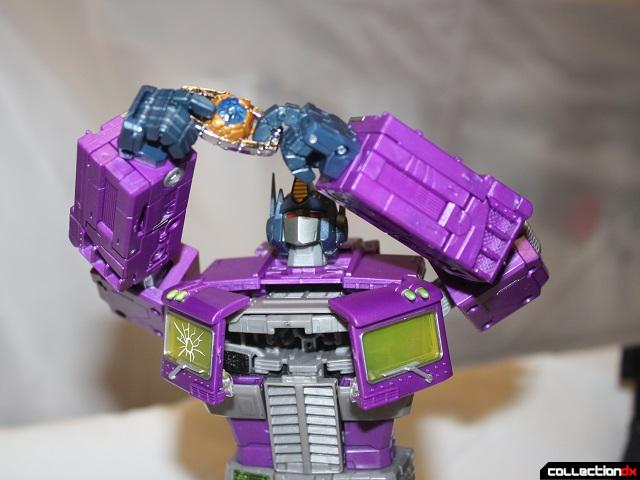 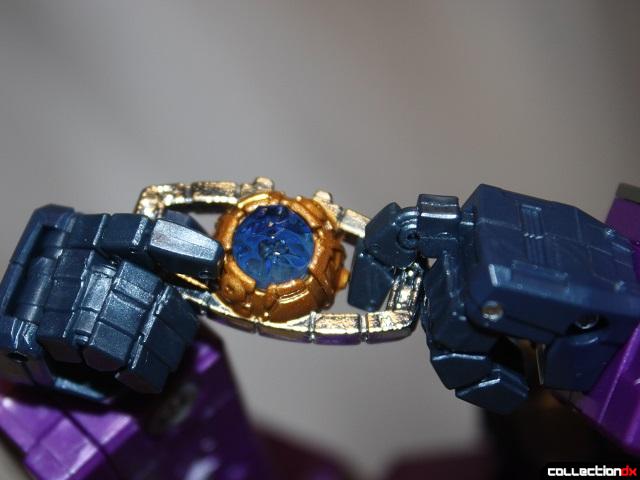 His chest plates and inner compartments are easy to open and his matrix is a pretty, solid chunk of metal with a nice translucent center. It also fits perfectly when the round side is facing back, but once inserted, his chest plates won't sit flush anymore. But that's all that's wrong with his robot mode. He's otherwise fantastic. 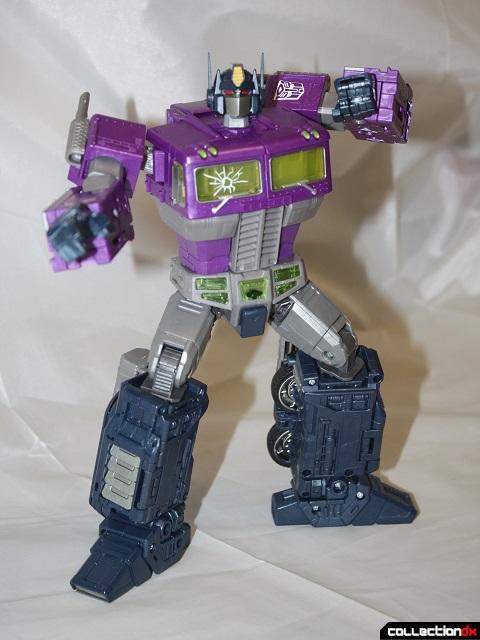 I don't like that the antennas are independent. That's a small step-back from MP-01/04. But they definitely improved the neck. It now actually looks like Prime has a neck, and the base plate being able to tilt gives him a lot of subtlety. 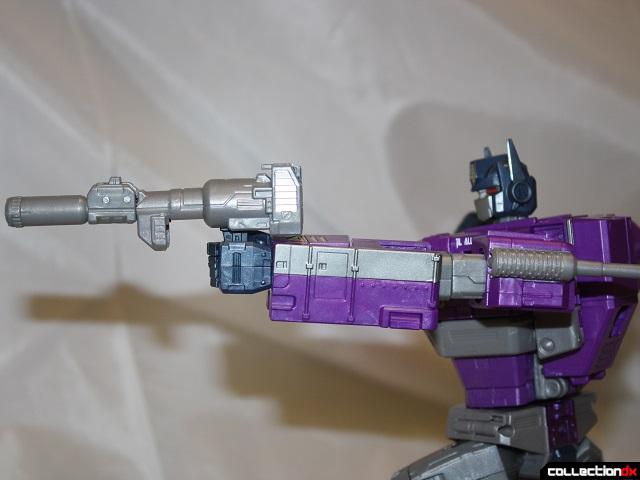 For weapons, SG Prime has the same gear but in different shades and colors. His laser rifle has gone from black to silver/grey, and he holds it perfectly. 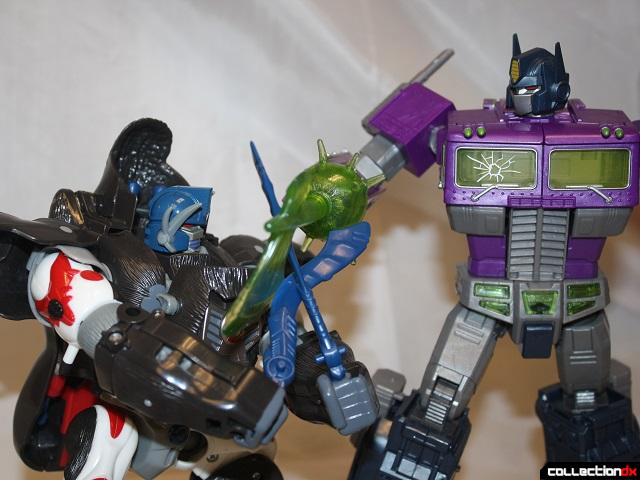 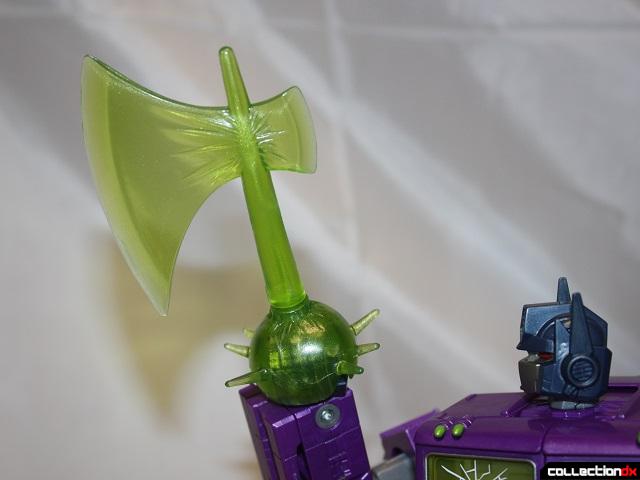 And his energon ax is green to match his windows and lights. I think it's kind of dinky that it just plugs onto his hand like a glove, and that it has to be his right hand. But it still looks good and isn't flimsy. 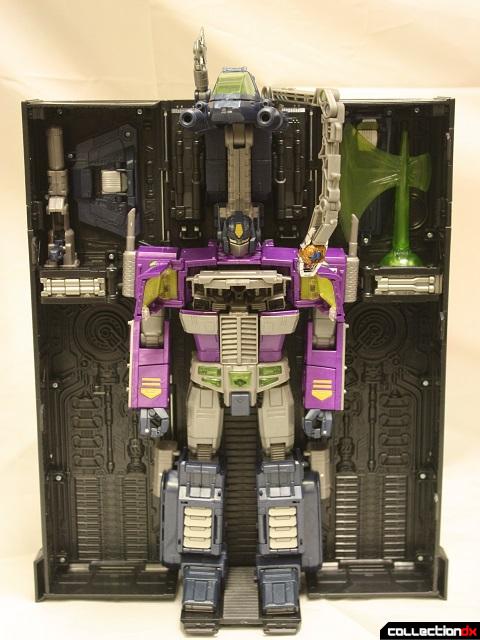 Ah, and as usual, Combat Deck can serve as a repair bay. It's very presentable, but the weapons just sort of sit in place, so the trailer isn't a great storage place for them if it isn't vertical. 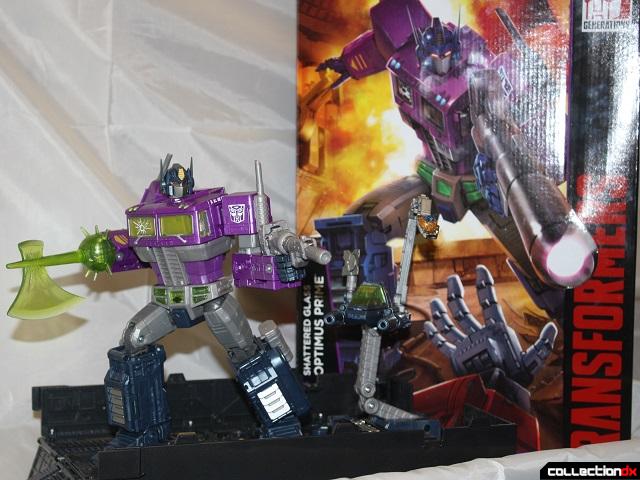 Overall, SG Prime is a great toy and a fine addition to the Masterpiece line. I still don't think of him as an improvement over MP-01/04, rather just a different take. But I appreciate the effort and how he scales with everyone post MP-07. That he's "Shattered Glass" and visually different from most Optimus toys puts him over the top for me.

At $180+, he's not the cheapest one out there. But if you don't already have any of the other versions of MP-10 (seven total as of this review if you don't include this, three sans trailer) and have been riding the fence, he might be the one for you.

The original version has the same problem of tabbing together. To help with this, the feet are supposed to slide and tab together. I don't recall if this is on any of the instructions, but I do remember figuring it out while fiddling with my original one.