Robot Triceretops does not fare as well as his wolf-brother, but he's still pretty cool.

Yes, Triceratops is the proper spelling, but on the package it's "Triceretops". Either way it's a transforming dinosaur that would feel right at home in the Beast Wars era of Transformers. It's an original design based off of a transformation pattern that has been used many times before by other cheap toy makers.

Made by Toy Hero, Robot Triceretops is one of many transforming toys put out by the company. Just check out their website to see the full lineup. (http://www.toyhero.com.hk/)

Like Force-Wolf, the toy comes with the blister card packaging that has tabs on the back for easy repackaging. The art and design of the card is great, making these stand out amongst other cheap toys. 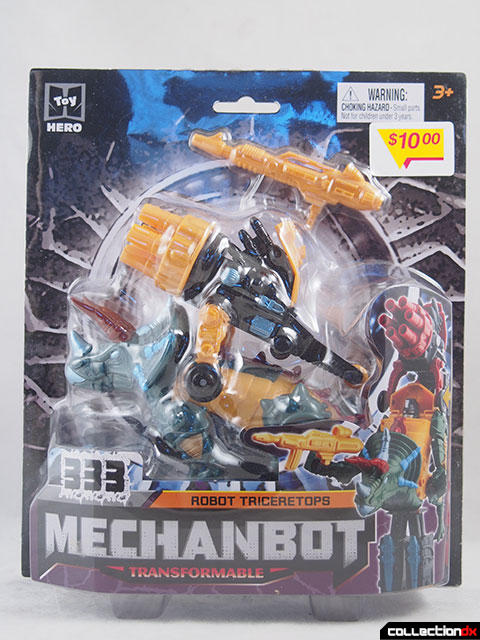 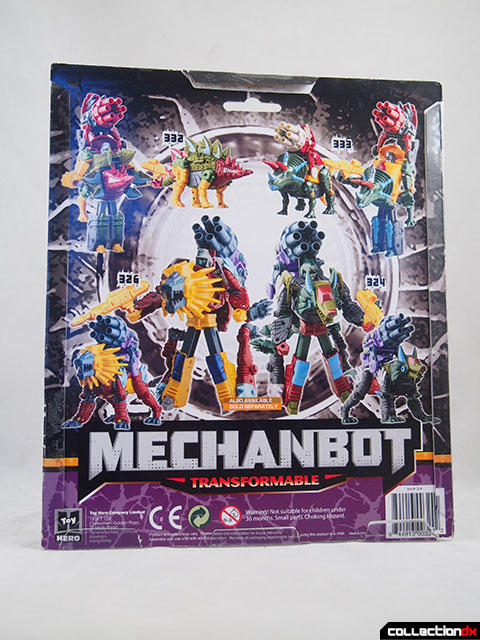 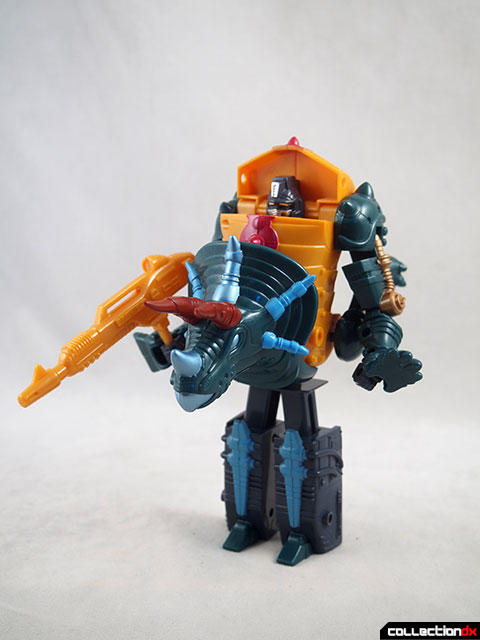 It's sort of an ugly robot mode, and it really doesn't hold together well. None of the parts in the chest click together to hold a stable form, so you are always adjusting one part or another to make it look right. It comes with the same yellow gun as the Force-Wolf. 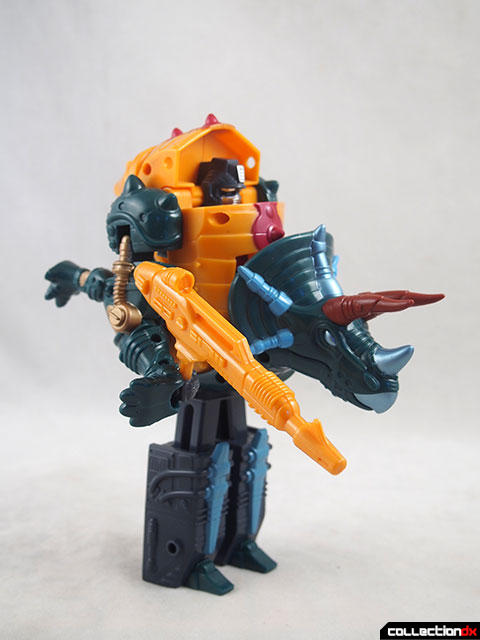 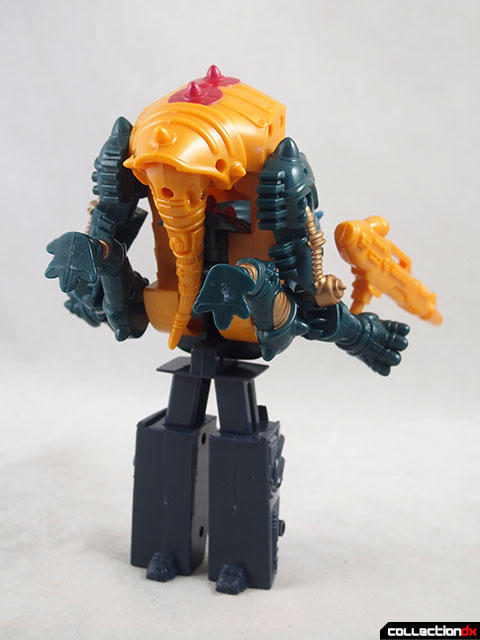 The same cannon assembly is included, albeit in different colors this time. In robot mode the cannon clips onto the body of the robot at the two wheels. 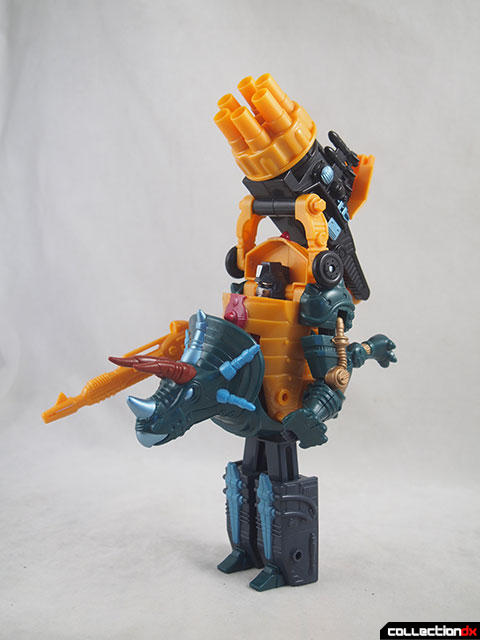 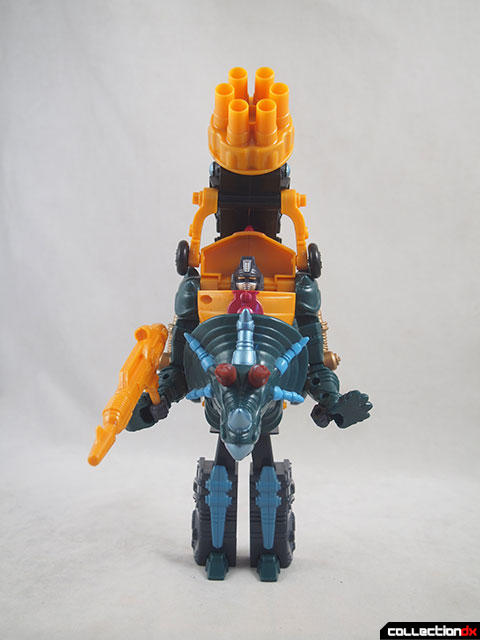 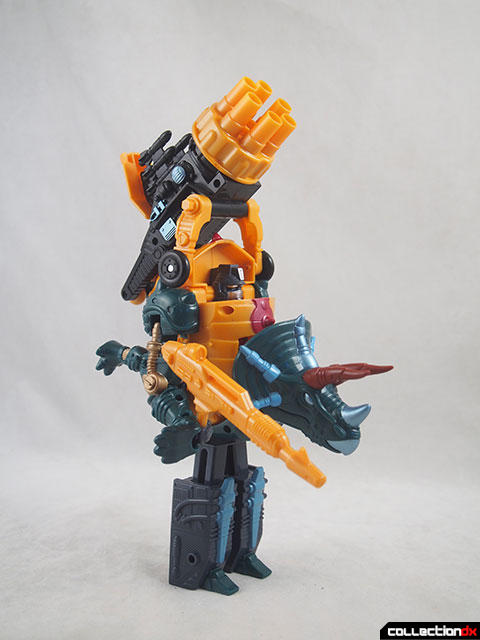 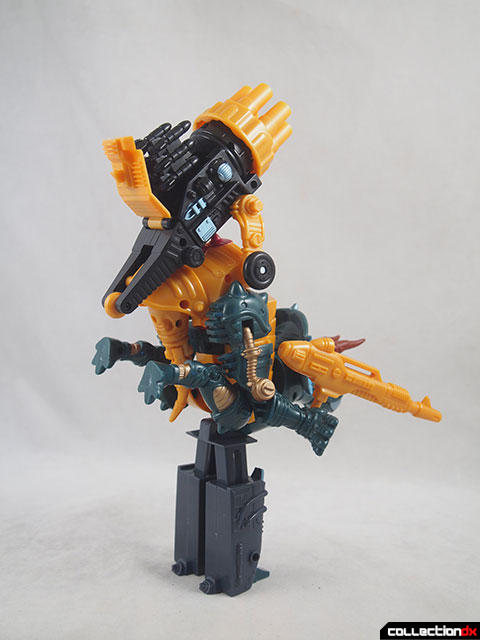 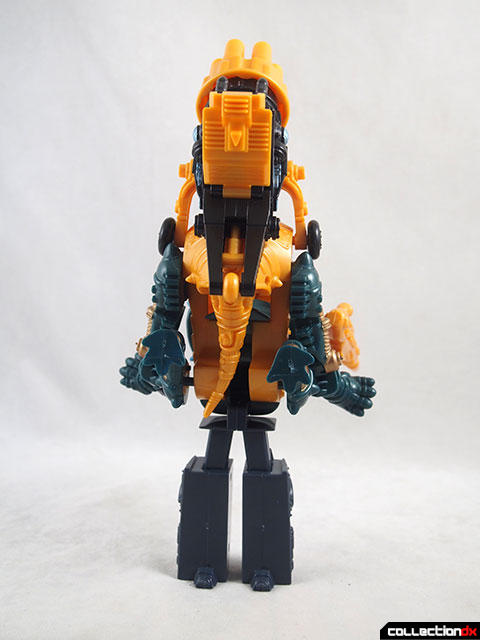 Dinosaur mode is where this really shines. Unlike robot mode, dinosaur mode has little pegs to hold the parts in place, resulting in a rather satisfying alt mode. 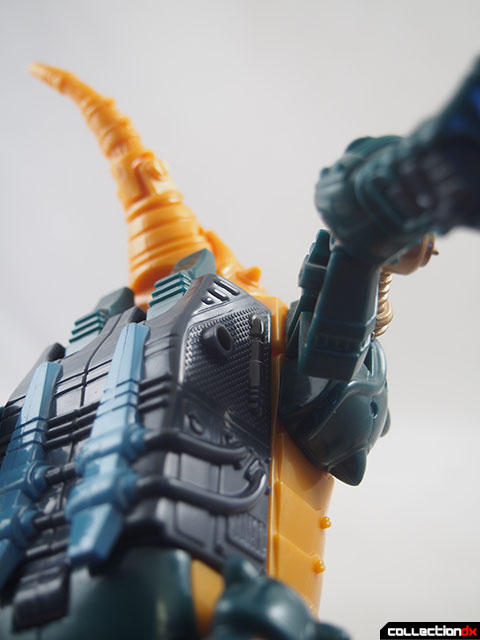 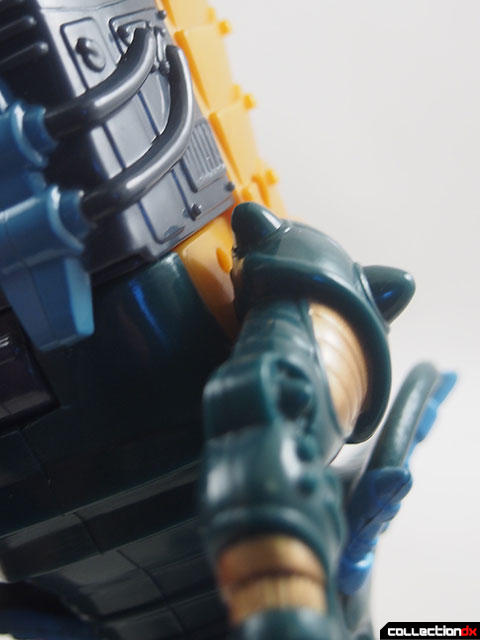 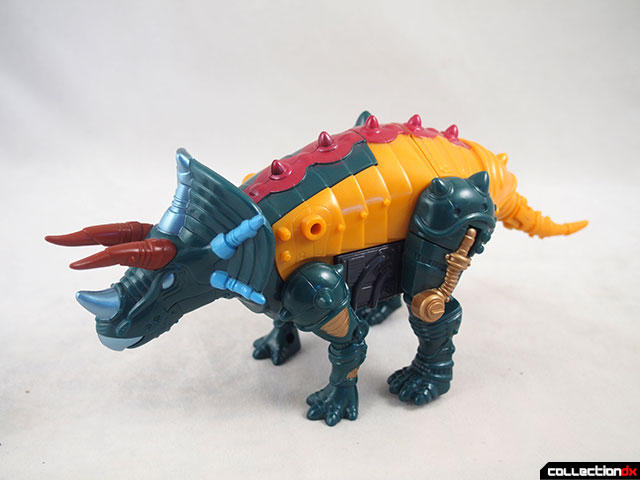 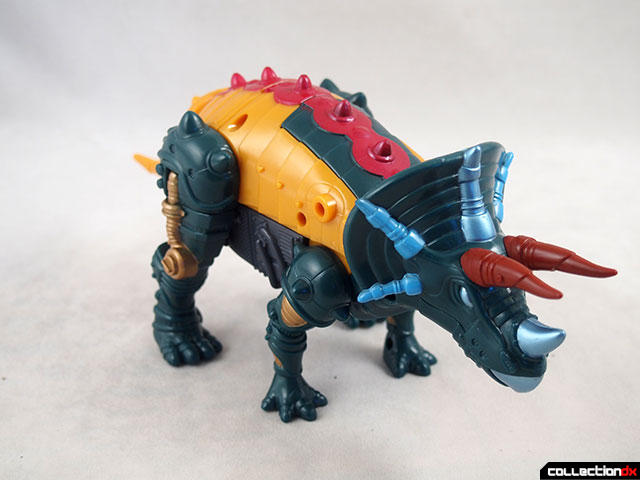 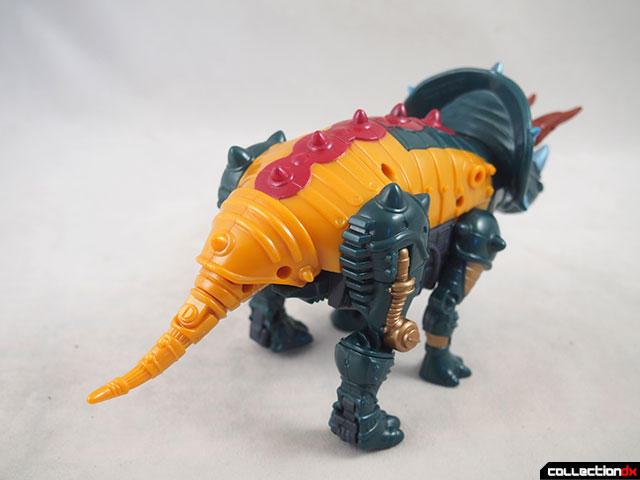 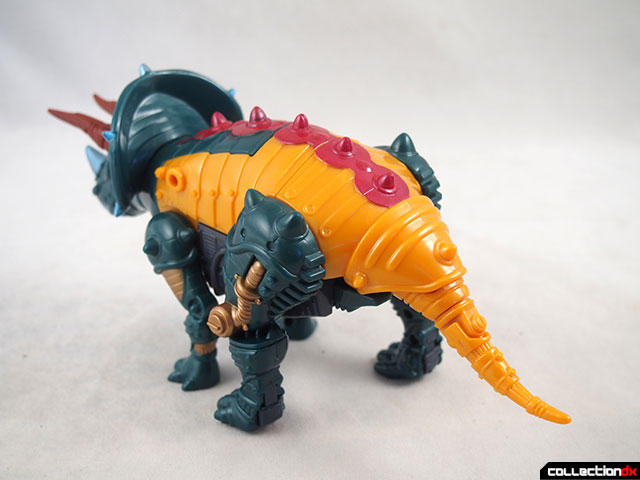 The cannon also connects in this mode. It's the same exact cannon, but still looks great.The wheels roll freely, the cannon spins, and a missile bank can unfold from the back. 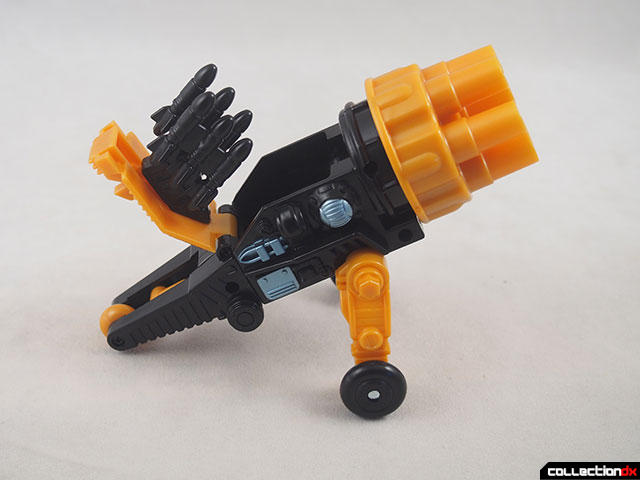 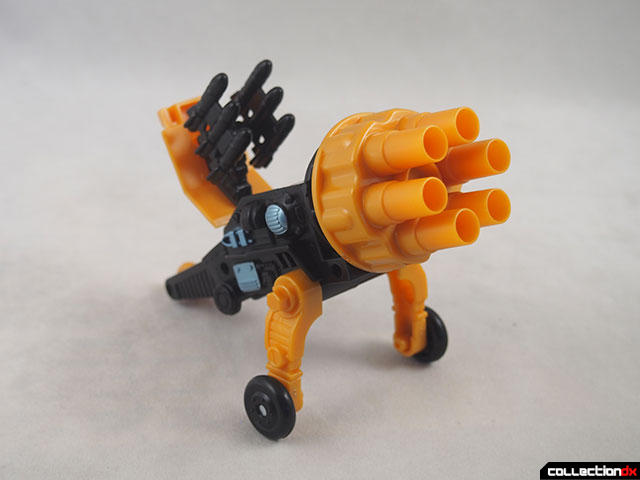 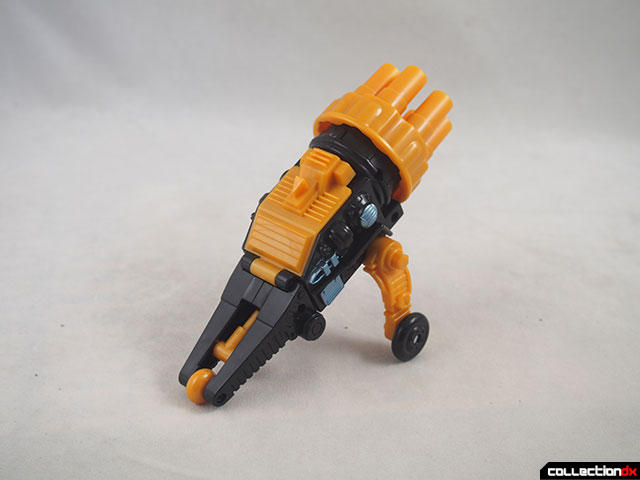 To mount the cannon, you clip the wheels to yet another set of connection points. It just looks so good together. 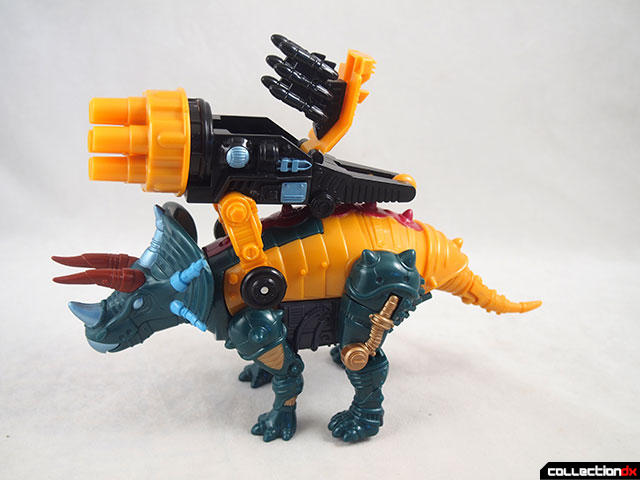 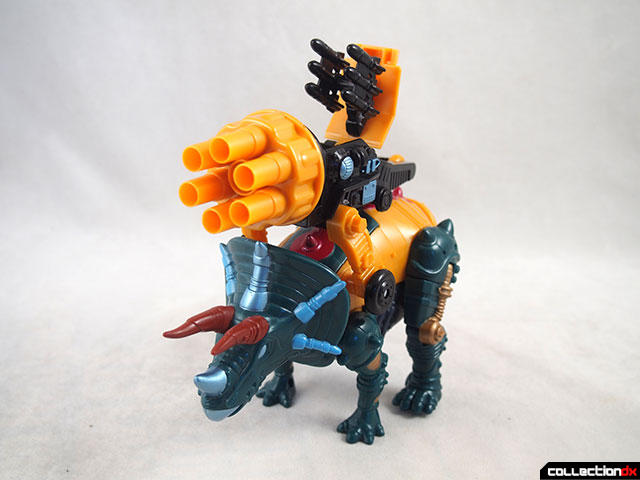 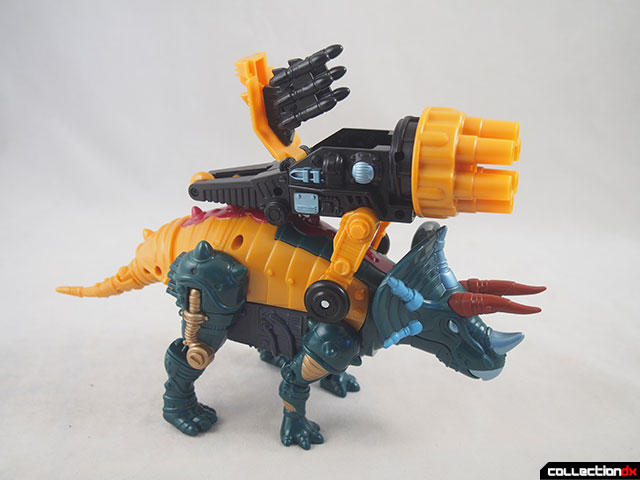 Keep an eye out for this line, there are a lot of great things going on here. They just need to work on stabilizing the robot mode a bit more.

That dino mode with the giant gatling gun on his back is great.

I know it's the old man in me, but I'm most struck by the fact that the amount of money required to purchase this "el cheapo" figure is the same amount that used to get you stuff like Transformers Animated deluxe class figures.