This is the companion piece to the Jet I get from Family Dollar. They had an after-Christmas sale, so I ended up getting both for $10, which is not a bad deal at all. I mean, for an impulse buy you can't go wrong.

The box is identical to the Jet. These guys don't even get unique names. 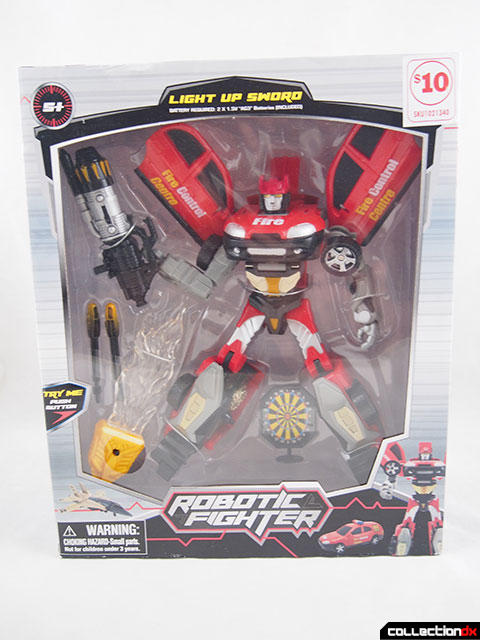 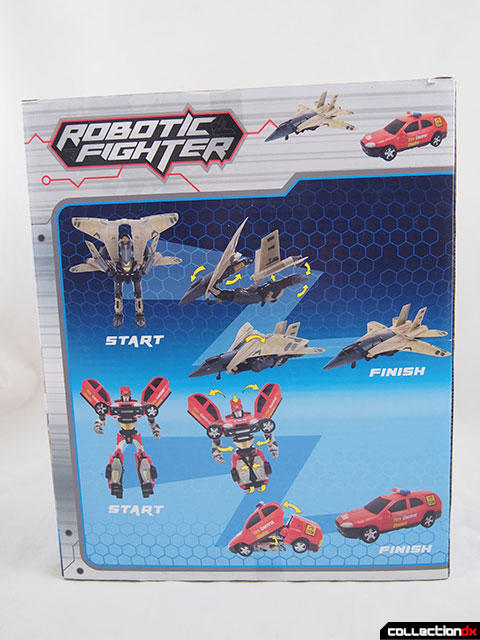 Here he is in all his robot mode glory. He's a bit derpy, and his proportions are off just enough to let you know this was not made by a seasoned design team. 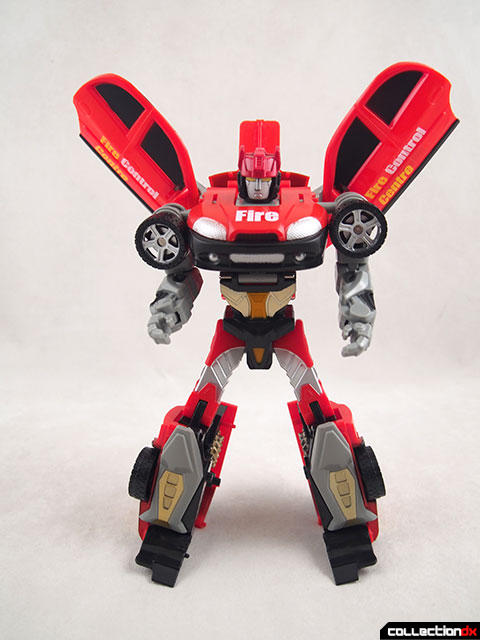 You can see here the main flaw in the figure, his droopy right arm. Can transformers have strokes? This one did. In reality it's just that the ball joint does not have enough friction to keep it in place. Easily fixed if you are so inclined. 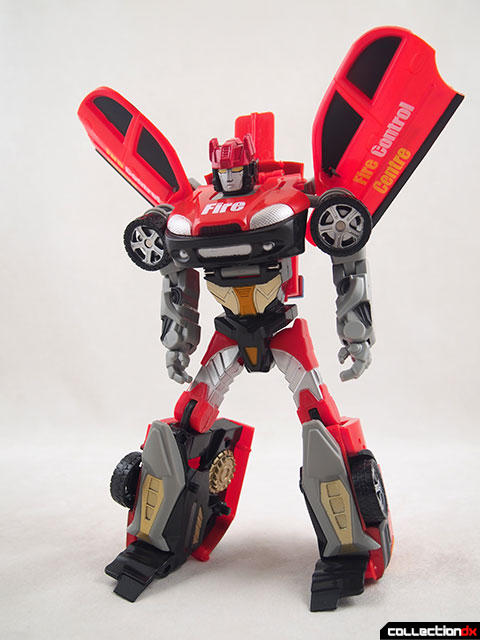 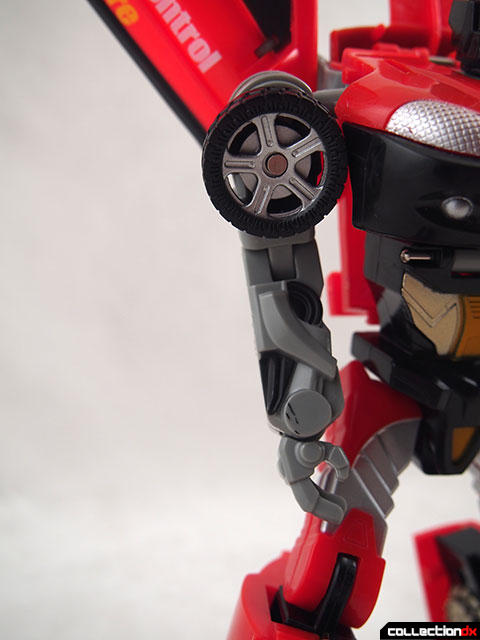 The head has a nice clean sculpt that would not seem out of place in the original transformers cartoon. It's got personality. 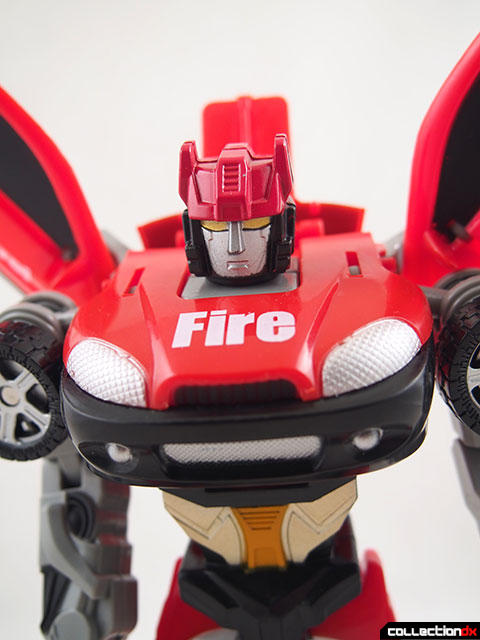 You can see the influence of the new transformer movie designs on these. Items like random spinny disc designs are added for no reason other than to look cool. I have to say though, this cheap-ass toy has less hollowed out parts than a real Hasbro Transformer. 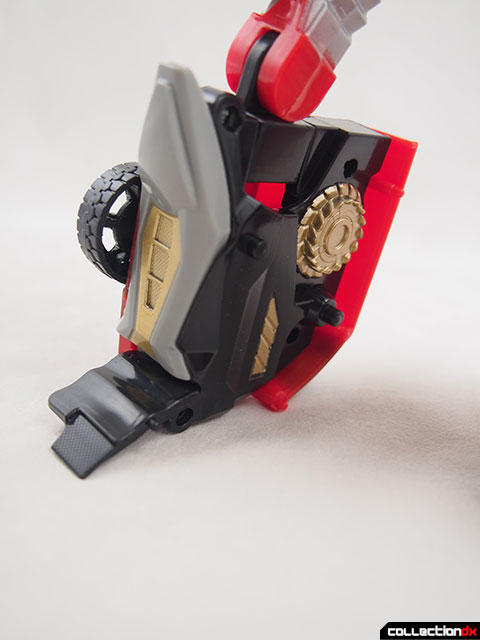 I mean look at the back. Minimal kibble, no hollow parts in the arms and legs, it's nice and clean all over. 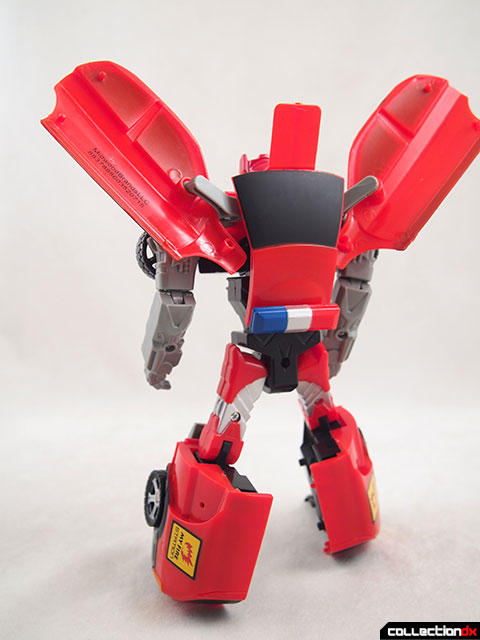 He can also move! Articulation is actually pretty sweet. 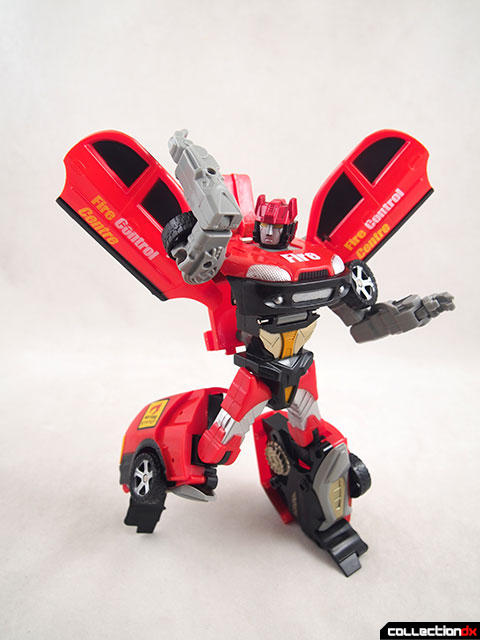 Like the Jet, he includes a sword and a gun. The sword is a light-up flaming sword, and the gun fires a missile. 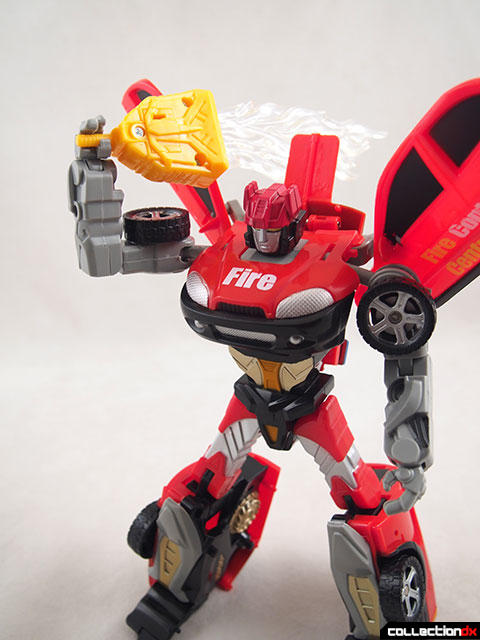 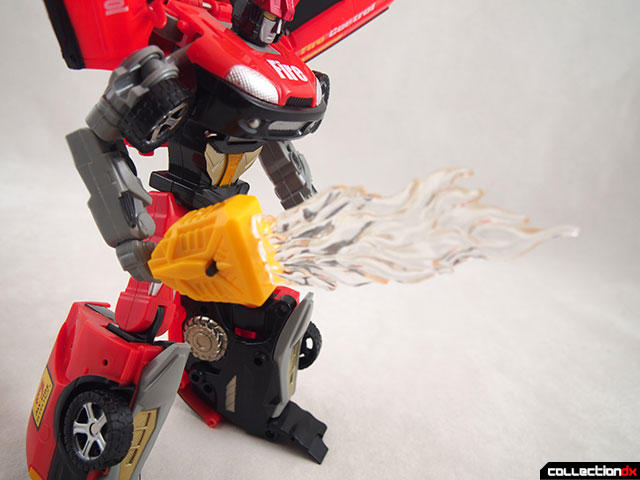 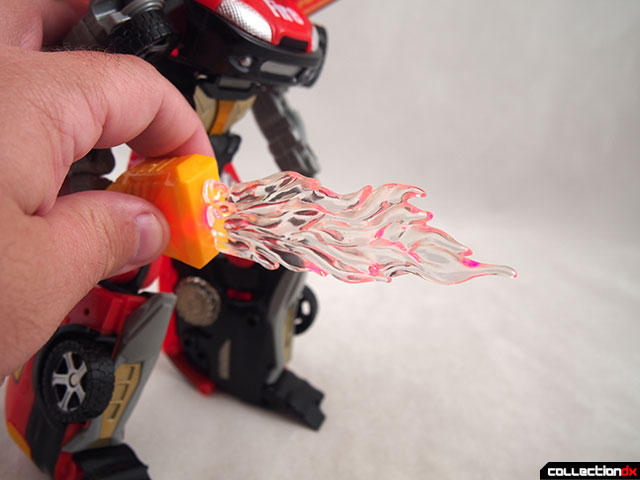 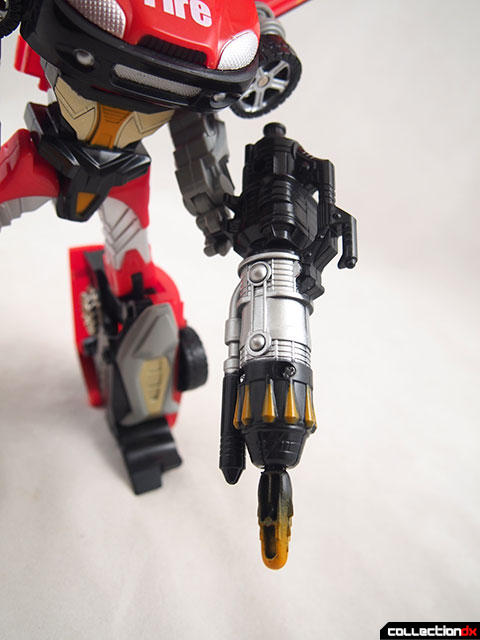 Transformation is simple and intuitive, with various tabs and pegs all over. 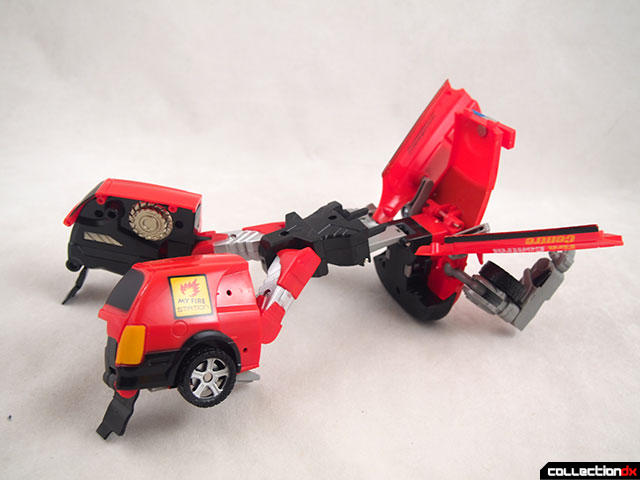 For example, there are tabs in the front to keep the shoulders in line for transformation. A nice touch. 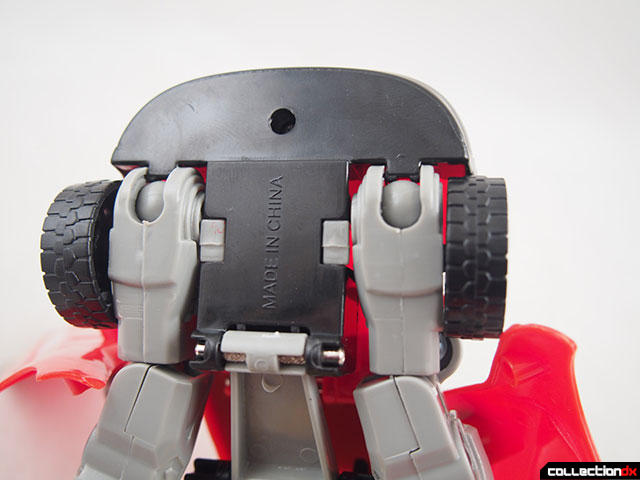 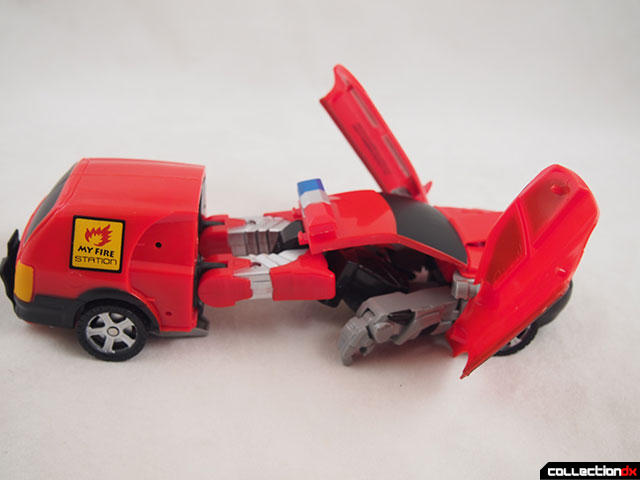 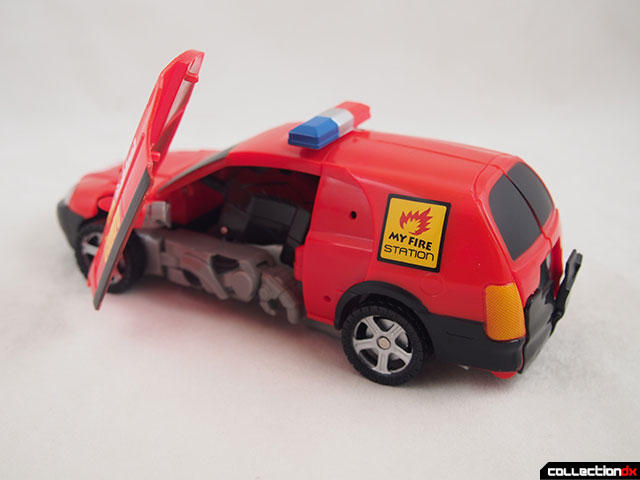 The graphics on the car are sharp. Notice the British spelling of "Centre", and the slightly out of alignment of "MY FIRE STATION" 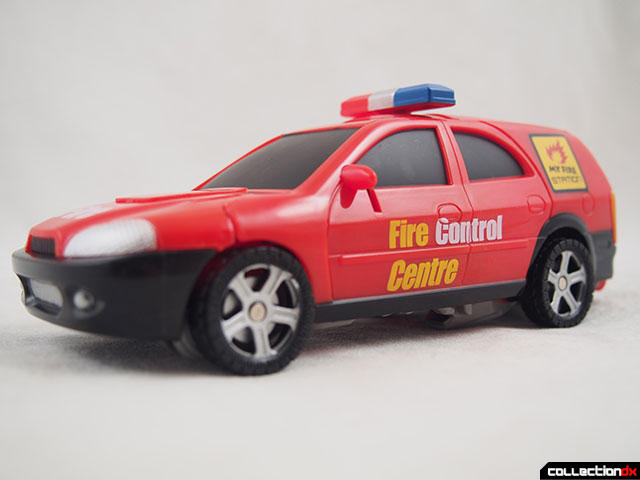 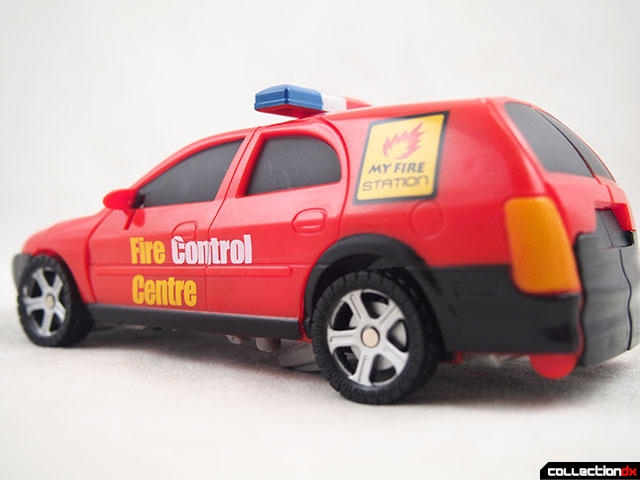 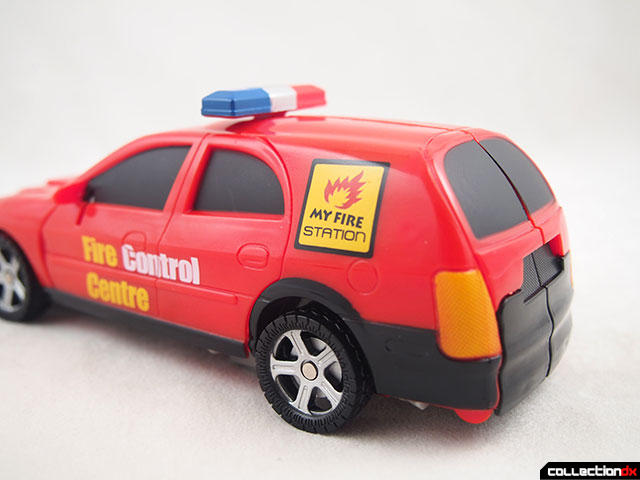 Again, comes with a dartboard-like target. 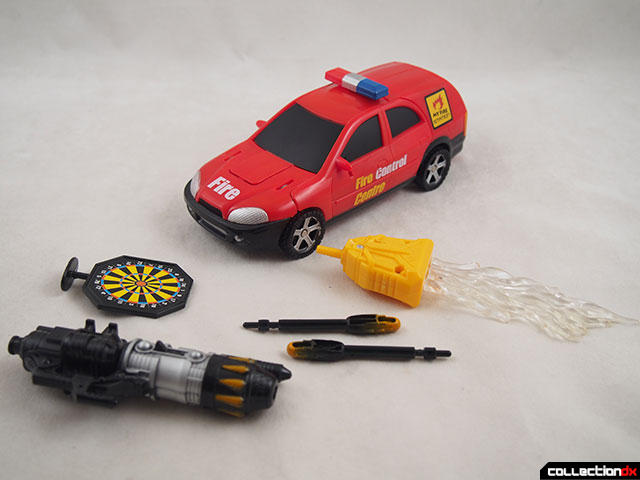 It's a pretty good toy all things considered. It's big, and easy to transform, and looks fine. The plastic is a bit cheap, and some of the joints are a bit floppy, but you get a light up sword, so there's that. 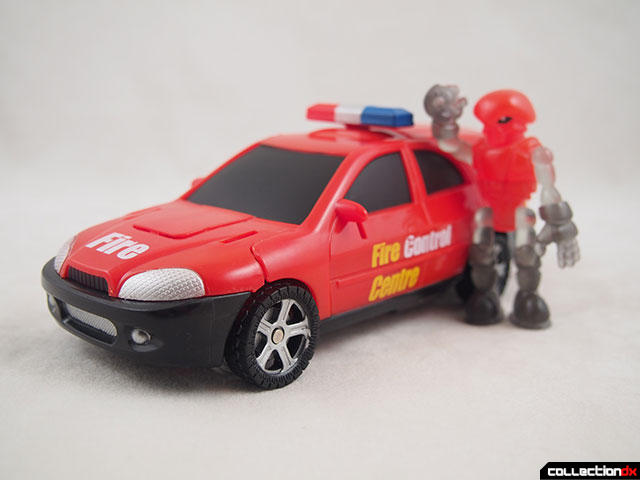 The gun looks like it belongs to movie Ironhide.