The second season of Aldnoah.Zero brought the drama, the tension, and even the battlefield to new heights. Our heroes of the United Forces of Earth took the fight into space, with Terran and Martian Kataphrakts clashing within the debris of a shattered Moon. 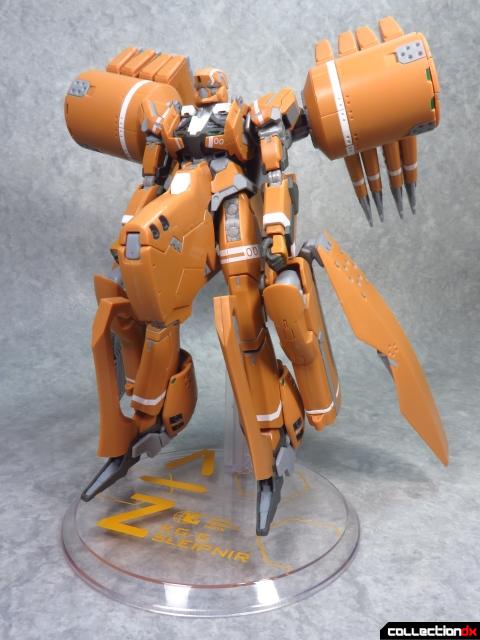 For their release of the Sleipnir Space Version, Megahouse did the logical thing and designed extra equipment around their existing figure. The toy comes with its huge leg boosters, boots, and codpiece already attached, which already make the figure feel quite weighty. 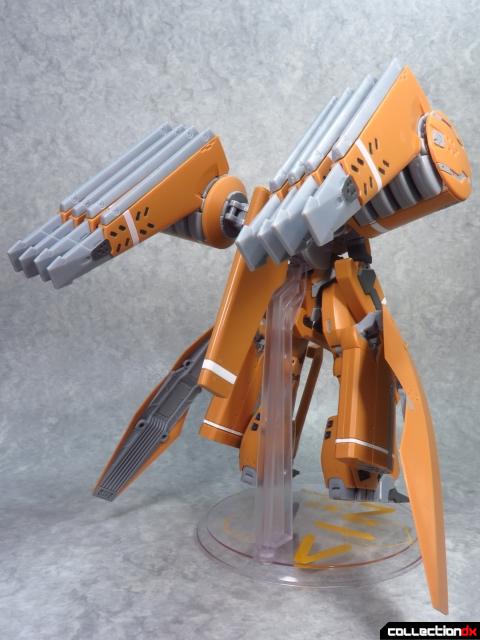 Once the hefty backpack is added, the display stand becomes essential. The KG-6 Space Version is a design that fully embraces the the trappings of zero-g mecha combat, which translates into a toy that cannot stand on its own. An included display base plugs into the backpack to keep the Sleipnir aloft. When fully equipped, the KG-6 is now roughly eight inches tall (and nearly as deep). 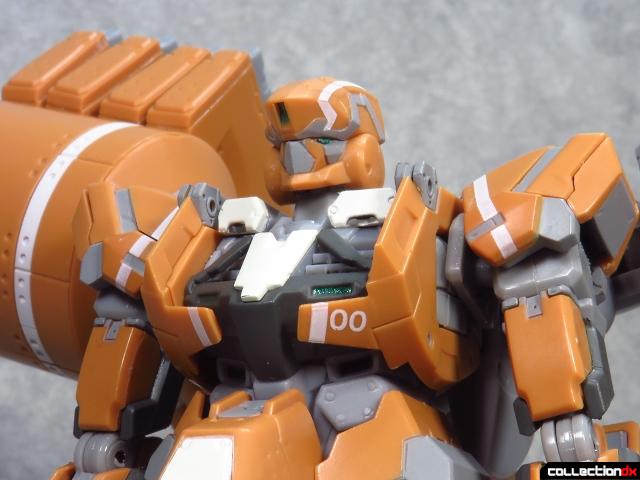 Megahouse didn't skimp on the details, with their Variable Action Sleipnir looking and feeling every bit as good as one of Bandai's Robot Damashii toys. This is especially true around the KG-6's layered vent assembly in its chest and the "double nuts" mark identifying this Kataphrakt as Inaho's Mustang-00. 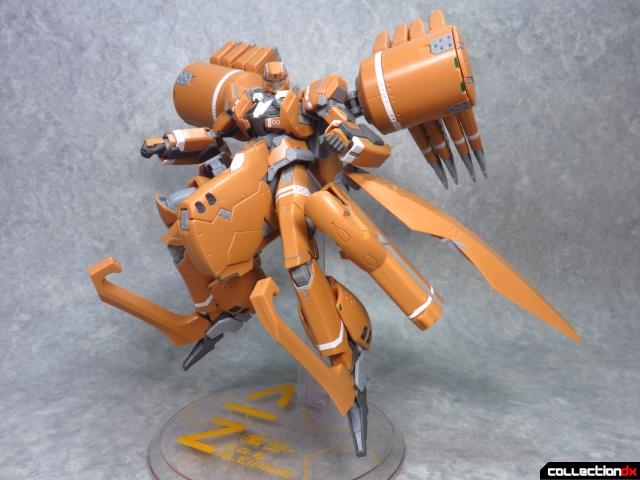 The Space Version retains nearly all the articulation of the base KG-6/KG-7 figure (please see my previous review for details), and adds a few more movable bits like the armored flaps on its leg boosters. 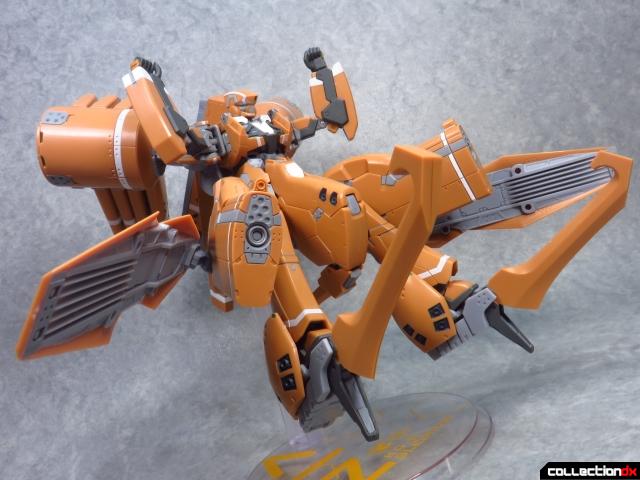 There's also a trio of hooks that can be deployed from the feet and codpiece. In the series, the Terran Kataphrakts used these hooks to both land on their space carriers and quickly change direction in conjunction with their own wire-guided anchors. 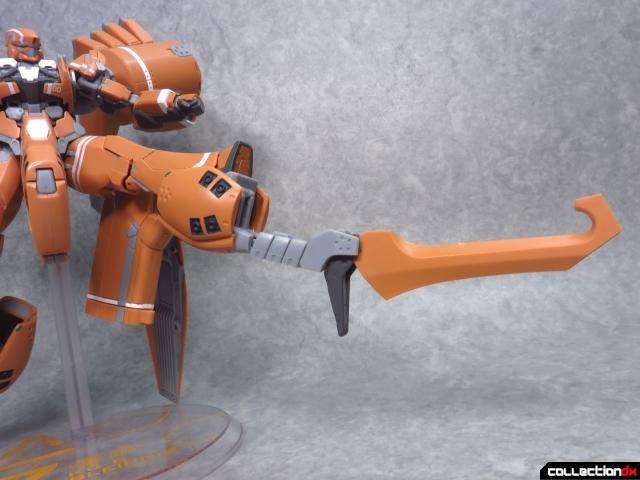 The bottom of each space boot even features an extra hinge to let the hook portion unfurl even further. 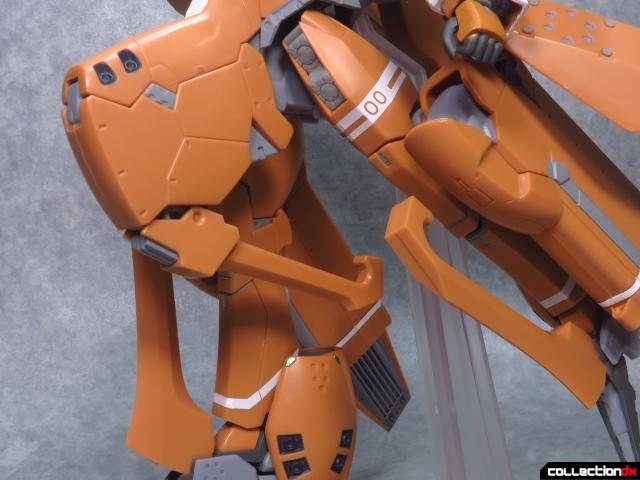 Strangely, the KG-6 features only a halfway implementation of the "happy to see you" arresting gear that is included on the KG-7 Space Version. No full on ro-boners for the Sleipnir. 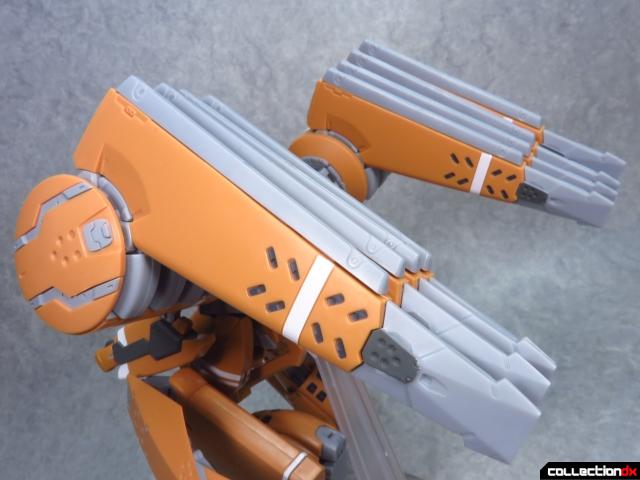 While the fold out hooks are neat, the true main event of the Space Kataphrakt's gimmicks lies within the backpack. The reason it is so heavy is because it contains eight fully articulated grappling hooks. 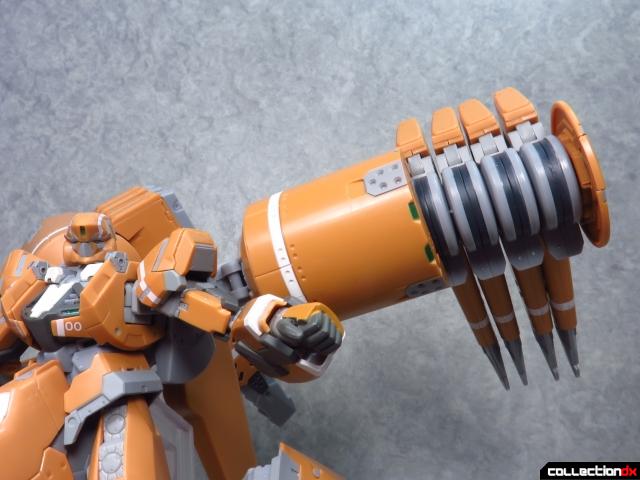 Each cylinder can slide outward... 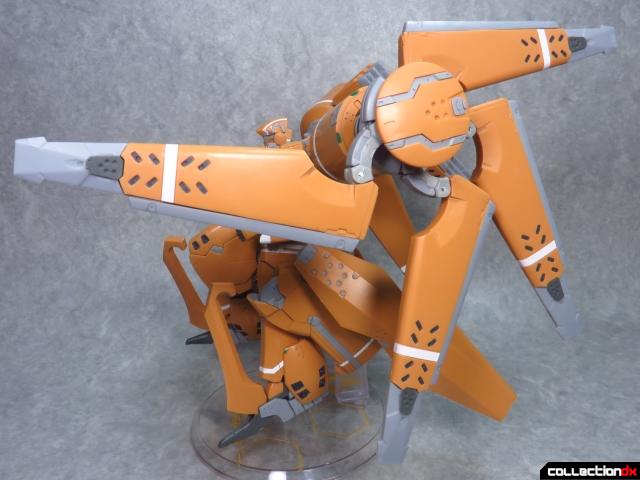 ...which allows each individual unit to rotate around the main shaft within each cylinder. Also, each grappling hook can extend on its own arch-shaped armature for even more flexibility. This whole setup is both incredibly engineered and visually impressive. 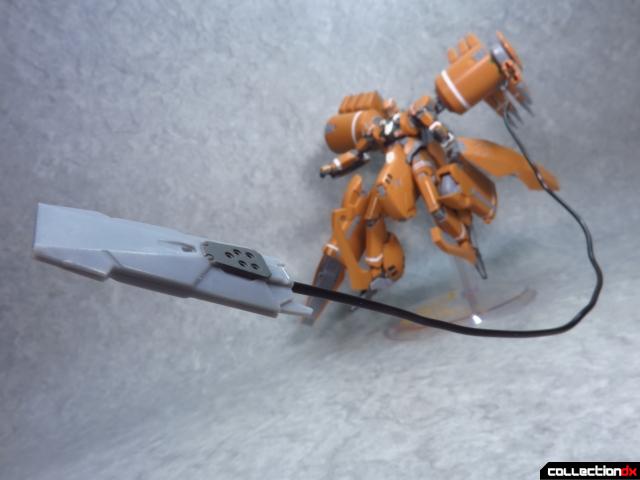 Included with the toy are two pieces of black wire that are about a foot in length. You can remove any of the eight gray anchor tips and use the wire to recreate scenes of Terran Kataphrakts grappling nearby space debris for extra maneuverability. 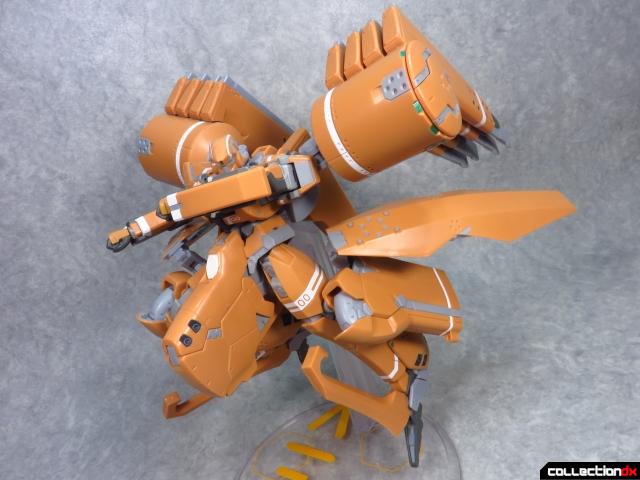 With a solid action figure at its core, the Sleipnir Space Version does a pretty good job handling the extra weight of the added gear. However, I do wish the figure came with a poseable display stand, as the fixed arm it is packed with limits how you can orient the toy. Space combat always looks better when it's a bit more "three-dimensional", ya know? 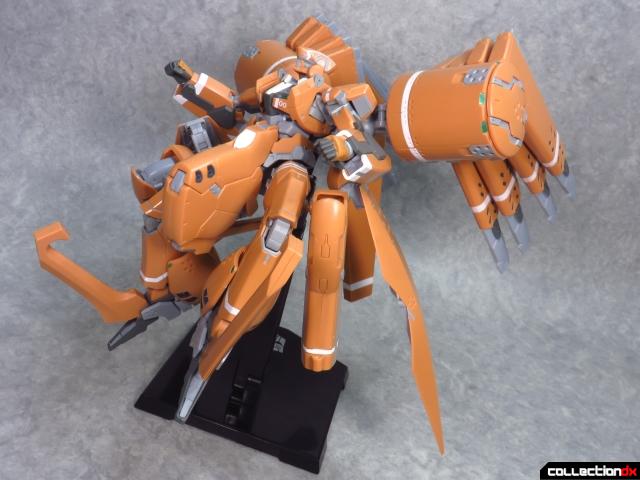 Thankfully, this figure uses the same peg size as other popular display stands (like a Tamashii Stage), so it is possible to swap in the armature of your choosing. Just make sure you use a stand that can bear the weight. Something with a good solid base and a ratcheting joint in the armature works well, such as TakaraTomy's Transformers branded stand. 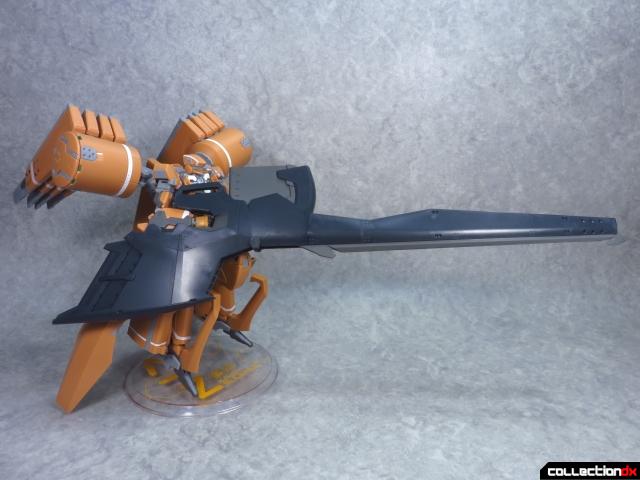 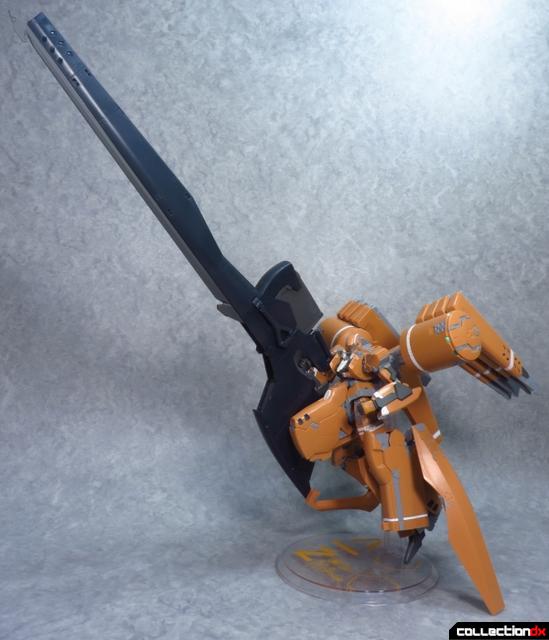 This gun is almost larger than the robot that wields it, and is difficult for the toy to wield without extra support. 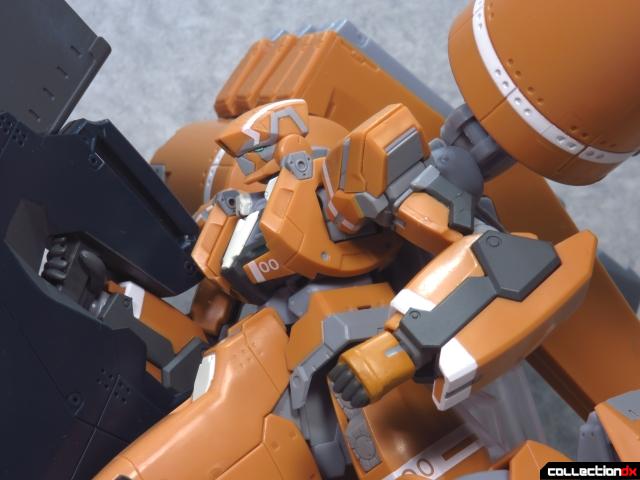 A pair of grasping hands let the Sleipnir hold onto the rifle, although you'll quickly find that what really does the lifting is the way the robot's forearm slots into the main body of the weapon. 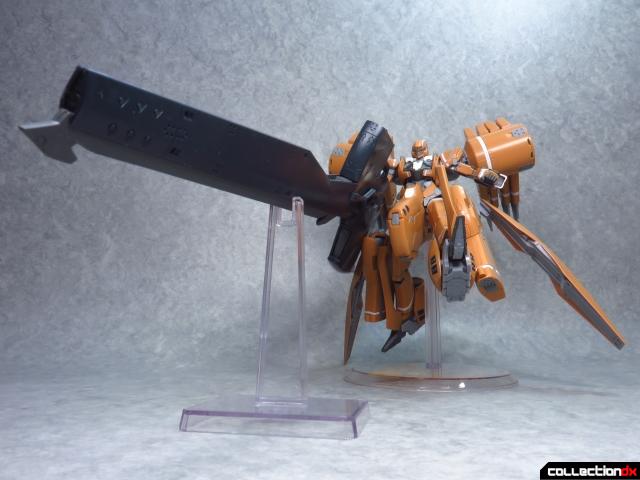 An extra support column helps take some of the weight off of the toy's woefully unprepared arm joints, so you can safely display the Sleipnir with its main weapon. 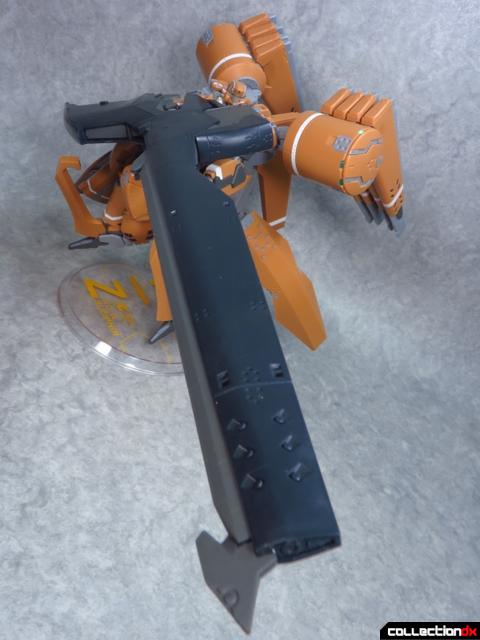 While it is possible to have the toy hold the rifle by itself, the arm joints simply cannot keep the weapon upright and you end up just resting it on other parts of the KG-6.

And unfortunately, the Variable Action Sleipnir Space Version does not include that sweet giant robot sword that Inaho used in the show. I would have much preferred to have the option to display the toy with a weapon that isn't as cumbersome as the recoilless rifle, but I might have to make do with borrowing gear from my Areion figure. 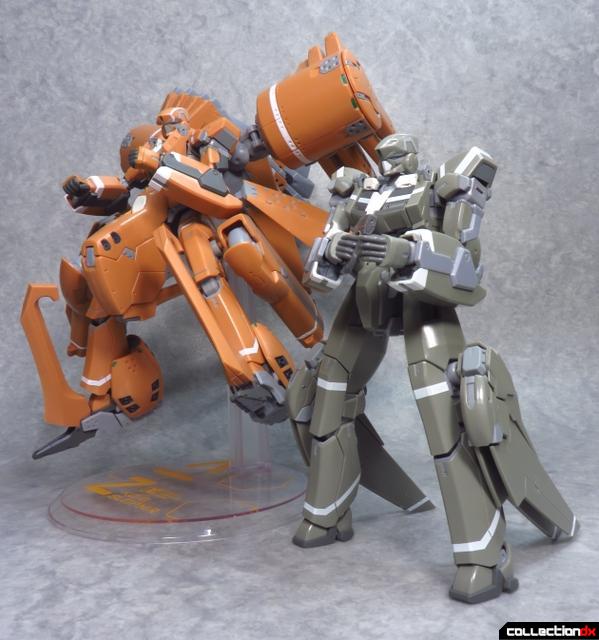 Putting the two good guy Kataphrakt figures next to each other really shows how the space equipment turns the humble soldier robot into a high-flying dreadnought. Aldnoah.Zero's mechanical designer, I-IV (Eye Four), was definitely channeling some Gundam Sentinel into this show's giant robots, as both types of Kataphrakt manage to look both really cool and functional at the same time. 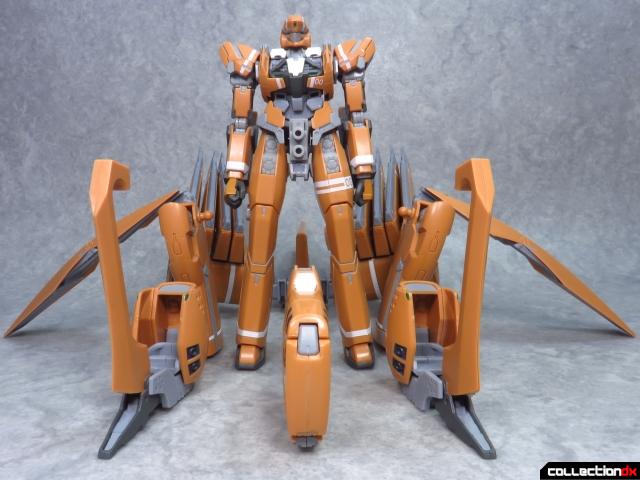 With this toy, it is possible to strip off the space equipment and get an almost complete Sleipnir figure. 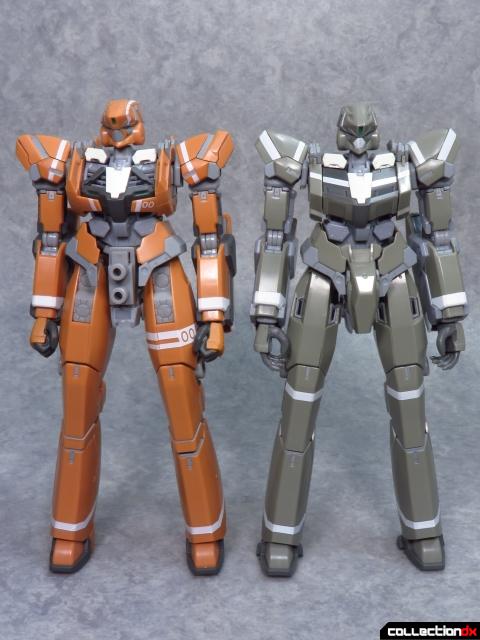 At first glance, it seems like Megahouse could have conceivably included parts to outfit the inner KG-6 for ground use (like a Gundam FIX Figuration), but upon closer inspection a few key bits were remolded for the Space Version. First off, the groin area has been (ahem) beefed up to accept the new larger codpiece. 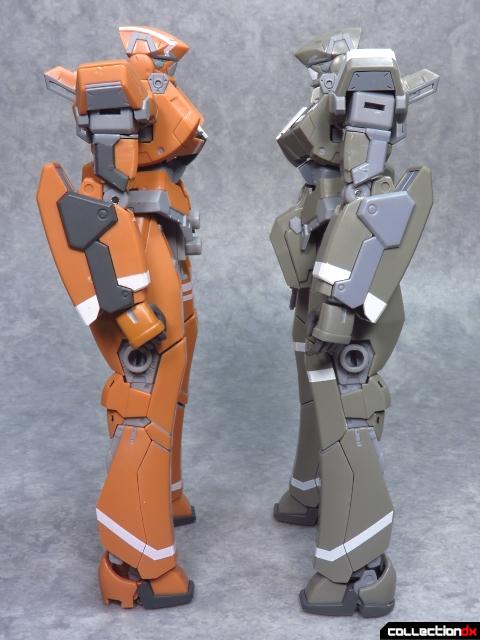 This Sleipnir is also missing its heel pieces, so it can connect to its big zero-g boots. 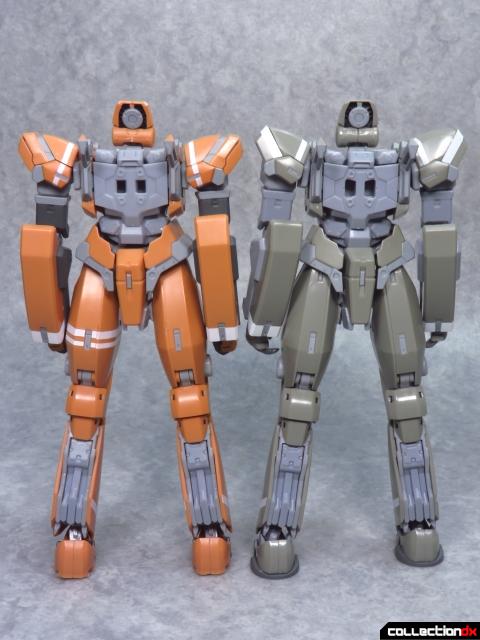 And if we take a closer look at the back of each Kataphrakt... 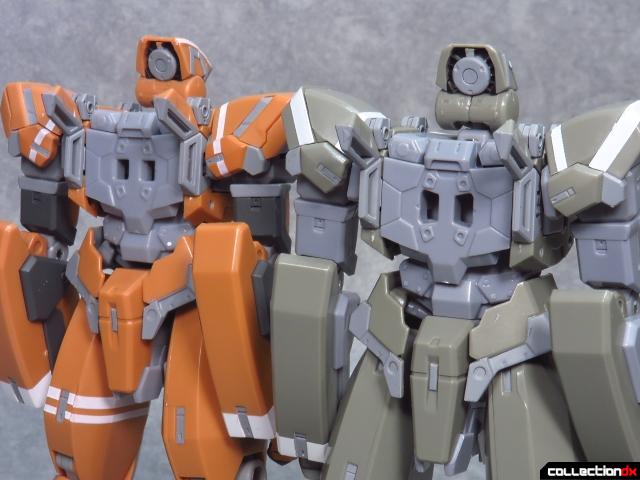 You may notice that the holes for attaching each figure's respective backpack are in fact shaped differently. The ground type Areion (right) has slightly larger trapezoid-shaped holes, while the space type Sleipnir (left) has smaller squared off holes. This piece makes up for a large chunk of the figure's upper body, so the toy would have to be engineered with swapping parts in mind to make an equipment exchange work. I can understand why Megahouse altered the connection point, as the Space Version's humongous backpack needs to lock in solidly while the ground pounder's smaller rucksack can get away with plugging in a bit more loosely. 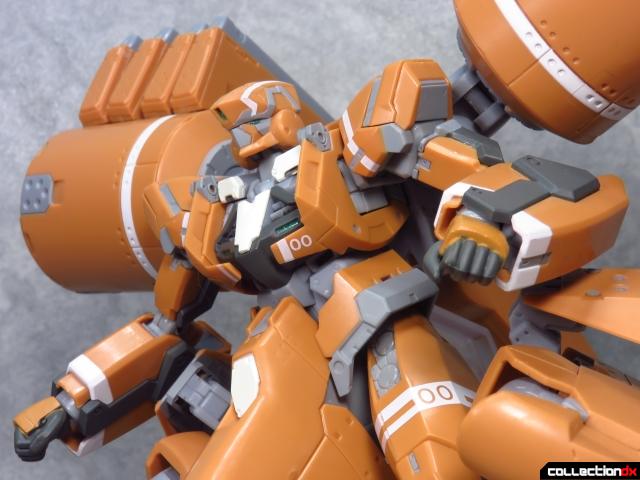 The Variable Action KG-6 Sleipnir Space Version makes for an impressive piece that, like its gray-colored cousin, is basically a Robot Damashii figure in all but name. This particular type of giant robot design, where the inner machine is charging through space with huge boosters and chunky legs, has always been fascinating to me. As a child, I built the old (pre-HGUC) S Gundam Booster Unit kit and was intrigued by such a weird looking mecha. Getting to see that idea used in a non-Gundam anime definitely piqued my interest. Overall, this chunky armored up KG-6 figure mostly hits on what I expect from a figure of a space combat robot. It's big, beefy, and a little awkward, but for the most part the toy delivers in terms of looks, feel, and sheer presence. Being part of Megahouse's "off-brand" action figures does mean the figure comes with a higher price than an equivalent Robot Damashii, which aims this release more at hardcore mecha nerds than casual fans. Still, I would recommend this figure for fans of Aldnoah.Zero, or those who really like this style of mecha.

Unfortunately, I have to end this review on a down note. Originally I wanted to have this review out shortly after I received the figure. Over the course of putting my review together I noticed that one of the Sleipnir's swing-out shoulder joints was fused in place. Tried as I might, the darn thing wouldn't budge and eventually the armtwisted off. I'm not sure if this is a common problem with this figure, or if I just happened to get a bad one. But it's a real shame that this happened, because otherwise I feel the toy is worthy of the high marks I'm giving it. At some point I'll probably end up 3D printing a replacement part and fixing the toy, but for now the arm stays in place if I wedge it back into the shoulder cavity. Again, I don't think this is a widespread issue, as my Areion was perfectly fine, but please be aware of the possibility. They say you can't make an omelette without breaking a few eggs, but I don't think they had Inaho's giant robot in mind with that phrase...