Frame Arms Girl is a line of model kits based on Kotobukiya’s original model kit line known as Frame Arms. I would recommend checking out their introductory video on the topic for a quick explanation.

Thanks to Kotobukiya I’m taking a look at one of their latest releases: Jinrai Indigo version!

This is actually my second Frame Arms Girl kit. My first was Gourai which I very much enjoyed. I have been told my quite a few of my friends that they have only improved with each release, so I’m eager to see how the final product turns out.

Inside of the box you get a massive whack of runners.  Because this does share a few runners with Gourai, a few extra parts will be left over when you are done.

I spent a pleasant day working on by Jinrai slowly while catching up on some anime and drinking a beer or two. The process requires no glue, and everything fits together quite nicely. Kotobukiya plastic is very tough, and cleans up very well using just a pair of nippers and a hobby knife. 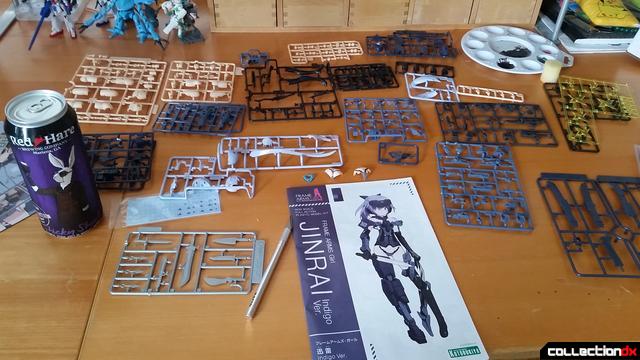 There’s also a small sheet of water slide decals. I haven’t quite decided how I want to use them just yet. 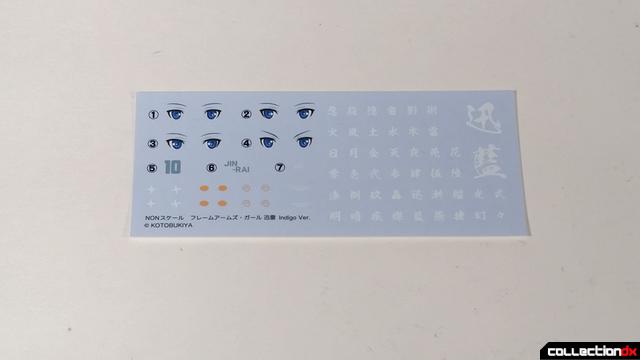 After a few hours, Jinrai was complete! 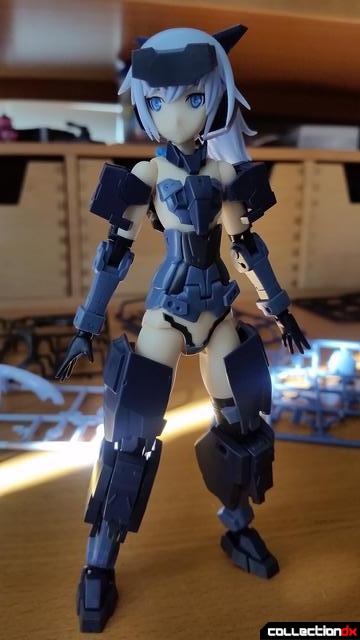 So let’s get onto the kit itself. In a nutshell, Jinrai is a tank-ninja-robot-girl. Everything about that sentence is great. 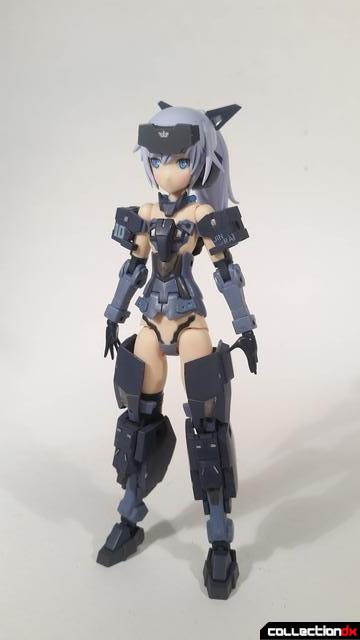 The sculpting is clean and well thought out. It’s a pleasant blend of sharp geometric angles with the mechanical parts, and the rounded organic features of Jinrai herself. 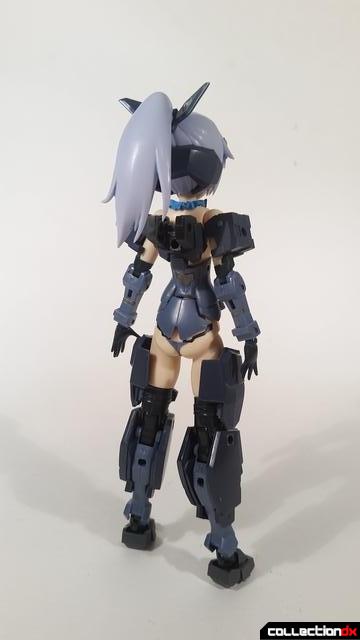 Although I am glad that Jinrai does not have an exposing skirt such as previous releases, I think we can all agree she could use some pants. A decent pair of pants. 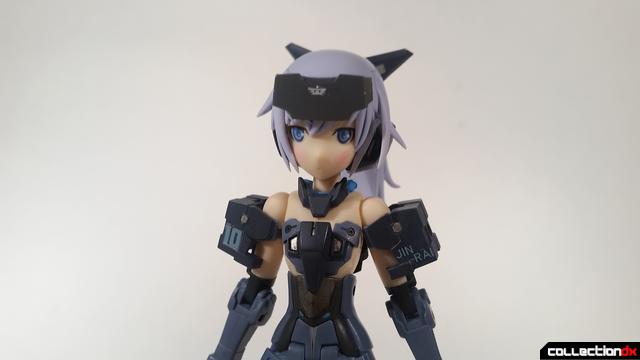 One thing that really surprised me when I built Gourai was just how good and robust much of the articulation was. Jinrai only improves on that by having improved hips which allow for a wider range of motion. 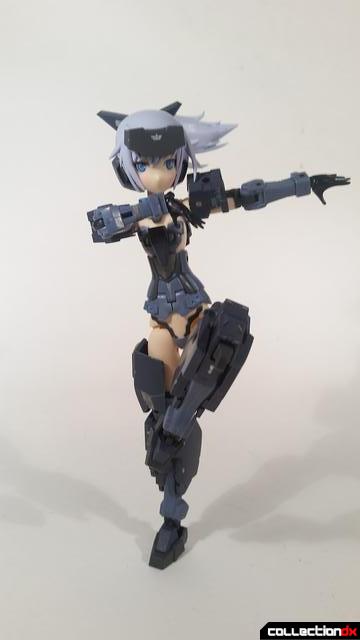 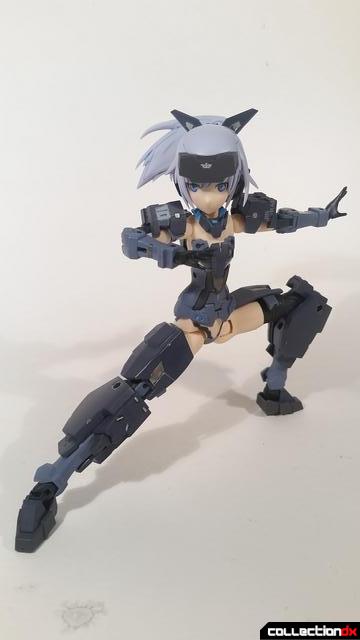 Also Kotobukiya was nice enough to include an extra set of joints for earlier releases as well. The first few releases used a softer PVC plastic for a lot of the joints which wound up leaning to looser joints over time. A set made of ABS is included to help upgrade your previous Frame Arms Girls releases.

Jinrai features swappable faces just like the previous Frame Arms Girl releases. She has a calm face, a looking left face, a looking right face, and an open mouth yelling face. Each one swaps on and off easily by removing the front hair piece. If you’ve done this before on a figma or Figuart, you know what you expect. 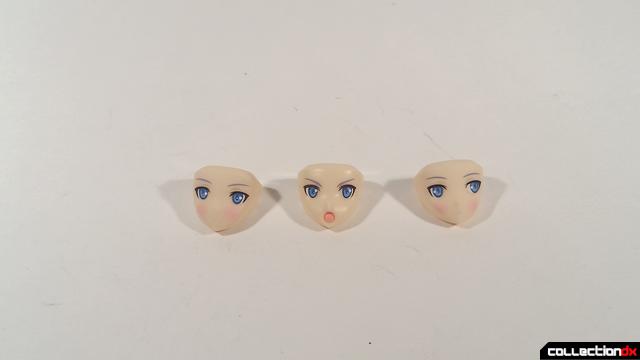 There are also few swappable hands as well. Earlier releases had simple ball jointed hands. However Jinrai features small swivel hinges that the hands peg into for a wider range of motion. They work effectively and are easy to swap. 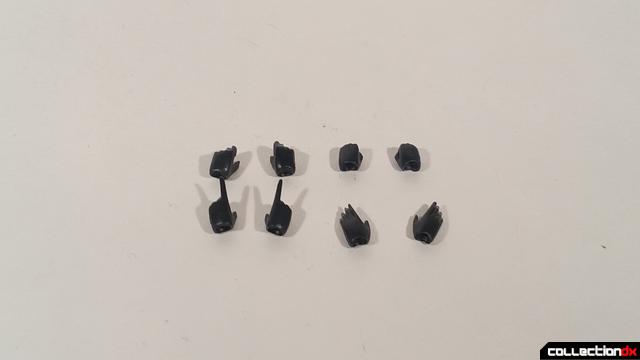 There’s also an alternate left arm and leg that you can swap out. This lets you recreate the pose on the box and in the original art. 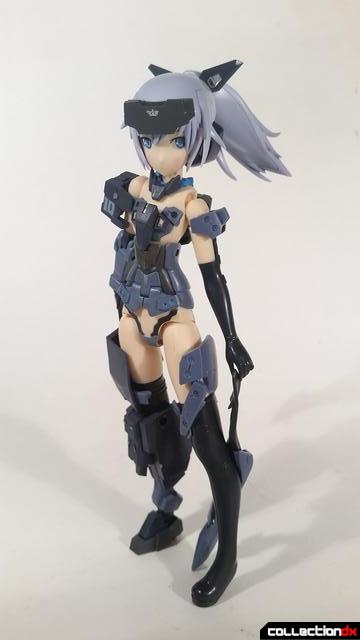 Now, there are actually two versions of Jinrai available right now. The first release is a red one, which features slightly different weapons. This version includes a new shorter pony tail along with a cute mechanical ribbon. You also get the longer pony tail as an alternate display option. 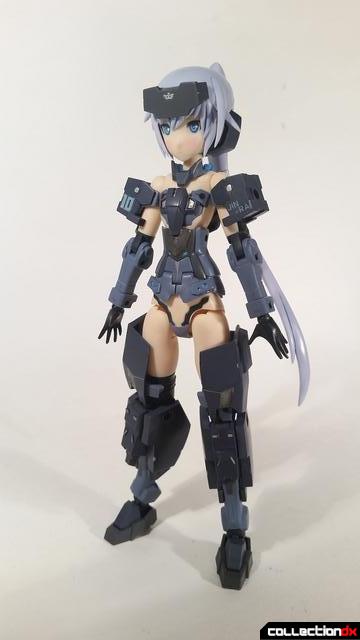 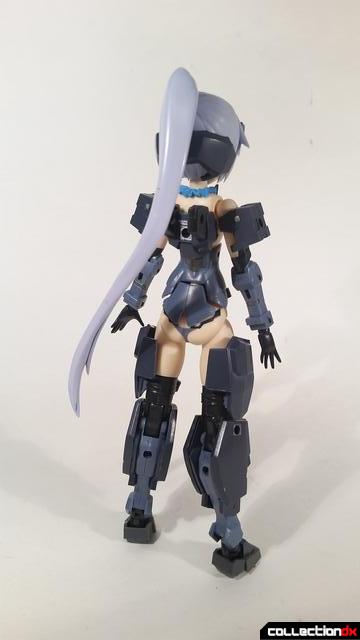 And of course, Jinrai has a plethora of weapons to use! She includes a mini tank turret that can be mounted to her back, forearm, or any of the other 3mm ports on her armor. 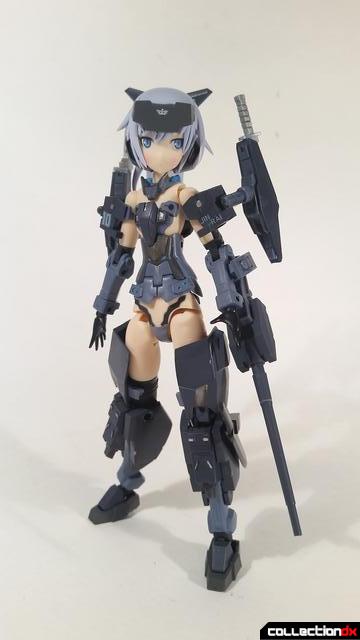 She also includes quite a few different swords and blades including a large katana, and this giant machete which features a secondary blade inside of it. Her two shoulder pylons can hold two of her smaller swords for a very cool fully weaponized look. 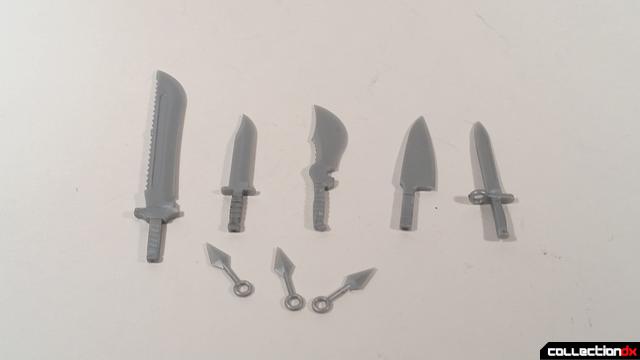 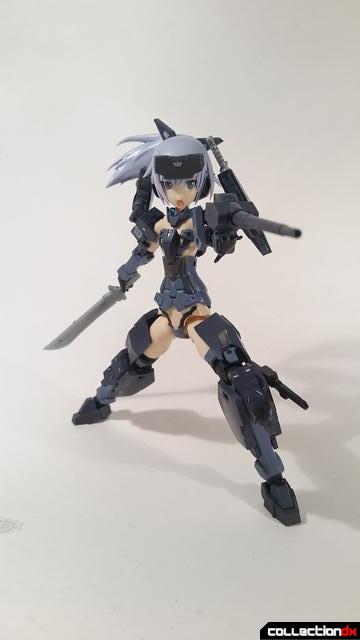 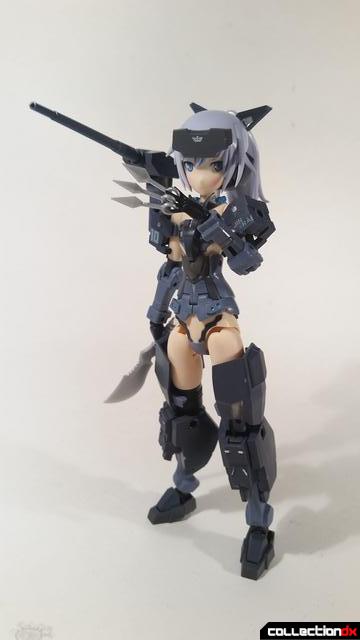 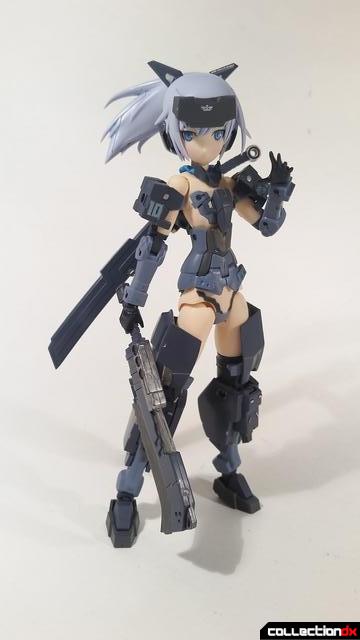 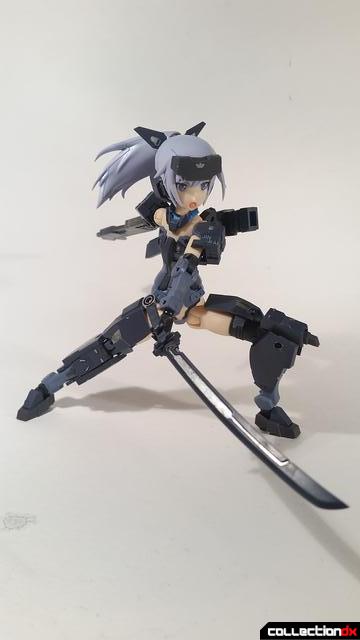 And if you doubted for a moment that Jinrai was a ninja, she comes with two unique runners of ninja stars. One is cast in grey, and the other in a lovely clear yellow. 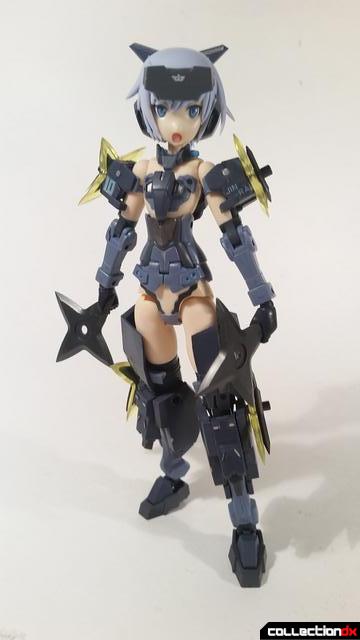 Each ninja star has a 3mm port in its center, so you can peg them all over her and onto her weapons and just customize the figure in all sorts of fun ways. 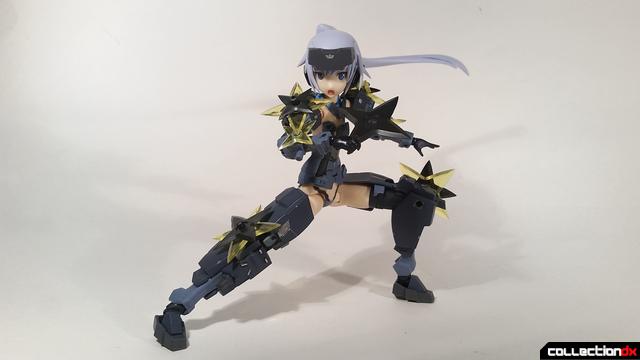 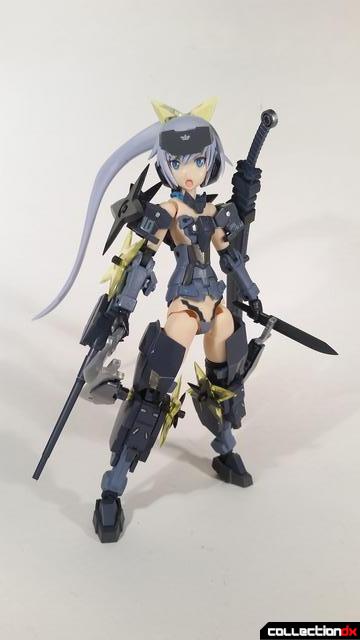 Speaking of customizing, I’ve done just a few tiny touches to my Jinrai so far. I added a bit of flesh weathering to her cheeks to give her a bit of blush. I also painted some extra metallic details and light grey panel lining to help make her pop. 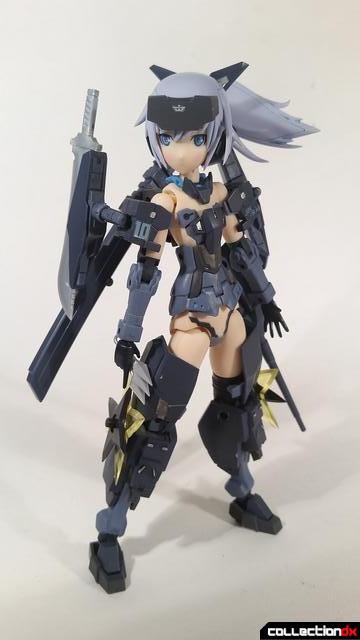 Here she is next to my first Frame Arms Girl, Gourai for comparison. 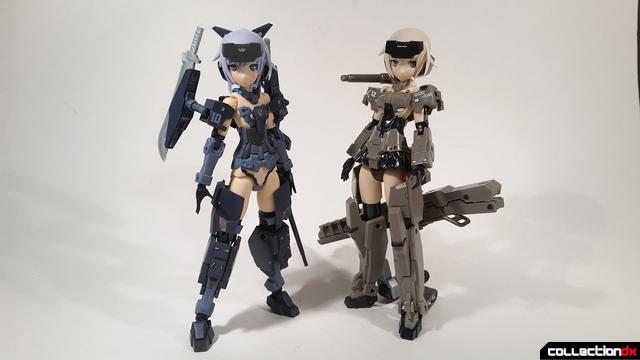 Building and painting Jinrai was a lovely and fun time. And the end result is a very sturdy well-made model kit that makes a fantastic desk toy. And all of the 3mm pegs and ports allow for a wide range of customizing fun to make each figure into its own unique piece. Frame Arms Girl has turned into a perfect complimentary line to the Frame Arms line, and I think even people who just think the designs are cool or cute will be able to build and enjoy Jinrai. It’s a perfect starting point for newcomers, and a welcome improvement to previous fans. 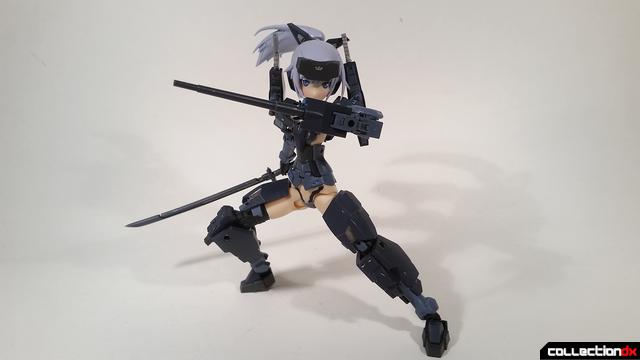 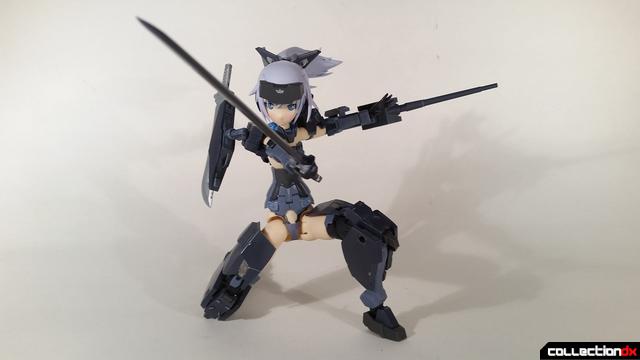 Thanks again to Kotobukiya for sending us this kit to review! Be sure to check them out.

nice job completing the kit and making it look so sharp! also, Grundy want pants too