Jermoe is a character from the children's animated television show "Super Wings" which currently airs on Sprout in the US. In Korea, the show is known as Go! Super Wings (출동슈퍼윙스). Jerome's name is the same in both the English and Korean version.

Jerome is meant to be a stunt jet, so naturally he is modeled after the blue and gold F-18 that is the signature craft of the Blue Angels acrobatic stunt team. I don't know if Koreans are familiar with the Blue Angels, but considering the considerable US military presence there, I would not be surprised.

The toy costs about $10 USD and is a bargain. The toy is top-notch in terms of quality and design. It appears to be identical to the Korean release. Both versions are made by Korean toy maker Auldey.

Jerome comes attached to a hybrid card / box thing, and requires straps to be cut to free the figure. Often the arms may pop off during this removal process, but they pop right back on. 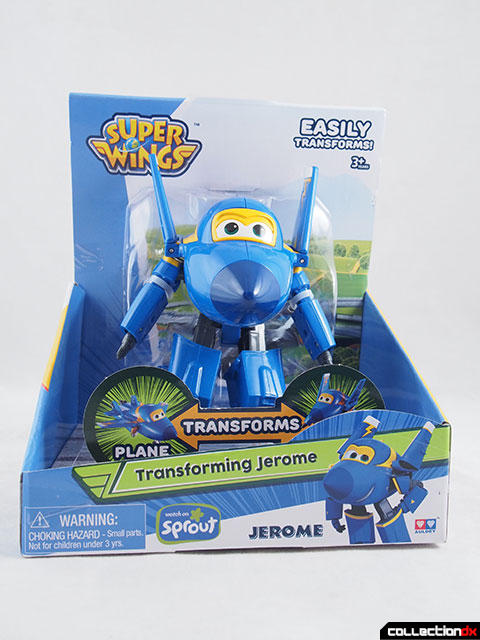 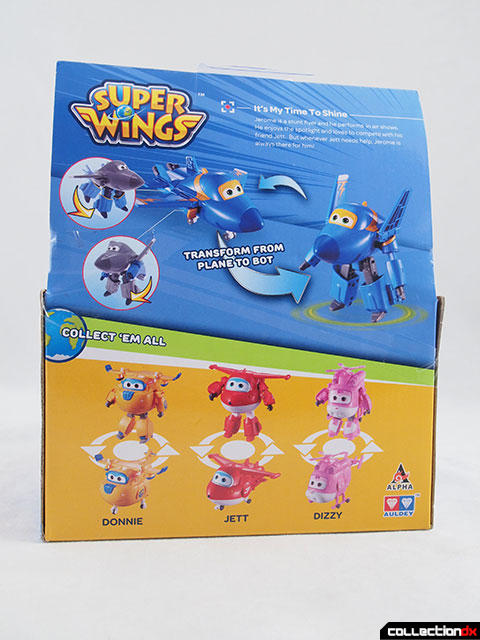 The robot mode is actually pretty great, much better looking that Jett. Having the wings fold up makes a huge difference. 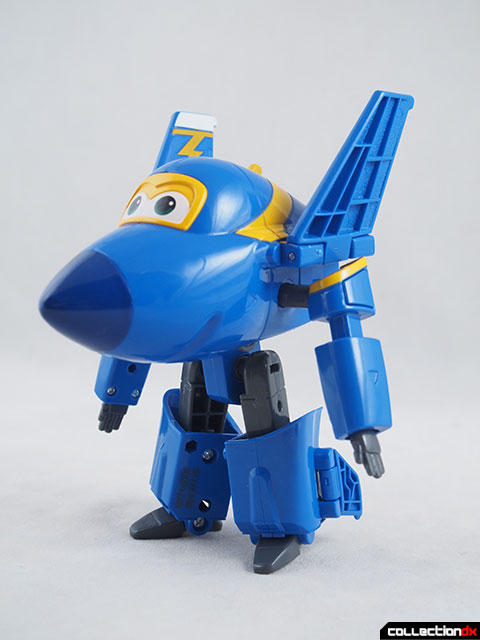 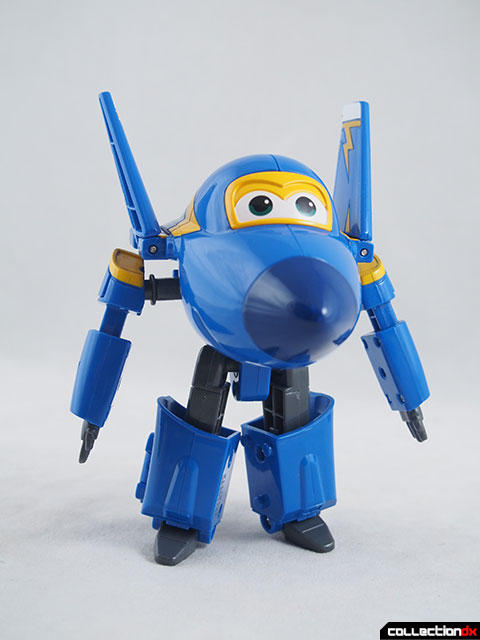 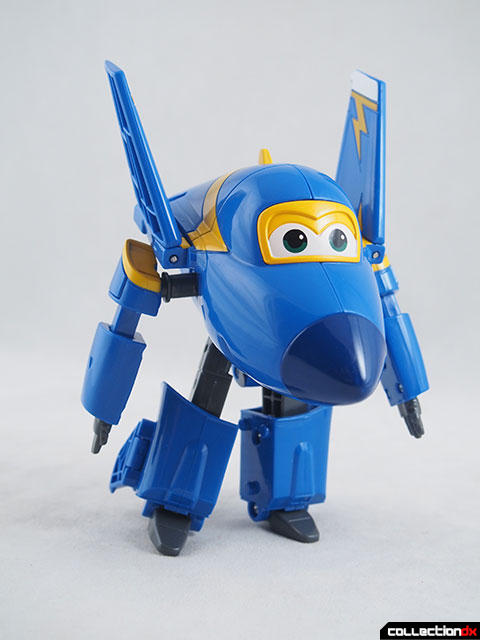 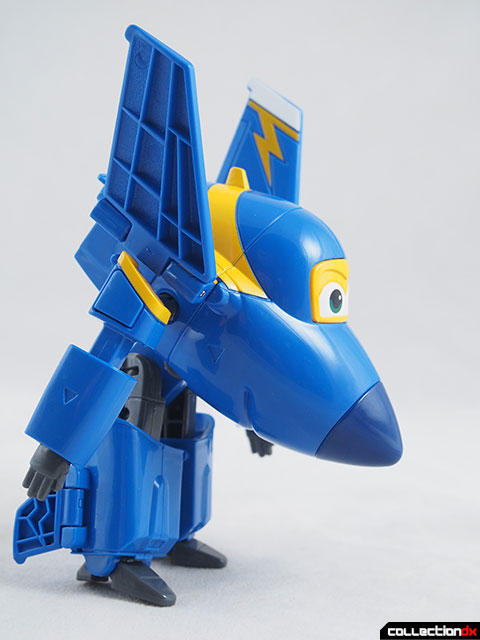 Articulation is limited to ball joints in the arms and legs. He still manages to be pretty expressive. 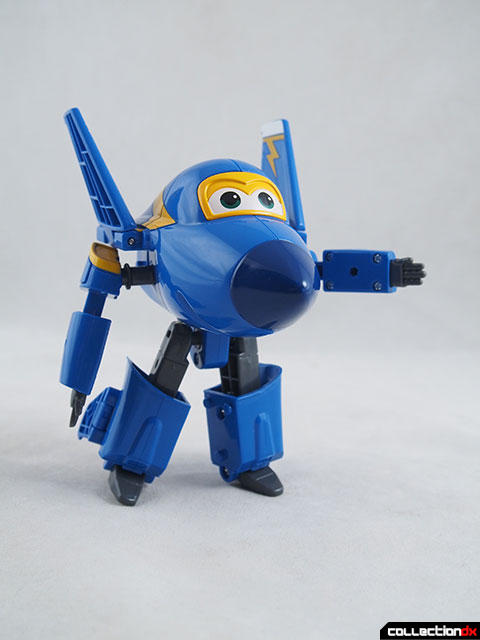 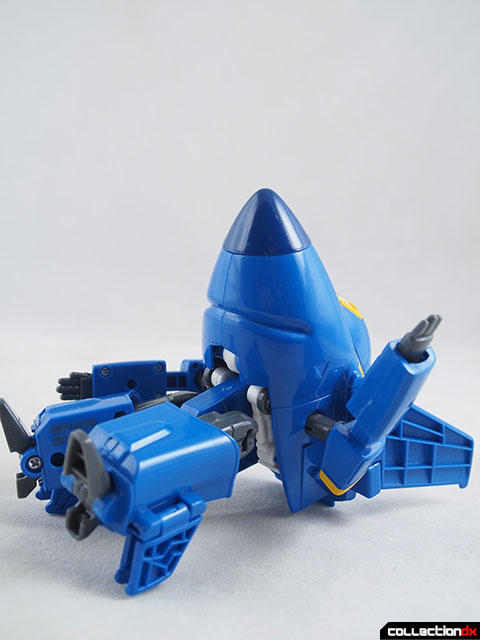 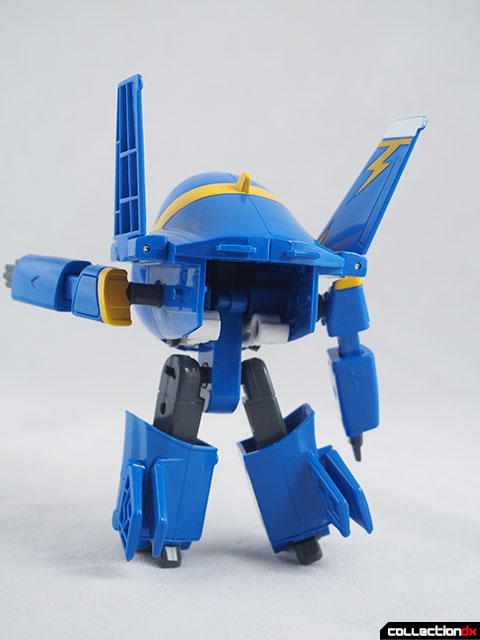 The toy is advertised as having a simple transformation, but it's not as intuitive as you might think. The hands need to be in a certain position, the legs need to clip in a certain way, and even the landing gear pops out only in a certain way. Watch the video:

Jet mode is solid but like I said it can be a little finnicky to get it into the mode. Also you need to have the legs in a certain position before you can get the landing gear out. Read the instructions, they are hidden in the bottom of the box. 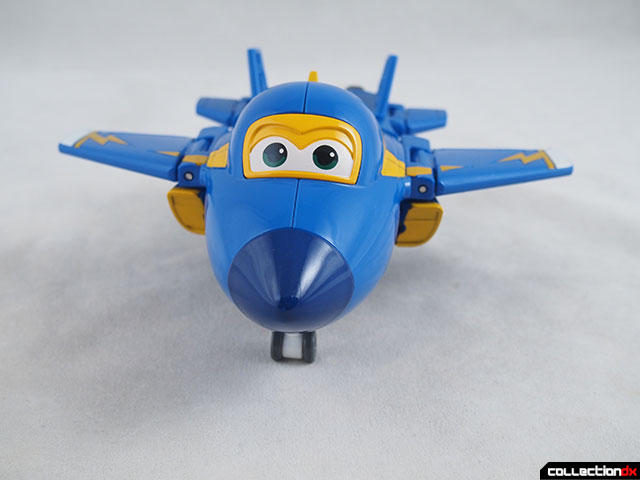 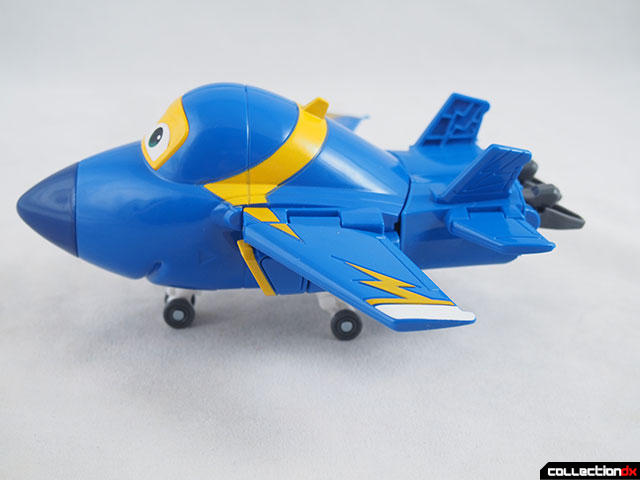 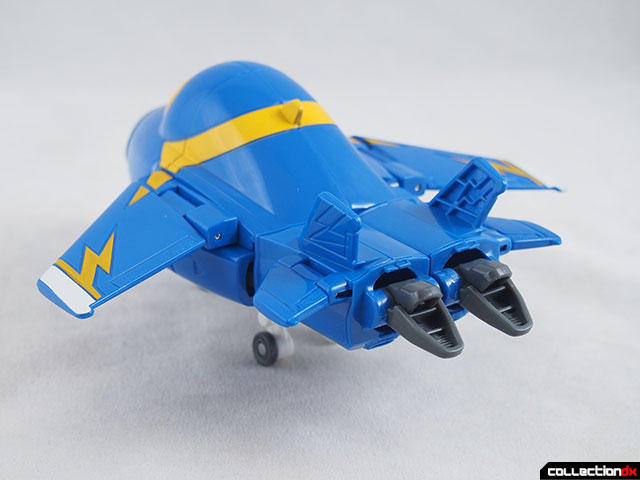 I like how the feet tilt back to become engines. 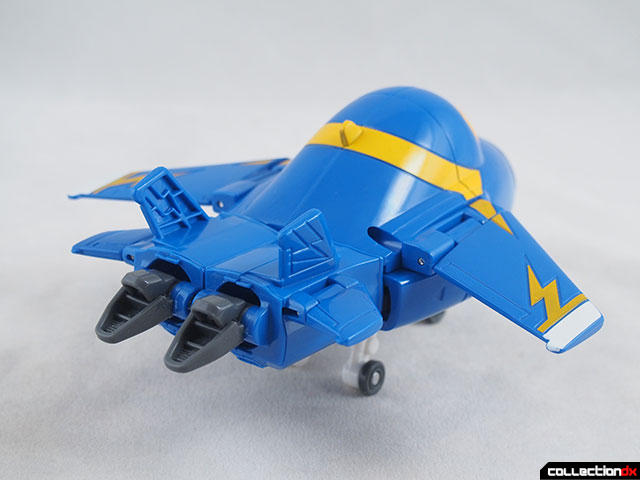 Each landing gear folds in for flight mode. 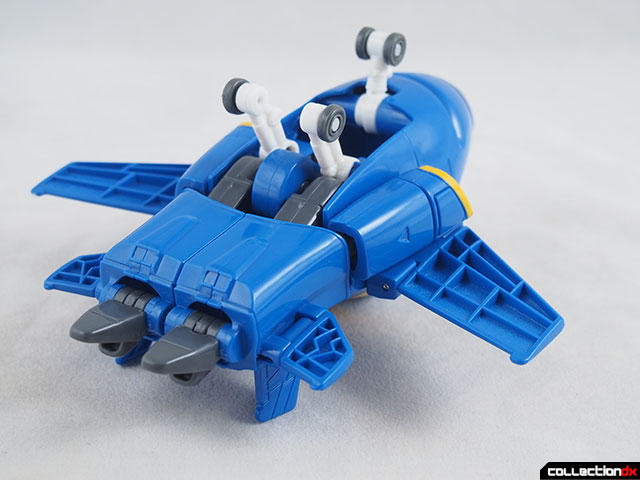 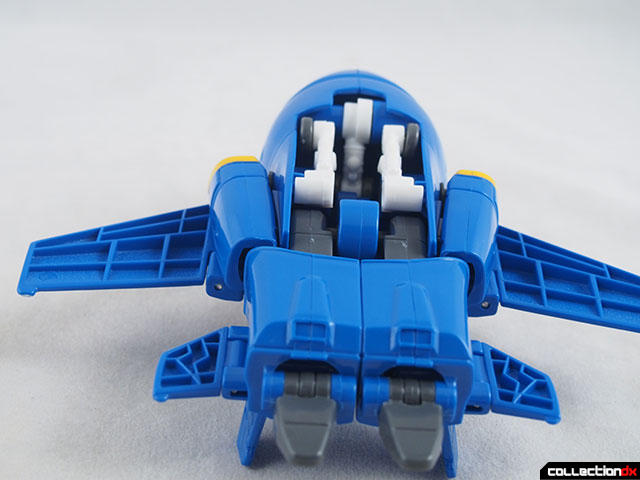 Jet mode is great, but I don't know how these guys aren't getting sued by Disney. They look like they came out of the Planes movie, but they transform. I guess Jay Jay the Jet Plane did it first. 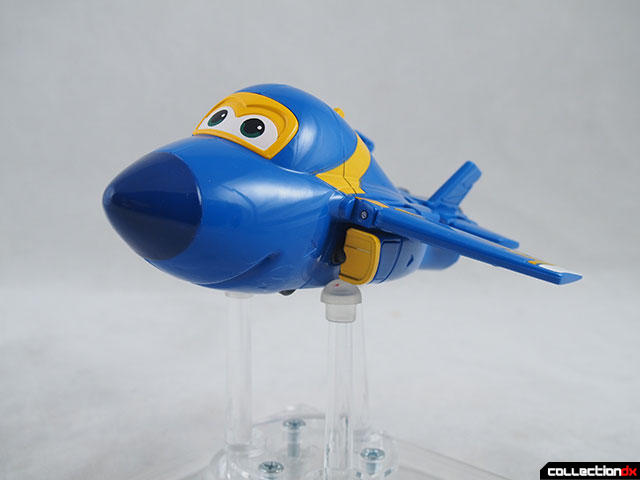 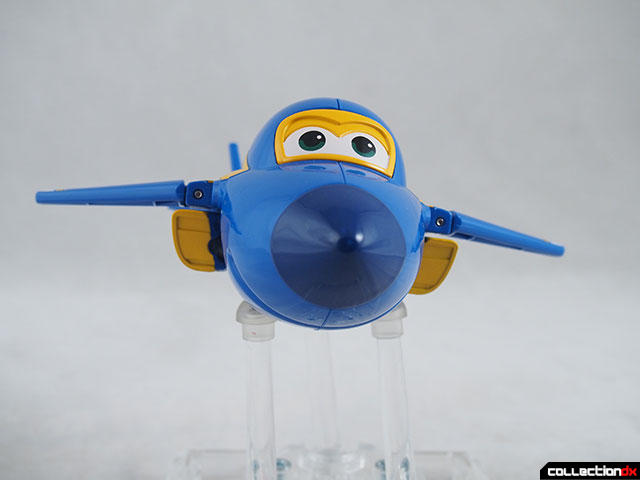 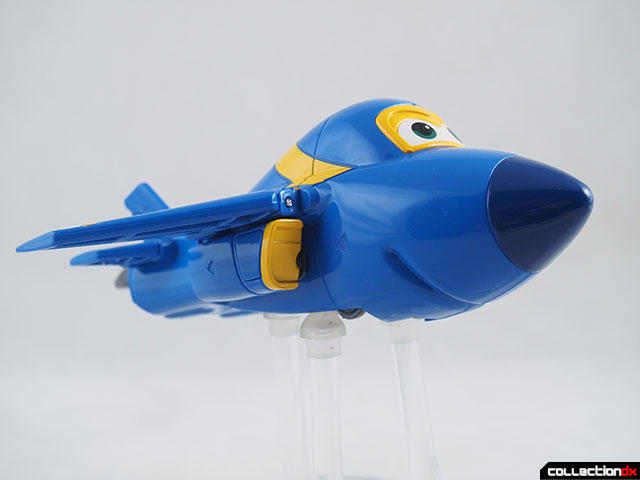 Anyway, these are cheap and fun, there's no reason not to own a couple.

5 comments posted
OMG, I love this and have to

OMG, I love this and have to have one! These are available at regular US retailers?

Toys R Us has them, back in the kids section near the imaginext stuff.

Fighter with a Gerwalk-only mode? Hey, we've seen THAT before!

Hopefully some customizer out there is putting together Macross-themed repaints of Jerome.

Here in Brazil they cost 200 bucks, around US$55. Now I'm pissed off. They look adorable, yet the tiny ones here cost more than the big ones in the US.