One of my favorite things about CollectionDX is the fact that many strange and obscure figures are reviewed here, Knockoff or otherwise, very much intrigue me despite the fact that they usually are pretty expensive on the secondary market( at least by my standards).

One figure specifically that I’ve been fascinated with since I was a kid, (I saw it’s commercial on the internet!) was the sought after and rare “Gats Blocker” otherwise known as “Multi Force 14” from the Diaclone/Diakron lines. What stopped me from actually getting a hold of this figure was it’s typically high asking price, but since in my mind it’s probably even rarer and in turn, more interesting is this full size Knockoff one that was provided for review by Sirtoys.com.

First of all, Gats Blocker’s main appeal is the fact that it’s comprised of 14 individual vehicles that combine into one robot mode, and even for being a KO, I have really no issues with any of them. Each of the 14 pieces aren’t the most convincing “jets” I’ve ever seen or anything, but when you consider the age of the design and what they have to accomplish, I see their minor design misgivings as endearing more than anything. One thing I really appreciate about this Knockoff is that not only is the plastic and paint quality pretty decent, but although the color scheme is different from the original, all the chrome is left intact, which gives each vehicle and their combined form the 1980’s design sensibilities that I really appreciate. 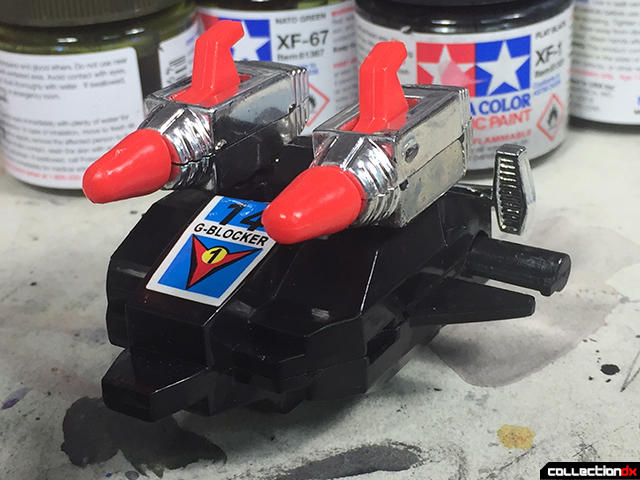 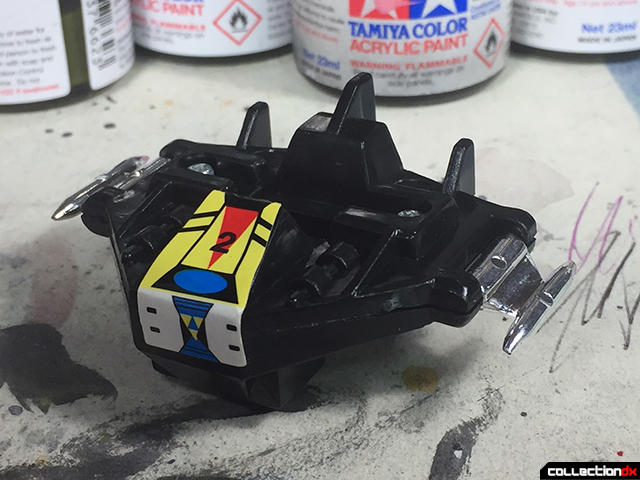 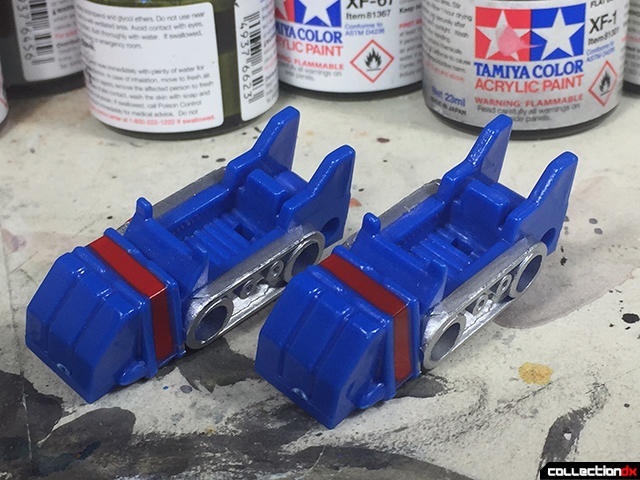 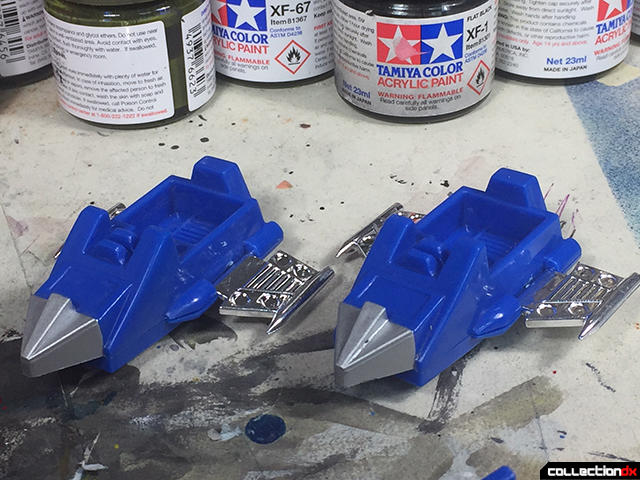 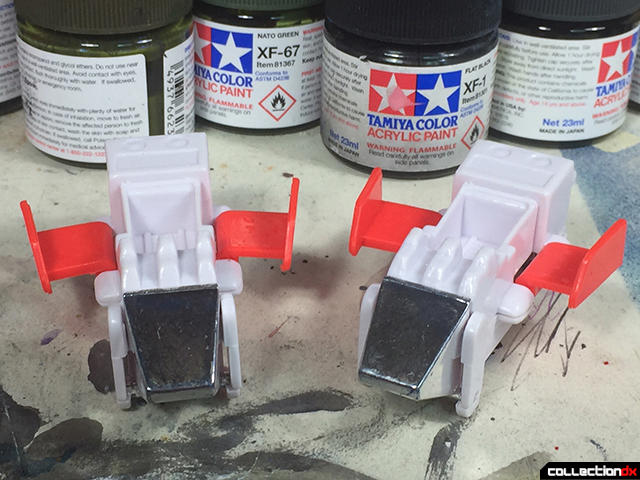 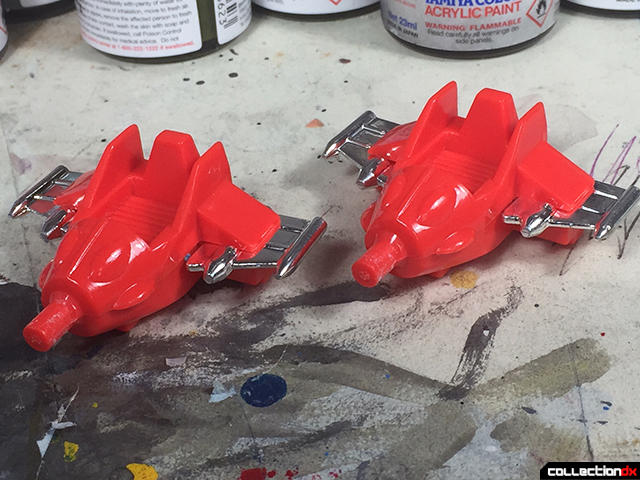 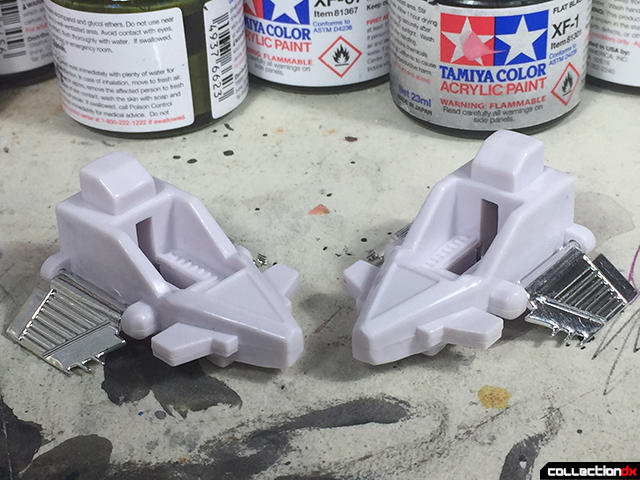 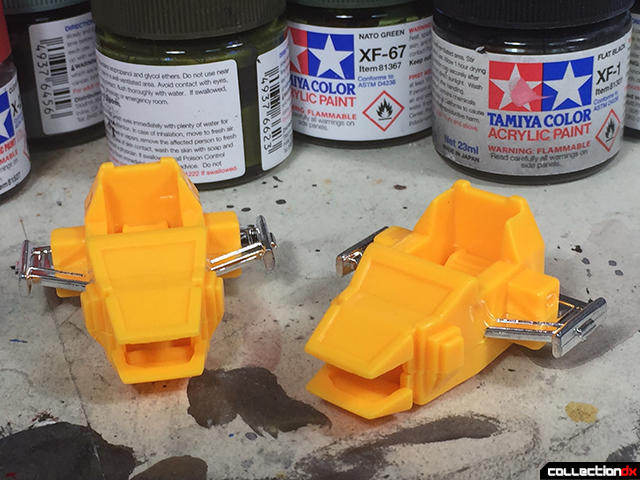 Originally being from the Diaclone line means that each vehicle can indeed seat a pilot figure, and although they no longer feature magnetic feet, there are three pilots included. Considering their small size, each one of these little pilots is pretty adequately detailed and painted, which is impressive given how their inclusion is surprising, considering this is just a Knockoff. One other aspect that impressed me are that both missiles mounted on the main jet vehicle actually fire pretty far. 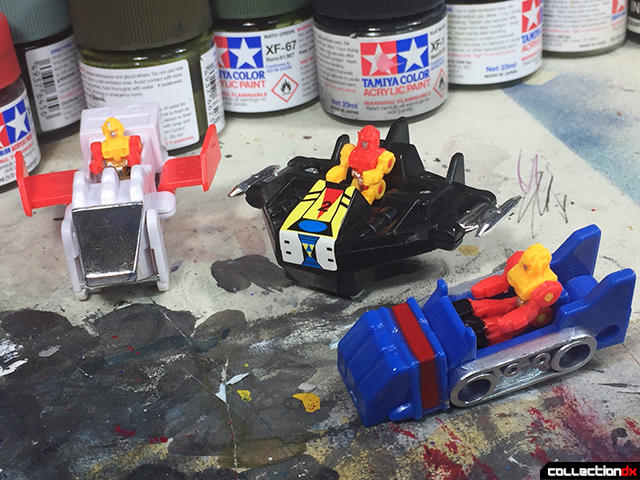 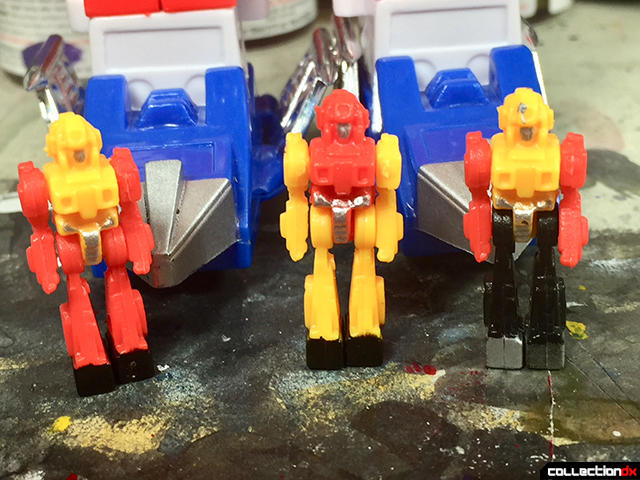 One final addition is a launchpad which each vehicle can deploy from, it’s spring loaded like the original, which was a bit of a pleasant surprise. 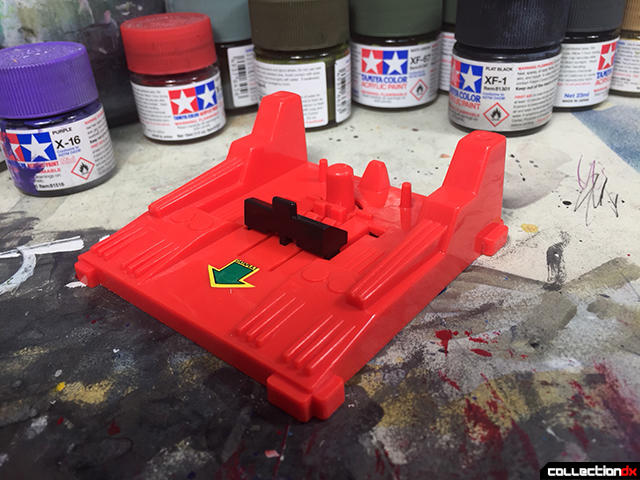 Gats Blocker’s combination sequence is pretty enjoyable all things considered. The actual order of operations is really simple but fun, and it all goes together relatively smoothly when you consider the overall plastic quality and tolerances. I will say that I actually had to sand down the pegs that his lower arms plug into because they were almost too tight for anything to fit on them at all, so be a little wary of that although it’s a really easy thing to fix.

In his combined form, Gats Blocker actually feels pretty solid, as every part he is comprised of fits together pretty well! I simply really love his robot mode. It’s color scheme is all over the place, but endearing in it’s primary color ineptitude and abundance of chrome. One other aspect worth mentioning is his articulation, which is pretty minimal, relegated exclusively to his arms, but I really can’t expect anything more considering the original Gats Blocker’s age. 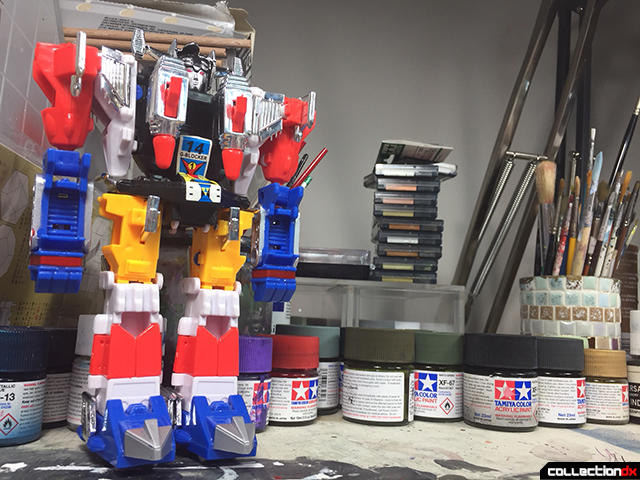 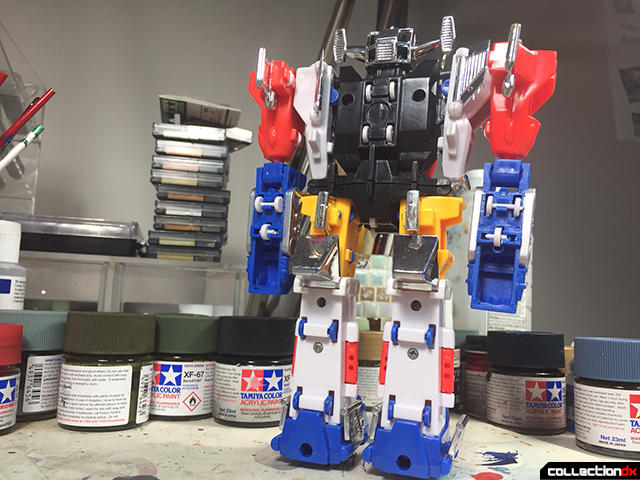 Finally, this KO Gats Blocker stands about 1/3 taller than a Transformers Deluxe. 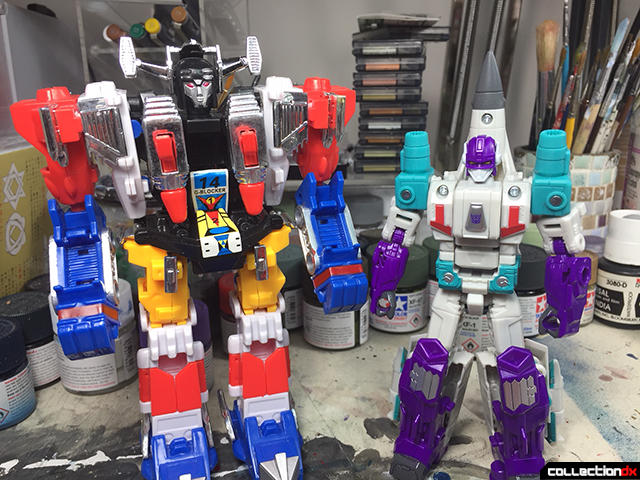 Now, although I would love to tell you that this is it, because for $10 a decent iteration of something as rare or expensive as Gats Blocker is pretty amazing, but actually for better or worse, there is more. Included in this set is a Deluxe size ko of the Transformers Armada Mini-Con Sky-Blast. This figure is functional, but it’s made of a much cheaper plastic than the rest of the set, so it really doesn’t feel very nice. It’s not terrible, it’s just wholly unnecessary for this otherwise pretty awesome set to be saddled with this guy. 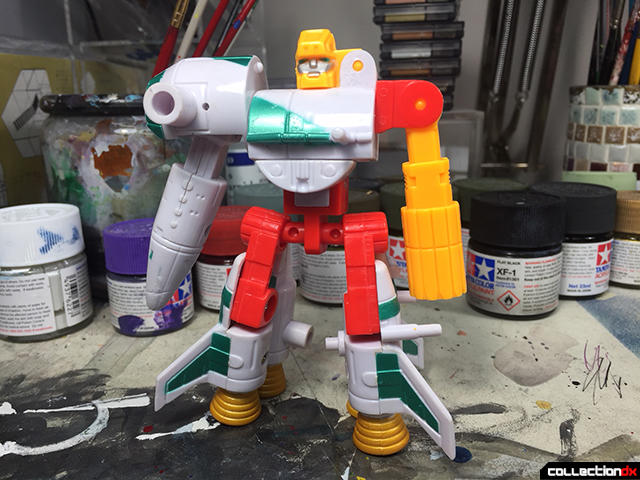 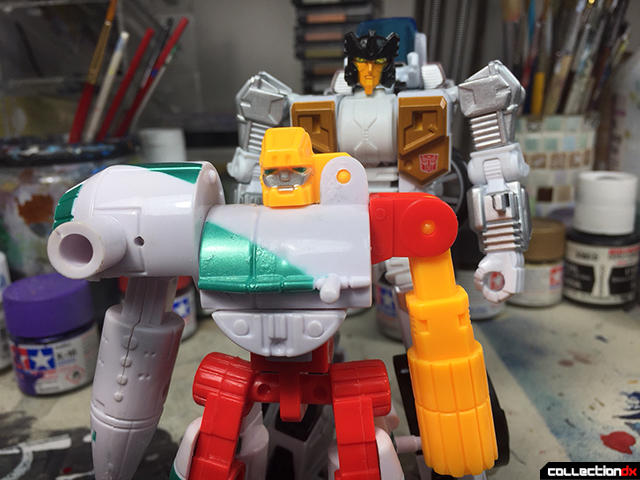 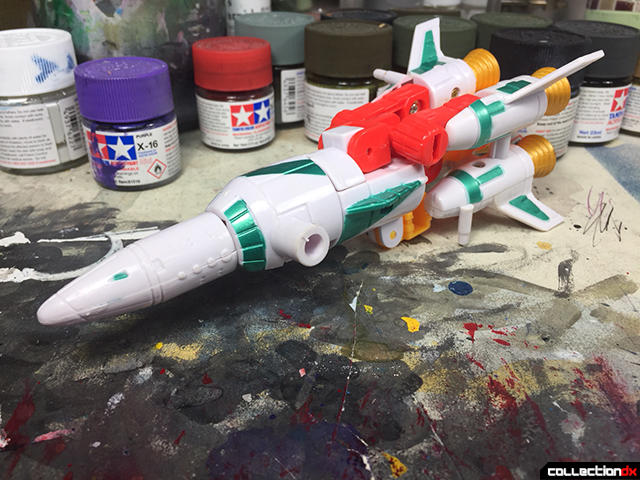 And with that, I really only have positive things to say about this Knock Off Of Gats Blocker. The plastic quality is pretty acceptable, everything works, and it’s a really cheaply priced way to get a version of something that would originally cost a lot more, although it’s new color scheme disqualifies it as a replacement. If you are looking for something rare or plain interesting to add to your collection, I would say this bootleg Gats Blocker is more than worth it if you don’t mind the inclusion of his oversized mini con.