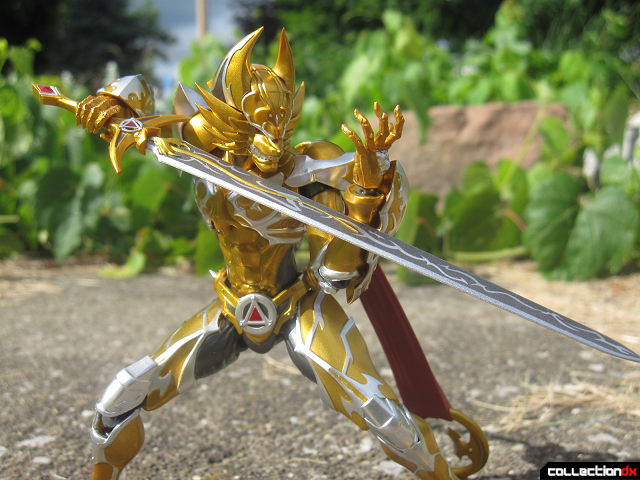 Garo as a franchise took its first step into the anime world with 2014’s excellent Garo: Honoo No Kokuin (Or Garo: The Animation if you’re in America). Rather than being an urban fantasy the previous live-action shows were, the anime decided to shift it’s setting to a medieval fantasy, and with that shift also comes a change in protagonists with the title of Garo now belonging to Leon Luis, an angsty 18 year old with servee anger issues. Who will occasionally burst into flames. Yeah. 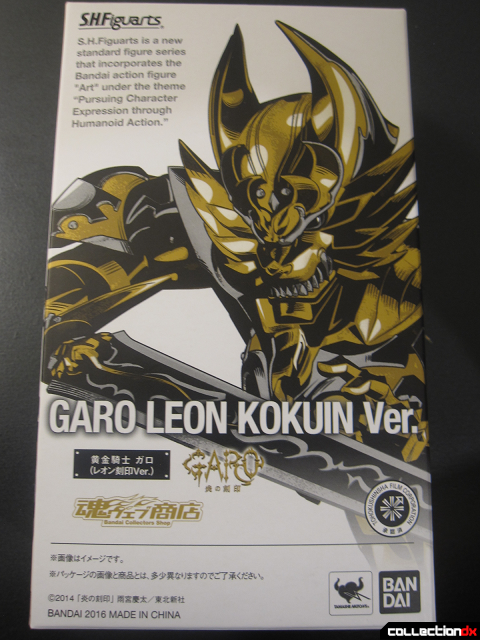 The box for Leon is the new style boxes they’ve been using, which means they’re small and compact, thus easier to store as a result. With that out of the way, let’s move on to the main show. 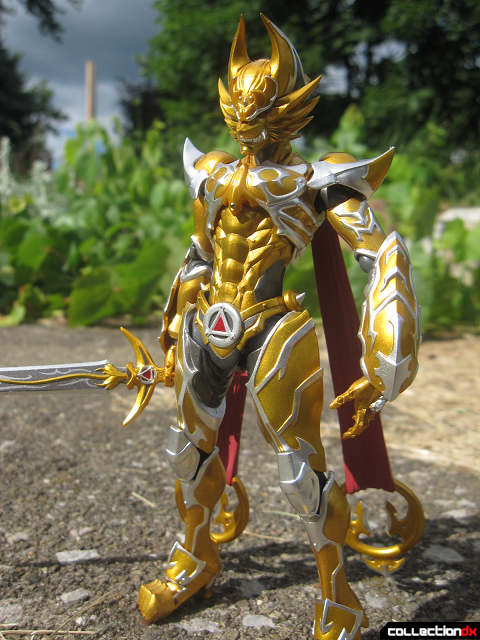 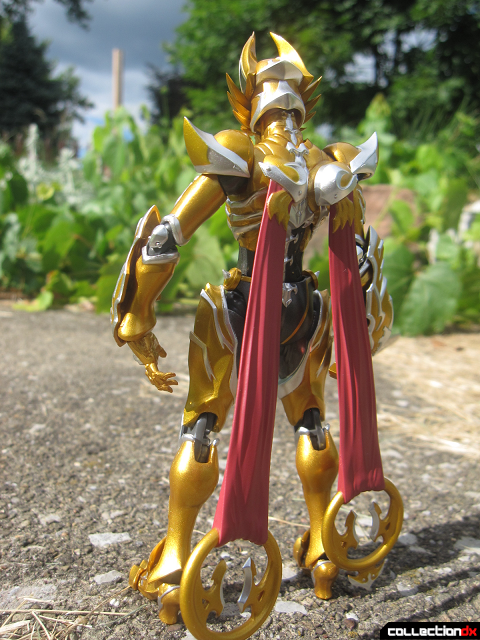 The Garo armor was also redesigned for the anime, reflecting it’s the change in users. If the TV’s show’s armor was a fully grown wolf, then this version would basically be the young wolf pup. Standing at around 6 inches tall, Leon’s armor faithfully recreates the CGI model seen in the show, barring the lack of any actual fire. It can’t be understated just how absolutely gorgeous this figure’s paint job is, with the gold and silver’s metallic sheen looking rich and vibrant, especially in the sunlight. As a result it completely avoids the issue of some of the previous Garo figures having a mustardy looking gold to them. 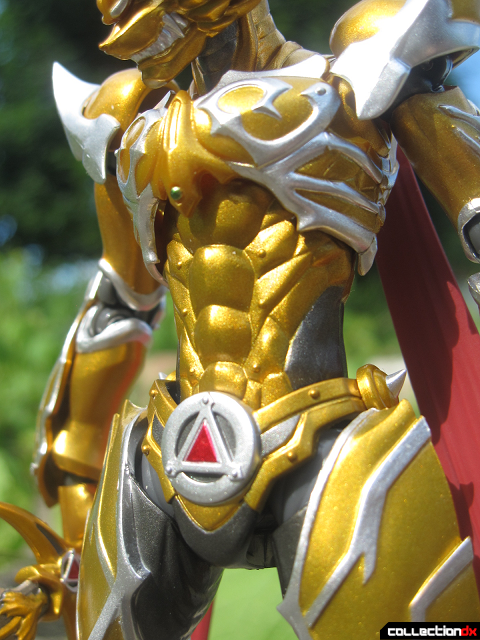 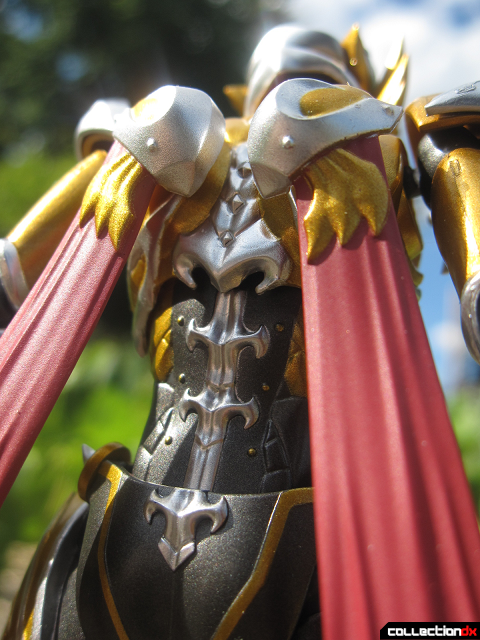 In terms of sculpt the figure’s no slacker either, with plenty of detail being doled out all over the figure. 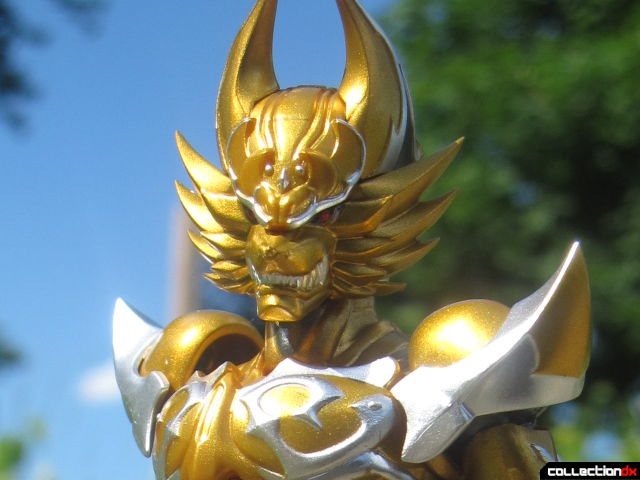 I especially like the head sculpt, looking appropriately fierce and angry. 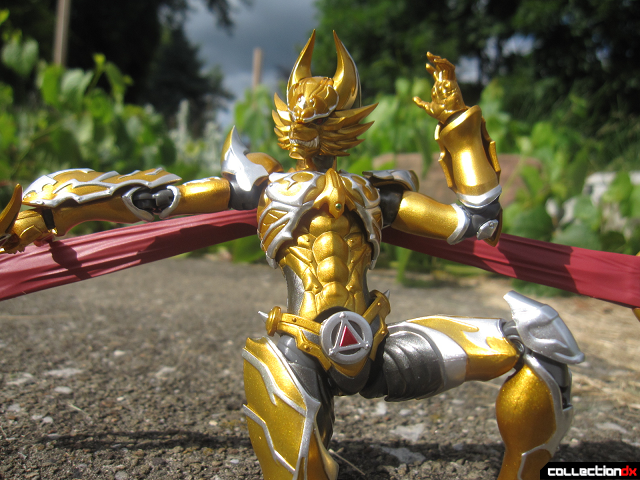 Being a Figuarts, Leon is packed full of joints, allowing you to basically get him into nearly every pose you could want. 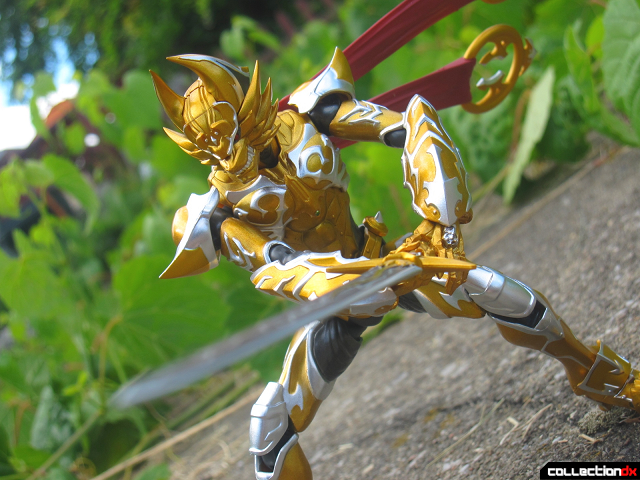 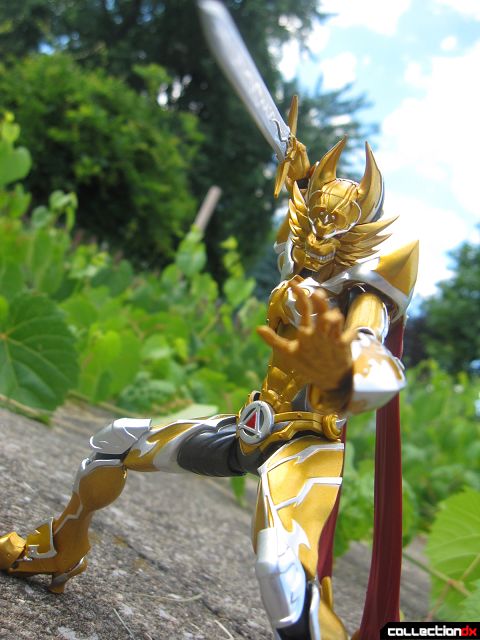 Even the scarves are on ball joints, lending a degree of dynamism to them. 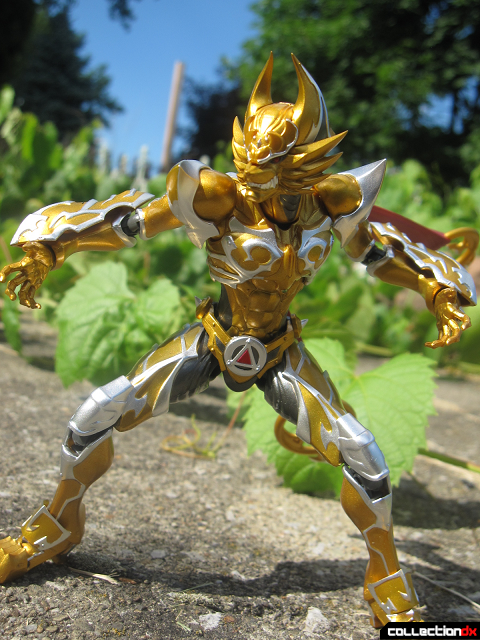 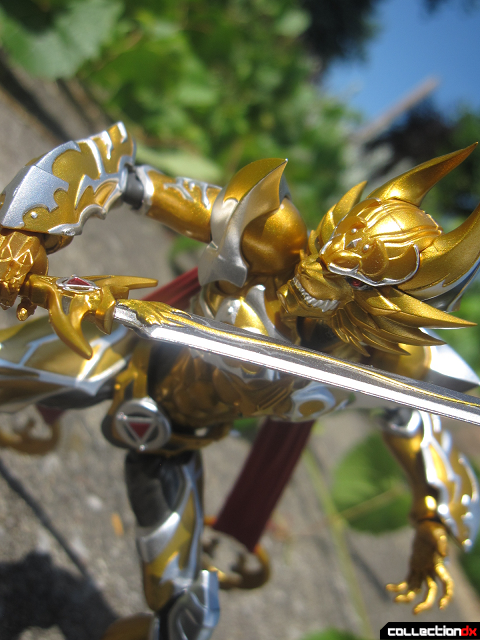 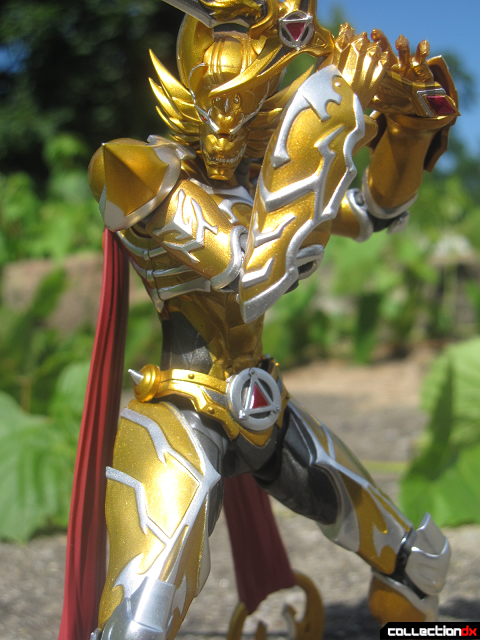 The only place of contention I would have with it is that the torso joint doesn’t allow enough forward motion, preventing one from getting some really hunched animalistic poses. You can get something close, but it’s not enough for my tastes. It’s no deal breaker, but it is something that bothers me when I’m posing him. 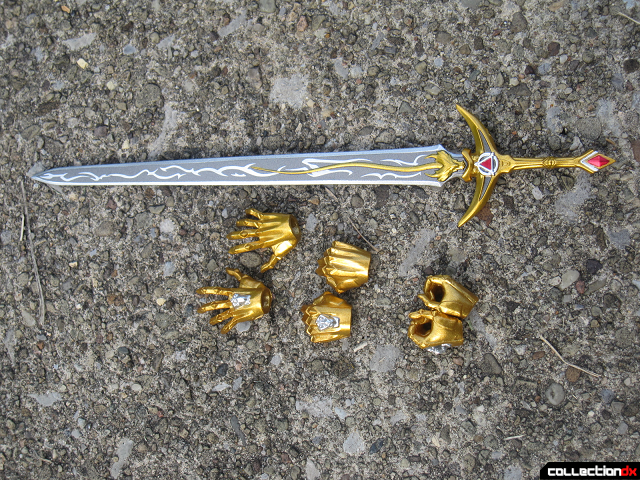 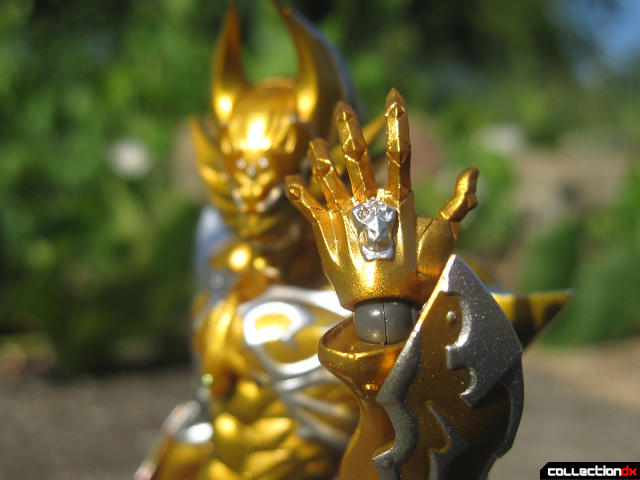 Accessories wise, Leon comes with 3 pairs of hands: fists, splayed open hands, and holding hands. All of his left hands also has his magic talking ring, Zaurba molded on to them, although the sculpt is too mushy thanks to the size of the hands to really make out any fine detail. Leon also comes with his version of the Garo blade. 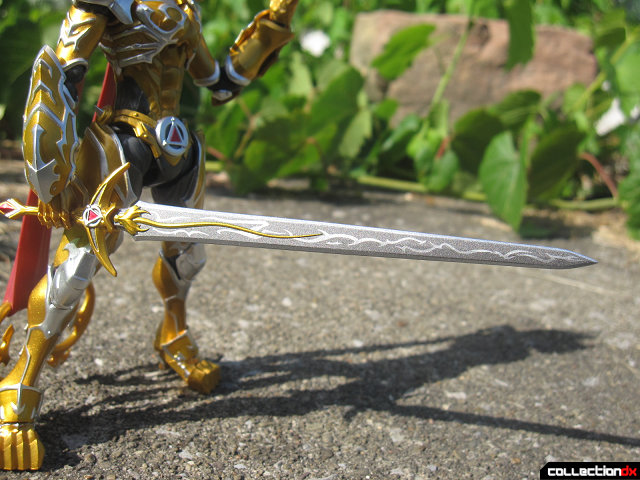 Which is comically long compared to how it looked in the anime. It’s less of a long sword and more of a claymore at this length. Despite this quibble, the sword is looks just as great as the rest of the figure. 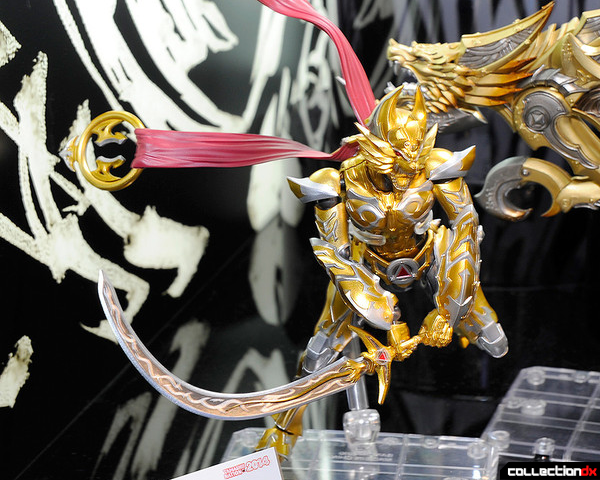 If I had an issue with the accessories though, it’s the lack of the yelling open mouth head seen in the prototype figure. In the anime the armor’s helmet would emote based on the user’s reaction, and with Leon being as angry as he is, that naturally involved a lot of yelling. The lack of it is a shame given how fitting it would be with the character. 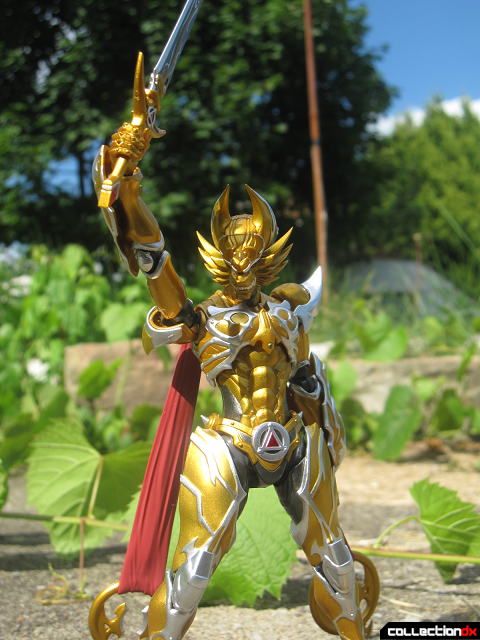 So, should you get this figure, especially given that it’s one of Bandai’s pricey Tamashii Web Exclusives? If you’re a fan of Garo, and especially the anime, I would say it’s absolutely worth tracking down on the aftermarket. Any issues I have with the figure are minor at best and the actual fit and finish of this figure is nearly pitch perfect. Plus, I can’t overstate how beautiful he looks in hand. For people who just think he looks cool though? I’d consider debating over just how much you want him, especially if the aftermarket prices turn out to be too crazy. If you can justify it though, you absolutely won’t be disappointed. 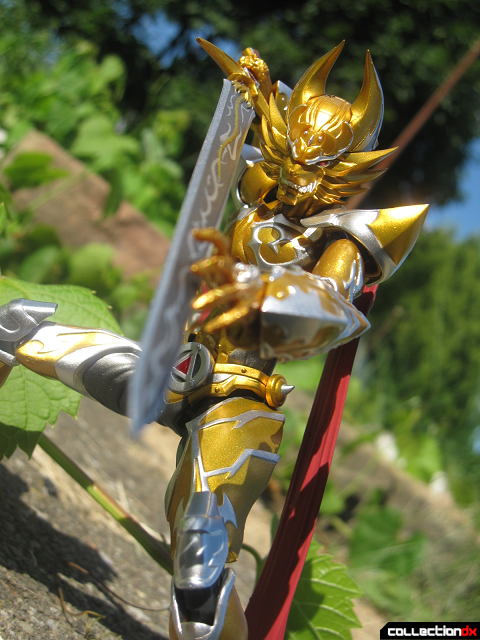 Great review! I decided to pass on him since I didn't care for the anime. But boy, is he gorgeous. Shame about the emoting face though.

I'm hoping that Bandai continues with on with making Garo figuarts, cause with how good this and the Ryuga Ver. looks it could end up as one gorgeous sub-line within figuarts.

They better. Ryuga version was great. I can't wait to get my hands on the Raiga version.