As a fan of both Jumbo Machinders in general and the villains in the line in particular, I was very excited when I saw that Mandarake had produced a new character in that tradition, with Gelbros J3. When it was revealed not long after that there would be a similar Bear Model x Dragonboy production of a new jumbo Dabulas M2, I was less excited. I already owned the original Popy Dabulas M2 jumbo so why would I need another? Add in the fact that I have so little room to be adding all these new jumbo sized toys, I initially decided to take a pass on this release while simultaneously hoping to see more, previously unreleased characters made in the future. But I now have the opportunity to re-evaluate the toy in person.

The toy comes in a box very reminiscent of the original boxes, albeit with some differences. For instance, it features a similar color scheme and style, although the art is more a direct representation of the toy, whereas the original box features a more animated, lifelike drawing of the character. 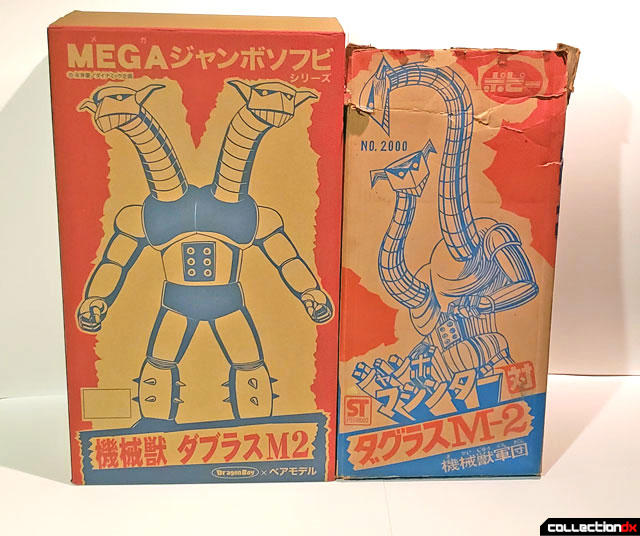 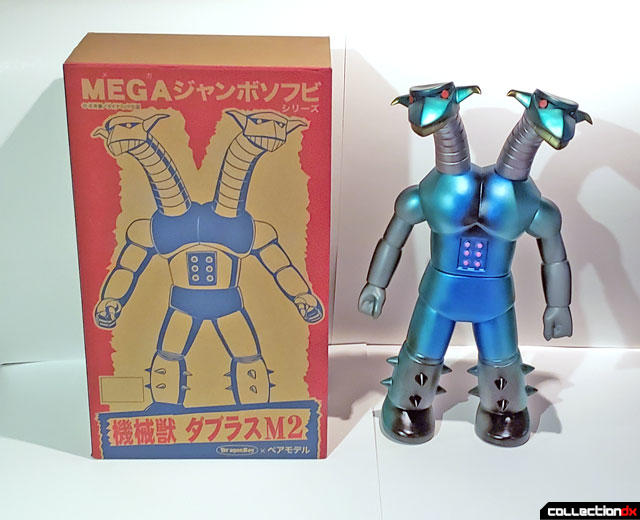 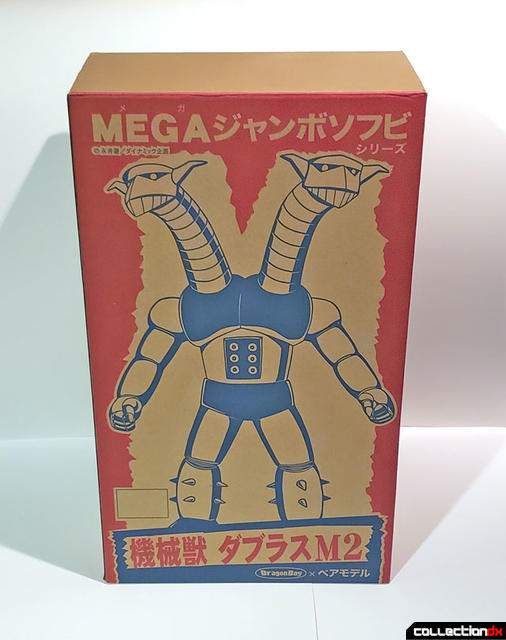 The box has the logo of each contributing company on either side. Similar to the the Gelbros J3, but different from the vintage villain boxes, the back of the box has no printing whatsoever. 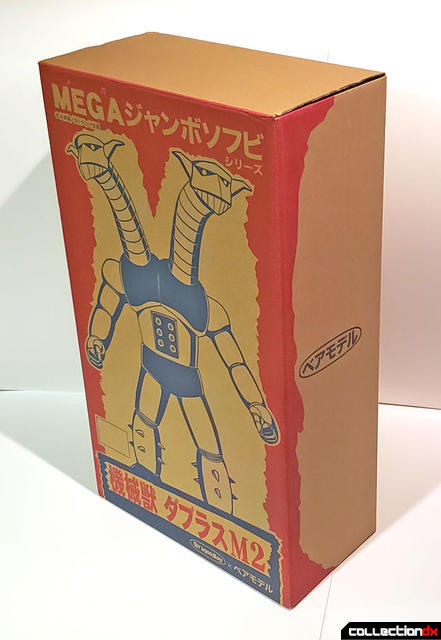 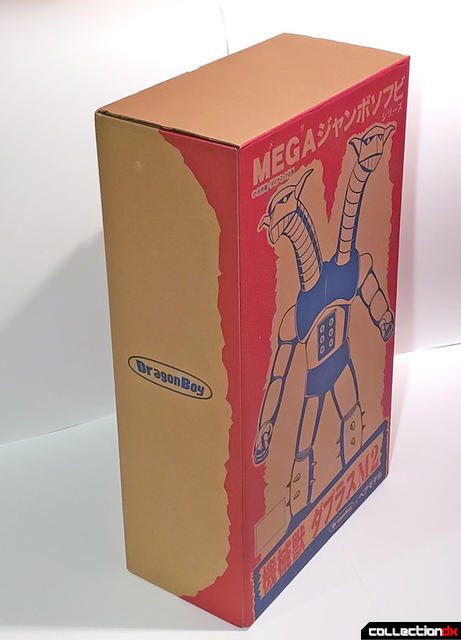 The toy is even more different from the original Popy Dabulas M2. The first thing you'll notice is that the heads are more anime accurate than the vintage toy. At first I didn't really like this. Although I did see the cartoon as a child, my real connection with this character comes from the excitement I felt discovering the toys as an adult. So even if the new toy is more correct, I found it jarringly different from what I was used to. I felt it lacked the childish charm of the original toy. But now that I have it in person and am evaluating it on it's own merits, I actually really see the appeal of having a jumbo version that is more accurate to the character while still maintaining an overall vintage aesthetic. 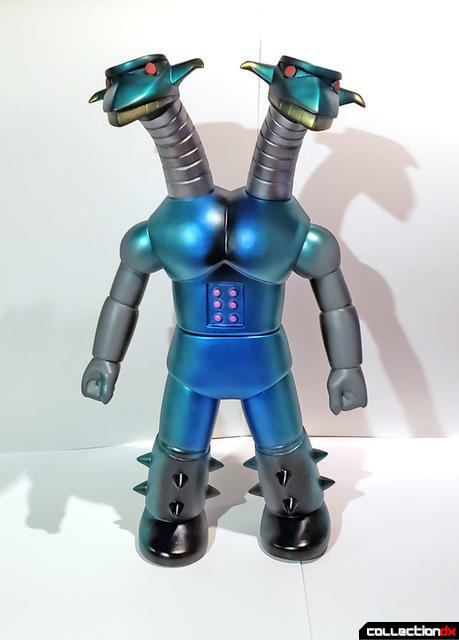 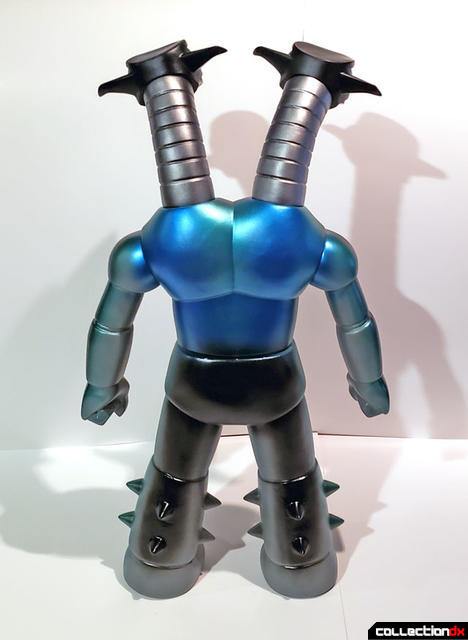 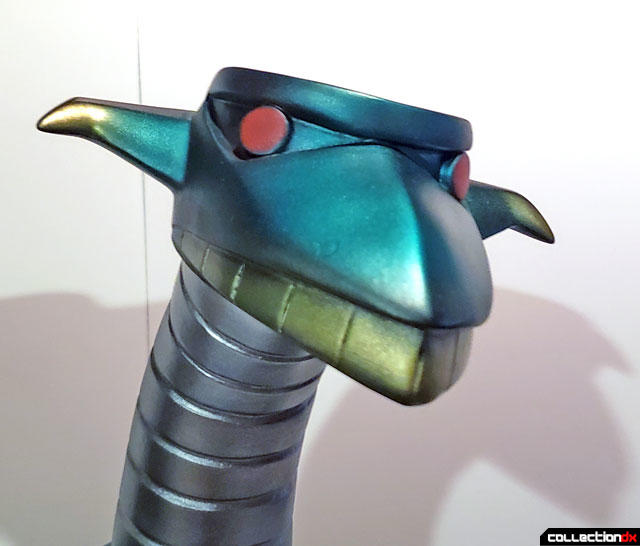 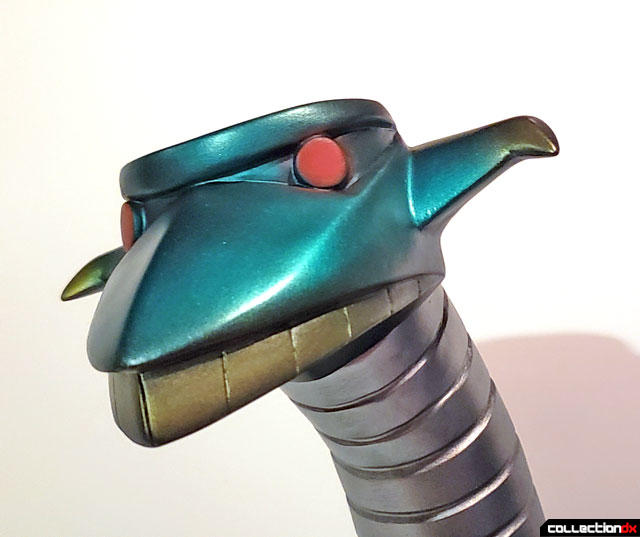 Speaking of being more anime accurate, this representation of the character has a color pattern that is much more correct than the original toy. The original was way off! Furthermore, the while the paint on the original is a flat color with hand painted details, the new toy has a more metallic, airbrushed paint application. 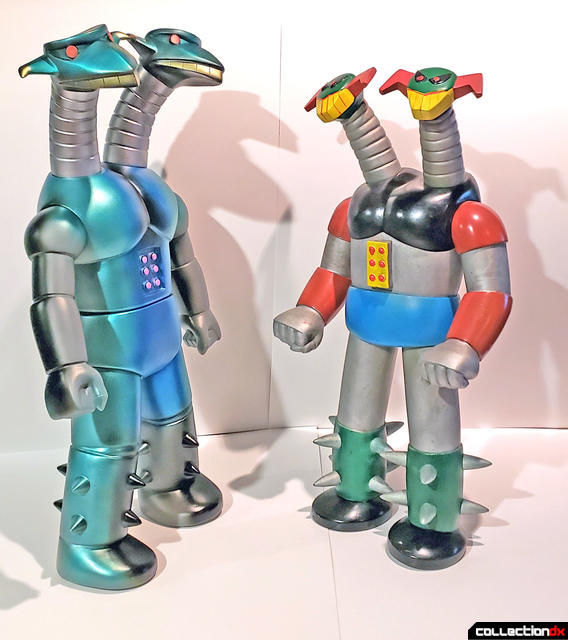 It's also larger. At approximately 22" tall, it's a full inch and half taller. 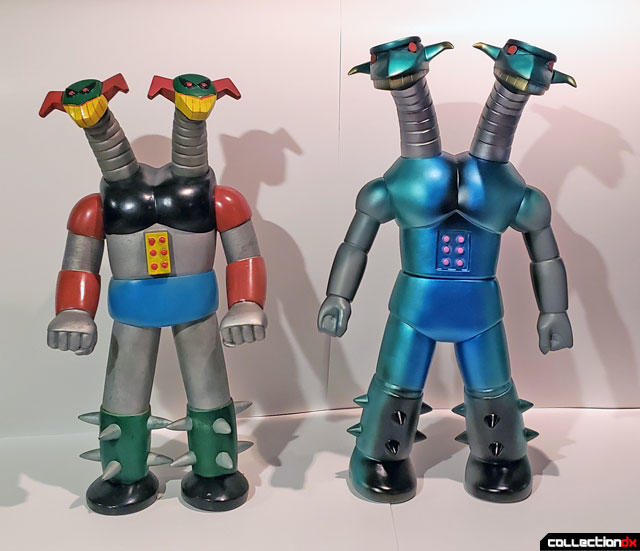 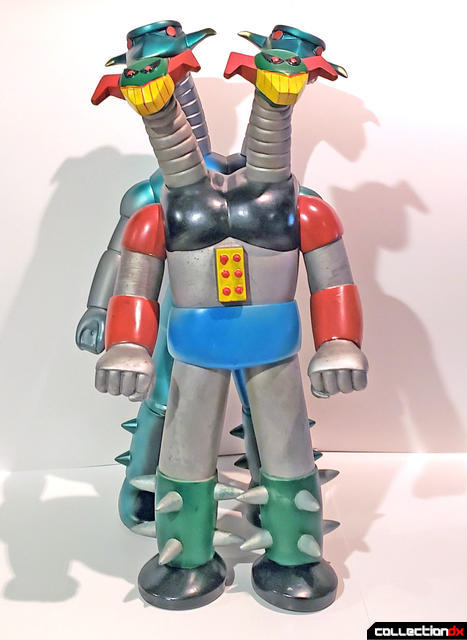 The toy differs in other, more subtle ways too. For instance, the hands are positioned in a more classic pose. The vintage toy looks like it's holding a pair of imaginary handlebars. Also the feet are spaced farther apart, allowing for more room between the spikes on the legs, which are close enough to touch on the Popy version. 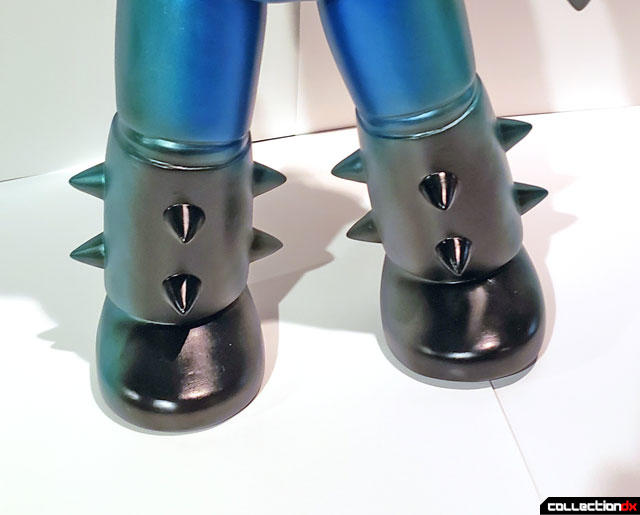 The Popy and the Bear Model/Dragonboy version both have the character name, licensee and manufacturer names etched into the feet. My example was even personalized in marker just for me! 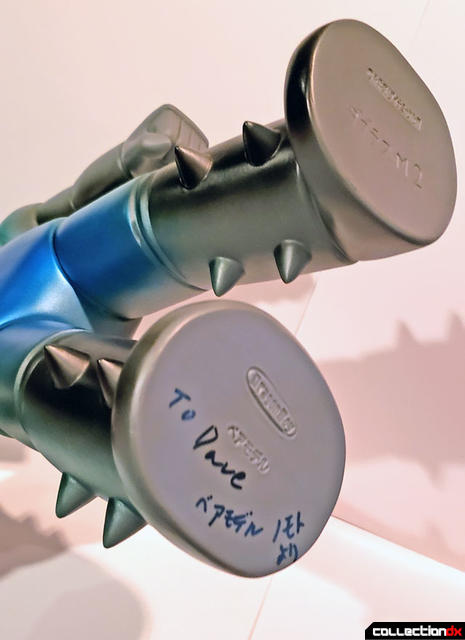 Both versions share the same points of articulation, too. The arms, legs, heads and the waist all turn. 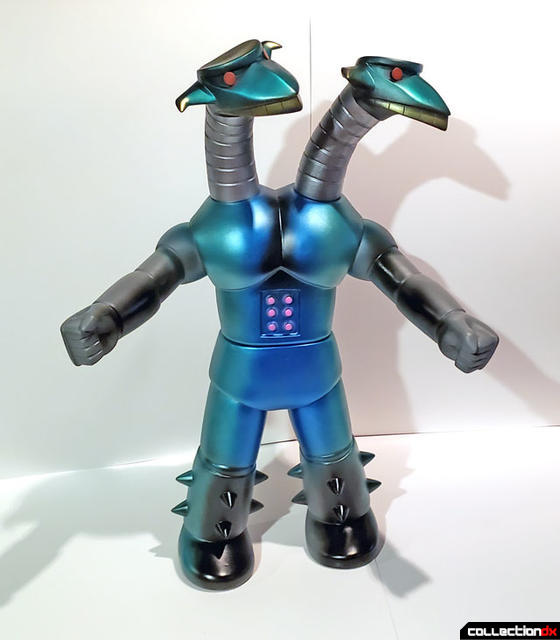 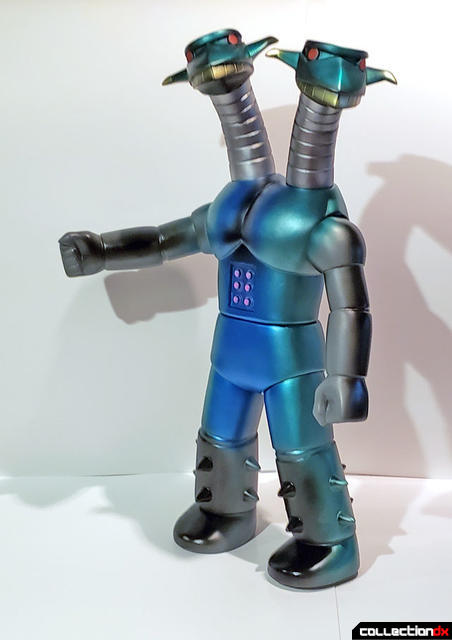 This toy has already been released in several different versions, including in at least an unpainted green, this metallic version, a limited green version, a limited blue version, a limited black version and a Mandarake exclusive purple version. Furthermore, the version you've been looking at in this review was not only personalized on the foot for me, but was painted in an exclusive color for me! While it initially appears to be just the regular metallic version, closer inspection shows some differences in the neck and heads. Specifically, the neck on mine is solid silver instead of having green like the regular one. Also, my teeth are gold instead of silver, my ears are green instead of purple and mine does not have any gold in the eyes! 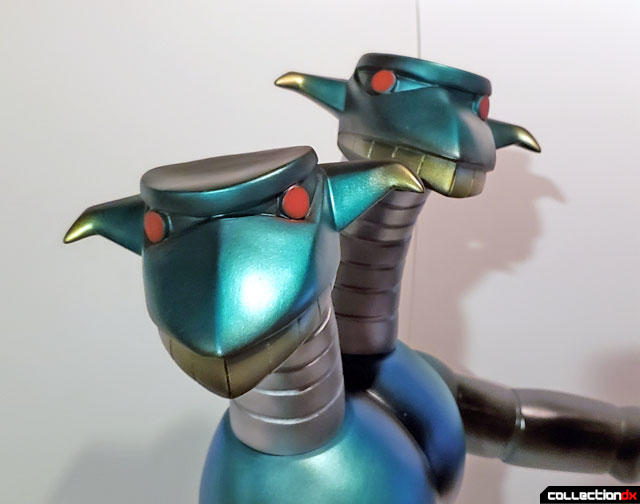 So while I'm still hoping to see jumbos made of villains that we haven't seen before, if I take the broader view, I'd have to accept that most people aren't lucky enough to have a vintage Dabulas M2 and that if we've going to get a new version, getting one that is distinctly different from, and dare I even say an improvement on, the original version is satisfying. The next release in the line is Rokuron Q9, another character already with a jumbo toy. If the line continues, will they make more of the existing original line-up? Could a new Garada K7 possibly be in our future? Here's hoping that they right the wrongs of the much maligned Unifive Garada and Dabulas has his partner in crime once again by his side!