The Revo Star Wars line has been hit and miss, with great representations of the characters that have little or no use for the Revoltech joint system. So, it begs the question, is it a Revoltech if it has no Revoltech joints?

The Revo Star Wars 006 X-Wing is a Revoltech in name only. The only joint is in the stand. It arrives courtesy of HobbyLink Japan 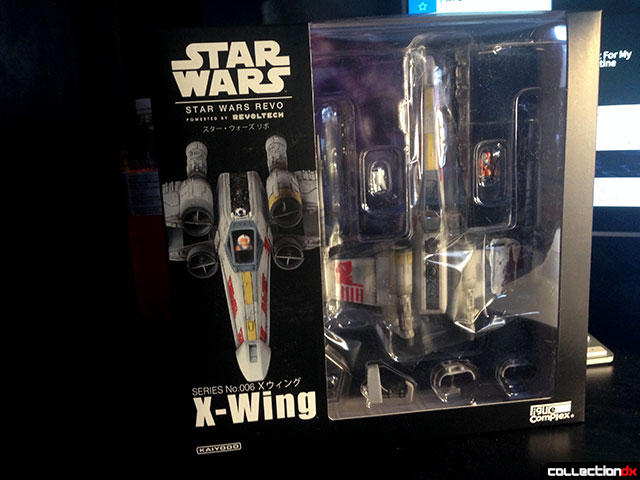 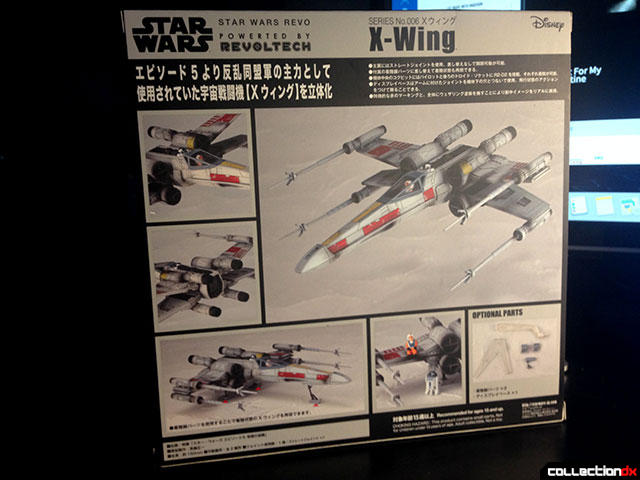 The ship is about 5 inches long and made out of lightweight ABS plastic. The sculpt is tight, and the detail is great, but the thing feels like a cheap plastic model, not a $60 toy. 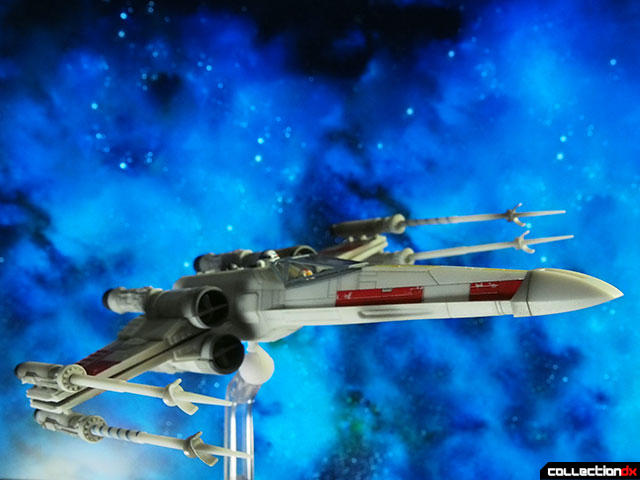 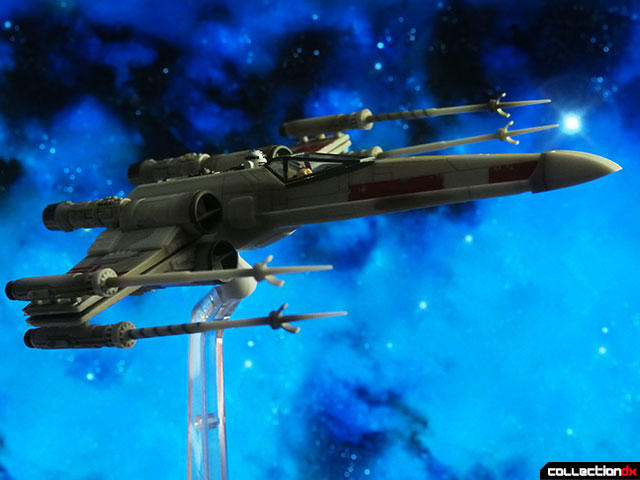 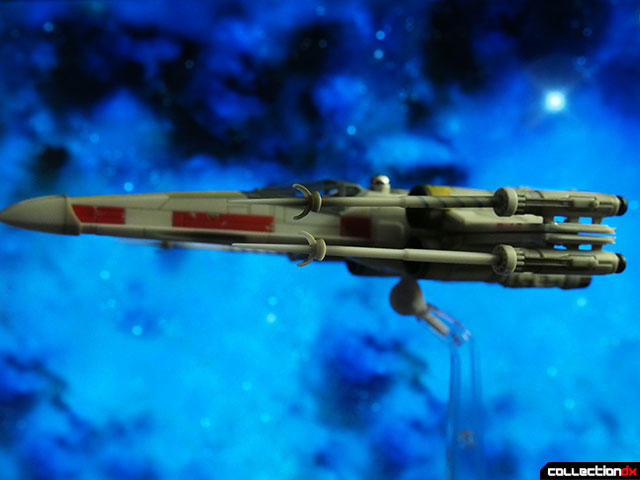 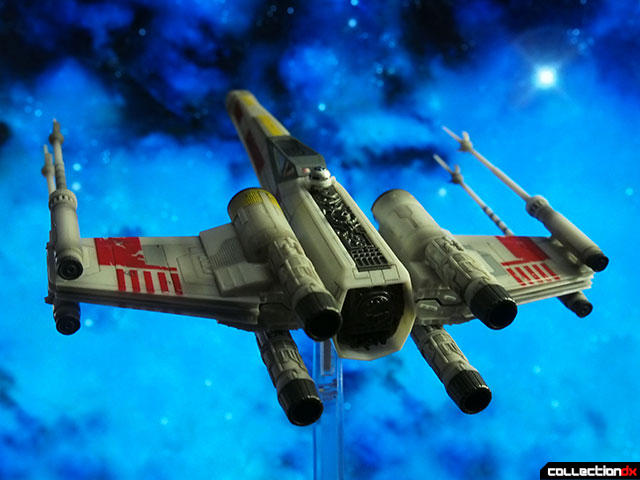 The S-foils have little tabs that keep the wings closed, but there's nothing to lock them into a horizontal positon. the result is the wings tilt out of place easily. 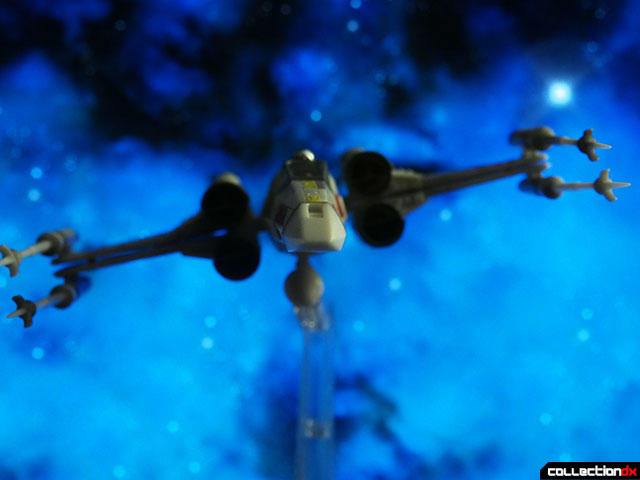 With the wings open into attack position they are much more stable. The insides also feature nice paint detail. 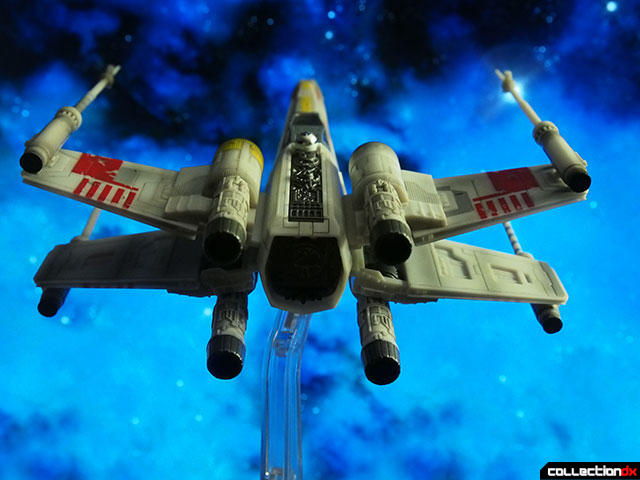 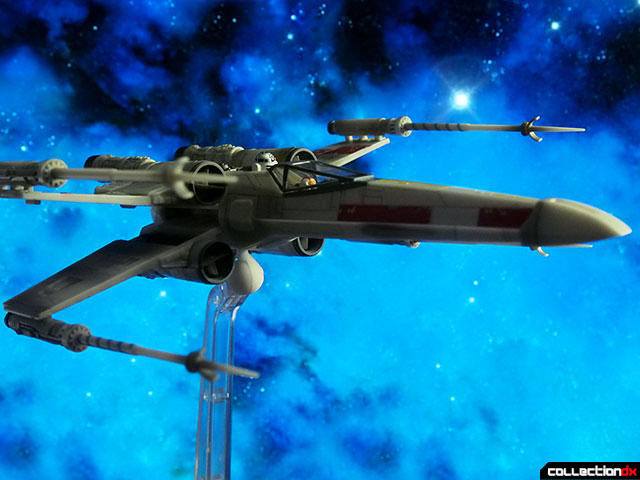 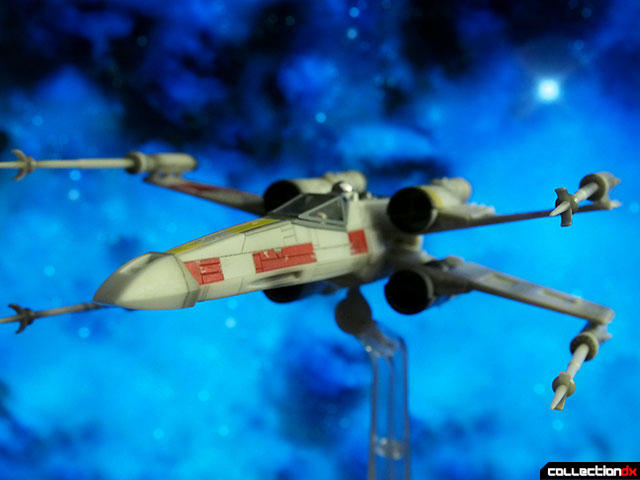 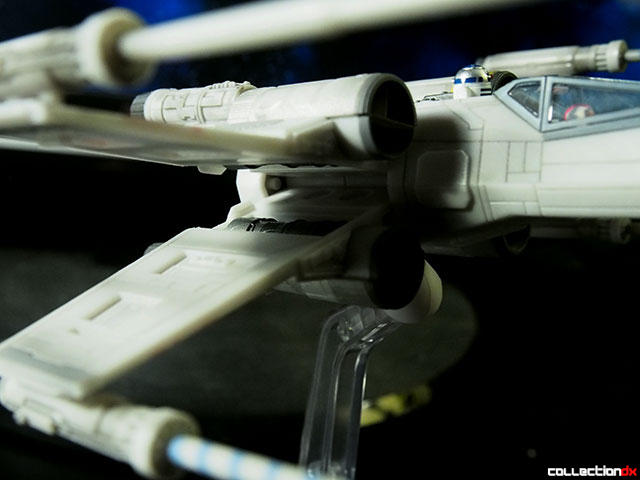 The clear cockpit has a removable miniature figure of Luke Skywalker that can be removed. I wish the canopy opened on a hinge, but it just plugs in. 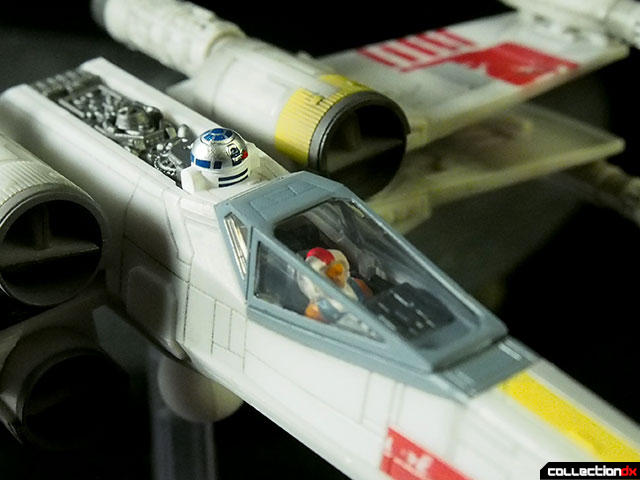 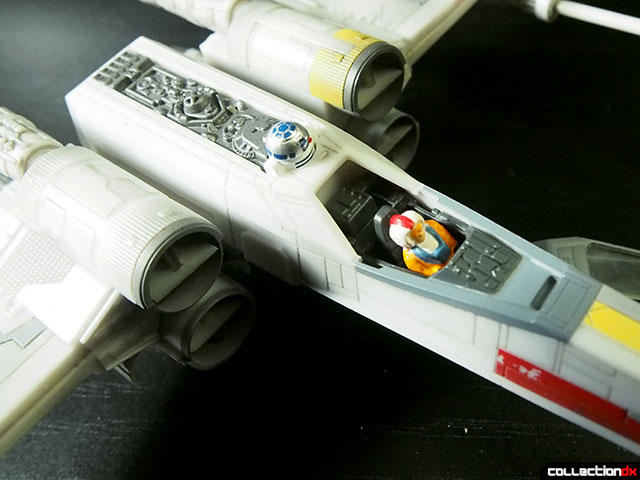 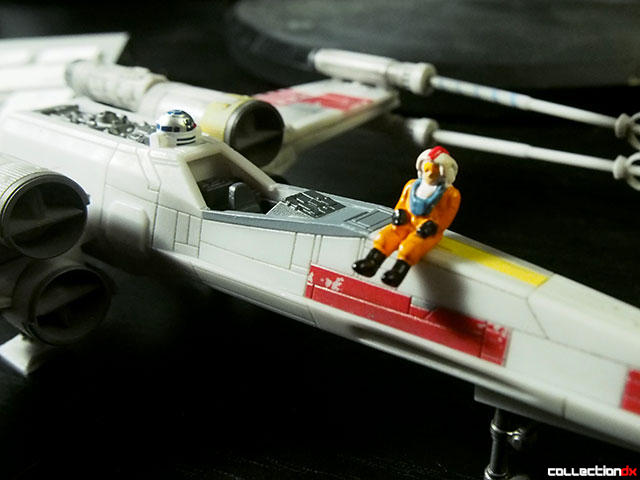 The tiny R2-D2 has it's third leg extended, and can be fit into the spot behind the cockpit. To place him, you need to lift up the entire back panel which is on a hinge. Odd that there can be a hinge here, but not the canopy. Once closed, the fit is not too tight and R2 can move around. Turn the ship upside down and you may lose your droid. 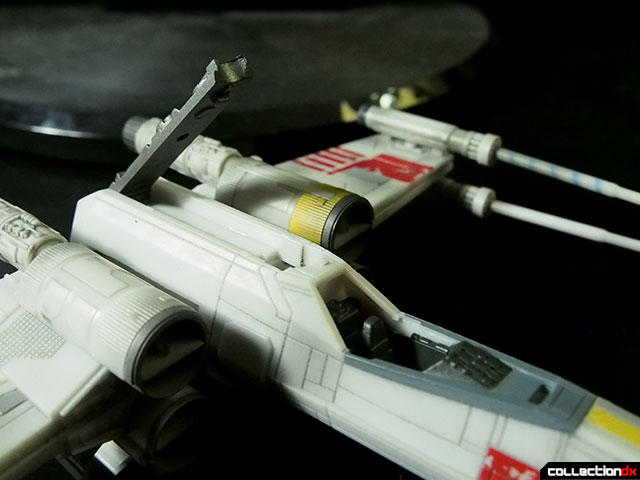 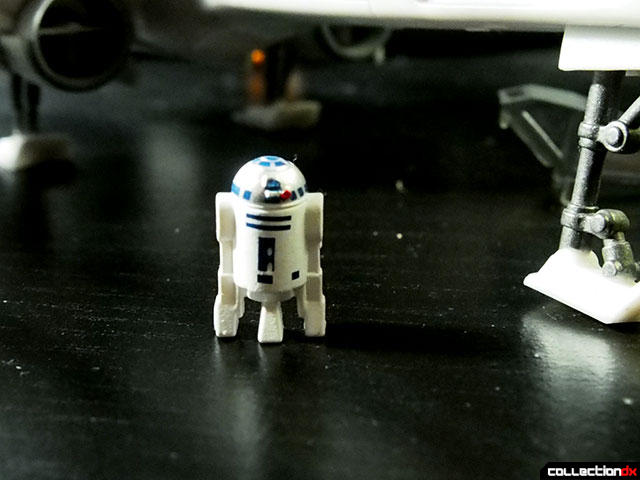 The toy includes a set of swappable landing gear. You need to remove the tiny panels, and then replace them with the exposed gear. Each piece is keyed in such a way that they only fit in one spot. 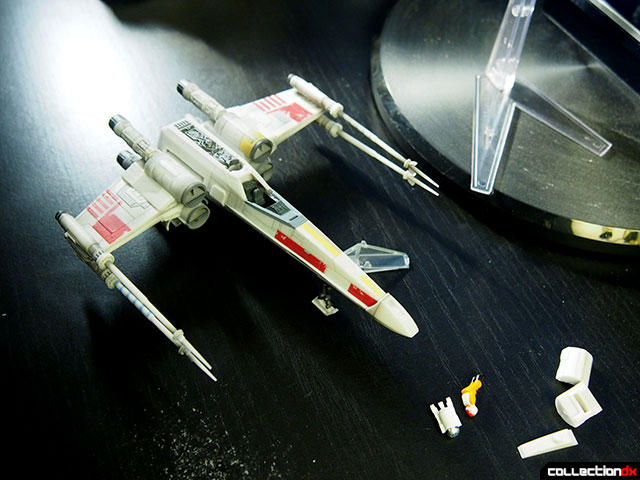 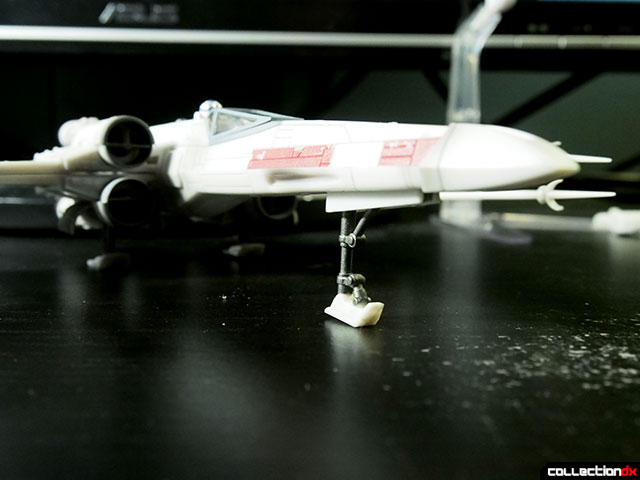 Note the clear stand with the ONE Revoltech joint in the set, 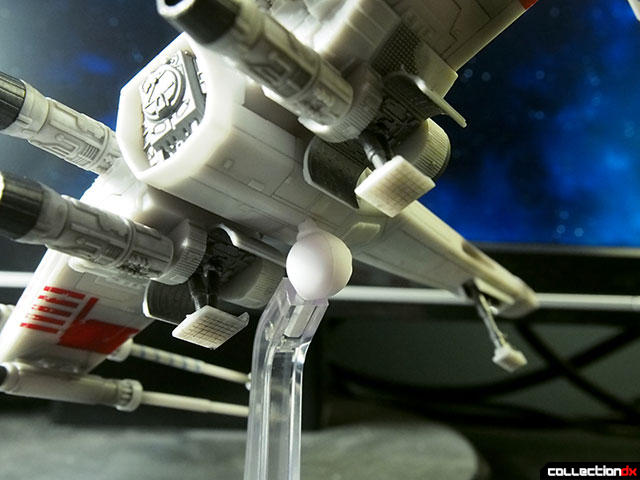 The engines on the back are separate parts that just plug into the wings. As such, they can be easily misaligned or removed. 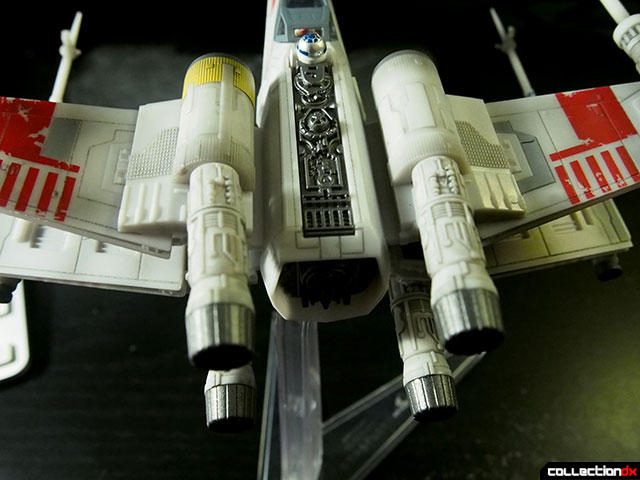 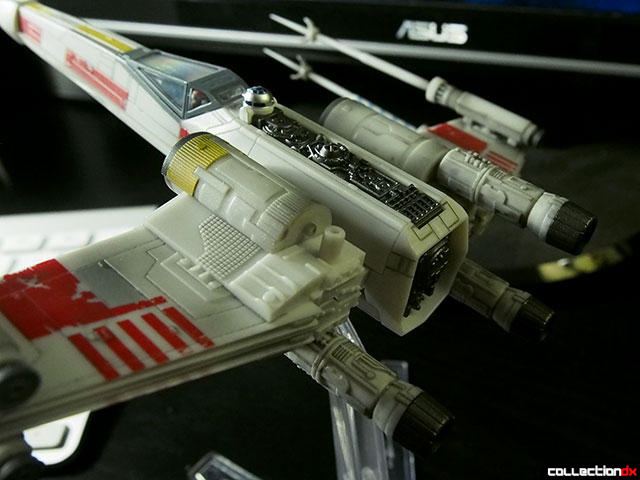 There's another issue as well - one of the weapons on the wings is bent a little.

This thing looks great, and makes for a great desktop model, but as a toy it fails on many levels. Mainly this is due to the high price point and the lack of Revoltech joints. In addition, for the price there could have been many simple opportunities taken to improve this set:

It just smacks of laziness, and a bit misleading to even call this a Revoltech toy.

That being said, if you still want it, you can get yours at HobbyLink Japan

3 comments posted
Yuch! As a modeler that thing

Yuch! As a modeler that thing bothers me. I think even the Revell pre painted snap tite kits are better shaped and painted. And why would an action figure company and line put out what is essentially a pre built model with no action features?

From a modeler so eye the major flaws I pick out just from these photos. Horrid translucent unpainted white plastic with overly bright red and yellow markings and modern lazy factory weathering attempts. Bleach! If any of you want a nice X-Wing for your display hunt down a Fine Molds kit. Or seek out one of the acceptable die casts that have been made.

I think the 20 year old Micro-Machines Action Fleet X-Wings are superior to this thing.
You can still get then NISB on eBay or Amazon for $40-$50, too, so the price is comparable.

That's exactly what I scrolled down to comment. Hell, you can get a loose Action Fleet X-wing for under 20 bucks.