Goku powers up on CollectionDX thanks to the ToySource. You can pick up your own mighty Super Saiyan there!

Dragon Ball: Resurrection F is the second film in a new wave of movies based on the Dragon Ball universe. It is part of an alternate reality in which Dragon Ball GT never happened. In this rewritten timeline, the followers of Frieza hatch a plan to gather the Dragon Balls and resurrect their defeated master. They succeed in bringing back Frieza from his eternal torture of marching stuffed animals. Hell-bent on revenge, Frieza trains himself to face Goku and make him pay for submitting him for the diabetes-inducing sweetness he experienced in hell.

Lucky for Goku, he was training under Whis, the martial arts master that keeps the God of Destruction in check. Thanks to Whis, Goku is able to unlock a new, stronger form of a Super Saiyan, which is what this toy represents. 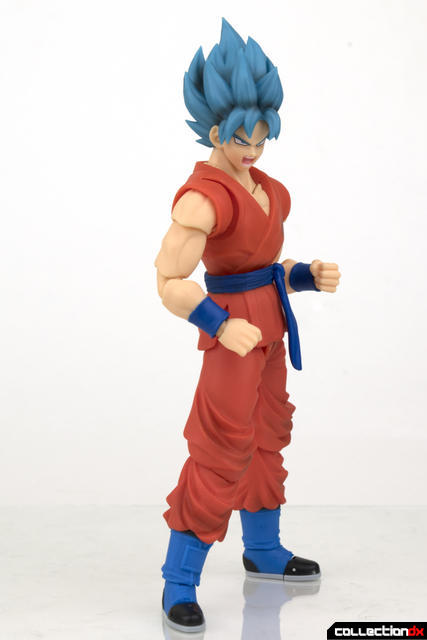 The toy features a blue hair and eyebrows, which signify that Goku has reached a higher power level than ever before and thus a new form of Super Saiyan, Super Saiyan God Super Saiyan. While the form looks rather cool, the name is pretty silly. Which is why it was later renamed Super Saiyan Blue in the Dragon Ball Super anime. Hopefully the movies will follow suit with the name change. 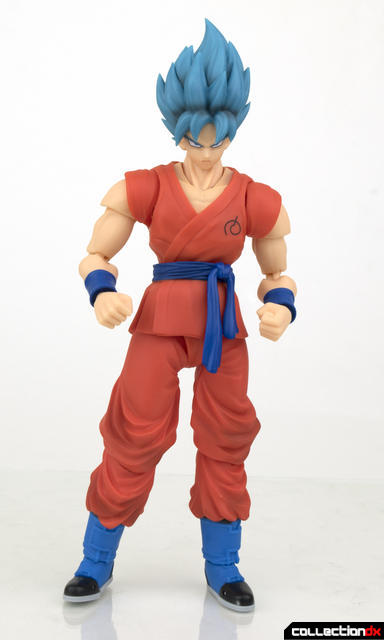 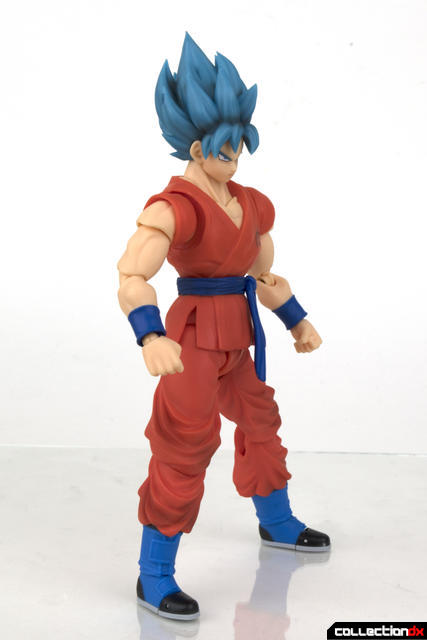 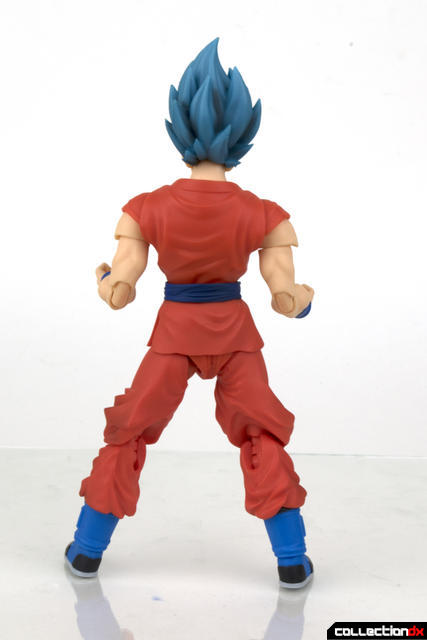 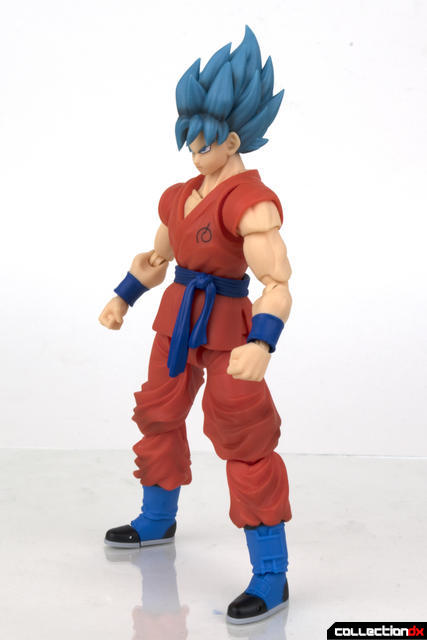 The major defining features of outfit are the modern blue boots and the symbol on his chest, which is Whis symbol. 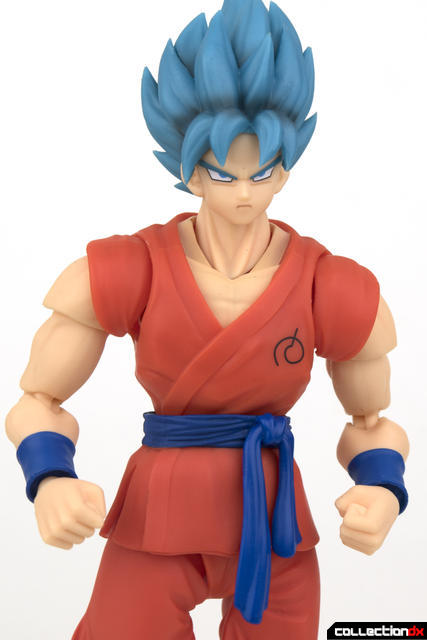 One great addition to this release is the inclusion of a second head for our Saiyan hero; it is Goku’s normal head. 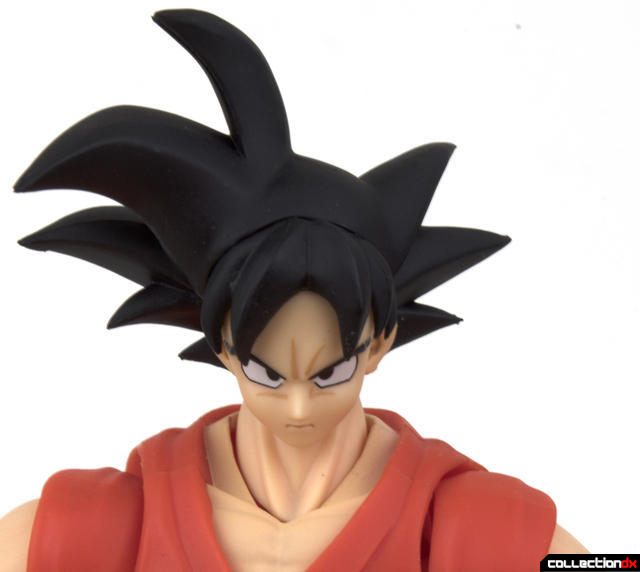 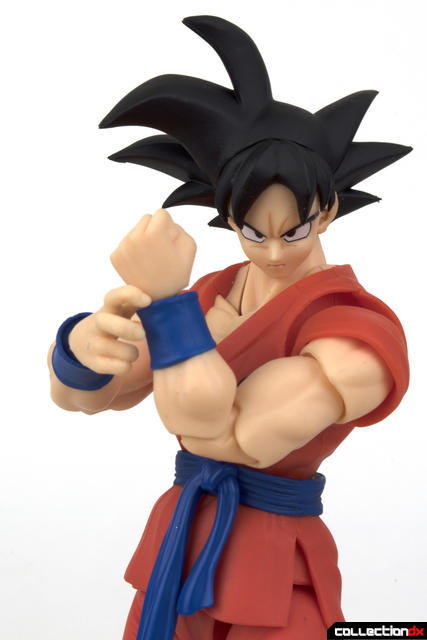 The addition of the second head is great because it allows you to display Goku in his base state, training to grow that blue hairdo. 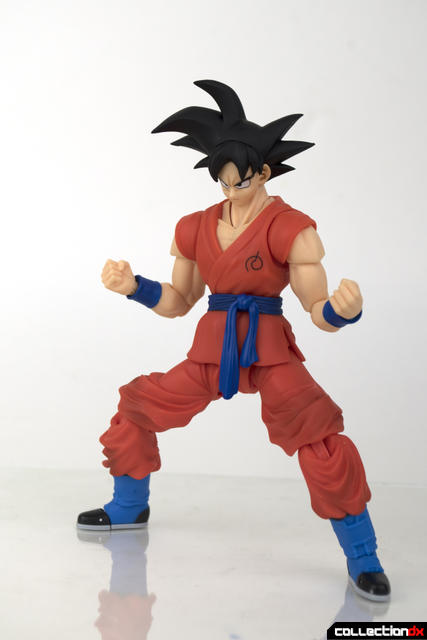 Articulation for this bad boy is superb.  It’s an S.H. Figuarts and it shows. 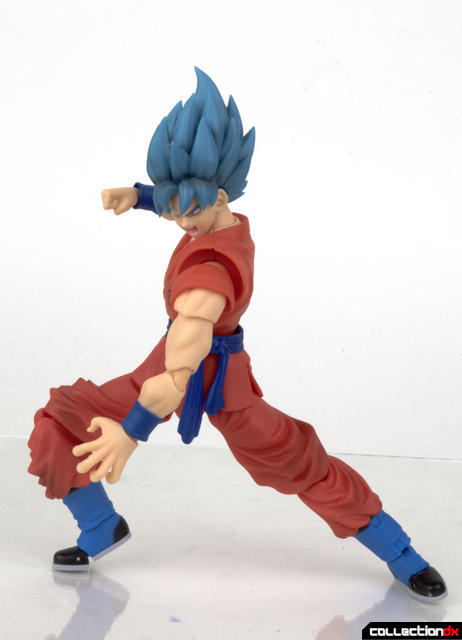 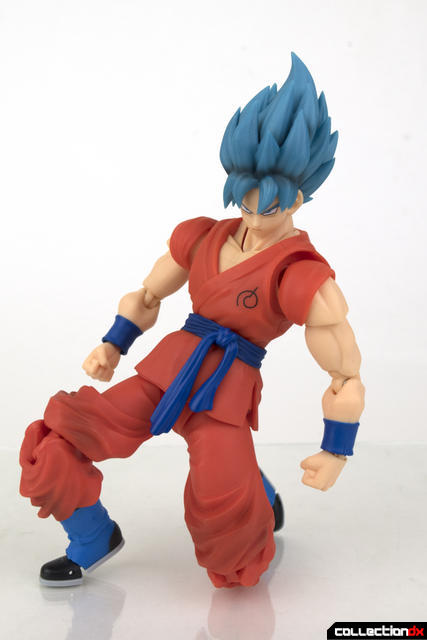 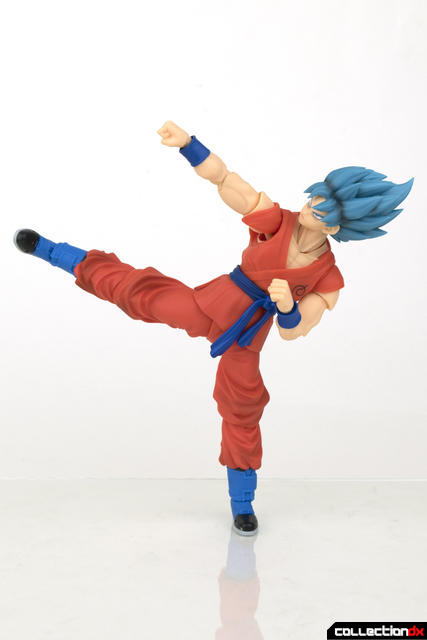 Toe hinges, ball swivels, abs crunch, and pull-out thighs: this toy has all of the signature points of articulation of the S.H. Figuarts line. So putting this toy into just about any pose, from the Kamehameha to Instant Transmission , a rather easy affair. 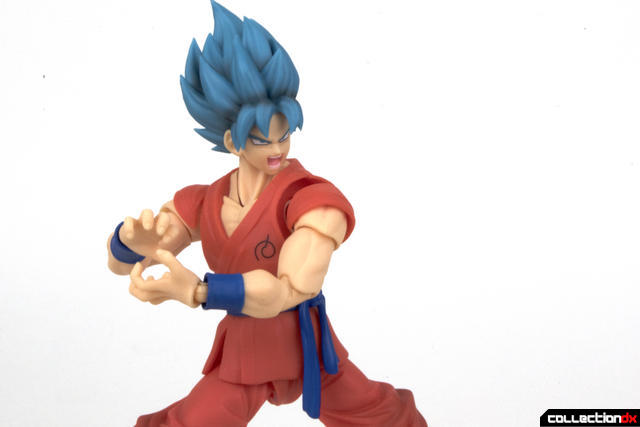 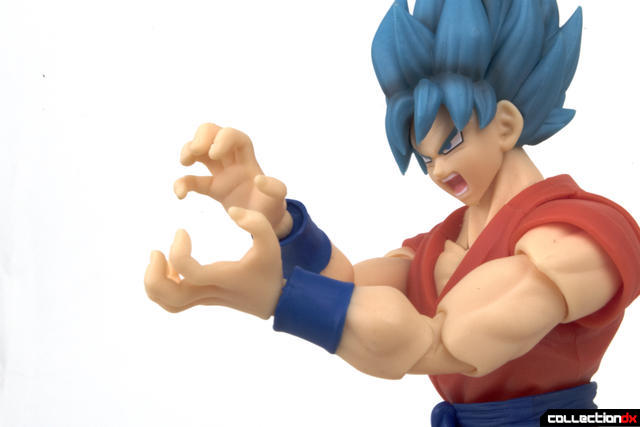 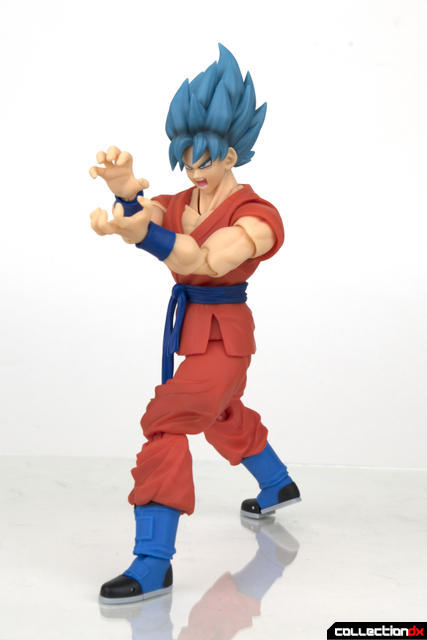 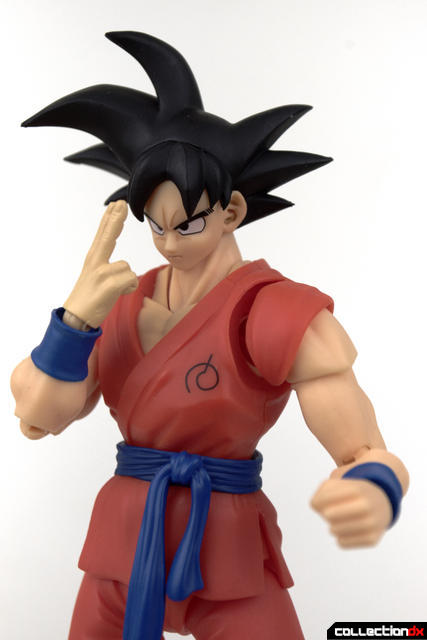 For swappable bits, Goku comes with 4.5 pairs of hands and 4 faceplates. 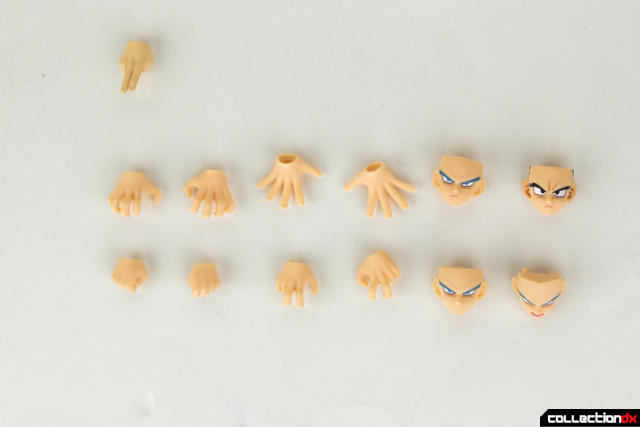 3 of the faceplates feature blue eyebrows and eyes, so they are meant to be used with the Super Saiyan God Super Saiyan head. My favorite of these is the screaming head, as it is the most expressive and lends itself well to action poses and if you have the Golden Frieza S.H. Figuarts, you can have fun making these two powerful adversaries fight in your very own home. 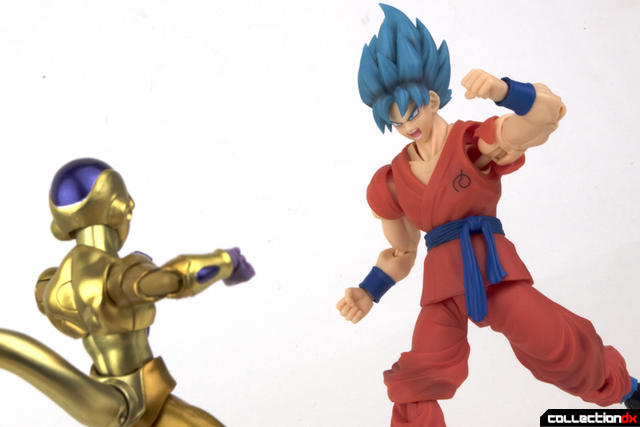 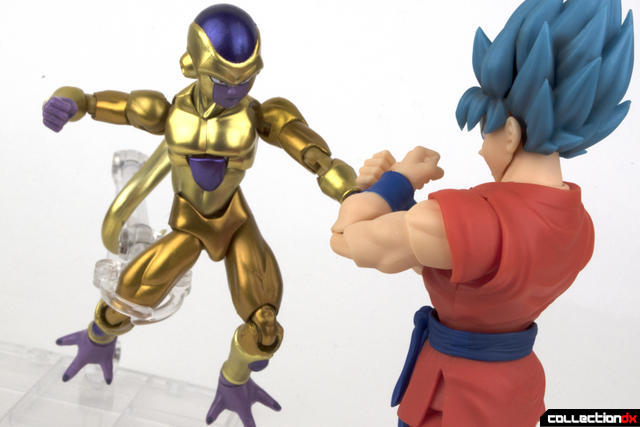 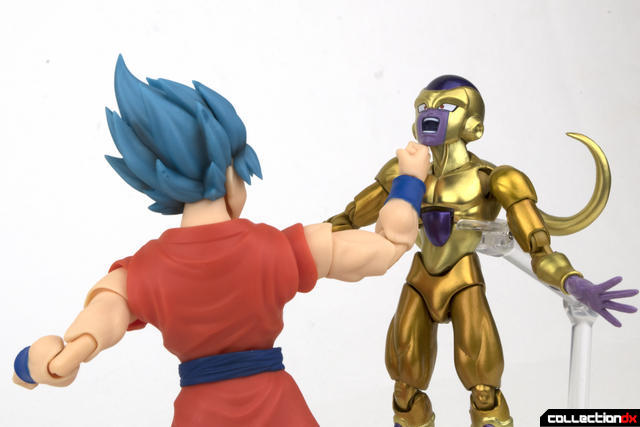 This is a great looking release with an appeal that is twofold. It is a must-have for fans looking to have the strongest form of the strongest Saiyan in their collection. 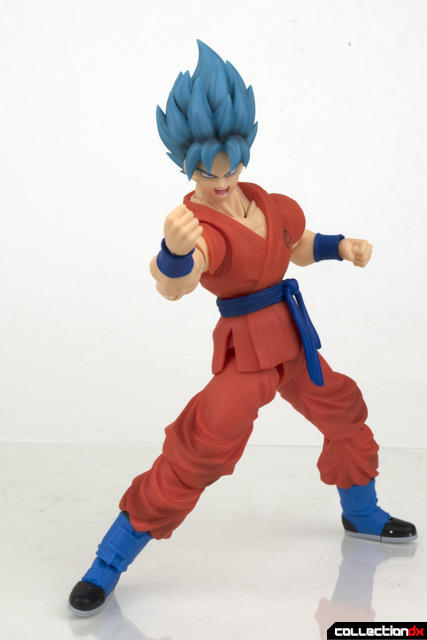 It is also great for those looking to get a base state Goku, thanks to the inclusion of the second head. 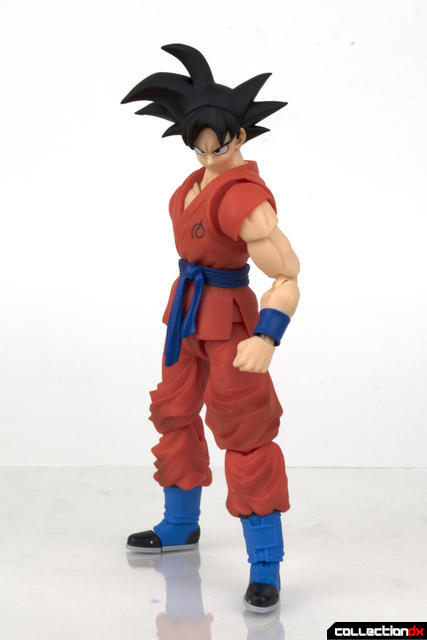 Goku powers up on CollectionDX thanks to the ToySource. You can pick up your own mighty Super Saiyan there!