People often say, "you never forget your first Shonen series antagonist." For Fist of the North Star, this honor goes to Shin, Kenshiro's former friend turned mad tyrant. In almost every way, Shin was the complete opposite of FotNS's protagonist. Whereas Ken was stoic, humble, and a master of destroying opponents from the inside, Shin was famous for being bombastic, boisterous, and eliminating his foes from the outside. Also, it was the latter's unstoppable jealously about Kenshiro's girlfriend, Yuria, that ignited a conflict that would shake the post-apocalyptic world in the year 199X.

The popularity of Fist of the North Star had an influence that can still be felt today, with long-running comics in the pages of Shounen Jump all following the general pacing and format of their famous forbear. Kaiyodo, having produced many FotNS products in the past, brought the musclebound warriors into the modern era with a subline of Revoltech figures. The so-called "Hokuto No Ken Revolution" series seemed to be quite popular, and as such made its way into Kaiyodo's "Legacy of Revoltech" reissue series. This is great for me, as I missed out on the Shin figure the first time around. 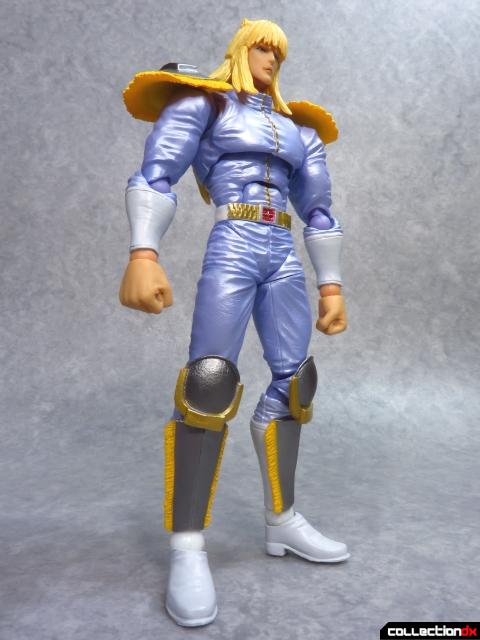 Shin stands a little under six inches tall, and is a rather handsome fellow (by this series's standards). He is pretty much a straight reissue of the original Revoltech figure, but with the benefit of the updated Revoltech joints that are tighter and far less prone to popping apart. And, for better or worse, Shin still has the odd cut-swivel style hips that most of the Hokuto No Ken Revolution figures possess. 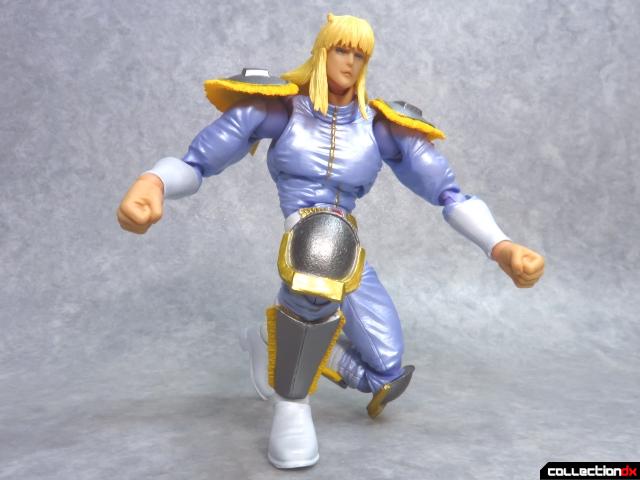 While the hips can be awkward to pose, they do a decent job of allowing for the dynamic poses Kaiyodo's action figures are known for. 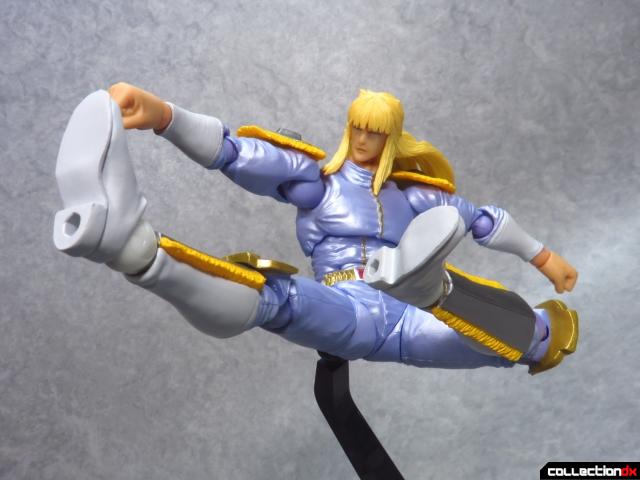 Shin kicks it old school with the classic solid black Revoltech stand. His iconic flying kick of immeasurable kung-fu power is easy for the figure to pull off, though thankfully this Shin can't make people spontaneously bleed from their elbows and knees at the slightest touch. 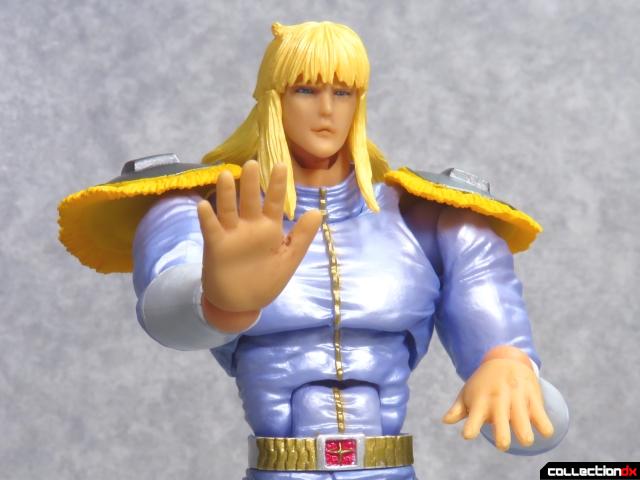 Shin comes with four sets of hands that plug onto the small Revoltech joints in his wrists. Weirdly, it seems like the newer joints have posts that are a bit too long for the open palm type hands, so I ended up just clipping a chunk off them for a better fit. It's not like Kaiyodo themselves haven't done this with with other Revoltech figures before. There's even a little line on each joint showing where they can be cut. 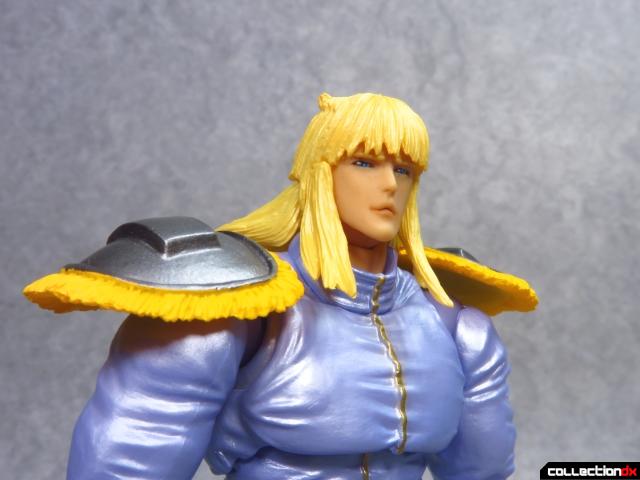 His flowing golden locks are nicely sculpted, and feature a hinged mullet to allow for a good range of neck articulation. The expression on Shin's face is a strangely cheeky smile, with his luscious lips pursed in a 'ω' manner. Sadly, this line pre-dates the popular practice of including multiple expressions with each figure, so Shin has to make do without the mad grin he often had in the series.

As an aside, it amazes me to think about how many fighting games have a character with short brown hair being the rival of another with long blonde hair. Street Fighter's Ry and Ken, Guilty Gear's Sol and Ky, and even Tekken's Asuka and Lili all follow this motif. 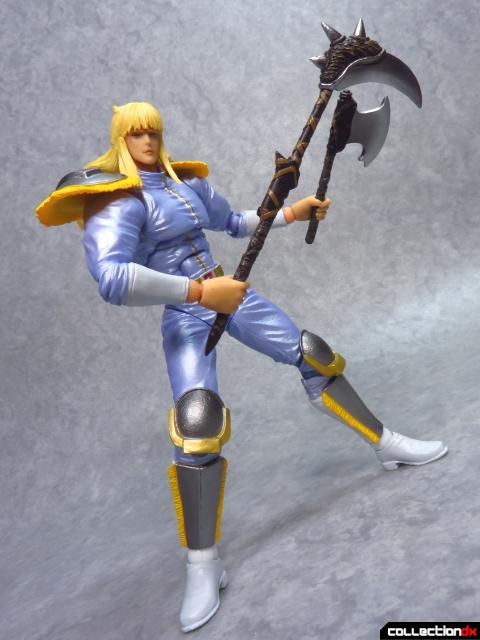 For accessories, Shin comes with several sets of hands, included a pair for holding his wicked post-apocalyptic weapons. These are for all the times he'd rather not stain his hands with the blood of unworthy opponents. You can also give them to other Revoltech figures to enhance their "Mad Max" flavor. 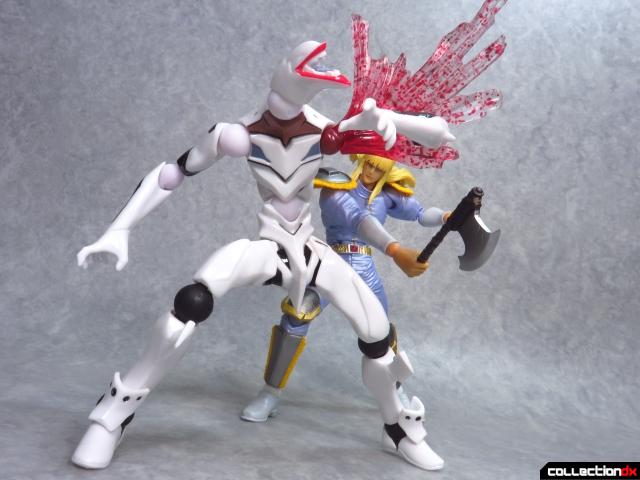 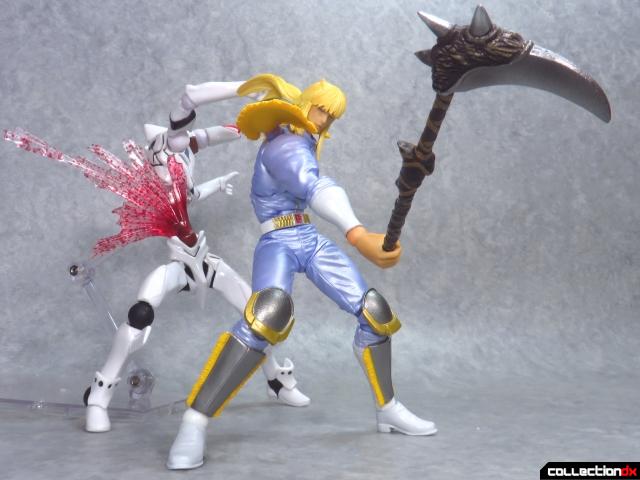 Shin makes dismembering other Revoltechs both bloody and fun! 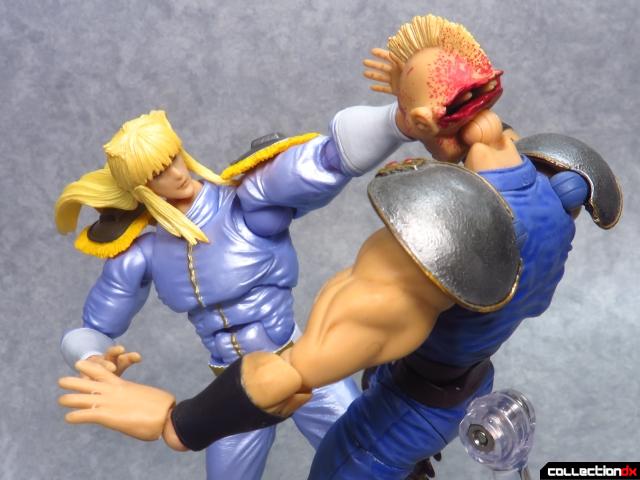 When Shin needs to demonstrate the power of Nanto Sei Ken, you can use this bloody head accessory. The part is supposed to be used with the "Exploding Zeed Gang Member" Revoltech figure, but anything with a compatible neck joint will do. 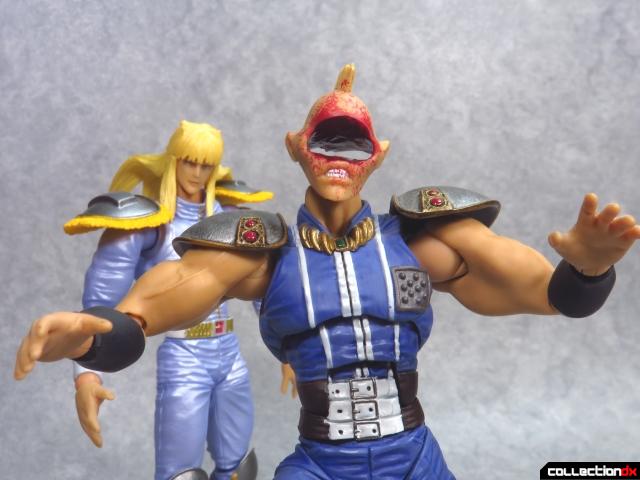 The power of Nanto Sei Ken allows Shin to pierce his hands through anything, which I honestly think is way cooler than Kenshiro's body-exploding Hokuto Shin Ken techniques. 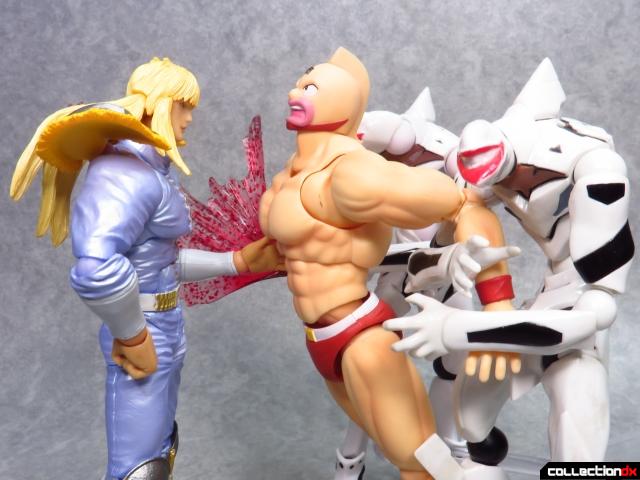 "Yuria... You can end all of Kenshiro's suffering if you'll just say you love me!"

"Huaaaaaaaghh! What are you talkin' about you weirdo? My name is Kinnikuman, not Kenshiro!" 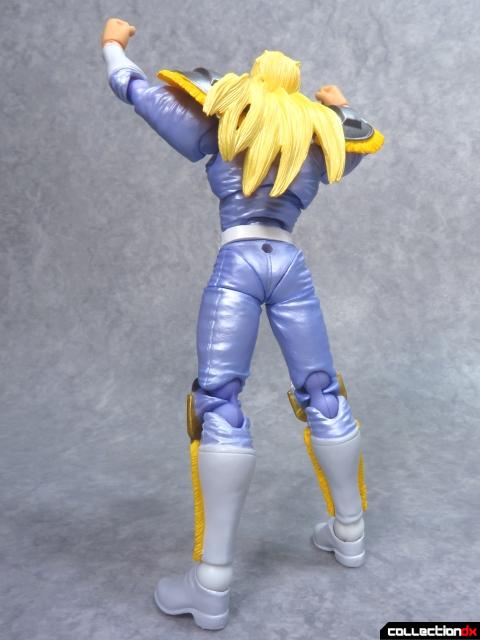 "Kenshiro! Let it be known that every ill deed I have done was all for YUUUURIIAAAAAA!!!"

The Legacy of Revoltech Shin is a welcome re-release of a solid figure. The only major downside to this version is its price, as the Legacy version is a full 1,529 yen more than the original release from about seven years prior. While this does drive the toy's appeal further into the niche category, I feel the Revoltech Shin is the kind of toy that both Fist of the North Star enthusiasts and Revoltech aficionados can appreciate.