Transformers: Combiner Wars has been doubling down on repainted figures with new heads, with the recent Legends Class Rodimus being a reuse of Decepticon Blackjack. All the good word about Blackjack (and StarSaber's review) intrigued me, but a turbo-revvin' young punk redeco really sealed the deal. 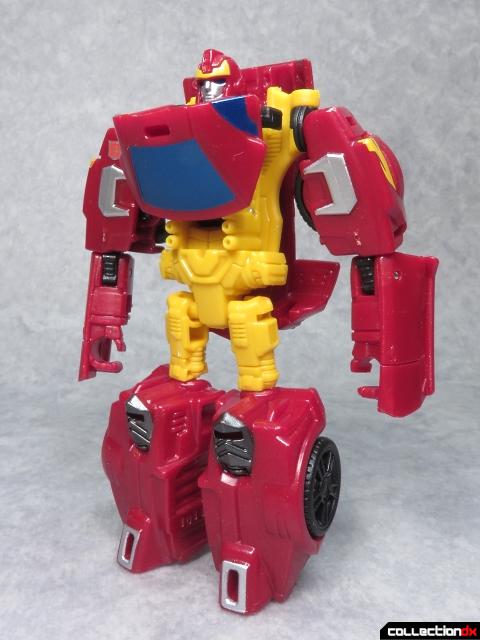 This palm-sized Chosen One stands roughly three and a half inches tall, and is an attractive little robot car man. 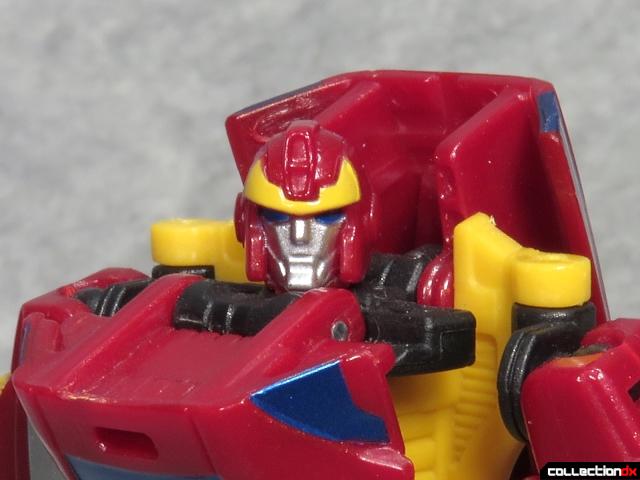 The new head is a proper Rodimus noggin, and goes a long way towards making this figure feel like more than just a repaint. 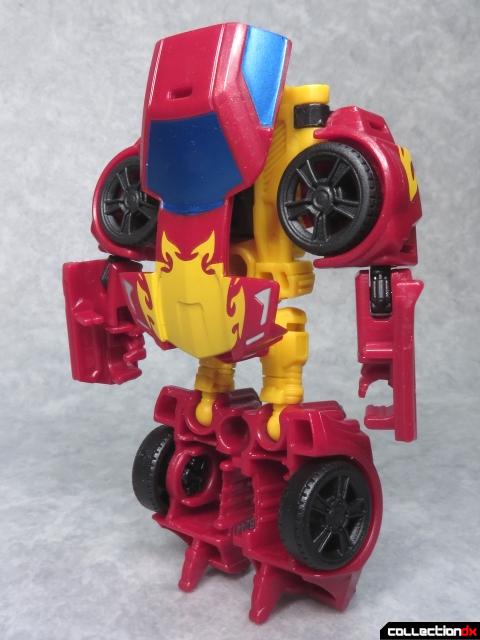 Like Blackjack, this figure began its life as a modern update of the vacuum cleaner shaped baddies, the Battlechargers. Details like the car parts hoodie and general shape of the figure reinforce this intent, but honestly I think the mold was also designed for double duty as small Rodimus too. The position of the vehicle mode wheels on his arms and legs is still keeping in line with the G1 toy, and the windshield chest could be made to look like a proper Hot (B)od with the right stickers. 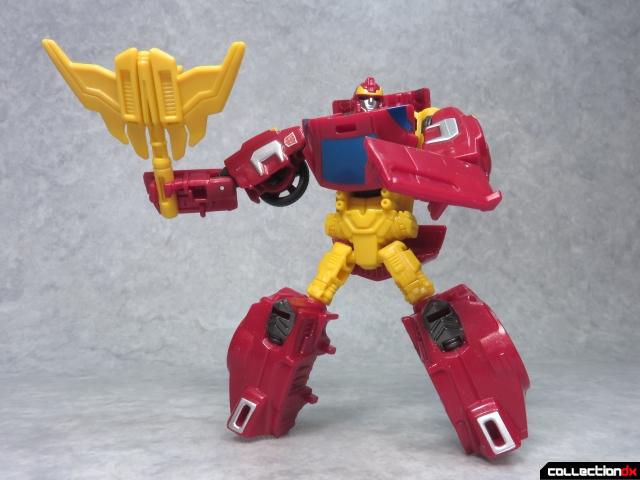 Even the spoiler battleaxe is suspiciously Rodi-like, and wouldn't have been necessary for a Battlecharger or Blackjack's Menasor chest plate mode. 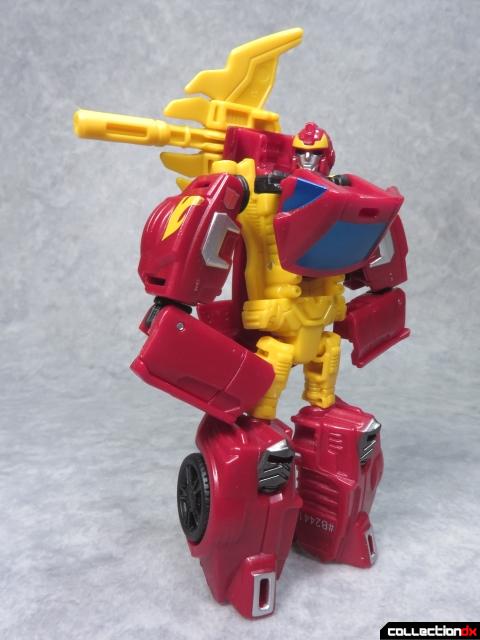 Sadly, Hasbro poked a hole in my theory about this mold's original destiny as a Rodimus figure with its inability to mount the spoiler in the proper robot mode position. It's a rather baffling omission, as just one more tab on the spoiler itself would allow the piece to mount cleanly on the toy's back. 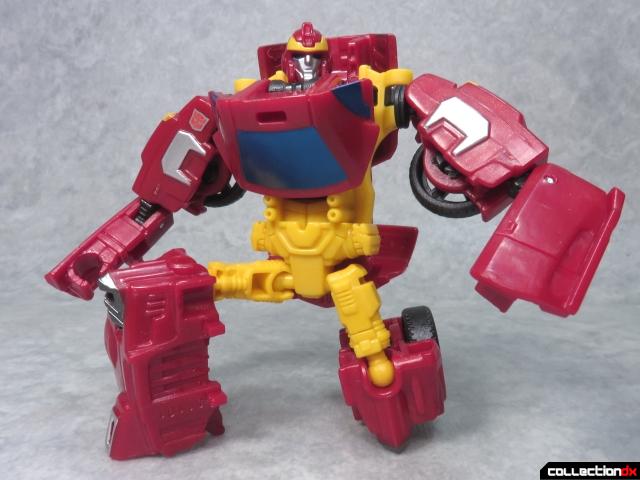 Accessory weirdness aside, Combiner Wars Rodimus is a fun piece of hand candy. The little Legends Class sports car is super poseable, with the only major articulation deficit being the lack of a waist joint. 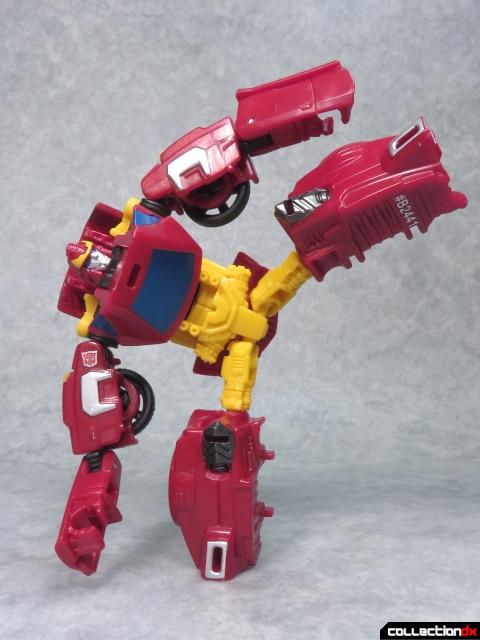 And his joints are stiff enough to allow for the full Van Damme. 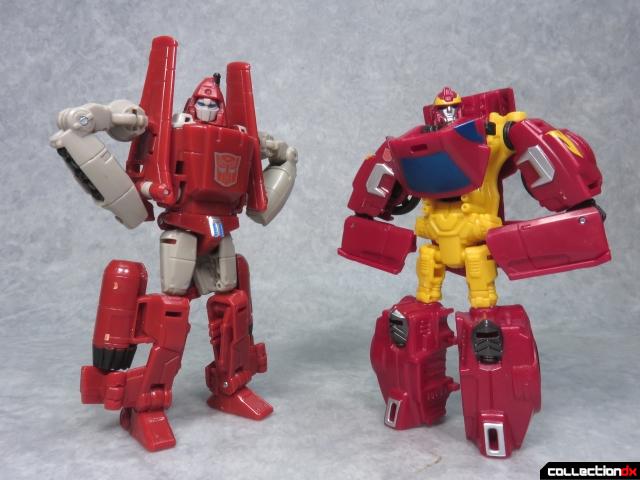 He's up there with the likes of Powerglide among excellent (and boastful) tiny Transformers. 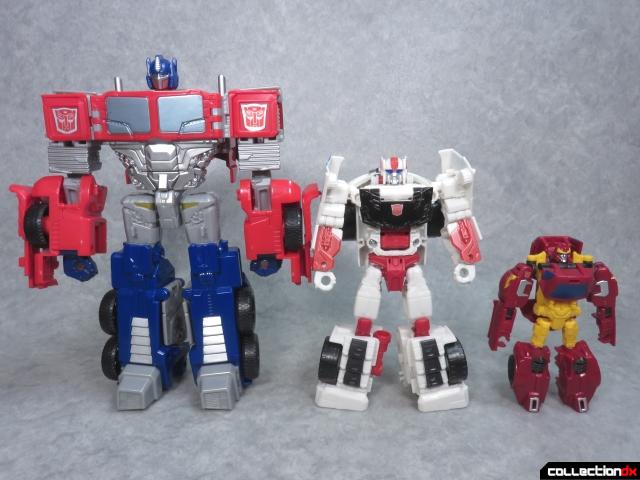 Here is Rodimus alongside fellow Combiner Wars Transformers. Both Optimus and Streetwise represent the larger toys that still follow the general play pattern of the line. 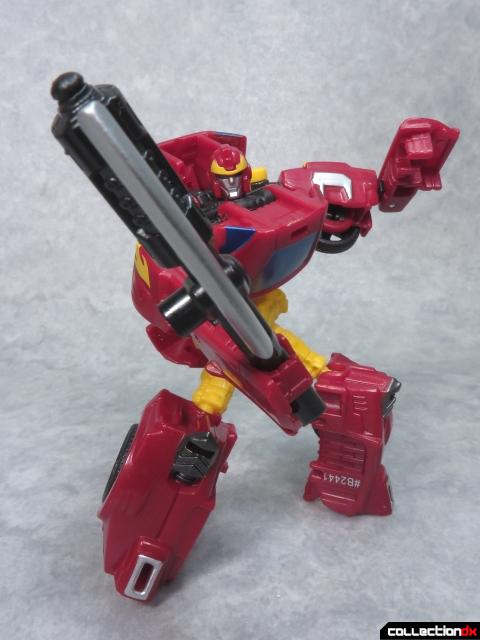 And Rodimus's hands are compatible with any 5mm post-using weapon, so he's got an entire arsenal available to him. 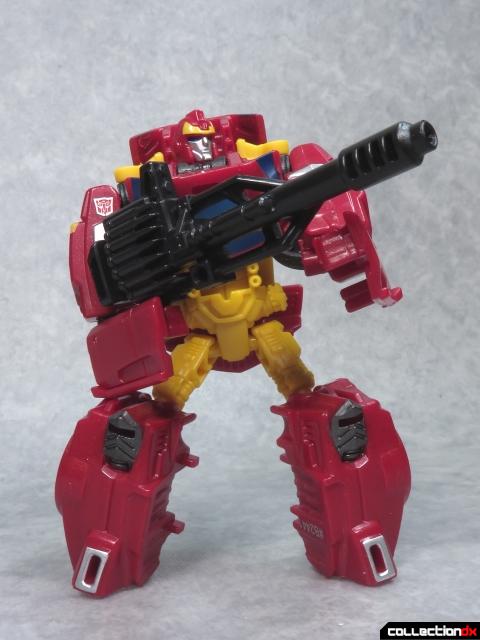 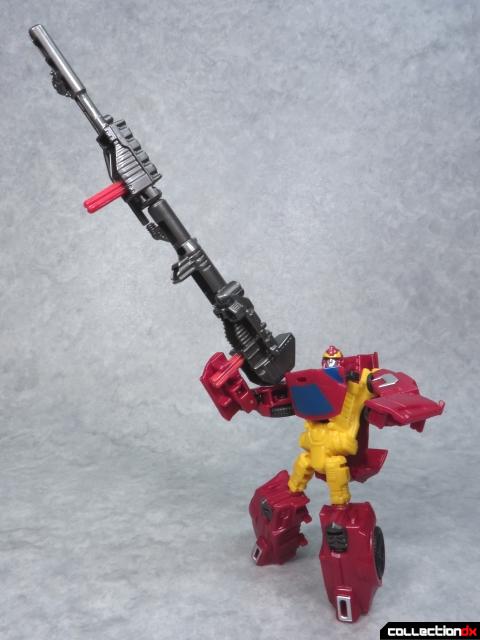 Or if you're feeling adventurous, just give him Optimus's huge two-piece rifle. 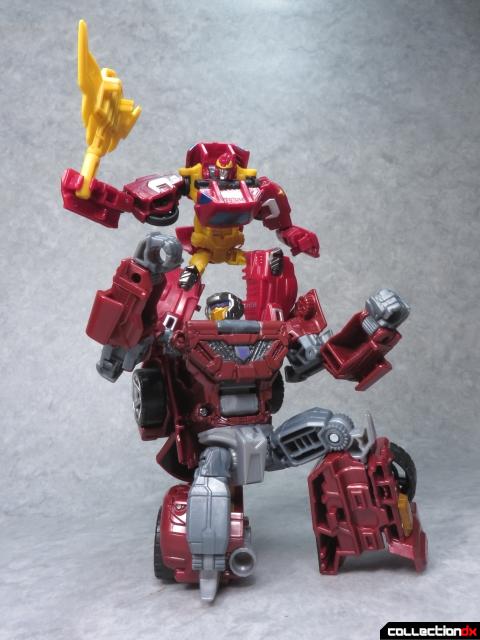 "Cheer up, loser! I'm about to let you vent your gripes through a gouge in your shoulder!"

"Get off me, you pint-sized punk!"

The battleaxe is a neat idea, but I find it looks goofy, even in the midst of a brawl. 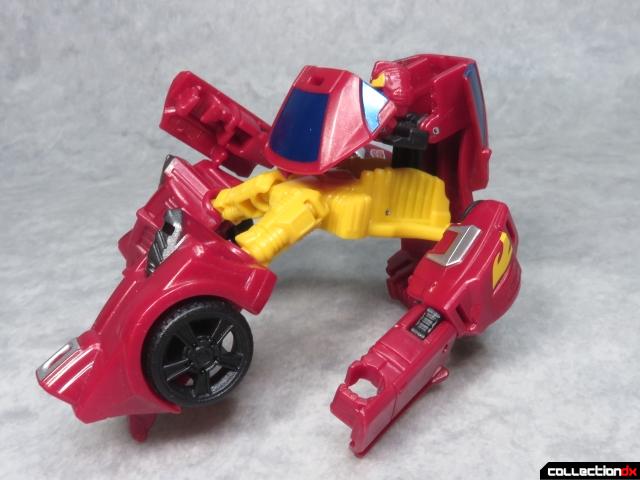 Transforming Rodimus to vehicle mode is a short but genuinely clever affair. The whole cabin and hood flip around on a small swing arm to put everything in the right place for a cool car. 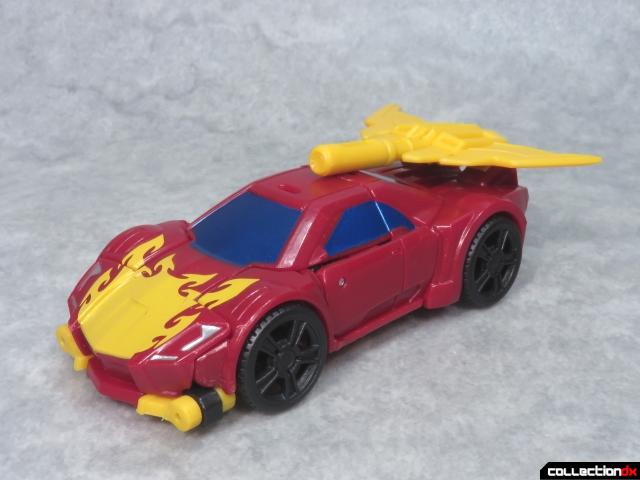 This Legends Class sports car makes for a pretty good Hot Rod, though it lacks the trademark exposed engine. Astute readers may notice a symbol sized indent at the front of the hood, but there is no Autobrand to be found. Interestingly, Rodimus's instruction sheet depicts a small Autobot symbol in that exact spot. 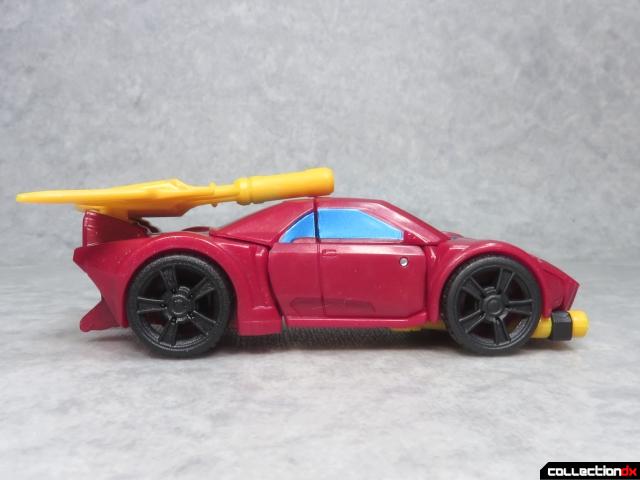 A view from the side shows the somewhat flawed way the battleaxe mounts as a car mode spoiler, as it can't quite rest flat due to how the handle ends up hitting the vehicle's roof. Again, though, neither a Battlecharger nor a reborn Decepticon Micromaster demands the inclusion of such an accessory, which gives some merit to my theory that this toy was always intended to be a Rodimus figure. 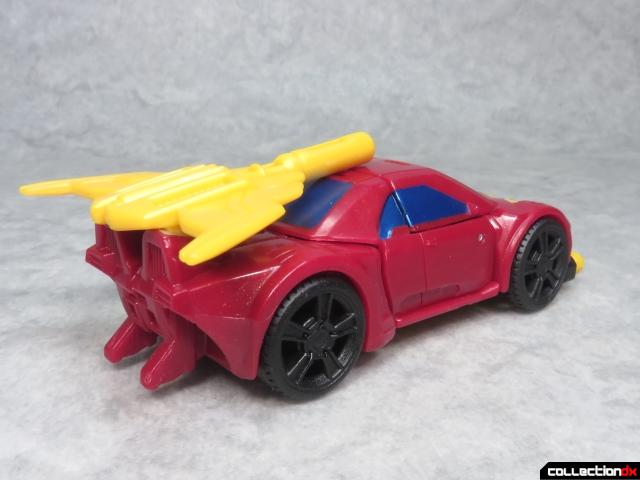 The lack of painted hubcaps makes the figure look a bit too cheap for its price. However, this is nothing a silver sharpie can't fix in about five minutes. 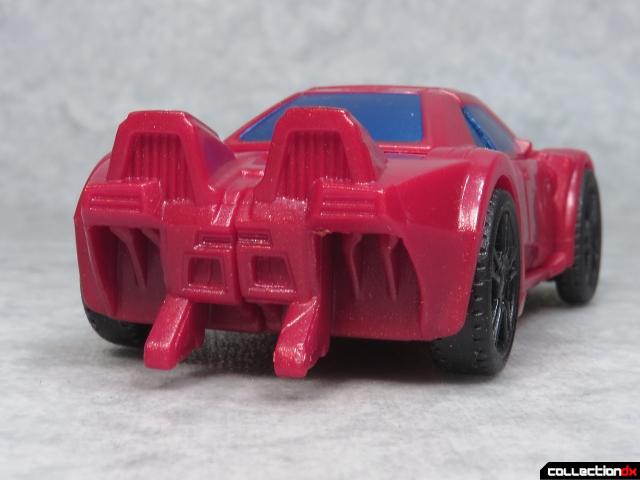 Speaking of paint, the back end of Rodimus's car mode could really use some picked out tail lights and exhaust vents. There's a good amount of detail in here that's begging for highlights. 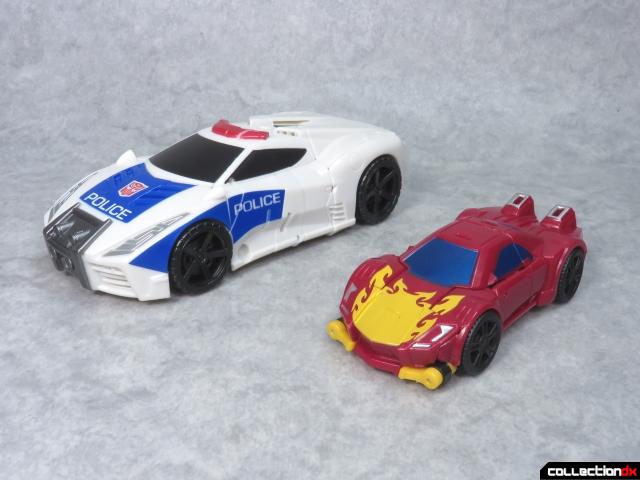 And as expected, the Legends Class automobile is out-of-scale next to a normal Deluxe Class cruiser. 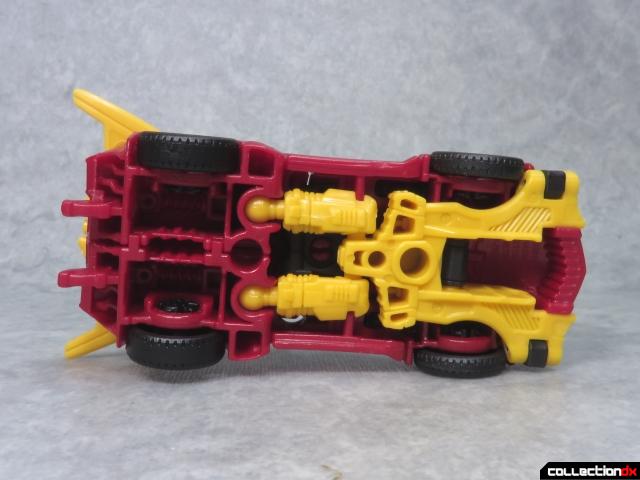 Like Blackjack, Rodimus has a pair of holes underneath so you can use him as a chestplate for Combiner Wars Optimus (or a remold thereof). 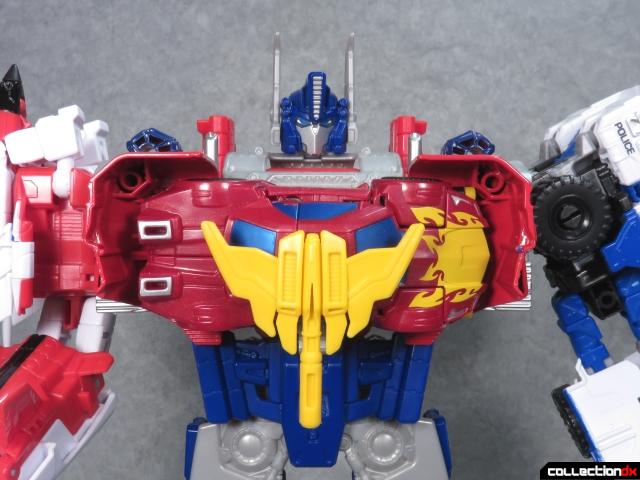 Unfortunately, the pegs on the big boss's chest have some extra ridges on them that prevent Rodimus from firmly plugging in. If you're really into this gimmick, you can sand the edges of the pegs down to allow Roddy to take a few bullets for Prime. Note that for this mode, the spoiler uses a pair of roof slots to affect a proper super robot crest, as well as lock Rodimus in car mode. 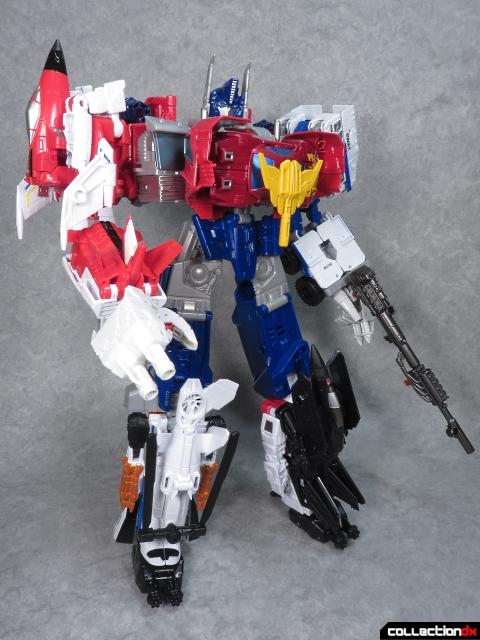 Now Ultra Prime has got The Touch close to his bosom at all times. This is a good thing, I guess? 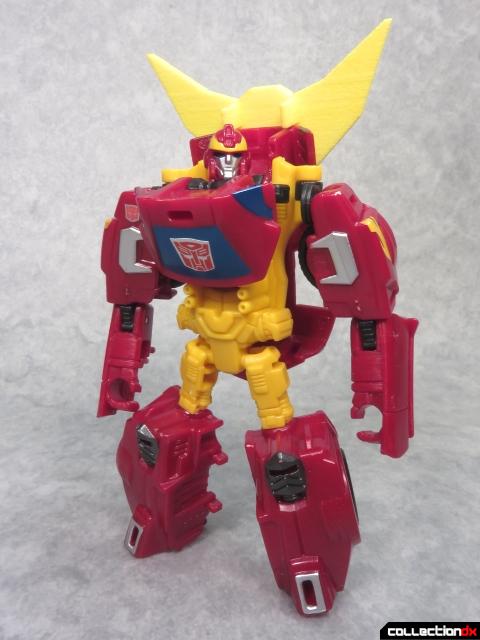 While I do enjoy the base figure as a fun lil' Transformer, I couldn't sit idly knowing that one of my Rodimii lacked a proper back-mounted spoiler, so I made my own on Shapeways. I also used a few spare Autobot symbols from Reprolabels to sorta emulate Rodimus's chest emblem. They are also offering a full flame set for the toy. 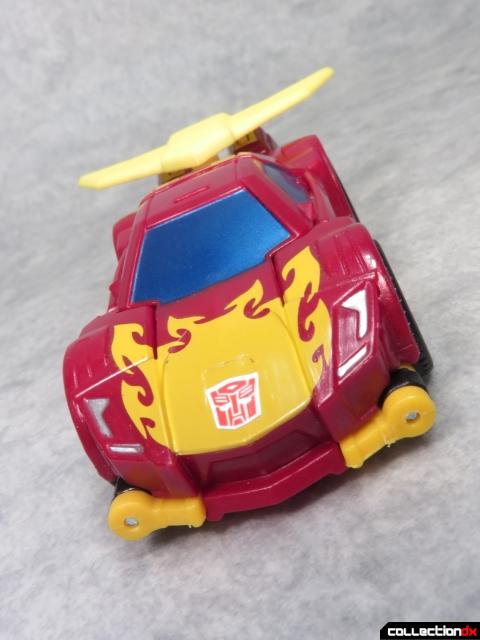 Personally, I am fine with doing a few touch-ups to the figure in order to make this Rodimus feel more complete. It's a neat enough toy as is, but Roddy enthusiasts may find it a bit lacking. That said, I'd be interested in reading the backstory for this toy, as the little details of its design hint at a much more accurate Hot Rod experience that didn't make the cut.

4 comments posted
This guy's been a peg warmin'

This guy's been a peg warmin' at my local Kmart for like 6 months.
I've been resisting him because I sold a bunch of TFs and only kept my favorites a couple years ago,and haven't collected since. I know it's like when I used to smoke cigarettes though,if I get this one,I'll have to get the Optimus to wear him,and if I get the Optimus,I'll need four guys to be the limbs.......

Just got back from Kmart,just saw him again. 2 more observations. One,the side view you show here of the spoiler kills it for me. Looks like some other figure's accessory you just laid down on the car.

And also,for nolstalgia's sake,since it's been a year or two since I brought this up on CDX,this thing is 10 bucks. That's too much for a bad 3 inch figure. A good one,sure,but you're asking me to pay twice what I paid for an enermadatron era figure of this size,AND it has glaring problems? No thanks. For 2 of these,I may as well get a marvel legends or Star Wars Black that's actually cool.

Anyone have Groove yet? He seems pretty tempting,and it's a character that hasn't been done to death.

If you mean the Legends-figure, I've got him. He's pretty cool in robot mode (albeit lanky and slightly awkward), and how he transforms is enjoyable too. I haven't merged him and the other Protectobots into Defensor yet though, so I can't confirm if he's as good at making a chest plate as everyone says he is.

Yeah I haven't bought toys in forever I kinda want to splurge on Denfensor. Never had him as a kid.