I'm a big fan of Astromech Droids, and at one time I had a vision of collecting every Astromech that Hasbro put out. I quickly realized that was a nigh-unobtainable goal so I resigned myself to picking up the cool unit here and there.

When Kaiyodo announced their Revoltech (or Revo for short) version, I admit, I was curious. How could they use Revoltech joints in a design like R2-D2? The design doesn't exactly lend itself to extreme articulation.

The box is large and dark, which seems to be the thing with Star Wars packaging (see Star Wars Black). The R2 unit is displayed prominently in a big window, with a covered black space to the side. I assume all the parts and accessories are under there. 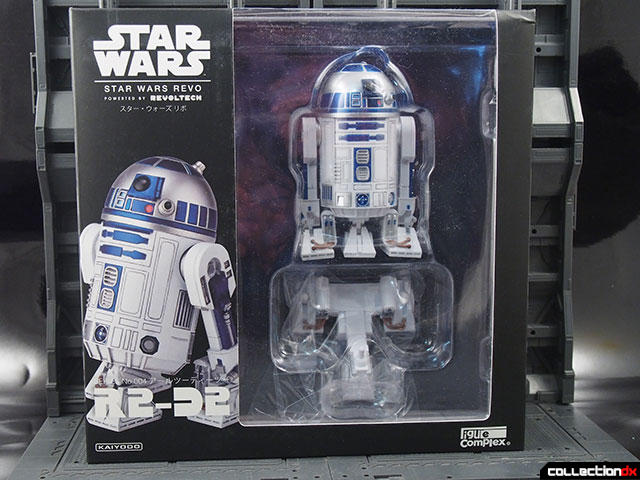 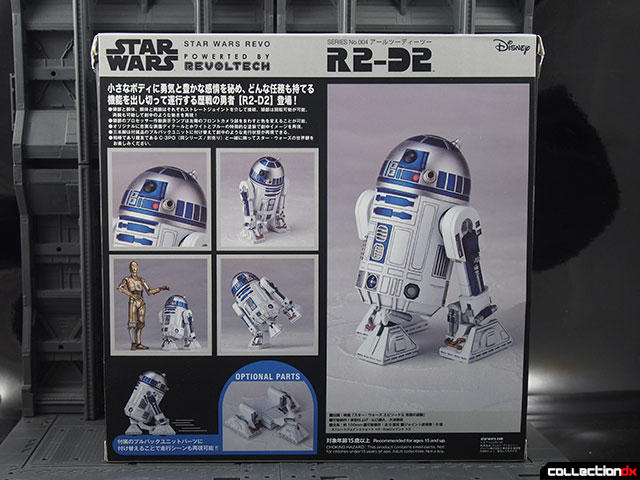 Uh... where are the parts? Where are the instructions? That's right, there aren't any. You get only R2 and the pull back motor baseplate. Perhaps all the gimmicks are self-contained in the toy itself. 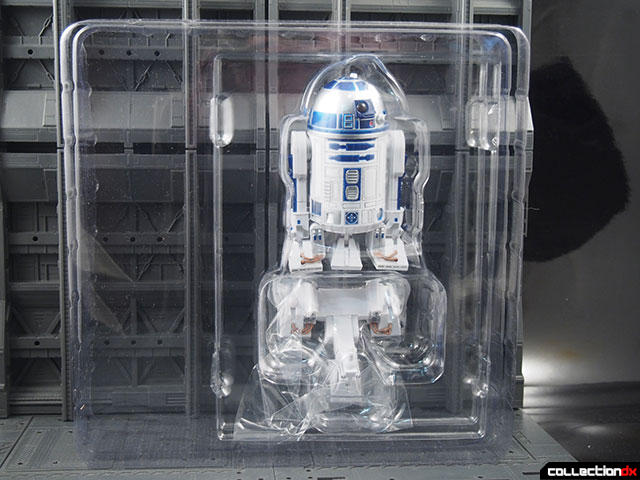 Sad to say, there are almost NO gimmicks with this R2. No pop up lightsaber or sensorscope. No articulating arms. What you do get is a rather nice R2 with some less-than stellar joints. At least it looks good. 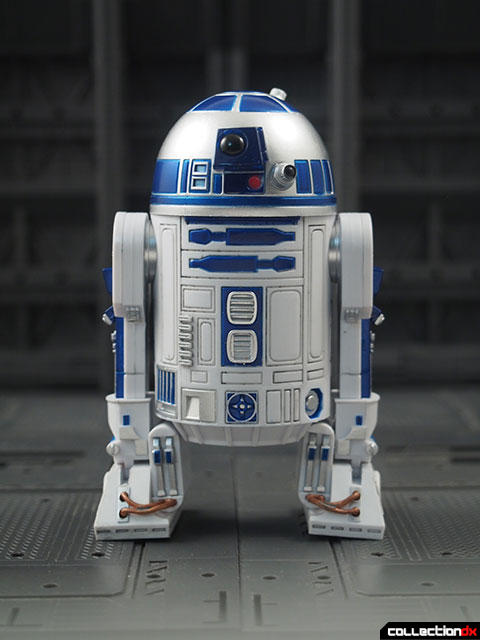 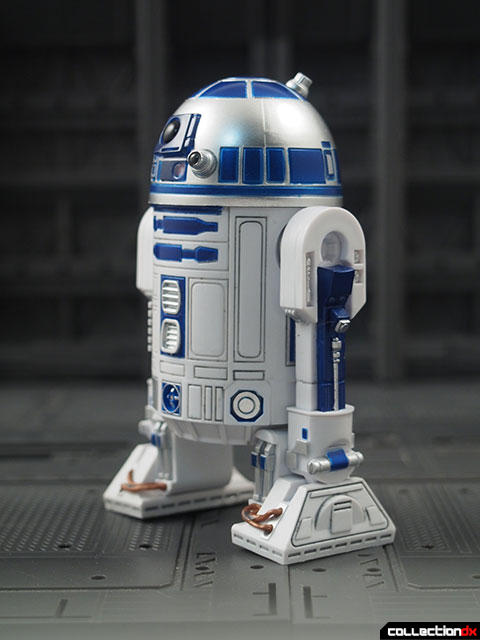 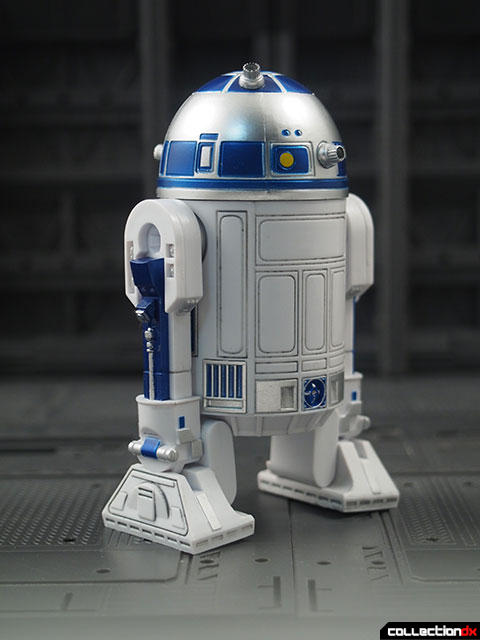 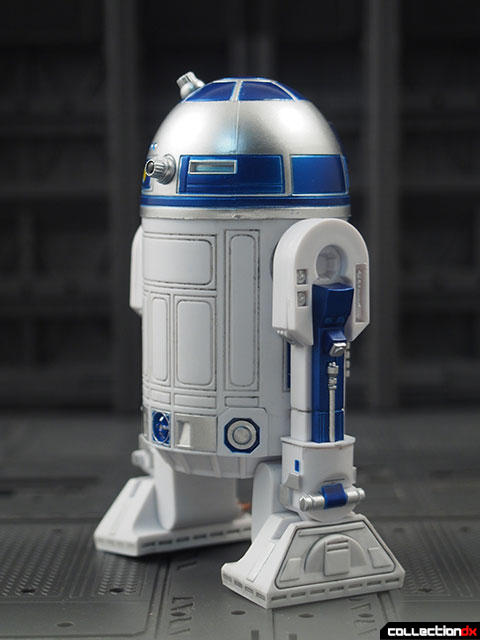 The first interesting gimmick is the ability to change the color of the light on the front of R2's face. Turning the dial will change it from red to blue. Keep in mind, it doesn't actually light - that would take effort on Kaiyodo's part. 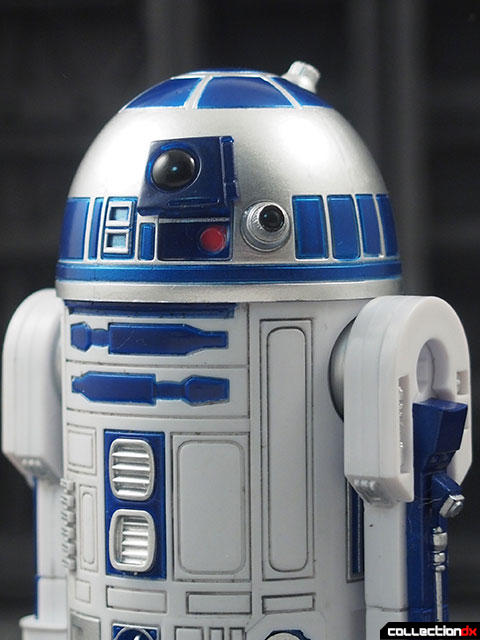 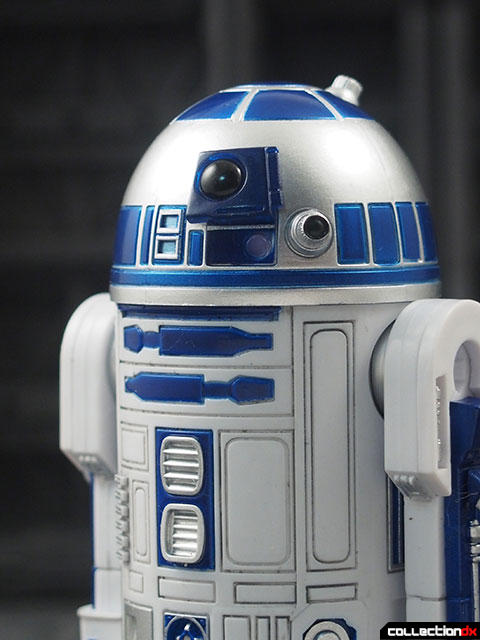 Then there's the third leg. Officially, R2 stores the third leg up in it's cavity so it can be deployed at a moments notice. Apparently Kaiyodo thought there wasn't enough room in the hollow plastic body and decided to make it attach with a faux Revoltech joint. When I mean faux, i mean that it's just a peg in the shape of a revoltech joint. It doesn't actually bend. However the foot part IS connected with a proper Revoltech joint. 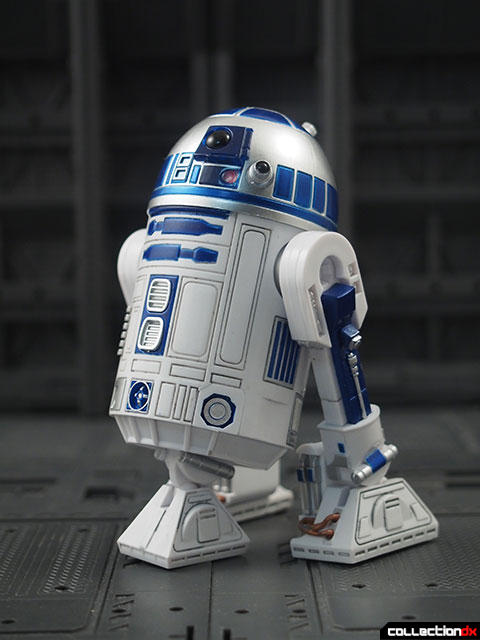 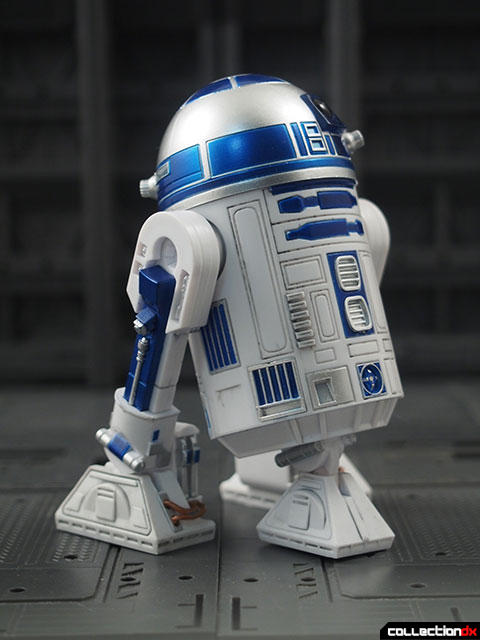 You can see the breakdown of parts here. Note that the legs, head, and center leg use fake Revoltech joints. 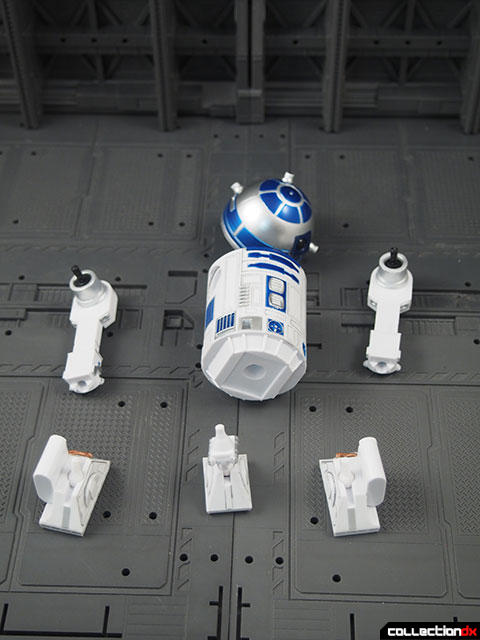 I can't even reconnect the items back into an interesting combination. 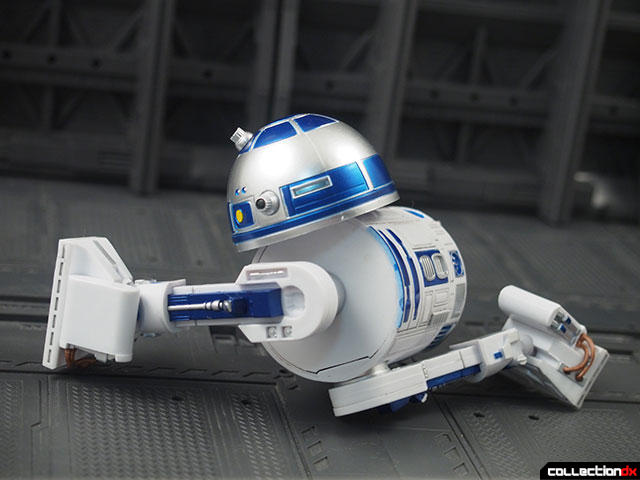 If you take out one of the foot joints and rotate it, you can do this. 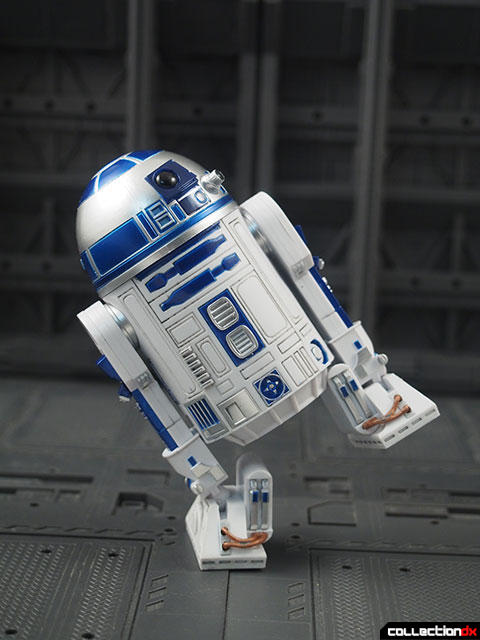 The main gimmick of this release is the pull-back base. It's a clunky, solid piece that has one fake and two real Revoltech joints. I'd tell you to remove the feet of R2 and attach here, but the feet have already fallen off by now due to the loose connection points. 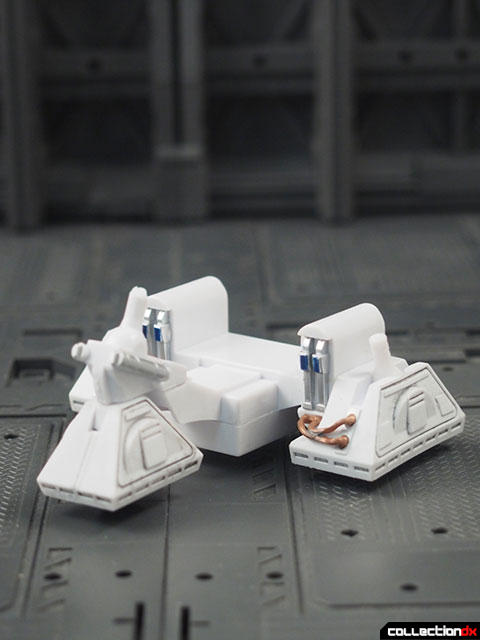 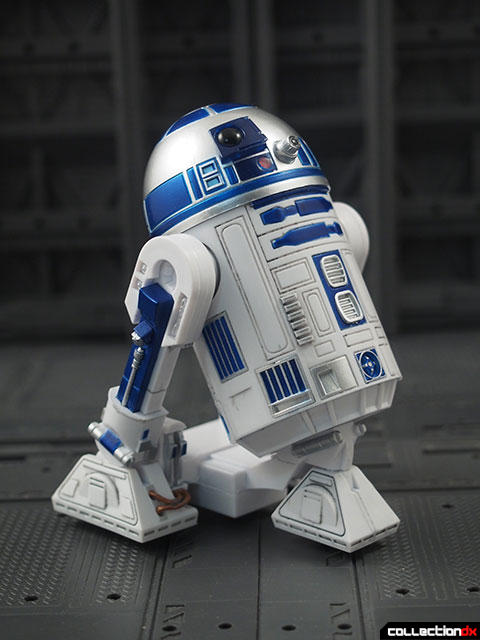 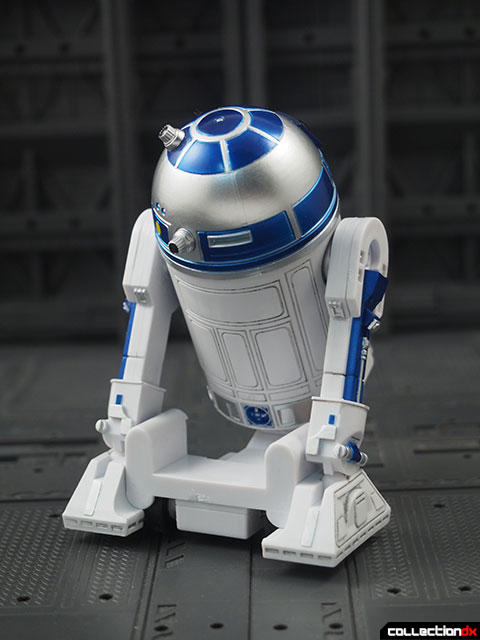 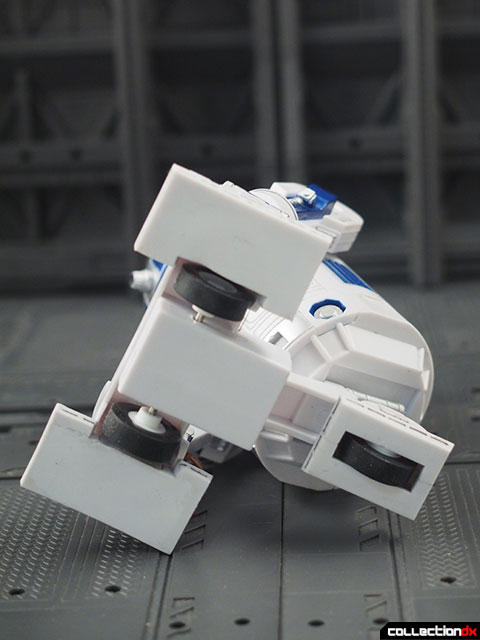 So here's the deal - Yes, it looks nice. But for almost $50 USD, it doesn't do much of anything. It would have been so easy to give it some panels that opened with little Revoltech Joints, made the leg retractable, made the regular feet have rollers, use actual Revoltech joints instead of dummy plugs, hell, even electric lights or sounds.

At least you can mix and match with other Revoltechs. 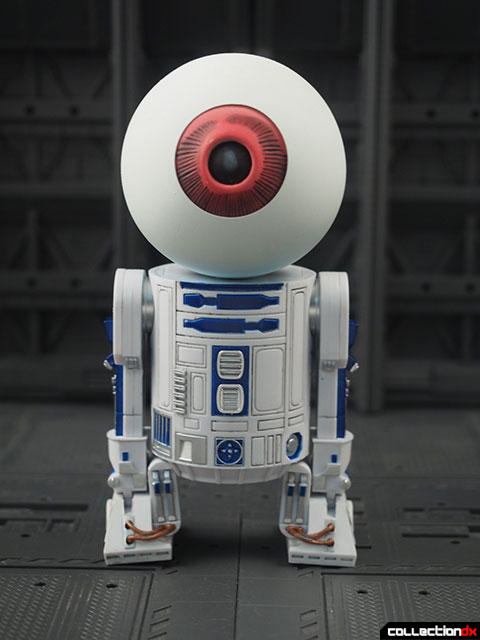 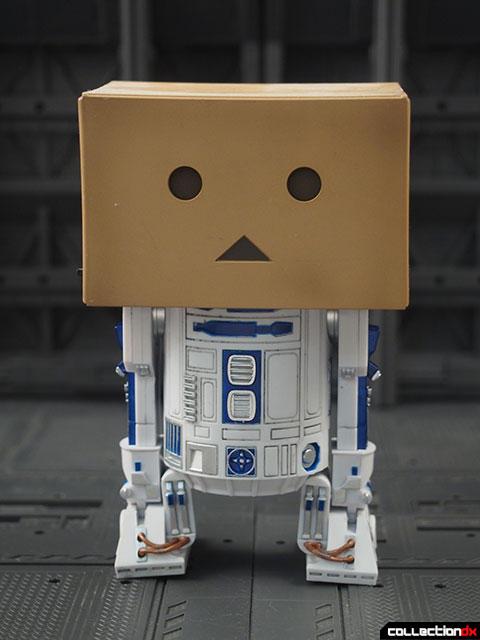