Shuriken Sentai Ninninger is the current Super Sentai series. The show features a ninja and shuriken theme. Not keeping with the theme, the motifs for the mechas all over the place. Following up the release of the eclectic mix of mechas known as the Shurikenjin, Bandai have produced toys for the first two support mechas of the Shuriken Sentai Ninninger. The support mechas are part of the Otomonin line, which translates to “companion ninja”. 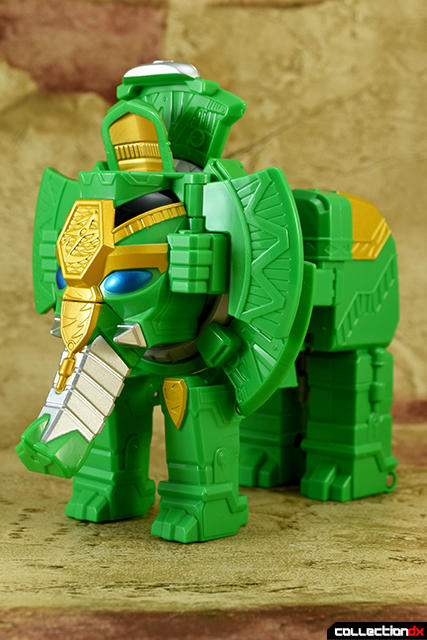 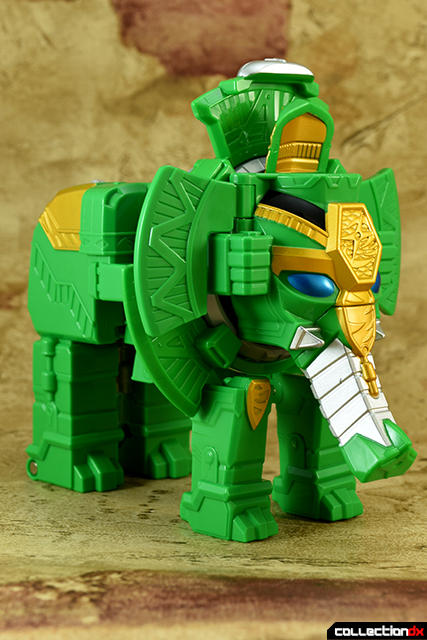 The animal form of Paonmaur is that of a blue-eyed green elephant with  The toy has a lot of detail molded into the plastic. 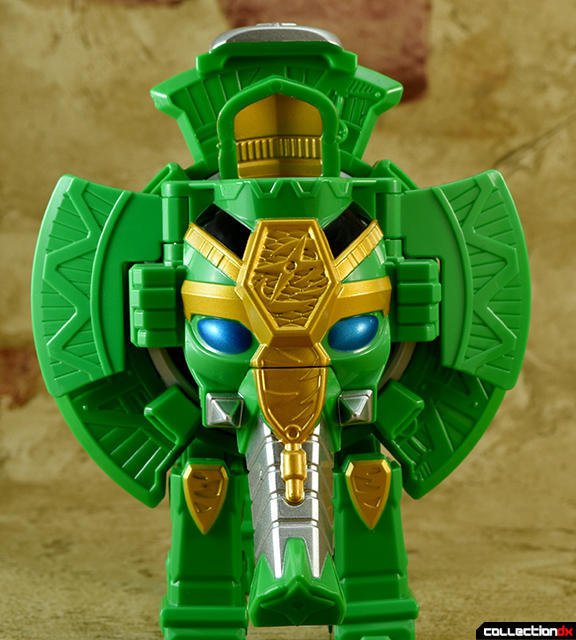 The head even features a headdress, with the Ninninger logo on the forehead piece. Another nice detail is the shuriken on the tip of the trunk.

The rear portion of the elephant is more function than form, as it doesn’t have much paint or detail on it. 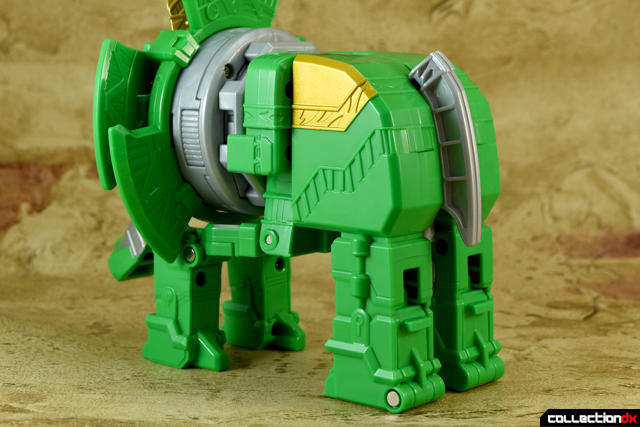 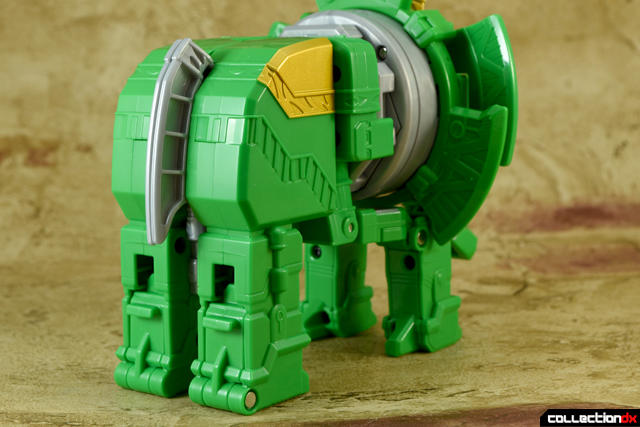 My favorite thing about Paonmaru is that it is currently the only mecha in the Ninninger line to make use of the shuriken and its holder in a way that is very practical. 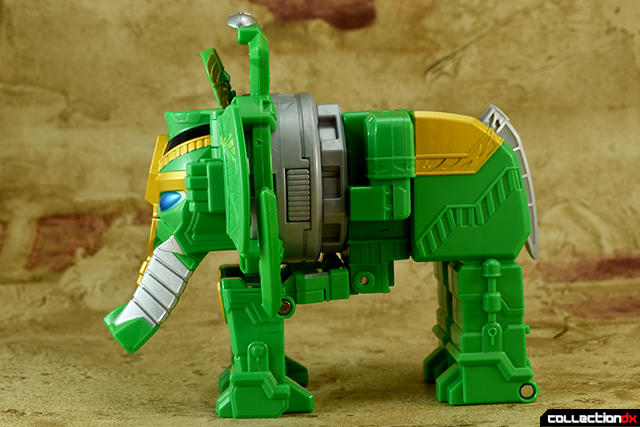 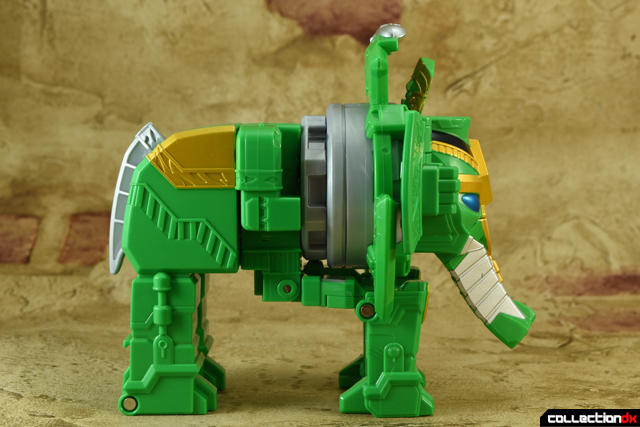 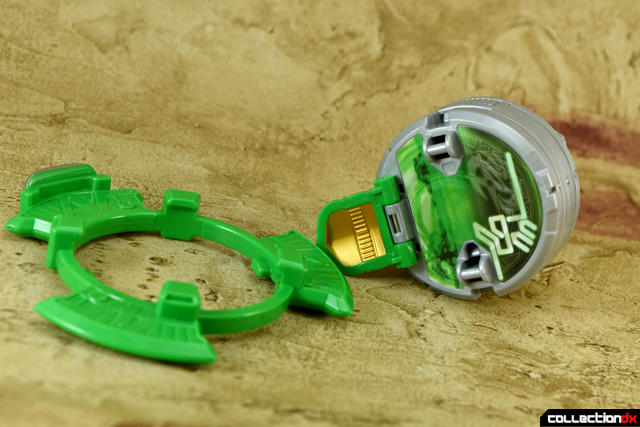 The shuriken for Paonmaru is a nice soft rubber material. I suspect this is so that kids can throw them at each other and Bandai doesn’t get sued because a little kid lost an eye. 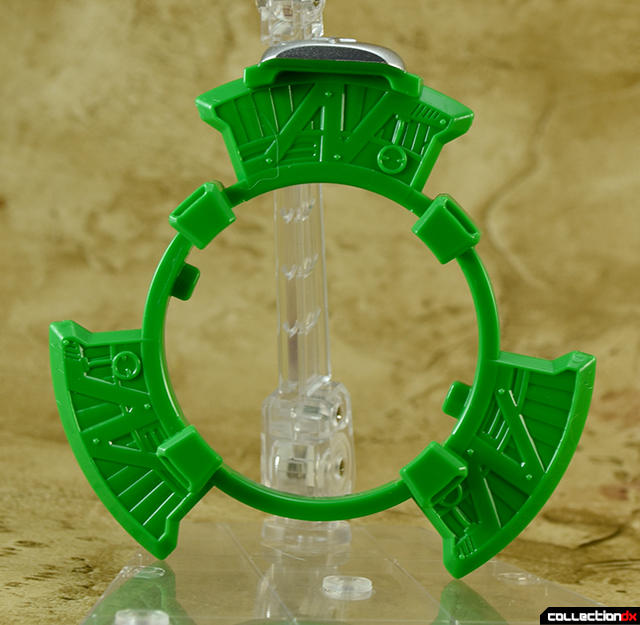 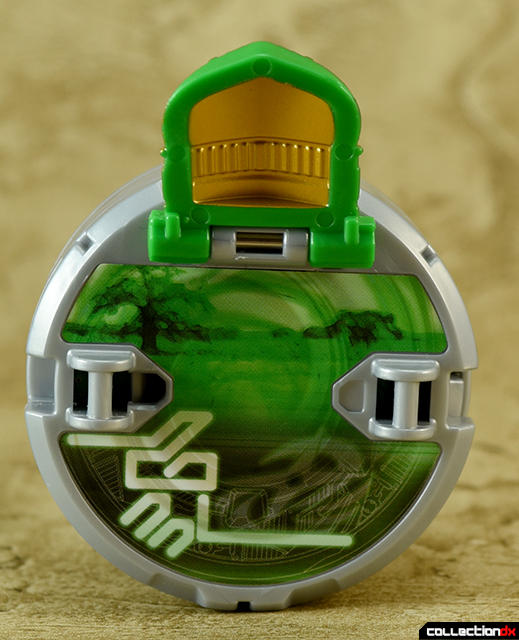 Taking off the shuriken and the holder, you flip some parts out and attach others in a very simple transition to the toy’s robot form.  I am much less impressed with the Gatling-gun-toting humanoid form of Paonmaru, as it doesn’t look that great from any side. From the front, it looks like an elephant head that has sprouted legs and weapons. 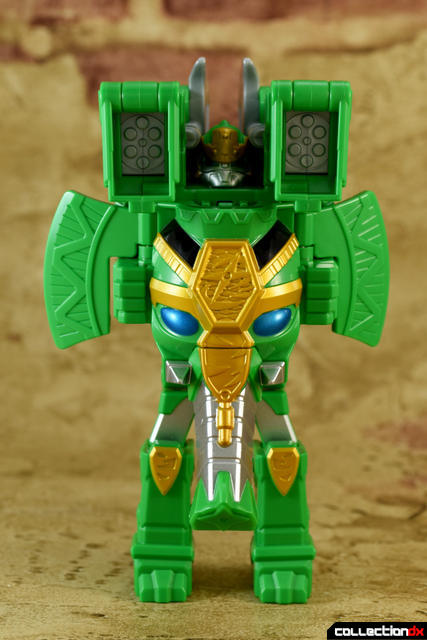 The head of the robot is pretty well hidden by Gatling gun cannons, which is a shame, because Paonmaru has a neat looking, chubby-ninja head. 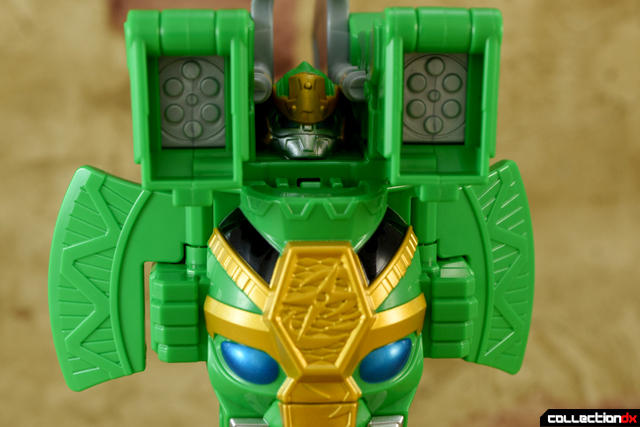 The humanoid form does not look much better from the sides. The skinny body of the robot is overshadowed by the giant elephant head and the legs of the elephant that it carries over its shoulders. 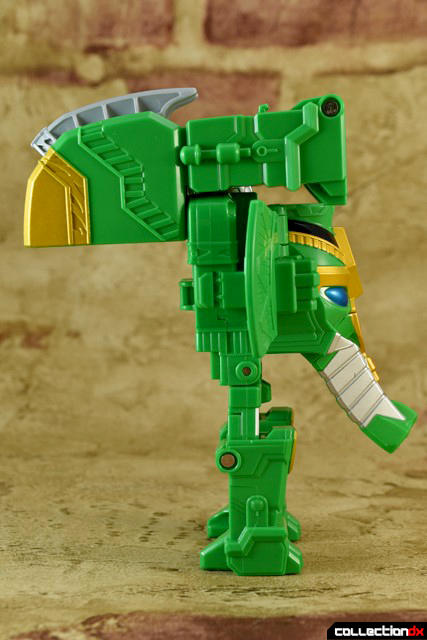 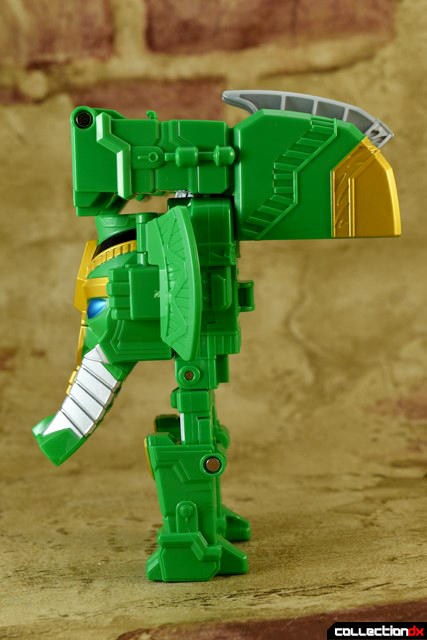 The toy doesn’t look that great from the back. No surprise there. 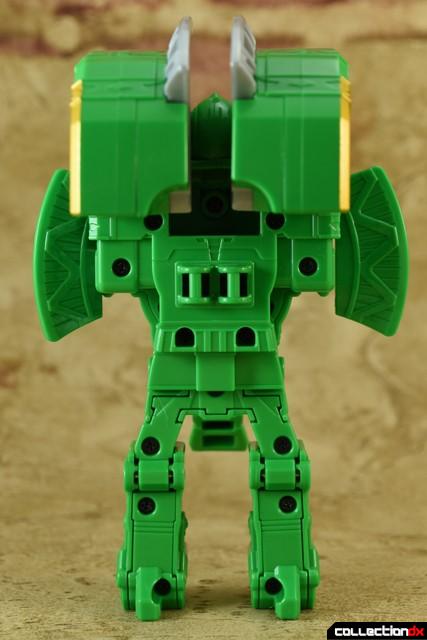 Attack of the headless mecha! 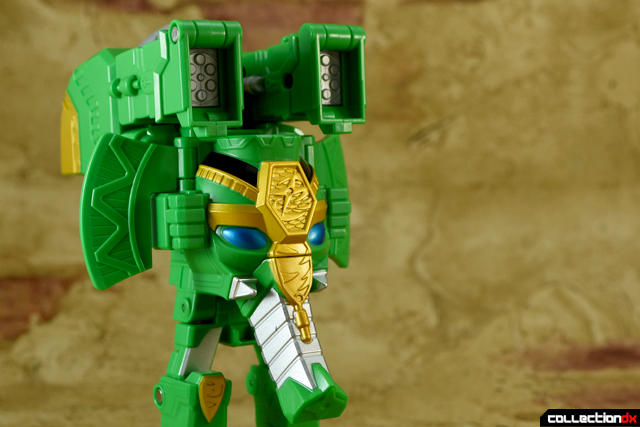 But let’s move on from the not-impressive looking robot form to Paonmaru’s combination with the Shurikenjin. 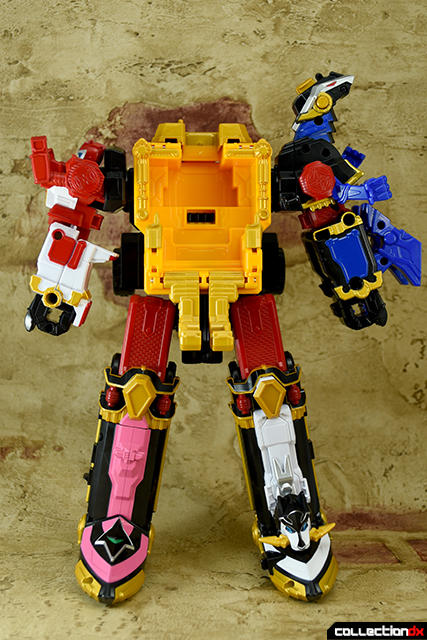 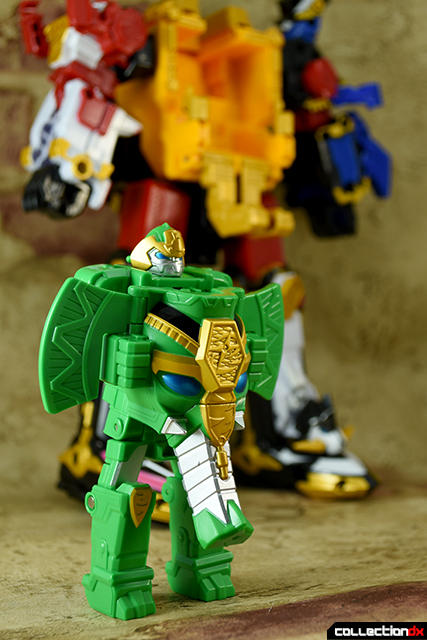 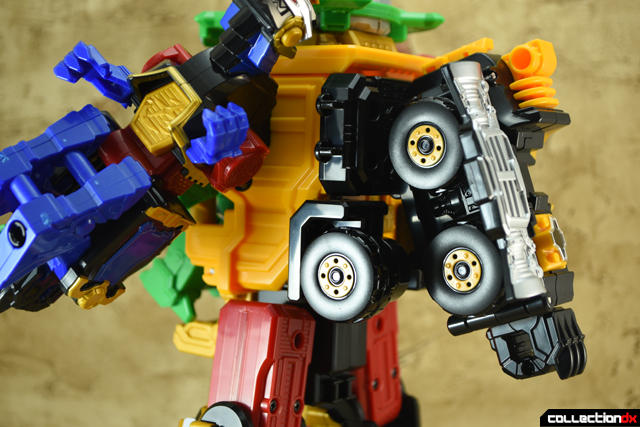 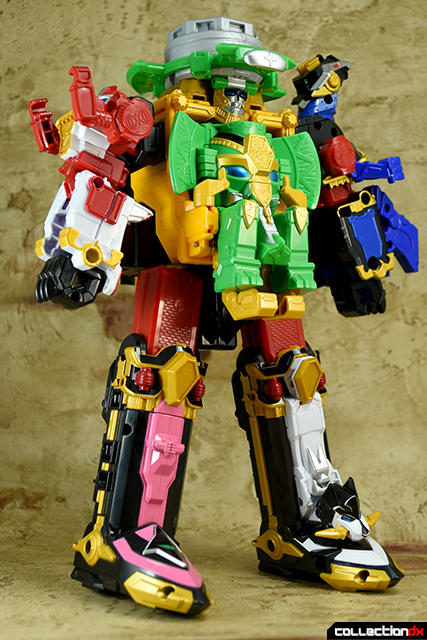 The rear legs of the elephant, which once served as Gatling guns, now become mighty axes for the Shurikenjin. Finally, the shuriken and its holder become the new head for the Shurikenjin Paon. The new faceplate, with its golden beard, kind of reminds me of a Greek God. 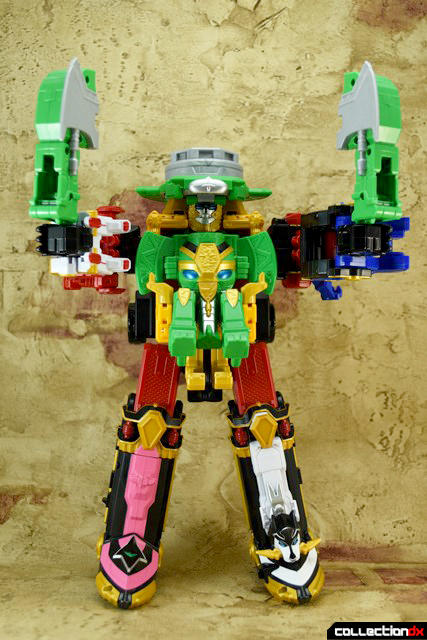 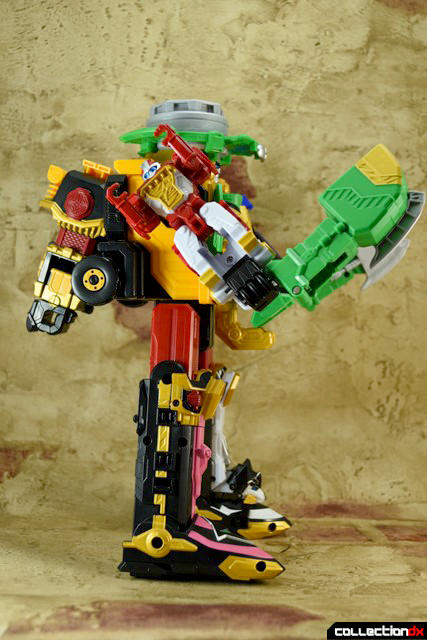 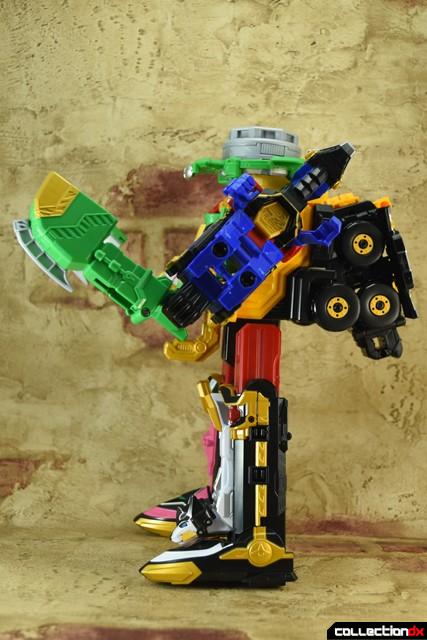 That being said, the Shurikenjin Paon isn’t perfect. The fact that the axes are embedded into the interior of the legs makes the weapons look a bit weird. But overall, this the Shurikenjin Paon is a cool combination of robots. I am a pretty big fan of the pilot-swapping gimmick of the Shurikenjin and I really dig what it looks like when Paon is in the pilot’s seat. The big elephant head does end up taking up most of the cockpit, making it look a bit comical and kind of reminiscent of robots like the Gaiking and the Gurren Lagann. 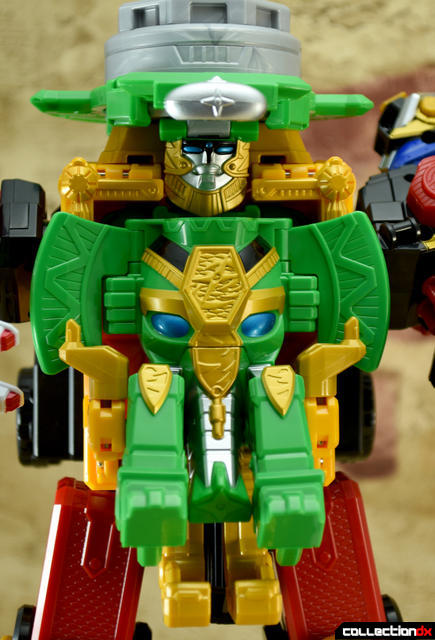 All in all, the Paonmaru is a pretty neat little toy. It has a really cool elephant design and cool combination with the Shurikenjin. 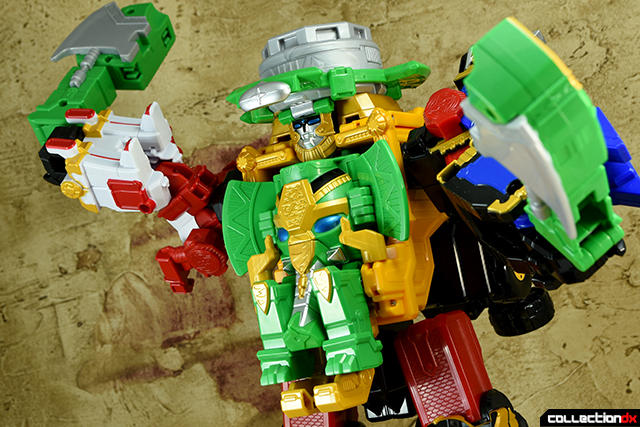 Sure the robot form may be a bit lacking, but I can overlook that because two of the three modes look pretty cool. For the price, it is hard to beat the play value of Paonmaru and what it brings to the Shuriken Sentai Ninninger toy line.

You can actually fit the controls into the robot's hands when in throne mode. I found the most effective thing to do is separate the elephant head from the body, get the body seated, move the control levers into position, then reconnect the elephant head.

I tend to stereotype Bandai of America as skimping in paint apps, but I suspect Bandai Japan may've pulled something similar here. It looks like the design on the back legs was supposed to continue onto the front legs/arms. (I also suspect the intended design might have not painted the haunch area; maybe the fringe detail below instead?)

Thanks for the info. I missed the fact that there are recesses under each hand.

I still think these look ridiculous but it has a certain charm to it that I find really funny. Plus its a dude sitting in a chair on a robot wearing a hat. The nininger stuff kind of reminds me of the older Mugenbine toys with how everything seems to be slapped together.

Since chinese people generally have nicknames that double part of your surname, a lot of my family members call me ningning. Everytime I see the word ninninger, I think the series is just trolling me.