Mobile Fighter G Gundam stars Domon Kasshu, the representative of Neo-Japan in the Gundam Fight, the inter-colony contest to see who gets to lead Earth and its colonies. Domon climbs through the ranks of the Gundam Fight thanks to the martial arts skills he was taught by his master, Master Asia. One of the Mobile Suits that Master Asia, also known as the Undefeated of the East, pilots during the run of the show is the aptly named Master Gundam. This slim and agile machine was built to take advantage of the martial arts mastery of Master Asia.

Following the Robot Spirits release of the Domon’s God Gundam in 2014, Bandai have release his master’s mobile suit in 2015. So will the pupil’s God Gundam prove to be better than his Master Asia’s Master Gundam? Let’s find out.

The Robot Spirits Master Gundam is slimmer than its on-screen counterpart, but it still hits all the necessary visual cues to look like much like it does in the show. 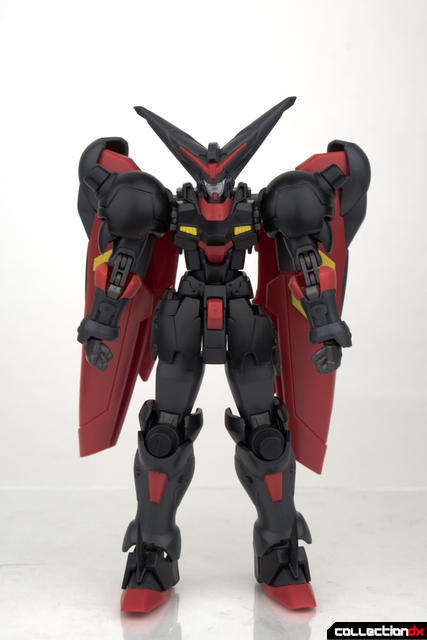 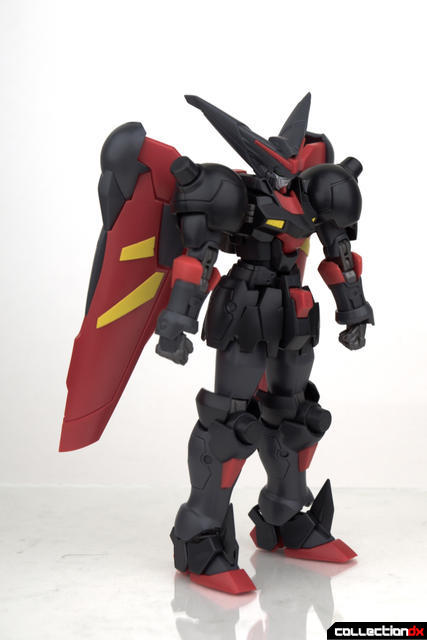 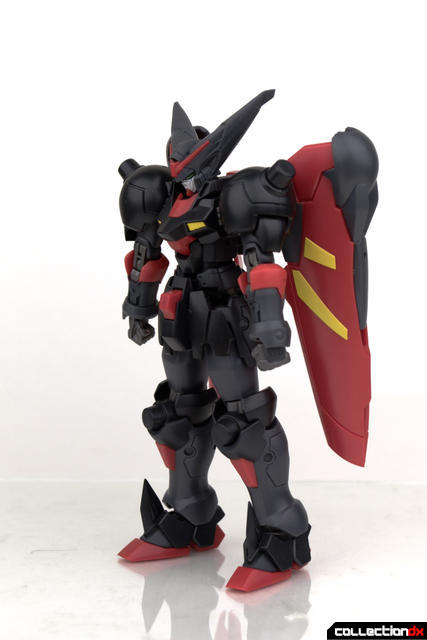 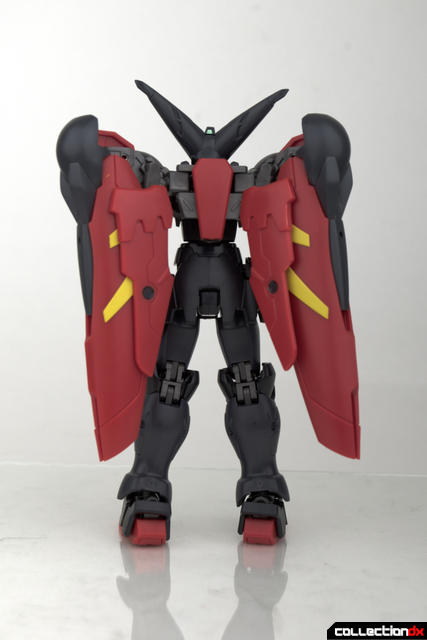 Bandai hit it out of the park in terms of points of articulation. 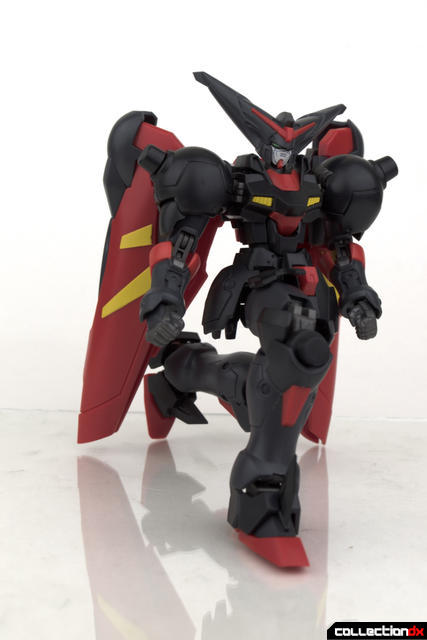 From the toe joints in the feet, to the ball jointed head on the figure, this toy features all of the joints one has come to expect from a Robot Spirits release, such as double jointed elbows and knees, abs crunch, ball jointed shoulders on a hinged panel and much more. 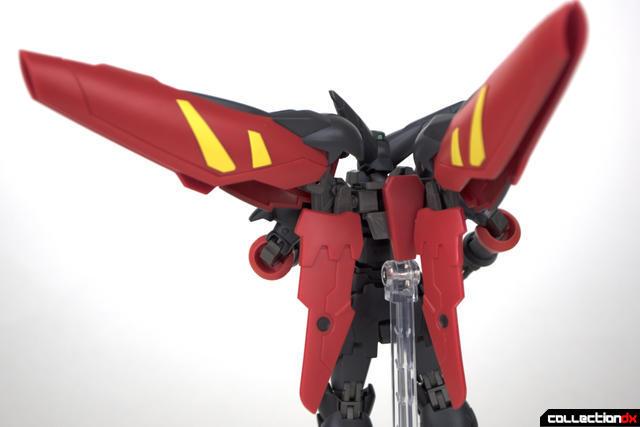 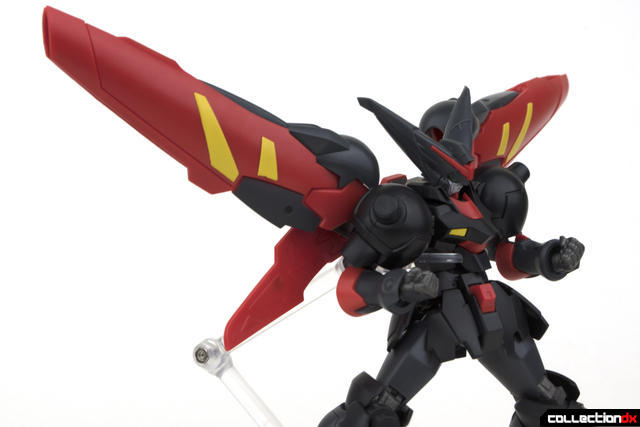 One of the major improvements on this figure over the God Gundam is the use of an arm with a ball joint on each end to connect the side skirts to rest of the figure. This is kind of like the side skirts used in the Saint Cloth Myth EX line. 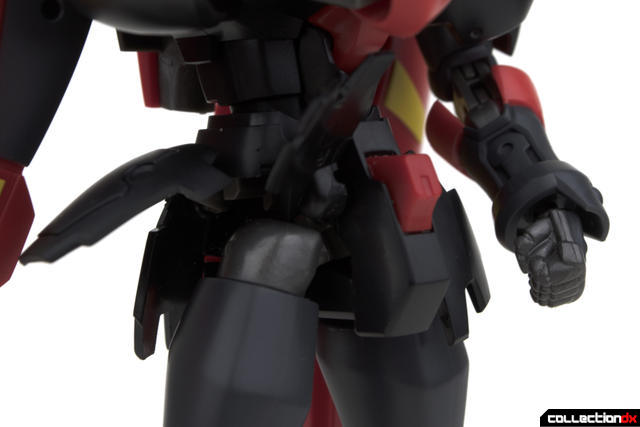 The advantage to these types of skirts is that they can be raised up and rotated a full 360 degrees on the ball joint that connects the skirt with the arm. So you can move the skirt in more ways to allow the legs more freedom to move. 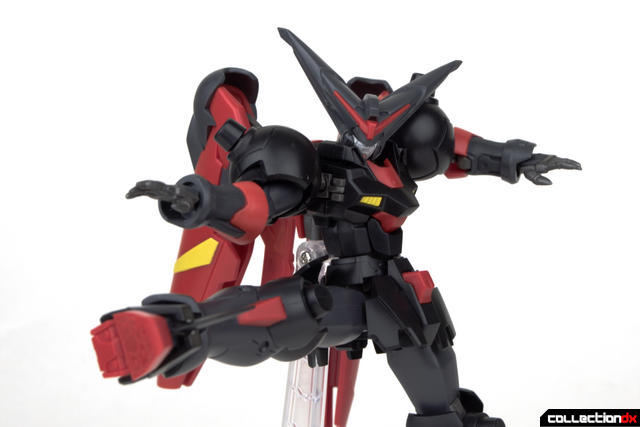 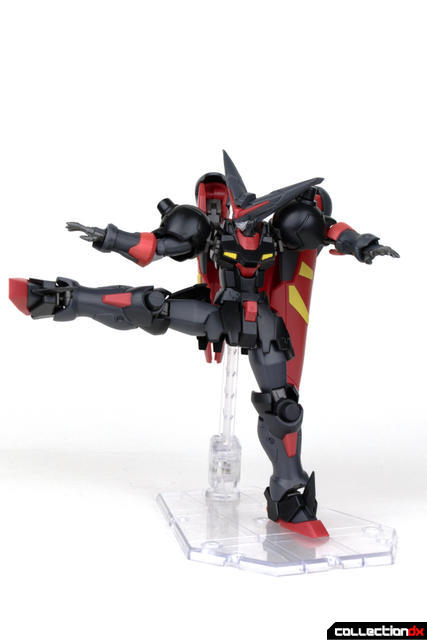 All in all, I was very pleased at the design of the toy. I mean even the kneecaps are on hinges so they can move independently of the lower legs.

After examining the toy for the all the moveable parts, I was pretty excited to finally have the Undefeated of the East’s Gundam in my hands so that I could recreate some great Gundam fights with the Robot Spirits God Gundam. 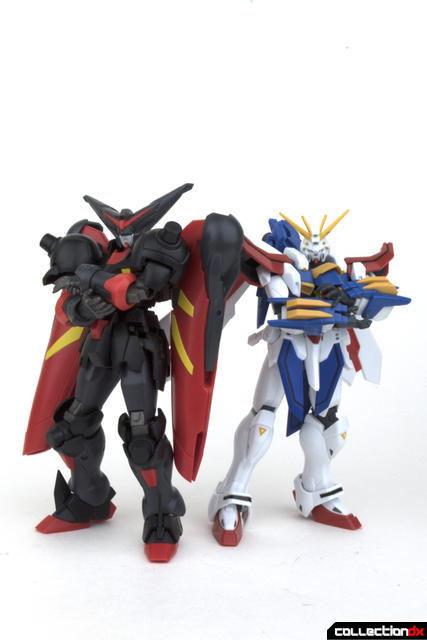 My enthusiasm, however, was short-lived. I soon found out that the thighs on my figure were not strong enough to support the extreme posing I had in mind. As a matter of fact, the toy has a really hard time staying upright when I tried to put the toy into wide stances. So as you will see in many of the pictures for thsi review, I had to use stands to keep this toy on its feet for most of the shots.It really stinks that most of the Master Gundam's martial arts maneuveurs require the toy to be tethered to a stand. 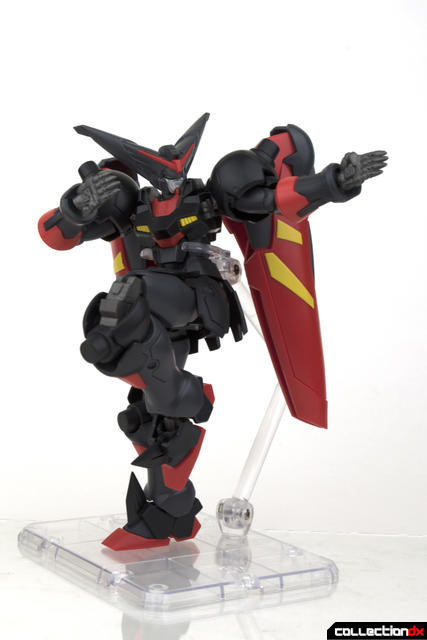 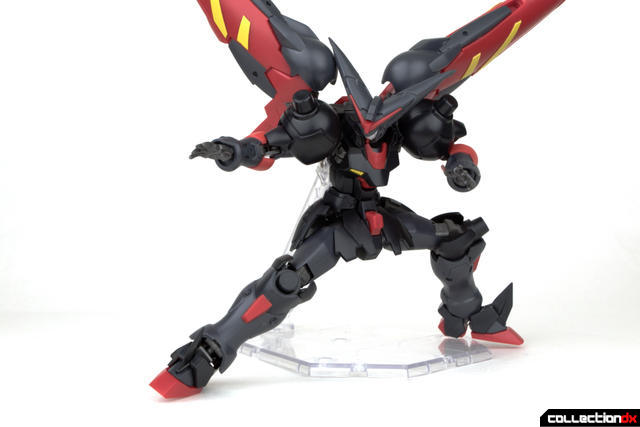 These are poses that the Robot Spirits God Gundam is able to pull off without any assistance from a stand. So its a shame that the master's Gundam can't do the same.

If you want to be a glass-half-full kind of person, at least Bandai was nice enough to place a hole on back of the figure, so that you can plug a stand arm into the backpack.

Also, I didn't always have to use a stand. The Master Gundam is able to stand on its own as long as you keeps the legs together fairly close 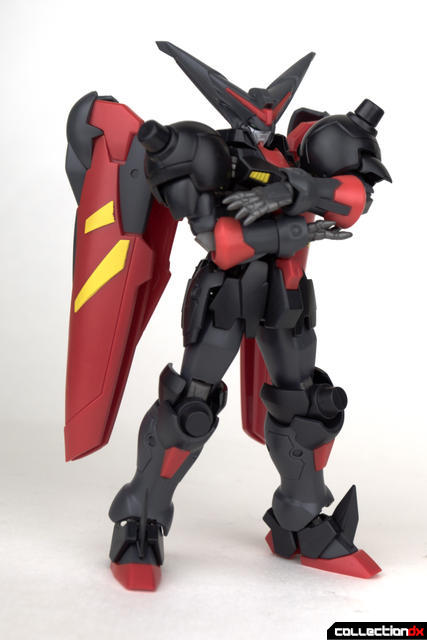 Besides the 6 pairs of hands that come with the Master Gundam, this release is pretty barebones. 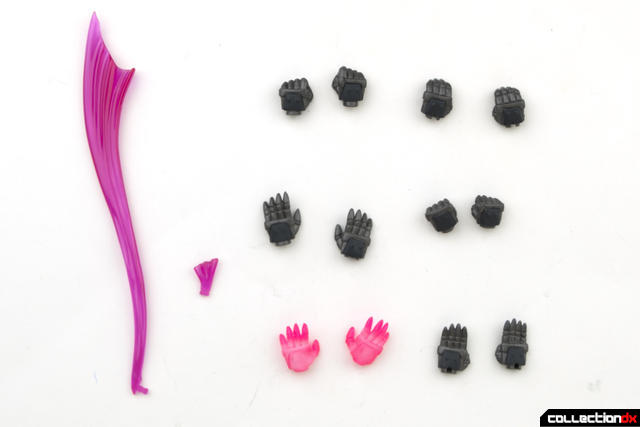 The glowing hands are for when the Master Gundam uses its Darkness Finger. 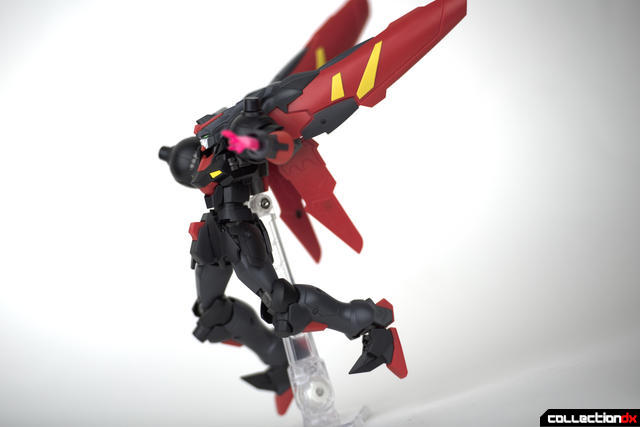 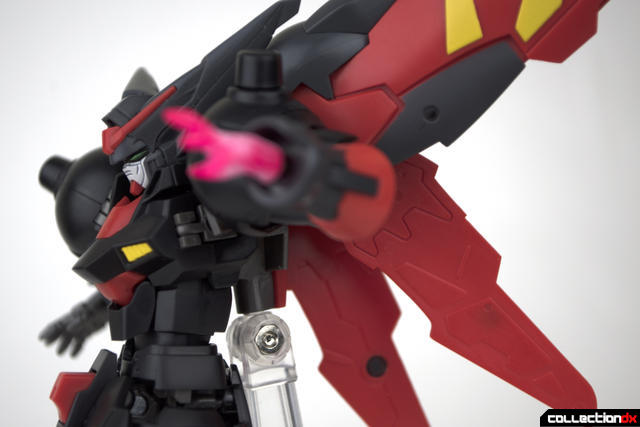 The details on the hands are pretty nice, even the beam emitters are present on the palms of the hands. 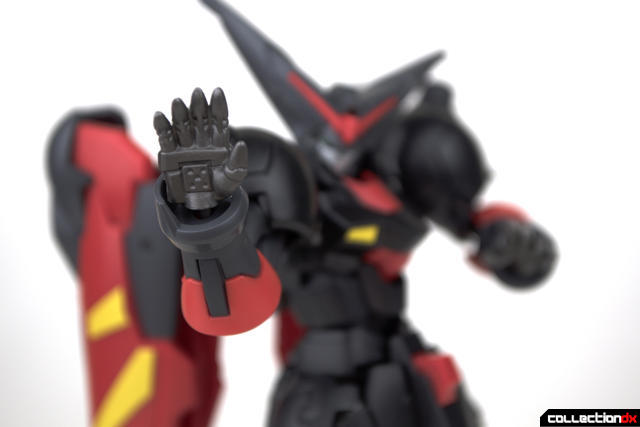 In the show, the beam emitters can be used to produce beam cloth, known as the Master Cloth. That is the one other extra included with this toy. You get two plastic pieces that plug into one of the "holding stuff" hands that come with the figure. 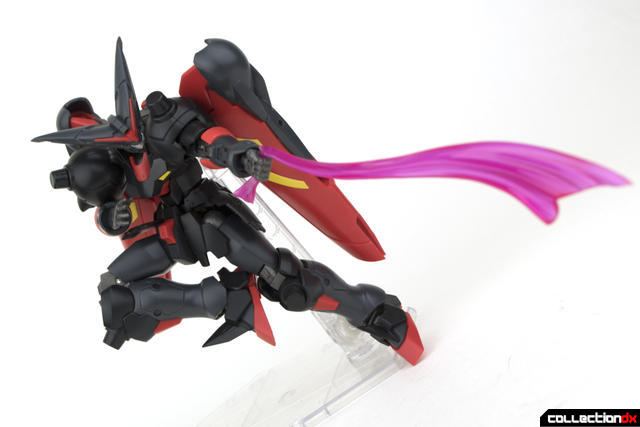 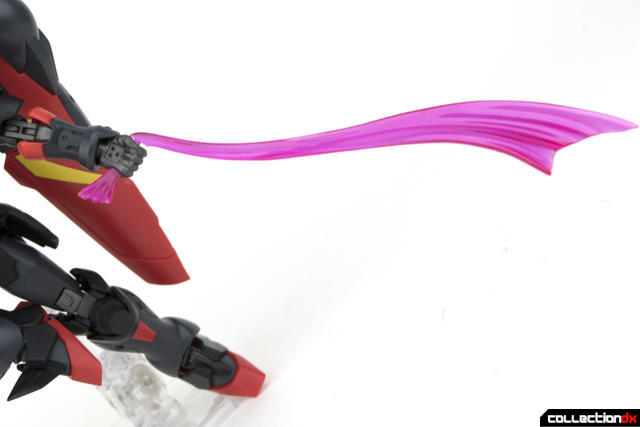 In theory, this should have been a pretty awesome toy.  So much thought was put into how the figure would move so that it could accomplish the crazy martial arts action of the toy’s on-screen counterpart. However, the issue with the thigh joints brought my enjoyment of this toy down a few notches. The Robot Spirits God Gundam was such a joy to play with, that it’s a shame that the God Gundam couldn’t follow suit. 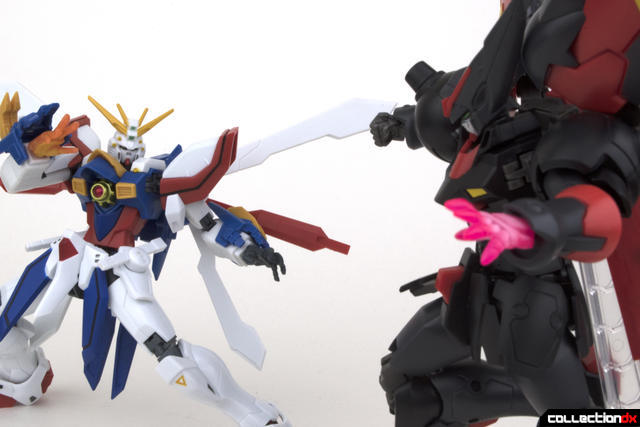 For me this will no doubt get lost in the shuffle of sub-par releases that Bandai has put out over the years.

I'm kind of bummed after reading this review. I had been eyeing this guy for awhile. For some reason I always loved the wild and wacky G Gundam mecha. I used to have the full MSIA set. And the Master Grade Master Gundam model remains one of Bandai's finest ever offerings. (Sadly mine was lost in a move years ago :_( )

This guy seems disappointing not just for the lack of stability when posing (something the 10+ year old built it yourself did beautifully at the same price point) but the lack of accessories. Where is the cloak transformation for the wing that wraps around the robot? The absence of that is huge. (Lemme guess Japanese Web Exclusive Accesory Kit? ) I know the point of Robot Damashii is really well done perfectly detailed and articulated figures. It just seems like Bandai has delivered much better, at a better price point, for this robot, in the past.

Yes, the cloak is part of an optional Web Exclusive set, which is pretty lame. Besides the cloak, you get some punching effects parts and crossed arms. Not really worth the 70-80 bucks it will cost to get.