If you’re reading this then you know who Master Asia—Tohofuhai (Undefeated of the East)—is already, and you know that he’s basically one of the coolest characters to ever.

With that, Bandai gives us the SHFiguarts Master Asia from the (best) Gundam show Mobile Fighter G Gundam. After years of wondering if his gray prototypes were anything more than vaporware (or the action figure equivalent), we are met with the King of Hearts in person. . . and he was worth the wait!

Let’s take a look at the Undefeated of the East: 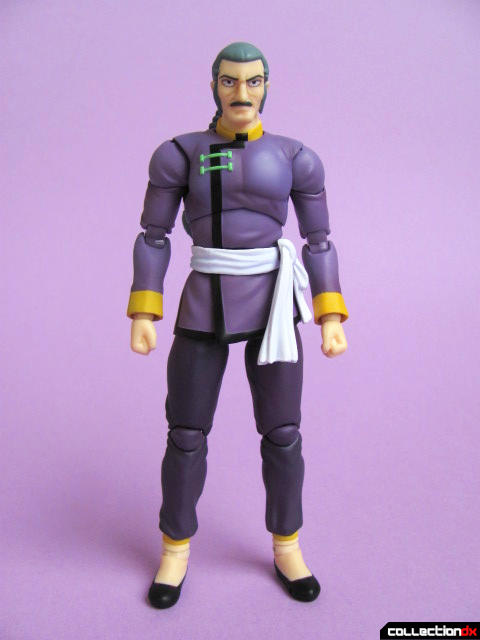 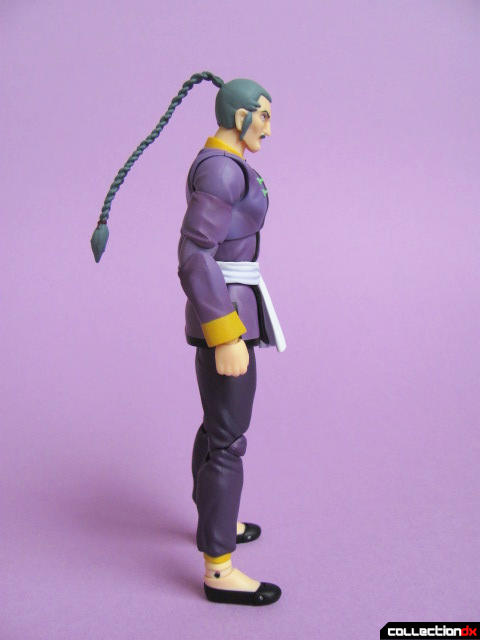 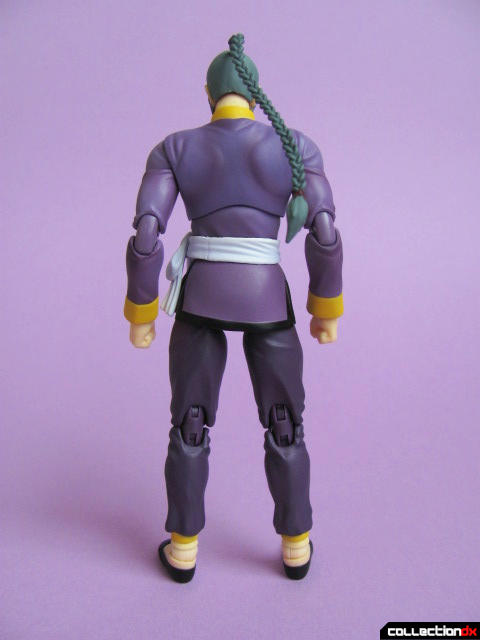 He’s rather on the stout side with sculpted muscles and enough girth to ensure great heft and a silhouette worthy of a Gundam Fighter. He feels a tad bit slimmer than his onscreen counterpart, but I chock that up to 3D representations and no on-screen artistic directorial liberties. Other than that, his sculpt is solid with fabric emulation, excellent joint hiding, and great portrayal. 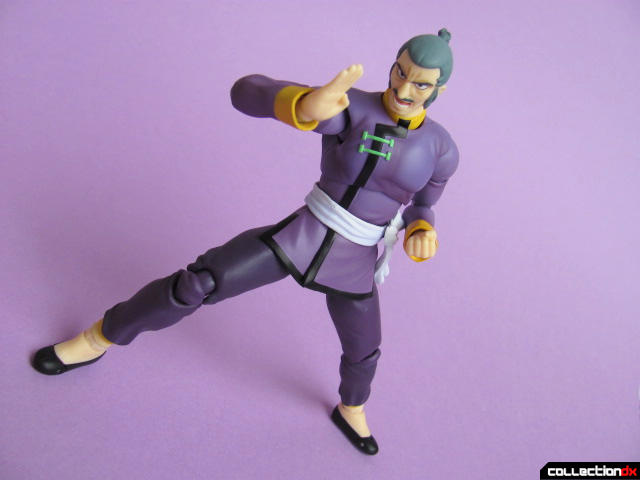 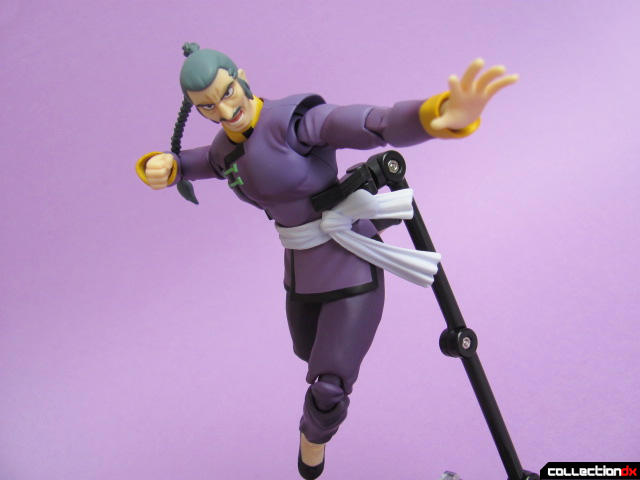 However, not everything is oh so keen. I did say that this figure has excellent joint hiding and implementation, but that’s not so true for his ankles. The joints don’t look bad; it’s just that they look like joints. While never an issue before and on other figures, it just looks a little odd being flesh tone: 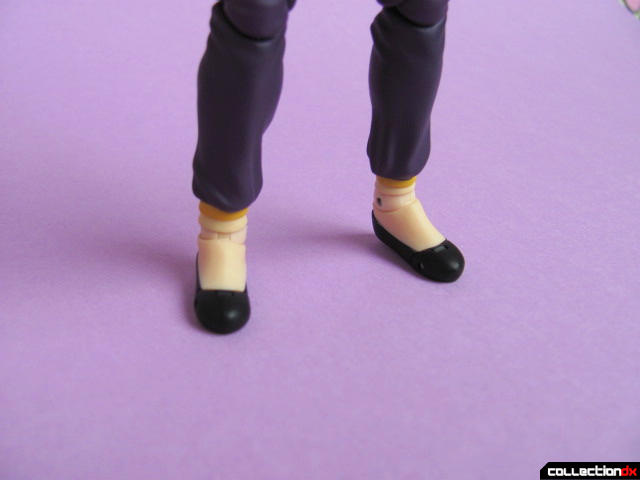 Tohofuhai’s face is also a point of (minor) contention. While I can’t place my finger on why, his features just feel a little soft. I know exactly who I’m looking at, mind you, but the emulation isn’t 100%. That being said, the painted-on cel shading is extra nice: 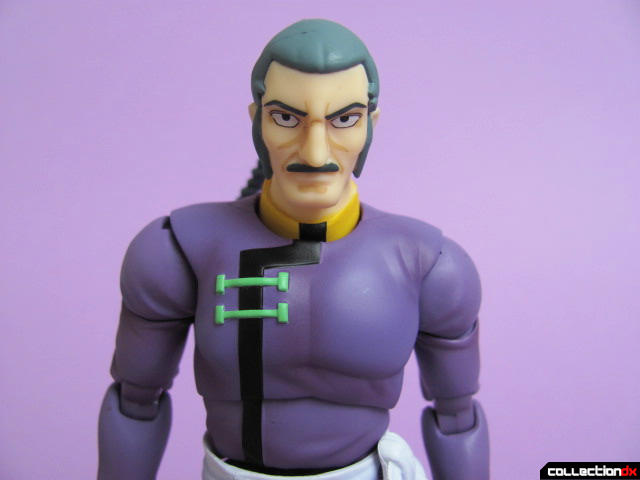 It could very well be the fact that his mouth is missing a draw line (like most figmas posses) and this could be leading to his “softness.” That and his eyes are too big. But I digress. . .

Moving on, his colors are deep and matte and just so dang purple. While not quite as vibrant as his on-screen counterpart, they introduce a more realistic and eye pleasing palette, one not so “anime.” 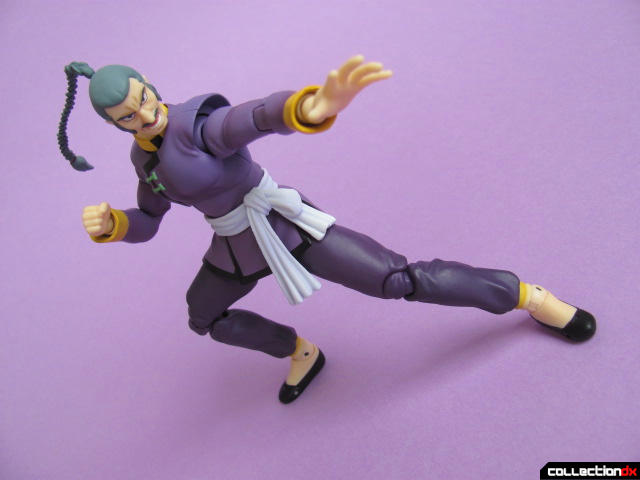 The paint is well applied and especially to the torso area. Bandai has given Master Asia an almost air-brushed shading effect on this entire torso that looks AWESOME. While I’m usually against such paint apps (since it doesn’t always look good in every light since it assumes its own light source), these are subtle enough to play well with any light and—although still subtle—give so much life to the figure. 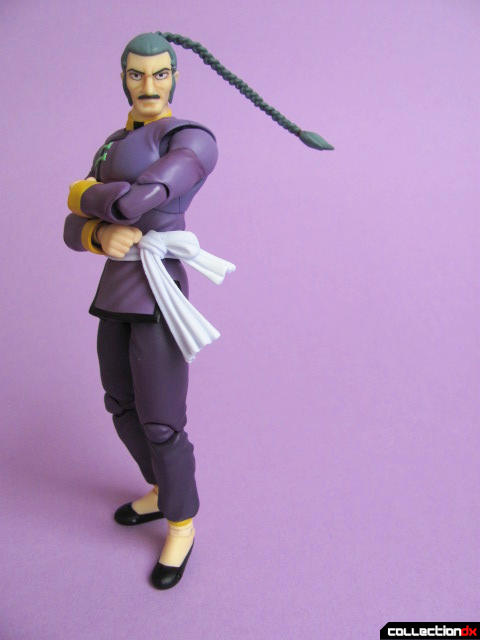 Alls not well in the paint department, though. The yellow is weak on its borders with purple and would have benefitted from another coat. There are also minor flecks and overspray as well but you’d have to get up close and unsettlingly personal with the figure to notice, so no biggie. 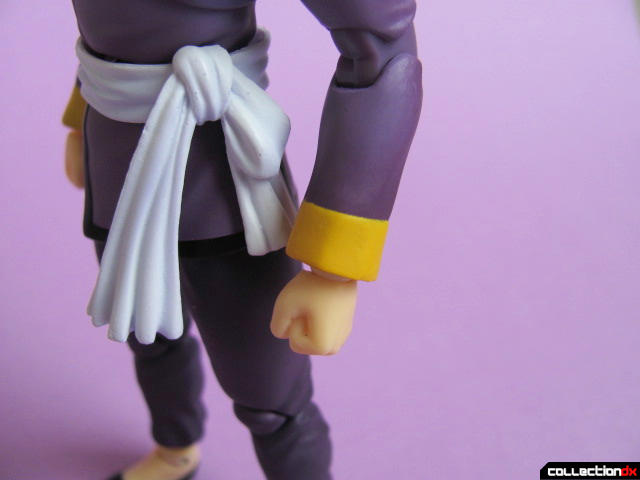 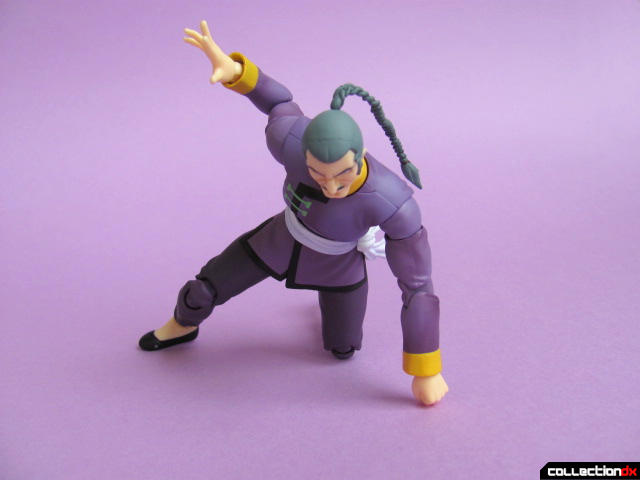 Even his pony-tail and sash are articulated! 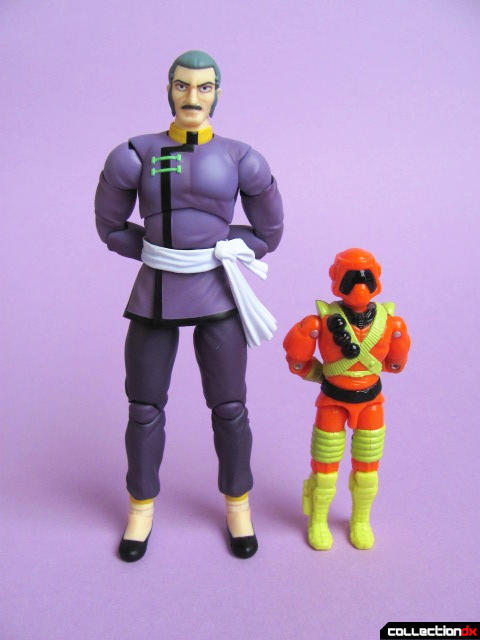 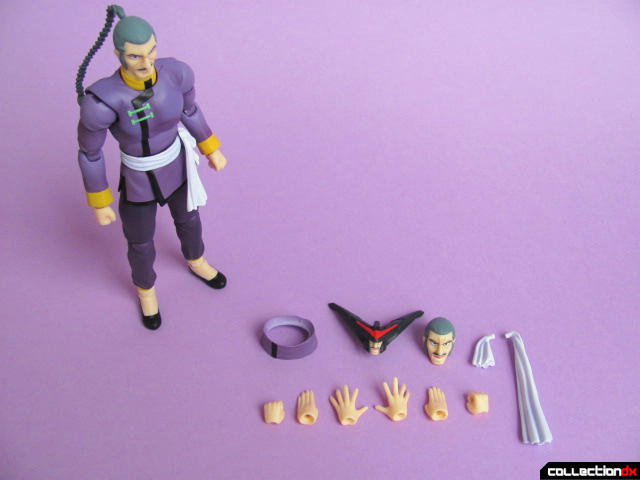 The heads exchange easily with only requiring the pony tail to be interchanged between them. The hands follow suit and can be exchanged easily. Separating his body at the waist, one can remove his sash and then have him equip it with the extra part. The cover-up waist piece fills in the gap left from the sash: 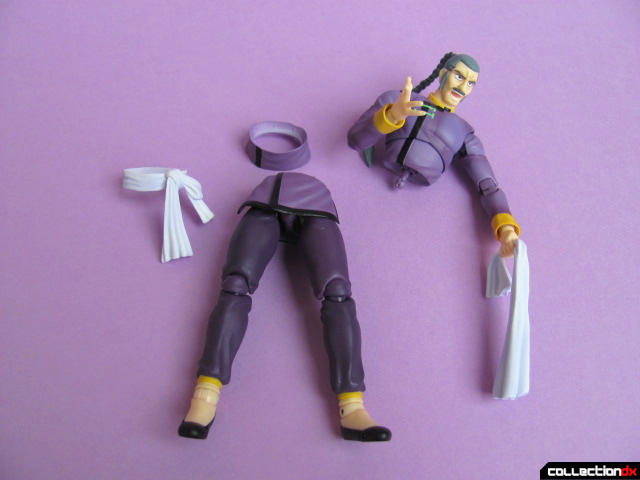 Putting him back together after this is a trifling experience, however, as the fit is SO tight. You’ve got to apply a lot of force to make him snap back together with the cover-up piece. The final effect is nice: 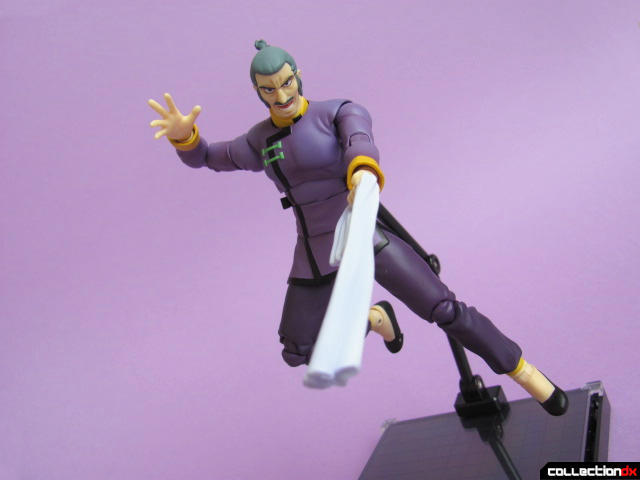 One of the coolest accessories is the Master Gundam head with Master Asia’s face in it, something that happened often in G Gundam (and is wicked cool). If you were to purchase the Robot Damashii Master Gundam this would fit on its neck. 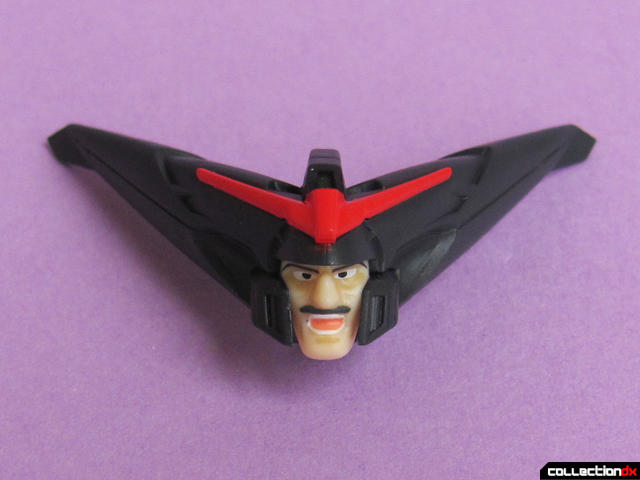 Finally, after all this time, we get our hands on a SHFiguarts Master Asia. And boy, does it satisfy. A great figure from a great show, Tohofuhai hits almost every mark with flying colors. Now all we have to do is see if those Rain and Allenby SHFs presented at the same time ever get released. . . . . 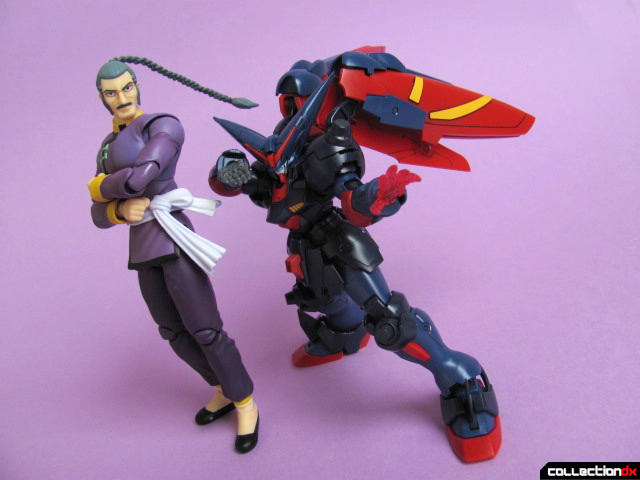 4 comments posted
The paint on his face does

The paint on his face does look a lot softer compared to the prototypes.

That's a great looking figure, I'm glad you don't see many problems in it.

That Gundam head cracks me up every time! Is it compatible with.. what you have there? (MSIA? HG?)
I remember back a few years ago having to buy a 'hobby magazine exclusive' set for the Domon head to go with the Master Grade God Gundam.

Yeah, it's a really solid figure; better be after all this time, ha!

The Gundam head is just too good; Imagawa does something similar in most of his robot shows but this took it to a whole new level. Bless Imagawa. And what I have is the HG and sadly, no, it isn't compatible (not that it would look right anyway; the colors of the HG are screen accurate while the RD is just black).

And yeah, I remember hearing about those hobby heads for the MGs.

If G Gundam had been more popular, I think Master Asia would have gotten the "Chuck Norris" treatment, except a portion of the jokes wouldn't even be jokes; they'd just be TRUTH. Like how Master Asia doesn't need the bodysuit to control his Gundam - he just DOES. And who else uses a freakin' cloth to fight? And wins with said cloth?

Basic thing here, is that I'ma need this figure.