Kinnikuman (キン肉マン) is a long running series that began as a manga by creative duo, Yoshinori Nakai and Takashi Shimada, and follows the titular character as he fights, wrestles, and eats gyudon all in the name of justice. He was born the prince of Planet Kinniku, but was left on Earth as a baby due to an incident involving a family trip and a pig. Kinnikuman himself embodies the series' lasting appeal with his dazzling wrestling moves and goofball antics. He competes in the Choujin Olympics to be the top superhuman being in the galaxy.

Recently, Bandai joined the fray of Kinnikuman based action figures after both Kaiyodo and Medicos fought it out with their Revoltech and Super Action Statue toys respectively. Stepping into the ring is S.H. Figuarts Kinnikuman, the first wrestler of the line. 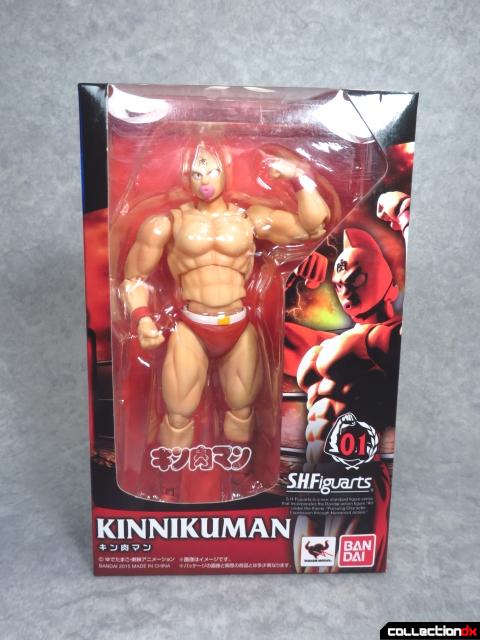 This action figure of the famous muscleman knows how to make an entrance as he comes pre-posed flexing his biceps in the package. 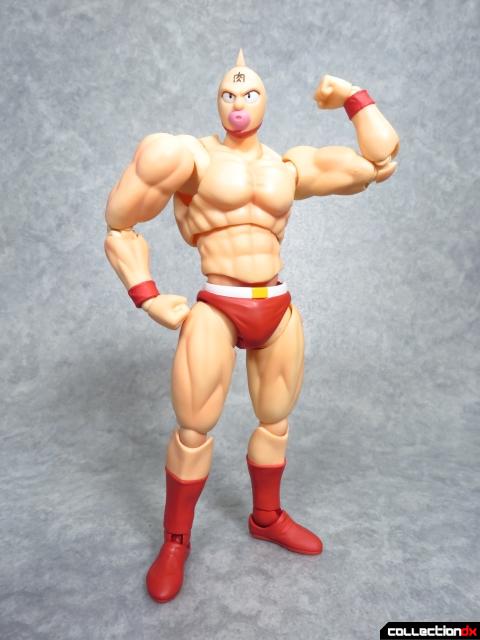 Once removed from his box, Kinnikuman stands a solid six inches tall. If you look closely at the toy, you'll see that the intergalactic wrestler features subtle shading over his musclebound plastic body. 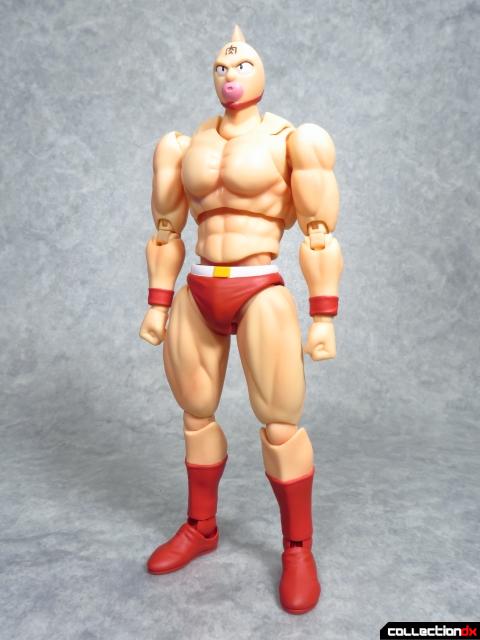 This toy represents Kinnikuman as you see him most of the time. He struts around Japan wearing red wrestling trunks with matching boots and is always ready to save people from danger (right after finishing his bowl of gyudon). 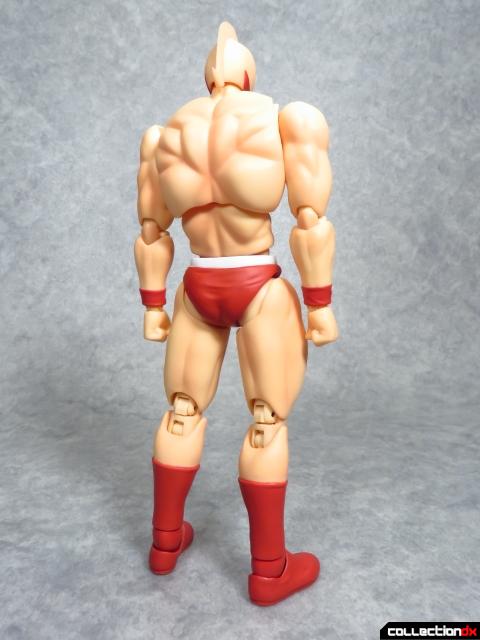 The figure's sculpt does a good job of representing a mostly naked alien muscleman that still has a ton of fully functional articulation. Even Kinnikuman's butt is lovingly rendered. 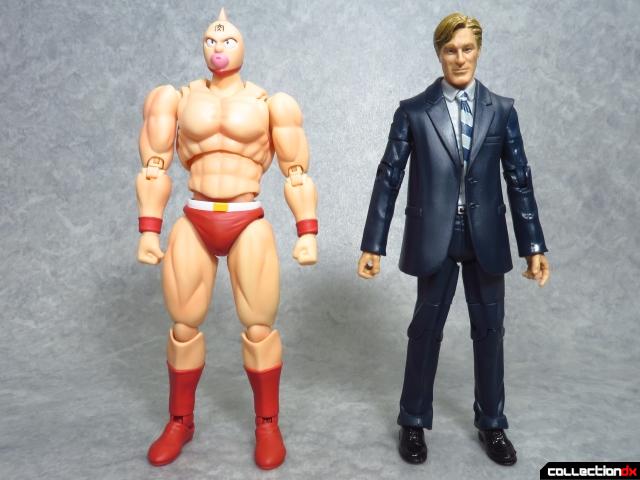 Kinnikuman can look a little small when standing next to other ~1/12 scale figures, but this is actually pretty accurate to his stated height of 185 centimeters (about 6 ft. 1 inches). 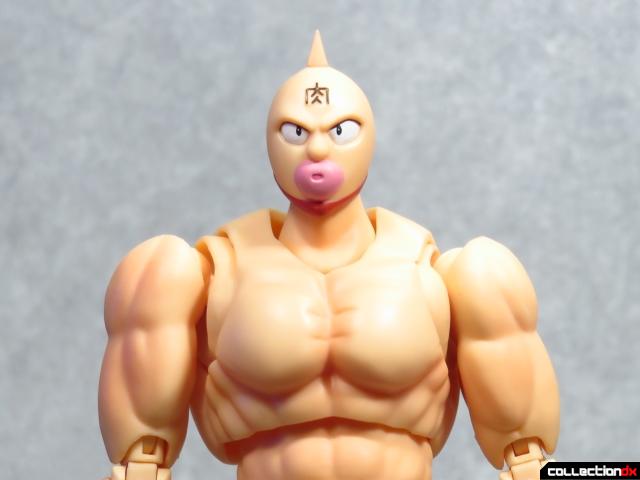 Bandai provided three different heads to allow the wrestling prince to express himself. By default, Kinnikuman has his massive lips pursed like he's about to start fighting or flex his muscles to impress the ladies. Also note that all of the heads have his trademark "肉", which is the kanji for "meat." All three have the character's Ultraman style head fin that end with a sharp tip on the back. 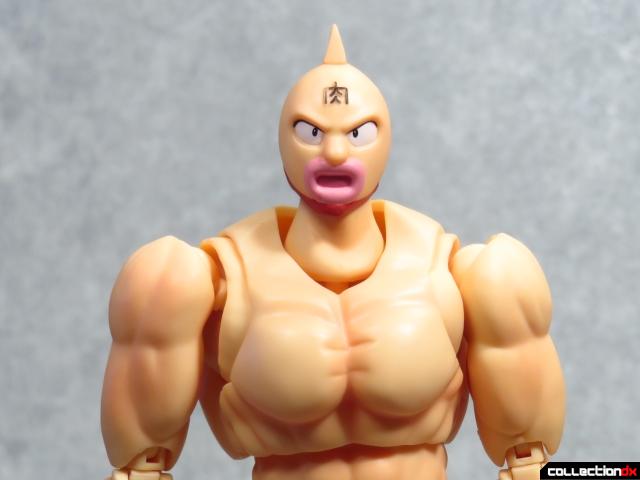 Simply pop one head off at the neck ball-joint to swap parts around. The second noggin has Kinnikuman's mouth open as he were talking or getting mildly angry. 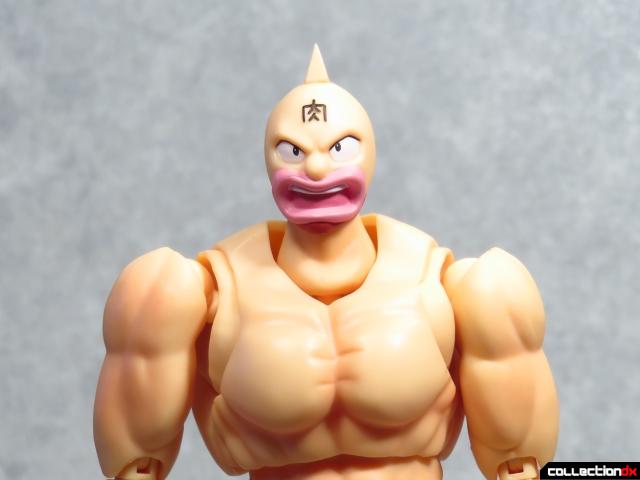 The third head shows Kinnikuman being way more intense with a bit of teeth showing to demonstrate the seriousness of the situation. 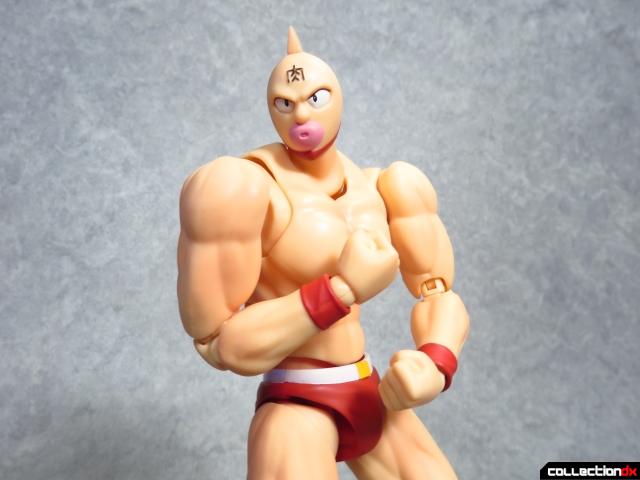 Since the character is a wrestling hero, Bandai went all out to make sure this S.H. Figuarts can move and pose much like a real king of the ring. Everything that should move, does move and lets Kinnikuman show off his physique with authentic flair. 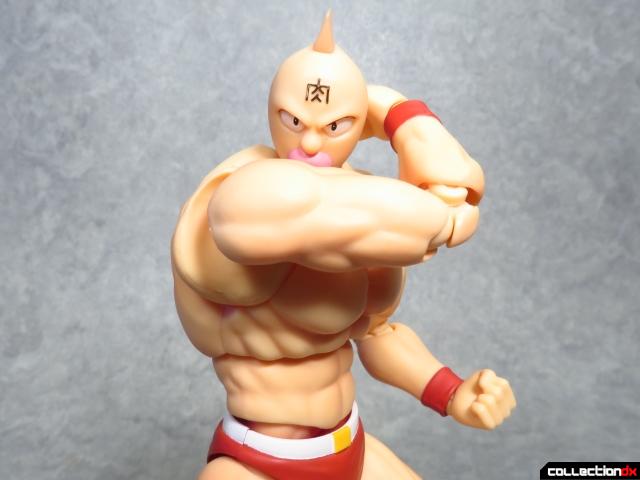 His shoulders feature an extra movable chunk so that Kinnikuman can curl his arms up and around enough to even encircle his own head. This comes in especially handy when doing all kinds of holds and grapples with the toy. 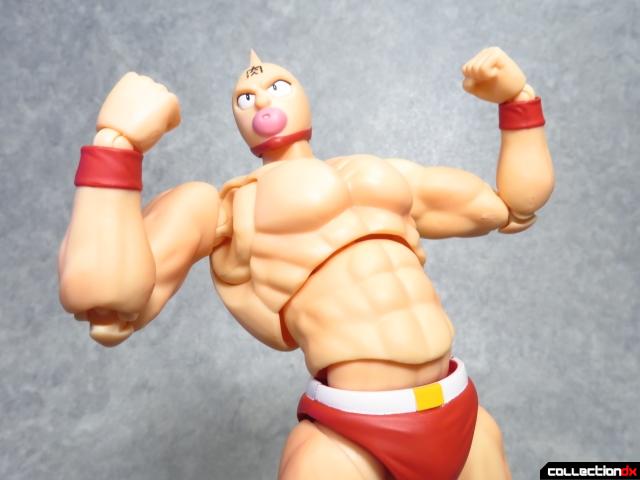 Kinnikuman's torso features a ball-joint in the waist and upper chest area for proper flexing. The figure's midsection is separate from its inner joints so it can "float" around and cover up the gaps. His neck features a similar double ball-joint setup so he can move his head around in a natural manner. 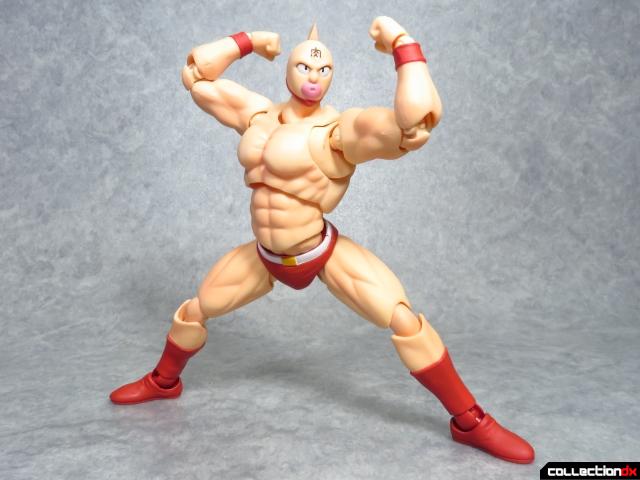 Keeping the hero upright are legs equipped with pull-down hips, deep bending knees, and fully functional ankle tilts. Oddly enough, Kinnikuman's feet cannot turn left or right on their own, but the effect is still achieved through swivel points in both his knees and hips. 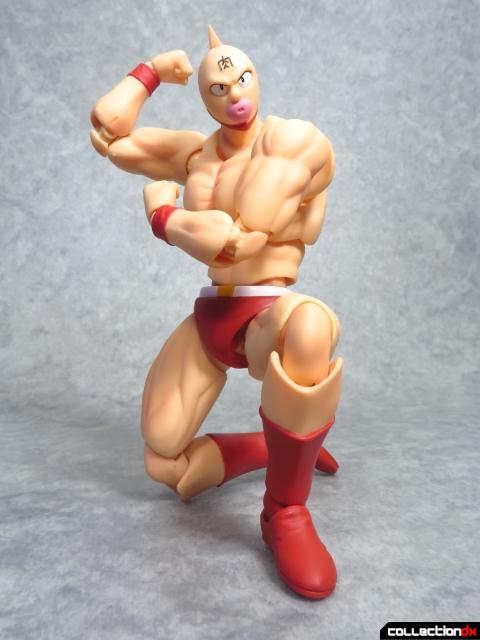 Everything moves so smoothly on this figure that it makes him a joy to pose. As he lacks any accessories besides extra hands and head, Bandai focused all their design efforts into making the most flexible Kinnikuman they could at this scale. 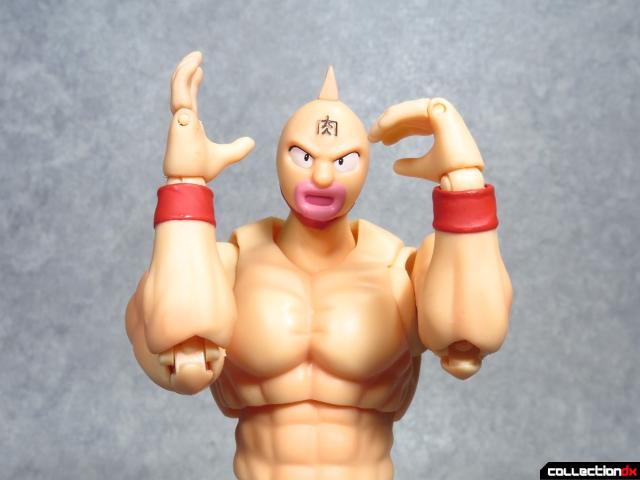 Kinnikuman's only other accessories are a pair of open hands that feature hinged fingers. This feature allows him to both emote and grapple other figures. It's a very simple gimmick that works extremely well. Best of all, it lets Kinnikuman do his favorite dance... 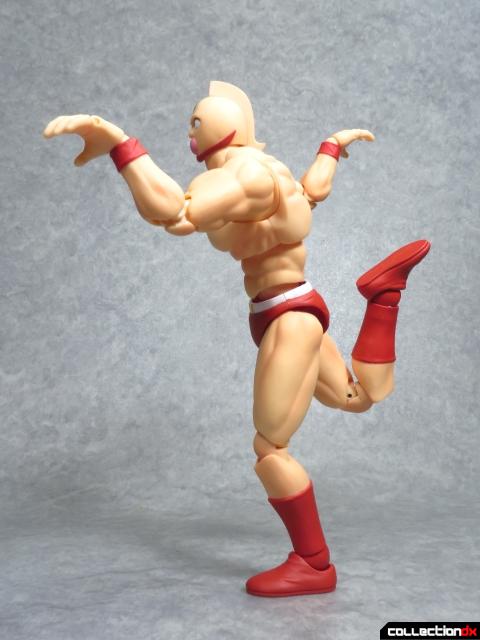 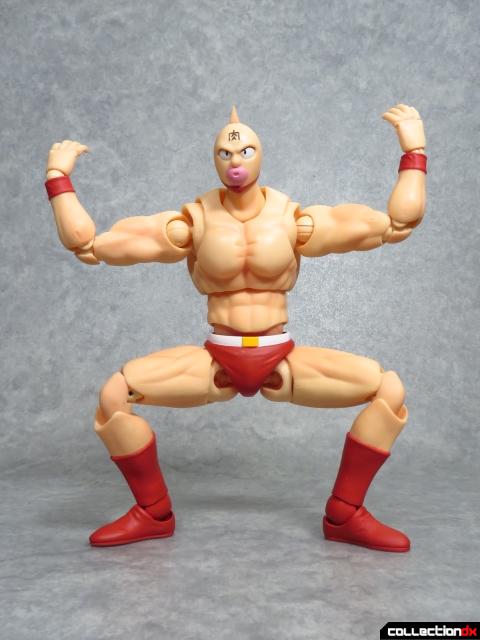 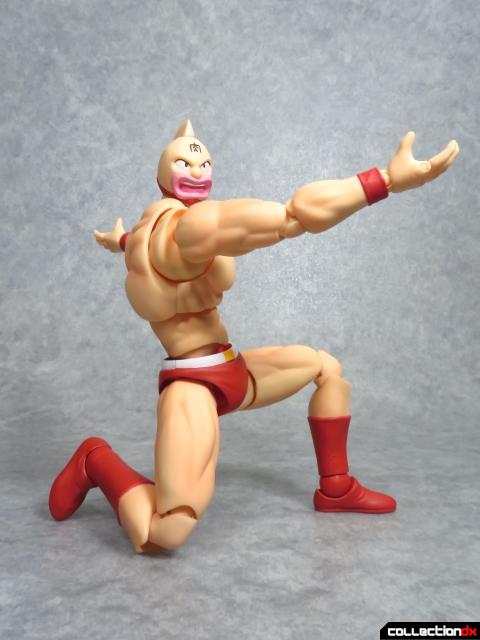 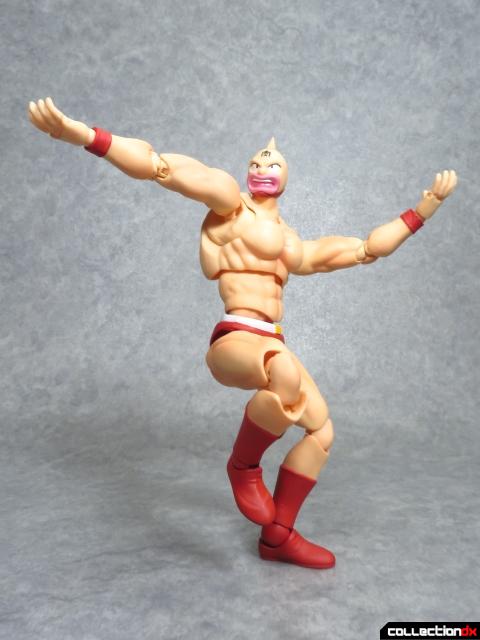 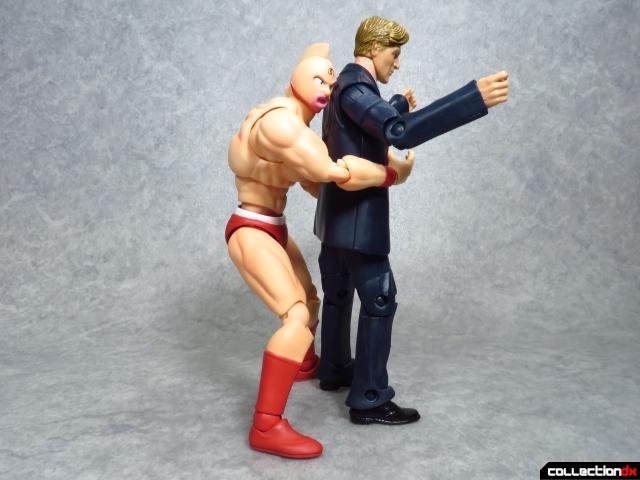 The range of motion in Kinnikuman's arms allow the Figuarts to wrap its grip around other toys quite well. For the purpose of this review, my six-inch scale Eckhart will serve as the first sparring partner. 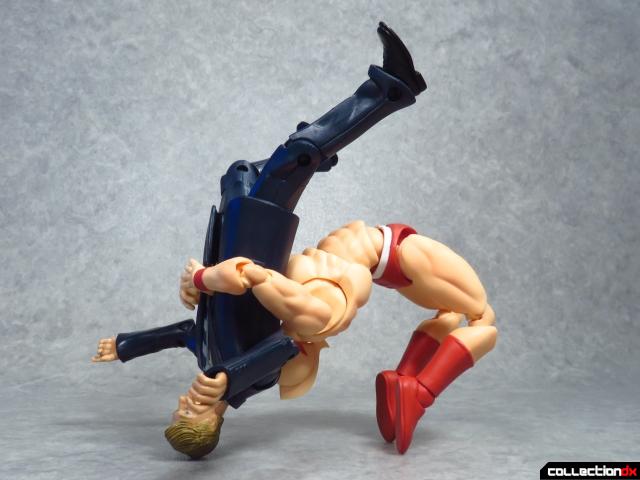 This toy is truly made to wrestle as it can pull off all the classic moves like a quick, devastating suplex. 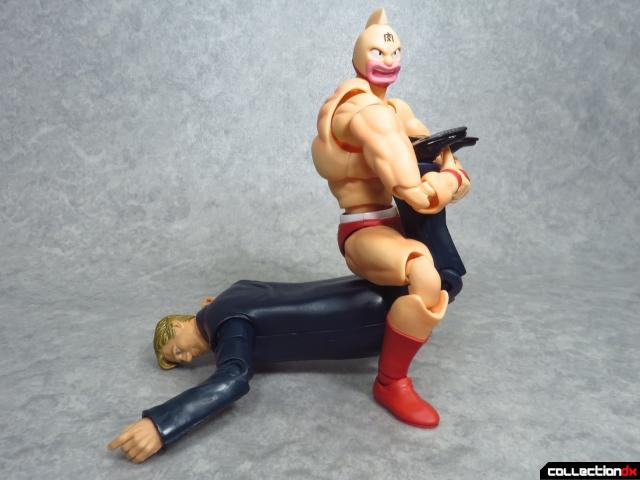 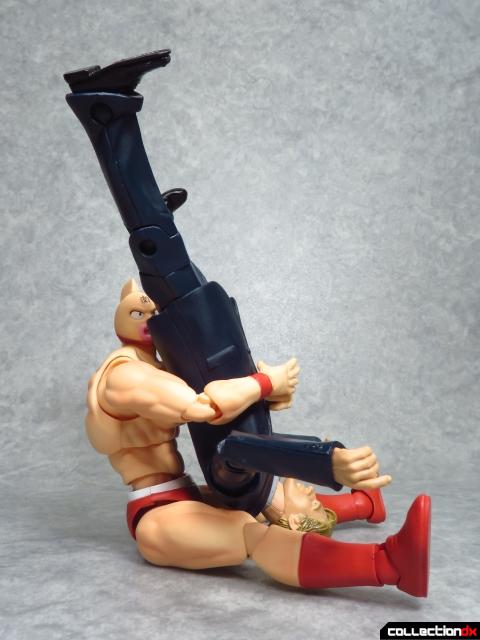 And the ever popular Pile Driver. 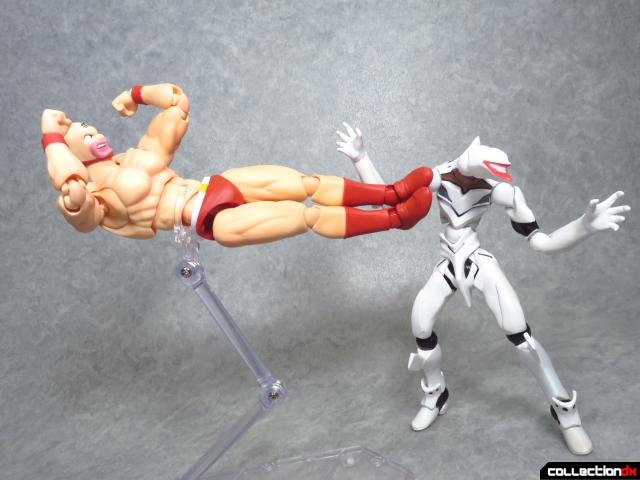 While Kinnikuman lacks a hole for a stand to attach, he works pretty well with the standard figure clamps included with Tamashii Stages. This lets him lay a wicked dropkick on an opponent. 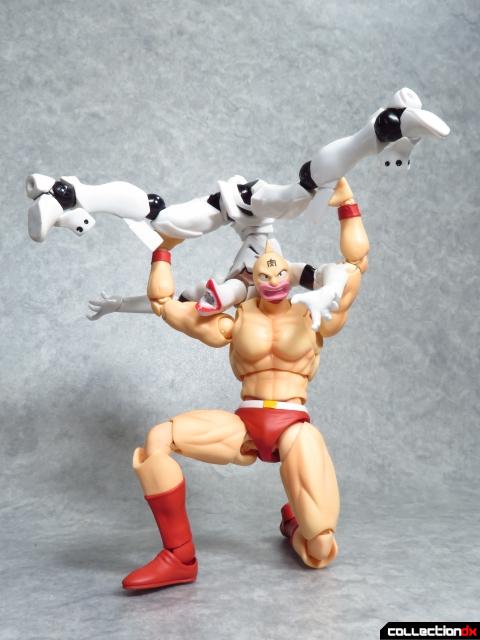 One of Kinnikuman's most well known finisher is the devastating Kinniku Buster, which the Figuarts has no trouble performing. The figure is strong enough to hold an opponent up without extra support too! In fact, it's actually pretty easy to set up Kinnikuman in almost any wrestling move due to his well designed articulation. And when you wanna put 'em down for good, just unleash the... 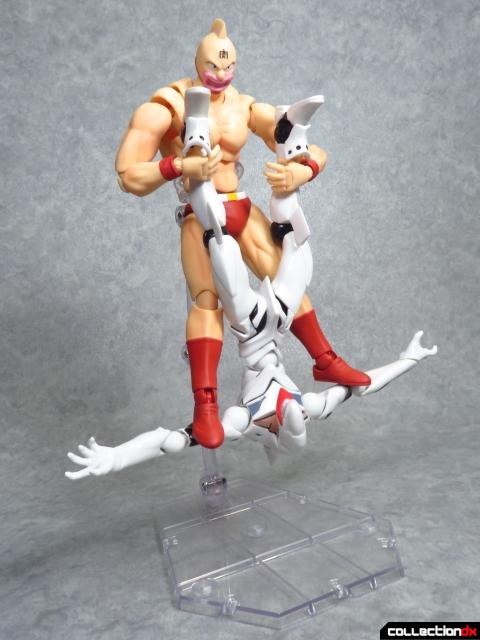 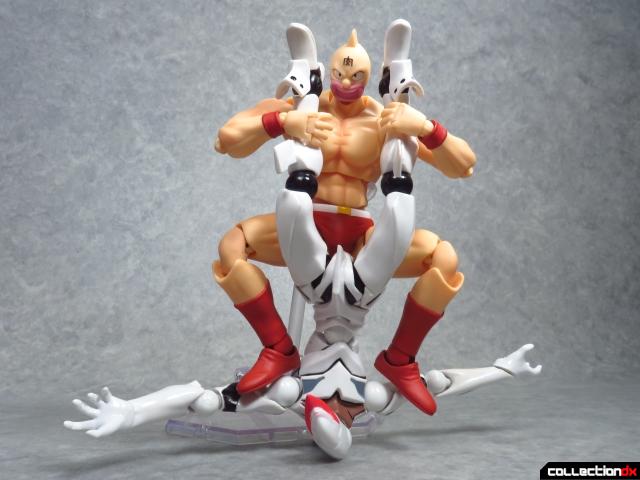 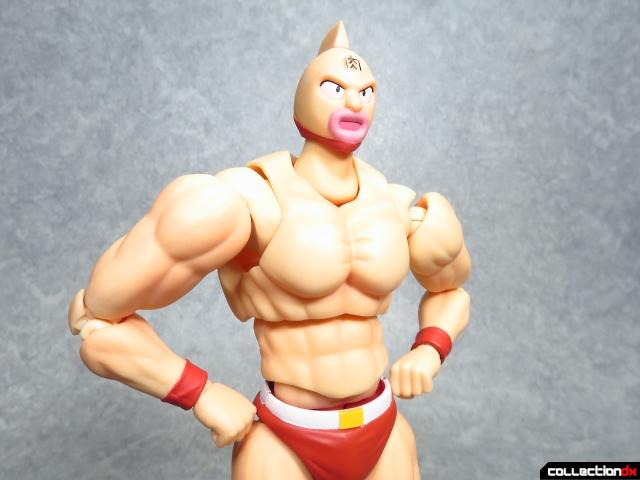 "Hmmph! With competition this weak, I won't even need the push of my farts!"

I'm not sure what that means, but he seems really confident.

With the S.H. Figuarts Kinnikuman, what you see is what you get and that's exactly what this toy needed to be. He is a really fun, straightforward action figure that gets everything right. Probably the most surprisingly thing for me was how easy it is to put Kinnikuman in a variety of moves and holds, with the only impediment being the flexibility of your chosen opponent. The only thing that leaves me wanting more is the number of expressions the toy comes with. Kinnikuman is just as goofy as he is a serious fighter, which is something the Revoltech figure managed to achieve with some success. Nitpicking aside, I can't think of anything bad to say about this toy. Bandai has a whole lineup of other Choujin wrestlers on the horizon and with this body design as a base, they should be all ready to rumble.

I'm very glad to have confirmation that Kinnikuman can do the Gyudon dance, it's the only reason I've been hesitant to grab one of these for myself. Great review!

If only he came with a few bowls of gyudon to chow down on.