Q-Transformer (Qトランスフォーマー) is a multimedia venture from TakaraTomy that centers around a mobile phone remake of the (in)famous Famicom game, Transformers: Mystery of Convoy. Tying in with the game is both a toy line and a cartoon starring cutesy Super Deformed Transformers. A slew of staple characters have already gotten the Q-(ute) treatment, including my personal favorite: Hot Rod. 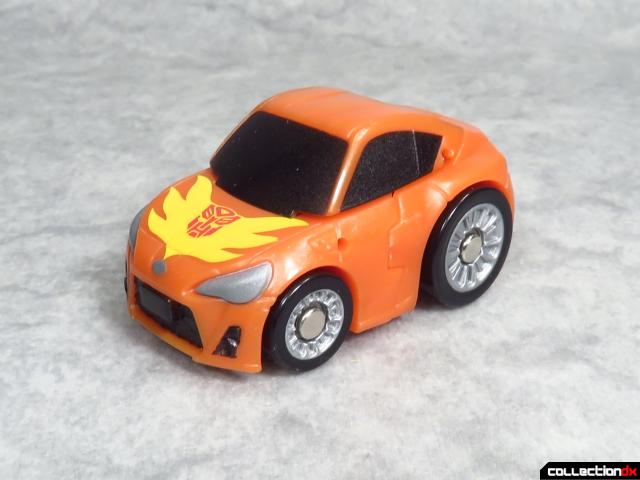 The Q-Transformer Hot Rod (or Hot Rodimus) comes packaged in car mode and is a little under two inches long in this form. Most of the vehicles used in this line appear to be officially licensed (or at the very least explicitly identified), so Hot Rod takes the form of a Toyota 86 GT rather than a futuristic car. 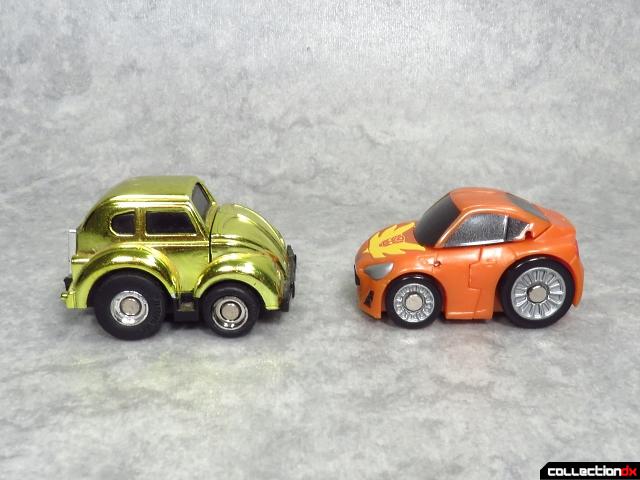 Design wise, Q-Transformers are most certainly in the Choro-Q (Penny Racers) camp with squashed proportions and oversized rear wheels. Putting Hot Rod next to G2 Bumblebee who shows that this new toy line is keeping the legacy of Mini Car Robo alive. 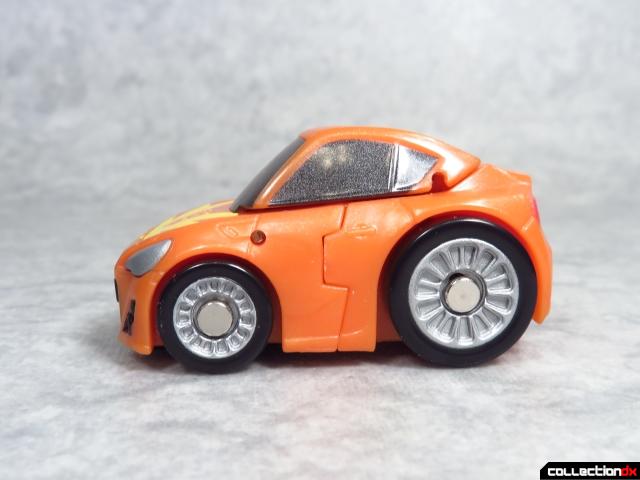 Hot Rod is fairly detailed for his size with proper rims and even tiny door handles. 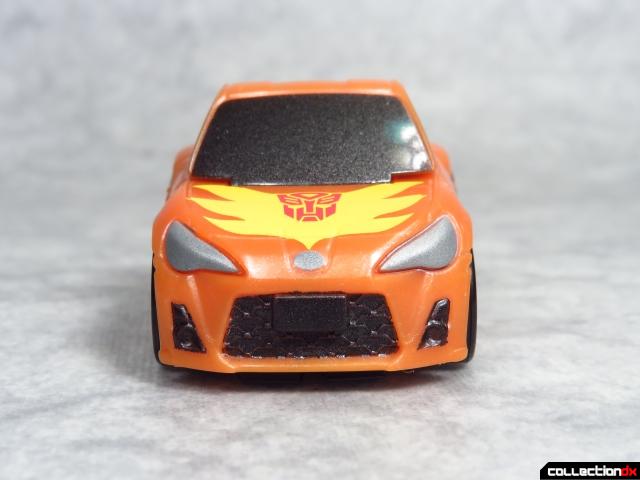 Despite the change in alternate mode, Hot Rod still sports his signature flame decal which is done here with a clean tampo print. Also, the authentic car bits continue with an accurate grille and even a tiny spot for a license plate. 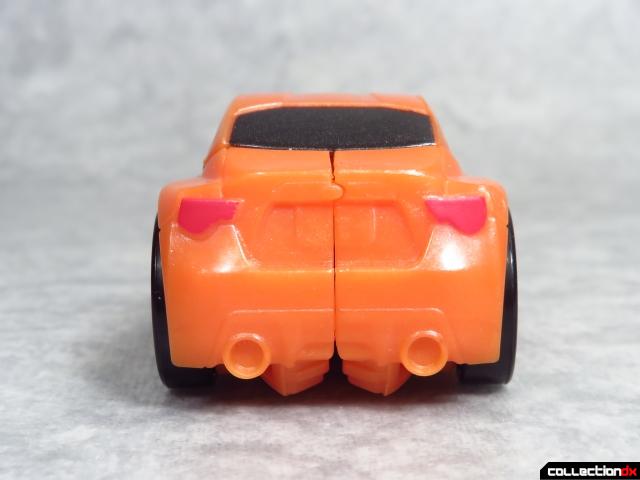 In the back, Hot Rod is rocking some sweet dual exhaust pipes. 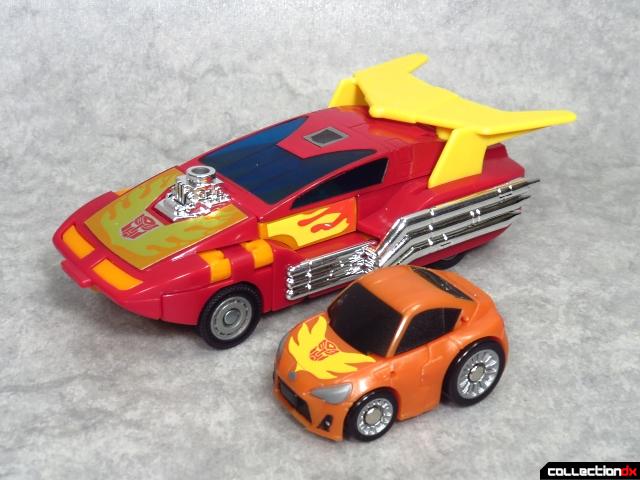 If there is one thing I sincerely miss, it's that this version of the turbo-revving young punk lacks his trademark spoiler (or so it would seem). 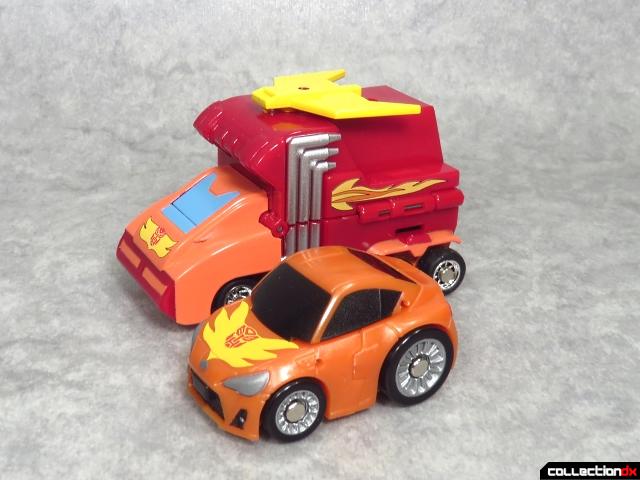 Hot Rod looks pretty good with the Choro-Q Robo Rodimus even though these toys are nearly a decade apart in terms of age. 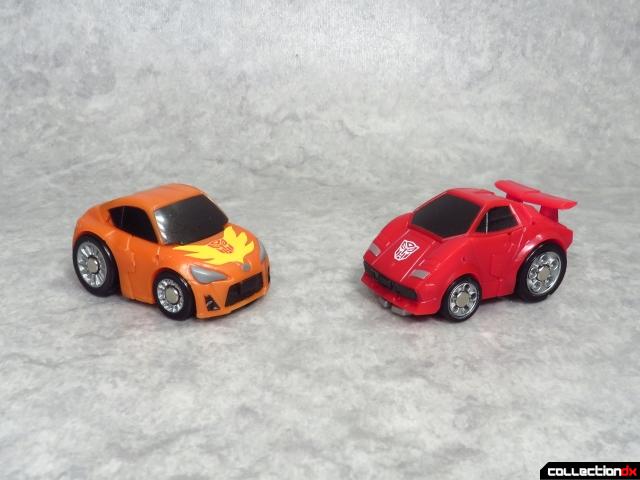 I also purchased the Sideswipe (Lambor) Q-Transformer at the same time as Hot Rod to get a better feel for the line. You can see how the overall aesthetic is pretty consistent between all the figures. 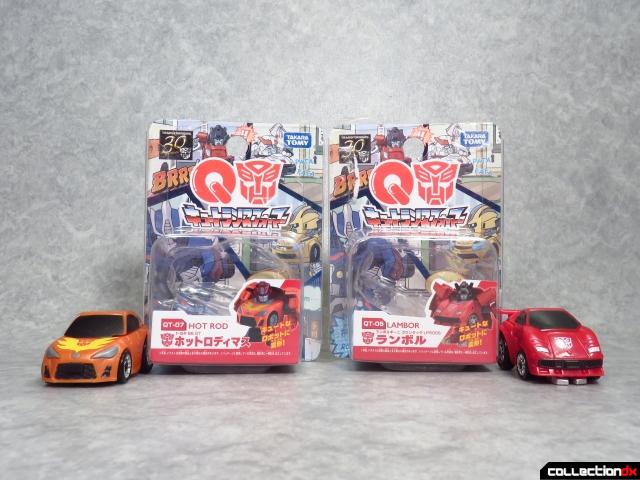 And here are the the tiny blister cards they come packaged on. Note that for some reason Hot Rod has both his American name and Japanese name (Hot Rodimus) but Sideswipe is only referred to by the latter. 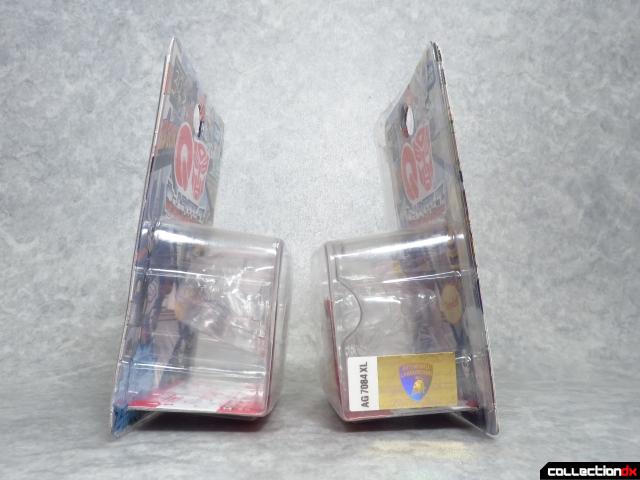 Also Sideswipe has an official licensing sticker from Lamborghini because I guess the famous Italian car maker is much more stringent than Toyota. 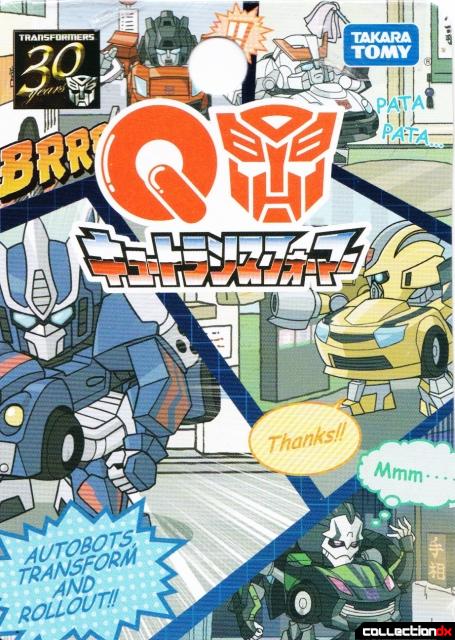 Other neat things about the packaging are how the card has a collection of goofy scenes in the style of the cartoon. Like with many Japanese toys, you can simply cut the tape securing the card back and slide it out of the plastic sleeve without damage. 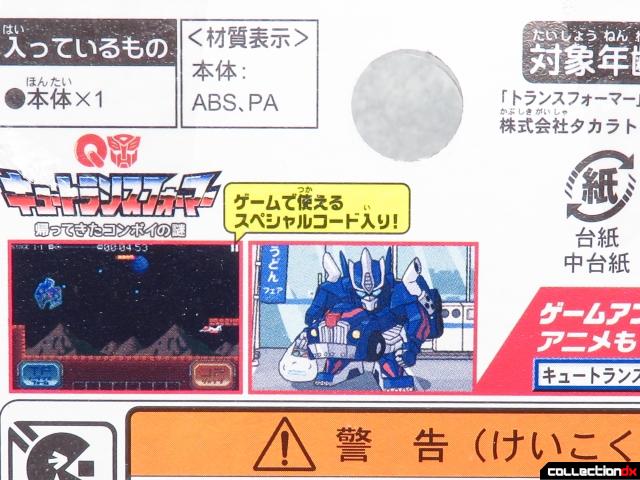 The back advertises how each figure comes with a special code that allows you to purchase things in the Q-Transformers: Mystery of Convoy game. 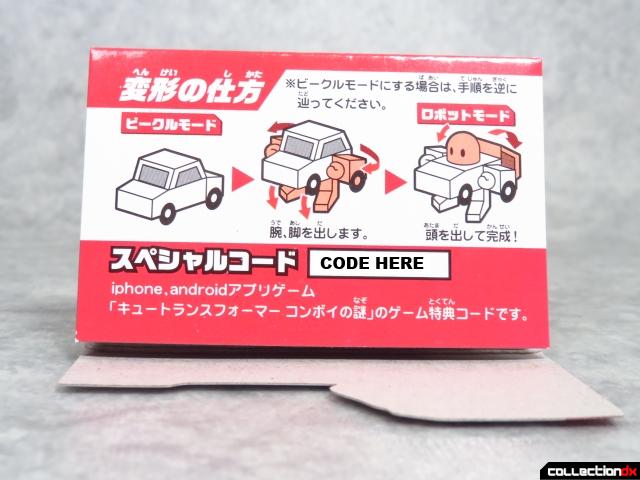 The code is located on the front cardboard insert. The toy itself resides over it so you can't sneak a peak without buying the toy. Also check out the charming generic robot they use on the instructions. Clearly we need a toy of Boximus Convoy. 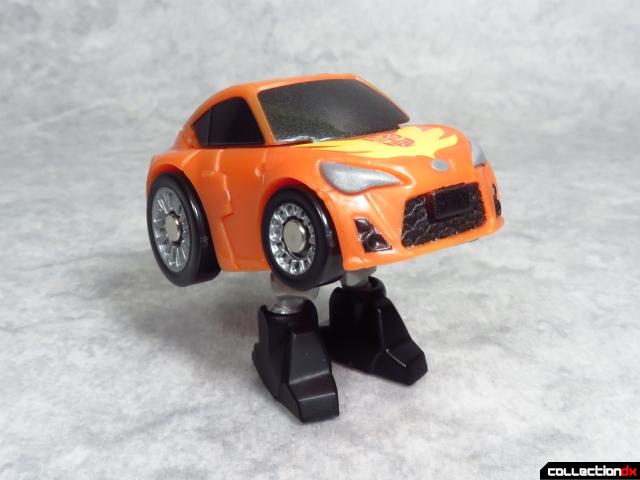 Transforming one of these figures is pleasingly simple. You can even do fun things like leaving the rest of the vehicle untouched while deploying just the robot's legs. Any car would act high and mighty after suddenly gaining the power to walk. 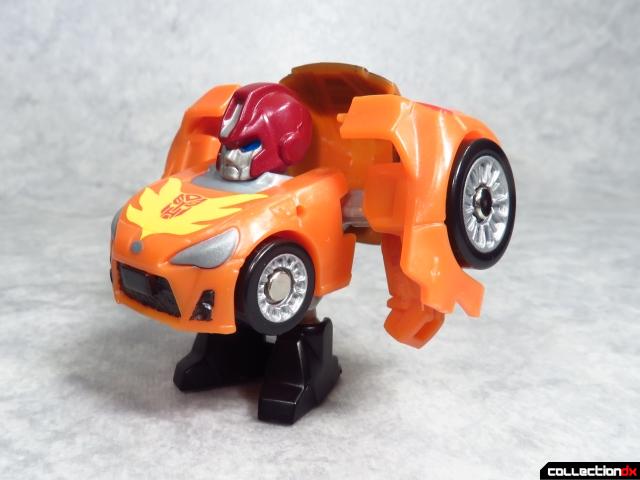 Continue on the way to robot mode by pulling out the rear sides of the car, swinging out the robot's forearms, and flipping down the back the roof which will cause the head to tilt forward. The resulting Autobot is a cute and sturdy little desktop plaything. 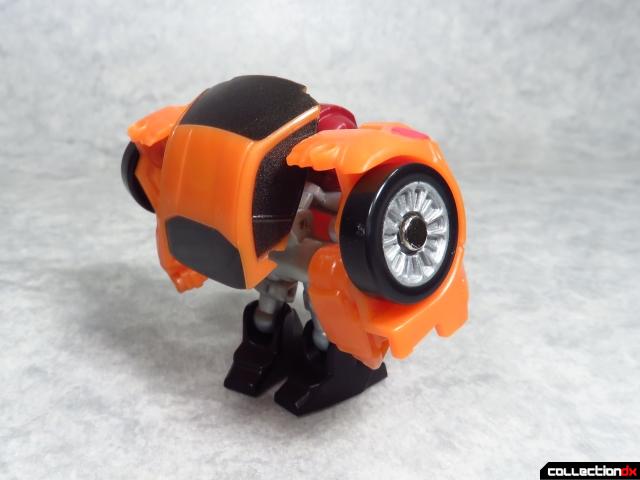 The majority of Q-Transformers have this body style so it's really all about picking the character you like. 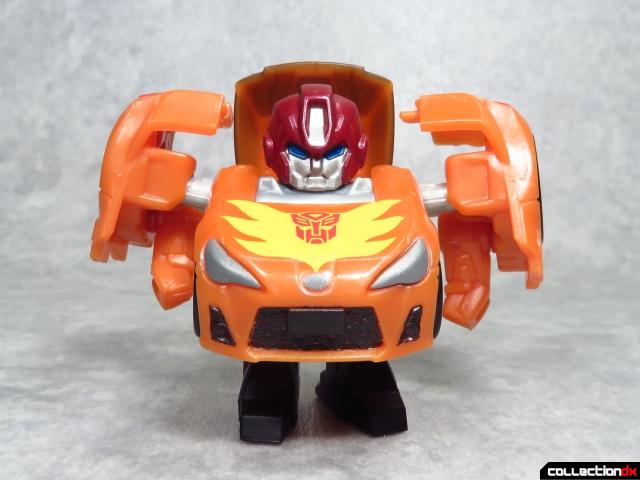 Despite looking a bit simple, this Hot Rod manages to keep a lot of details from the cartoon such as his black cavalier boots. 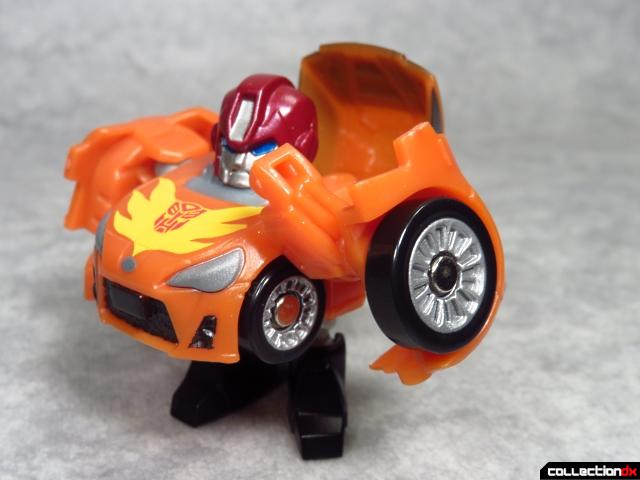 His arms even have the triple exhaust guns seen on most Hot Rod toys. While all these details are great, I do wish some more of them were picked out with paint just give the figure an extra bit of flourish. 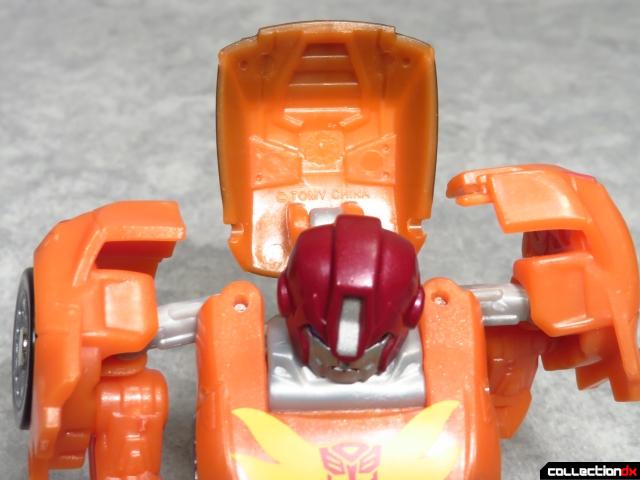 The part that really needs a bit of highlighting is the molded in spoiler located inside the car roof. I was glad to see TakaraTomy include one of Hot Rod's most salient traits, but the lack of color is a bit of a downer. Unfortunately, they decided to put the little mold test mark right in the middle of the spoiler so painting it in may highlight a very un-Transformer-y detail. 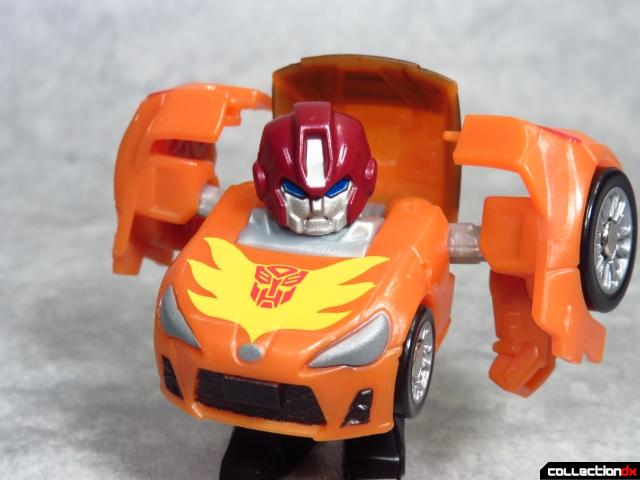 His head can swivel slightly to the left or right and looks fairly accurate to the character. Some Q-Transformers have updated face designs with Hot Rod gaining a pair of cheek guards that I'm kind of ambivalent to. 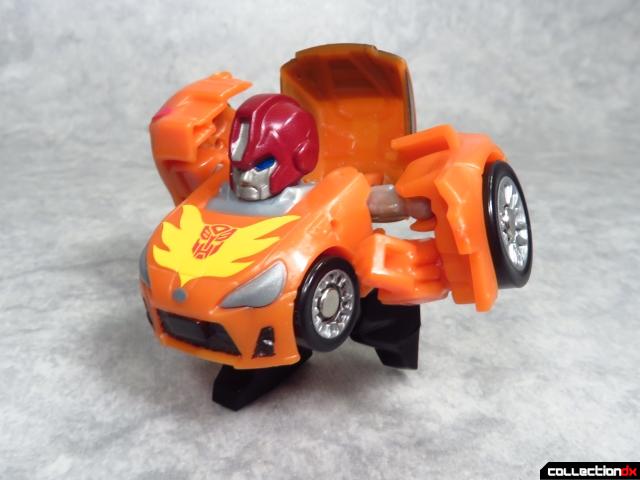 While not a posing powerhouse, Hot Rod has enough joints in his limbs (mostly from the transformation) to let him effect a running pose much like in the mobile phone game. His hips, knees, and shoulders have the greatest range of motion thanks to some ball-joint connections. 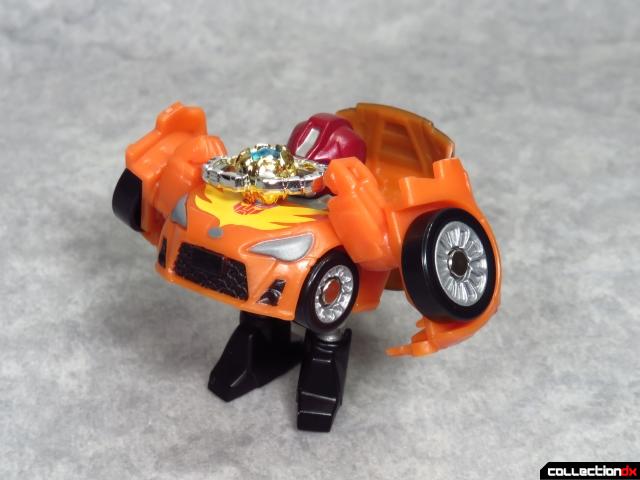 He can even open the Matrix of Leadership provided you have one sized for his little arms. 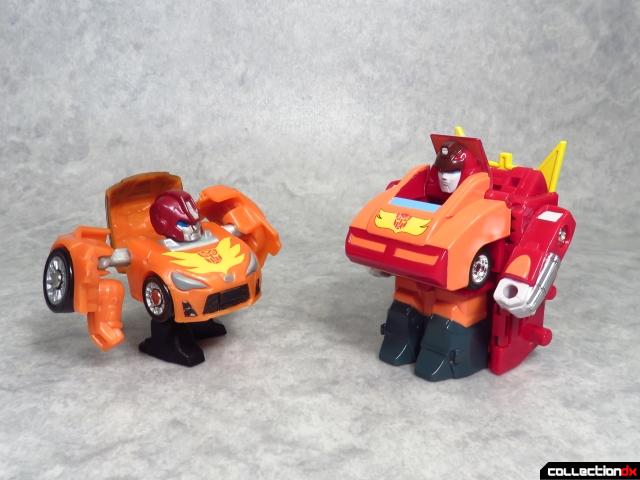 I'd like to think when Q-Transformer Hot Rod gets the Matrix he becomes Choro-Q Robo Rodimus Prime. 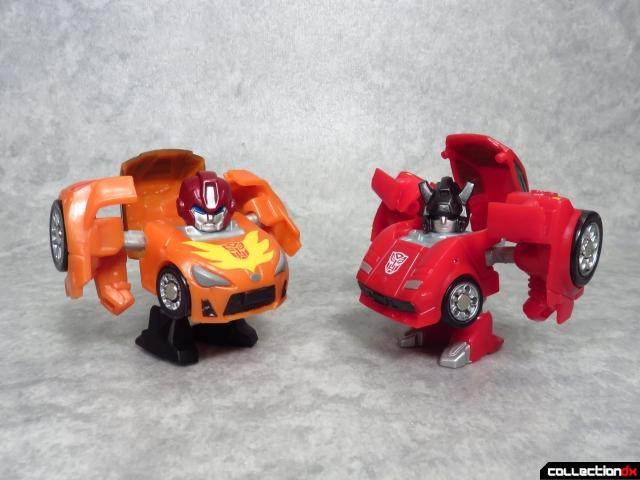 And again you can see how the toys of this line all have a similar look. Though I have to say, I think Hot Rod pulls it off a lot better than Sideswipe but I'll save those details for a review of the latter. 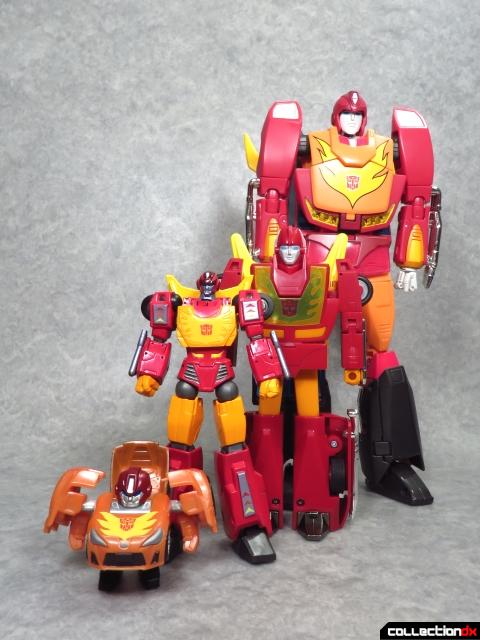 As a fan of the character, the Q-Transformer toy makes for another good addition to my growing Rodimus shrine as part of the Hot Rod wing.

Overall, I am definitely digging Q-Transformers and am glad to have picked up a few. There are some interesting prospects on the horizon for the toy line with characters like Ultra Magnus and Wheeljack set to appear in the cartoon (if they haven't already). At 800 yen a pop (roughly $7-8 USD), these are a nicely affordable bit of TF cuteness from Japan. They seem to sell out fast wherever they are stocked so be on the lookout if you see a character you want.