Grimlock is another in the line of non-transforming Transformers from Fewture under the EX Gokin Banner. I talked before about the merits of a Transformer that doesn't transform, so i'm not going to get into here. Rest assured, it's cool, and I think you will like it.

Grimlock comes in a great box that is not much larger than the toy itself. I appreciate the space saving packaging. If you've ever held other EX Gokin releases you know that their packaging is typically enormous. 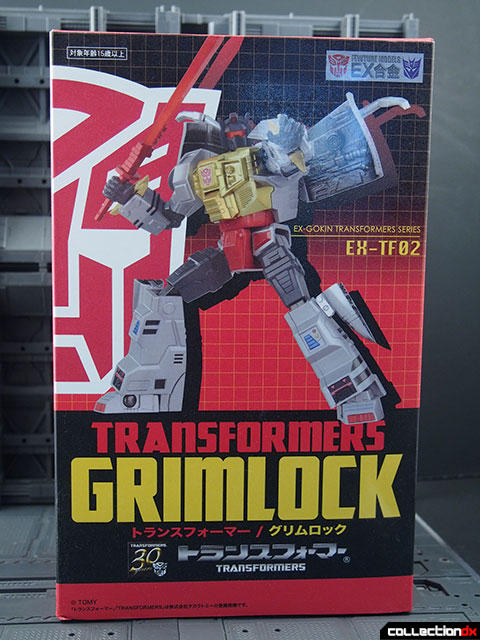 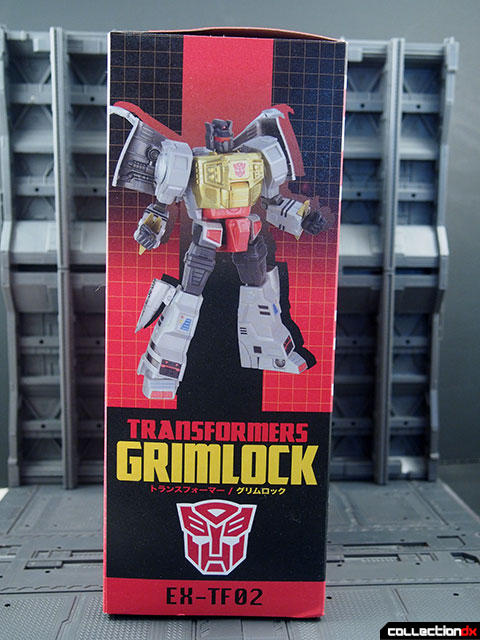 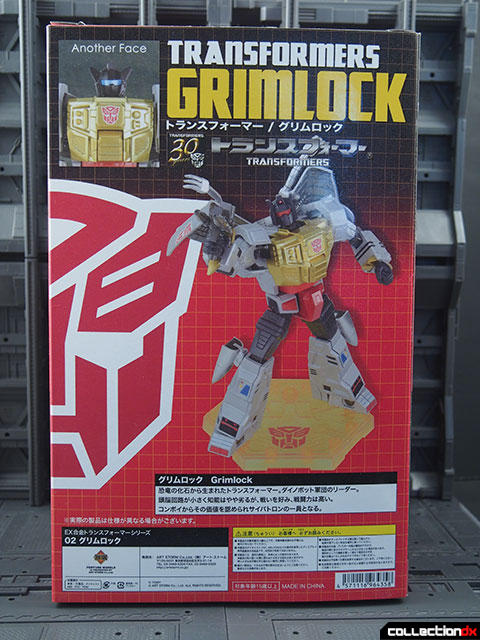 Fewture did a good job capturing the leader of the Dinobot's likeness, at least, according to the original G1 cartoon. While Prime was a pretty faithful reproduction of the cartoon look, Grimlock strives to be somewhere in the middle between anime and toy accurate. It has the proportions of the cartoon, with the detail of the toy. It's a satisfying result, however I sort of wish it had LESS detail to be more in line with Prime. 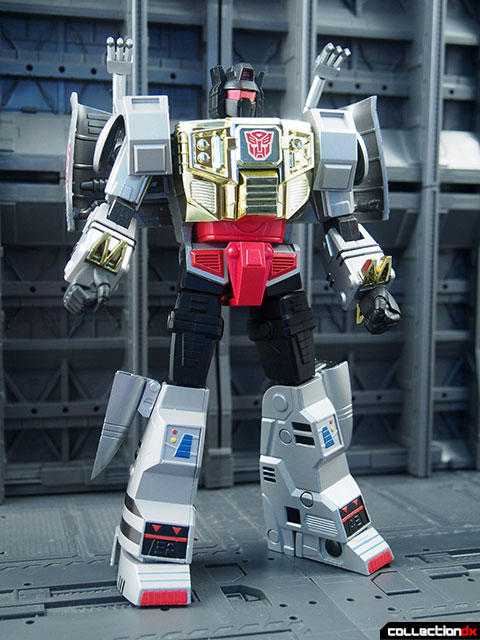 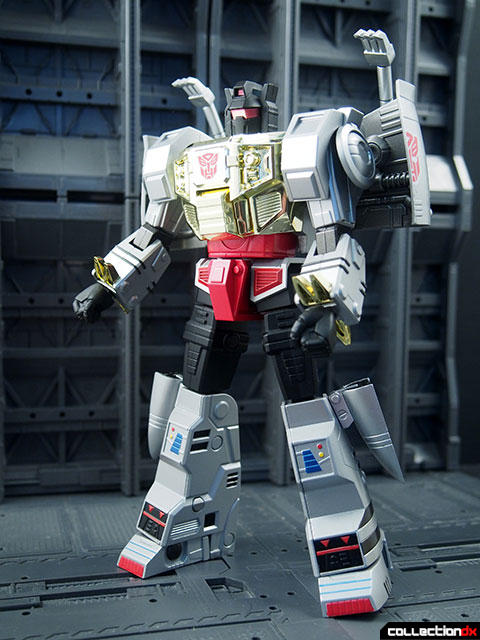 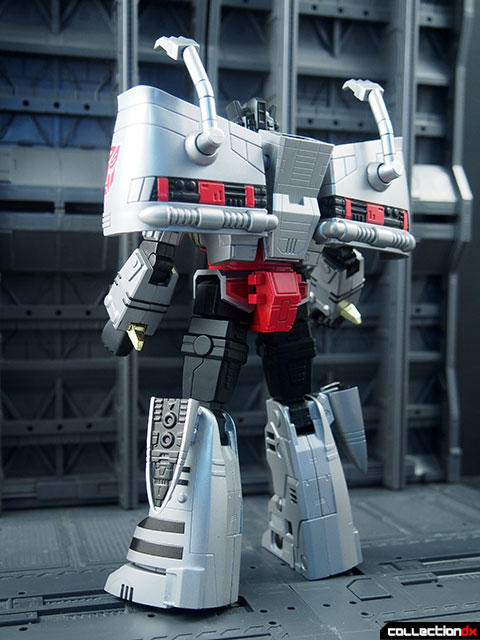 As if Fewture wanted to drive home the point of it's design, they provided two heads for Grimlock. The red visor is as how he appears as a Generation 1 Toy, the blue visor is as he appears in the cartoon. Either looks fine, but I think I prefer the blue. 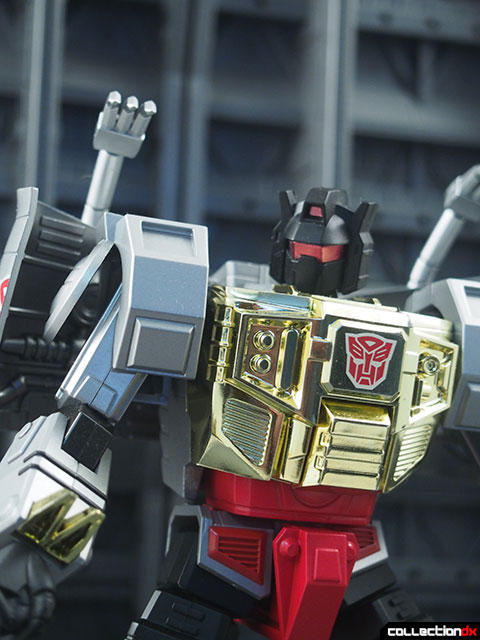 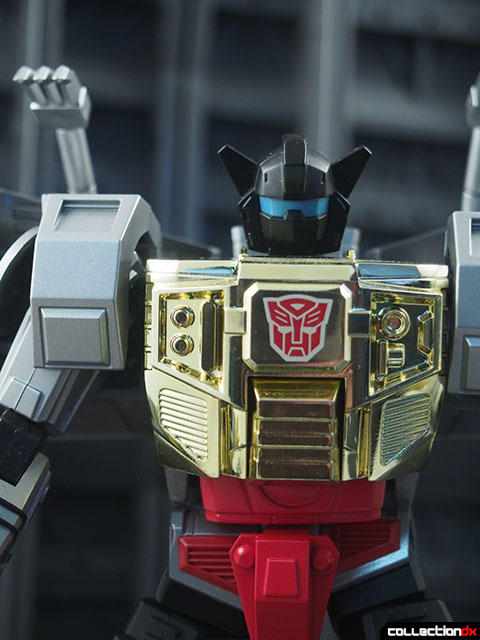 Being non-transformable, he has much more articulation than his classic counterpart. The head turns on a ball joint, and the chest has an ab crunch joint. 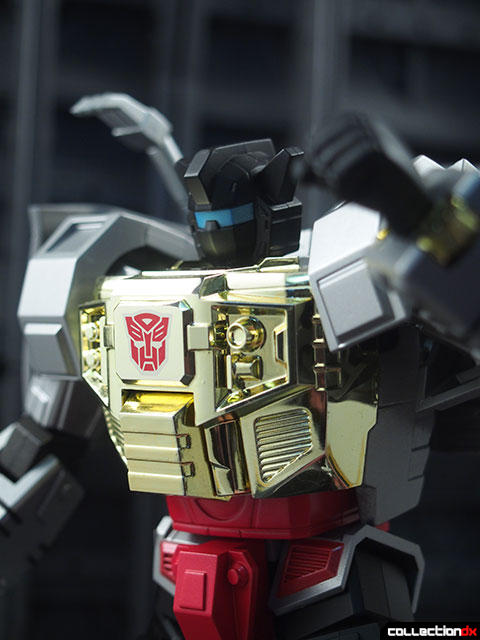 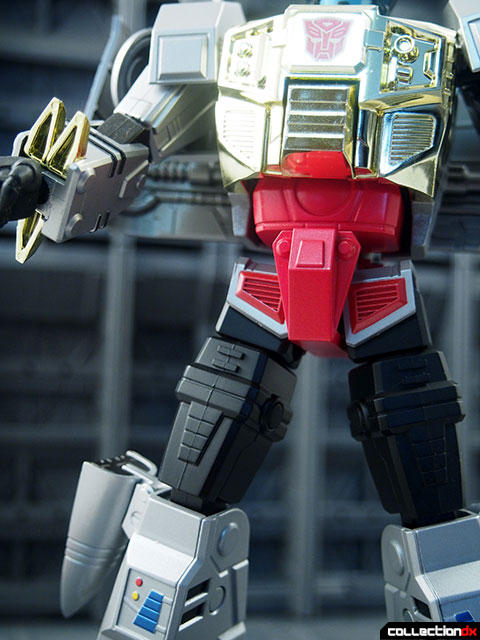 The shoulders don't have the forward swinging hinges that Prime does, but they do have panels on the outside of the shoulder that move to allow for arm motion. 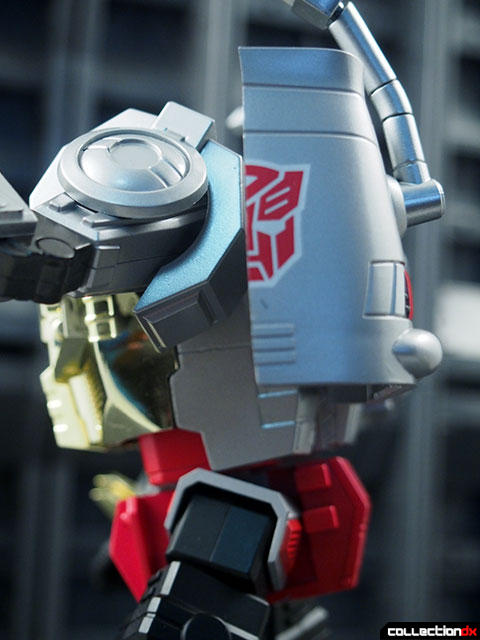 Each wing on the back is moveable on a ball joint, and even the little chrome dinosaur arms are moveable. 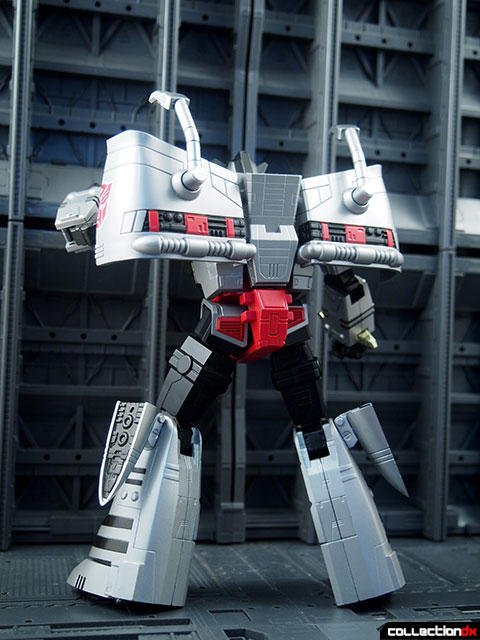 The hips and knees again have the extendable joints that allow for a wide range of motion. This enables Grimlock to take a knee and even do the Iron Man Pose. 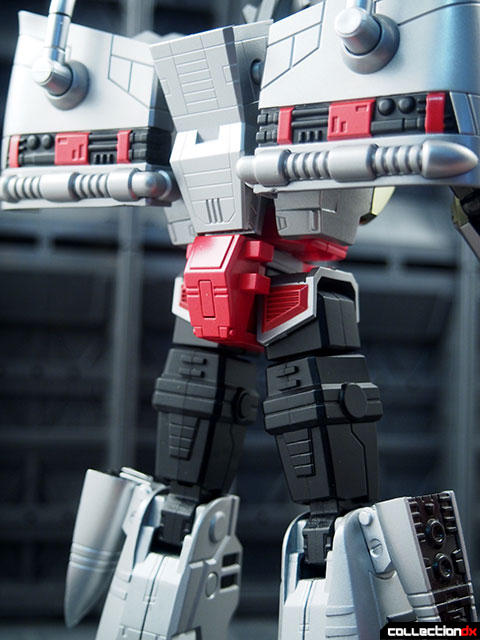 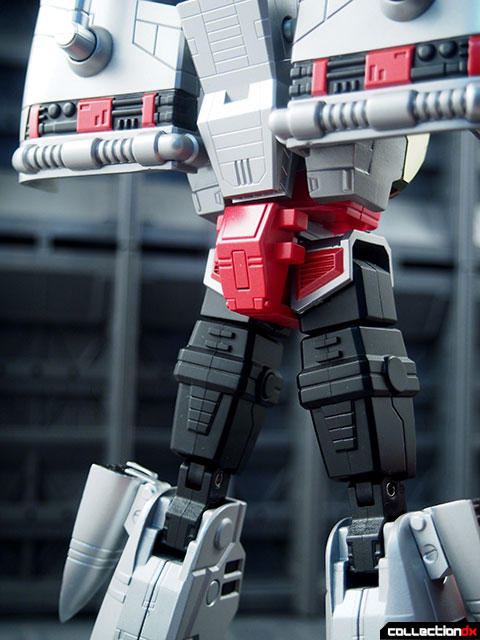 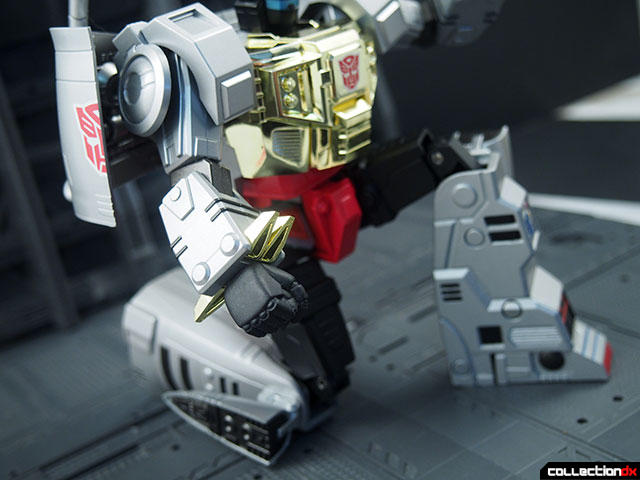 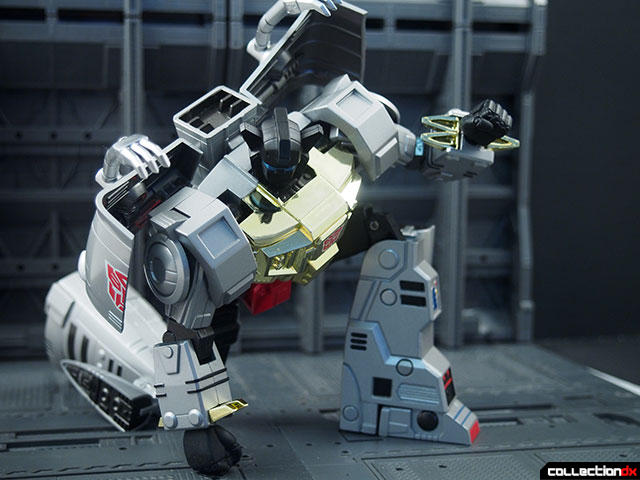 Grimlock's feet are on a ball joint, and are heavy metal. The plastic section the ball attaches to the lower leg on a sliding mechanism that lets you extend the foot out. However the connection between the ball and the foot is weak and pulling on the foot results in the foot coming off rather than extending. This appears to only be an issue with one foot. 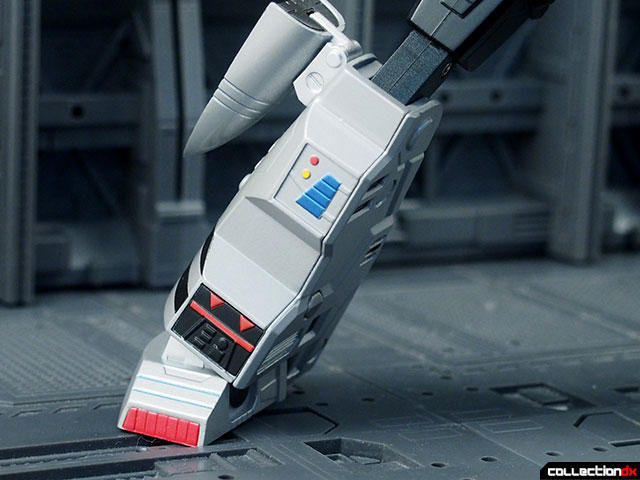 A few weapons are included as well as the variant hands to hold them. First off is the gigantic sword. Made of semi-translucent plastic, the sword has a slight spray to give it some color fade. 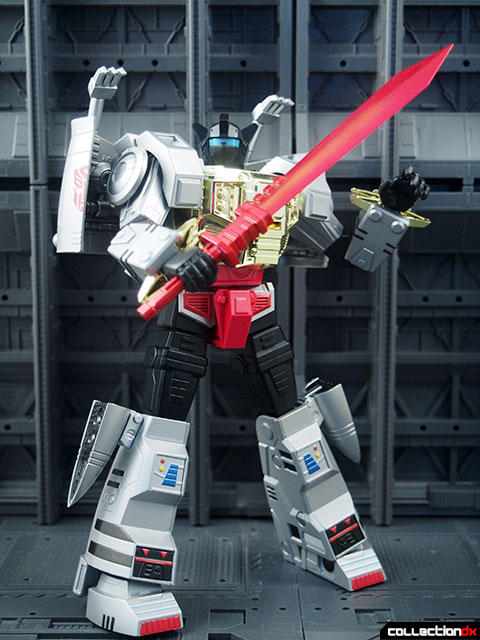 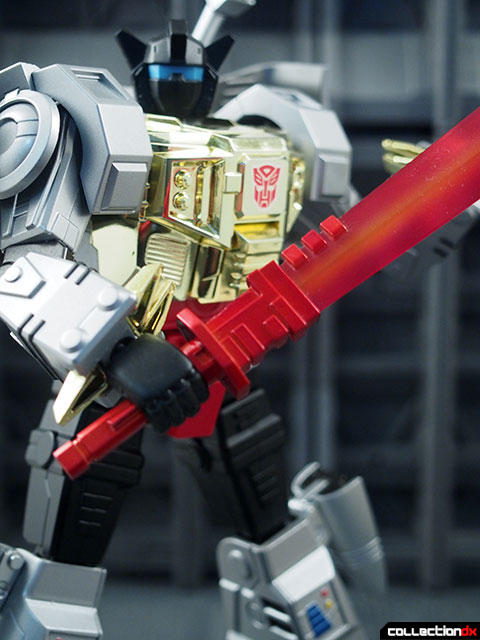 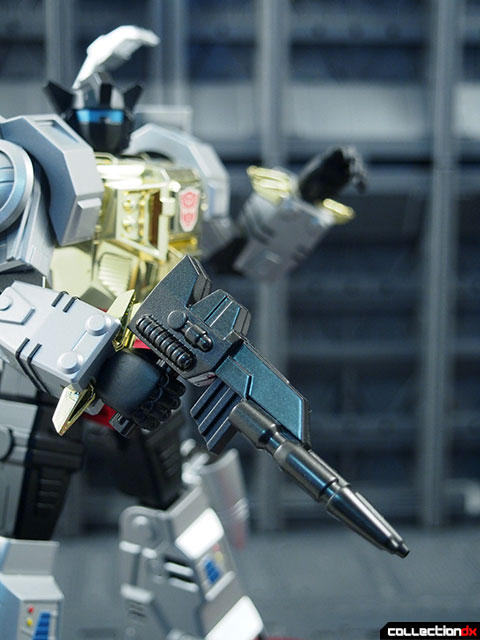 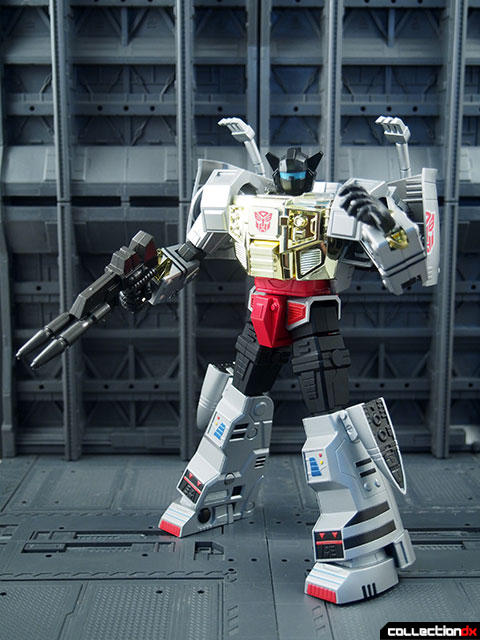 The other weapon I think is meant to replicate the missile launcher that came with the original toy. This is only a hand-held weapon and shoots no projectile. 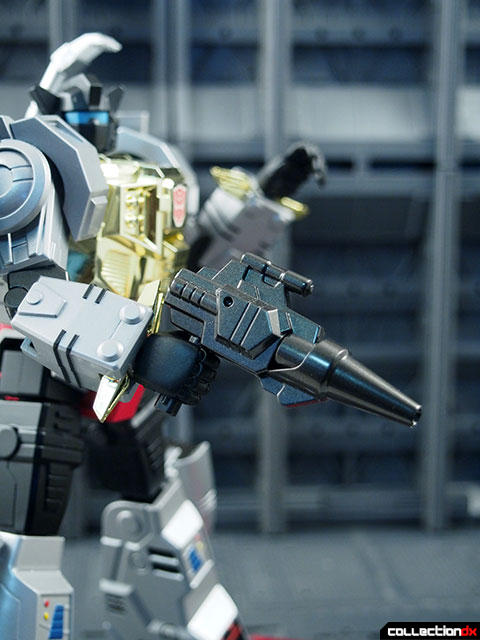 Finally, a pointing finger for his "DUBS GET" American Psycho meme 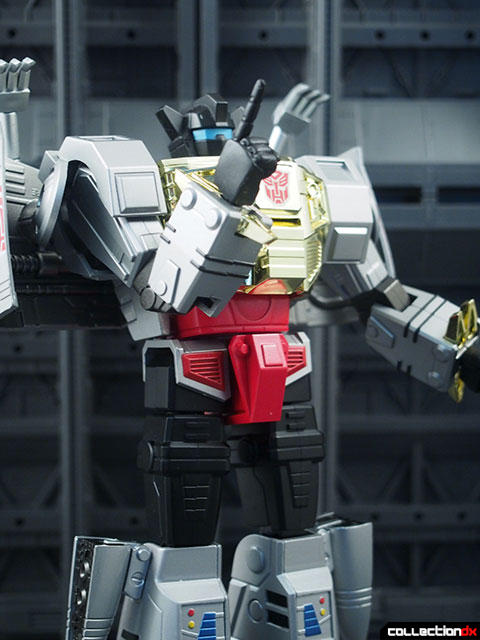 In the Prime review, I forgot to mention the translucent yellow stand. It's exactly the same in both releases. Each comes with a poseable arm and a small connector to link other bases. The figure needs no base though, so back in the box it goes. 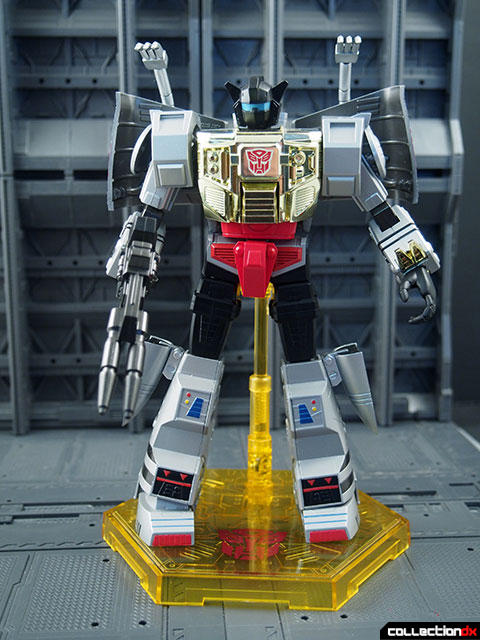 I really hope Fewture sticks with this great line and goes through all the classic G1 characters. This could be epic.

3 comments posted
Is the gold chest plastic or

Is the gold chest plastic or metal?

Both of those heads were featured in the cartoon. The one with the rounder face was the early design before Grimlock started looking more like his toy. I guess they only gave the latter a red visor to differentiate and make it the figure based one. It'd be cool if you could have blue visors on both though.