As the finale for the Chogokin 40th Anniversary, Bandai has teamed with Hajime Katoki to release the Chogokin G Class Henkei Rathalos. I’m not really familiar with the Monster Hunter series, but I do know it’s probably one of Capcom’s two largest franchises, rivaling Pokemon in sales numbers. The Rathalos itself is a flying wyvern from Monster Hunter, debuting in the original game and making an appearance in every title released. As the most recognizable monster from the series, the Rathalos seems to be the best candidate for a Chogokin release, though I honestly have no idea if this is supposed to be a robot of some sort of a human. 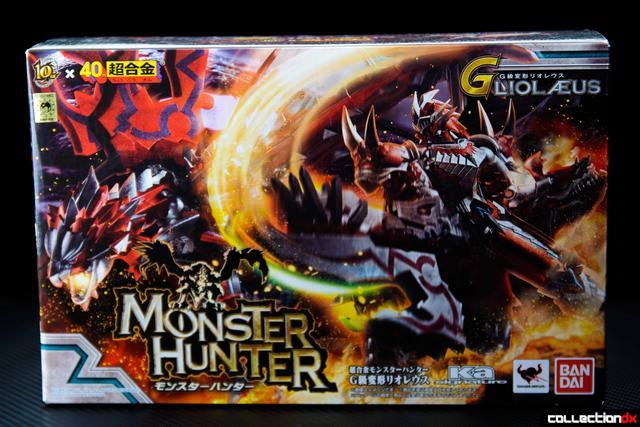 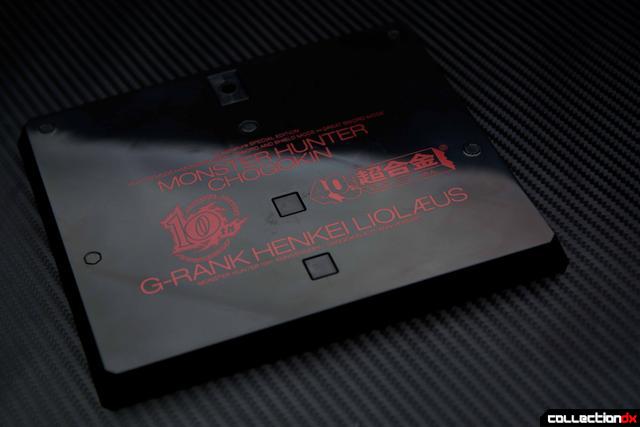 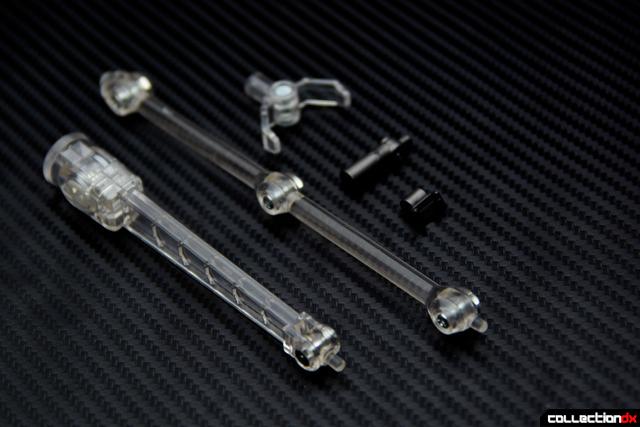 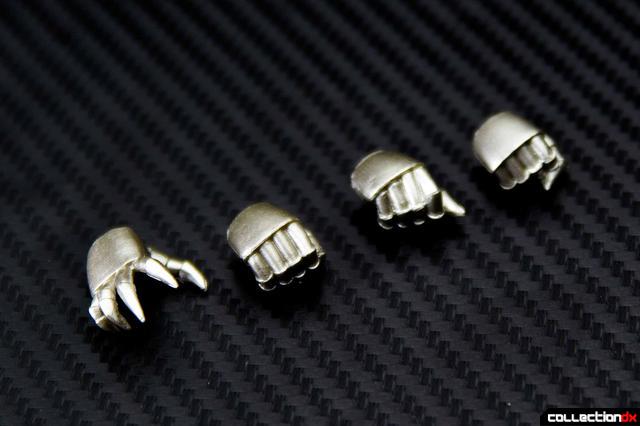 The box features some pretty cool artwork and way too many logos for all the various companies and events involved. The included is stand is gorgeous looking and comes with a RD and SHF Tamashii stand arm along with adapters. Also included are four right hands, with two fists that hold the sword at different angles. 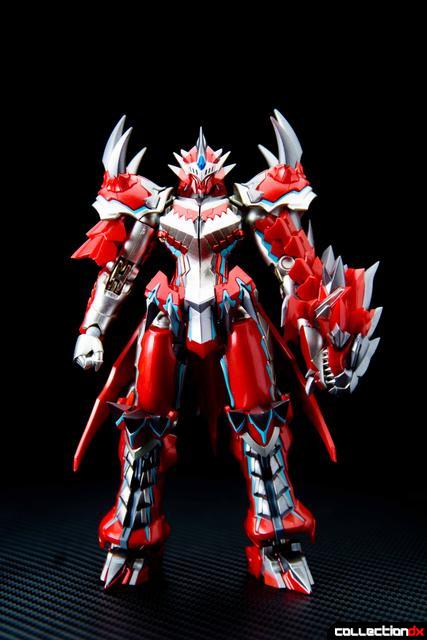 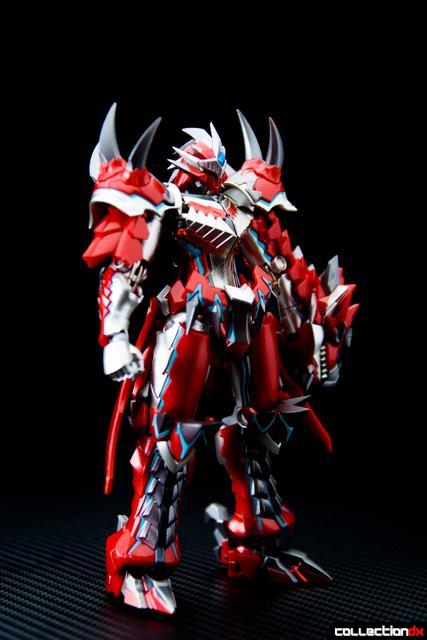 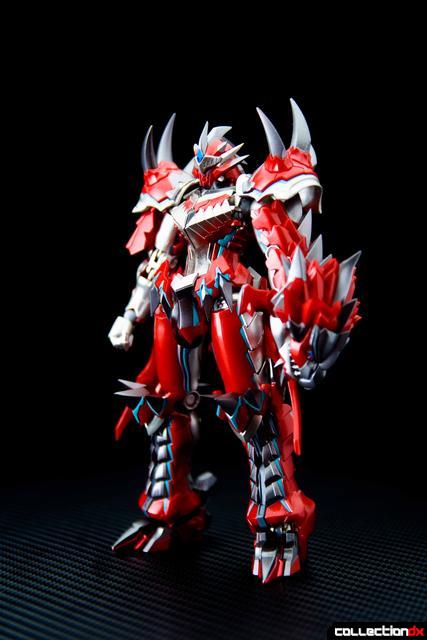 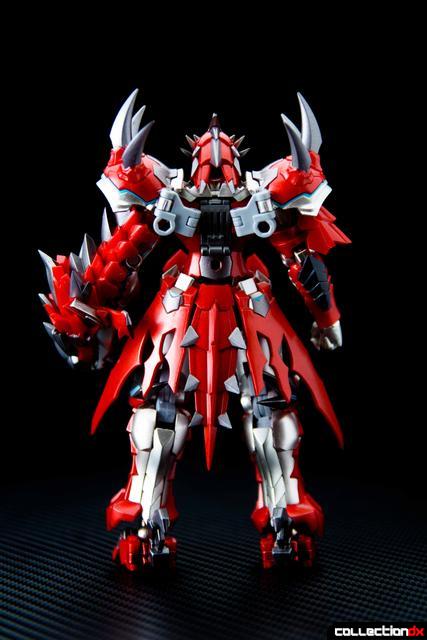 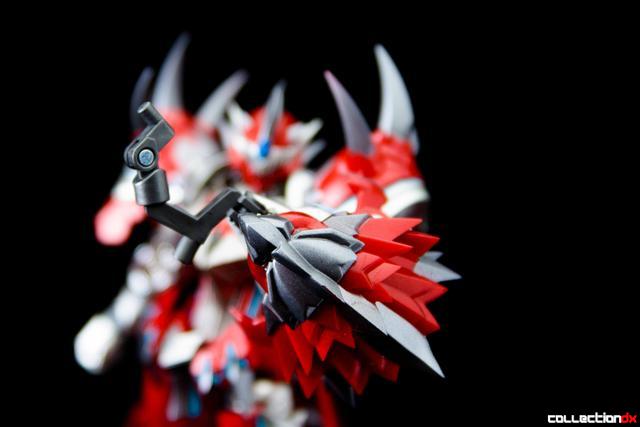 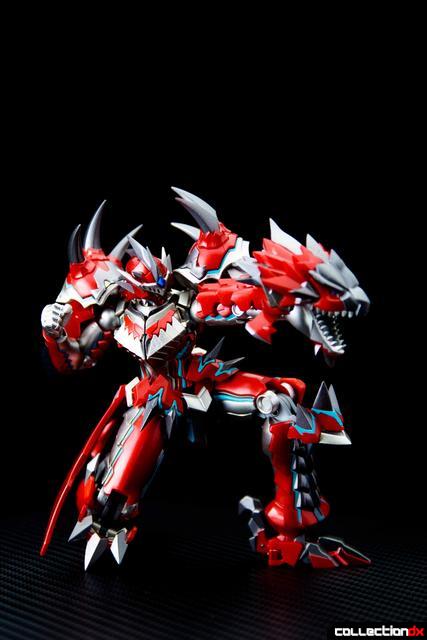 In Hunter form, the Rathalos is a very Katoki-esque design with scale armor and lots of pointy bits. The left hand is the wyvern head which reminds me a lot of Beast Wars Megatron, and the reason only right hands are included. Articulation is actually pretty good given all the armor the figure has, and the joints are all very tight except for the right hand, which feels a bit floppy. Unfortunately, the design of the Rathalos means that there are lots and lots of fiddly little armor parts that don’t lock in place and require a lot of repositioning when trying to do any poses. The pointy armor parts are also rather sharp and combined with the tight joints, inflicts a lot of pain on the fingers trying to play with it. It’s a very frustrating and painful ordeal trying to him into any poses 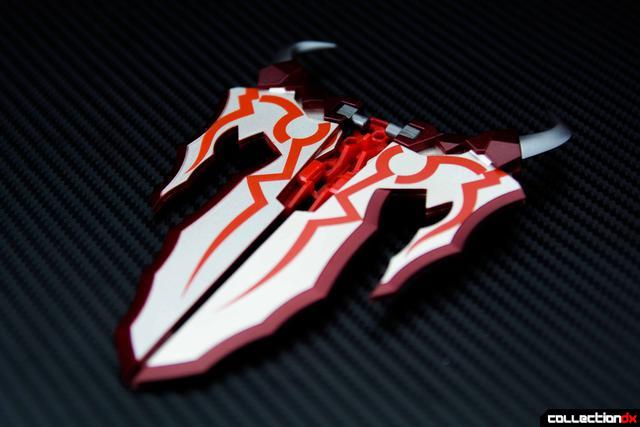 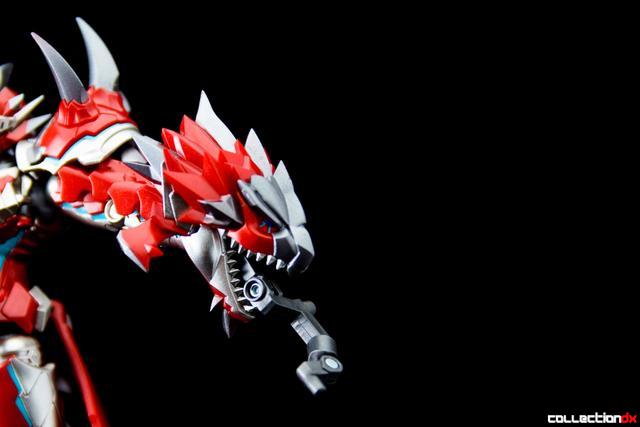 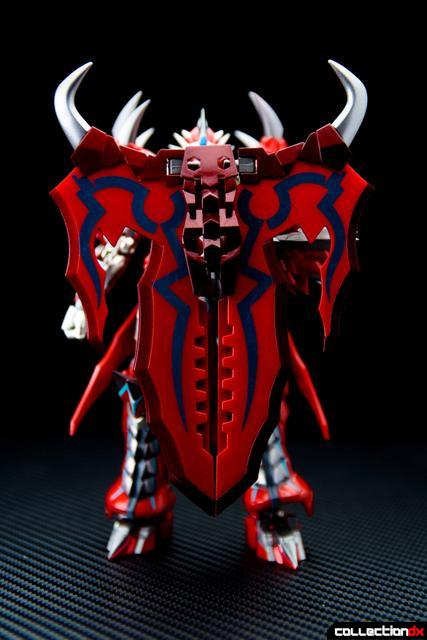 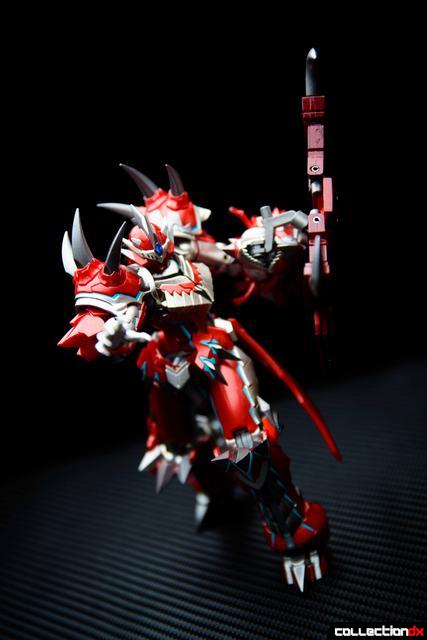 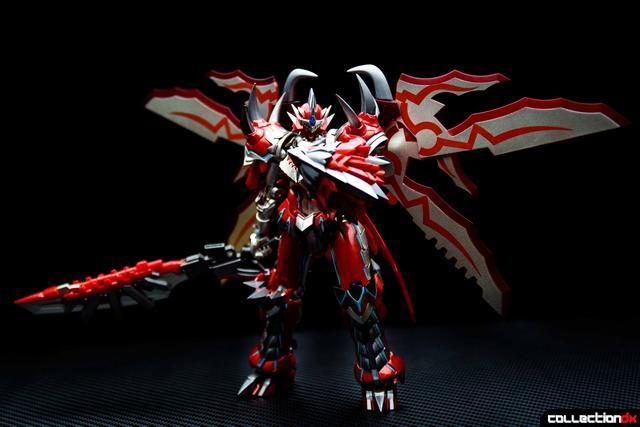 Rathalos wings form a gigantic shield in hunter form, which is attached by an articulated connector that fits in the wyvern mouth, given that he has no left hand. The shield is really bulky and cumbersome, making it very difficult to pose in any interesting poses. It’s also a rather heavy for such a small connector so the shield often pops off or the arms start drooping from all the weight. It looks cool, but it’s such a pain I don’t ever want to keep it in shield form and it’s probably the reason there are very few pictures of Rathalos holding the shield in dynamic poses online. Splitting the shield apart also allows you to attach the wings to shoulders. 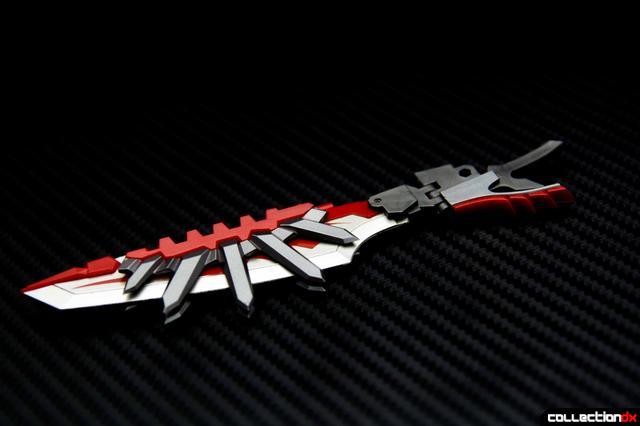 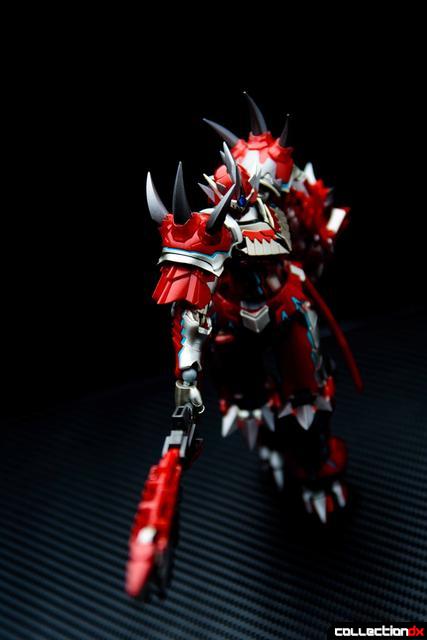 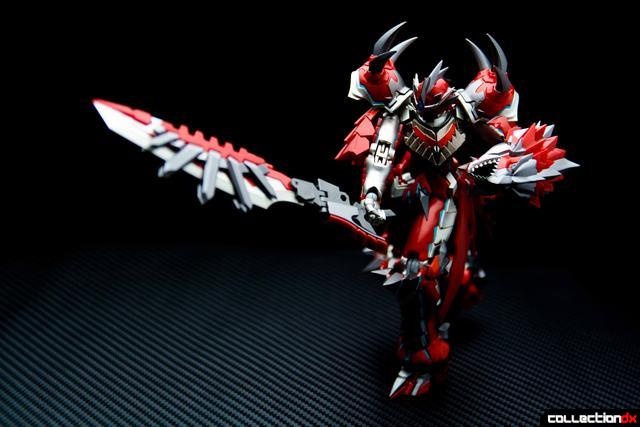 The tail of Rathalos becomes a sword which can be held in two positions with the alternate hands. Unfortunately the loose wrists make it difficult to hold the sword with the sword tilted to the sides. 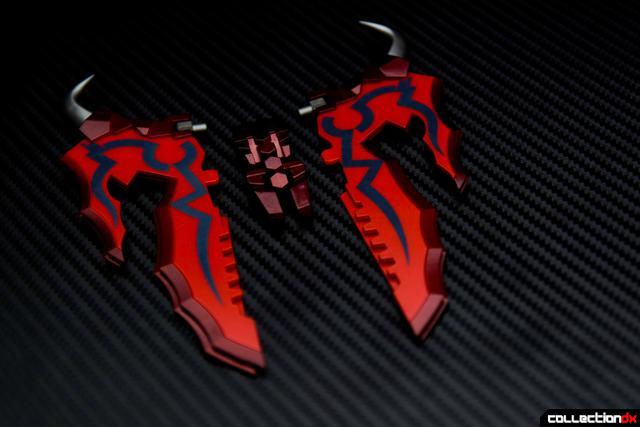 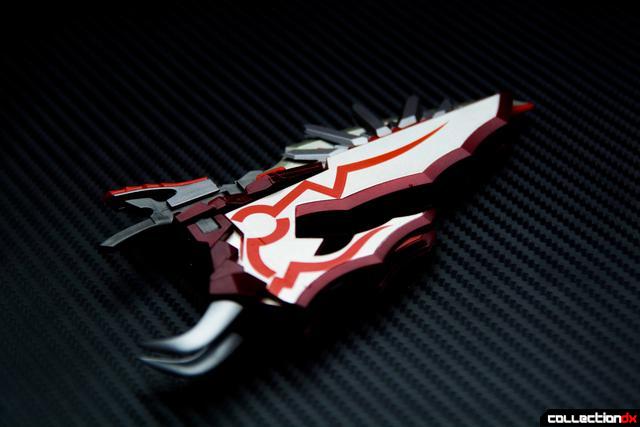 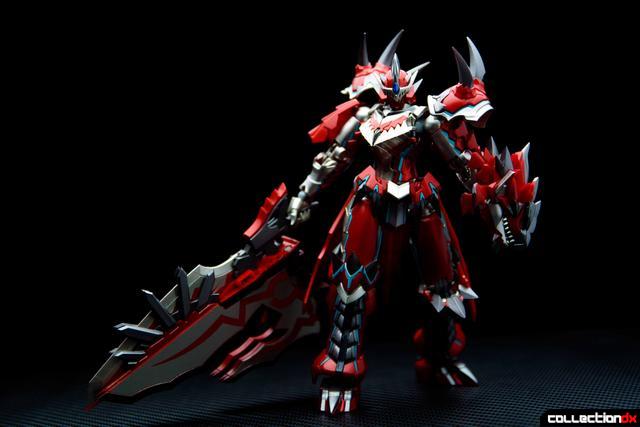 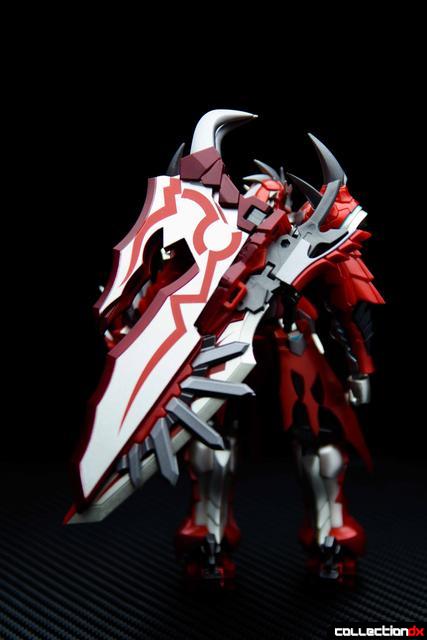 The sword and shield can also combine into a gigantic great sword. It’s really cool looking, but again, with the loose wrists, it’s even more difficult to hold. Using the shield connector also allows you to attach the great sword on the back as well. 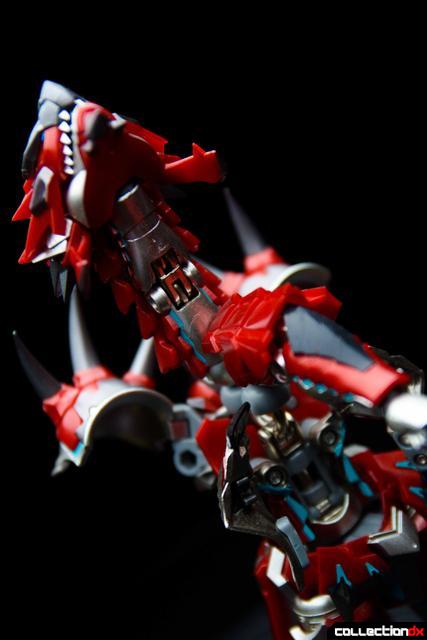 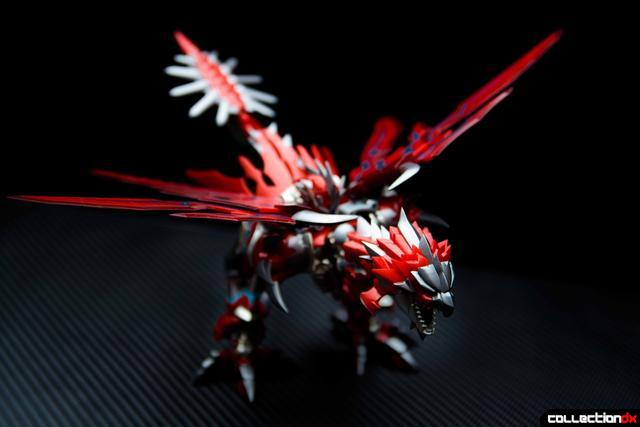 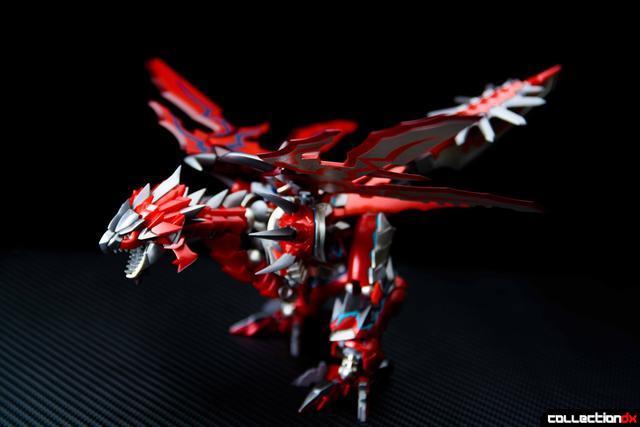 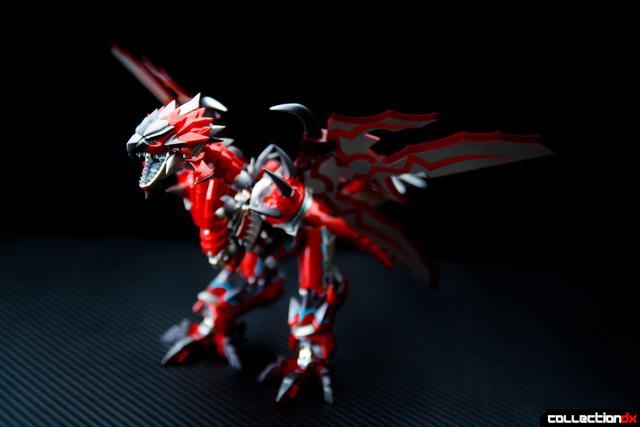 Transformation into wyvern mode is moderately complex. The upper body transformation can be a bit tricky and feels like something you would expect from a DX Chogokin Valkyries. Since nothing really locks into the place, Rathalos still feels very fiddly in wyvern mode and actually isn’t very fun to play with. It’s also not the most convincing alt mode, with a lot some unsightly gaps around the wings.

I’m not quite sure how I feel about the Chogokin G Class Henkei Rathalos. Hunter mode looks pretty great and it’s a solid figure, but also not fun at all to pose. In fact, I rather disliked taking photos for this review because of how irritated I was, having to reposition all the annoying parts while inflicting pain upon my fingers. The floppy right wrists made holding the weapons pretty difficult and the shield connector isn’t much better. As a display piece, Rathalos is pretty good looking but I just don’t enjoy it as a toy. Bandai’s other unique 40th Anniversary Chogokin have been fantastic, and I especially loved Chogokin Hello Kitty. Unless you are a diehard Monster Hunter fan, this really should be a pass. A toy shouldn’t inflict more pain than actual enjoyment.

If it goes on clearance at HLJ and the shipping is right I've considered getting this as an Escaflowne stand-in. I can't imagine this could be worse than the Yamato version, especially in dragon mode. The Mojibakeru Monster Hunter figures are really cool too; in kanji mode they look awesome with Shinkenger figures and mecha.

I think you can grab one on amazon/ebay for around 70 shipped these days, but I really don't think he's worth paying over 40 dollars for.

Great review thank you. This is one of those design periods that just gets lost on me there is just so much going on it's hard to read the figure. Just my opinion I am sure it hits the right notes for a lot of fans. Sometimes less is more. Really great review though.

There is definitely a disconnect between older collectors and younger ones. I'm glad they branching out the gokin choices, you can't always have 40 year old robots rehashed and expect to garner interests from newer and younger fans. The design seems to be in line with the style of MH armors at least, but it just didn't quite work out. I think maybe if they at least added some locking tabs or just took out the transformation gimmick, it could have been a much better toy.

Yeah well maybe but take GaoGaiGar newer design but atleast you can look at the figure and it makes sense and SOC outstanding execution. This thing is mass of red spikes, I mean like I said it reasonates with someone great but it looks like a visual mess and I don't see locking tabs solving that.

The photos looked interesting, so I came to check this out.

I think what this thing needs is a US release, so that those nasty spikes would have to be made of soft plastic and/or blunted, and thus make handling the toy less akin to handling a porcupine.

This figure already has a US release courtesy of Bluefin!

Is it a true US release modified to conform to US toy safety standards, or a straight-up import with maybe a different box?

As this is an imported toy being distributed to the US originally intended to be a collector's piece for adults with a 16+ age recommendation, there is no need to conform to toy safety standards.

Well then, there goes my interest.

Posted by ZeldaTheSwordsman on 22 August, 2015 - 00:25
from my limited understanding

from my limited understanding of the franchise, you hunt the monster and take parts from it to craft weapons and armor. i think this figure depicts both the monster and a hunter wearing the armor and weapons crafted from it, with a bit of polish courtesy of Katoki-san to blend the design features to suit the transforming gimmick.

that said, it just begs you to ask who this figure is for, if you want a hunter or a monster you want them implemented well on their own, bandai's SH Figuarts or SH Monsterarts lines should have been utilized for this type of thing, but i guess theres the element of shrinking shelf space, and japanese design sensibilities of multiporposing to maximize space in general, and this seems to be the result of that in my opinion

It's a weird awkward Gokin. Not quite one thing or the other. As someone said, not really sure who the target audience is. But it is a figure that has been available a number of times on deep deep discount (I think I paid less than $30 usd from hlj last year.) at that price it is a cool and distinct display piece. Just not one that you will pick up and play with much. The transformation is complex, fiddly and annoying, to a not real satisfying payoff. The left dragon head arm looks cool at first, but gets real annoying to do anything with. And the add on gear such as the shield, sword, wings etc just give you a headache. Especially anything needing spindly special connectors. You will transform it to dragon once and only once. You will then leave it in hunter/human/robot? Form, find a moderately acceptable way to attach all of its assorted gear to it, and stand it on your Gokin shelf... In the back... Behind Leoparden and Boss Borot. It's a nice piece if you can get it dirt cheap. But by no means don't seek it out or pay full price for it.