Bandai appears to be in for a long voyage with the Kantai Collection license with numerous Armor Girl Project figures being announced just as a new Fleet Girl hit the market. Back when I reviewed the first KanColle AGP figure, Yamato, I found her to be an alright figure that felt lacking in places and didn't quite live up to the Tamashii Nations pedigree. It's been a few months since then and now Bandai has deployed their second vessel to the unspoken cold war they are having with Max Factory over the KanColle brand.

Atago is named after the real life Takao class heavy cruiser used by the Imperial Japanese Navy in World War 2. She is known for her bubbly disposition and "heavy tanks" (her words, not mine). Among her fellow Fleet Girls, Atago acts like a big sister to the new recruits and tries to encourage them when she can. 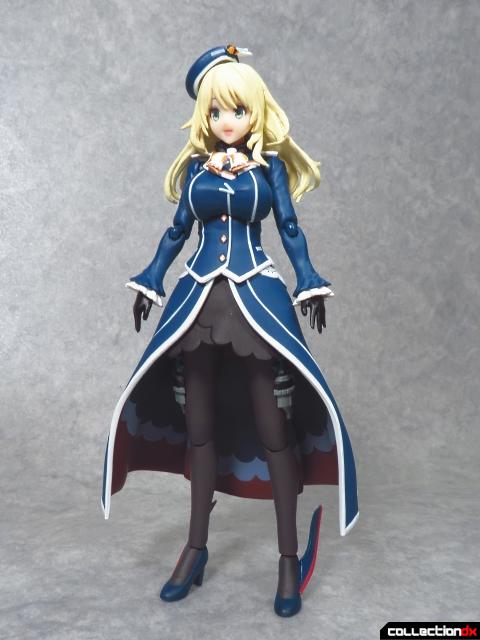 The Armor Girl Project Atago stands roughly five and a half inches tall, and is built like a typical Japanese action figure with PVC limbs and hard plastic joints. Unlike with Yamato, there are no last minute color changes here so Atago's dress is still matte blue like in the promo images. I was genuinely surprised at how much better her build quality is than the first KanColle AGP. 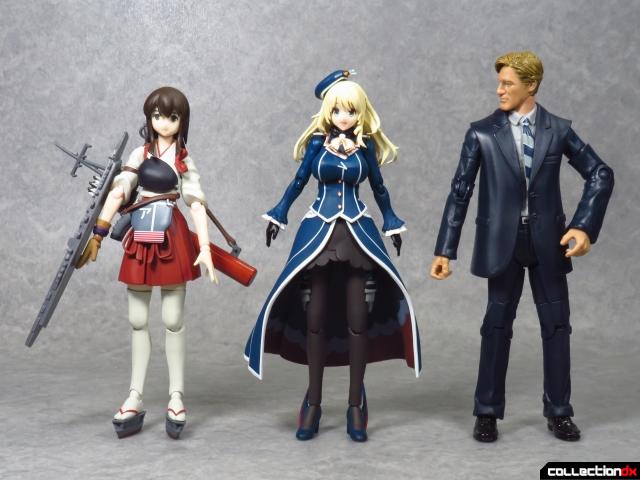 She is sized to go along with other ~1/12 scale figures such as KanColle figmas like Akagi. 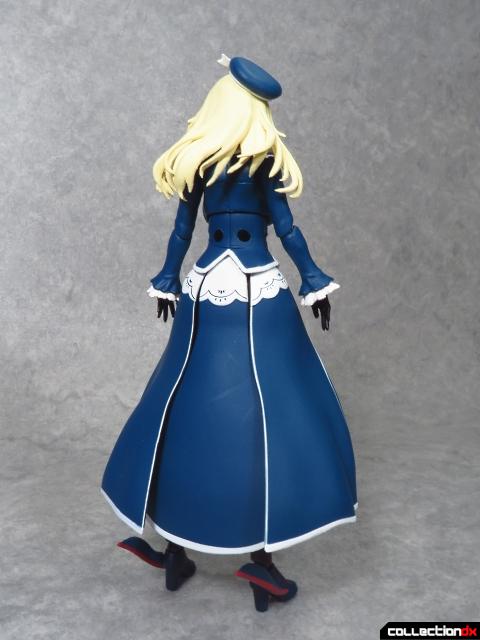 Atago is one of the more normal looking of the Fleet Girls when not wearing the majority of her ship parts. Her long skirt is split into three pieces of soft plastic so as not to impede articulation. They're partially layered to try and keep the illusion of one continuous piece of clothing. 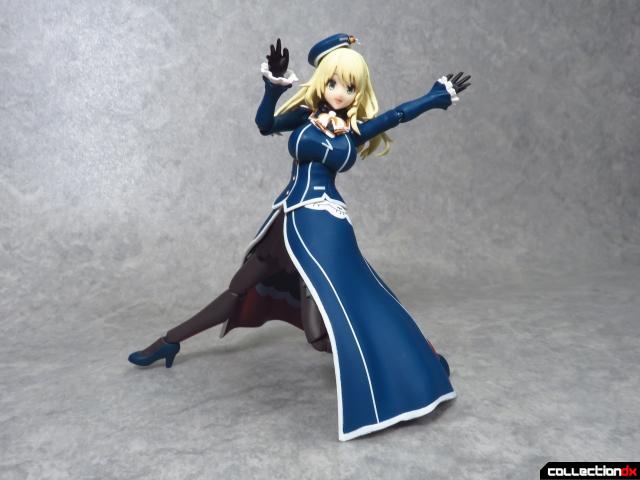 Articulation wise, this ship has a pretty good range of motion given her outfit. The only joint that feels particularly restricted if Atago's neck, which has to contend with her long blonde hair. 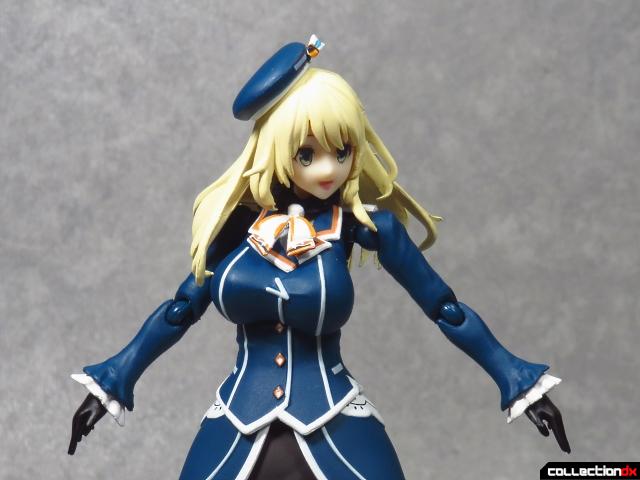 Both of Atago's arms can be pulled out until they click into place farther away from her body. This comes in handy with some poses and when dealing with certain accessories. 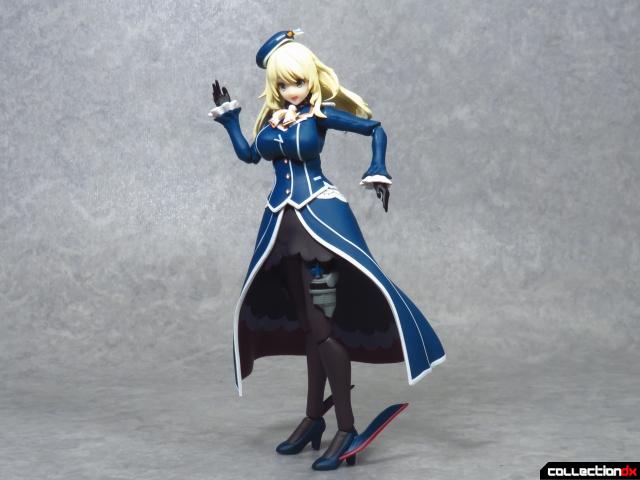 Thanks to a smart design, Atago's waist is pretty much unrestricted and is also well hidden under the many layers of her clothes. In fact, it can be easy to forget she even has this bit of articulation as it is so subtly implemented. 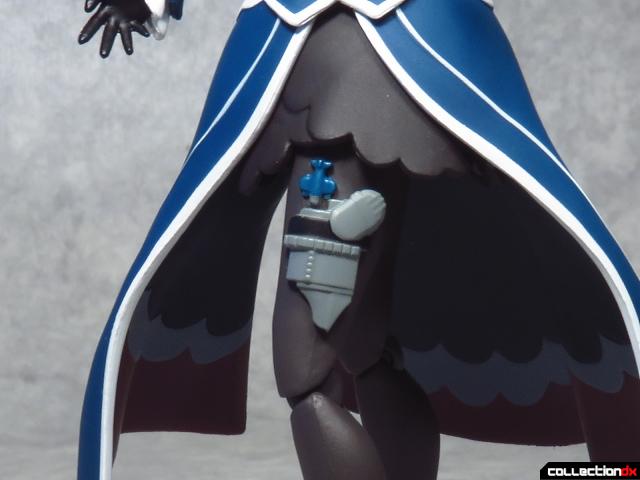 In addition to the fins on her shoes, the only other boat based accoutrements that are not removable are these bridge styled garters. The real life Atago carried a few floatplanes for scouting purposes so the Fleet Girl has these little blue aircraft as part of her outfit. 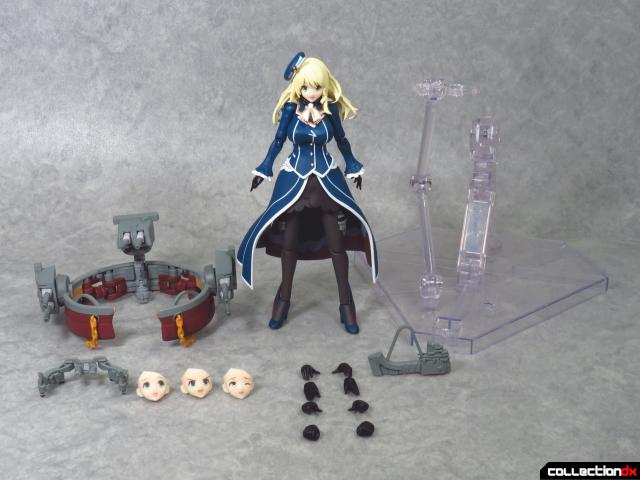 Atago is a fairly lean package accessory wise but that is true to the character. She comes with: 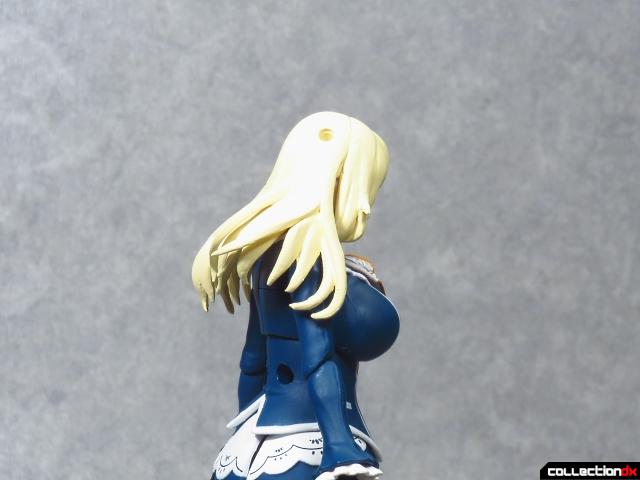 Certain bits like Atago's beret come separate from the figure out of the box. This jaunty cap plugs into the obvious hole in her head. 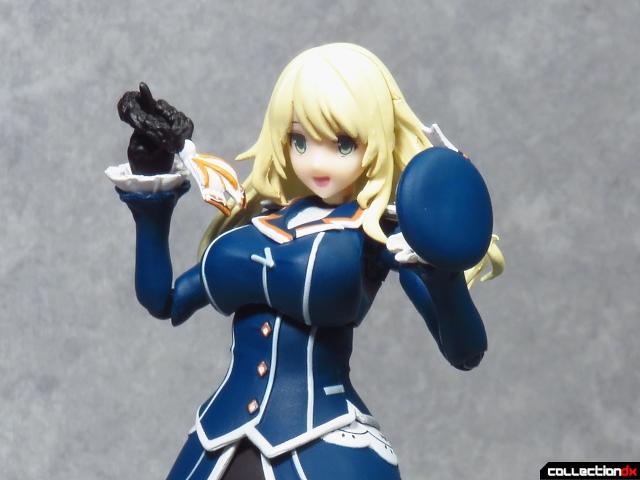 The instructions show that you can also pop Atago's head off in order to remove the ribbon from around her neck. I appreciate that she can look pretty normal without her hat so long as you view her from certain angles. 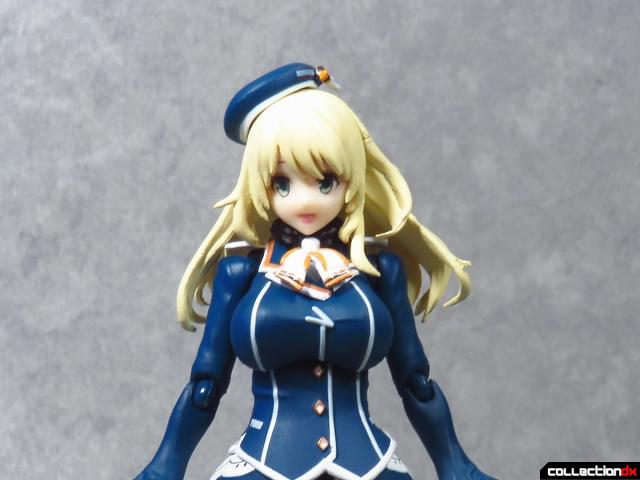 Atago has a total of four different faces that are exchanged in the usual manner of popping off the front part of her hair and then swapping in the desired expression. She has a happy, open mouthed smile by default. 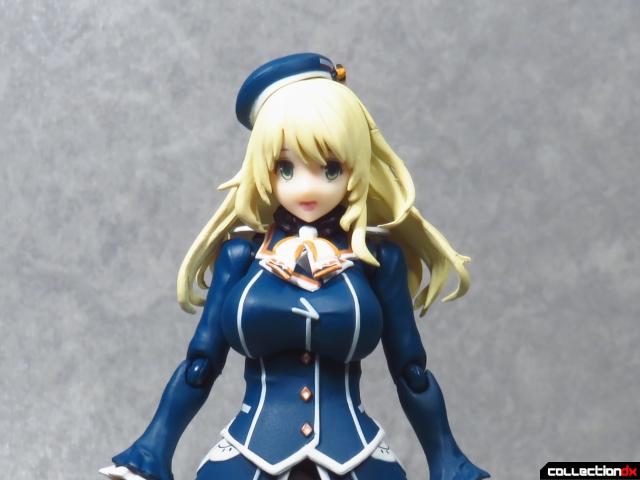 Her second face is subtly different from the first with Atago's eyes looking off to the side. This is meant to replicate the in game art. To be honest, I wish they had forgone one of these almost identical smiling faces for one with her mouth closed. I get the idea but it's all just too minute at this scale. 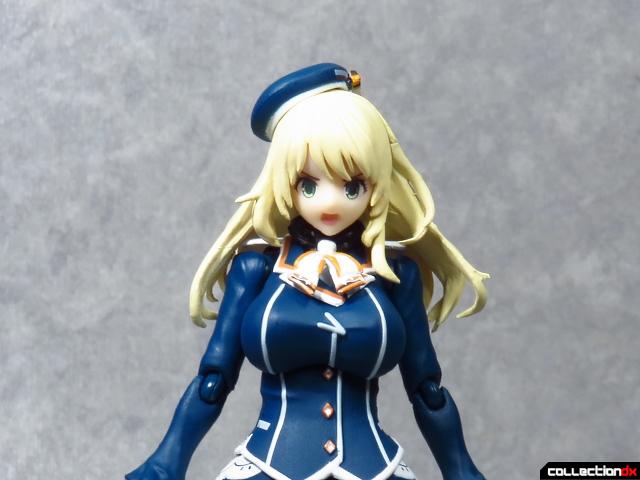 The third face has Atago shouting in anger, which almost seems a bit out of character. Though I suppose even the most jovial of boats get mad in the heat of battle. 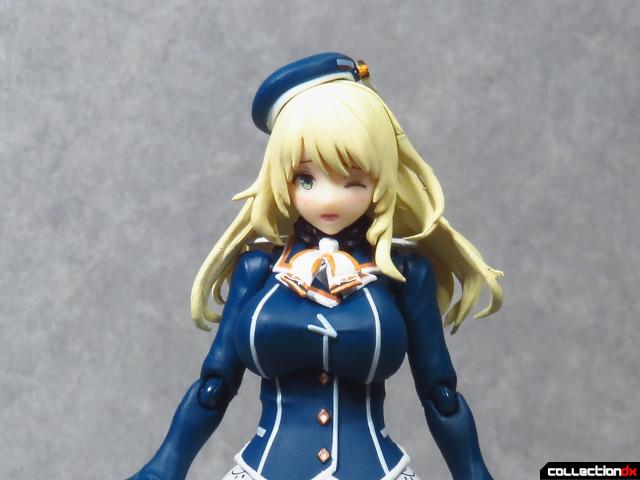 And finally we have the obligatory "feelin' bad" expression. Atago looks like some brat tried shooting her in the face with a Super Soaker. Even boat people need to keep their eyes clear of water.

While swapping faces is quite easy, Atago's hands can be irritating to handle. Each wrist has a small universal joint that ends in a ball connector so trying to pop on a new piece involves a moving part going on another moving part. It also doesn't help that her frilly cuffs can get in the way when trying to exchange parts. I suggest that if you are going to be changing her hands around a lot, maybe try using warm water to soften up the sockets on each hand as you pop each one on her wrist. This should widen the connection just enough without damaging the plastic to make swapping parts a lot easier. 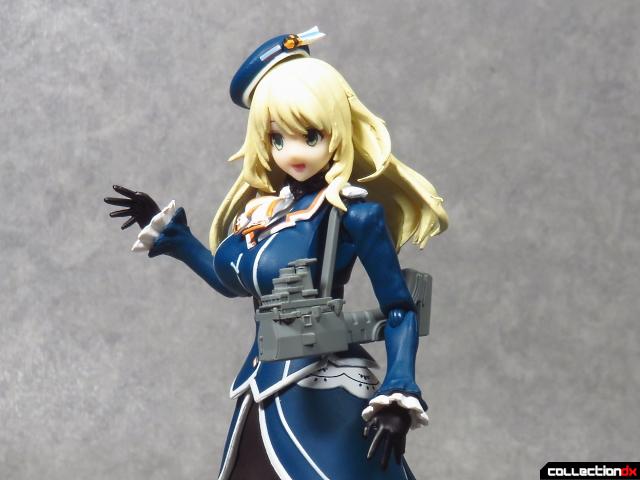 Both Atago and her sister ship Takao carry around a purse styled after the real ship's bridge section. She can hold it in a few different ways such as tucking the solid plastic strap under her shoulder flaps after extending her arm joints outward. This fashionable accessory provides both a working CIC and a place to store her makeup. While it does not feel especially fragile, I would be careful around the tiny antenna on top. 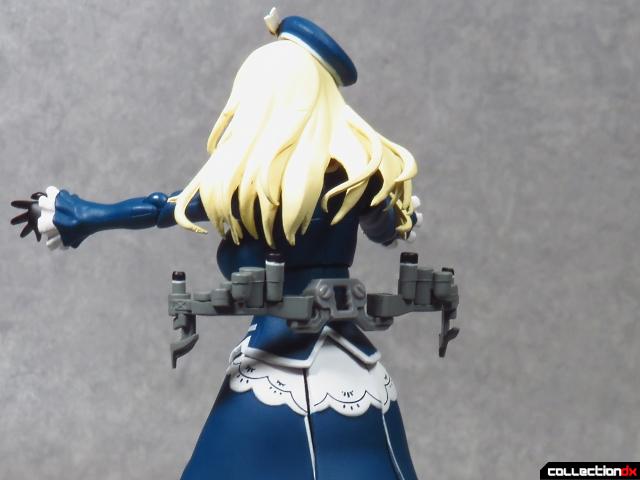 To get Atago all geared up for battle, you first start by plugging this mounting bracket into the the two holes on her back. It snaps firmly in place with a soft click and features movable sides that hinge inward around her waist. 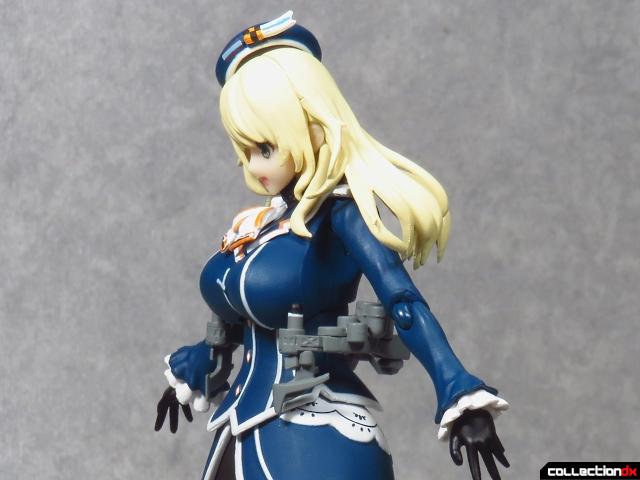 The bracket has some cool ship based details like tiny windows and what I believe are storage tanks. Like the purse, it has a few fine pointed bits that should be handled with care. 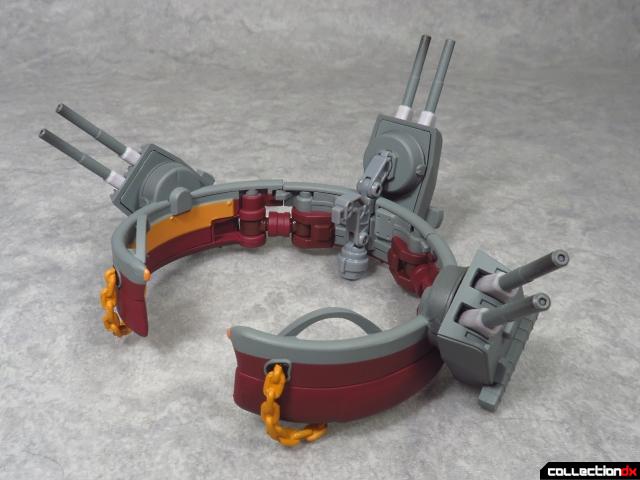 Atago's weaponry is concentrated into this mechanical boat based bustle. The turrets themselves come separate from the array out of the box and simple pop onto their mounts with a ball-joint connection. 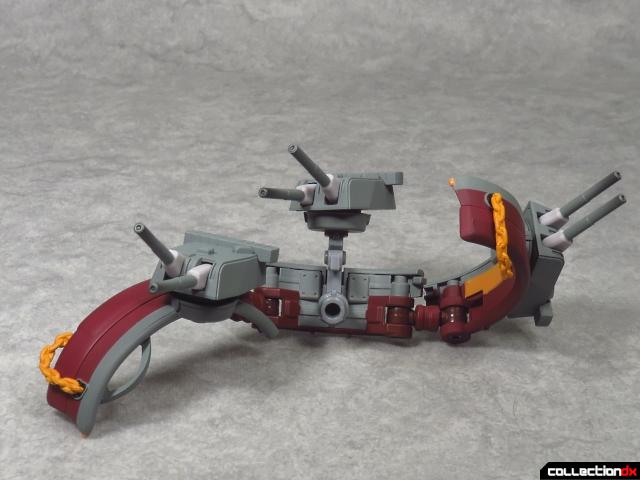 The weapons array is quite an elaborate piece in and of itself with multiple swivels and hinges that allow the sides to be re-positioned in a variety of ways. Each turret can rotate a full 360 degrees and features independently movable guns. The middle turret can also tilt forward and back on a small armature. That small port in the middle is where the stand attaches, and it is also hinged to move up and down. 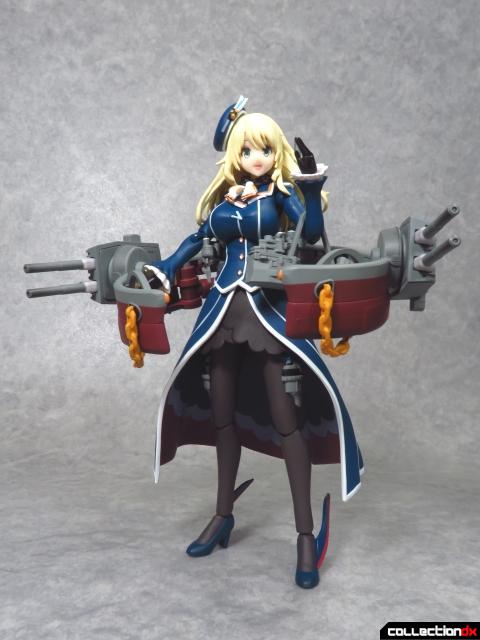 Unlike Yamato, Atago's compact battle gear affords her the ability to stand without additional support. While she is more top heavy like this, I found that it's fairly easy to find a pose where Atago will remain upright, even in those heels. 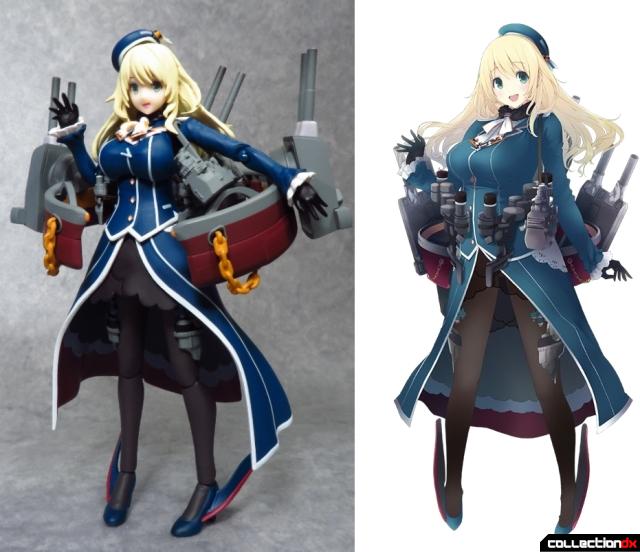 The AGP figure also does a fairly good job at emulating Atago's in game artwork. Although it should be said that the original design didn't really account for just how everything in her costume fits together so the toy version had to take a few creatively liberties. Atago's purse in particular seems to get in the way a lot more on the AGP figure but that is partially due to have it has a rigid strap so it has to hang of her arm more awkwardly than if it was like a real handbag.

Also, there has been some discussion about how Atago appears notably slimmer in both KanColle merchandise and adaptations like the anime. I will say that I am firmly against displacement-shaming boats. 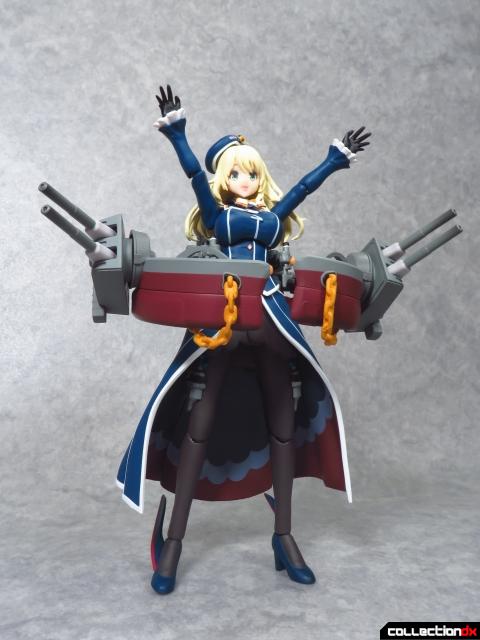 Atago makes for quite a fun and playable figure when fully armed as her weapons array adds an extra bit of personality (and firepower) to any gesture. 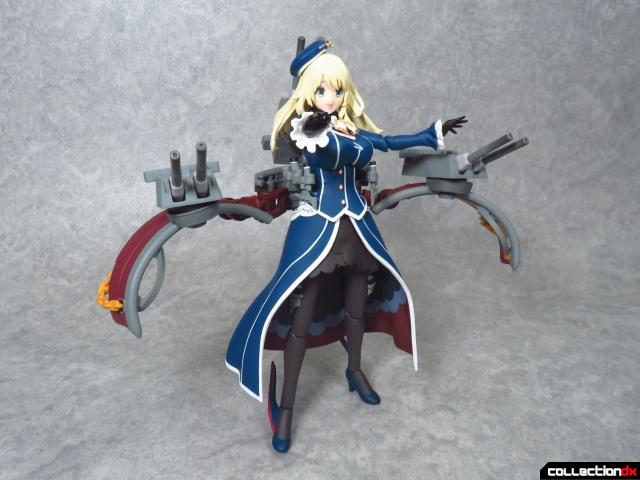 It is really cool what you can do with her ship parts. 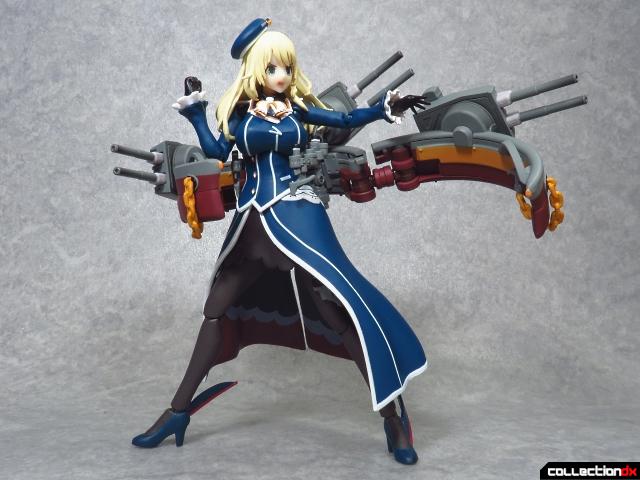 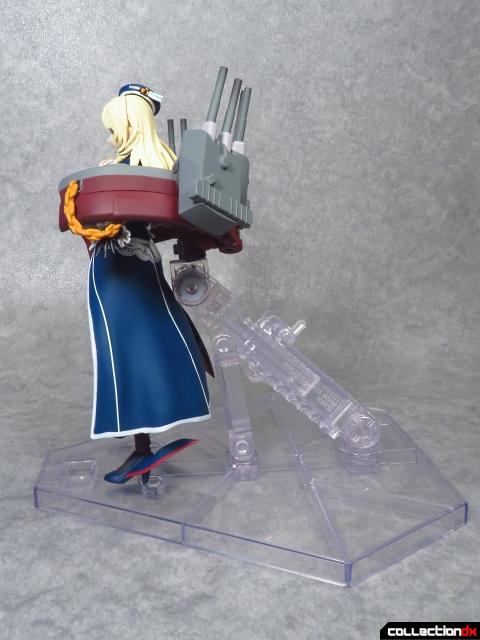 While Atago doesn't really need it, Bandai did include the proprietary Armor Girl Project stand for display purposes. I've mentioned before that this thing is rather unwieldy, and this is especially evident when you have a standard sized figure like Atago plugged into this massive armature. Unfortunately, the attachment point on her weapons array is sized for just this type of stand, with the hole being too big to work properly with regular Tamashii Stages. 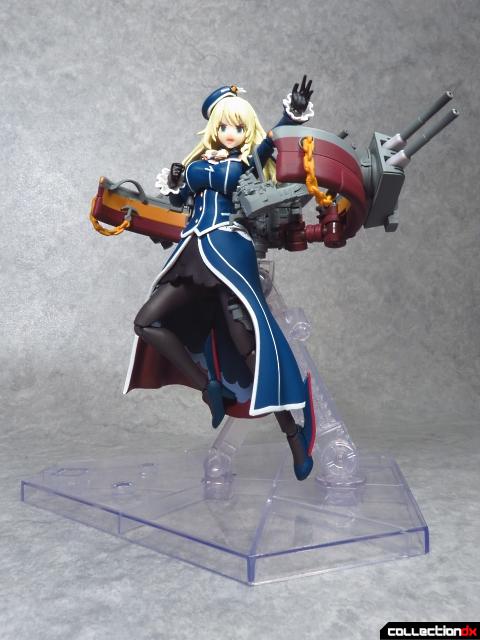 Still this big ol' base can help Atago leap around in the way naval ships do all the time. It features an extending boom arm that can be locked at several different heights as well as an extra support strut. 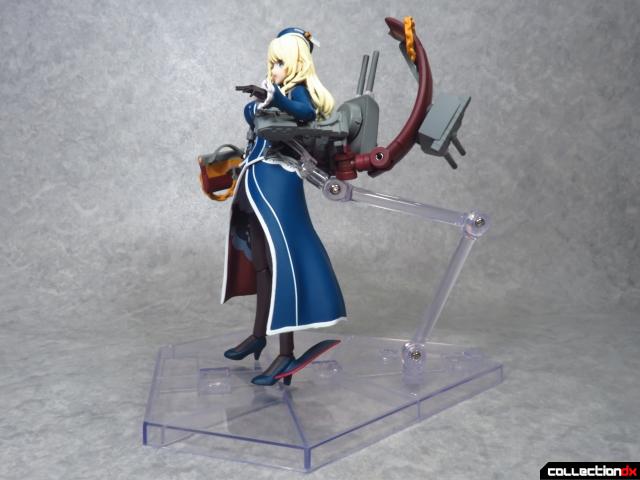 Bandai also included a regular Tamashii Stage Act 4 arm with standard figure clamps. With all the stuff bunched around Atago's waist, these don't really work too well. Also, you can't just use the arm directly as its peg is too small to plug firmly into the backpack. Thickening the peg would fix this problem, so I am not sure why Bandai insists on making people use the AGP stand instead of a superior product that they also make. 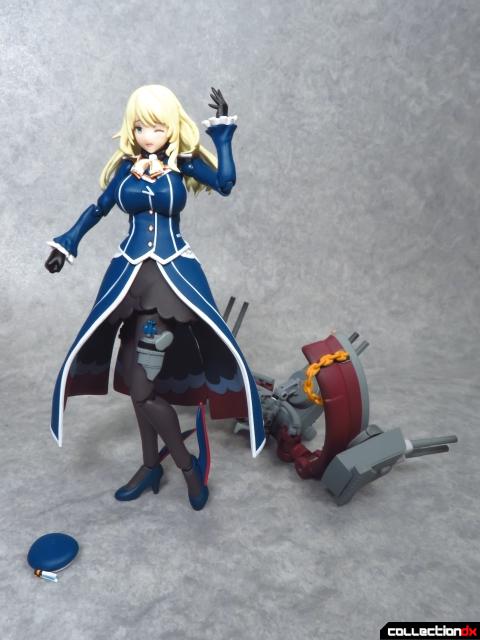 "Ahh~ they really overdid it out there..."

Even a heavy cruiser sometimes gets overwhelmed in a battle. 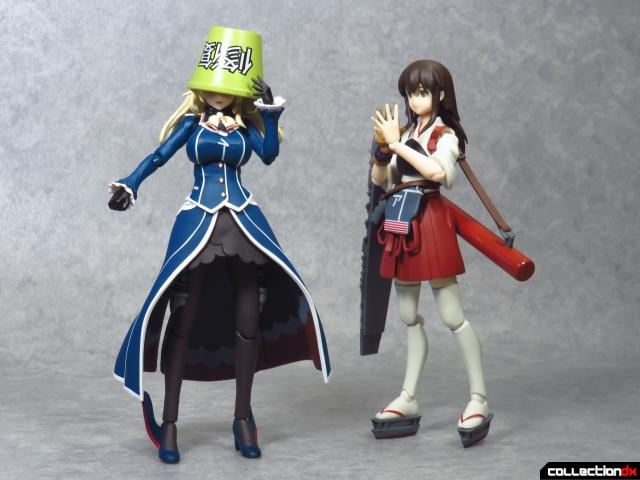 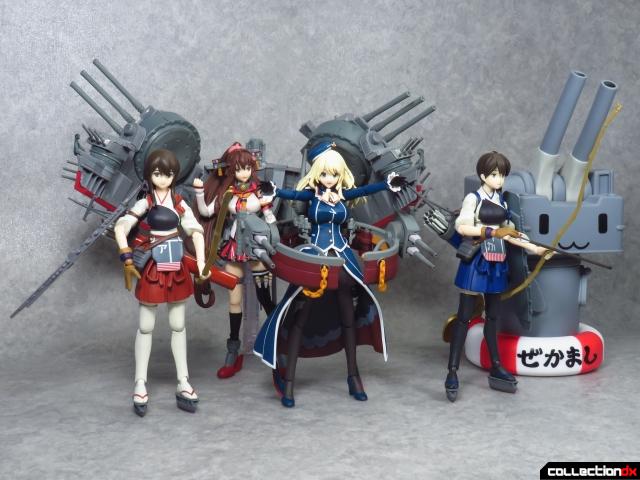 This small fleet keep keeps growing and I have to say it's all been pretty fun so far.

Overall, the Armor Girl Project Atago is a marked improvement over Bandai's previous attempt at a Kantai Collection figure. While some of it is due to her having a much more compact design than Yamato, even the base Atago toy feels a lot better made and is feels like it is approaching figma quality. Still, there are some annoyances like how difficult it can be to swap hands around, but I genuinely feel like Bandai is putting real effort into improving their AGP toys. If this is how the line will be going forward, then I feel a lot more confident in their ability to make quality KanColle action figures. Atago is definitely a step in the right direction and I think fans will be happy to own this toy.

3 comments posted
That's good to know that the

That's good to know that the quality's improving on these, because I'm really considering the upcoming AGP Naka.

I'm also thrilled to see Bandai zeroing in on quality. It seems they can be very hit-or-miss with female figures, but maybe they are finding the range now.

I agree that Atago could use a bit more girth below the waterline, but she still looks great. Her costume is an odd one, but they did it justice. How natural does she look in person alongside the Figmas? I feel like Bandai faces are prone to being very pale and without the subtle shading that Figmas have, but in your photos she looks very natural.

Also, not to give any spoilers, but I started watching "The Boats," and I'll just say that there was a historically accurate event in episode 3 that could really make the show amazingly dark if carried to its logical conclusion. I don't think it'll go that way, but I have enough hope to keep watching...

Atago's face looks pretty close to any of the figmas but her hair isn't quite as refined. She does look a lot nicer than Yamato overall though.