As a shounen series, Kinnikuman is no stranger to badguy power-creep, with challengers to the titular character becoming stronger as the show progressed. Akuma Shogun (悪魔将軍, or "Demonic General") is seven kinds of nasty rolled into one. Quite literally, in fact, as his physical body only manifests when the Akuma Knights under his command unite with his disembodied spirit. To match the character's humongous presence, Bandai released an S.H. Figuarts fit for a devil. 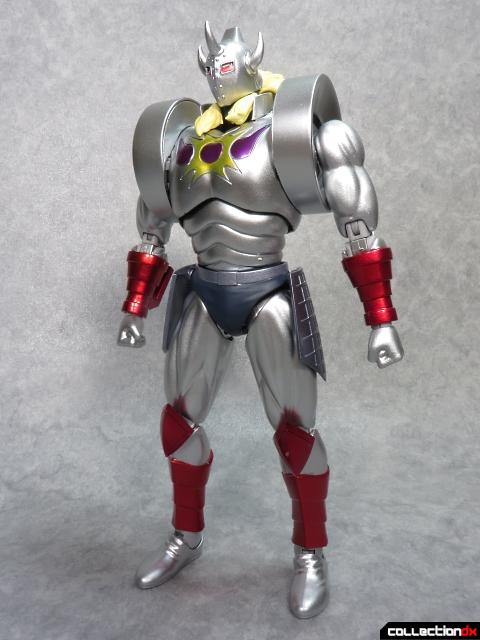 The S.H. Figuarts Akuma Shogun stands a commanding seven inches tall, and sports a shiny metallic paint job. Admittedly, the finish is an aspect of the figure I am on the fence about. Sometimes it looks good, and other times it makes the toy seem kind of tacky. 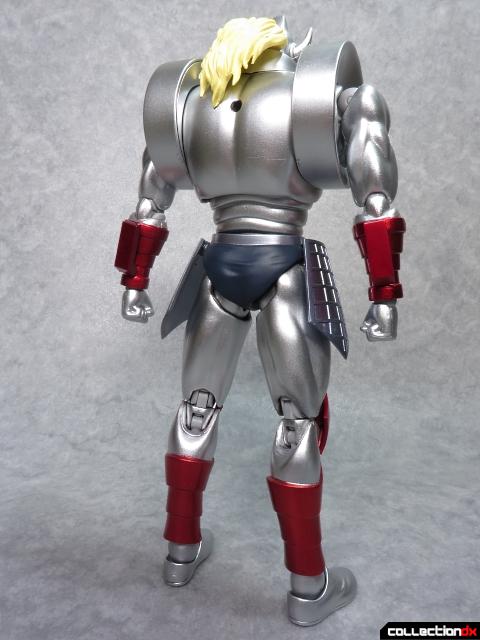 Even so, the figure is pretty spot on to the character, who is pretty much a giant silver muscleman with red highlights. 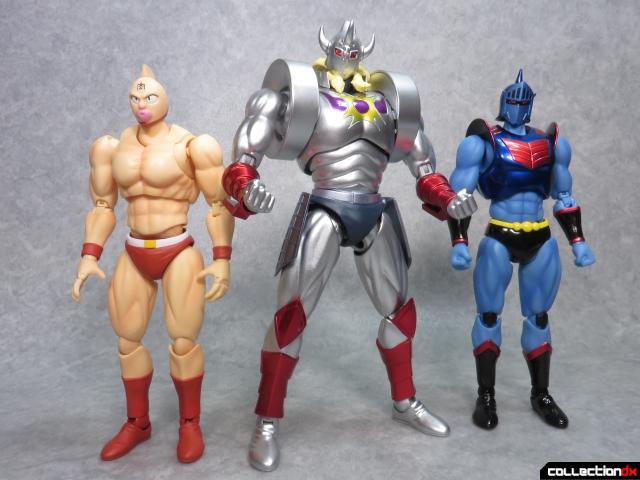 Thanks to his size, Akuma Shogun stands out in a crowd of other Kinnikuman Figuarts. 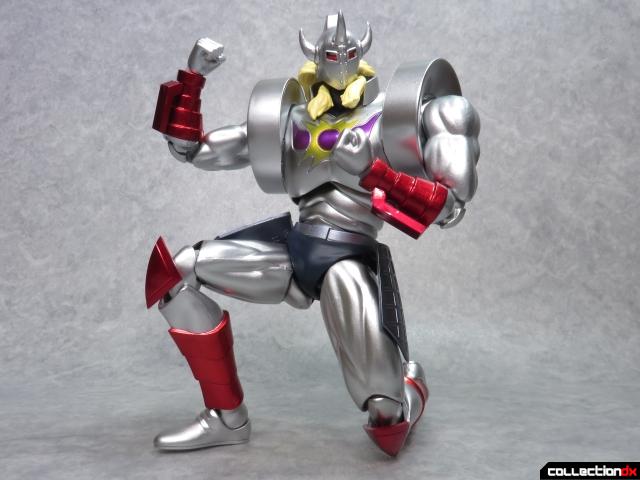 His increased mass has no effect on Akuma Shogun's articulation, as he has the same level of articulation as the normal sized figures. Even his huge barbell-looking shoulder pads swing outward so as not to hamper shoulder movement. 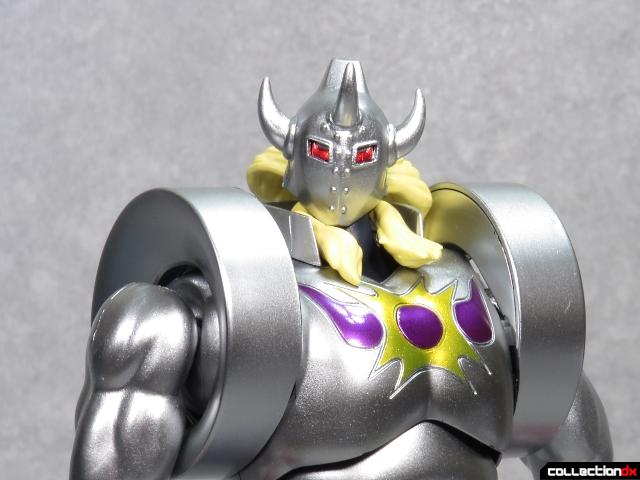 Like his fellow superhuman athletes, Akuma Shogun features swappable heads with different expressions. His default face depicts his shiny cranium with an intense gaze coming from his inhuman red eyes. Note that the main tuft of his flowing blond hair, at the back of the wrestler's head, has its own dedicated joint for moving about. 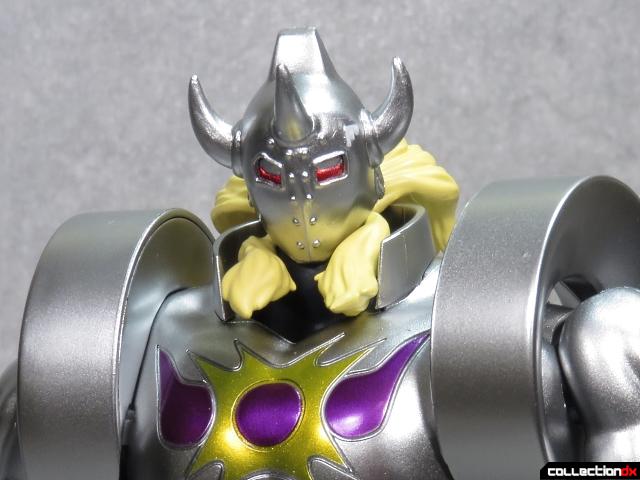 His other head has one eye cocked, with a small swath of sweat on his forehead. As I've said before, Kinnikuman is a series where anyone can perspire, even if their head is a demon viking helmet. Honestly, though, on this figure the effect is far too subtle, and requires you to swap out Akuma Shogun's rear hair piece between heads, which makes it not really worth it. 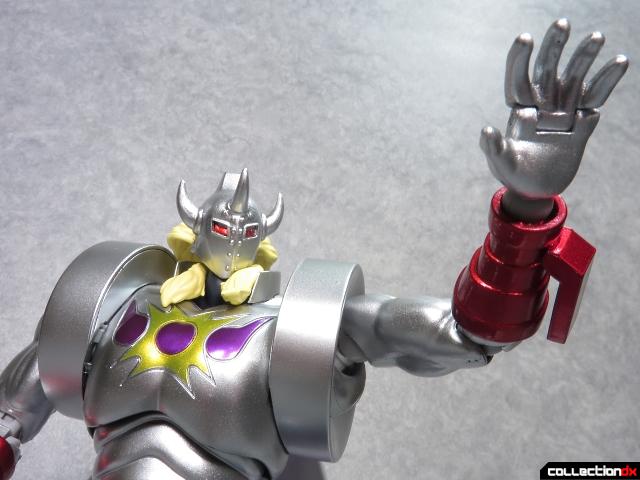 In addition to a pair of fists, the figure comes with two pairs of hinged grabbing hands. Like with Robin Mask, the difference between the pairs is simply how the thumb is positioned. You'll have to experiment with each hand type to find out which works best in different holds and grapples. 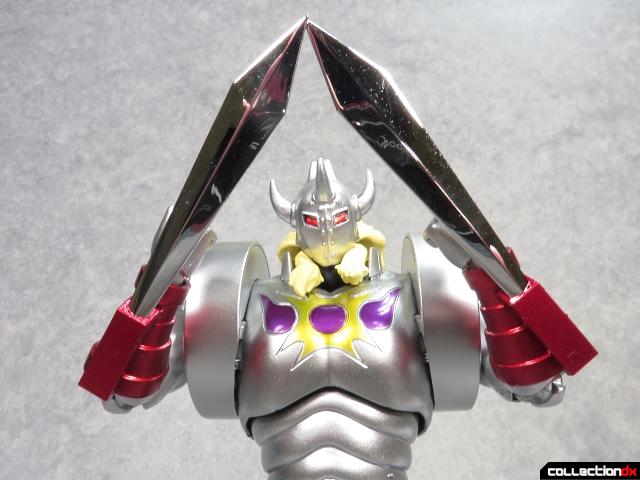 Akuma Shogun's red forearm blocks can be swapped out with ones brandishing shiny swords. 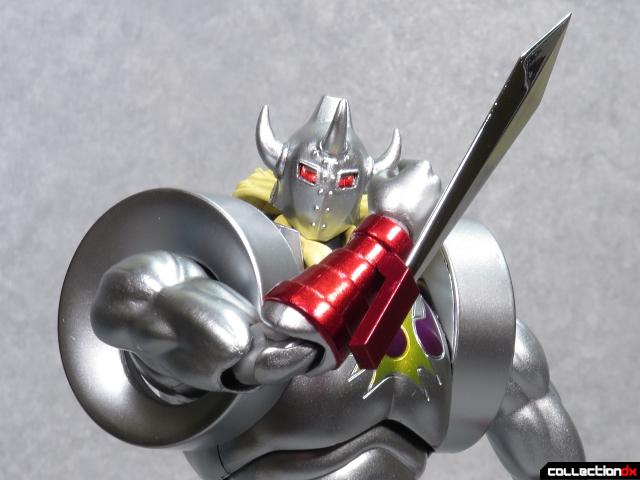 Both sets of forearm parts attach with a small mushroom peg connector. While the peg itself is rather small, the plastic feels soft enough to assuage fears of them breaking during a swap. 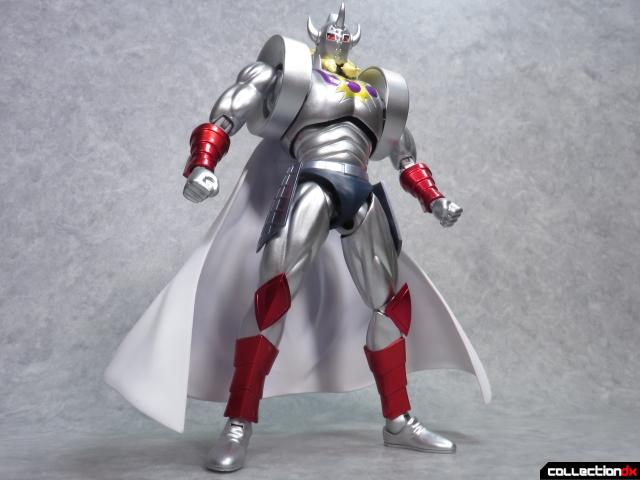 And like any proper evil overlord (or Japanese wrestler), Akuma Shogun comes with a very regal looking cape to dramatically toss aside before a match. On the S.H. Figuarts, the cape is a single piece of stiff PVC plastic, that is painted to resemble real cloth. As such, the cape is fairly weighty on its own, and can make Akuma Shogun topple backwards if you don't plant his feet. This accessory pegs into a hole on the figure's back, one which is just slightly too wide to accept a Tamashii Stage... 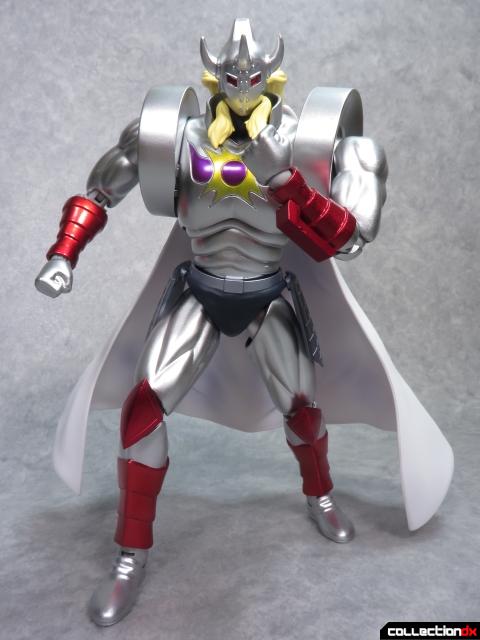 Despite its weight, Akuma Shogun can still achieve some menacing poses with the cape attached. 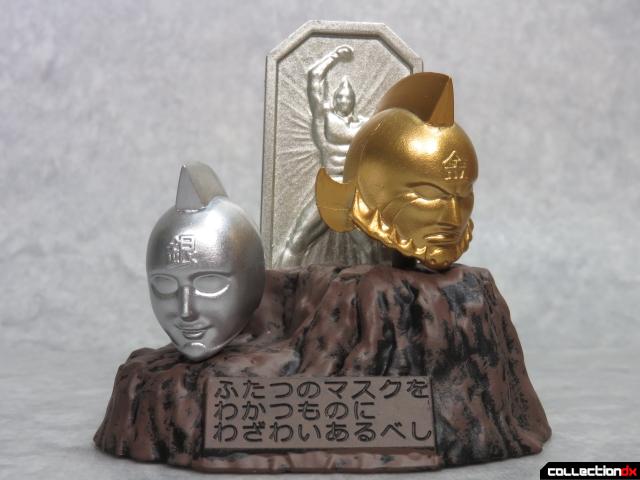 Akuma Shogun's last few accessories center around the Golden Mask Arc (黄金のマスク編) from the series. These masks represent peace for planet Kinniku, with the theft of the gold one kicking off the fight against Akuma Shogun and his underlings. The masks represent the rulers of the Celestial Realm, Silverman and Goldman, two brothers who quarreled until they decapitated each other in a fight. 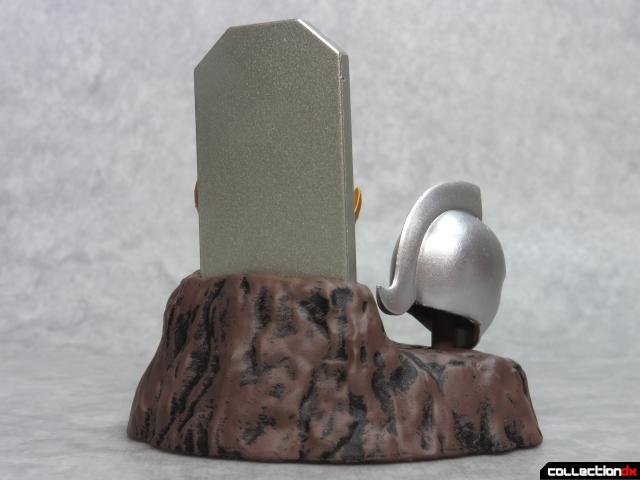 The two masks are essentially extra heads that can be attached to any Kinnikuman Figuarts, but are intended to be used with the titular hero and Akuma Shogun. 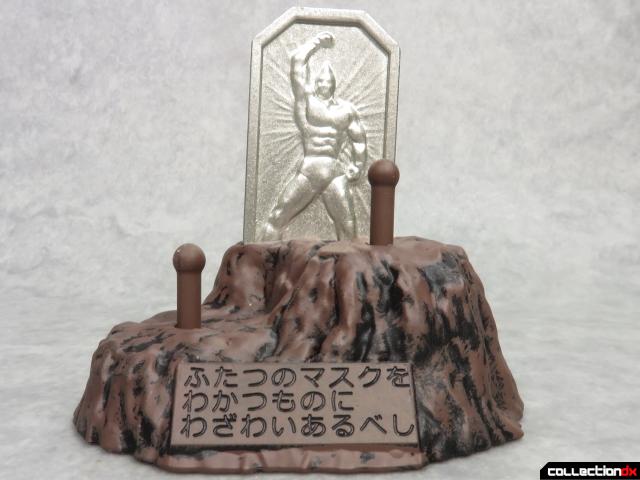 They plug neatly into false neck stalks mounted on the faux-rocky base. The inscription on the monument reads, ''He who Separates the Two Masks will Bring Calamity."

Thanks to fellow CDX writer, Spacerunaway, for the translation. 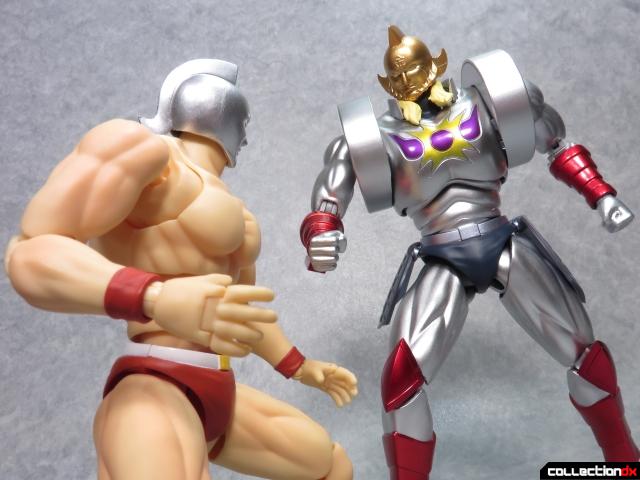 During their climatic final match, both Kinnikuman and Akuma Shogun would be seen wearing the sacred masks. 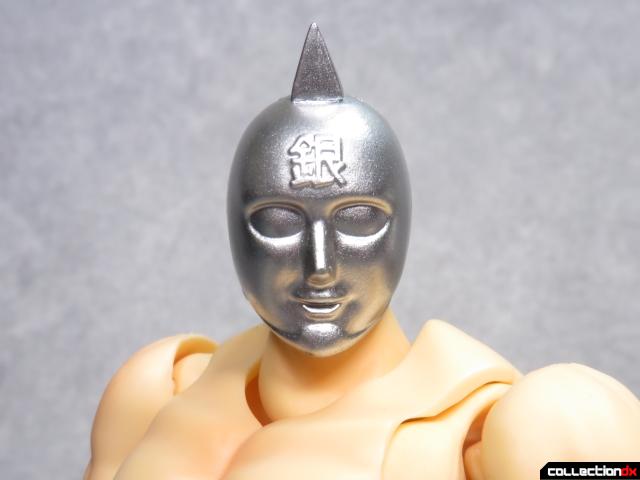 Kinnikuman dons the mask of Silverman, who is the younger brother of Goldman. The accessory is appropriately shiny, and has the kanji for "silver" (銀) molded on its forehead. 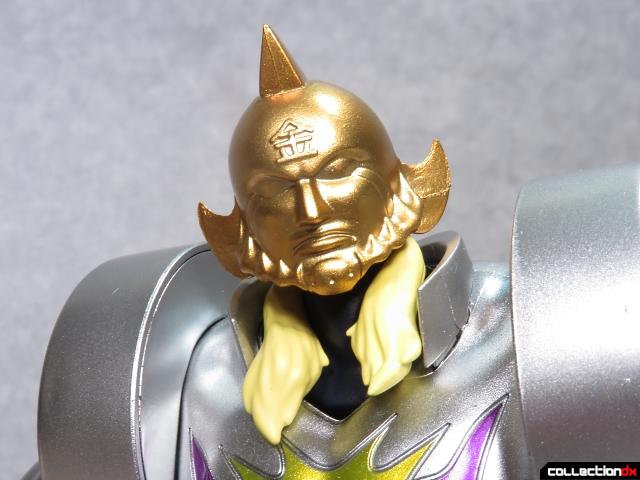 Akuma Shogun can wear Goldman's mask after you've swapped out his default silver collar piece for one molded to fit the sacred artifact. Like the other mask, this one has the kanji for "gold" (金) molded on its forehead.

And technically, Goldman's mask is Akuma Shogun's true face because he actually is Goldman, who sold his soul to Satan in exchange for power, but I don't want to bore you with too much Kinniku-mythology...

Now for the most important test for a Kinnikuman figure, can he wrassle?! 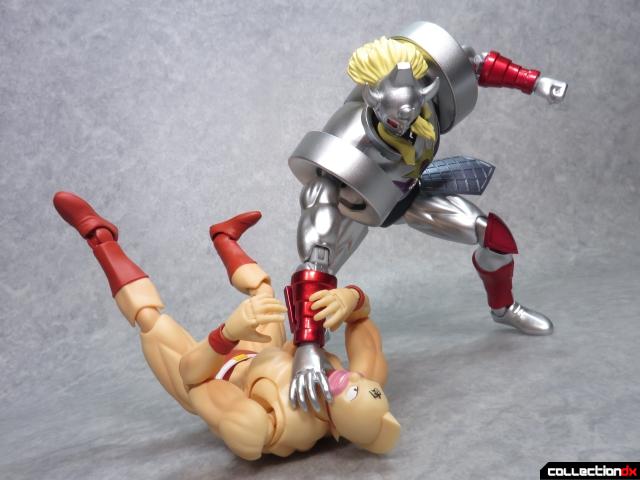 OOOOOH! AND THE BIG GUY OPENS UP WITH A CHOKE SLAM! 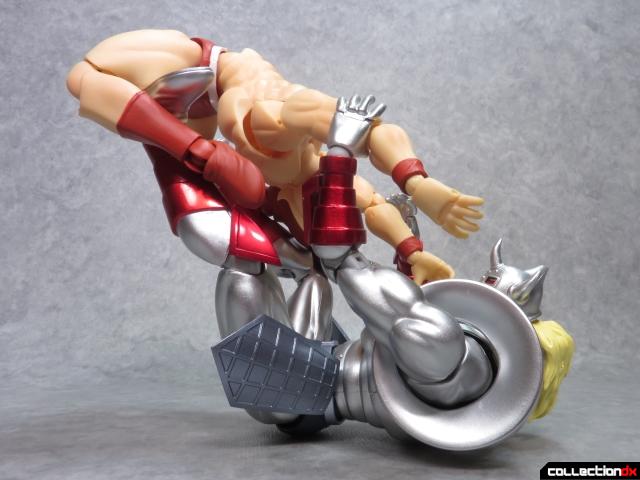 Now he's got Kinnikuman tied up in the ROMERO SPECIAL! 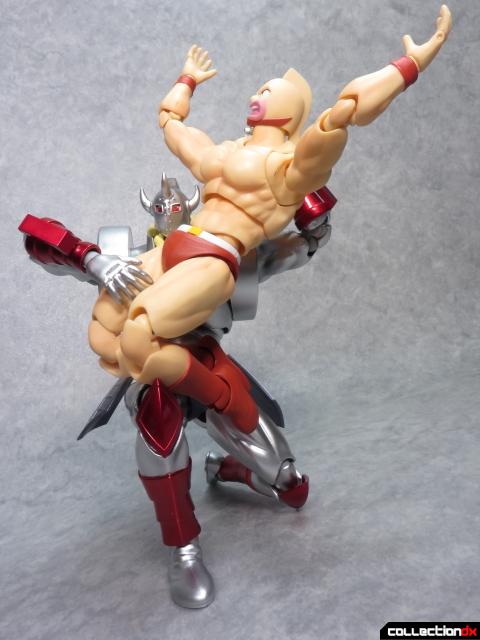 He follows up with the bone-shattering DOUBLE KNEE CRUSH! 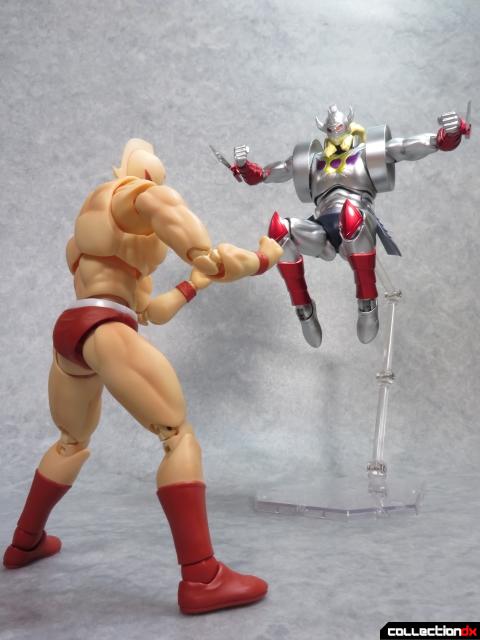 Akuma Shogun has leaped into the air with swords at the ready! Kinnikuman better watch out for HELL'S MERRY-GO-ROUND!

By the way, the way Akuma Shogun curls up and somersaults around during this move is just as goofy looking in real life as it is in the show. 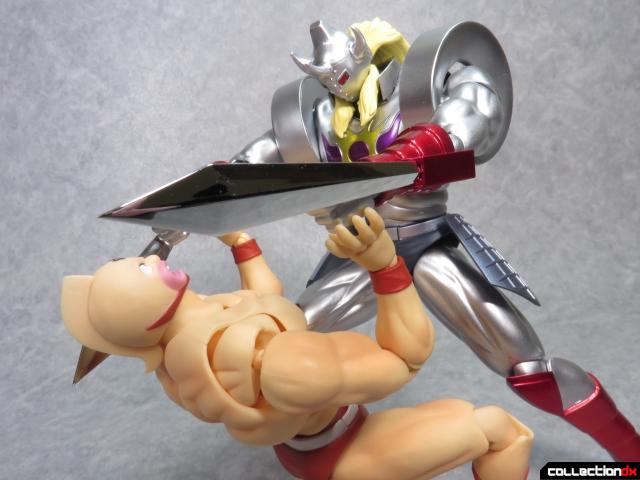 Oooooh! Kinnikuman is holding back the assault, but how much longer can he last?! 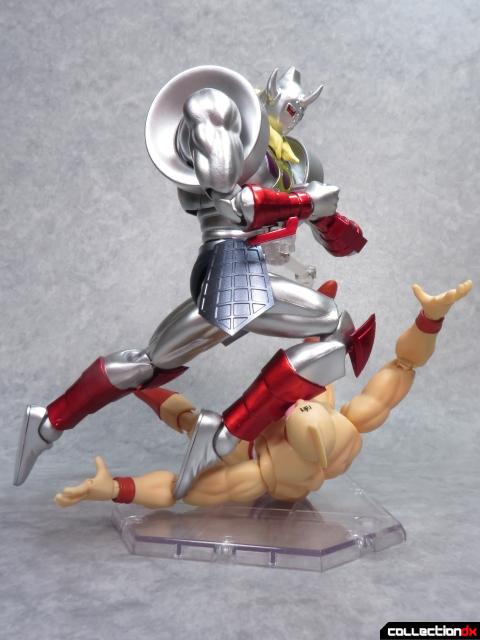 THAT'S IT! Akuma Shogun has finished off Kinnikuman with HELL'S GUILLOTINE! 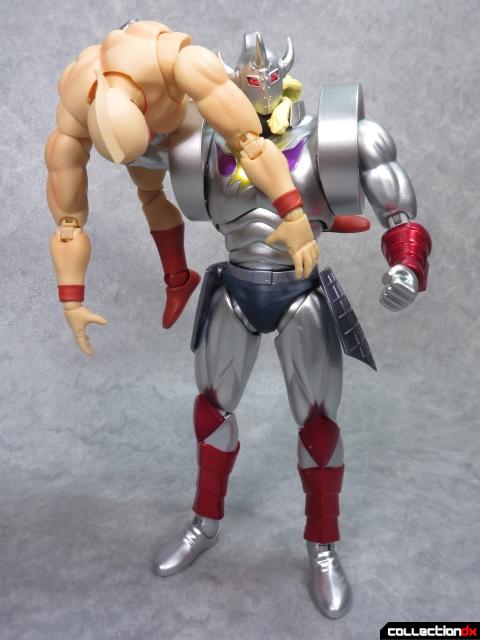 It looks like Kinnikuman is at Akuma Shogun's mercy! The King of Devils has beaten our hero! 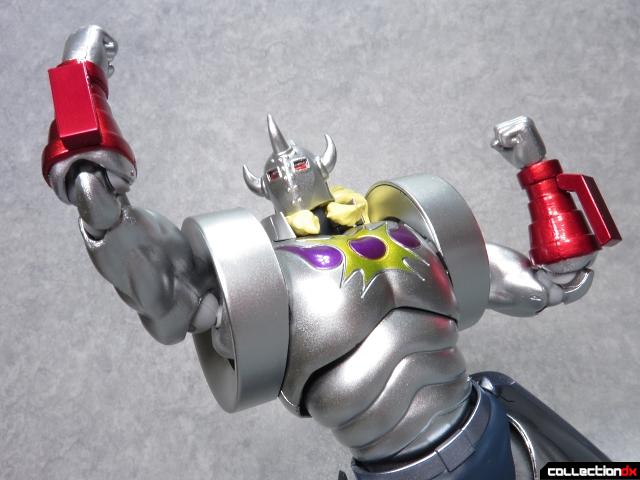 At least until the next episode comes around.

Like the Kinnikuman S.H. Figuarts that preceded him, Akuma Shogun is another straightforward and solid toy. I've had a chance to handle four out of the five (and counting) superhuman wrestlers released so far, and it seems like Bandai has found a winning formula for these figures. There really isn't much more to say about this toy - Akuma Shogun is a big evil muscleman, and the S.H. Figuarts definitely does him justice.

At the time of this review, Bandai has revealed more of the Akuma Knights are getting the S.H. Figuarts treatment, so there is little sign of this line slowing down!

Glad Akuma Shogun's holding to the same quality as the other Kinnikuman figuarts. I've been feeling the lack of Terryman myself, but apparently Brocken Jr. is coming soon, which is good too.

Yeah, they showed Brocken Jr. in the pics for The Ninja and a few magazines. Also, they teased a silhouette of Ashuraman.

Now all they gotta do is make Sneagator.

AWESOME. I don't have any of these yet, but this guy was one of my favorite MUSCLE creatures, so it's pretty amazing to see him in color with all that articulation. Would have blew my little mind, back in the day. I'll have to pick this one up!