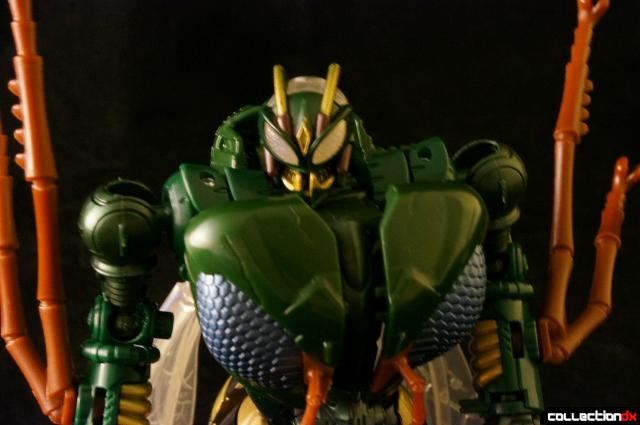 In a time when Hasbro was attempting to reinvent the Transformers brand, several new concept ideas were presented but Hasbro struck gold with their Transformers Beast wars series. The show that introduced well robots in guerrilla suit disguises as a war raged on between the descendants of the Autobots and the Decepticons (Maximals and Predacons).

As with every new Transformers show, there must be a variation of characters, the good, the bad, the anti-hero, the scientist, the leader, and then there’s the comic relief. As far as lovable bad guys go Waspinator takes the cake, he was never the brightest or bravest but he always blindly and loyally followed Megatron and was most notably known for being one of the two flyers in the show’s first season, always talking about himself and others in the third person, as well as getting blown up in every other episode (how Megs kept him around for the entire duration of the show is beyond me).

I’ll be completely honest, up until a few years ago I wasn't big on collecting Transformers and wasn’t even aware that there were Beast Wars figures available. After having done some research and online browsing, I did find several toys in the line but they didn't really appeal to me. They seemed a bit out of scale with each other and the proportions and representation when compared to their on-screen counter parts seemed way off. Thankfully, Hasbro and Takara have both heard the fans’ demand for better figures, with the Transformers’ 30th anniversary it looks like that’s exactly what we got. After first glimpse of some of the initial images, it was clear that these were a must buy for any fan of the classic series.

Introducing Takara’s Transformers TF Generations TG-30 Wasupineta (AKA Waspinator in the US and will be referred to as such in the review). Now I normally don’t spring the extra cash for a Takara release, however, the paint on the Rhinox figure was spot on cartoon accurate and while I didn’t notice any real differences in the paint between The Hasbro and Takara versions of Waspinator, having it in hand made a world of difference for me.

At first glance its hard to not admire how accurate Waspinator is to his cartoon representation. Both robot and alt mode are done very nicely and with great attention to detail. 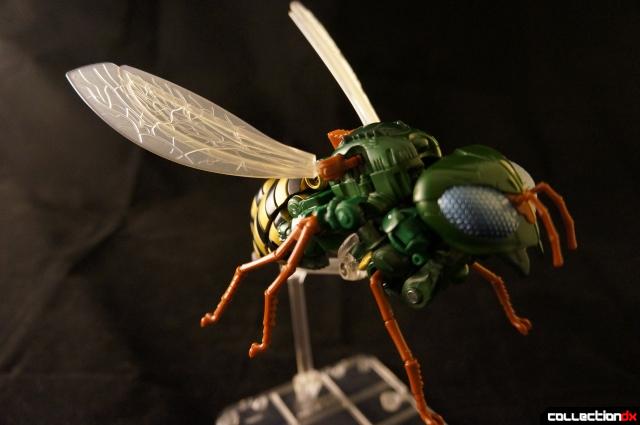 Lets start off with the alt mode. Waspinator as his name implies, can transform into a wasp and a big one at that when compared to the other transformers’ alt modes in the show. As I don’t own the Hasbro version, I can only use what images I’ve seen online for comparisons, the colors on the Takara version use much darker tones of green, the eyes are a light blue color, the wings are a translucent white, then the back part has a nice shine of gold and black. 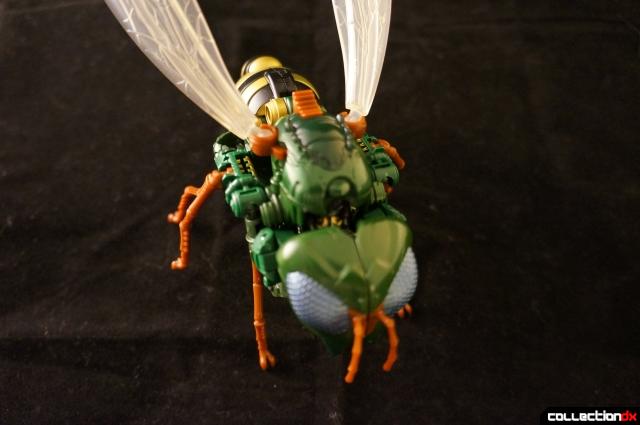 After looking at the Hasbro figure I believe Takara managed to use a nice mixture of green so certain robot parts would blend in more and avoid standing out in the alt mode. The wings have a few interesting features in this mode. For starters there’s a nice gimmick where they can flap back and forth by pulling a part on his back backwards and letting go. Also, the wings have some limited articulation as they are connected with ball joints and can be positioned in numerous directions. The front legs are on ball joints and can turn a full 360 degrees as well as limited in and out movements. The back legs however, can only swivel back and forth. 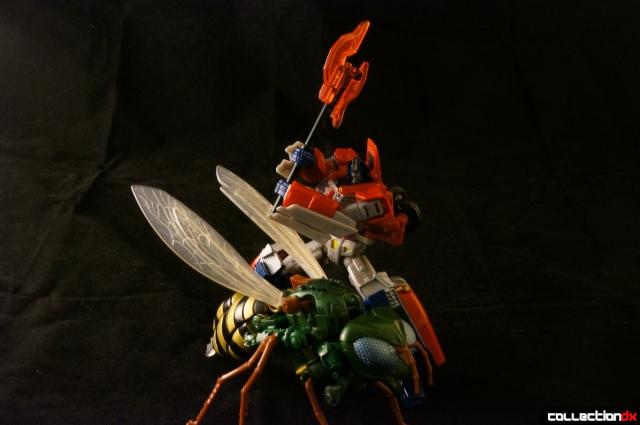 “I said no bugs in the pod during teleportation!!” 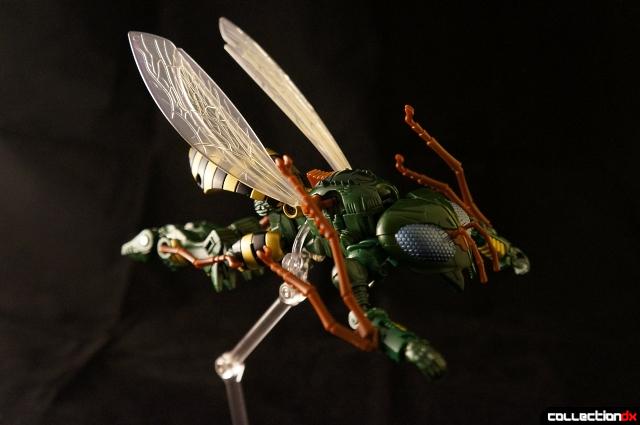 The Transformation is simple, fun and can be done in a few minor steps. As some Transformers fans tend to find fun and goofy alt mods, I’ve stumbled upon what I’ve come to call “Bug Man” 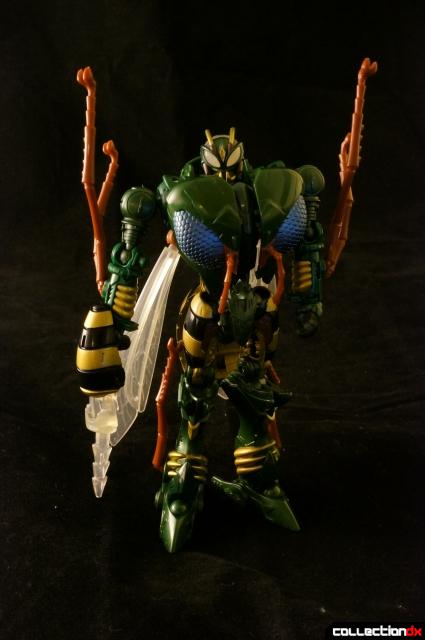 Next is the Robot mode. Again, I should mention how nicely detailed this mode is and how accurately the representation is. 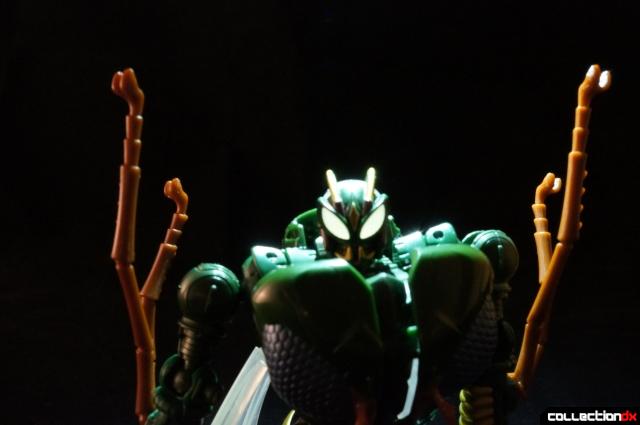 The light piping in the head is superb and can utilized for some nice photos and playability. 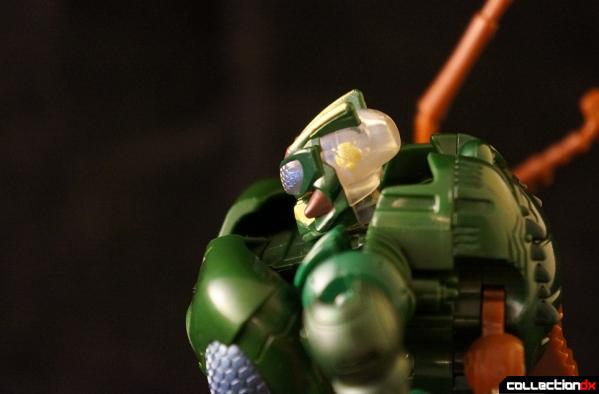 TakaraTomy also managed to fit in two tiny Predacon logos on the sides of his head, which was a very neat touch, and again, very cartoon accurate. 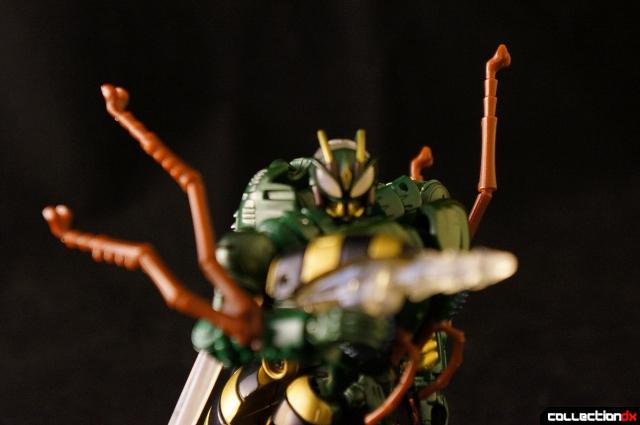 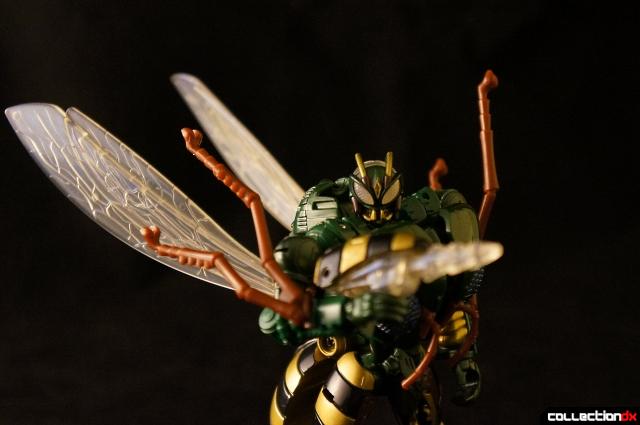 The bug legs do tend to stick out just a bit in this mode and I do wish there would’ve been a better way to hide them more, though that’s a minor complaint. The wings are fairly shown in the back though I often tend to prefer positioning them upwards (a la G1 insecticons). 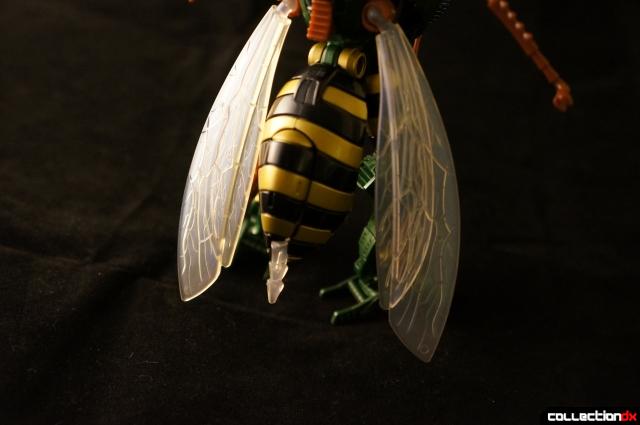 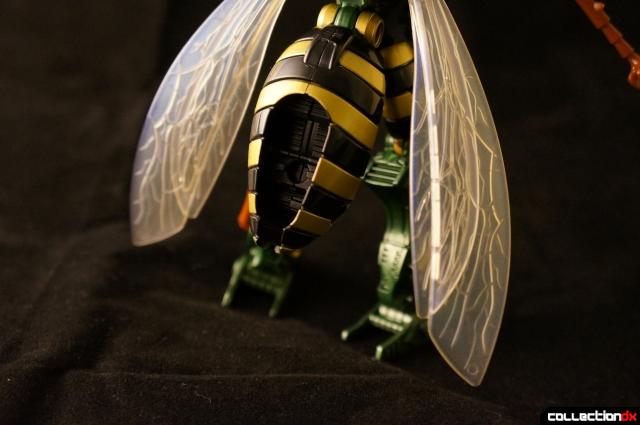 Waspinator’s gun can be folded and stored in his backside as his stinger in alt mode, though removing the gun does leave a small gap in the area where it was stored. 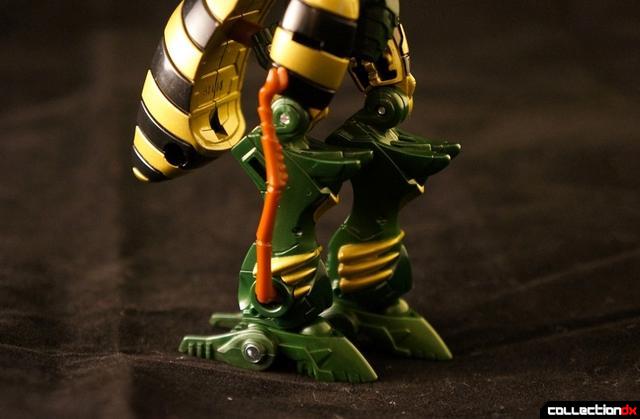 Articulation wise, Waspinator’s head is on a ball joint. The arms are also on ball joints and can move up and down, the elbows bend nicely and the wrists can swivel all the way around. Unfortunately, Waspinator has no waste joint whatsoever. The legs are on ball joints but then we get to where my real complaint is, the knees can bend forward nicely as part of the transformation but are very limited when bent backwards. The feet can bend back and forward as part of the transformation and give the figure a nice sense of stability due to the cartoon accurate ankles. 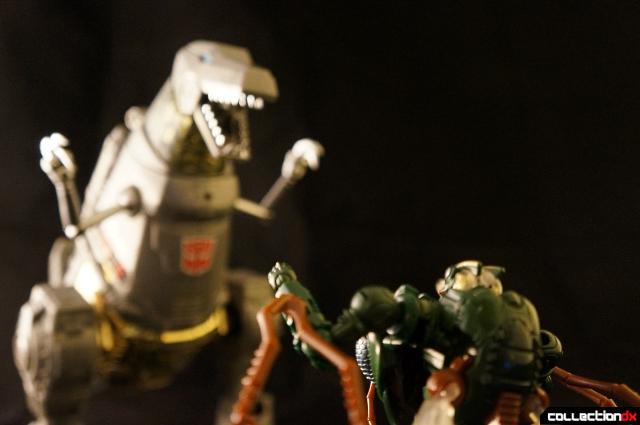 “No no wait, wrong Dinobot” 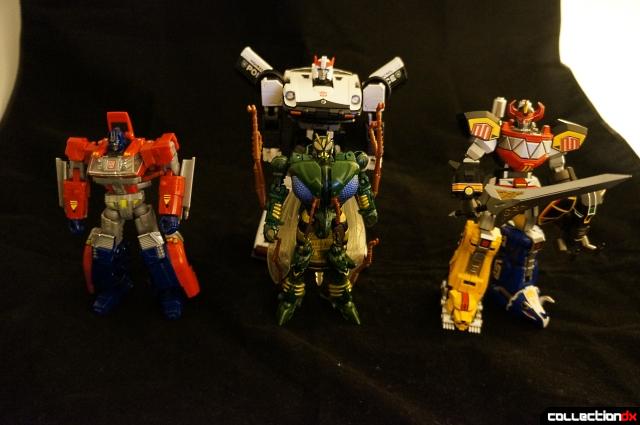 Here's a size comparison shot with some other toys.

Overall, whether you get the Hasbro or Takara version you’r bound to enjoy handling this figure and posing him with his current and upcoming releases in the Beast Wars line.

Waspinator is definitely one of my favorite TF characters. I have the Hasbro version on pre-order from BBTS but apparently there has been some manufacturing/supply SNAFU because while it was due to be released in Feb. or March they have said they won't be getting these in until September (something similar has happened with Generations Rattrap). I don't know that I would say Waspinator "blindly" followed Megatron. More like he begrudgingly followed him ;)

If I may, if you're interested in owning more BW figures, I'd suggest taking another look at those early BW toys for a few reasons;
1) for the most part the show producers used the actual toy to design the characters. They are not COMPLETELY accurate (for comparison, look at Waspinator's head in the show vs the toy), but for the most part the toys mirror the actual on-screen model fairly well.
2) regarding scale, I have most of the show cast and the toys are pretty close in scale for the most part, the short characters are short, the medium sized characters are in the middle, and the tall characters are tall. The ONE exception to this is probably the Ultra-sized Optimus Primal, but if you can find Robot Masters Beast Convoy it's a suitable stand-in (if you don't mind him having an Autobot rather than Maximal logo). However, the 10th Anniversary version of Ultra Optimus (a TRU-exclusive) is probably one of the best looking TFs ever, IMHO. Here's pics of the show cast to get an idea of their relative sizes:

Thanks for the info. Very insightful. I definitely want to add more BW characters to my collection. I was hoping Optimus Primal would win the fan poll so we'd get a masterpiece version but alas it looks like that wont be happening for a while.

Last words in Beast Wars indeed, until he made a shocking come back in Beast Machines:

No arguments there. I watched it simply to find out how the overall arc would end and then really wish I didn't bother, the story was all over the place and the new designs did not appeal to me.

That and, aside from the fact Mainframe was making the sequel series, the visual style was completely different, and the writers were clearly different from the ones who masterfully wrote BWTF for three seasons and had not bothered to watch the previous series. The music was repetitive and not varried, and the smaller cast of characters actually didn't help this time since the odds were always against the Maximals.

And, BTW, what the hell is a "techno-organic" life form!? Seriously! At no point before or after BMTF has there been a biological Cybertronian, and mixing the two was not only confusing for fans but newcomers as well, and was difficult to convey.
Oh, and if Primus wanted the Cybertronian race to be organic, then they would have been organic and not living machines!

Good to see more Beast Wars goodness. This was my favorite series, and hope to see more Beast era stuff to come. My only gripe with the toys were why were the leaders so big....but many future lines did the same thing.