In 2004, Toynami supposedly did something great when they released their Voltron masterpiece to coincide with the 20th anniversary. I forget the exact number, but like all their masterpiece toys, it was limited edition. It sold out quickly, and there was a lot of positive feedback, so in 2009, they did a re-issue for the 25th anniversary. We'll call them V1 and V2 respectively. What changed? Besides the packaging (book-style box to carrying case), the toy went from being die-cast to plastic. Once again limited edition, once again sold out, once again lots of people are happy. So, maybe it's not a surprise that Toynami re-issued this toy for the third and final time back in 2014 and went back to die-cast, V3. Why or should anyone even care? Let's find out as I look at what's new and possibly improved. 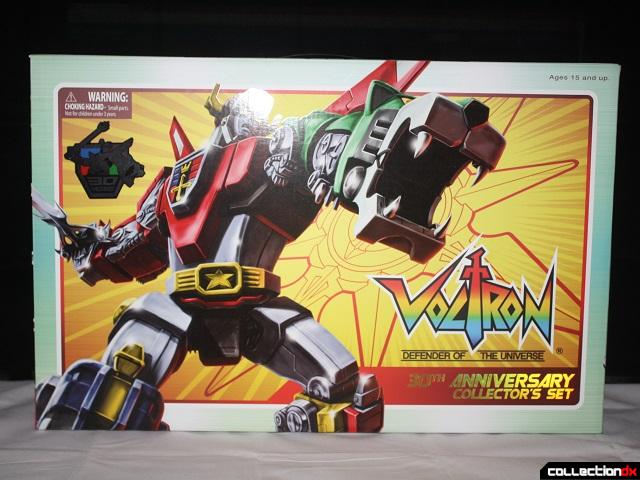 The art is all new, but like V2, the set is packaged in a box with a removable cover that's held in place by the plastic handle. So whether you think that's cool or convenient, this box is at least easy to care around. 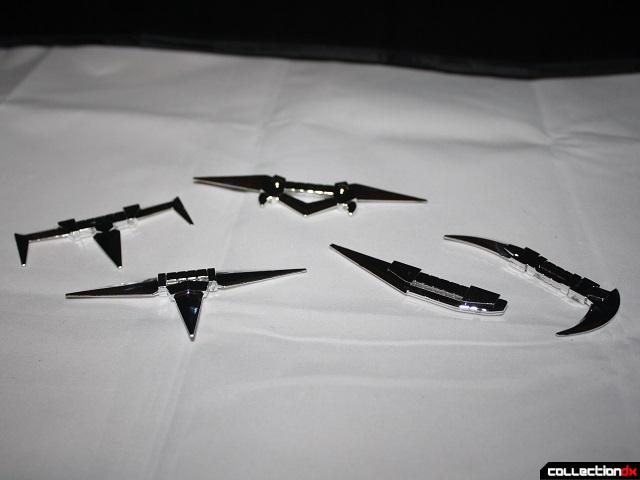 To me, one of the greatest things about Voltron (AKA Golion) is the weapons that are used by both the combined robot and the lions. Everyone remembers the Blazing Sword, but there's so much more in the arsenal. And one of the big ways Toynami always dropped the ball in my opinion, is with the lack of additional weapons. Previous to V3, all you got was the Blazing Sword and the "shield" that's actually a throwing weapon. That's a pretty big step back when the original classic toy came with multiple weapons for each lion, in addition to the sword and shield. But after 10 years, Toynami finally decided more accessories was a good idea, and included the lion swords. I actually expect more, but it's still better than nothing. 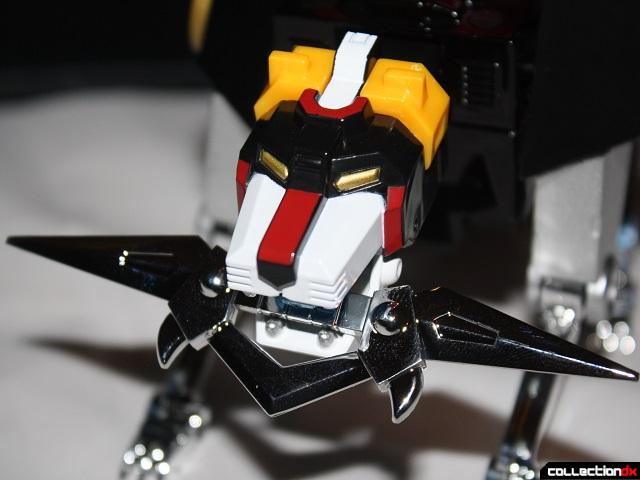 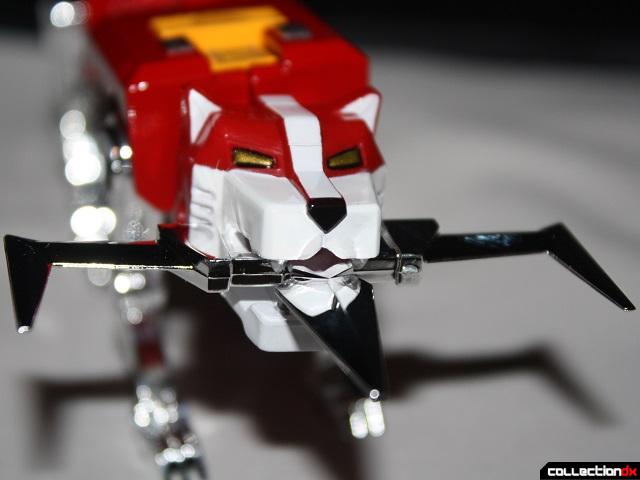 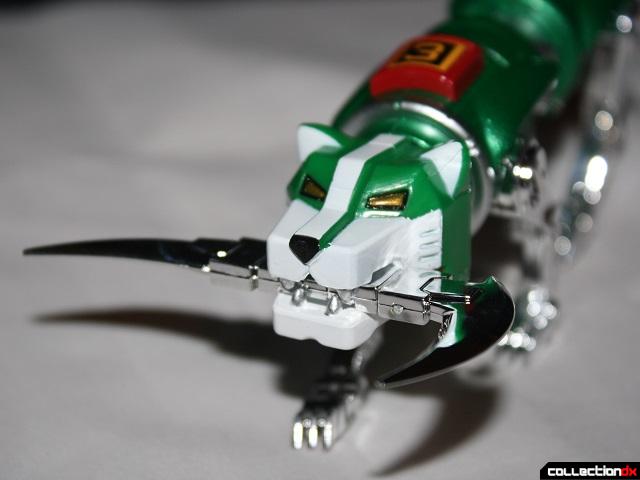 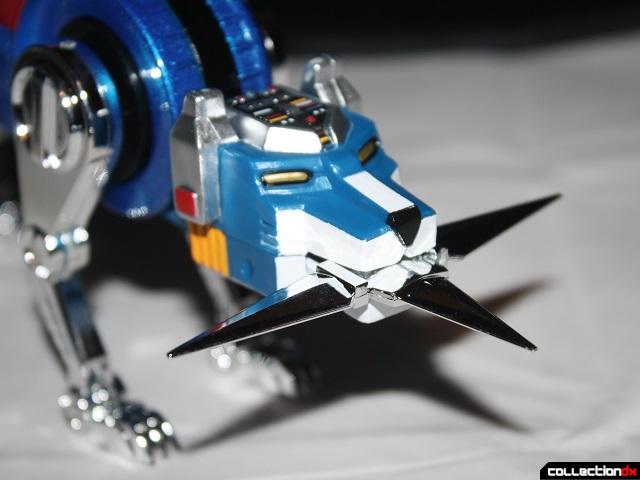 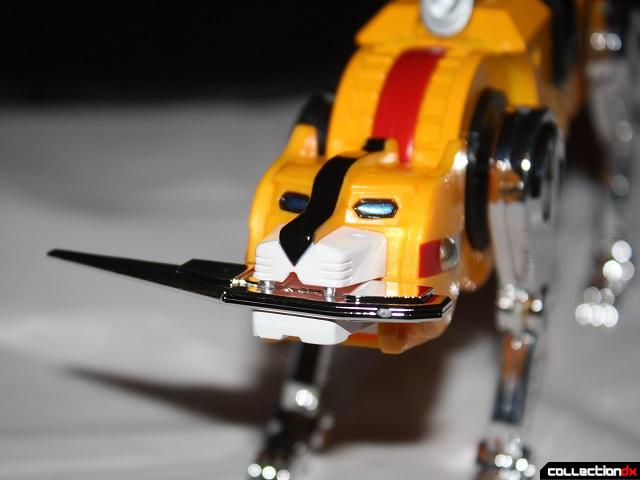 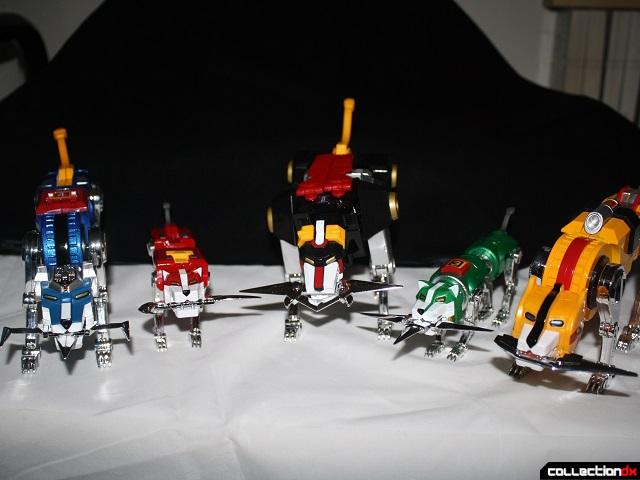 LACK OF ATTENTION TO DETAIL!

If you look at that group shot and compare it to the individual ones, you'll see I swapped some of the swords. And if you can tell which is correct, congratulations, because you're a little better at this than Toynami. Yes, the manual actually mixes up the swords for the red, green, and blue lions. To be fair, this goof isn't entirely on Toynami, because somebody at World Events should have noticed too. But then again, I don't think they even know their own property that well.

Now, the swords being chromed does go well with the lions and their metallic paint jobs and chromed legs. But I'd have preferred they have painted grips (assuming we couldn't get both details). Even Mattel managed to do that. I also suspect the lions' ability to wield their swords is more of an afterthought, because they don't hold them that well, especially black lion. I'd write that off because its mouth stores Voltron's face, but Mattel avoided that problem, so Toynami doesn't get a pass. 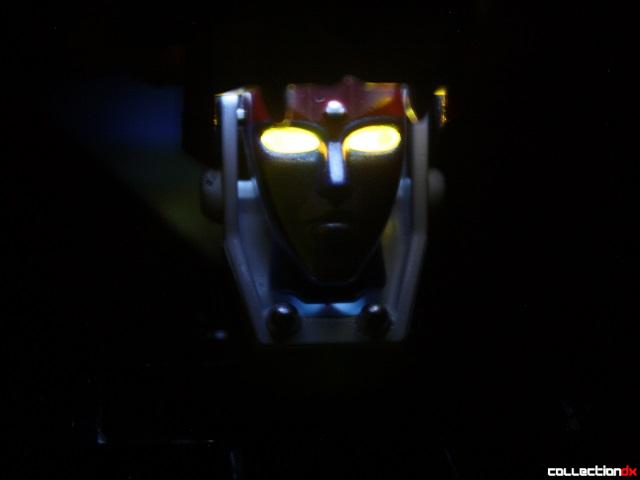 Voltron's eyes now light up. They're bright enough to be seen in light, but I opted for a dark shot to really show them off. This is actually pretty cool, though the mechanism at work is simple. The effect only happens when Voltron's face is exposed, but if you don't want the eyes on, you can do two things. Either remove the batteries, or insert the included plastic strip between the back of the black lion's jaws and head, blocking the contacts. 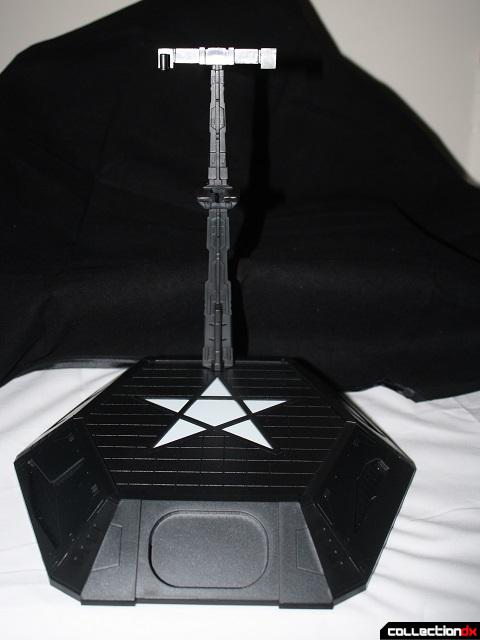 The biggest addition, and my favorite accessory, is the display stand. It comes with batteries installed and an easy-to-assemble tower that goes in the rear. 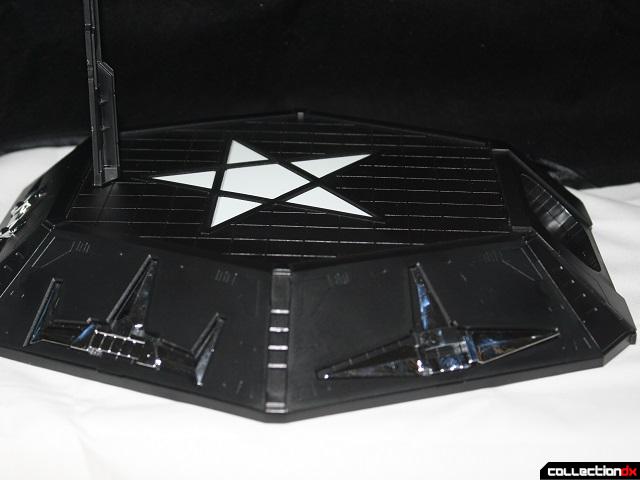 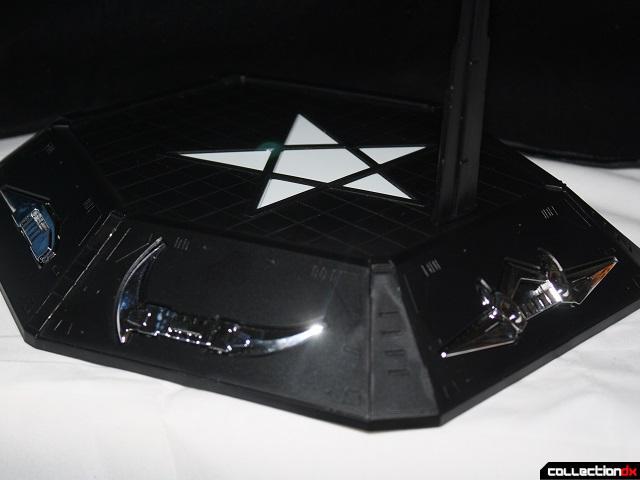 It has a place along the base for each of the five lion swords. They just sort of sit there and don't really plug in, but stay in place. 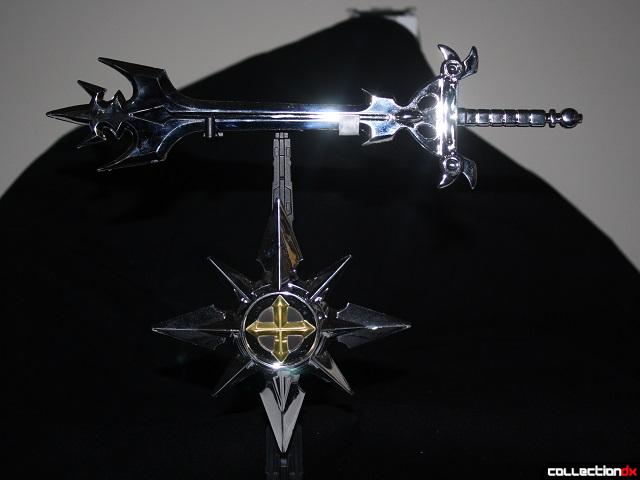 The tower does a fine job of holding both the Blazing Sword and the shield. 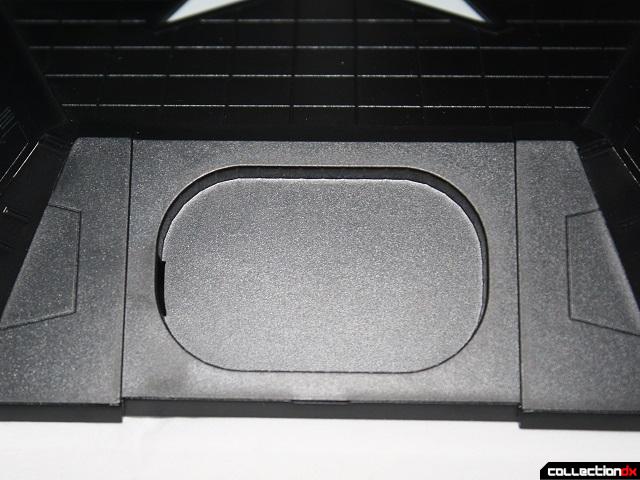 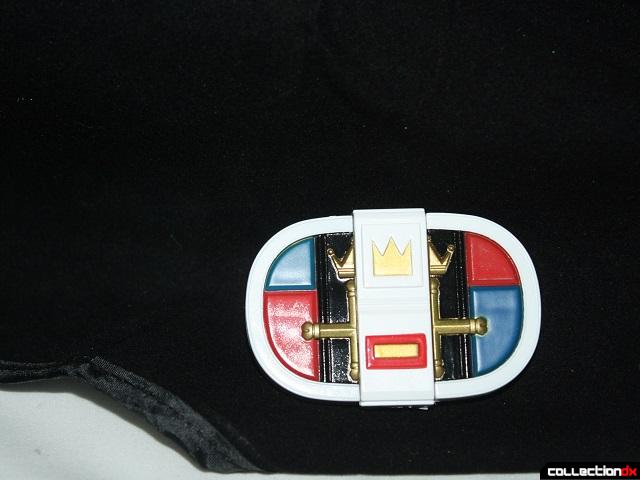 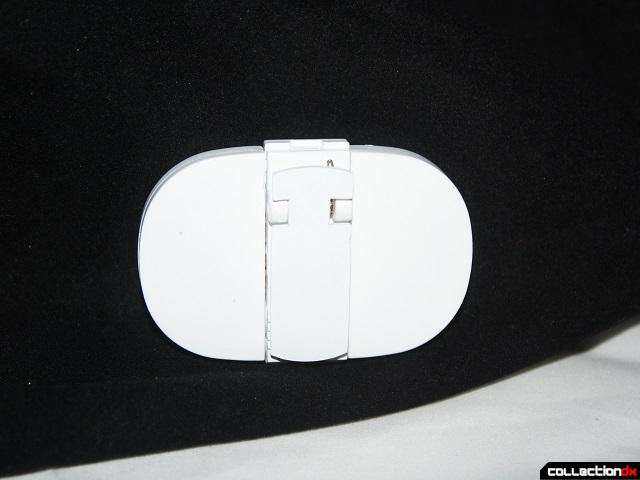 And the best part is this. The stand has a place for a lion key that looks just like the real thing. It's plastic, but still looks great, and even has a clip on the back so you can wear it. 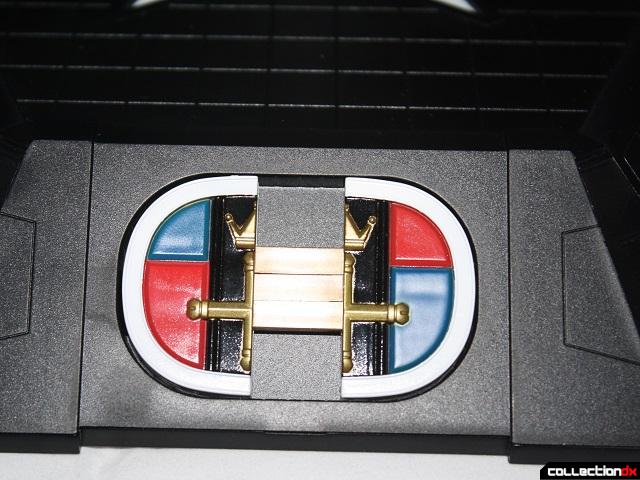 Removing the clip lets it transform from badge to key form, like so. 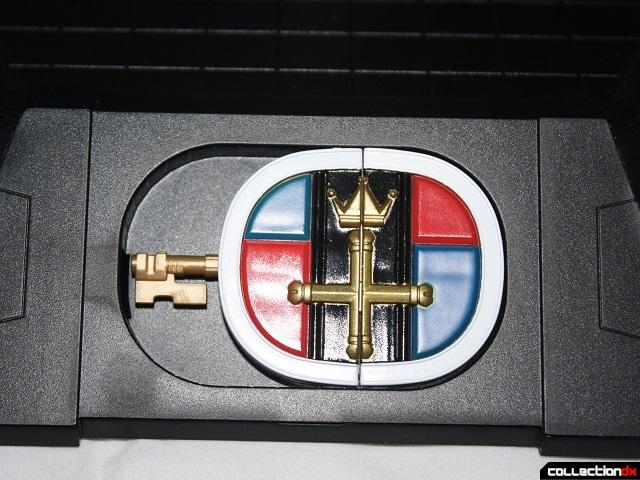 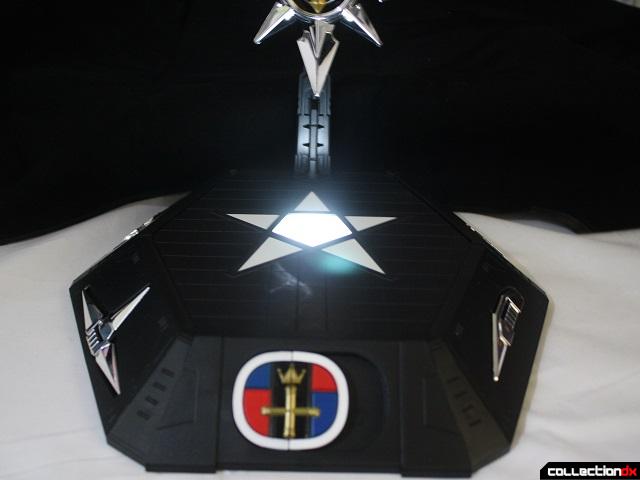 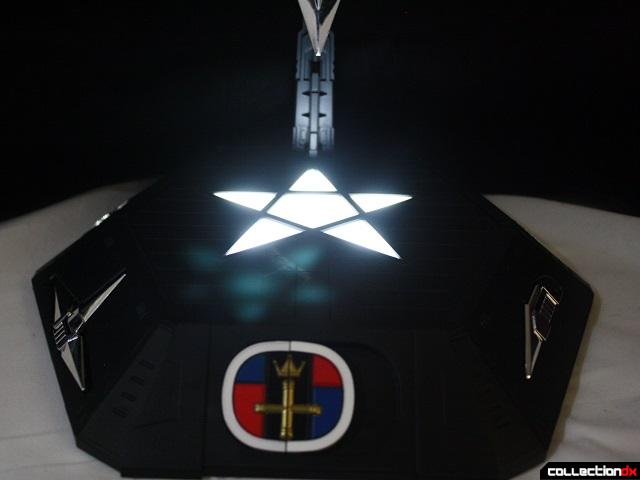 And once inserted, it activates the lights in the center, which illuminate with the same pattern and audio as seen in the cartoon, every time one of the lions was activated or Voltron was about to be assembled. Afterward, if the key is left in, you'll hear a lion's roar with the center lighting every few seconds.

I'm really big on powerful moments and themes, symbols and presentation. And seeing the lions launch or merge into Voltron is one of those sequences that I never get tired of, because it was done so perfectly. From the animation to the pacing, and especially the sound effects and music, it's an incredible experience every single time. If nothing else, I definitely give Toynami credit for capturing that. 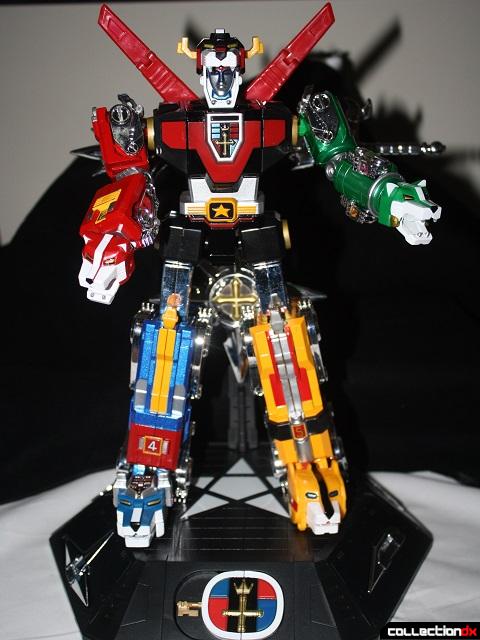 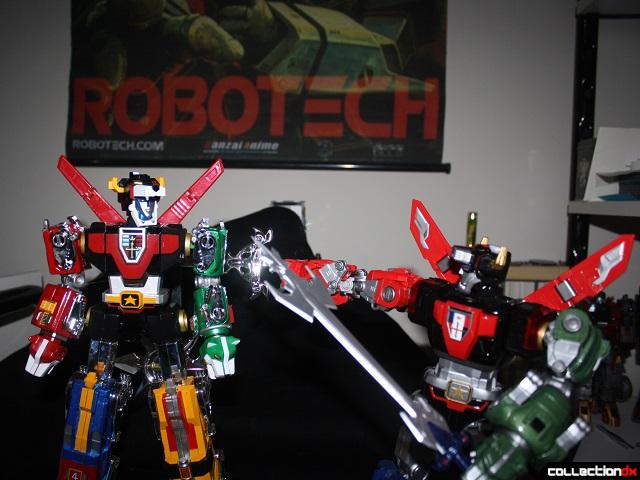 Overall, this set comes together pretty well, though I'm more likely to let someone else take possession of the stand and weapons. 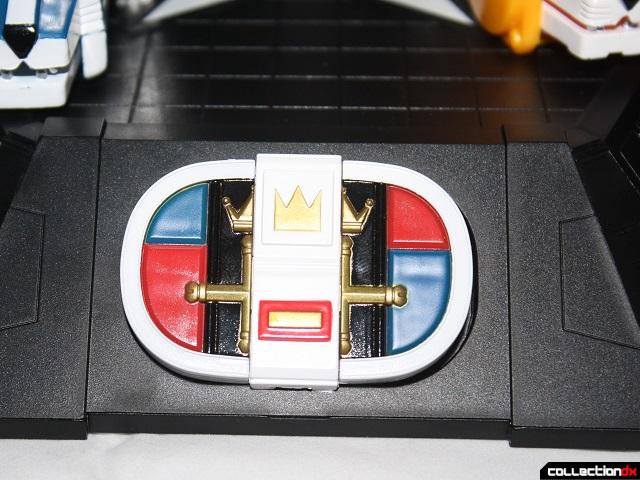 My first experience with Toynami's Voltron masterpiece is courtesy of V2, which I snagged, brand new from my local comic shop for $40. And even at that steal of a price, I quickly came to the conclusion that it wasn't really that much of an improvement over the original. I think that's a reasonable expectation when we're comparing something made in the late 70's to something made in 2004. The proportions are better, and articulation is sort of better (not that useful), but that's it. And that's just with V2, which is all plastic. I've heard mixed things about V1's ability to handle all its metal weight, and I haven't read any reviews on V3, but mine here is only good with his arms and standing on both legs. As soon as he's picked up even a bit, his legs drag, droop, and dangle like he's crippled. No hip strength whatsoever.

I love having the key and how it works with the stand, and the light-up eyes are cool, but none of that's worth the $225+ you'll pay to get this version or V1. You might be able to get V2 for as little as $100+, so if you're really interested, go for that. But otherwise, I strongly suggest you save your money and either track down King of Beasts from Mad Toys or lookout for preorders to go up for Toynami's all-new 18-inch super-poseable Voltron, made of super poseable lions, that's supposed to come out later in 2015.

7 comments posted
This or King of Beast?

Between this and King of Beast...I say, get the former instead. The robot form may look flimsy but at least it doesn't have QC issues unlike the latter. The lights and sounds are a welcome addition and from some of the hobby shops I've visited, the price is almost the same as King of Beast.

Yeah, if you do get a bad KoB with issues, you'll be hard pressed to get it replaced without altogether buying a new one. So far, mine has held up perfectly fine. Two or three joint covers have popped off of the legs of the black and green lions, but I put them back in and they stay put.

Makes me wonder if the owners of Mad Toys and Miracle Productions are one and the same, since both KoB and Vehicle Voltron have defective parts and both companies have sloppy customer service when it comes to replacing parts.

It's a great piece for someone that does not already have the V1 or V2. While Soul of Chogokin it is not, by any stretch of the imagination, it holds up well enough for display and light posing. I would not recommend it for "play" or frequent transformation as the chromed limbs will not long withstand that while looking unstuffed. The figure is arguably the most anime accurate yet. Certainly more so than the cool but stylized MadToys KOB. For a die cast figure it most certainly comes with an adequate amount of diecast. Perhaps too much as it is a bit weighty for its joint engineering. If you already have V1, then the only reasons I can see for wanting this are the light up eyes and stand gimmick (not worth it) or to display one as Voltron and the other as Lions (much better plan).

The stand is nice. I kind of wish that it had a clip or doll display arms to support Voltron. As it is it is really just a stage for him to stand on. An extra piece would have eliminated any risk of shelf diving.

The figure also looks great standing beside the Miracle Metals somewhat infamous Vehicle Voltron, which is the same size and scale.

I will give V3 credit for that too. Before it was announced, prices had skyrocketed for the previous two sets. I'd seen both go for as much as $400, but thankfully, not anymore. If the new one delivers next year, I imagine prices on all three sets will probably stay about where they're at for a while now. So it's definitely the best time to get one now.

Exactly. Honestly if you do not have a nice die cast Voltron then the 30th anniversary V3 version is probably the best option to get. Yeah the V1 may be going for $20 less aftermarket. But for an extra $20 the stand and lighted eyes are a nice feature. They just aren't worth it for the cost of rebuying the entire figure.

Owned v1 since it was released years ago. the droop and ragdoll has been a problem from the beginning. Recently he fell from a static pose onto the wood floor, and suffered a left leg amputation I am unable to fix. I am really mad at myself for buying the damn thing in the first place, every time I see him I see a big mistake looking back at me. Toynami is not Bandai, and their masterpiece Voltron is not SOC. If you get an urge to purchase this toy, do whatever it takes to avoid him in your home. Just buy a Taiwanese Lionbot, and be happy it's a brick. A sturdy, reliable lead paint covered engineering marvel.