[Reviewer’s Note- I no longer have access to my photo tent, which is in a different country, and as such this review took place on the banks of Kyoto’s Kamogawa on a very windy day.]

LaQ is a building system that has carved out a decent corner of the Japanese construction toy market, and looking at Josh’s previous review, it’s working to make some global inroads as well. There are only 7 different pieces: Squares, Triangles and 5 different connectors of varying angles.

U-LaQ is a collaboration(?) between LaQ and Ulala Cube, a company that seems to primarily specialize in licensed character goods such as keychains and stationary. The packaging credits Ulala Cube with marketing and sales, but after going through their website I’m honestly still not quite sure how they come into the picture. At any rate, U-LaQs sets are notable because they’re all licensed tokusatsu properties, currently consisting of Ultraman, Godzilla, and Kamen Rider (As an aside, the LaQ Mazinger was not part of the U-LaQ brand).

The set I picked up contains Kamen Rider (New) 2 and V3. Aside from the promise of edutainment the box is really appealing, with pictures of the two Riders alongside their plastic doppelgangers. There isn’t a total piece count written on the box, but it’s 182. 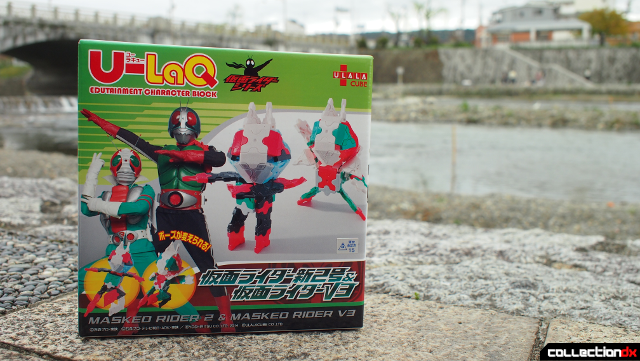 Further promised is the ability to build the figures in their Rider Kick poses. 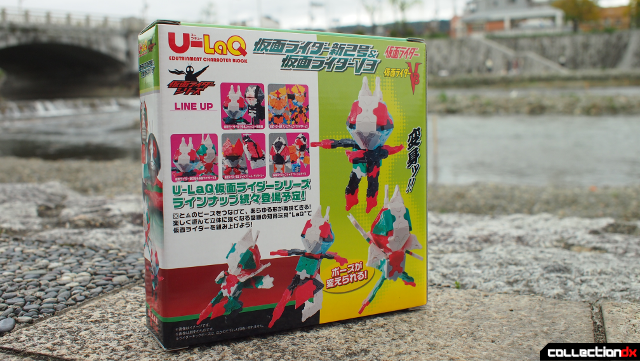 Opening the box, I was first struck by how small the footprint of the baggie was, compared to the products of unnamed, competing block toy companies. 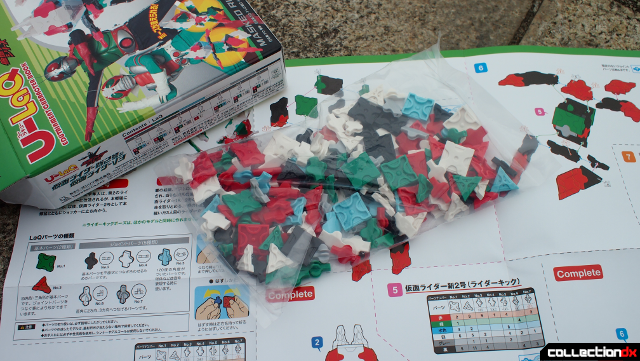 The instructions are fairly straightforward, although at times I had to do some squinting to figure out exactly what I was looking at. 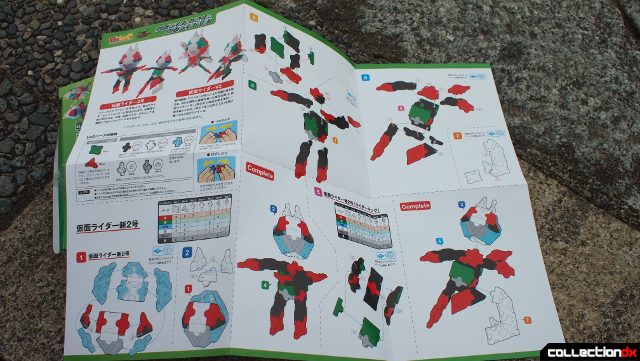 The pieces have a nice snap when you put them together. 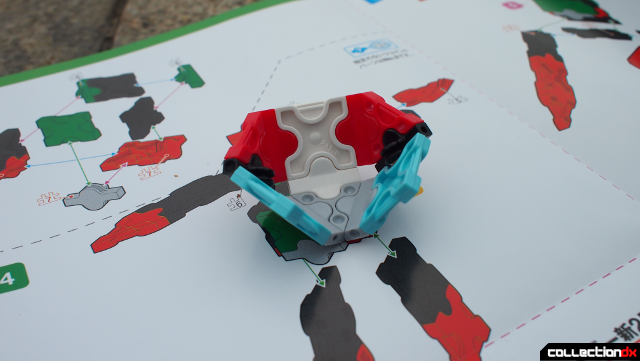 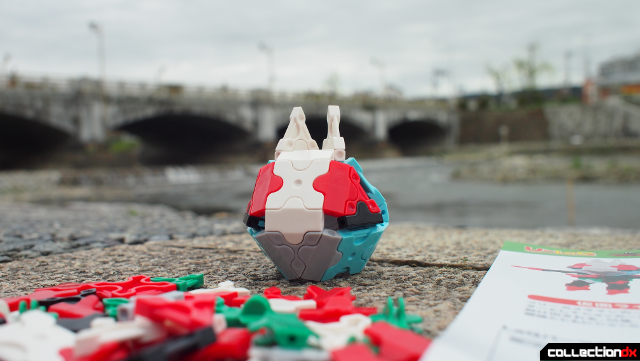 [I forgot to take pictures of the finished Rider No. 2 while on location, so here he is creeping around outside my apartment] 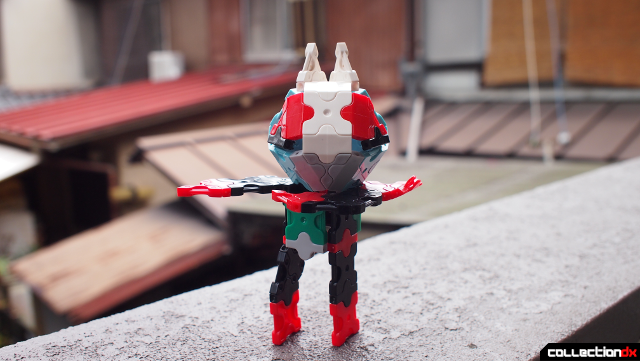 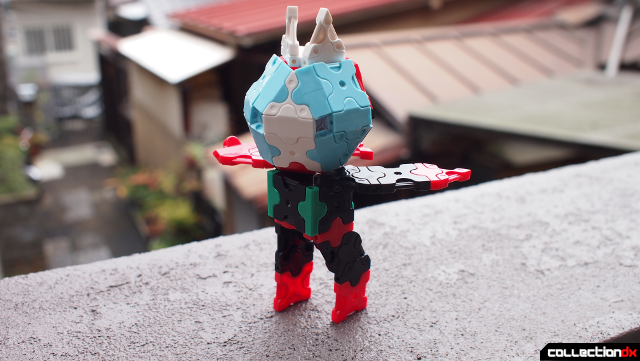 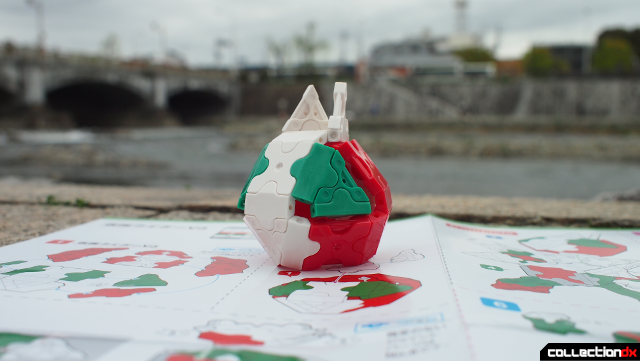 The way his arm merges with his mantle is a little funky, but it works. 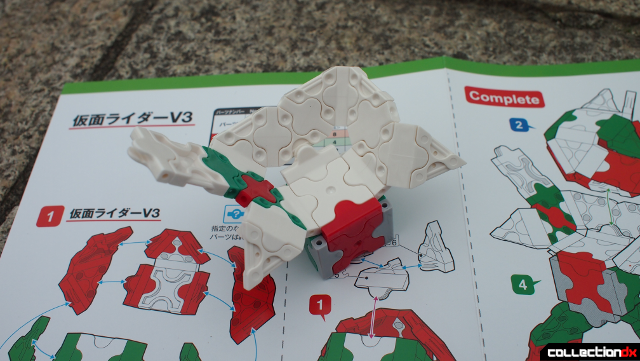 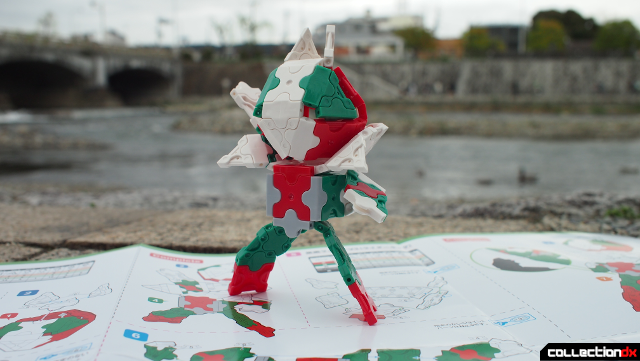 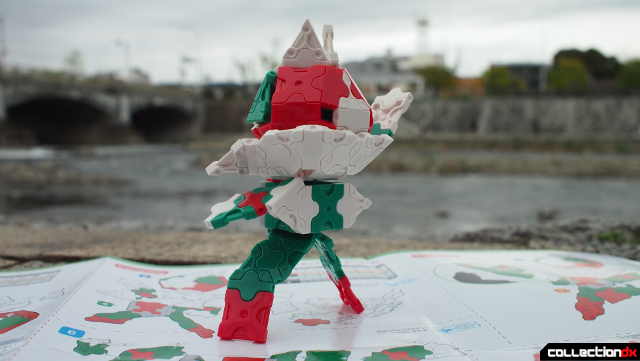 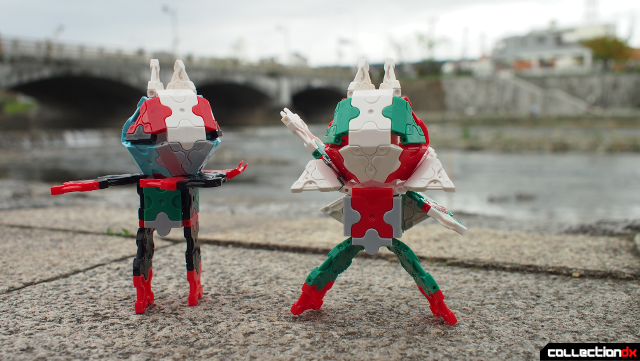 Here is a carefully procured object for size comparison just for this review, and totally not just my garbage. 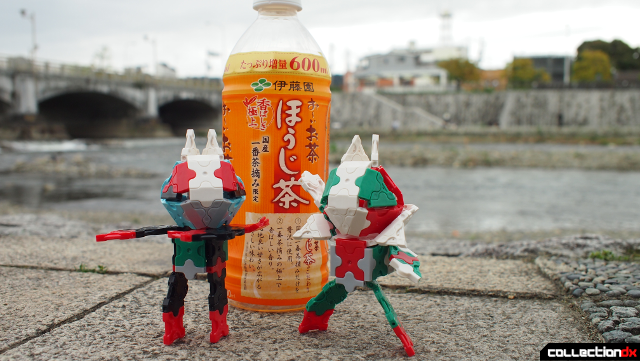 This took me about 40 minutes to get to this point, and I was feeling pretty good for figuring out a toy aimed at ages 5 and up. With the Henshin poses out of the way, I was ready to get on with the kicking. At this point I had very few loose pieces, although from the wording on the box and a cursory glance at the instructions I was under the impression that the Rider Kick poses were mostly a matter of rearranging the limbs. This was not correct.

Building the Rider Kick pose not only requires basically entirely rebuilding each figure from the neck down, but you also have to take apart the other figure for parts. Sure enough, in small print on the back of the box, right underneath the ‘’Pictures are of a Prototype and Subject to Change’’ and other ignorable warnings it says ‘’The Rider Kick Pose cannot be Built at the Same Time as the Other Model’’. Well.

At this point it was getting increasingly windy and the forecast was calling for rain later in the day. I soldiered on though, figuring that at this point I was already the foreigner playing with toys out in public and I might as well see it through. 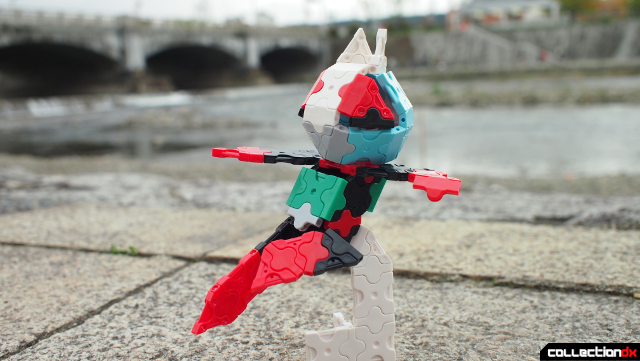 After that, I got to rebuild V3 and take apart 2. 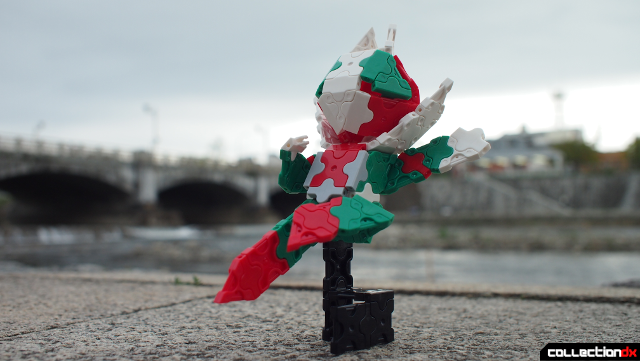 By the way, this is what No. 2 was looking like while V3 enjoyed being airborne. RN2's Kick pose leaves V3 in more or less the same state. 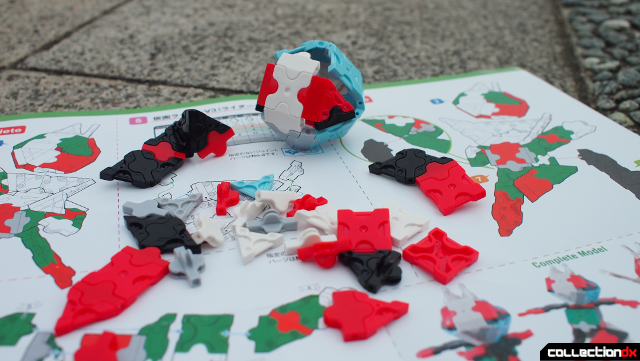 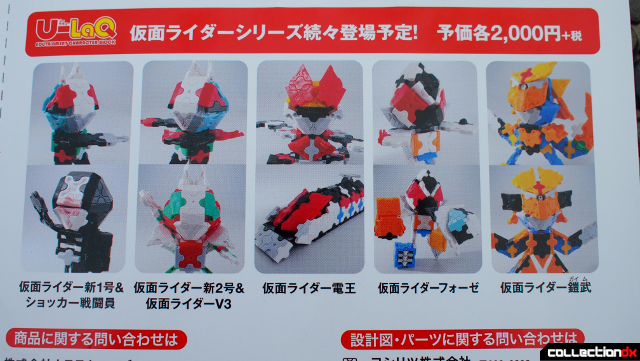 I would have picked up the first Rider, but the Combatman’s horrific maw makes him look like some sort of Cenobite and I got spooked. I first saw these in a store display with all of the sets built, and I immediately recognized the Showa era Riders, which is kind of my main takeaway from these. Kind of abstract, but easily recognizable. The build process was enjoyable enough, and I've found myself going back to the figures and reshaping their limbs for different poses. I just wish they included the extra pieces for the alternate modes.

I think the only place I've seen this in the US is at the Mitsukoshi store in Epcot at Disney World (I guess they're in other Japanese shops in the US but sadly Florida is short on those). Now that a lot of Targets have a section set aside for other kinds of building toys like Sprukits and Nanoblocks, maybe LaQ will find a new market.