The GX-64 Soul of Chogokin Space Battleship Yamato 2199 is a new mold of the iconic vessel from the show of the same name. Bandai has released three Soul of Chogokin quality Yamatos (Yamatoes?, Yamatii?) And in my opinion, this is the best of the three.

The GX-64 Yamato 2199 arrives courtesy of Bluefin Distribution, and is available at Big Bad Toy Store.

I still question why the Yamato is in the Soul of Chogokin line at all as the line was meant to be robots only. Bandai even started a Soul of Popynica line for vehicles, but that line fizzled out and future entries went into the SOC line. These days, the differentiator for what makes something a Soul of Chogokin, or just Chogokin, seems pretty arbitrary.

The box is nice and long, and is reasonably compact. Inside you get a large styro coffin for the Yamato, and two trays for the accessories.

I was pleasantly surprised at how little there was to assemble on the Yamato. All of the small antenna are already attached. You just have to add the cannons and the stand and you are (mostly) set to go. 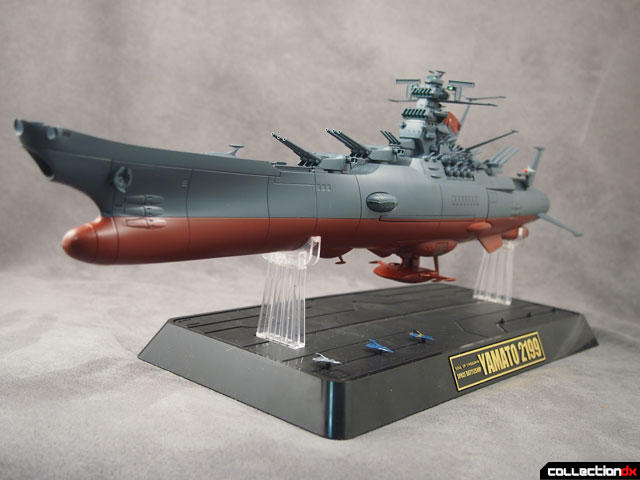 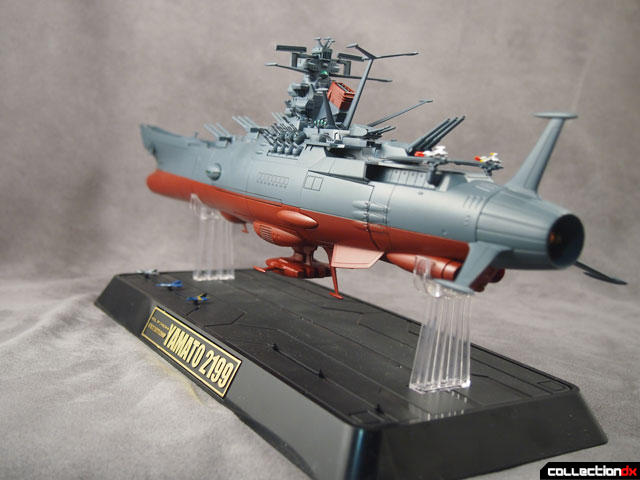 The ship measures 425mm long and the hull is mostly diecast metal. Unlike the SOP version, this one actually feels like a gokin. It feels really good in your hands. And also unlike the SOC, you can also handle this without fear of all the spindly bits flying off or breaking. 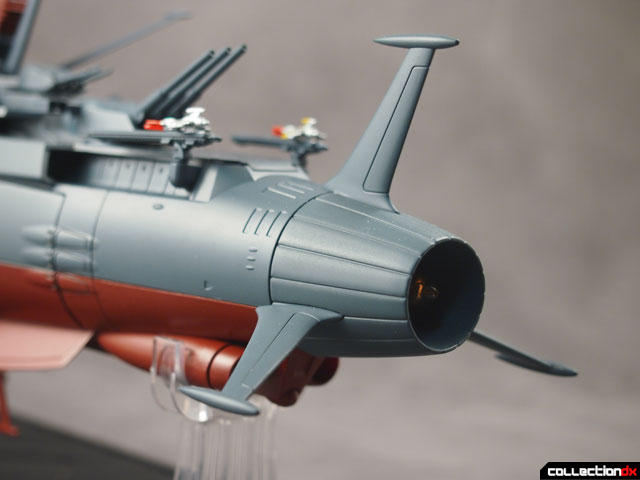 As I mentioned before, this version of the Yamato comes from the recent Yamato 2199 series. It’s been released in the states as Starblazers 2199, and as such the domestic release of the toy comes with Starblazers branding. This version, despite looking similar to previous releases is an entirely new sculpt based on the 3D model used in the animation.

Of course, all the main deck guns move. The 5 batteries rotate when you rotate the dial on the side of the ship. Each gun barrel can also move independently. The small banks of cannons on the side do not move. 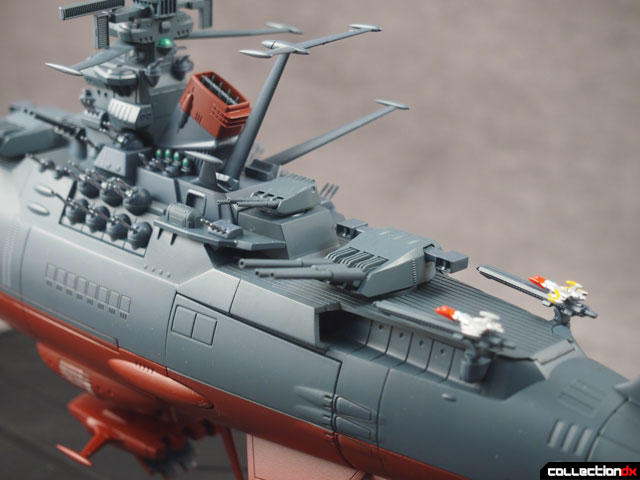 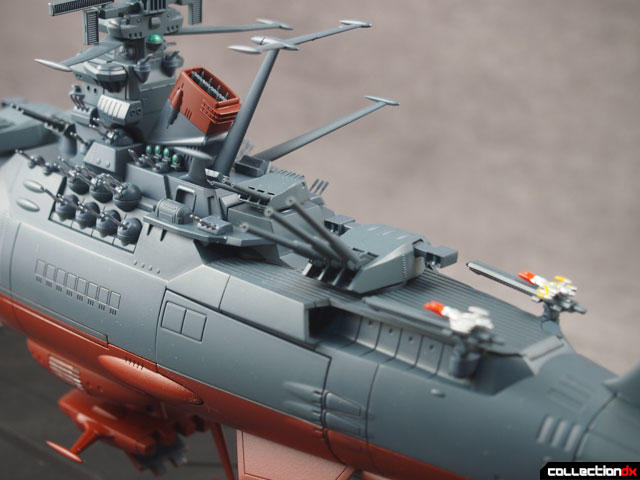 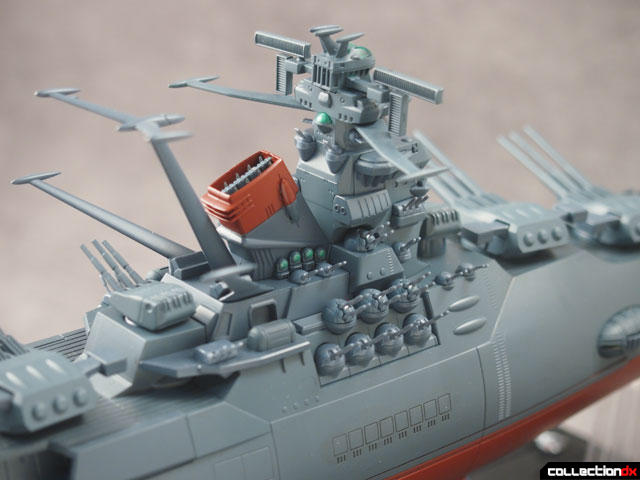 The launch ramps at the rear of the ship can be rotated and need to be attached. The cosmo fighters can be attached via a peg on the ramps. 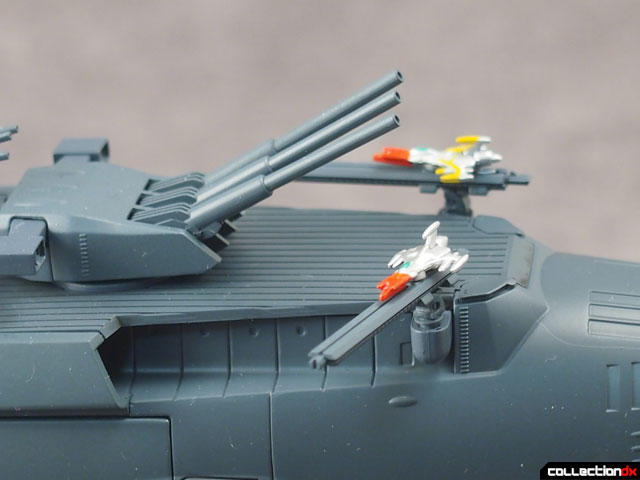 On the side is a panel that when opened reveals the storage for the fighters. Each bank of fighters can rotate manually. The launch ramp also opens and has a peg for the display of one fighter. 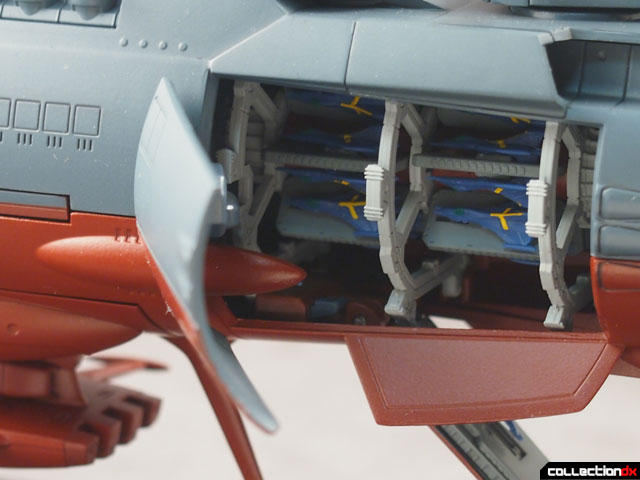 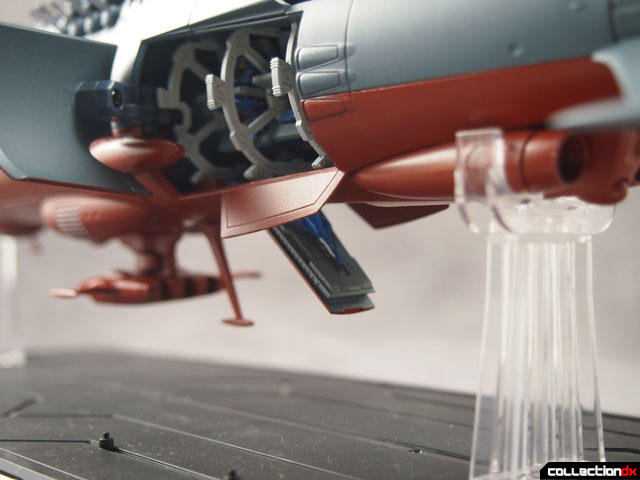 In the middle of the ship is the secondary bridge. This bridge serves as the loading area for the Yamato when the ship is docked. The loading ramp can be opened. 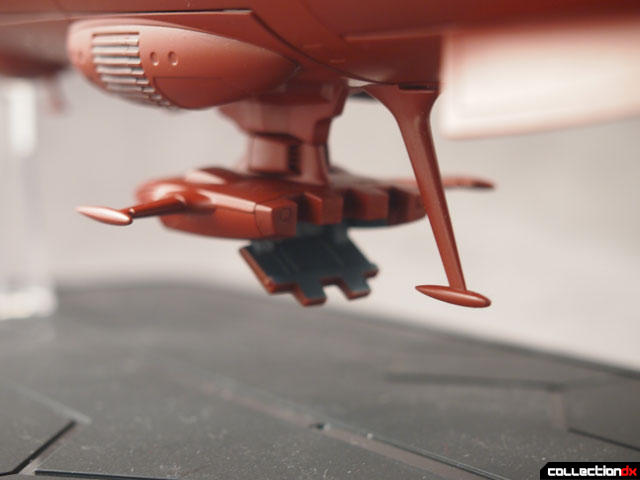 Behind the bridge is what used to be a smokestack. Now, it houses a bank of missiles that can be shown by sliding up the oval part on the stack. 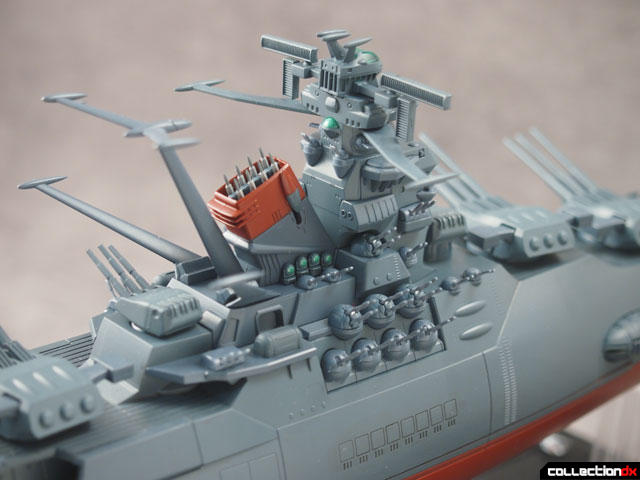 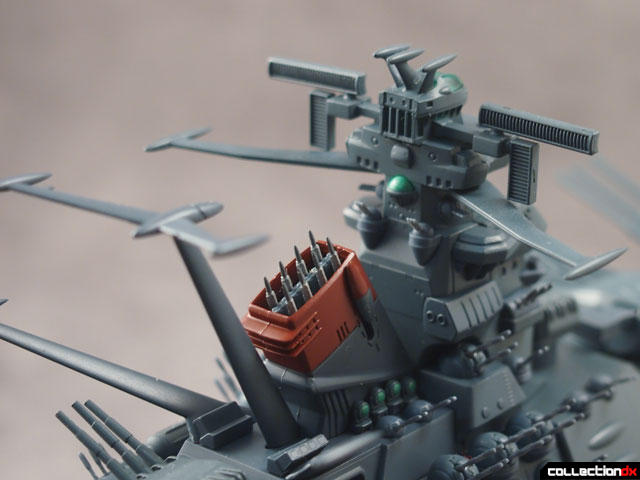 The entire bridge setup looks just like it does in the anime. I noticed one of the radar panels on the side of the bridge droops slightly on one side. Not a big deal, but worth mentioning. 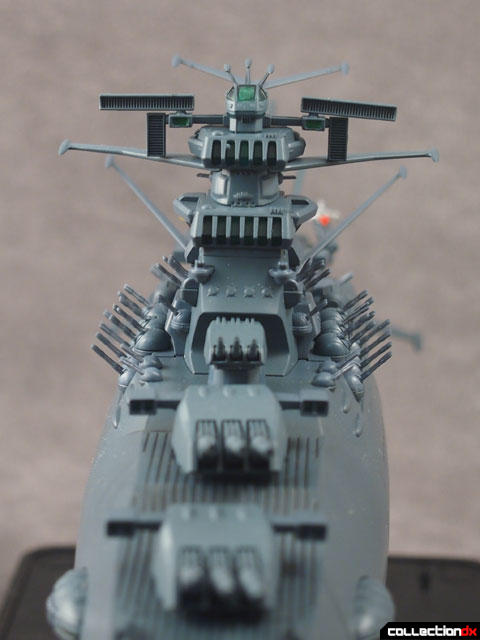 The rocket anchors are included but are separate parts. To display them simply replace the placeholder anchors with the chained ones. The anchors are very long but look cool. I would have liked to see a way for them to retract into the body rather than be separate pieces.

Also there’s that bit on the tip of the nose that comes off. I have no idea what that does. 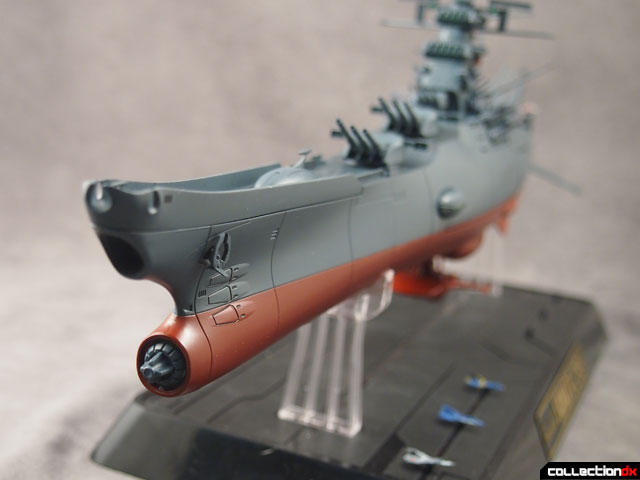 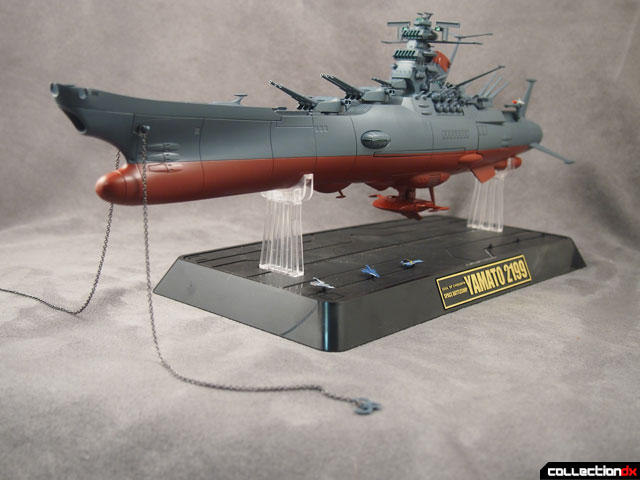 Wings for atmospheric flight are included and must be attached. They fit into spring loaded panels on the side easily. The SOP contained panels that were build in to the body and popped out. I’m not sure which type I like better. 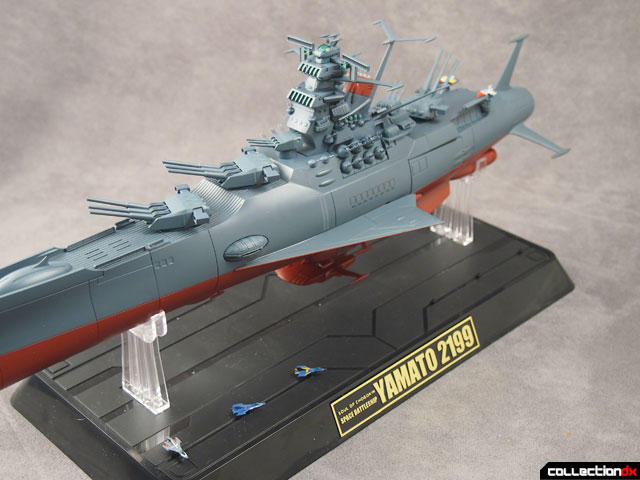 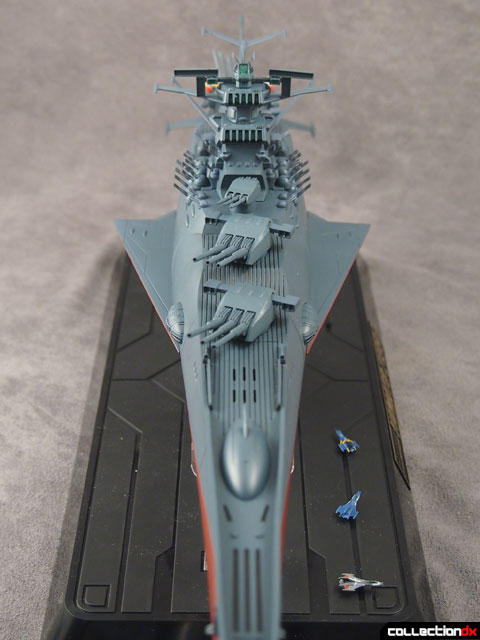 The stand includes two sets of clear mounts that enable you to display the Yamato in a basic horizontal position or listing to one side. I would have much rather prefered the base to the previous SOC Yamato which enabled you to display the ship tilting up. Also, this base has no attachment points for accessories or the remote control.

Speaking of the remote - this version of the Yamato also has lights and sound. A six-button remote activates them and is powered by 2 AA batteries in the remote and 2 AA batteries in the ship. The batteries are stored in a removable panel above the secondary bridge and both the remote and the ship have on-off switches.
When you turn the Yamato on, the bridge and engine lights light up with an activation noise. If no other sounds are activated, the Yamato will sleep after 2 minutes. I know all of this because Bluefin has included an english instruction sheet for the effects.

To activate the Wave Motion Gun, press and hold the A button on the remote. The gun will begin to glow and you will hear it “warm up”. As the cycle reaches it’s peak, release the button and the gun will “fire” with a series of colors and sounds. 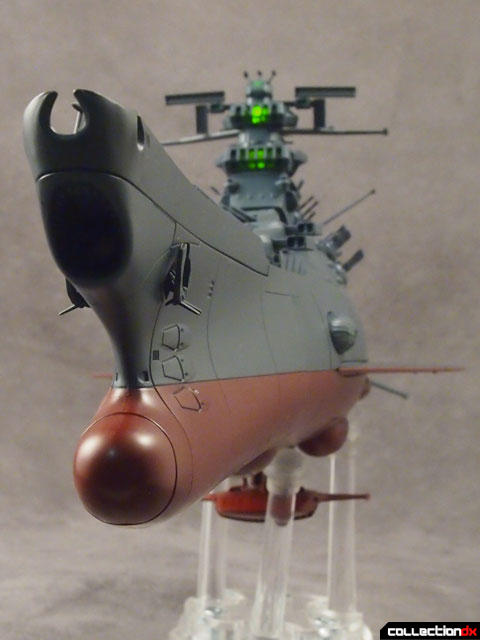 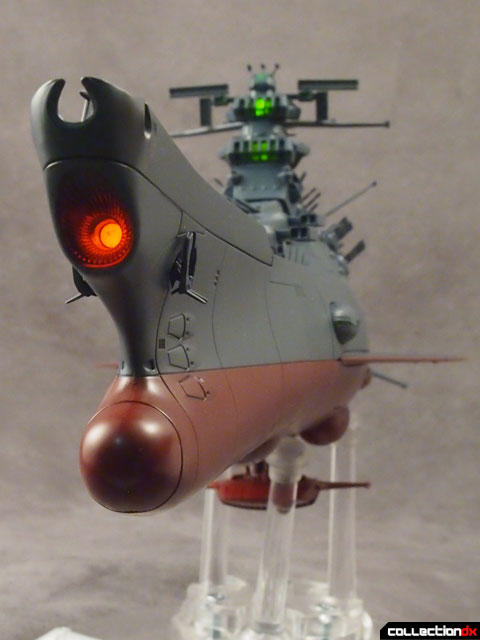 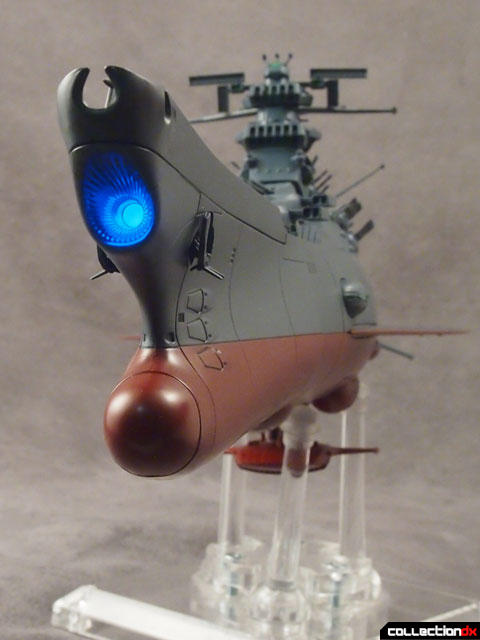 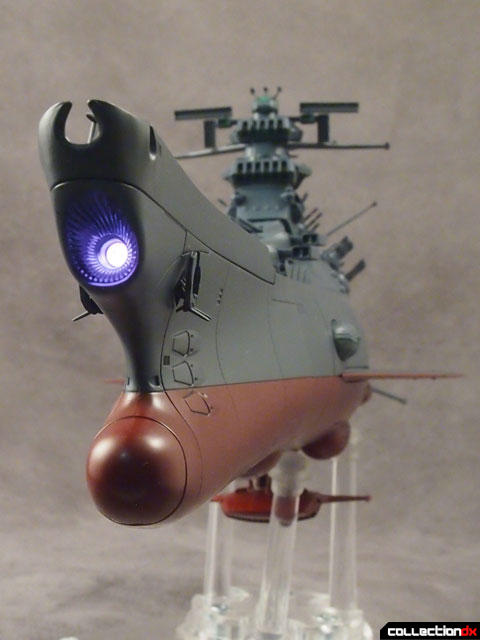 Another series of button presses activates the main engines. Along with sounds these lights pulse when activated. 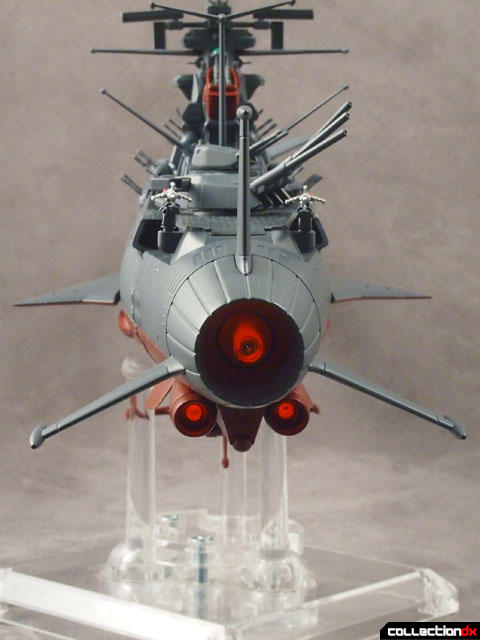 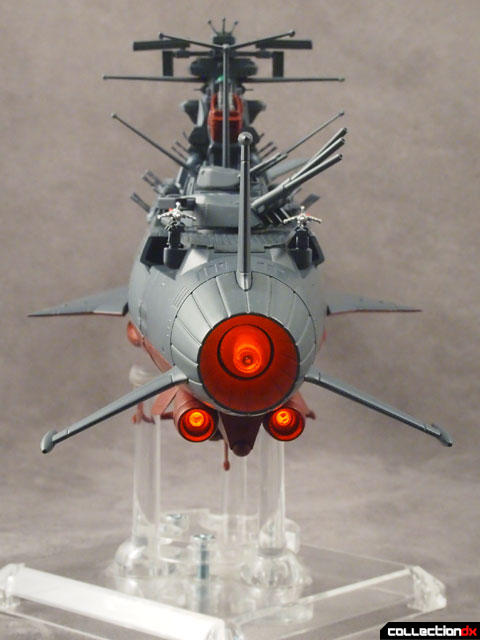 All other sounds only light up the bridge when activated. The full list of sounds includes:

For each fighter included with the set you get a stand with a flexible arm. This is meant to simulate the fighters flying around the Yamato. It’s a neat effect but the stands topple easily. There are two different sizes of stand.

When placed next to the SOP Yamato you can immediately see the difference. I don’t have the recently released Yamato SOC so I cannot compare those, sorry. 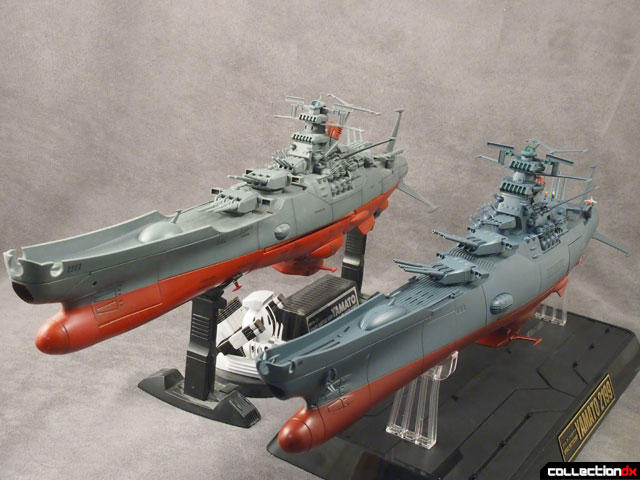 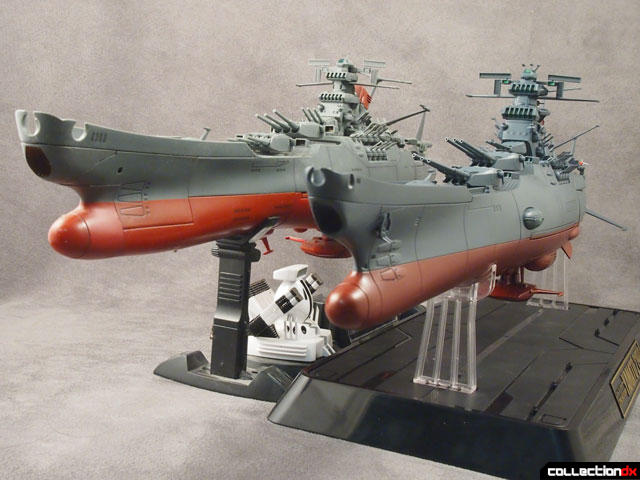 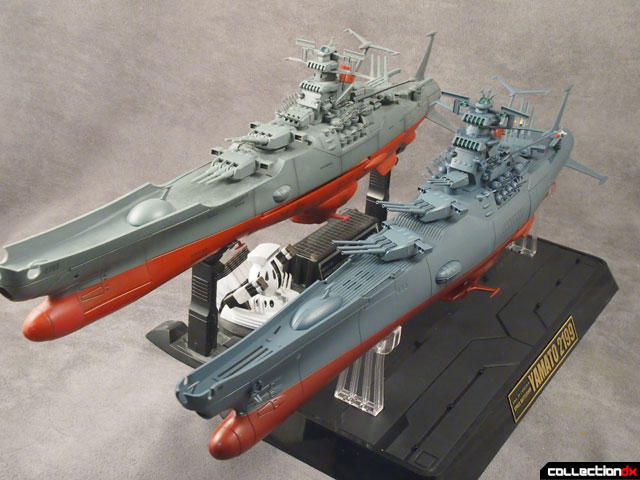 The new Yamato has a much more refined appearance due to the sculpt deriving from the 3D model. There was always difficulty deciding on the proper appearance of the Yamato due to different animation styles. Now, a true-to-screen Yamato can be made.

I do miss the inclusion of the Cosmo Cleaner. 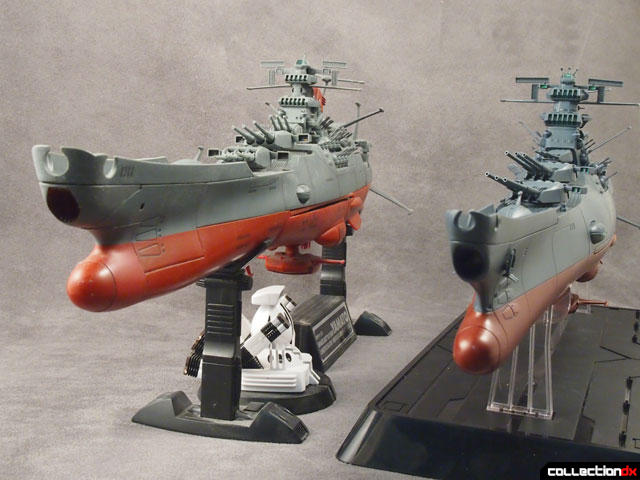 A closer comparison would be to the recently released Soul of Chogokin Andromeda. The only thing that keeps them apart is the weathering on the Andromeda. In the 2199 Anime, the Yamato is depicted without weathering, so that is the direction the toy took. 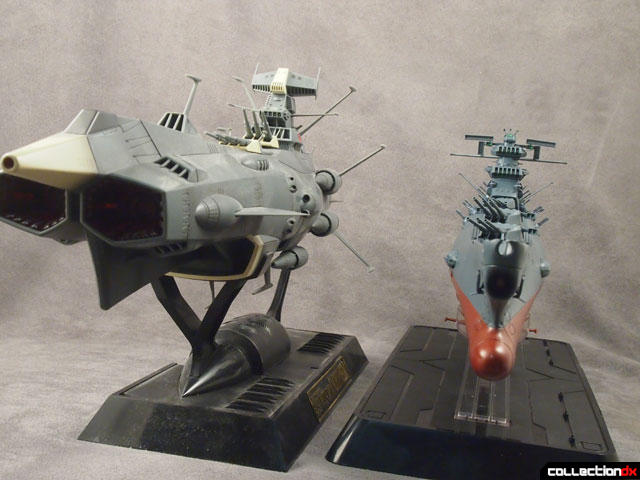 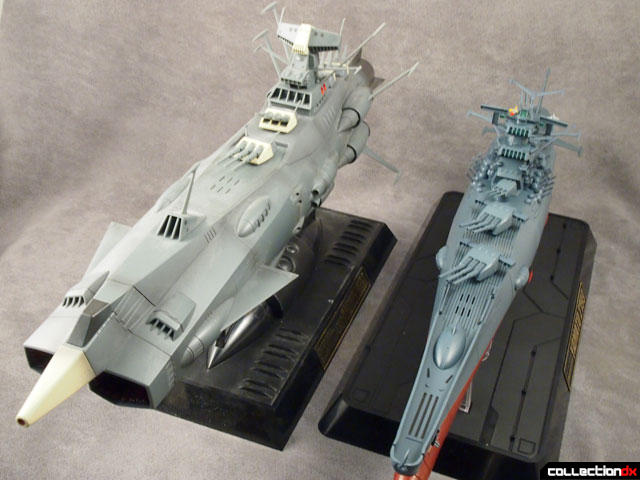 As I said, this to me is the Ultimate Yamato toy up to this point. If you are looking for an excellent modern representation of this classic Starship, look no further.

The Soul of Chogokin Yamato 2199 is available at fine retailers such as Big Bad Toy Store or Amazon.com