Naruto appears thanks to Bluefin Distribution. You can get yours at:

Uzumaki Naruto is a ninja of the Hidden Leaf village. With the legendary Nine-Tailed Fox sealed with him, Naruto aims to one day become the Hokage of the Hidden Leaf Village. I’m not going too much about Naruto as I’m sure anyone reading this probably has at least some idea of what Naruto is and trying to write a summary of a series that spanned over fifteen years would be pretty long. 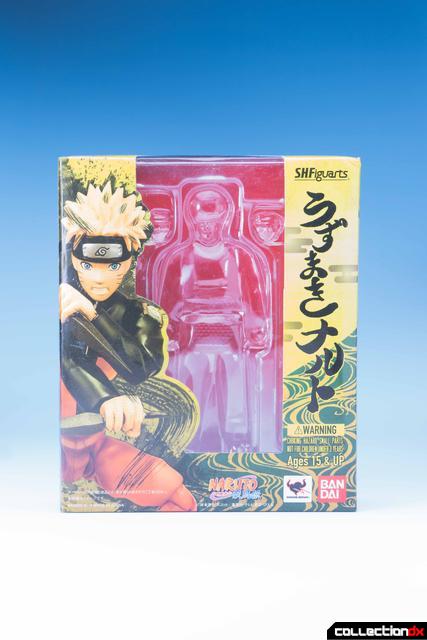 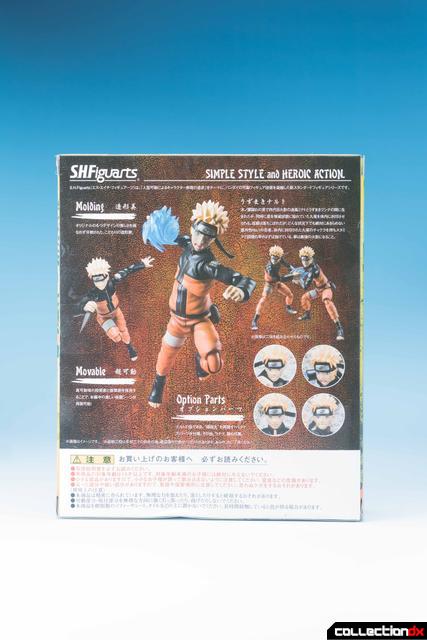 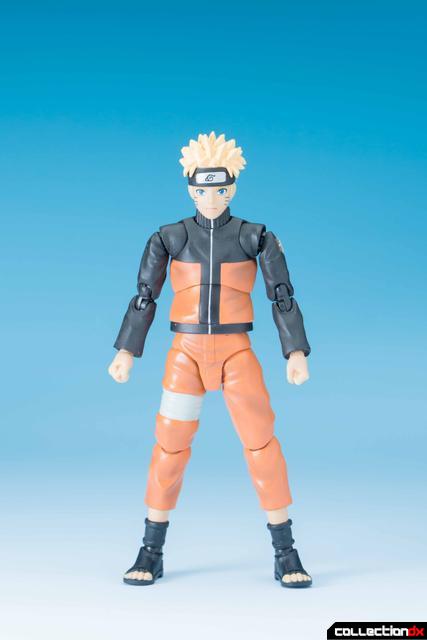 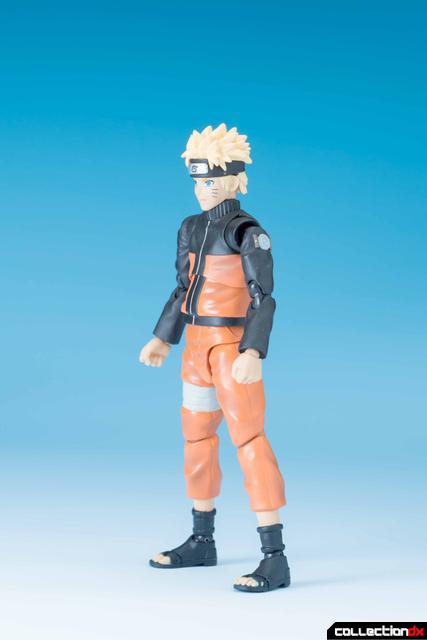 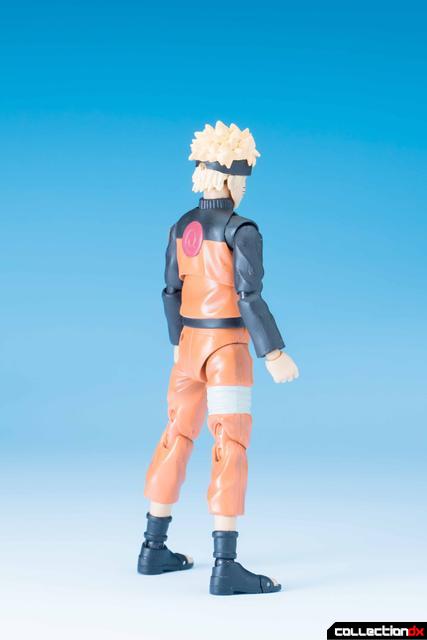 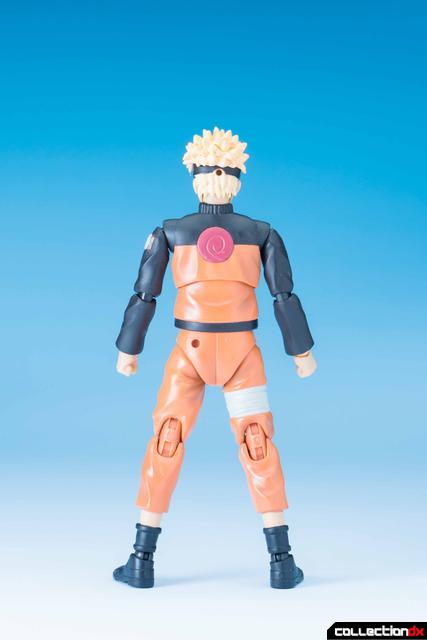 Uzumaki Naruto comes in the standard SHF window box packaging though I really like the background design on the front of the box.  This particular version of Naruto seems to be based off his Shippuden outfit featuring a black and orange jacket compared to his original blue and orange one. While Naruto looks pretty good, there is something that feels off about it. I think it might be that body is a bit disproportionate compared to the head, especially the lower torso. I guess part of this is due to the appearance of looser fitting clothes, but I think a tighter fitting outfit similar to the Figuarts Zero version would have looked a bit better. 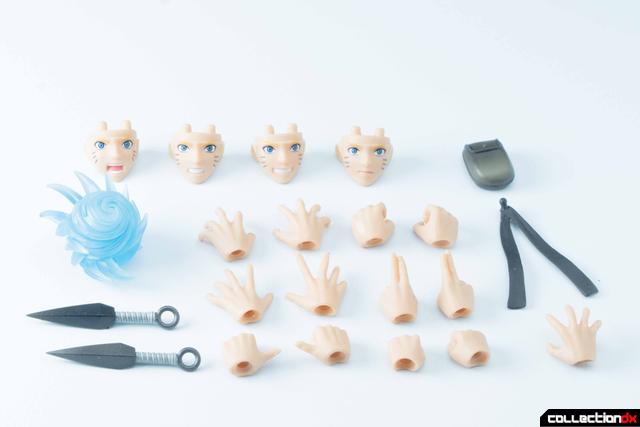 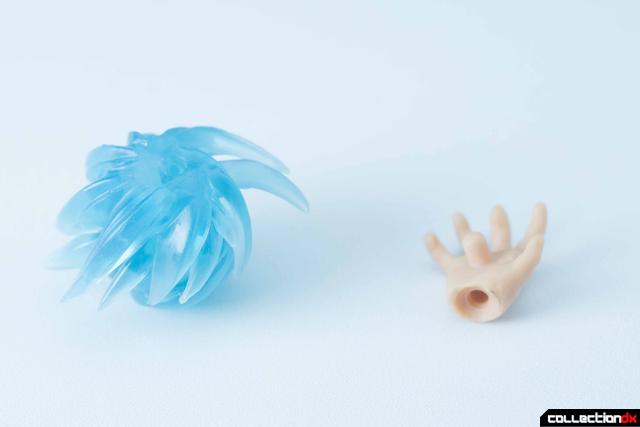 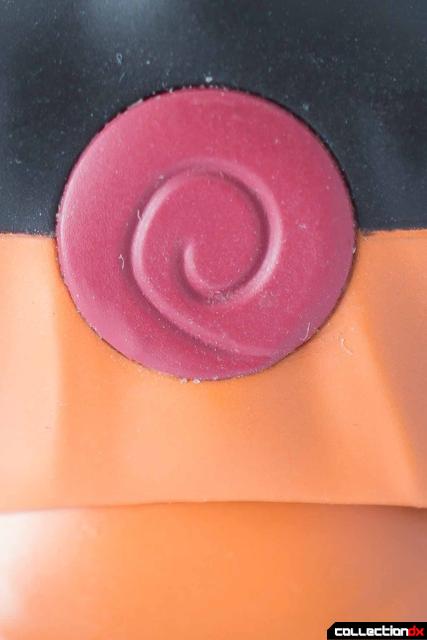 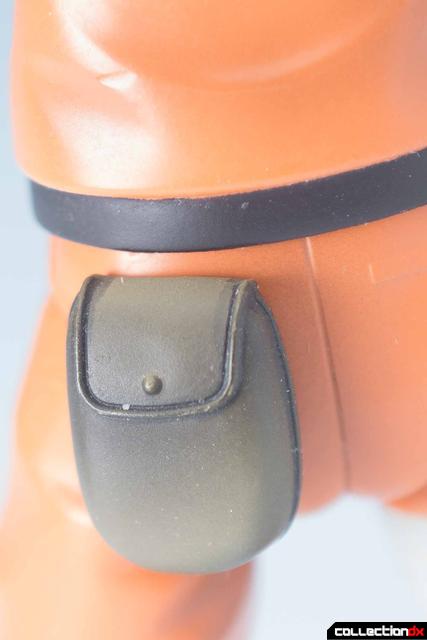 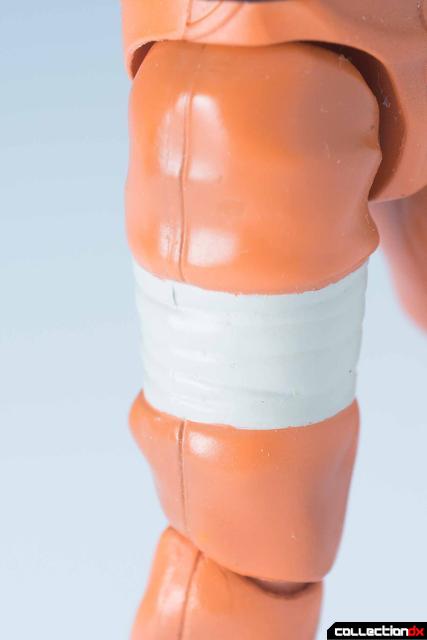 Naruto comes with a whopping 6 pairs of hands along with a right hand specifically made to hold the Rasengan effect. Also included are two kunai, 4 faces, headband and a pouch that attaches to the hip. The hands are really great as it allows you to pose the figure quite expressively in many poses and the Rasengan effect is rather neat, attaching to the special right hand with a peg. There are grooves on the back of the Rasengan for the fingers so it can sit securely without moving around.

The four faces allow you to display at figure with a natural, smiling, grinning and shouting expression. It’s nice that they included four faces but I do wish they included a Sage Mode face as it seems like it was one of the more iconic looks later on in the series. While faces are undeniably Naruto, they still look slightly off as well. The hair color doesn’t seem to be as bright yellow as his animated counterpart and something about the face just doesn’t seem quite right.

One thing I do wish they did with the figure is add a bit of detailing to the nice sculpted elements of the body. The spiral on the back is molded but it could really use a nice black or brown wash to make it pop out. The same could be said about the molded right leg bandages that would benefit from some kind of black wash to create some separation between all the white strips. The pouch also has a tendency to constantly fall off while messing with the figure. I’m not sure if this is an issue with all the Naruto figures or just mine, and is more of a slight annoyance than anything else. 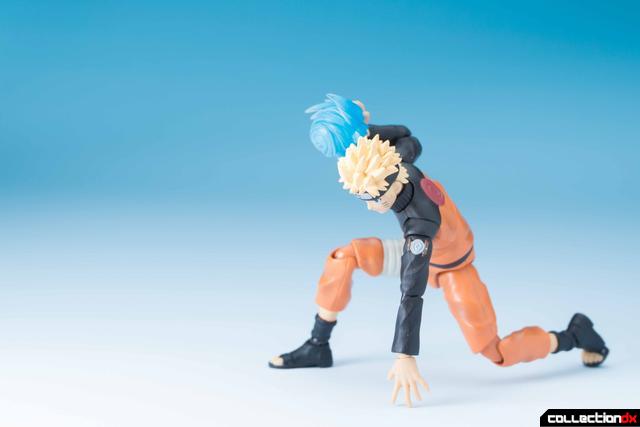 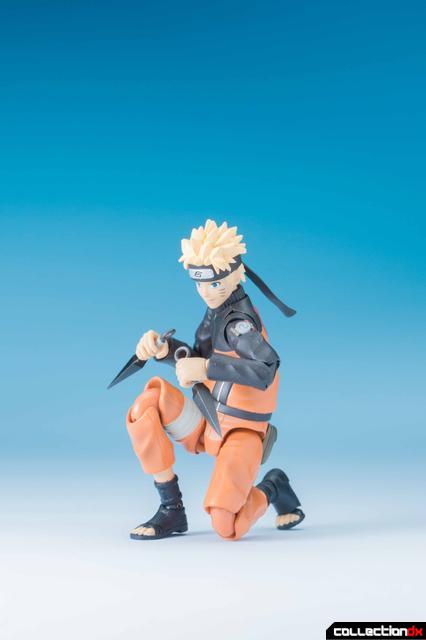 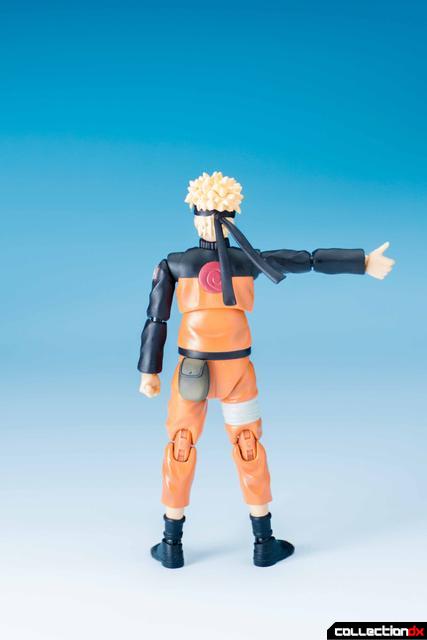 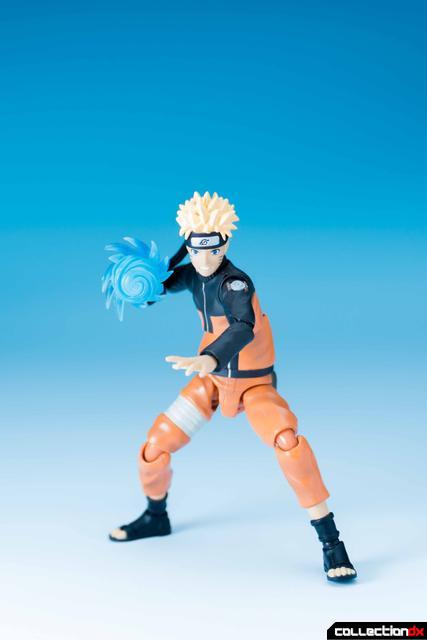 One thing the Naruto figure really has going for it is the fantastic articulation. This is probably due to the fact that he’s wearing a normal outfit without armored areas that get in the way. The kunai and Rasengan effect parts are pretty much all you need for whatever ninja poses you desire. 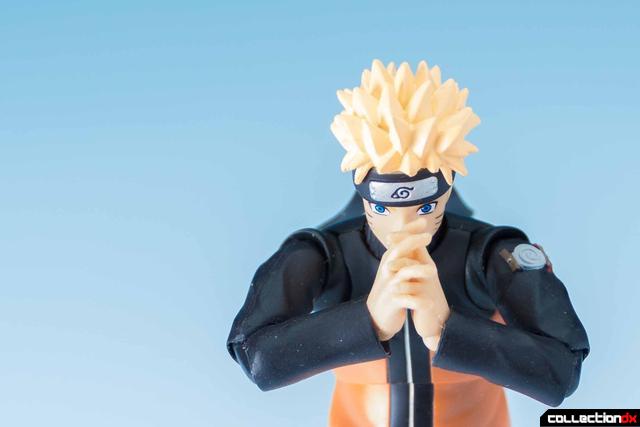 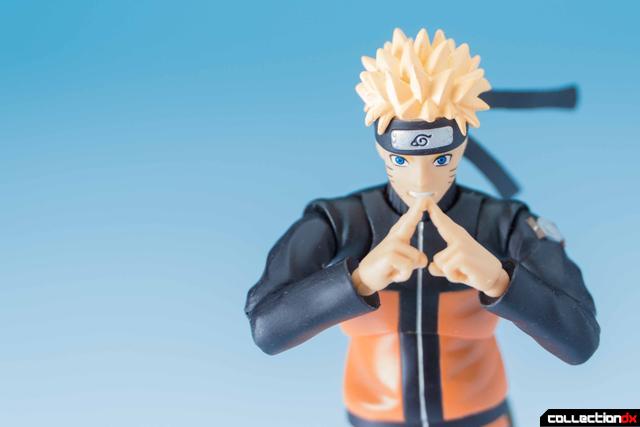 The large assortment of hands also allows you to recreate a bunch of the ninja hand seals commonly seen in the series. While you won’t be able to do all of them in perfectly, you can do quite a few of them fairy closely. 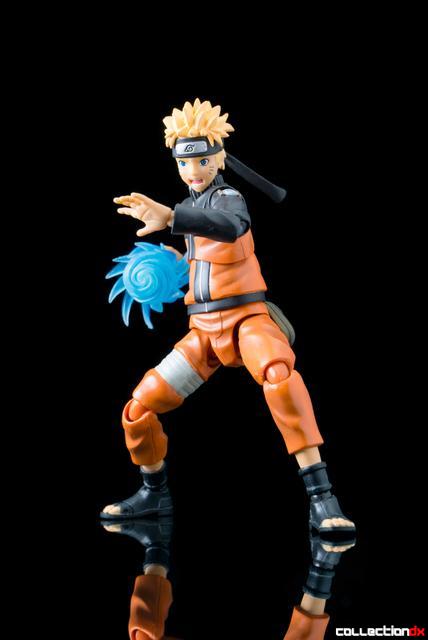 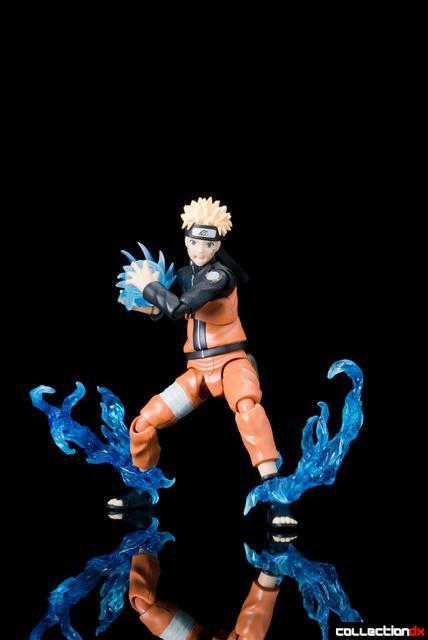 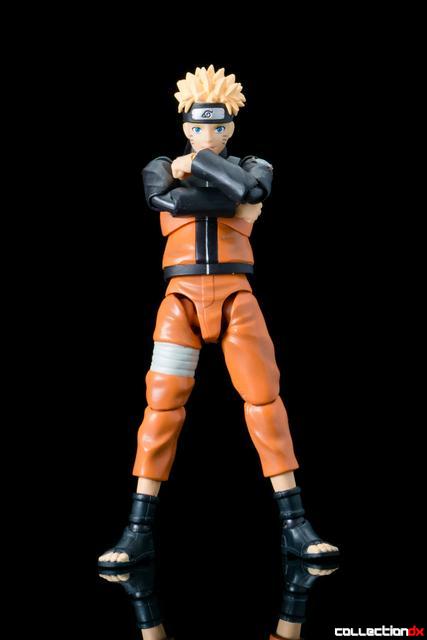 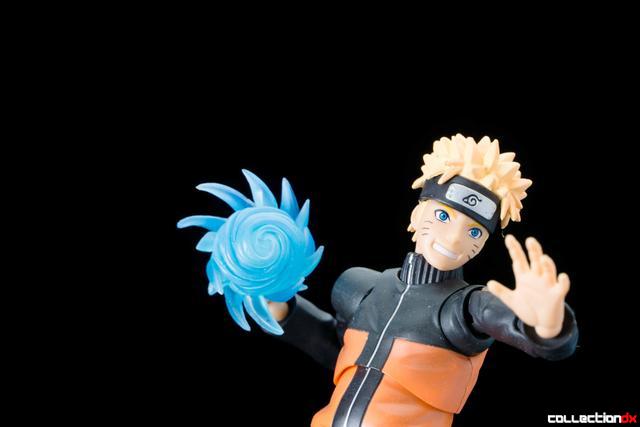 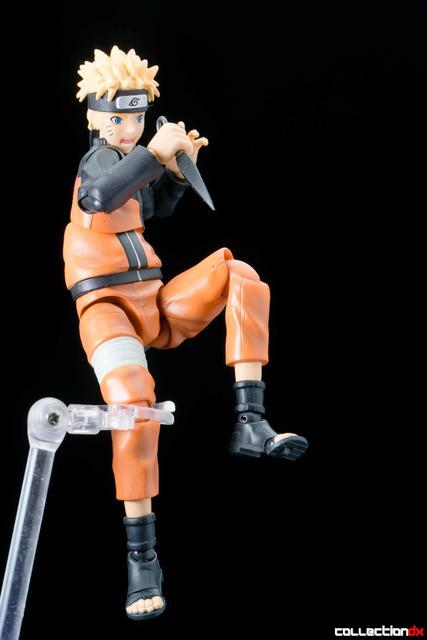 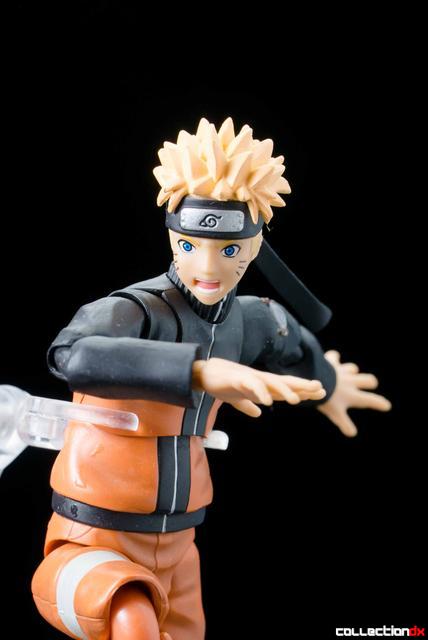 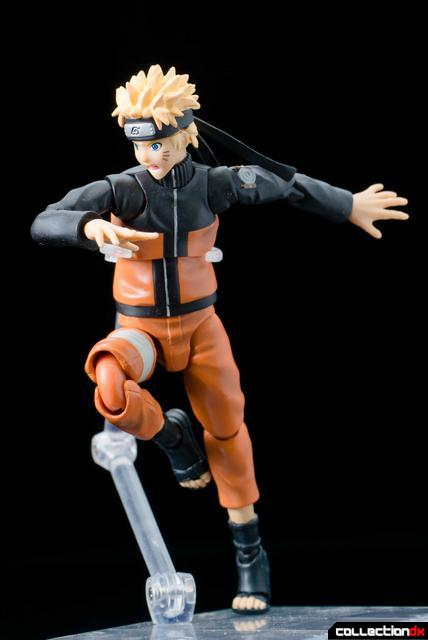 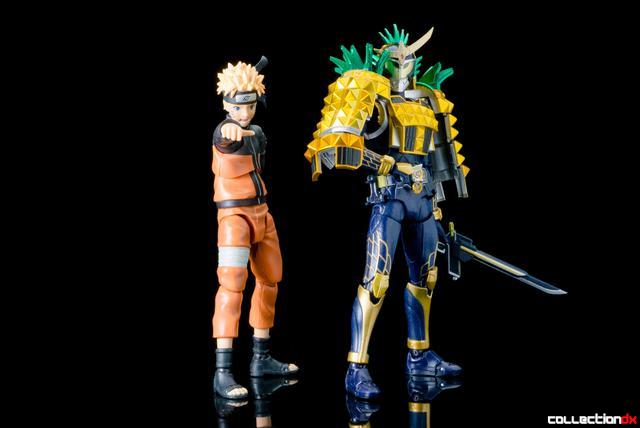 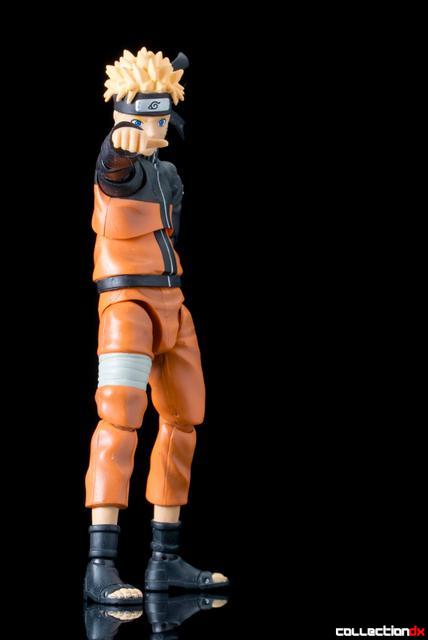 I have pretty mixed feelings about the SHF Uzumaki Naruto. The body proportions and faces just aren’t quite right compared to the animated version yet the figure itself has awesome articulation and a large assortment of hands allow you to recreate most of the poses seen in both the anime and manga. Given how well Bandai has done with DBZ and Sailor Moon and how bad they did with One Piece, it seems like the results are really hit or miss. The lack of a Sage Mode face is also rather disappointing though I wonder if Bandai had hoped for the Naruto figures to sell well and eventually release a Sage mode figure wearing his cool looking coat.

There’s nothing particularly bad or wrong with the figure, but it’s just not quite right when you look at it. This does bring up a weird point at the lack of articulated figures available for the most popular shonen anime and manga. There are only a handful of Naruto/Bleach/One Piece articulated figures with the majority being fixed posed statues. If you want an articulated Naruto figure, this is pretty much your choice for the foreseeable future.