Over the past decade, the market for small, independent “Third Party” toys has exploded. Arguably some of the best “Transformers” being made today are the non-licensed versions emerging from the shadowy depths of the Chinese gray market. The bread and butter of the Third Parties is modern Masterpiece-style interpretations of G1 characters, particularly combiners. But a few more exotic characters occasionally get the deluxe treatment.

Salmoore is DX9’s updated version of classic Gobots/Machine Robo baddie Cy-Kill. While the Gobots never really captured the popular imagination, Cy-Kill’s design was still, in its way, iconic. There was something elementally cool about the character and toy which transcended the Gobots’ lameness. The original 500 series toy holds up remarkably well, though the later deluxe version is a disappointment. Happily, DX9 has given the character the attention it deserves with its exceptional interpretation.

Salmoore is packaged in a heavy cardboard box adorned with wonderful art. I appreciate the deviation from the standard obvious product photos. There’s a real hipster vibe to the illustrations. 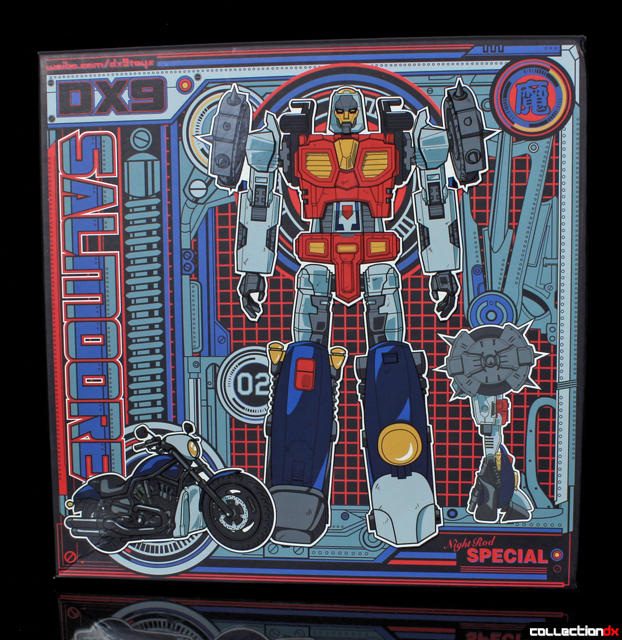 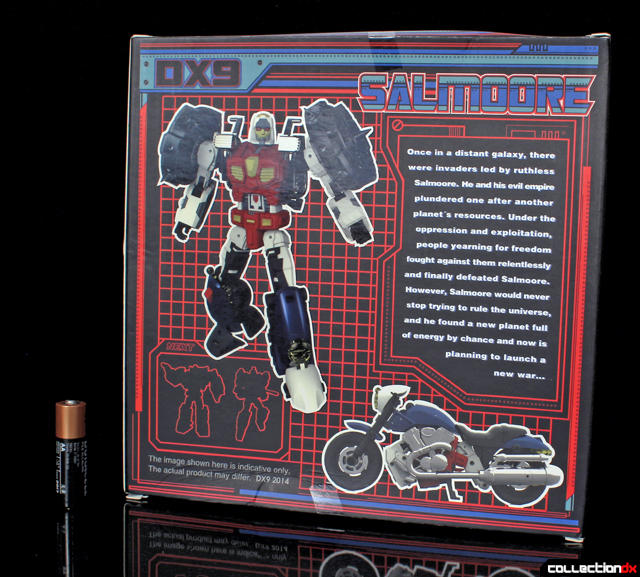 Inside a simple plastic tray. Accessories consist of wheel armor covers and a couple guns/mufflers. Perfectly minimal. Also included are a plastic character card and an instruction sheet. The instructions suffer from dim, confusing photos. 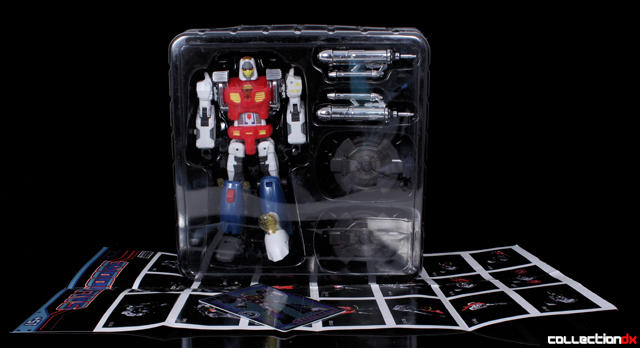 Salmoore is packaged in robot mode, so we’ll start with that. The figure is all dense, sturdy plastic. Paint apps are crisp and thoughtful. A really high-quality hand feel. 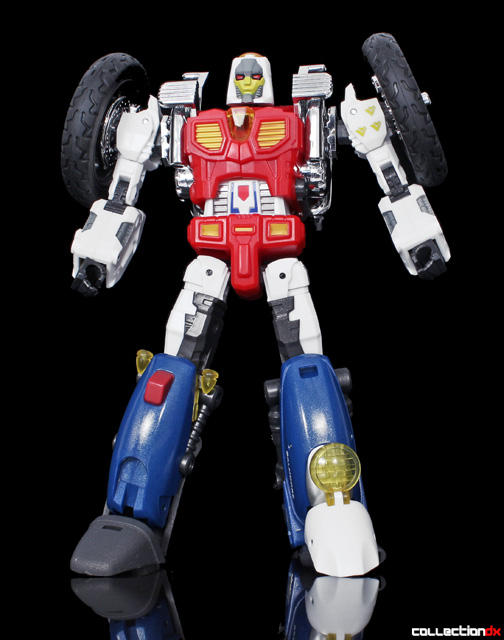 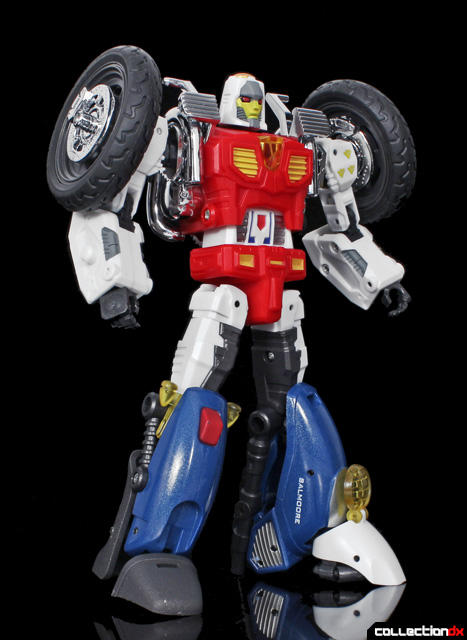 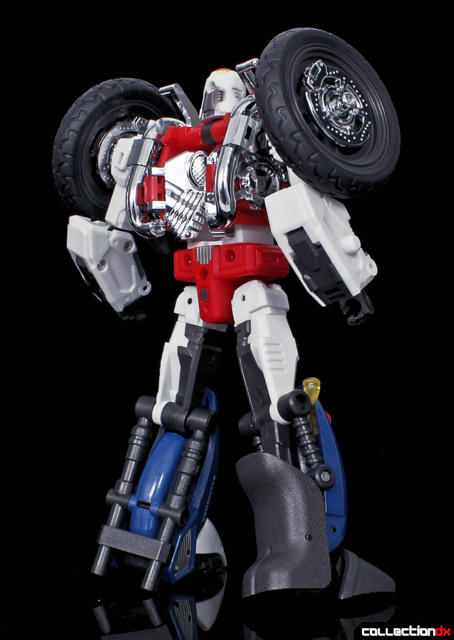 The sculpt is well balanced and the proportions are terrific. The original sculpt was very simple, and it’s fun to see the design elaborated. I think the arms are a missed opportunity, though. The most iconic feature of the original character is that his arms held the front wheel of the motorcycle. By removing this concept and replacing the fork-arms with anonymous blocky arms, some of that unique dna is lost. But the shoulders, with the wheels and the chrome pedals, more than make up for the different arms, which, to be fair, could have ended up looking goofy.

I suspect that the design was left anonymous to facilitate a (recently released) Wreck-Gar repaint. The shoulder armor also screams Wreck-Gar to me.

I prefer the figure sans armor, but it looks good. I like the shiny chrome weapons too. 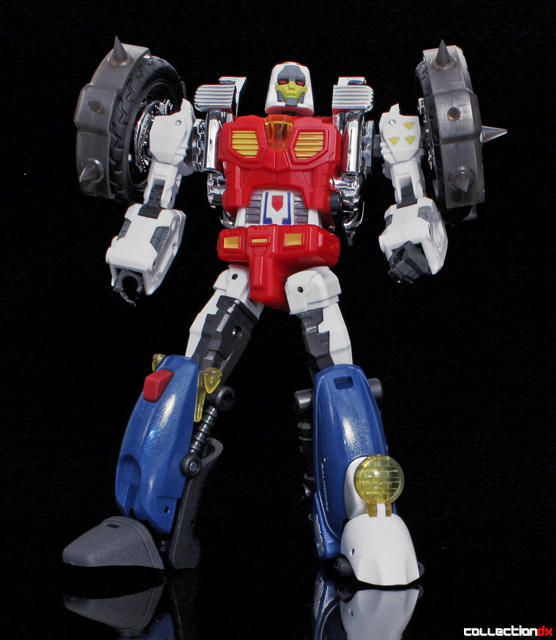 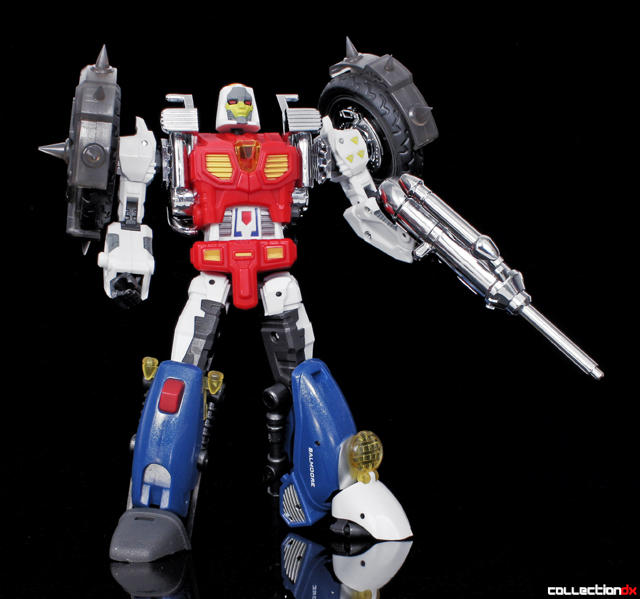 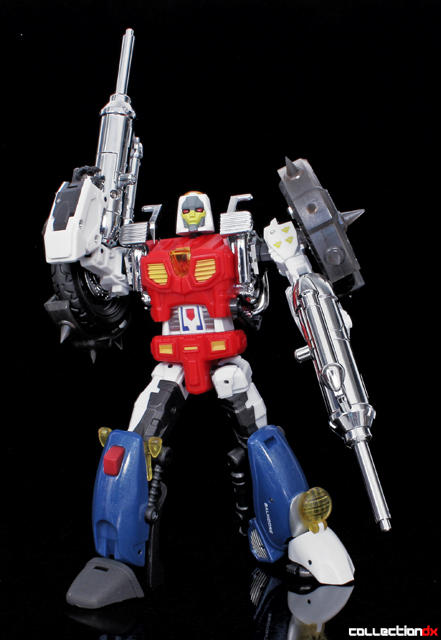 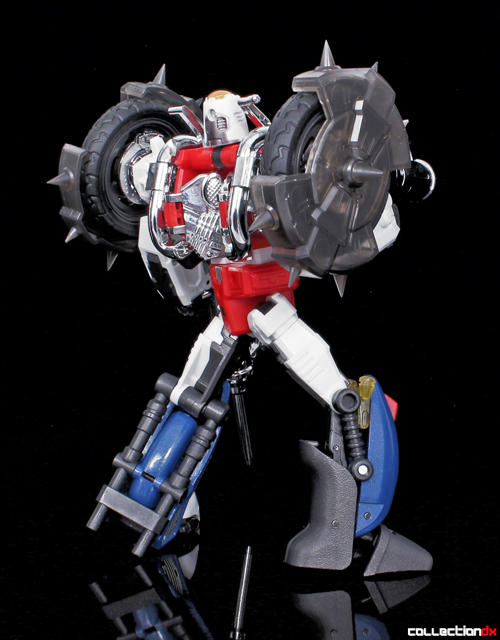 Nevertheless, a great figure. Articulation is buttery and all the joints you’d expect are present, including a waist, double-jointed elbows, and a bicep swivel. You can get a deep knee bend but the hip is limited to ninety degrees. 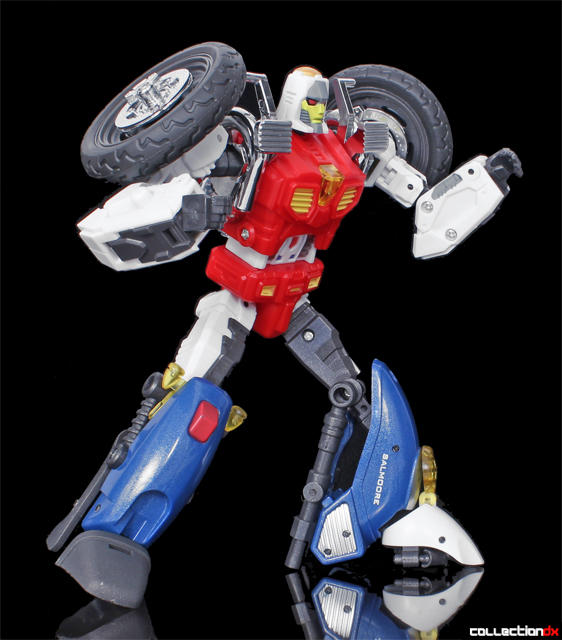 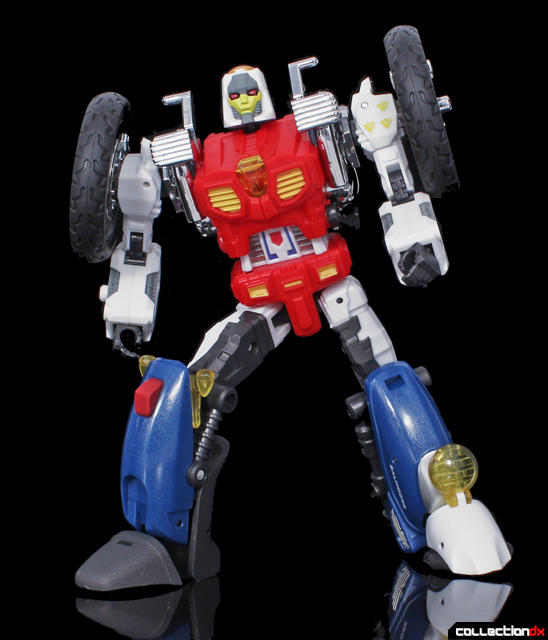 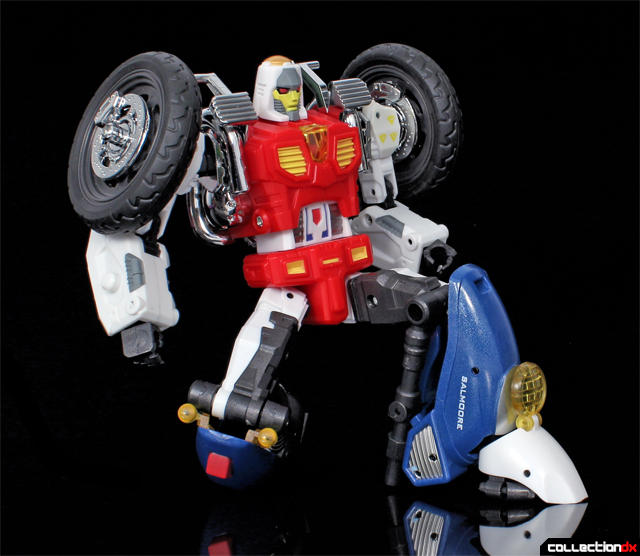 Transformation is fun and engaging. Complicated but not frustrating. The logic is very similar to Habro’s recent Wreck-Gar. The arms and torso fold into the engine block, with the two legs forming the seat/rear and fork/gas tank, respectively. 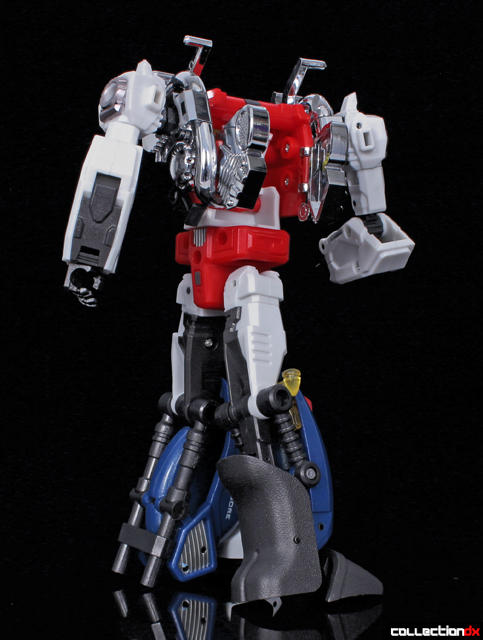 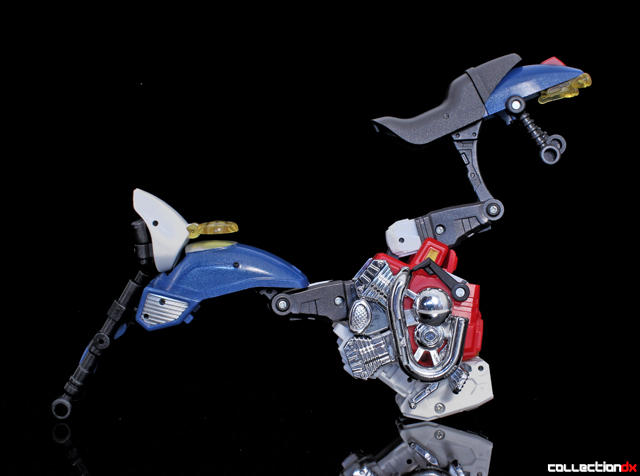 I love transforming motorcycles because the concept is so tricky and challenging to pull off. DX9 has made things easier by taking a cue from the original 500 gobot. By making the wheels remove-able, they’ve sacrificed perfect transformation but made the core process more achievable. It’s a clever, effective choice. 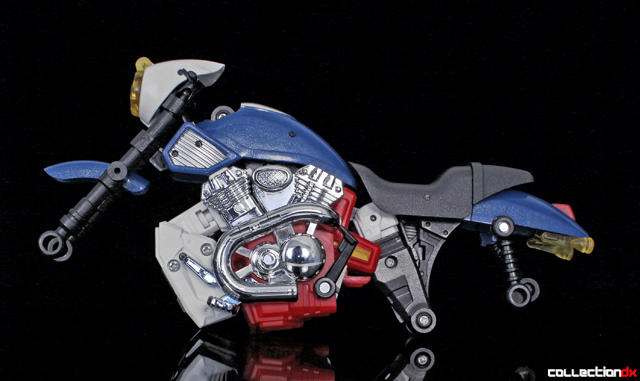 The guns telescope and fit snugly onto the sides of the bike. 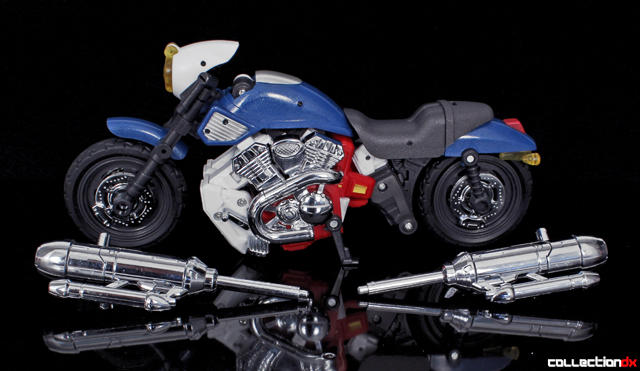 The motorcycle is compact and elegant. Sometimes transforming motorcycles end up being piles of junk with a wheel on the front and back, but this is a proper vehicle mode. Proportions are good, the chrome details pop. 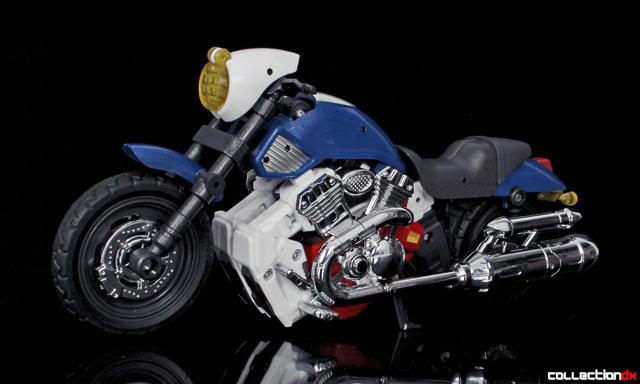 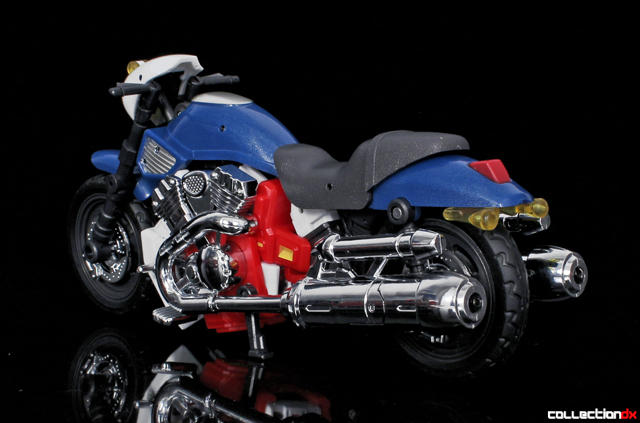 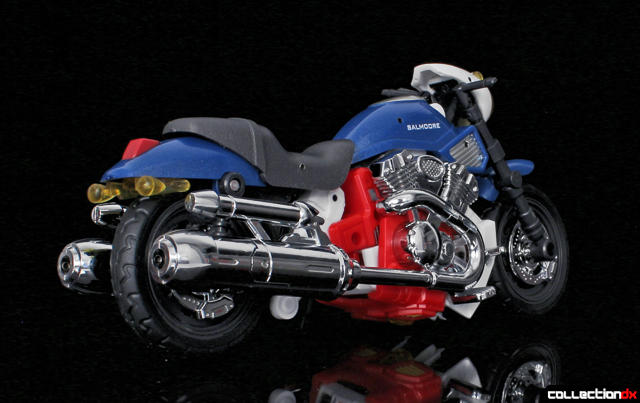 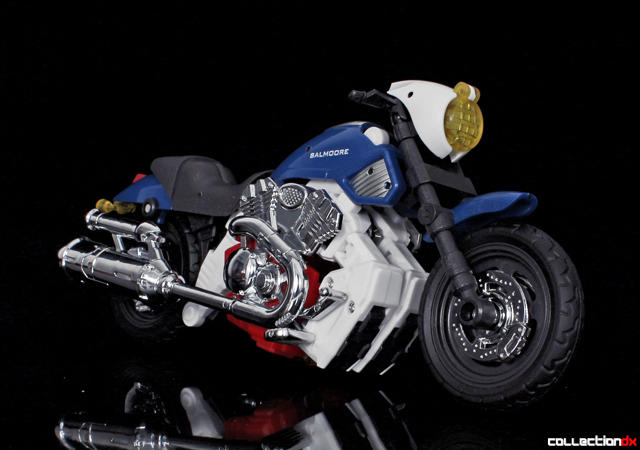 The little handgrips are too loose and often pop off, though. And the headlamp is a little cartoony for my taste. 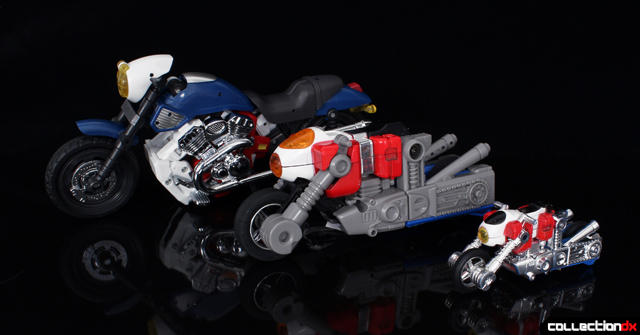 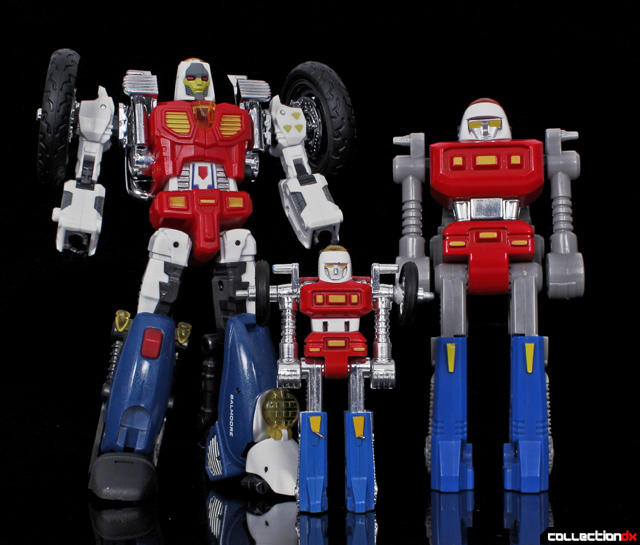 Highly recommended. DX9 has really made something special here. A lovely, fun piece, and a fitting tribute to an underappreciated gem. 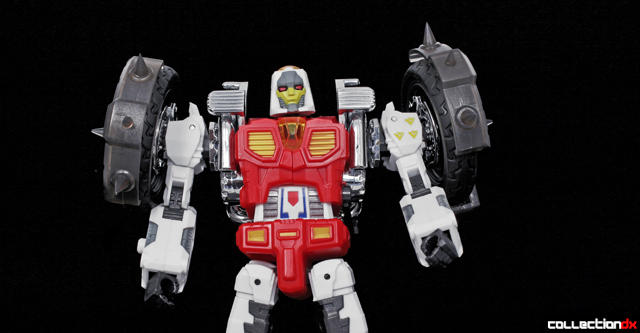 That alt mode is gorgeous.

This a great toy. Glad to see more TF 3rd Party stuff on CDX I think these are some of the most exciting companies making toys right now. I have not had a chance to pick up their Splinter (Wreck-Gar) yet but if you like this box art Splinter's is even better. It's a crazy world that these smaller companies are engineering these incredible toys and getting them out with tight quality control.