"Moon Prism Power, MAKE UP!" - says the tiny anime fan, Quelyn, who does not yet know what anime is!  Sailor Moon will always hold a special place in my heart as one of the first anime I had ever seen.  Sailor Moon (Pretty Guardian Sailor Moon) follows the adventures of Usagi Tsukino, a not so typical female lead.  Silly, clumsy, and not entirely elegant at first, we watch as Usagi transforms into the leader that the Sailor Soldiers need!

Along the way we meet up with many new soldiers that team up with Usagi to protect the world. Sailor Uranus (Haruka Tenou) joins later than a lot of the other main characters, as the seventh Sailor Soldier, but has left a lasting impression on most fans even today.  As a kid, and watching the show through the filter of American censorship, I didn't fully understand the importance of Haruka Tenou.  Haruka breaks a lot of traditional gender roles, and is an openly lesbian character who has a relationship with Sailor Neptune.  She does not mess around and always keeps her cool in a bad situation.  Her critical thinking and strength definitely help the team out of many jams!

For context, this is the second Sailor Moon series figure that I have from this line.  The first one I have is the first release of Sailor Moon, so a lot of my comparisons are between these two in terms of packaging and design.

Needless to say, I'm pretty stoked to be opening this figure and sharing my thoughts.  I've got to start off with the fact that I LOVE the packaging for all the Sailor Moon figures.  I've never really considered displaying anything in box, but I like to stare at this one for a little bit. 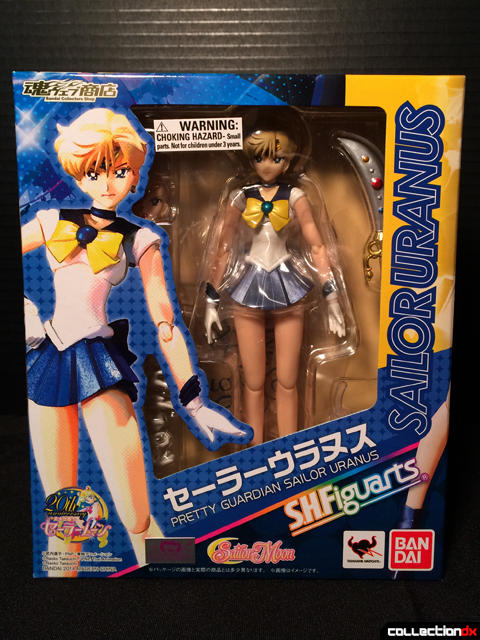 Once you open her up, here's everything that comes in the single-tier tray: 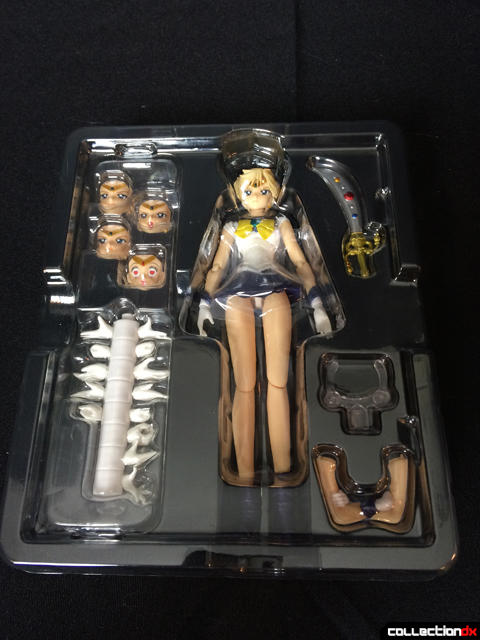 Here's a better look at the parts that come with the figure.  I really like the hand organizer, which you can take apart or leave as one long tower.  This is the first time I've seen this in a S.H. Figuarts release, but I love this concept on my Figma figures.  Included are the following: 1x Weapon, 3x Haruka Faces, 1x Usagi Face, 1x Folded Arms, 13x Extra hands (+2 already on figure, for a total of 15 hands!). 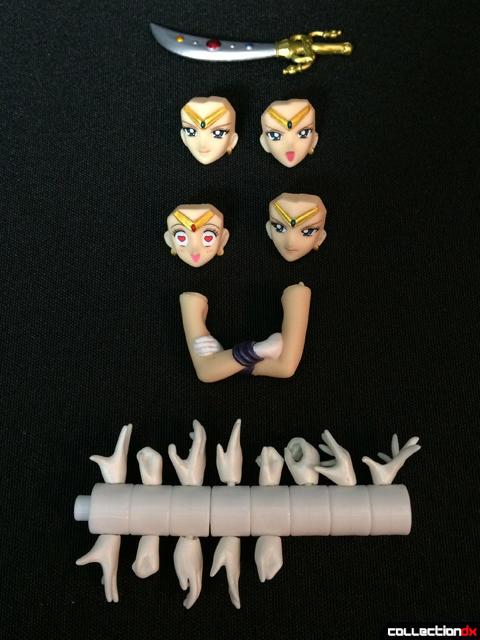 Here is a look at the straight on and side views.  Whenever I see pictures of the figures in this pose I think they look kind of weird.  But fear not, once you pose them they look a LOT better. Here’s the straight on view: 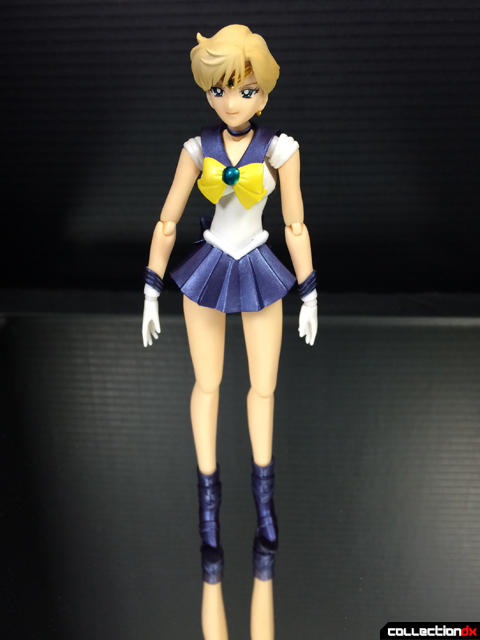 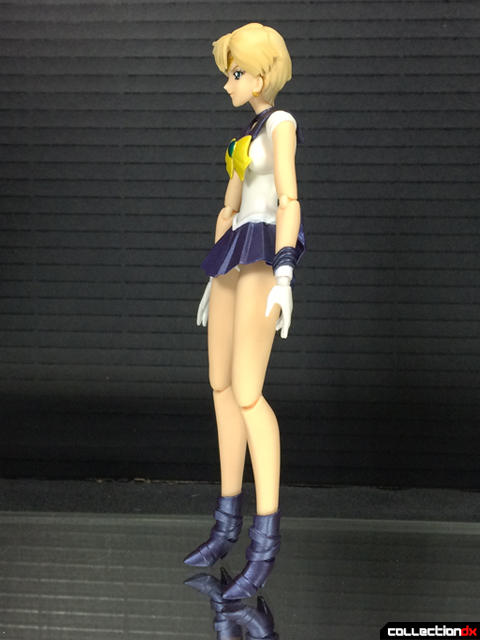 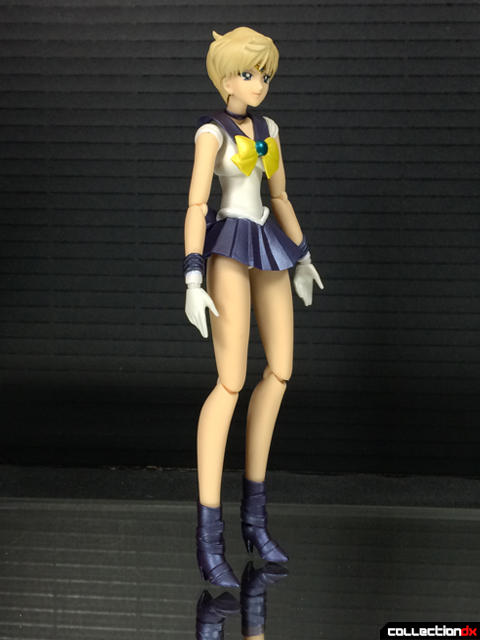 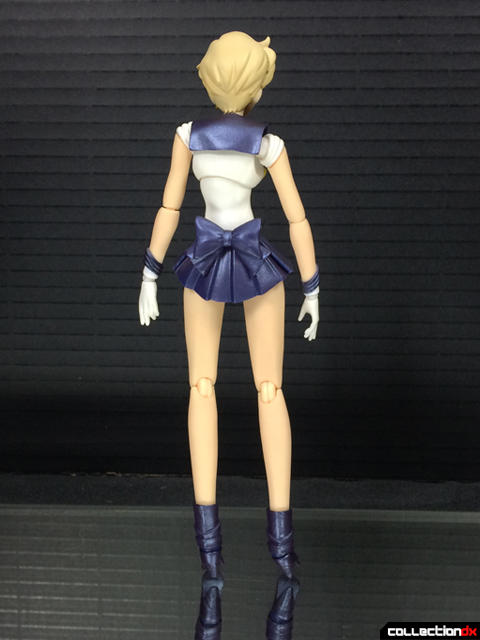 While posing her for these shots I did not want to use a stand so you could see the full figure.  This however was a bit of a hard task.  Her shoes are not only impractical for cardio, but also for standing.  Thankfully Sailor Uranus comes with her very own stand! 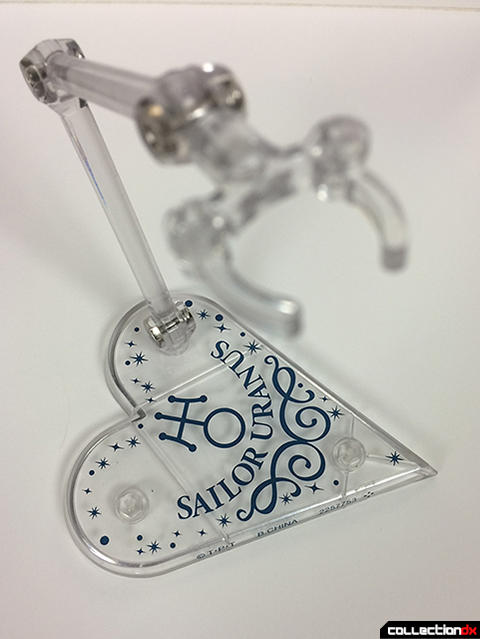 Here is a bow detail shot.  This shot is taken with a macro lens and does not look nearly as bad when just looking at the figure, in regards to the paint apps. 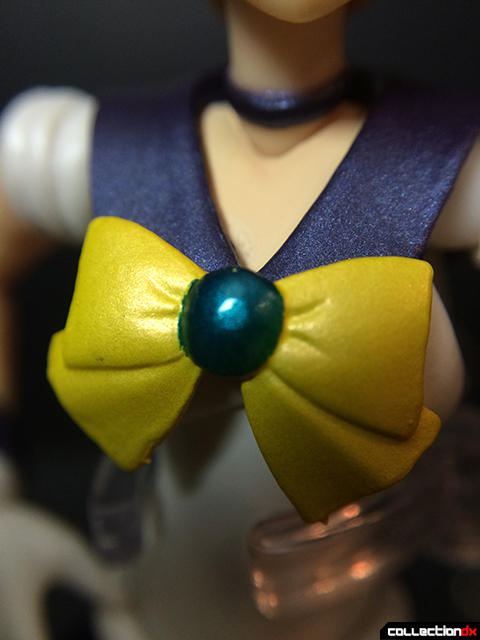 The ability to pose these figures is great! 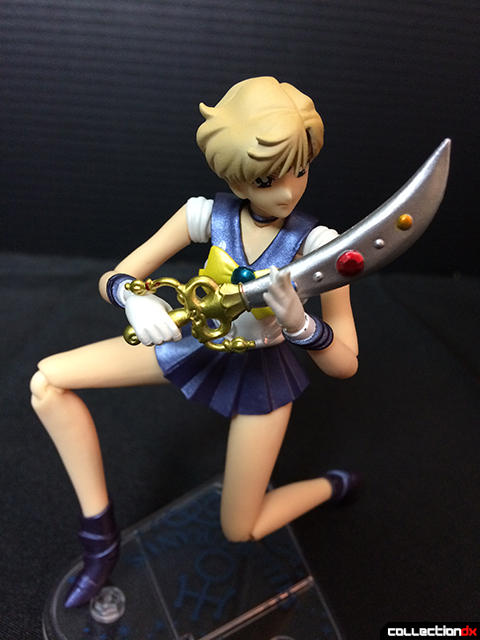 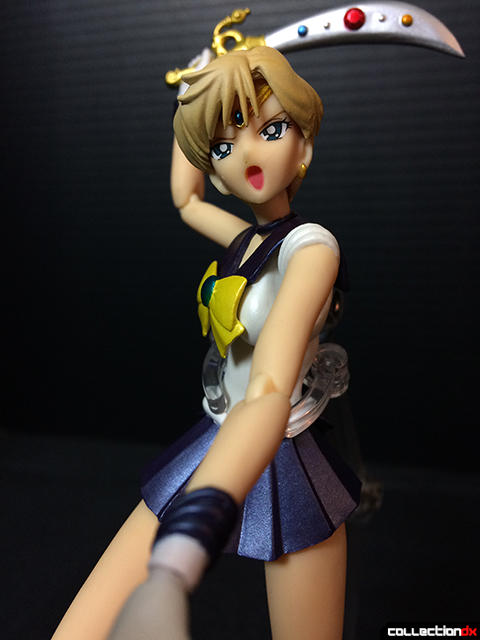 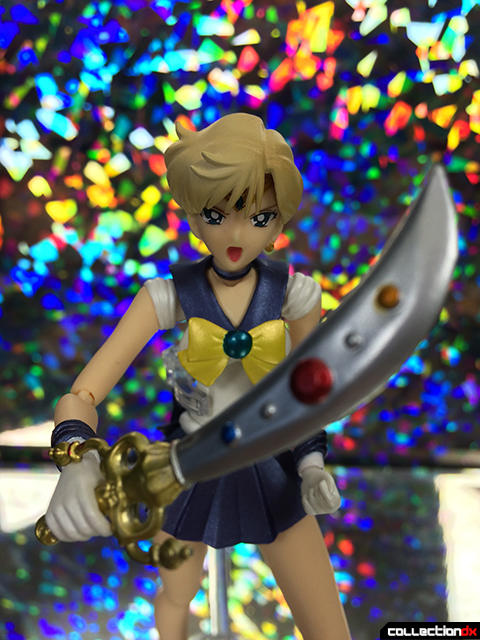 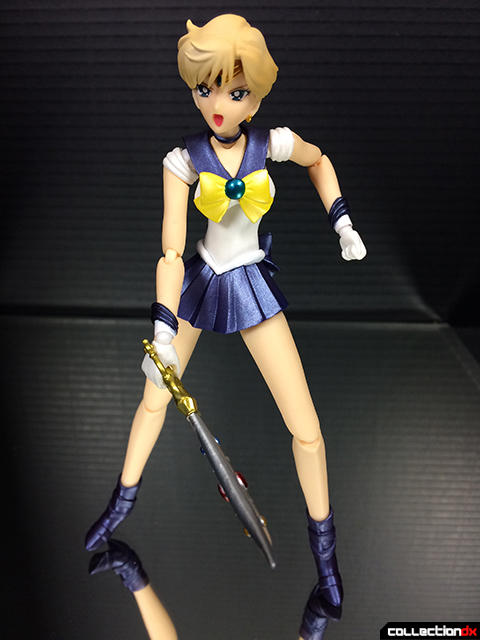 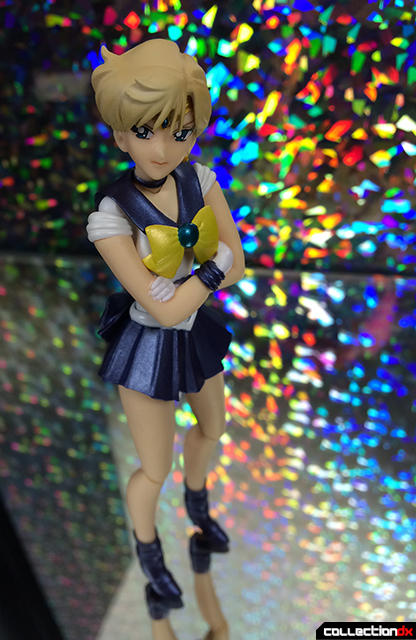 I did notice a few issues with the figure though.  The first one was that there was a flaw on her action face: 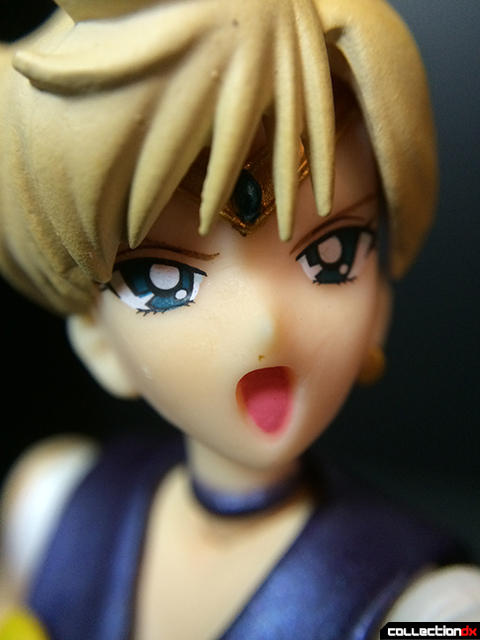 But, I was able to clean that off with a magic eraser and a bit of finesse, you will notice that it’s gone in the later shots.

The other issue I kept having was that her arms are ALWAYS falling off, and the sleeve caps rotating out of position. 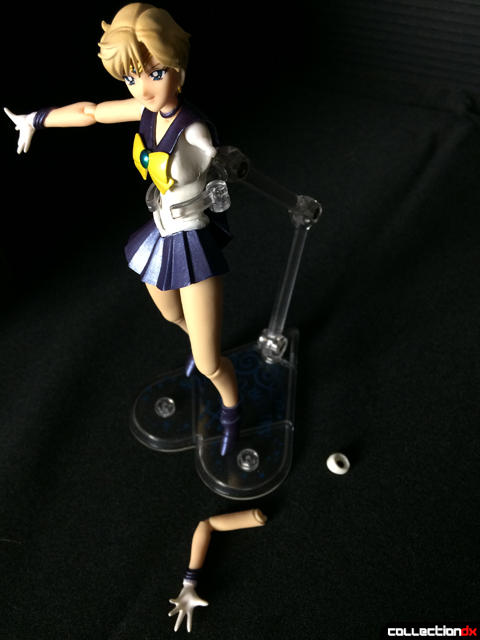 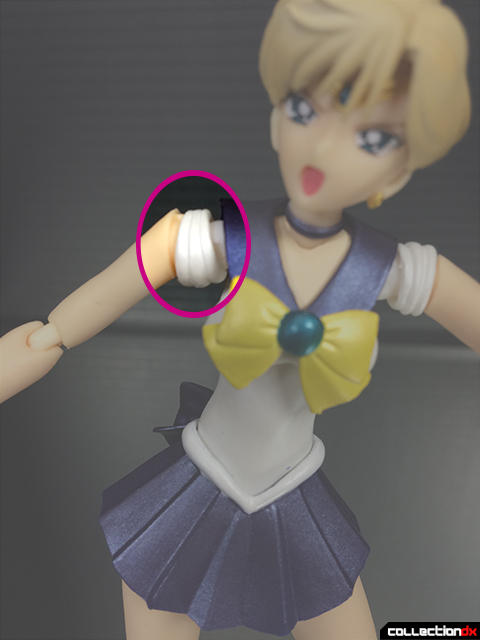 This figure comes with four total faces for Sailor Uranus, there’s not a ton of expression variance.

Neutral and Amused are so very close to each other.  I guess her even keel personality is the reason they decided to include a bonus Usagi face with the character: 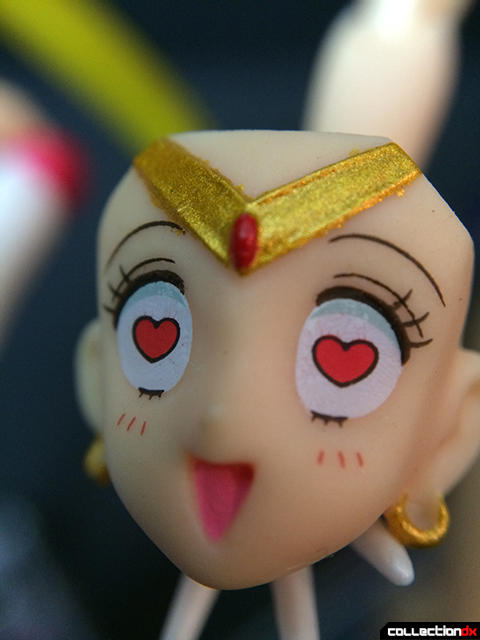 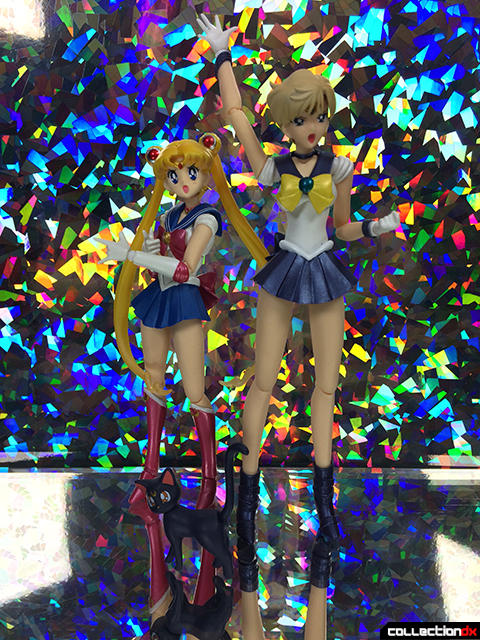 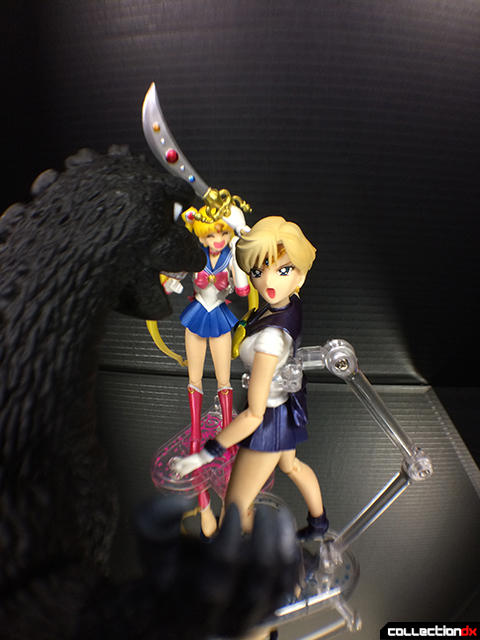 Listen here, you just keep away from us or I’ll punch you right to the moon! 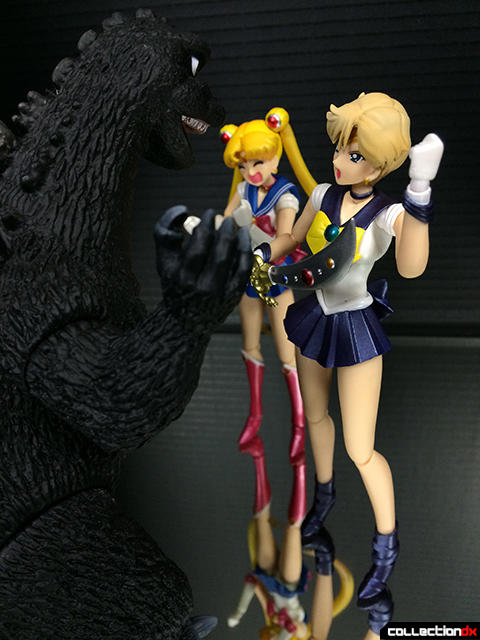 The threat is gone, but Usagi still seems pretty upset… 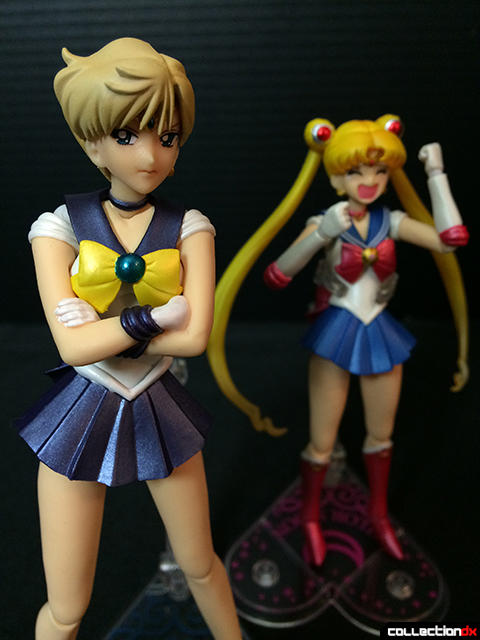 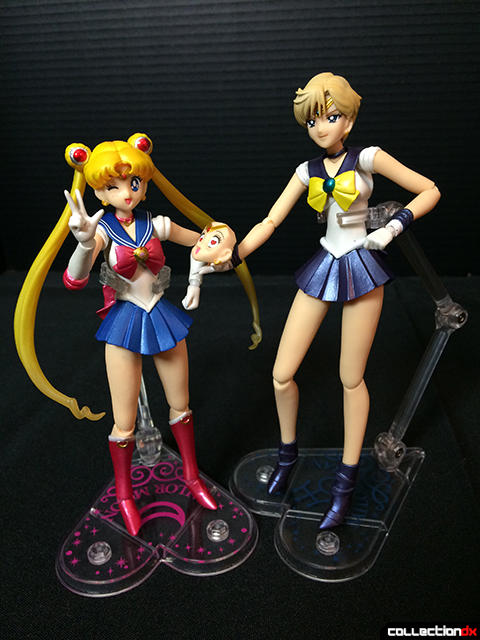 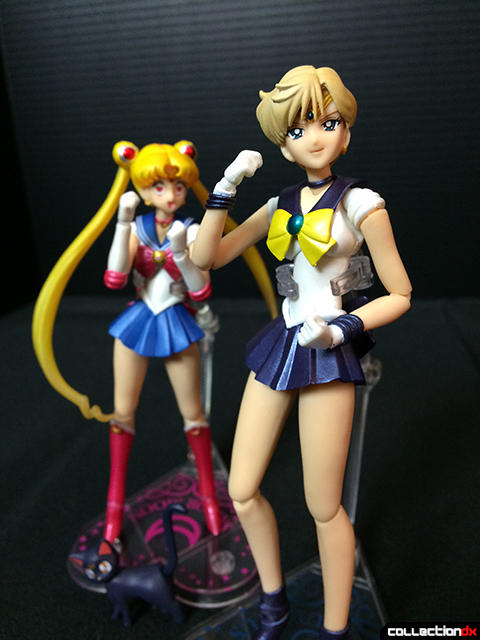 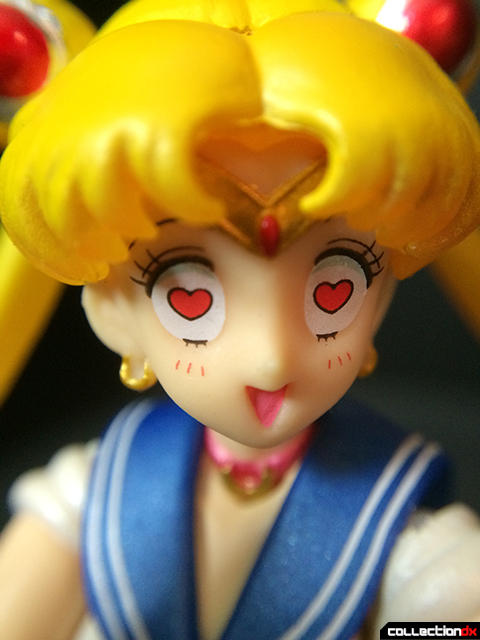 And just a random tip, for those of you that might have a “Daiso” near you.  I get these small plastic containers with dividers, and they are perfect for holding spare parts.  I know some people like to keep them in the box, but I like mine to be more readily accessible for quick shelf-changing action! 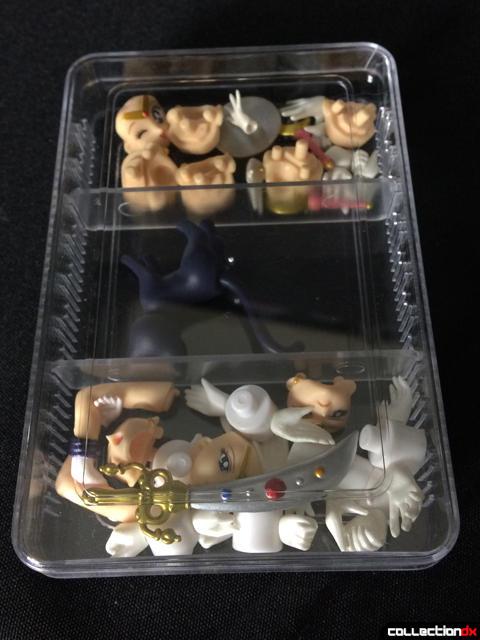 Overall, I’m very excited about this figure and I think she’s a great addition to my collection.  The likeness is great, the hair is great, the posability is great!! Despite a few frustrating arm issues, I would highly recommend this figure to anyone who is a fan of the series.  Now I just need to get my hands on Sailor Neptune!

This is the final pose I decided to put her in.  Firm but fair. 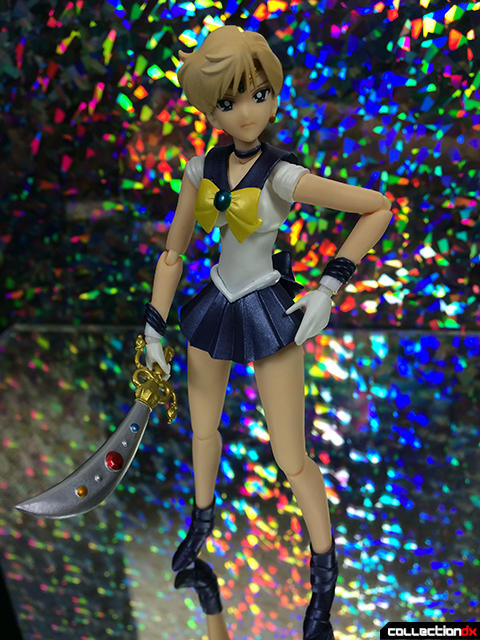 Good first review, already putting some of mine to shame with the use of a mirror and sparkles!

I wish I would have jumped on this for that extra Sailor Moon faceplate. She is easily the most expressive of the Sailor Senshi.

Thanks so much! @SentaiSeiya I definitely checked out your reviews for guidance on my journey into review writing! I didn't know it came with the SM faceplate before I got it, it was a pleasant surprise. I've now officially broken the seal on my Sailor Moon SH Figuarts collection, the slippery slope begins now ^_^

Noooo! They are no longer MIB! Haha.

I am glad that I could help with your review, even if it was in an indirect way.

Oh man, I've never lived the in-box life. I have one figure that is in the box and it's a Naruto Comic Con figure with the goggles. Mostly because the box has a really cool display with lots of clones hanging out.

I might be misremembering this since I don't have any firsthand experience with the line, but I feel like arms falling off SH Figuarts is a occasional defect that has been around for a while, and if that's the case I'm really surprised they haven't fixed it yet.

↑If that's something crazy that I just made up carry on as usual.

I need to play around with more of my figures from other lines. Actually,I want to play around with my Piccolo figure, since he also has folded arms that you can swap out. In my experience the figures where you have to change the arms, this happens more frequently. I think that happens to some degree on all figures though, when you pose them frequently or swap things frequently, they get easier to remove.

However, on Uranus, it did seem a bit more precarious than Sailor Moon, and I was posing both of them a lot for this review.