Note: check out our interview with the man behind Toyfinity, John Kent, here.

Robo Force is a beloved but misbegotten footnote in the eighties fantasy-and-technology toy explosion. As a child of the era and lover of obscurity, I’ve long admired Robo Force, but I’ve always considered the designs merely quaint. There was a certain half-formed potential, but it was difficult to discern amid the suction cups and springy arms. Toyfinity not only saw the possibilities, but has made them real, and in spectacular fashion.

The latest wave of figures was just released, consisting of Wrecker and Sentiinel. 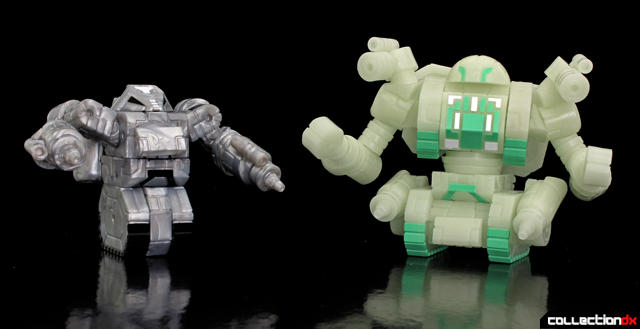 Wrecker is Toyfinity's first DX-style toy. featuring more parts, more complexity, and Glow In The Dark PVC. The scale and finish of the figure are lavish. 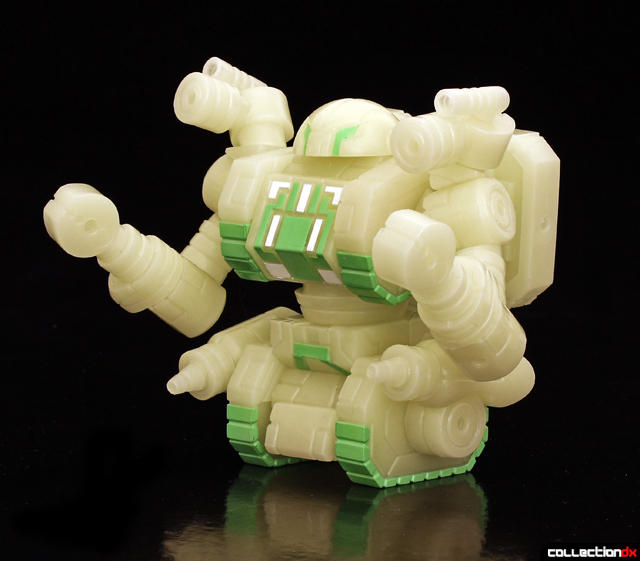 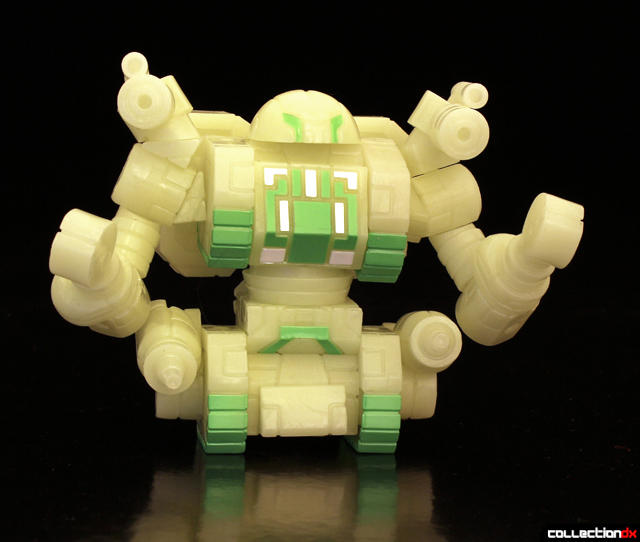 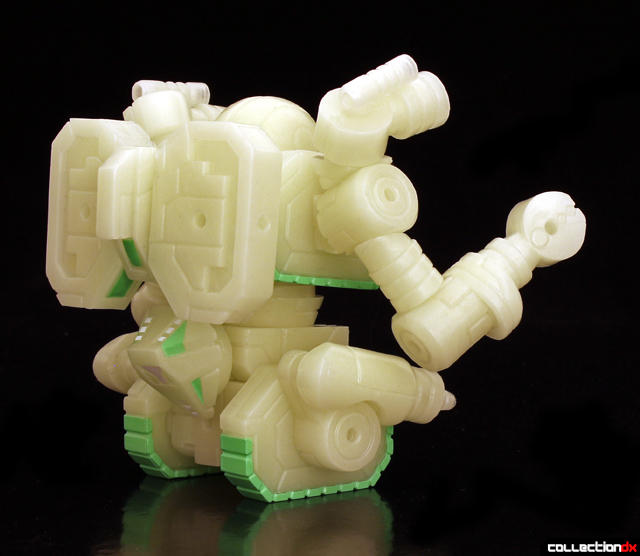 It’s hard to tell from the varied modes, but all of the Robo Force characters utilize the same kit of parts. The Wrecker build uses nearly two kits. 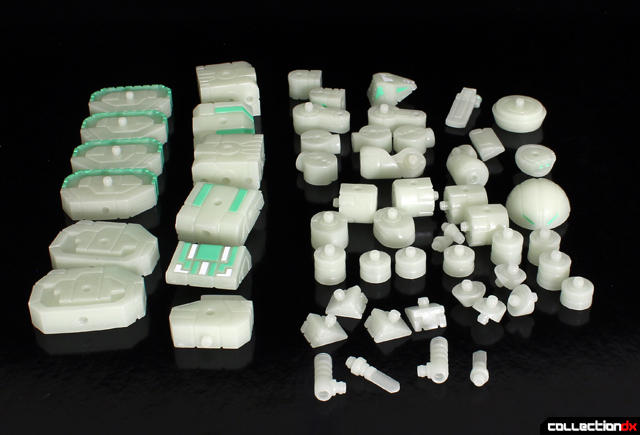 Wrecker is more of a loose interpretation of his earlier incarnation. Whereas the original has a goofy, innocent charm, the new Wrecker is all angular menace.

The GITD PVC is bright and vivid. The pale green and white paint applications lend a Tron-like air to the deco. 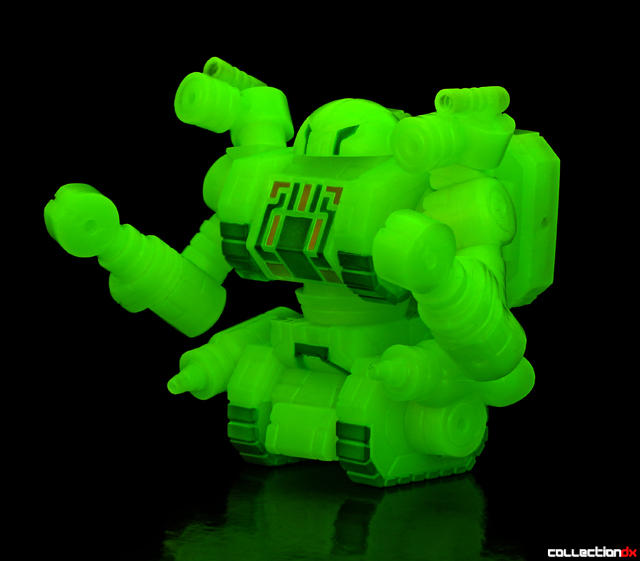 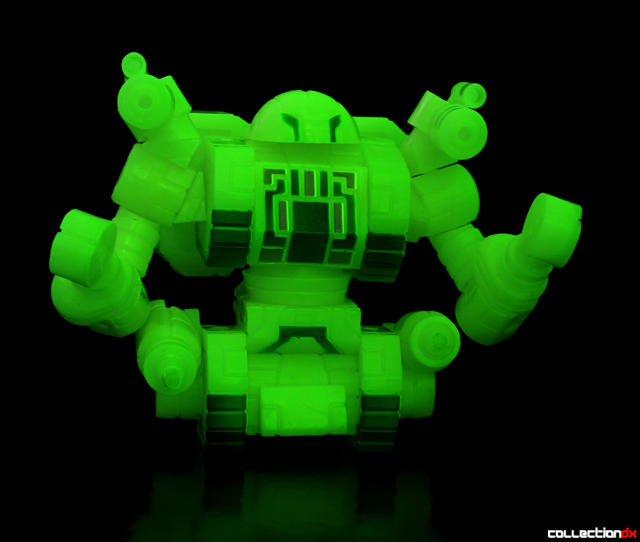 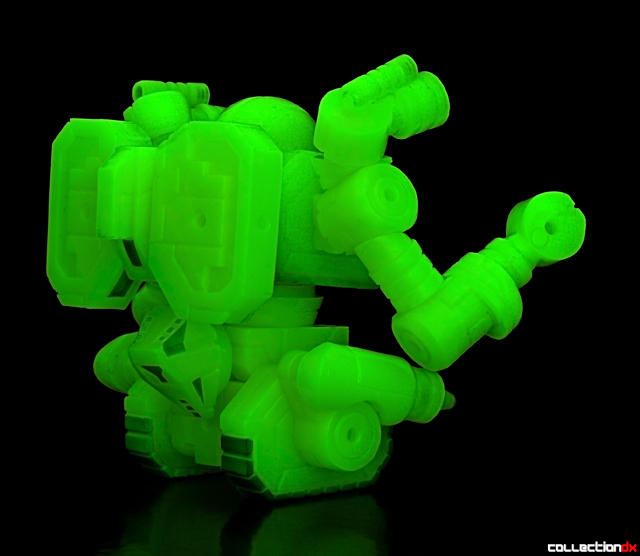 If you weren’t able to get in on this release, you can always build one out of other kits. 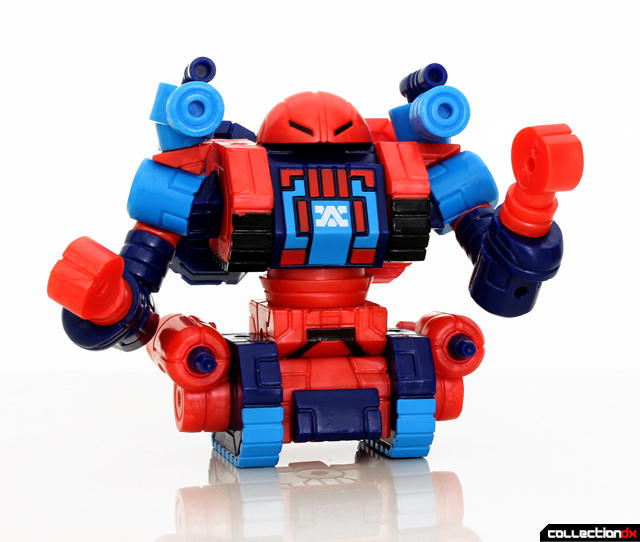 You can likewise build other characters in the series. 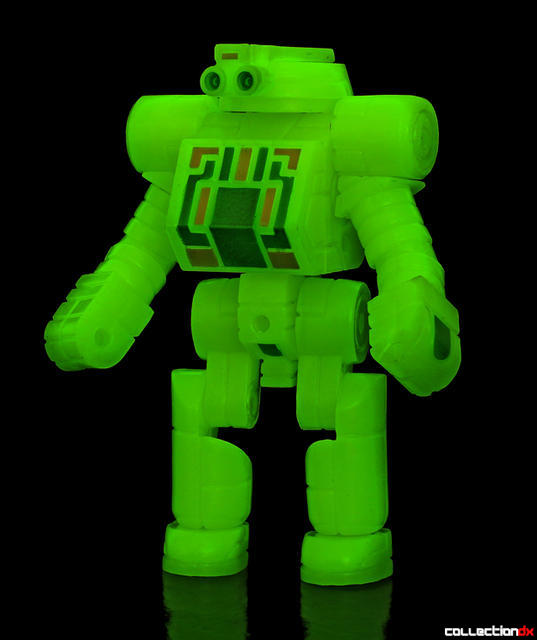 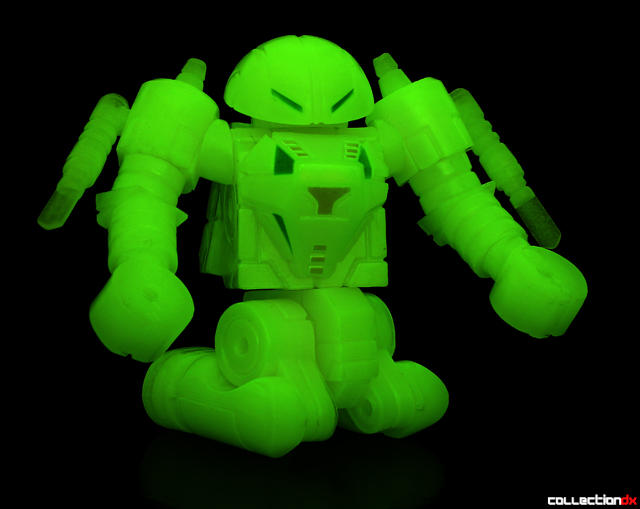 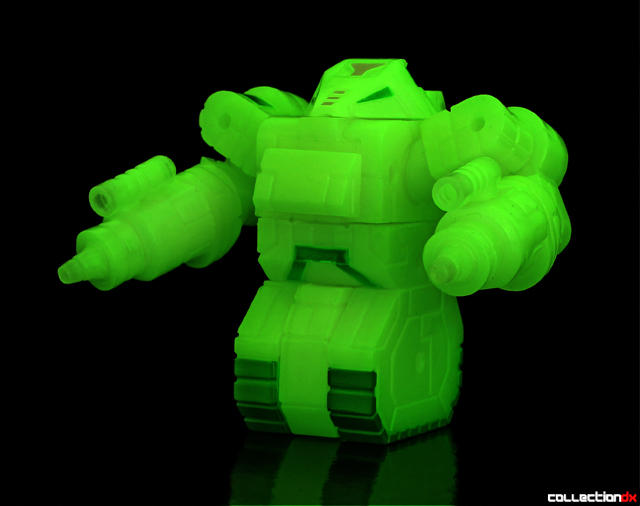 The super-sized part count allow for all kinds of fanmode fun. 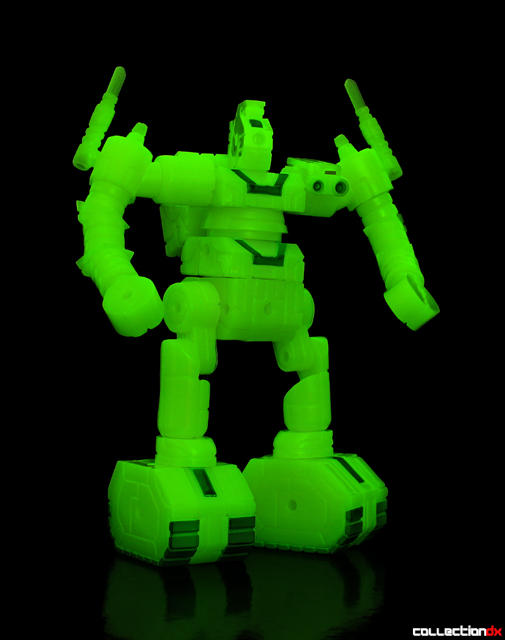 I'm quite taken with my (loosely) T-Bob inspired Outlander Segway. 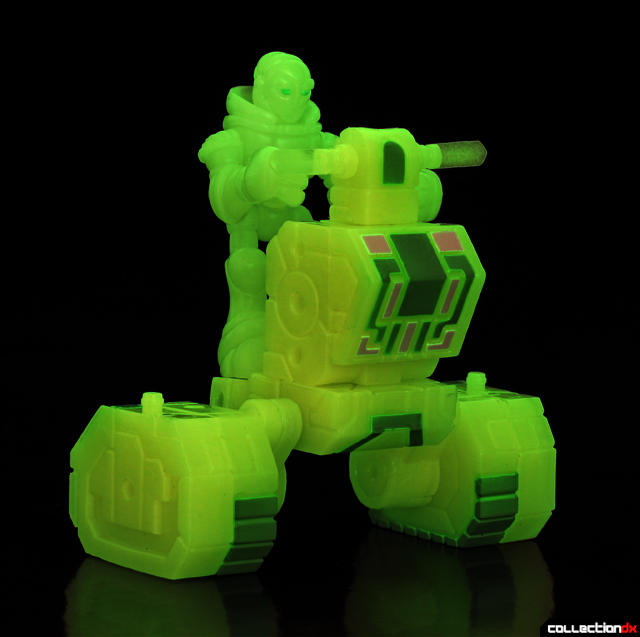 Sentinel is a standard release, cast in a gorgeous swirled metallic gray PVC. 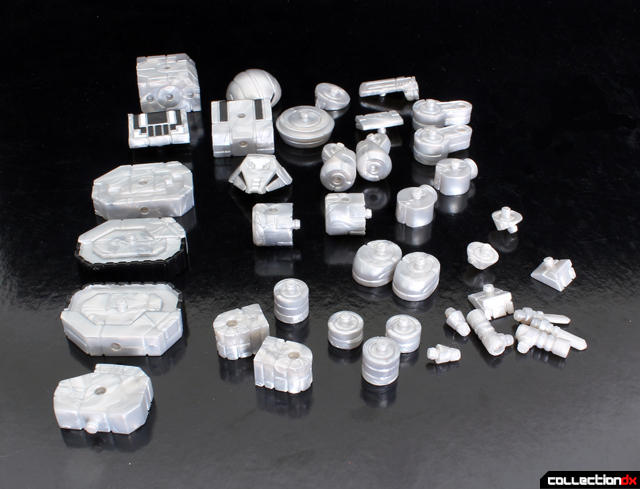 Recent Glyos releases have used this material to great effect. Each piece is unique, and the rich texture lends the pieces real shelf presence.

As with other Robo Force releases, the same kit of parts is reconfigured to create a unique character. Sentinel nicely evokes the character of the original, while markedly improving upon its proportions and articulation. 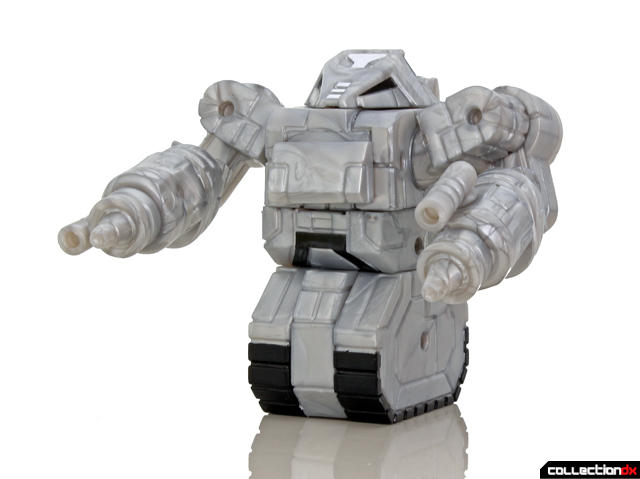 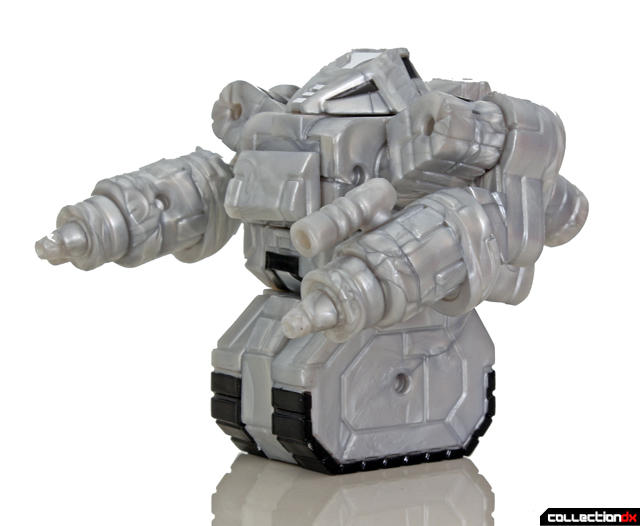 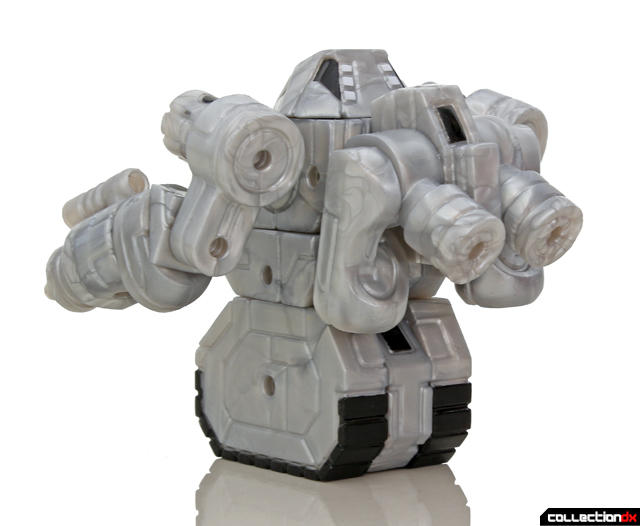 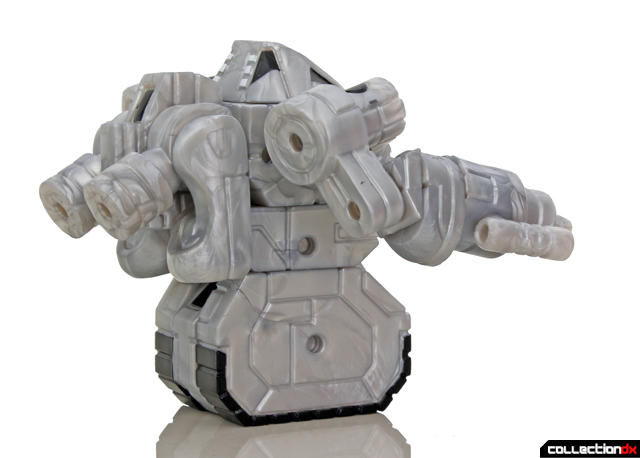 I like the innovative shoulder design. Sentinel can hold his guns sideways to look cool. 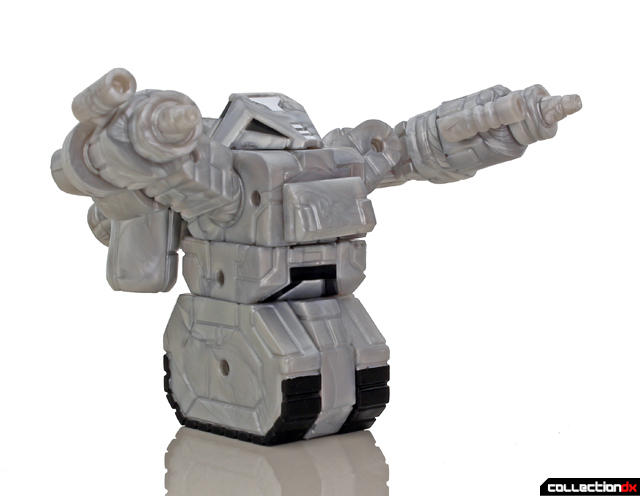 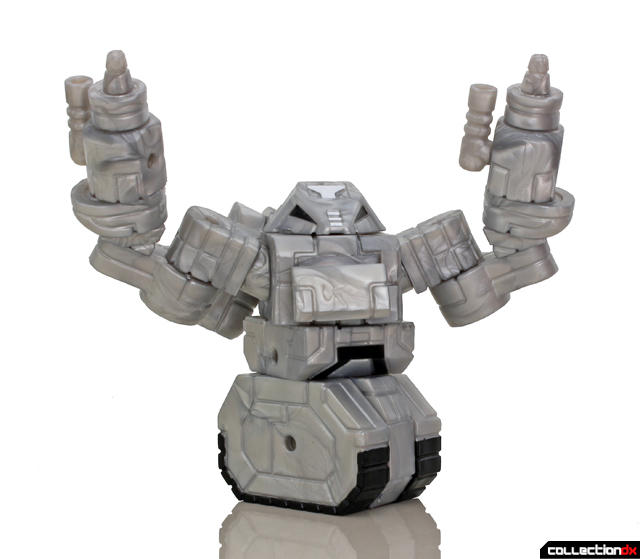 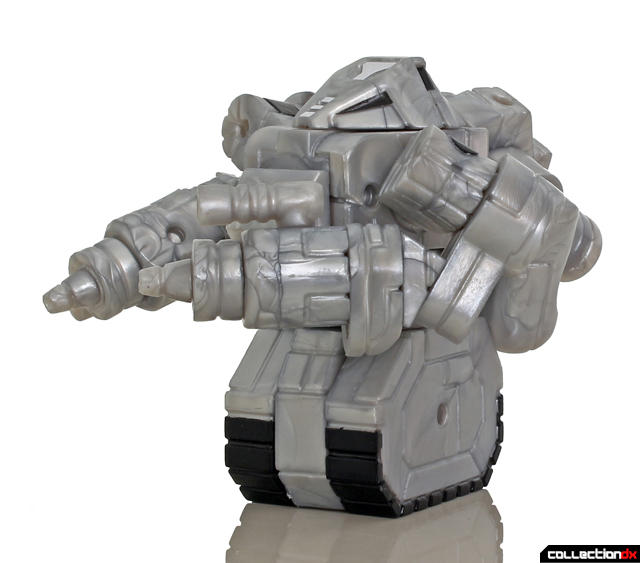 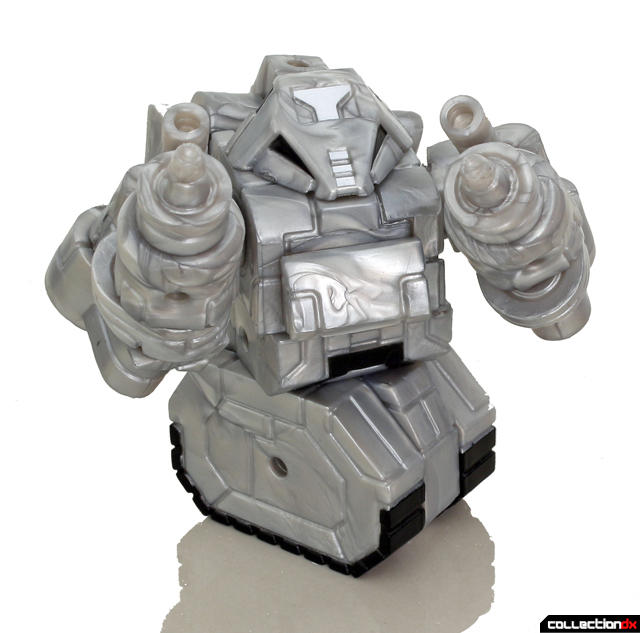 And of course you can build all the other characters. 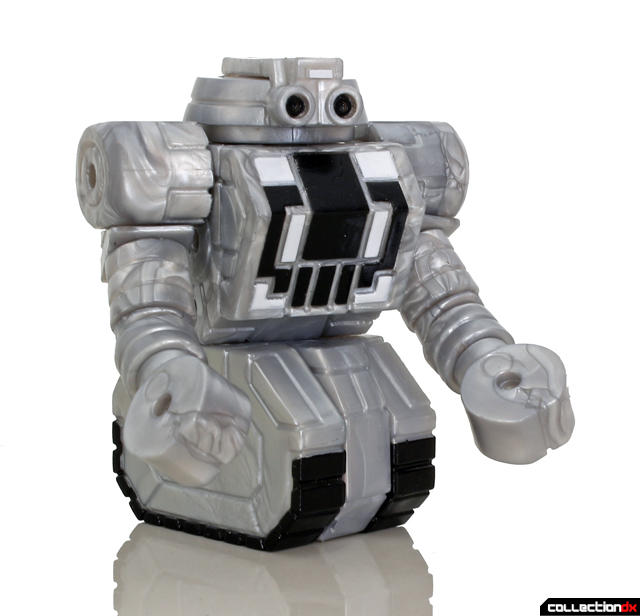 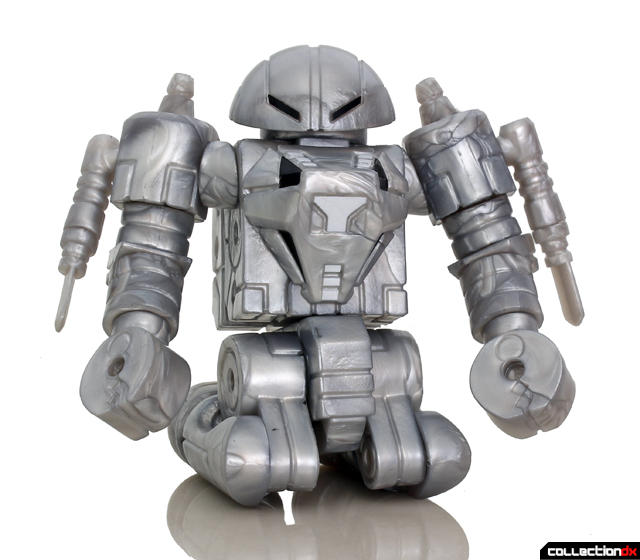 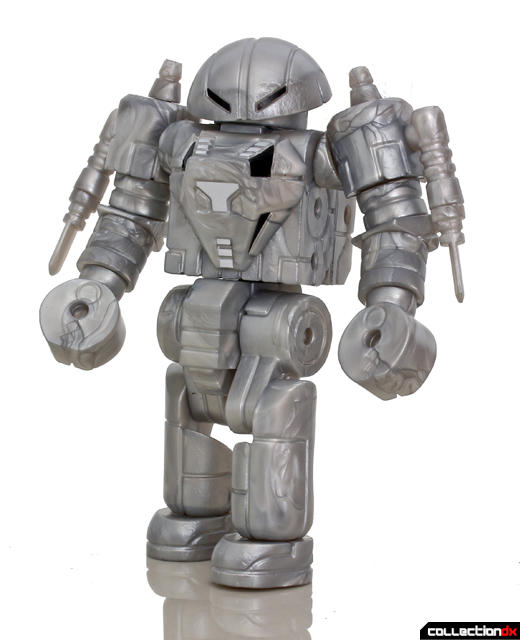 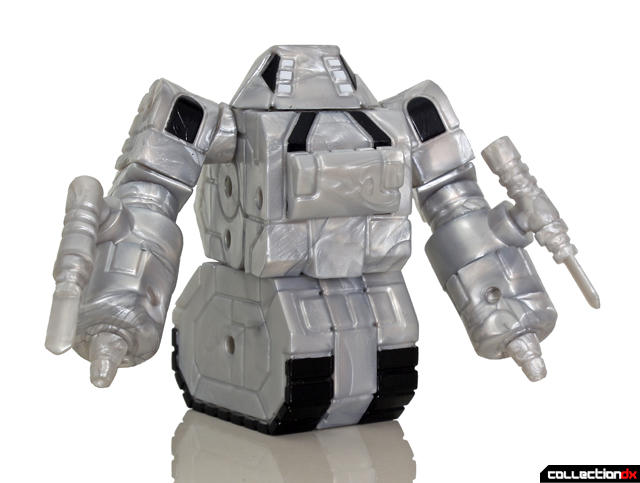 I've really gotten into actually playing with these things (imagine that!). Once you've re-built the set into different characters, the possibilities become more intuitive. I find the mechanical building blocks more engaging that the organic Glyos parts. My mind just fits better with the more robotic vocabulary. 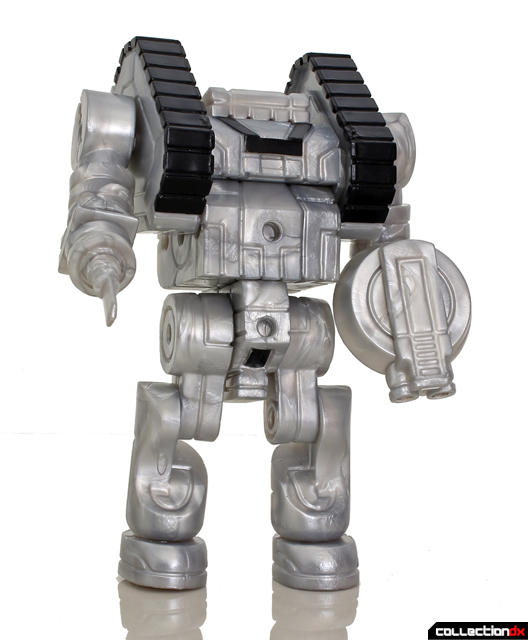 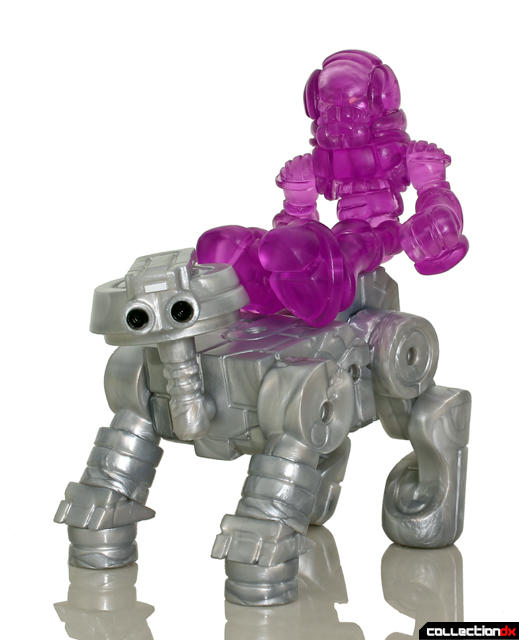 Sentinel cross-breeds successfully with this Weaponeer of Monkaa. 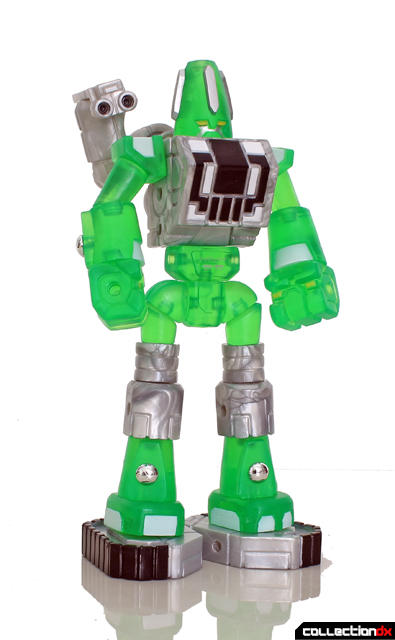 Toyfinity has delivered another fantastic wave of toys. I look forward to populating my shelves with more Robo Force and mutant toys of my own creation.

While these have been selling out quickly, be vigilant, as more waves are on their way. If these appeal to you, visit Toyfinity's site and Onell's blog. Future waves are usually noted at least a few weeks in advance. If you plan on purchasing the day of release, you stand a good chance of getting product before it's sold out.

5 comments posted
How do you take GIDT pictures

How do you take GIDT pictures with a camera? I can never get it to work for me.

Photographing glowing toys is a real pain in the neck. At least it was for me. The photos I posted took hours and hours to produce, and I'm still not completely happy with them. I also cheated a little. The main points:

1. You need to 'charge' the particles with a black light, ideally positioned identically to your camera view. 5-10 minutes works well enough.
2. Turn off all lights and photograph quickly, because the glow will immediately start to fade.
3. My best results were from manual camera settings, with mid-range ISO (400), mid-range Aperture (F9-11), and long exposure time (30 seconds). Trial and error is key, though.
4. This will yield a good glow picture, but you lose a lot of the definition of the parts.
5. I cheated by also photographing the toy at regular light, then blending the two pictures in photoshop to show both the detail and the glow.

There are a few decent articles online if you google 'glow in the dark photography.'

I missed this! Now they're sold out of Wreckers! I forgot to check the Robo Force website. I only remembered when I checked this website. I might get a Sentinel though. Does anyone have an extra Wrecker for sale?

Could you build Wrecker from 2 Sentinel figures, because if I can't get Wrecker, I'll build one with 2 Sentinels....