Optimus EX Prime comes from the very, very Japanese anime, Triple Combination: Transformers Go! It's quite different from what most of us come to recognize as Transformers. The show takes place after season 2 of Transformers: Prime. There is a season three, but it is completely ignored in this continuity and as of yet not shown in Japan.

Optimus EX Prime comes in a very, very Japanese box that can be seen in the video review.

I was half expecting Optimus to come out of the box in robot mode, but instead we get him in his bullet train alternate mode. 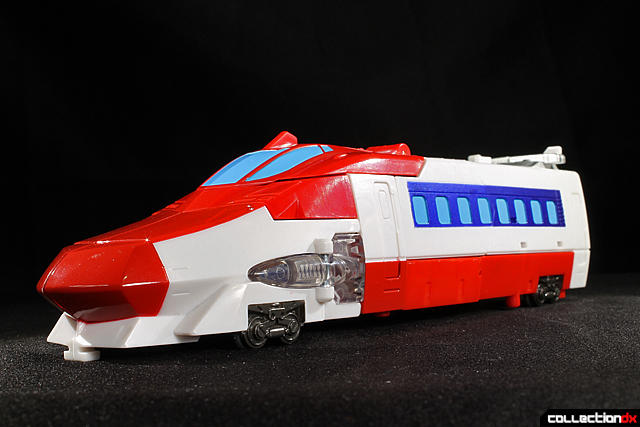 While the train mode looks decent and cartoony, the rear really suffers. There are no panels to hide the big opening out back. 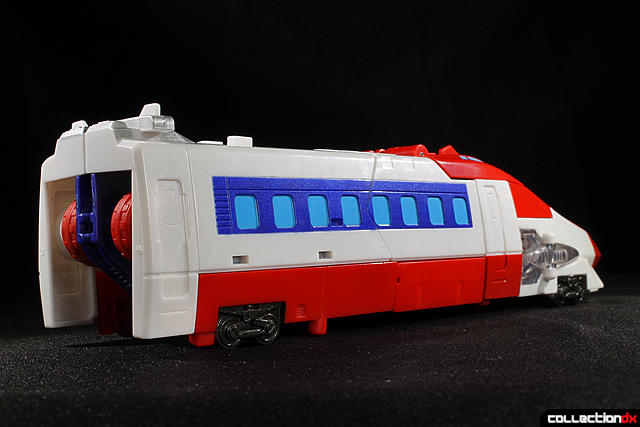 After adding some AAA batteries which you supply yourself, you can check out the light and sound gimmicks. I tried searching online for a translation of the Japanese-only phrases but no luck. Actually he does yell out "Transform!" and "Gattai" which I do understand. Gattai? yeah there is some combiner action with this guy. More on that later. Hitting the Autobot logo-laden button on the top of the cab lets you hear the phrases while LEDs flash on the clear section of the train. 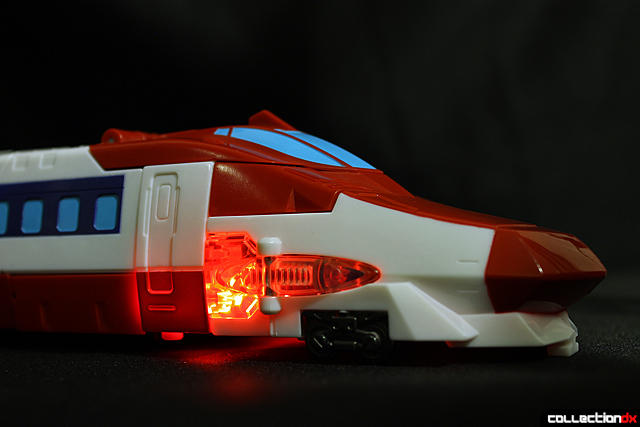 Holding down the button activates a bluish LED and a catchy "choo choo train" type song that seems to go on forever...or at least until you hit the button again. 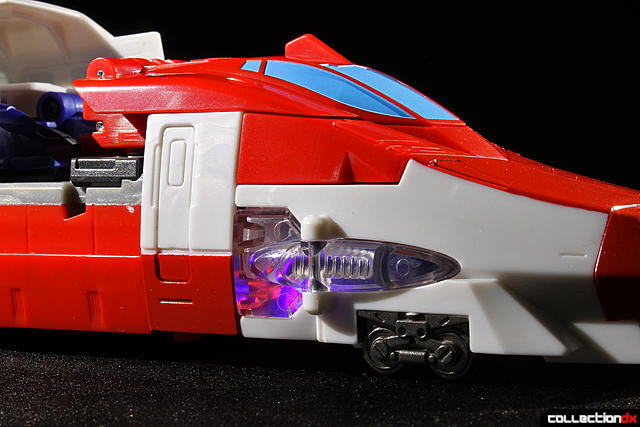 Included with the set are two Kabutos. Not Koji Kabutos, but Kabutos which are Japanese helmets. More on the helmet part later. When not doing duty as helmets, they combine into a sort of insanely crazy thing that attaches to the back of the train. The whole process of combining the two Kabutos and then attaching to the train doesn't quite have the feel I think it should have. It would definitely frustrate a young child. 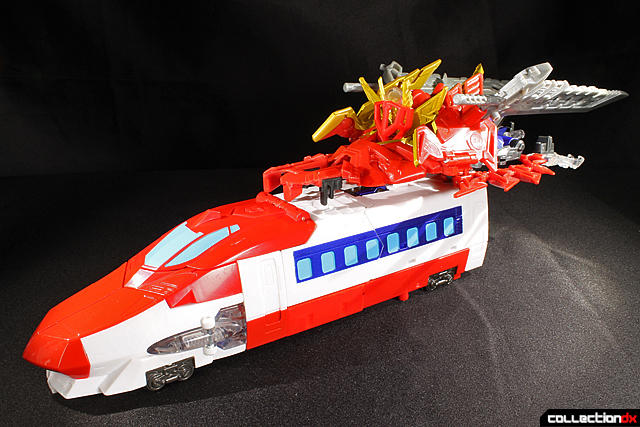 Normally I would go into robot mode here, but he actually has another alternate mode. A Beast mode. In this case a colorful Japanese Dragon. A couple of clicks here, a couple of flips there gets you into Dragon mode. It's not the prettiest thing out there, but it works. 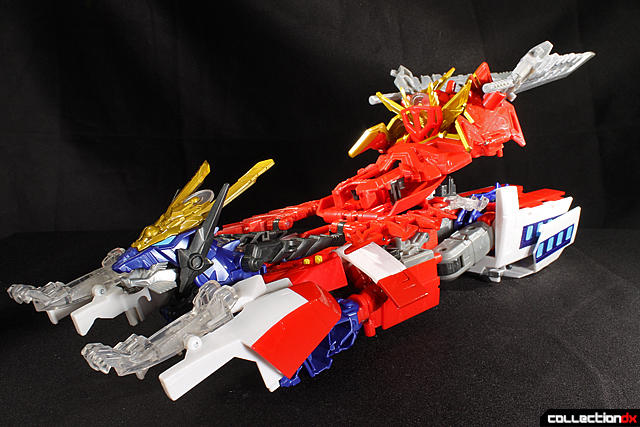 One Kabuto goes out back to form the tail end and one goes up front to form the Dragon head. 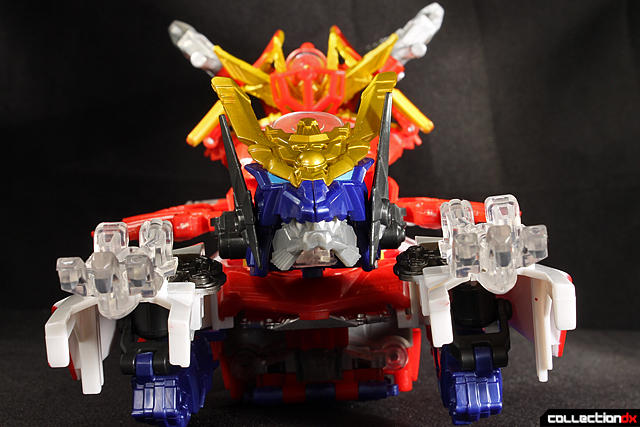 Most likely the next thing you will want to do after playing with Dragon mode, which by the way is not the most secure mode Kabuto-wise, is to transform into Optimus EX Prime. It's a fairly straight-forward transformation. The end result is actually pretty good considering all it does. If I had to point out something I would change, it would be the blue apron covering it's crotch. Looks mistransformed but I assure you that's how it is. 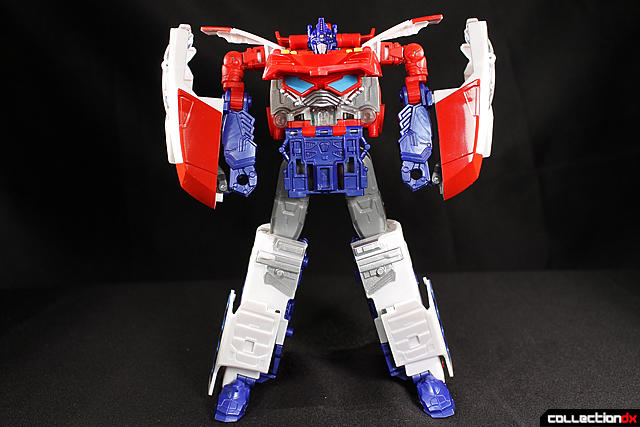 The back however suffers from dare-I-say-it...kibble. Kibble of the train variety. Most of the figures weight is concentrated in this area. In spite of this, the figure remains fairly stable thanks to the longish heels. 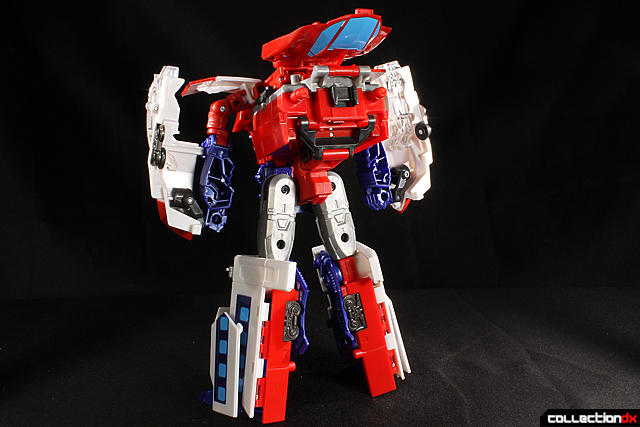 It is unmistakeably Optimus Prime. Even the chest windows are done here to make sure no one mistakens him for any other robot. 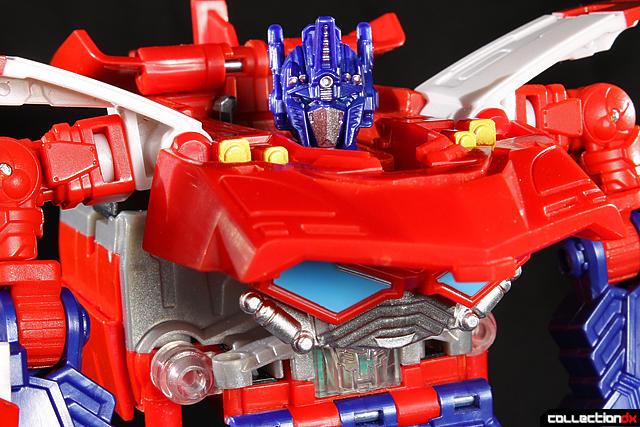 Articulation is decent for this figure and rather stable considering it's heavy back/shoulder area. Ratcheted hips and knees make sure stability is not much of an issue and very welcome. 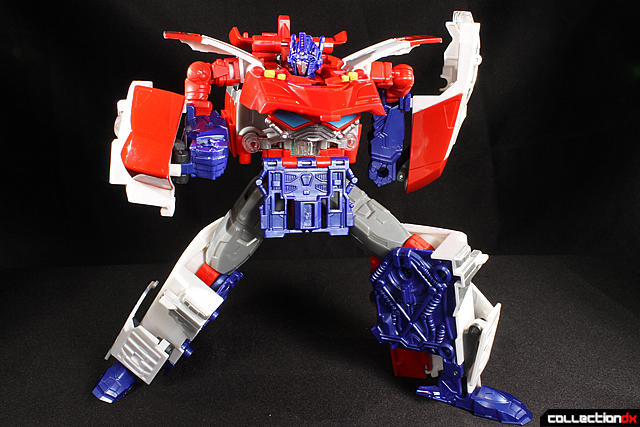 Like all the other modes, the LED/Sound feature can be used. I really like it in this mode. To activate, simply press the clear Autobot logo on his belly. 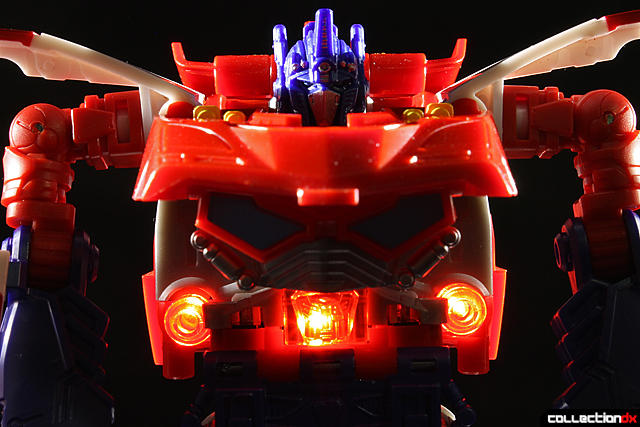 What about the Kabutos you ask? Well don't get your panties all in a bunch because robot mode puts them to good use. You can combine them to make the craziest shield ever... 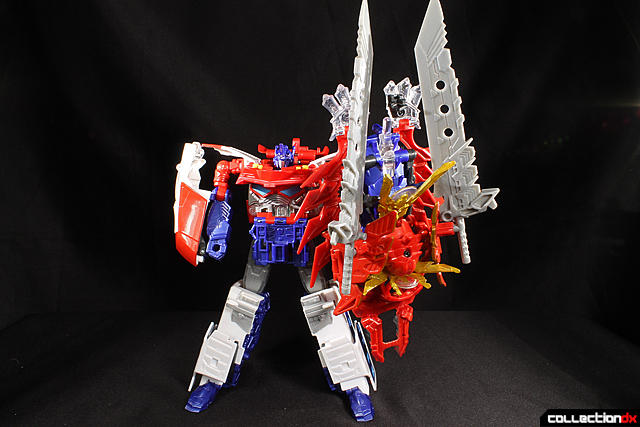 ...and also remove the blades to use them as swords! 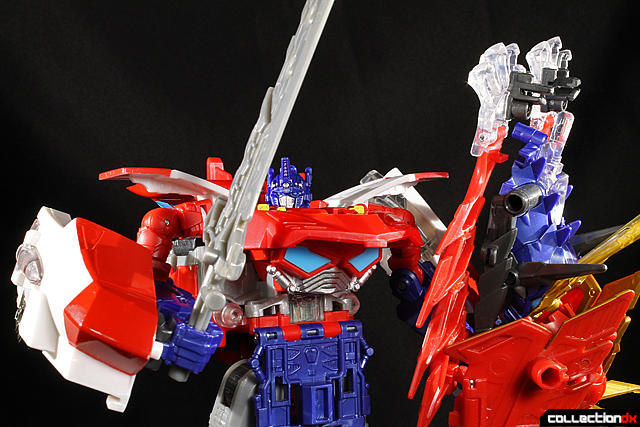 Or just go nuts and combine the two swords in one hand. 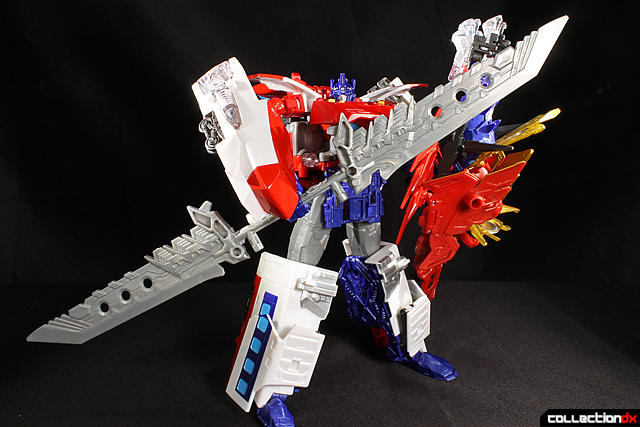 And that's not all folks. Oh no. You can seperate them and attach each one to the back. Heres the smaller of the two Kabutos. 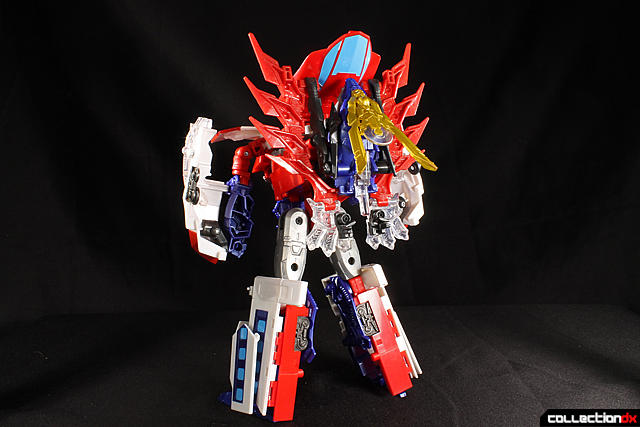 Here's what it looks like from the front. I like how the wings peek out of the back. 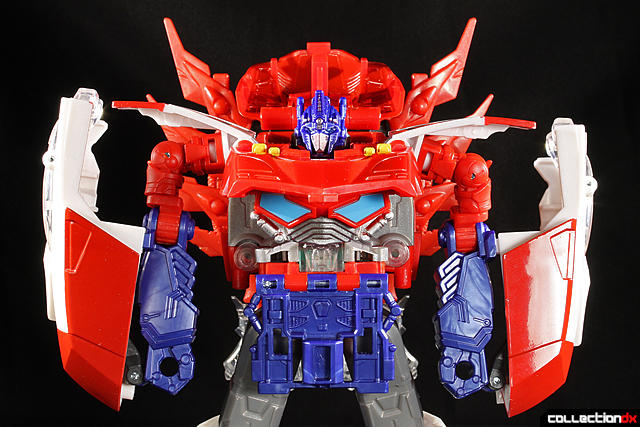 Here is the larger Kabuto. Notice how the figure still stands with all that weight in the back. I did have to lean him slightly forward though. 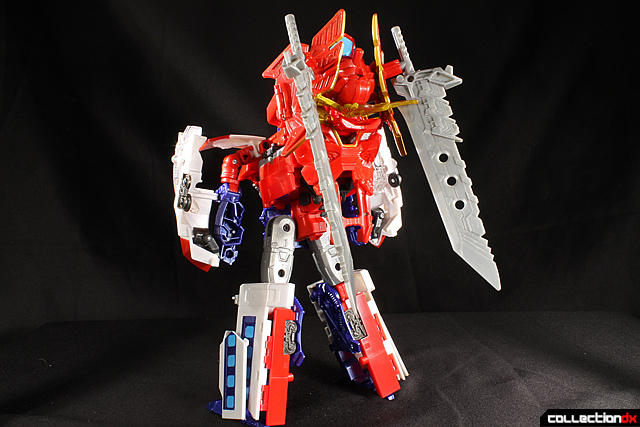 From the front, the larger Kabuto is barely visible. 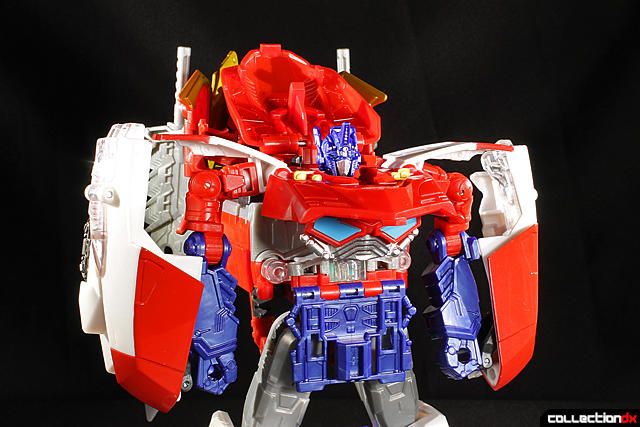 I said "More on that later" a couple of times when I mentioned the Kabutos and combination feature. The Kabutos being the helmets that they are, are used as helmets when combined with other robots that are available in the GO! line of Transformers. One would be the G01 Kenzan and the other being the G05 Gekisoumaru. Both of which will hopefully be available for me to review in the future so that I may show off the combined mode. Having said that, I can honestly recommend this as a stand-alone figure if you can't or don't want to purchase the other two figures.

I just dont dig the robot mode proportion..Everything seems off.

I was going to argue otherwise but yeah you're right. Head and arms too small, legs too big/long.
It does look odd!